Table-top board game retailer Funagain Games has announced that CEO Jeff DeBoer will be voluntarily stepping down from his position at the request of his employees after the company received an outpouring of complaints regarding a series of “sexist” social media posts made by the now-former executive. 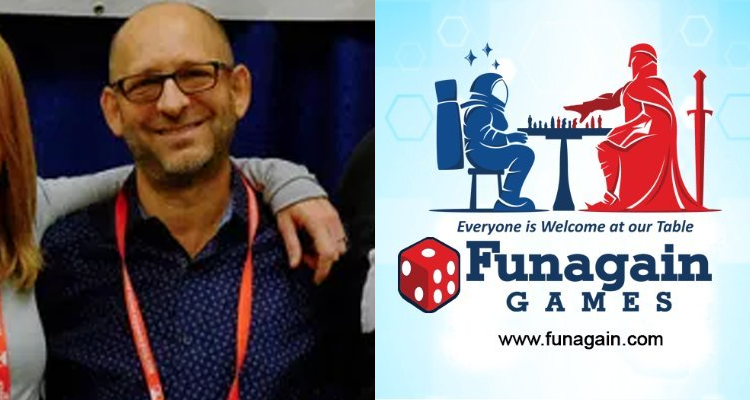 Following the January 17th announcement that Ion Games Design would no longer publish any new essays written by Sierra Madre Games division’s founder and lead designer Phil Eklund alongside new releases, made in response to a wave of recent outrage directed towards Eklund over essays and footnotes published alongside previous games, both the indie game developer and the controversial designer himself became the talk of tabletop social media communities.

One such community was that of Heavy Cardboard, a “a fortnightly podcast (& YouTube channel) dedicated to the discussion and enjoyment of heavier board games,” whose host Edward Uhler informed the show’s audience that due to the partnership between their show and Ion Games Design, “this [situation] has brought things to a head recently & forced me to consider what I think is the best course to follow going forward.”

“I don’t believe that giving Phil’s repugnant views a platform going forward would be correct,” said Uhler. “So I’m calling on Ion to, in the future, not include Phil’s essays/footnotes/etc. in forthcoming games.

“I have an agreement with Ion to feature a number of their games, some of which include Phil Eklund’s designs,” he continued. “I plan to honor that agreement. However, I also am going to hold them accountable to make these changes. But I’m also going to use my influence to try and further that goal so they do not continue to give Phil’s ideology an official platform.”

“If, at the end of the current agreement, Ion does not follow through with what they have pledged to do and/or they continue to give Phil an official platform from which he can espouse his odious views, then Heavy Cardboard will not remain a partner with Ion,” Uhler concluded. 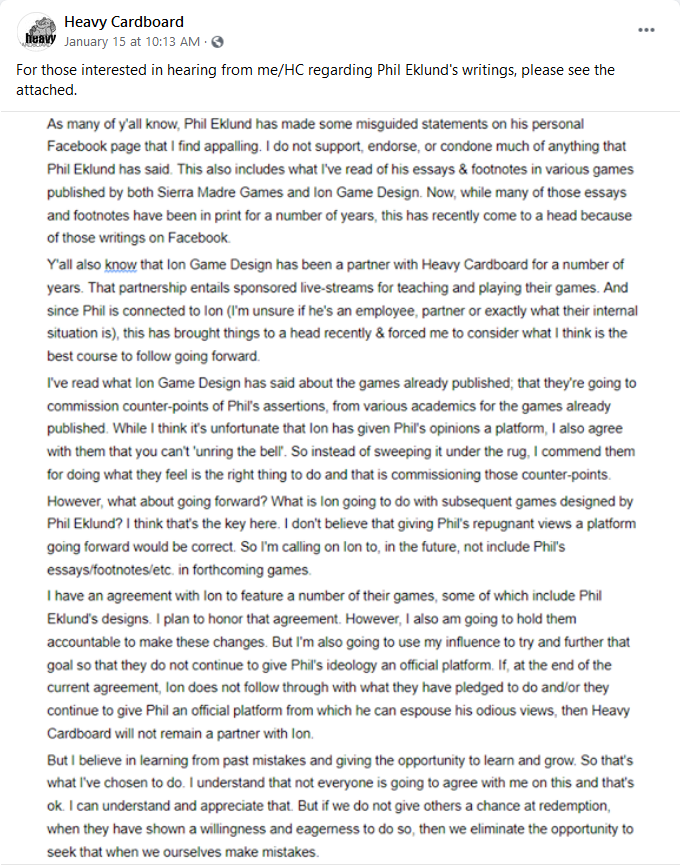 As was the case with Eklund’s original writings, Uhler’s post sparked a wave of discourse, drawing debate between those who supported Eklund’s deplatforming and those who believed the entire situation was being blown out of proportion.

Eventually, the conversation was joined by Eklund himself, who found himself “still wondering what unspecified cross i am being crucified on”.

Erroneously referring to Ion Games Design Director of Marketing and Public Relations Jessica Cassaday as “Edward [Uhler]’s wife”, Eklund stated that Cassaday had “told me it was about a 16 word sentence in footnote 84 of my boardgame Pax Emancipation.”

“From the way Jess clammed up when I asked, and from the way Edward in the past praised the thesis of the game in his own podcast, I got the impression that Edward was under heavy pressure from some cancel culture sponsor,” asserted Eklund. “In any case, it is a typical and cowardly, not to mention libelous, cancel culture tactic to smear someone with a suggestive label without explanation and then forestall debate by intimidation of my boss.”

Cassaday then fired back, telling Eklund that “You need to stop”, explaining “I am not Edward’s wife and I did not nor have I ever clammed up.”

“I told you I would speak to you more about this issue at such time that I was not caring for my four children as I was with them on a Sunday no less when you demanded my response,” explained Cassaday. “You do not dictate when I respond to you and you are out of line speaking of and to me this way.”

It was then that DeBoer joined the conversation, entering the fray of his own volition, to attempt to defend Eklund from Cassaday’s criticism.

“You are out of line speaking to the legendary PE that way,” wrote DeBoer, as seen in screenshots of his now-deleted posts provided by YouTubers Watch It Played. “Sorry you had such a bad day with your four kids? Really? I thought smaller families was the new awakening for our planet?”

“What were you thinking?” he continued. “And living with a man out of wedlock? Ok, that was my attempt to bring some humor to this conversation……lol…..slow down, dear…..” 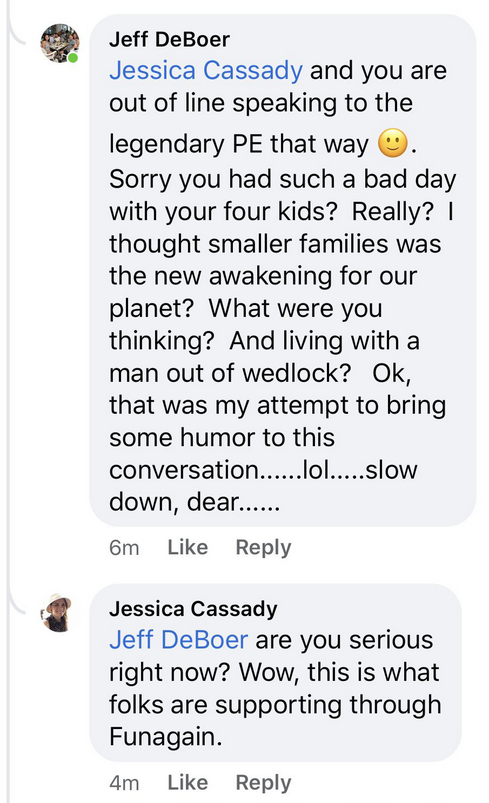 Cassaday responded writing, “are you serious right now? Wow, this is what folks are supporting through Funagain.”

Following this response, the former Funagain Games CEO suggested that she “re-read what you said and be a little more cordial….what is your beef? Come on, Jeff! Lighten up. Where is that cheery woman I know? Covid got your goat or something? It is okay….we will get through these stressful times but by not finding your center you are making it worse, imho.” 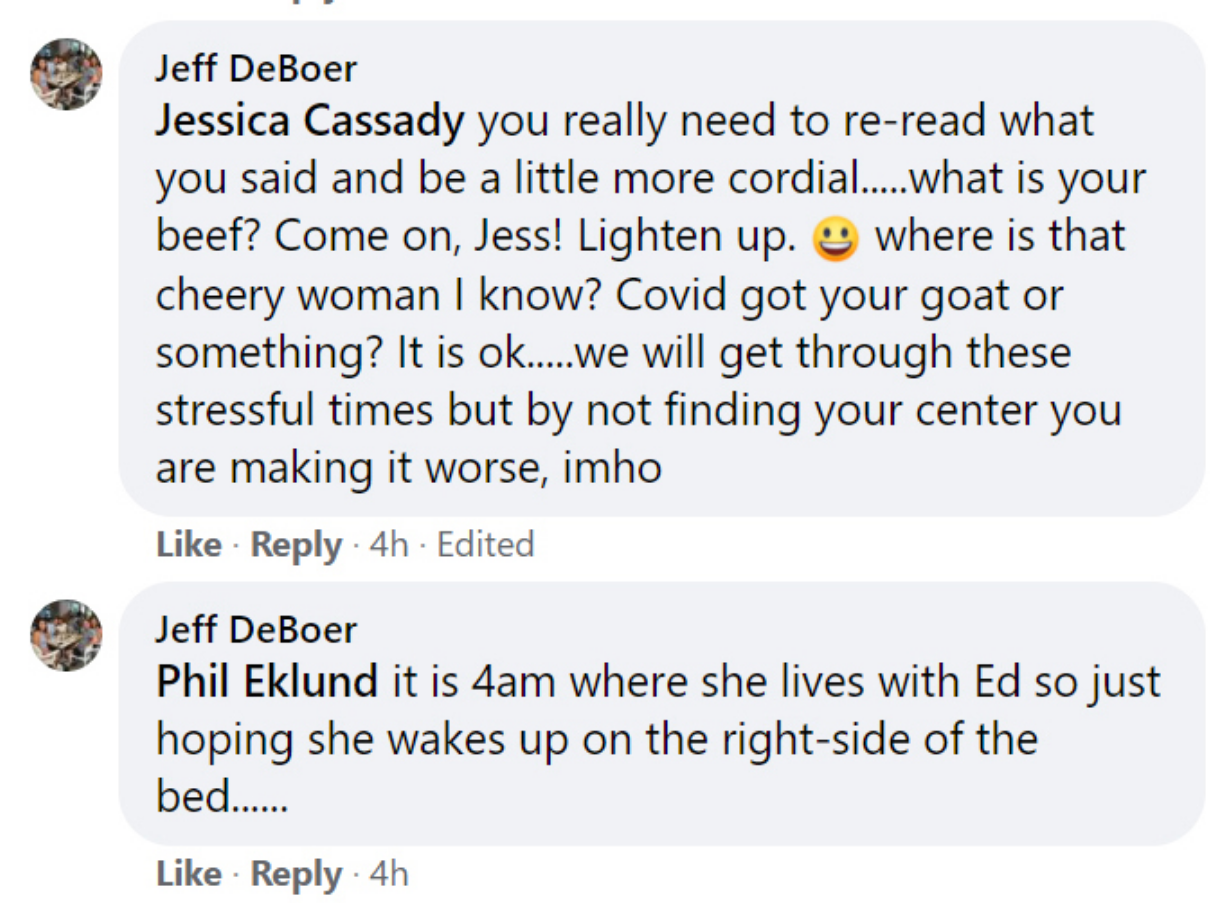 While Eklund and Heavy Cardboard’s community continued to discuss the issue, other fans brought Deboer’s comments to the attention of Funagain Games, who in turn issued a statement on Twitter declaring that “At Funagain Games, we condemn discrimination of any kind, be that based upon age, culture, gender identity, gender expression, social status, sexual orientation, religion, race, educational level, disability, mental health, ethnicity or physical appearance.”

Just two days after this first post, on January 21st, Funagain Games officially announced that DeBoer would be stepping down from his position as CEO, stating that “there is zero justification for his words, and it pains us to see the hurt he has caused.”

“We feel his words reflect poorly on our had-working and experienced team,” the company explained, “which most of the board game community does not know personally, since we are behind the scenes.”

They added, “We have been working diligently to support our excellent partners everyday and genuinely enjoy being a part of bringing games to your tables for the past 25 years. We do not want to see that jeopardized further.” 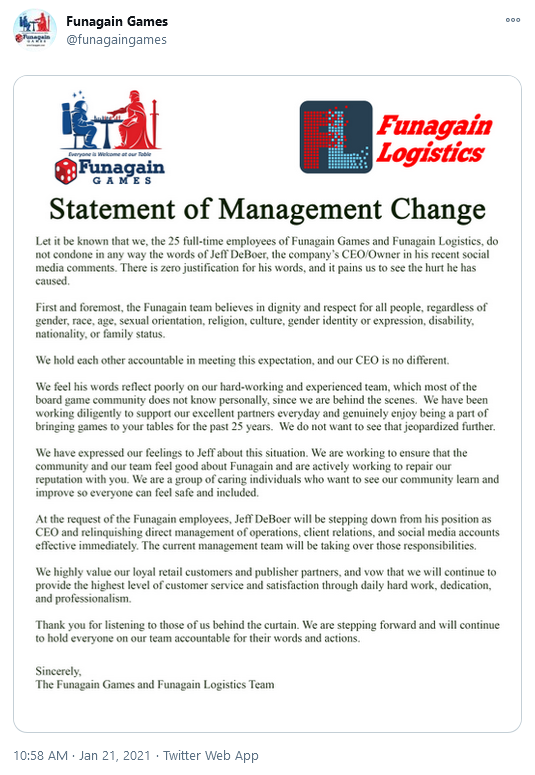 The statement continued, with Funagain noting that “we have expressed our feelings to Jeff about this situation” and “are working to ensure that the community and our team feel good about Funagain and are actively working to repair our reputation with you. We are a group of caring individuals who want to see our community learn and improve so everyone can feel safe and included.”

“At the request of the Funagain employees,” the statement then revealed, “Jeff DeBoer will be stepping down from his position as CEO and relinquishing direct management of operations, client relations, and social media accounts effective immediately,” with plans indicating that “the current management team will be taking over those responsibilities.” 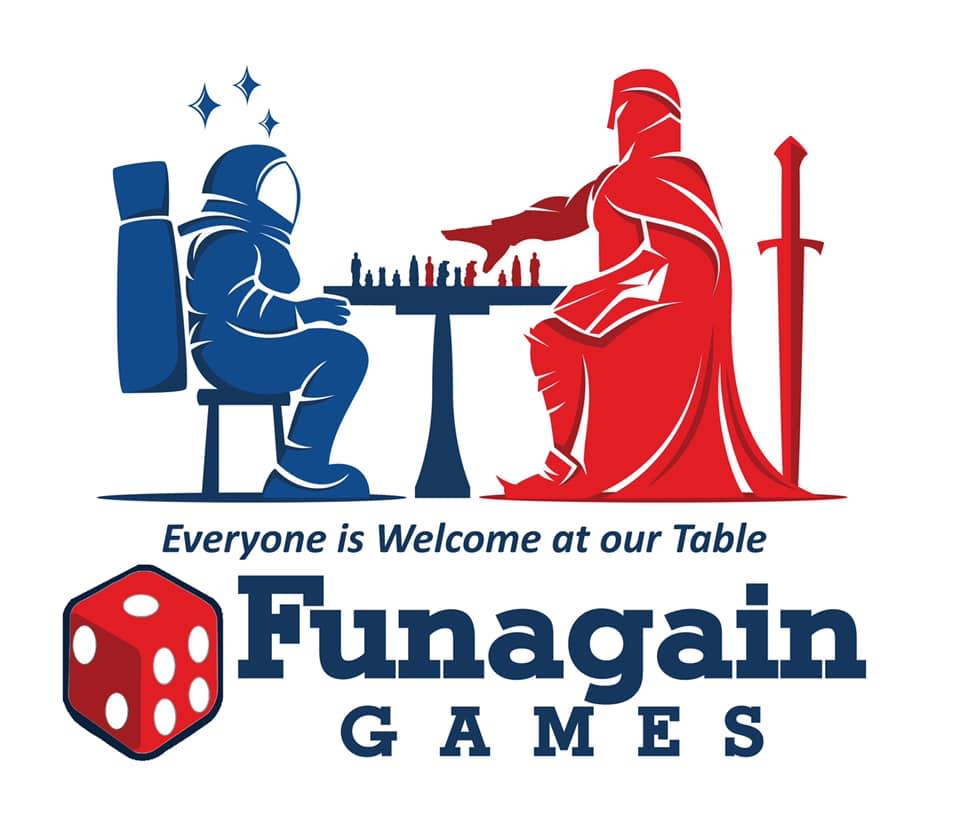 As of writing, though DeBoers is no longer acting CEO, it is unknown whether he retains any majority or ownership stake in the company.

What do you make of Funagain’s decision? Let us know your thoughts on social media or in the comments down below!