A spelling error and an attempted reference to an esteemed horror filmmaker seen in the artwork of the The Immortal Hulk’s latest issue has resulted in artist Joe Bennett facing accusations of anti-semitism. 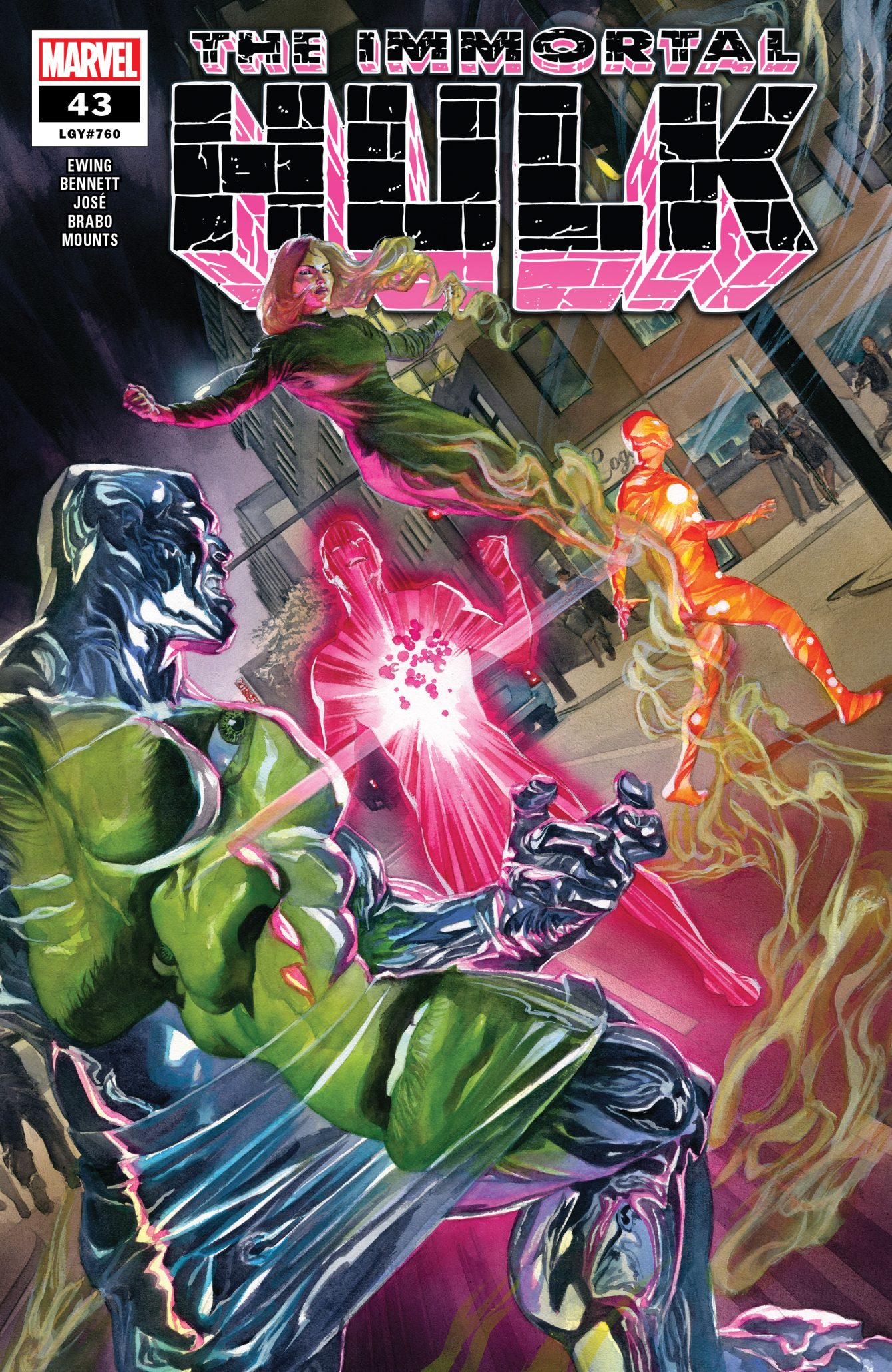 With the mental identities of Bruce Banner and the Devil Hulk having recently been imprisoned in the Below-Place by the Leader, The Immortal Hulk #43 finds the body of Marvel’s resident ticking time bomb currently inhabited by the personas of both Joe Fix-It and the Savage Hulk, the latter suffering from a depletion of gamma energy following the aforementioned confrontation with his archenemy.

Wanted by Gamma Flight for the accidental decimation of an entire town and desperate to survive, Fix-It turns to theft, eventually fencing a set of illicitly purchased diamonds in order to acquire some quick cash to help him get by on the streets of New York City. 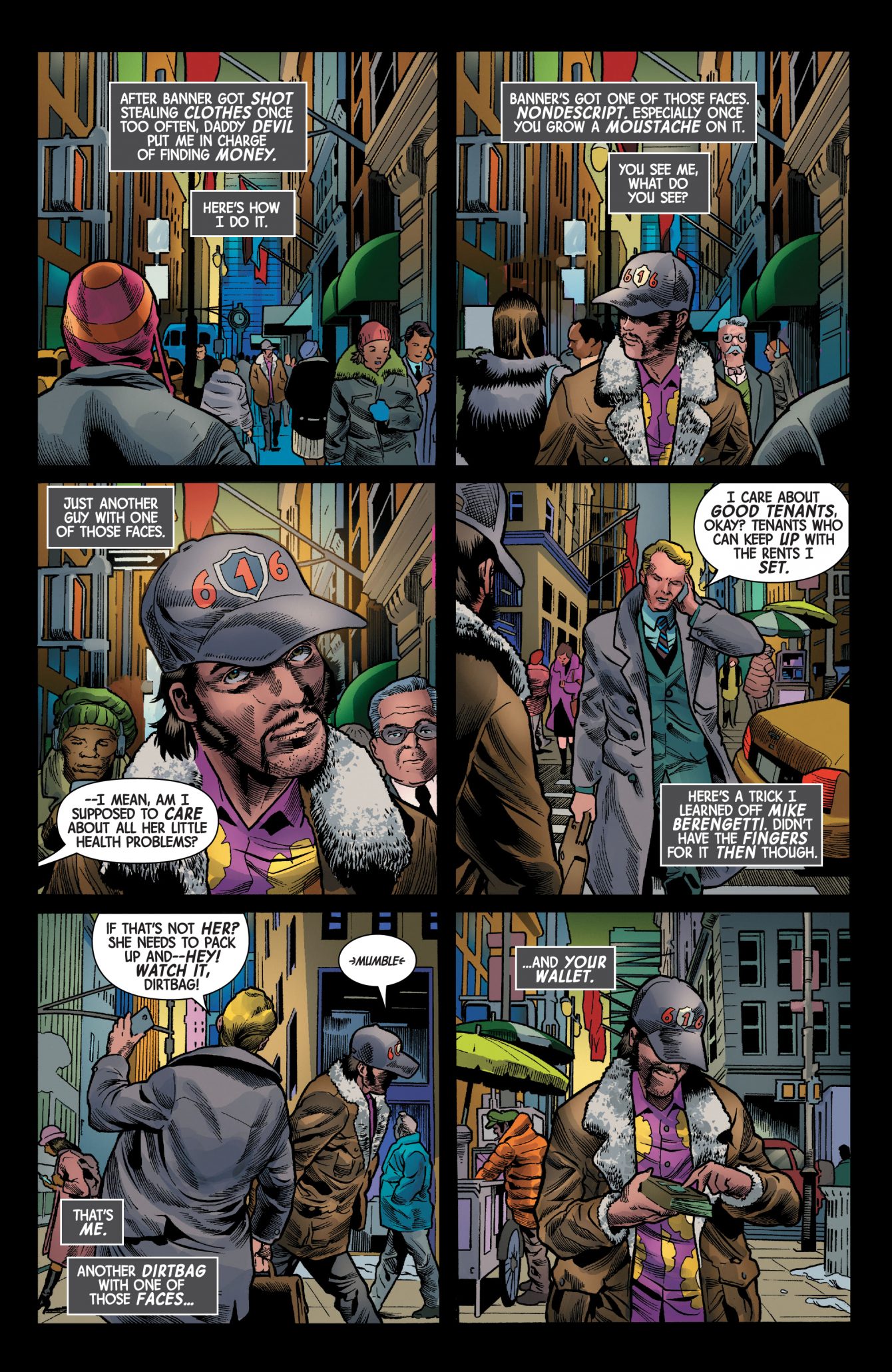 The artwork that landed Bennett in hot water appears during Fix-It’s scamming of a jewelry store.

In one panel, though the artwork was assumedly meant to read ‘Cronenberg [Boys’] Jewelry’,the jewelry store’s name is unfortunately misspelled as “Cronemberg [a cutoff word presumably meant to read ‘Boys’’] Jewery”, with a Star of David being included underneath the shop’s name 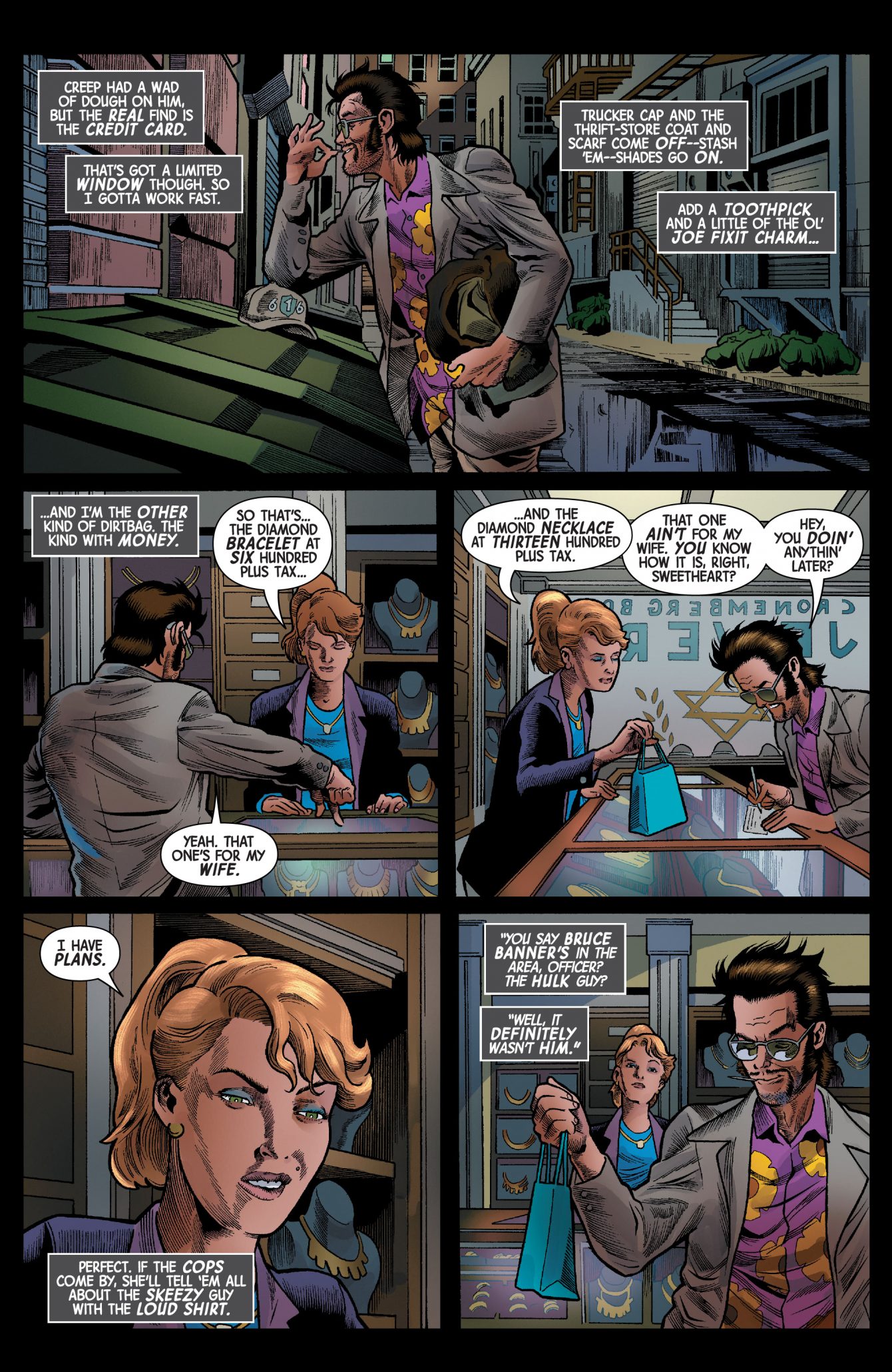 Intended as a nod to the classic horror director David Cronenberg, the ‘Cronenberg’s Jewelry’ is one of many storefront references included by Bennett throughout the issue, with others including Milgrom’s Books (named after former Incredible Hulk editor Al Milgrom) and Starlin’s Coffee (named after former Marvel artist and writer Jim Starlin). 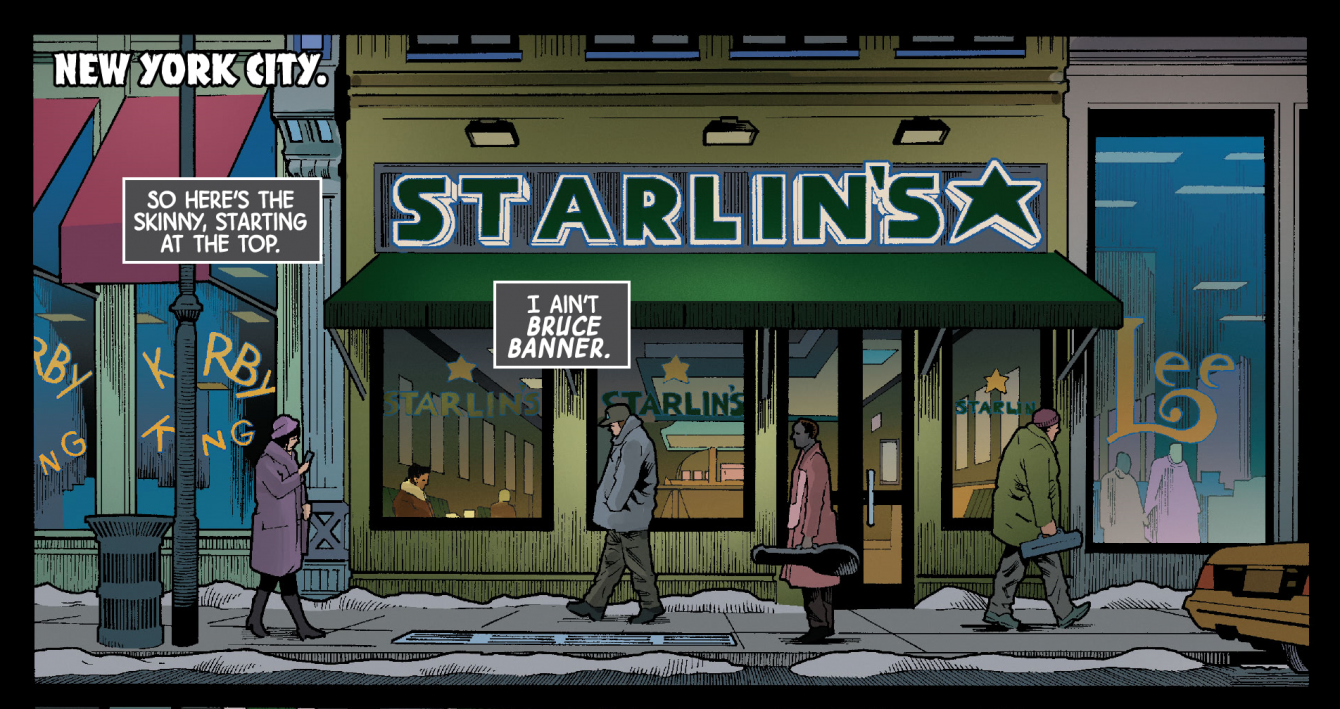 Following the issue’s publication, Bennett’s spelling error, along with its juxtaposition with the Star of David, found the artist being accused of anti-semitism.

“Even in the best possible interpretation, this is odd,” wrote ComicsXF author Zach Rabiroff. “The scene has otherwise no connection to Judaism or the Jewish ownership of the shop; there are no Jewish themes to which the comic is trying to point us. The only conceivable interpretation, to put it frankly, is that this is a visual play on the old and antisemitic trope of Jews running the diamond business: a centuries-old cliché rooted in stereotypes of Jewish merchants as unscrupulous profiteers willing to do business with shady criminals (which, indeed, the shop is doing in this scene).” 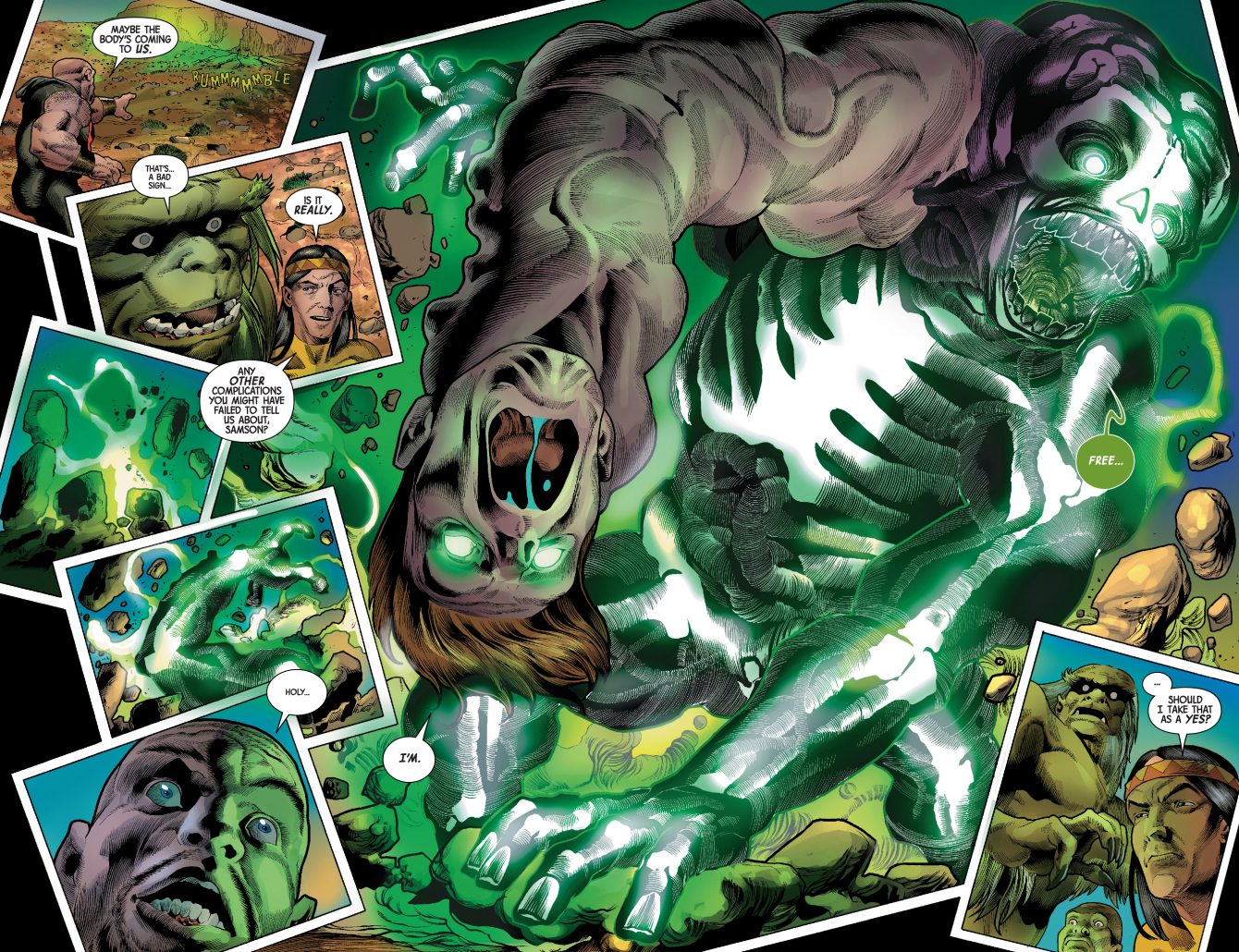 Tempting Fate and Callisto Six actress Amy Dallen, who previously praised The Immortal Hulk series, wrote that “This Immortal Hulk thing has broken my heart. I just keep thinking: I put that book in someone’s hands.”

“And thousands of people opened their new issues yesterday and got an anti-semitic background gag,” she continued. “That really happened. I’m still in shock.” 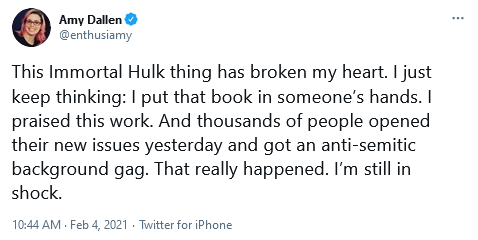 “There is no place in the comics industry for anti-Semitism like Joe Bennett is leveraging in IMMORTAL HULK,” asserted Comicosity editor Matt Santori. “It’s garbage. He’s garbage. And any comic company continuing to employ him is garbage.”

In the face of these accusations, when asked for comment on the backlash by CBR, Bennett issued an apology and explained that the artwork was the result of an “honest but terrible mistake.”

“I’ve been including references to famous horror directors to pay respects to the genre throughout the series, and in Immortal Hulk #43, I included a nod to David Cronenberg,” Bennett told the comic book news outlet. “The misspellings on the window were an honest but terrible mistake – since I was writing backwards, I accidentally spelled both of those words wrong.

“I have no excuse for how I depicted the Star of David,” he further apologized. “I failed to understand this troubling and offensive stereotype, and after listening to you all, I now understand my mistake. This was wrong, offensive, and hurtful in many ways. This is a mistake I must own, and I am sorry to everyone who I hurt by this. I am working with Marvel to correct this, and I am using this lesson to reflect on how I approach my stories and my work.” 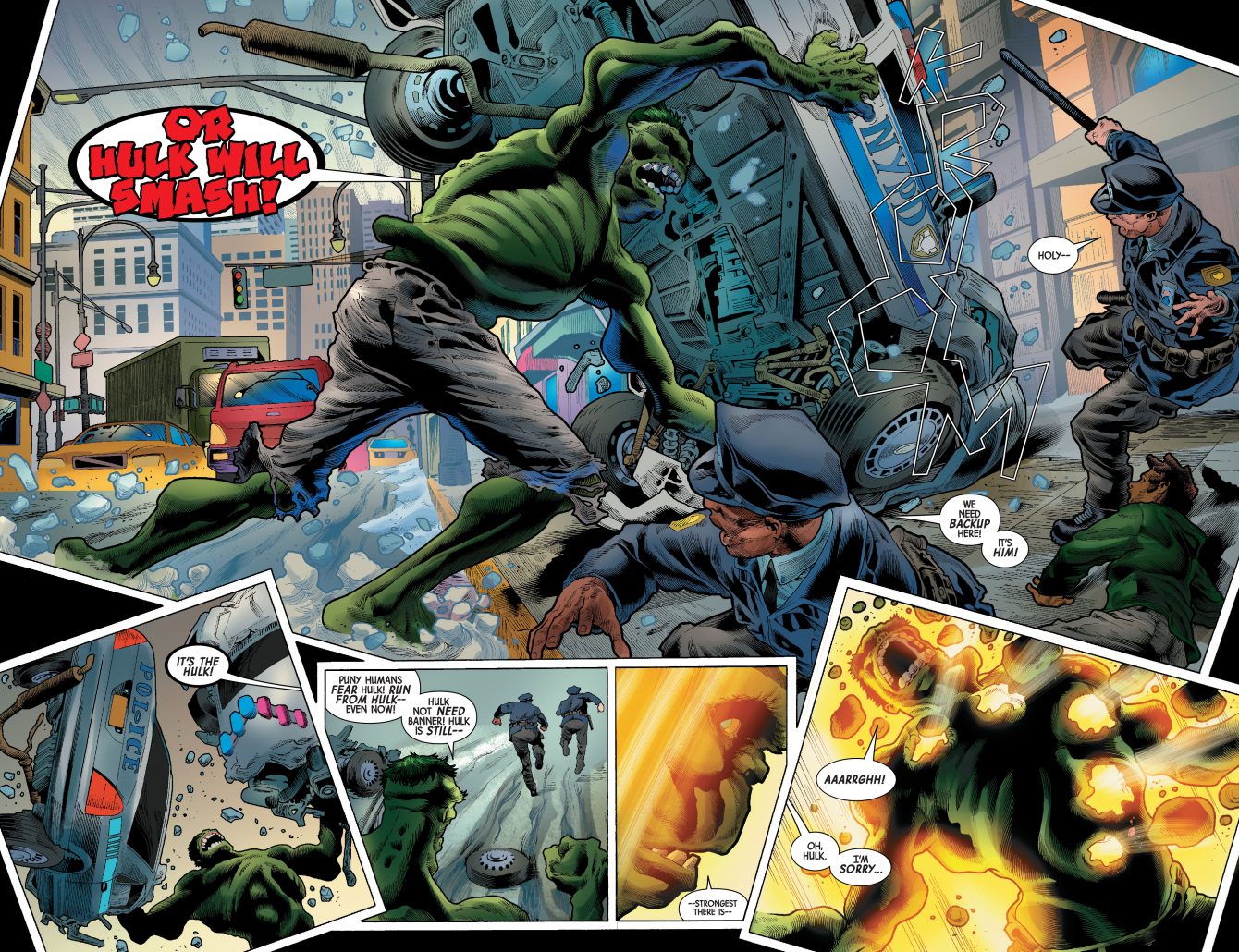 Adding to Bennett’s statement, a Marvel representative told CBR that the company “fully acknowledged this mistake was missed on our side as well” and confirmed that all future reprints of The Immortal Hulk #43 would feature corrected artwork.

The correction has already been made to the digital version of the issue, with the jeweler’s unique storefront having been replaced with a nondescript window, as confirmed by Cosmic Book News editor Matt McGloin. 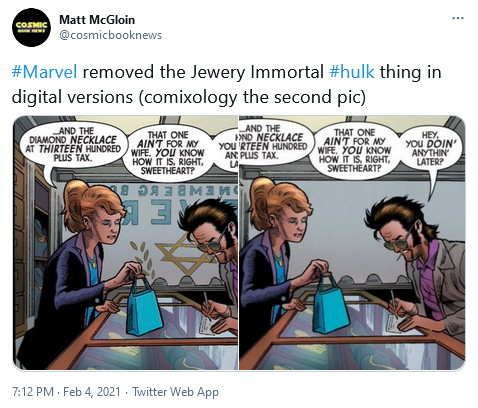 As of writing, series author Al Ewing has not commented on the situation.

What do you make of the accusations against Bennett? Let us know your thoughts on social media or in the comments down below!