In the latest episode on Fox’s long-running comedy show The Simpsons, “Panic on the Streets of Springfield”, Lisa gets acquainted with an imaginary friend that was based entirely on Quilloughby, an in-universe parody of renowned English musician Morrissey.

Voiced by Doctor Strange actor Benedict Cumberbatch, Quilloughby is an obvious poke at Morrissey, even being the former singer of an ’80s rock band called The Snuffs, an obvious poke at the real-life musician’s former band The Smiths. 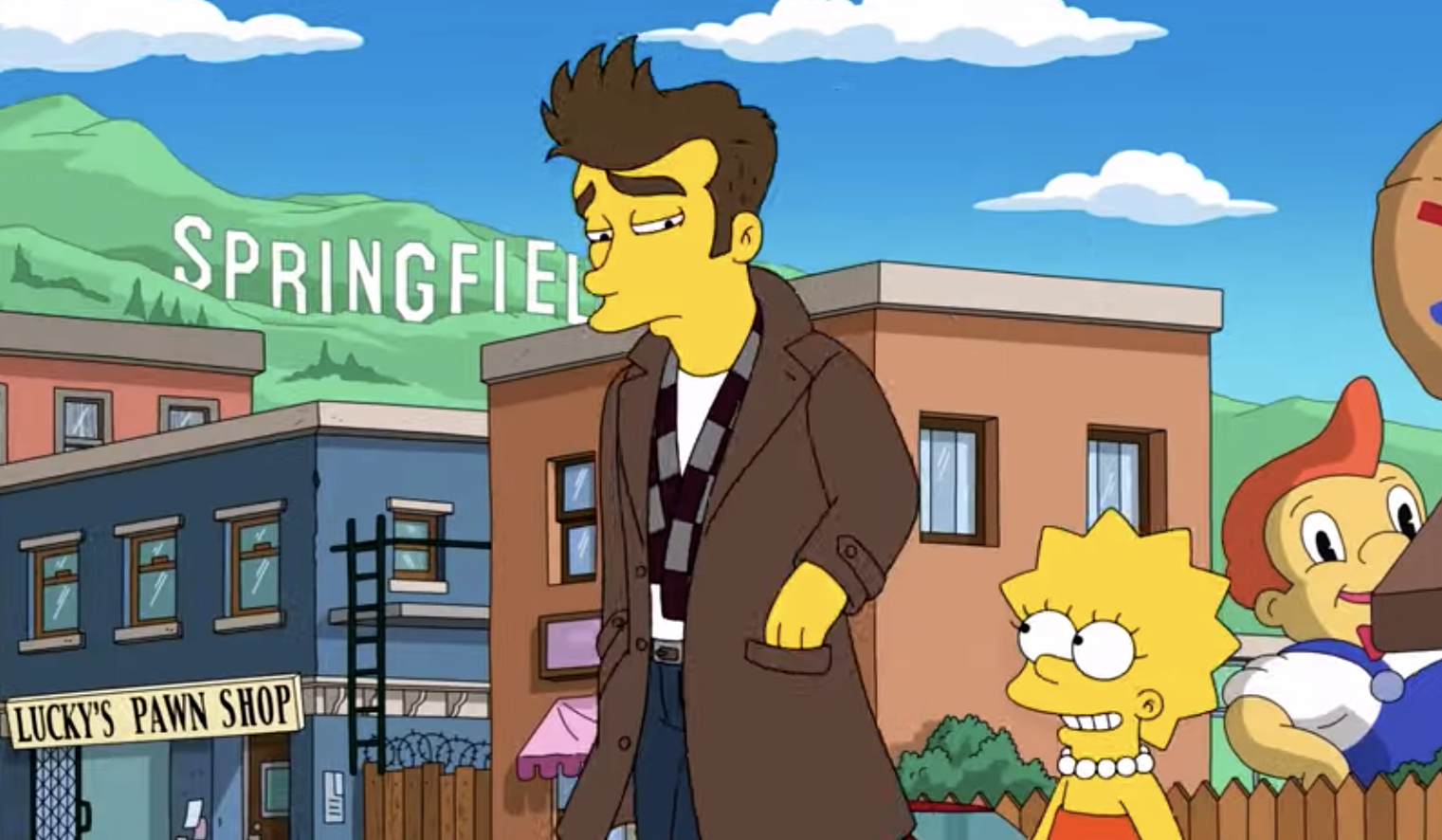 Related: The Simpsons Asserts ‘SJW’ Is A Term Only Used By “Right-Wing Trolls”

Throughout the majority of the episode, Lisa sees her imaginary version of Quilloughby as an idealized version of the musician’s former-self. However, when she finally gets to meet the real Quilloughby, she is disappointed by how the real-life version of her imaginary friend is not what she expected.

The parody didn’t bode well with the real-life Morrissey, as reflected in a lengthy Facebook post shared by the singer’s manager, Peter Katsis, who expressed his disappointment in the episode — going as far as to call The Simpsons “unapologetically hurtful and racist.” 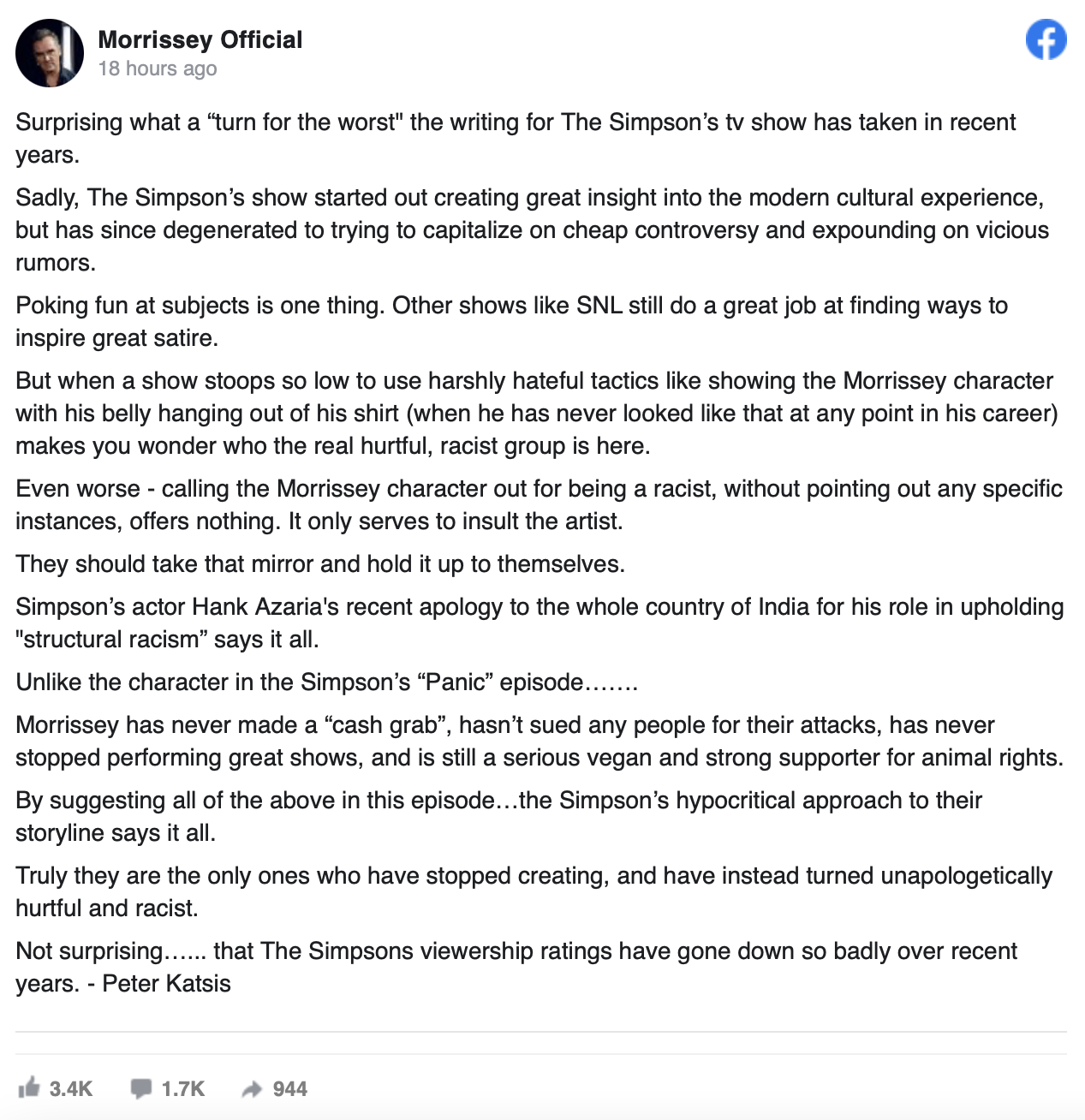 “Poking fun at subjects is one thing. Other shows like SNL still do a great job at finding ways to inspire great satire,” expressed Katsis. “But when a show stoops so low to use harshly hateful tactics like showing the Morrissey character with his belly hanging out of his shirt (when he has never looked like that at any point in his career) makes you wonder who the real hurtful, racist group is here.”

Morrissey’s manager then explained that The Simpsons had no right to call the English singer racist, suggesting that it the racist one in this exchange was actually the animated comedy.

“Even worse – calling the Morrissey character out for being a racist, without pointing out any specific instances, offers nothing. It only serves to insult the artist,” he added. “They should take that mirror and hold it up to themselves.” 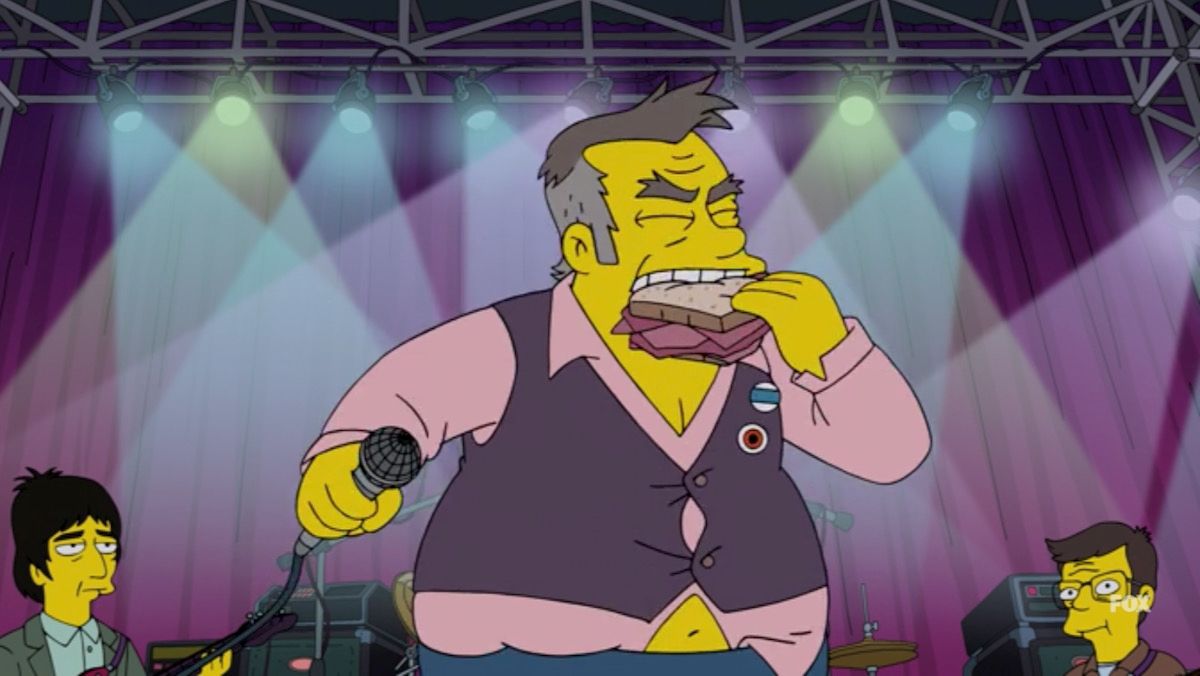 Amidst the controversy that The Simpsons has been involved in recently, on account of beloved Indian American character Apu being deemed offensive by a vocal minority of SJWs, Katsis also takes the opportunity to blame the show of practicing “structural racism.”

“Simpson’s actor Hank Azaria’s recent apology to the whole country of India for his role in upholding “structural racism” says it all,” Katsis explained. 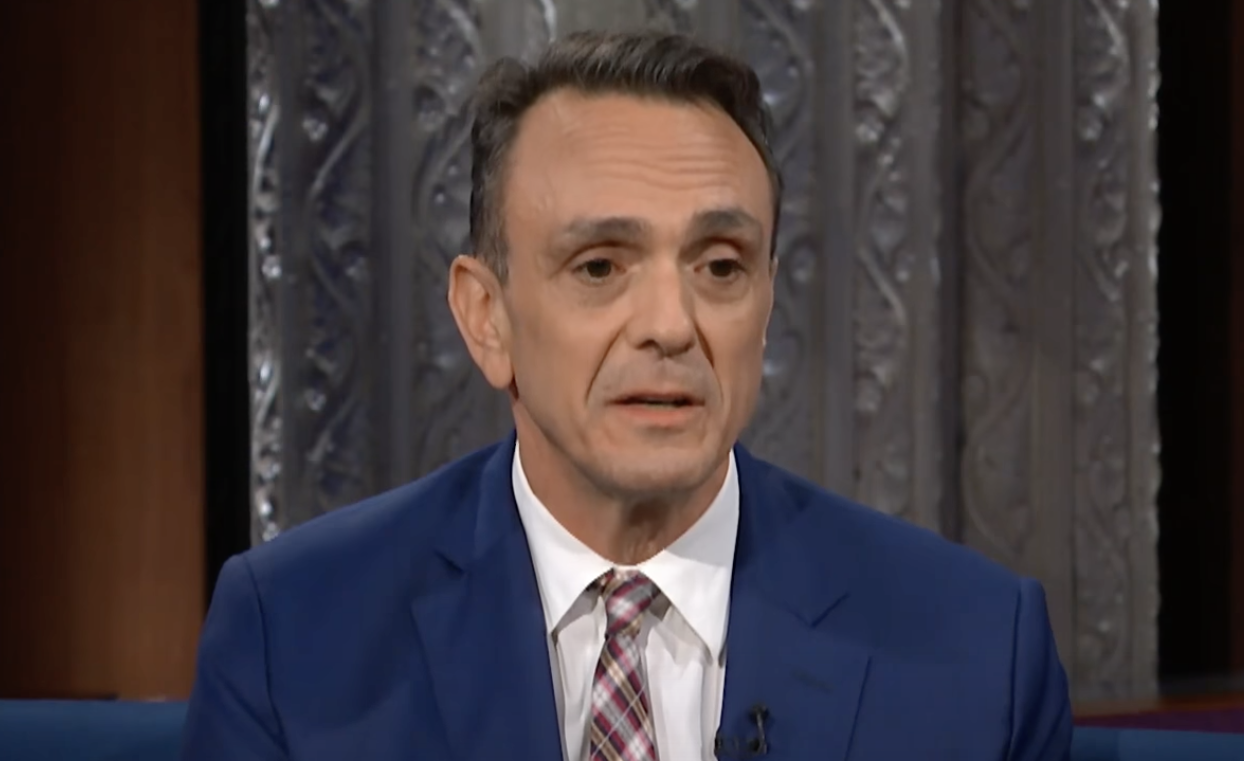 Related: The Simpsons Actor Hank Azaria Bends The Knee, Wants To Apologise To Every Indian In North America Over Portrayal Of Apu

“Unlike the character in the Simpson’s ‘Panic’ episode…….Morrissey has never made a ‘cash grab’, hasn’t sued any people for their attacks, has never stopped performing great shows, and is still a serious vegan and strong supporter for animal rights,” added Katsis.

Going on to refer to The Simpsons as “unapologetically hurtful and racist”, Katsis then attributed the show’s low viewership ratings to a lack of creativity and a hypocritical apporach to storytelling. 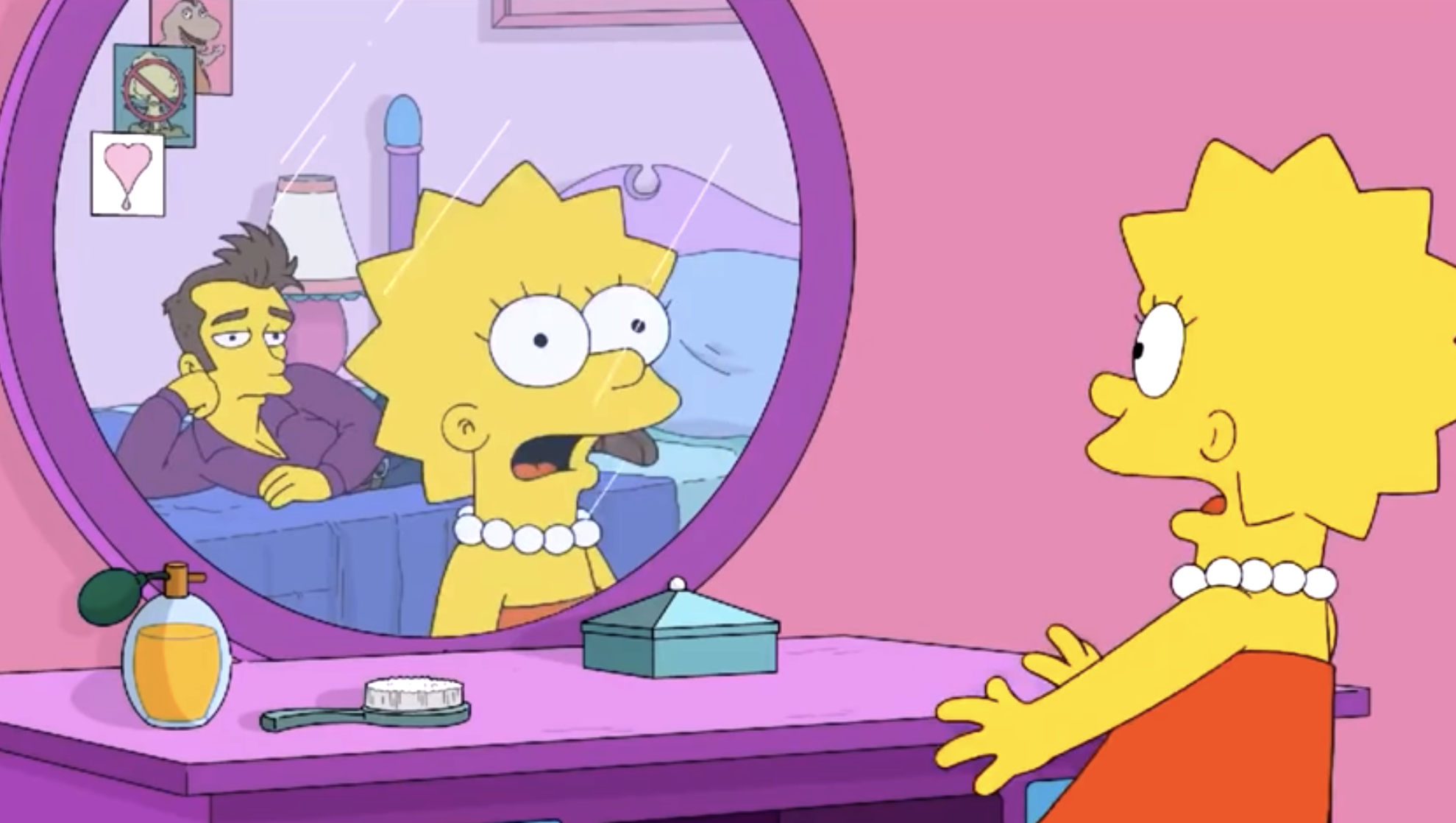 “By suggesting all of the above in this episode…the Simpson’s hypocritical approach to their storyline says it all. Truly they are the only ones who have stopped creating, and have instead turned unapologetically hurtful and racist,” expressed Katsis.

“Not surprising…… that The Simpsons viewership ratings have gone down so badly over recent year,” Morrissey’s manager concluded.

What do you make of the statement issued by Morrissey’s manager? Is this yet another case of “pot calling the kettle black” for The Simpsons? Sound off your thoughts in the comments section down below or on social media.