Shang-Chi actor Simu Liu deleted his tweet making fun of singer Nicki Minaj after a number of users on Twitter took issue with the tweet following the release of Marvel’s first Shang-Chi trailer.

The tweet, which Liu wrote in November 2012, read, “I thought I was at a nicki minaj concert for 20 minutes before I realized I was just watching a homeless man yell at a pigeon….”

He followed that up announcing he was deleting the tweet. He simply wrote, “Deleting!”

It really shouldn’t come as a surprise that Liu deleted the tweet.

The actor has made it clear he’s a believer in woke culture. In fact, he’s one of the more radical believers in the way of the woke. 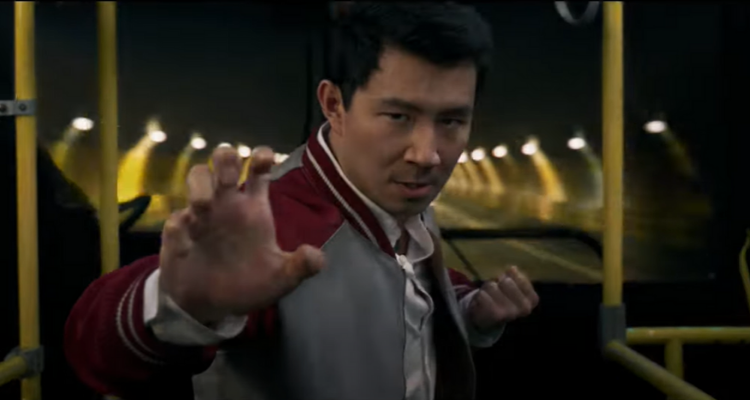 Back in June 2020, the actor called for the defunding of police.

He wrote, “Over the last few days I went from empathetic and sad to just plain angry. Defund it. Defund it and make way for a new system that doesn’t prey on the lives of the underprivileged.” 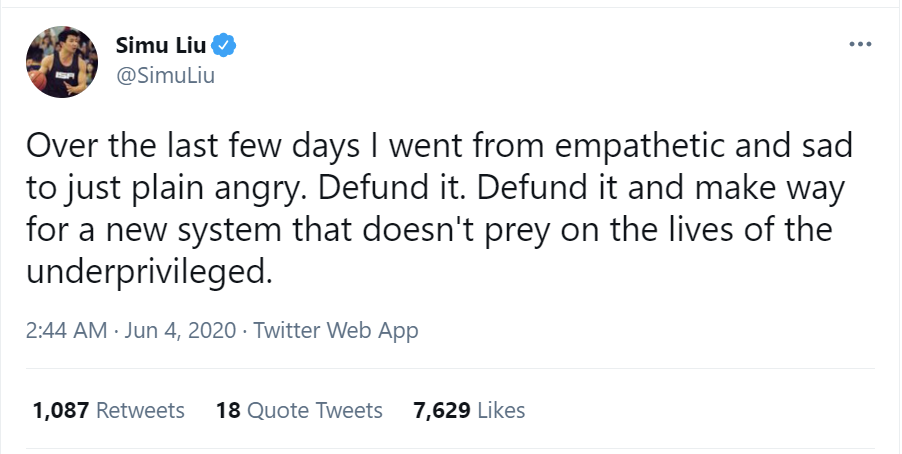 Not only does he want the police completely defunded and eradicated, but he also believes in systemic racism.

He tweeted, “Super proud of my parents for watching the YouTube video I sent about systemic racism and also proactively educating themselves!”

“Yes, my WeChat profile picture is me in a tux. I think it gives off a very classy vibe and I’m not interested in your judgment kthx,” he added. 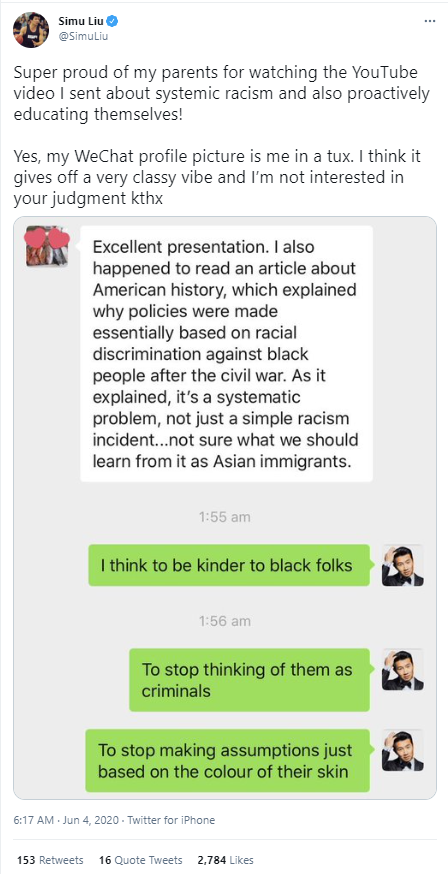 He would go on to tweet, “THE BAR IS SET TOO GODDAMN LOW.”

He concluded the tweet, “A SYSTEM THAT CONDONES ALL OF THIS IS BROKEN.” 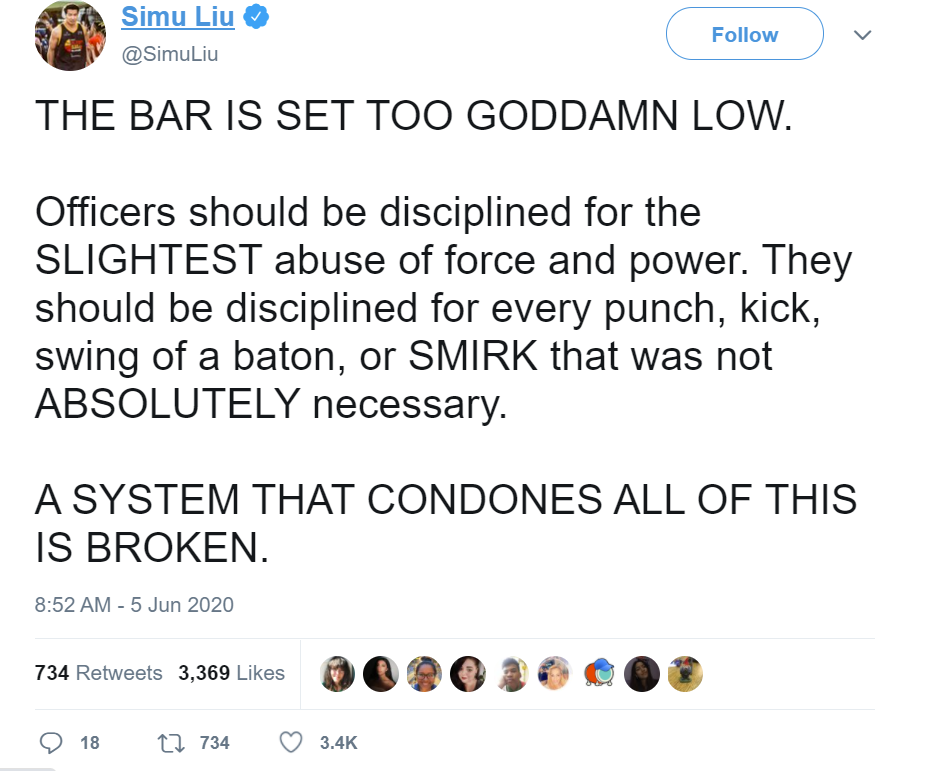 The actor would also reveal what his vision for a world without police looks like.

He tweeted, “whAt wiLl We RePlAcE ThE pOLiCe WiTh?!?!” 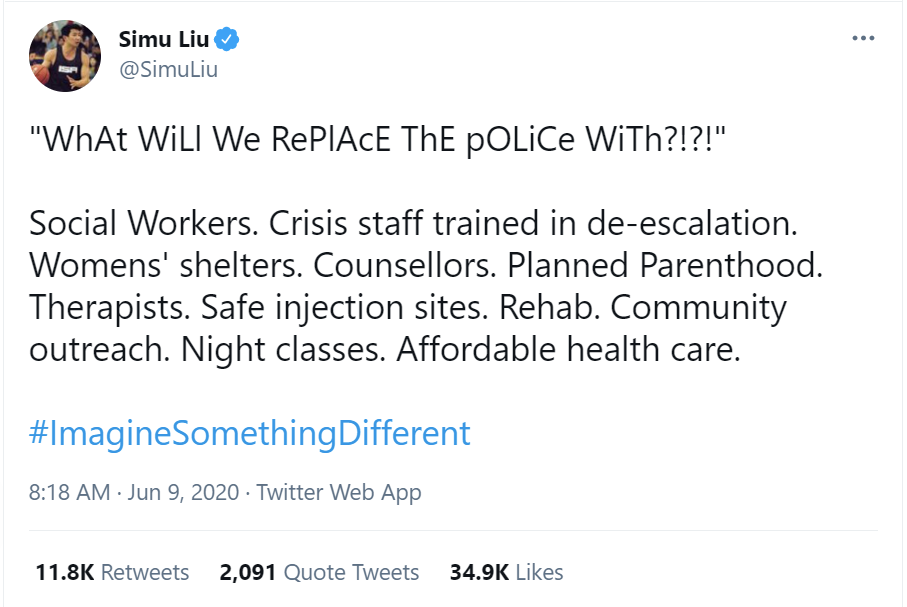 Interestingly, he would then back pedal saying that he’s not actually trying to abolish the police citing a Vox article written by Emily VanDerWerff.

Liu tweeted, “Welcome cynics and conservative trolls! Glad you’re dropping by. While you’re here, please take a gander as to what abolishing the police actually looks like. Spoiler Alert: it doesn’t mean absolutely no police anymore!” 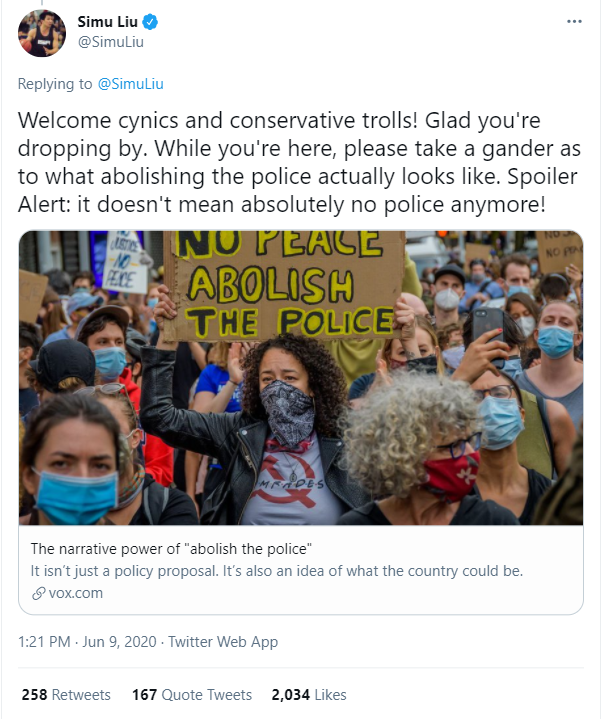 In the article VanDerWerff admits she has no clue about what she is actually writing about.

Seriously, she writes, “I’m not even really here to tell you that the police should be abolished — I’m no policy expert. But a lot of people I tend to agree with on other questions of sociopolitical interest, people who know what they’re talking about, think doing so, or at least significantly reducing the power of the police and reimagining their function, is probably a good idea.”

She writes, “But if such a drastic approach seems so wild as to be impossible, don’t think about “abolish the police” as merely a policy proposal, though it is that.”

Does it really surprise you that someone who would go to these lengths to advocate for the abolishment of police would delete a funny joke about Nicki Minaj?