A tweet from Respawn Entertainment correcting Polygon on their Titanfall II lore in an article discussing the newest Apex Legends hero, Valkyrie, has sparked backlash from critics on social media who found the developer’s tone to be ‘inappropriate.’

On April 19th, Respawn Entertainment introduced Apex Legends’ newest character, Valkyrie, with the release of the latest entry in their Stores From The Outlands series of animated shorts, Northstar.

A Titan pilot seeking to enter the Apex Games, Valkyrie holds the most direct connection to the events of Respawn Entertainment’s preceding Titanfall series, whose events take place in the same setting as Apex Legends.

Real name Kairi Imahara, Valkyrie is revealed to be the daughter of Titanfall II antagonist Viper, who has spent her life attempting to come to terms with her father’s death at the hands of the game’s protagonist, Jack Cooper, following a climactic boss battle aboard the IMS Draconis transport ship.

Despite being one of the major moments of Titanfall II, even resulting in players being awarded the Defanged achievement, the events of Viper’s death eluded Polygon, whose coverage of Valkyrie’s announcement claimed that the cause of her father’s death was unknown.

“As we find out, her father was once the pilot of a Northstar-class Titan but died, possibly in the Apex Games himself,” wrote Polygon’s Austen Goslin. “Whatever the cause of death, Valkyrie blames Titanfall 2 antagonist Kuben Blisk, who knew Valkyrie (and her father) when she was a child known as Viper.”

Eventually catching wind of Goslin’s egregious lack of journalistic due diligence, Respawn Entertainment responded to Polygon’s tweet linking to the article with a blunt request that the news outlet check their sources.

“Hmmm, we suggest you check your sources,” wrote Respawn Entertainment, who then provided a link to the Steam page for Titanfall II and asserted that “here’s a great place to start”. 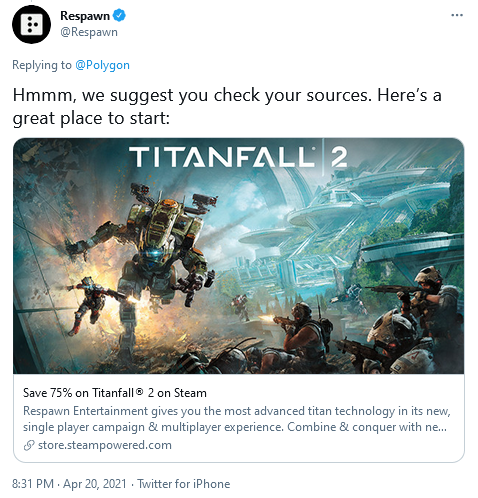 Despite being completely in the right to correct Polygon’s article, Respawn Entertainment soon found themselves facing backlash on social media, as a number of users, particularly journalists, responded to the developer by criticizing the ‘tone’ of their tweet, making excuses for Goslin’s poor reporting, and as always, invoking Gamergate.

“This is not how you issue corrections to the media. Whoever signed off on this knows/should know this, and they did it anyway,” wrote Haywire Magazine writer Leigh Harrison. “Unprofessional in any setting. Unforgivable and potentially dangerous in the cesspit of games discourse.” 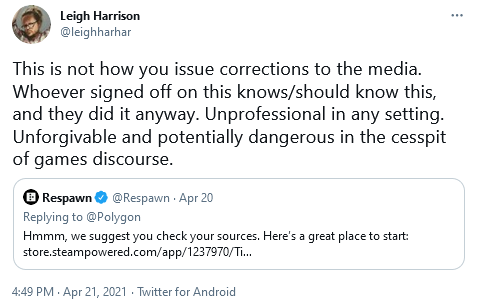 “if you’re a brand manager and a part of your social media strategy is CDPR-style shit like this, your games have gone way the hell down my priority list,” wrote The Young Folks games writer Travis Hymas. “Just like tweet GG shit if you’re gonna be like this, be goddamn honest at least.” 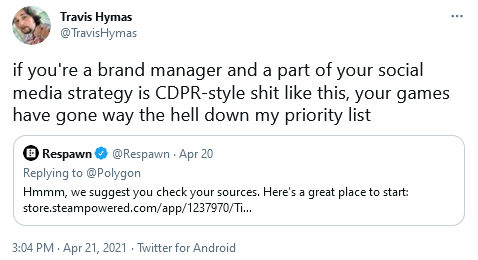 In defense of Polygon, Twitter user @RunDaltonRun pushed back, “Sometimes writers have to write about news items that relate to games they didn’t play. You can’t expect a writer to know every single thing about every single game. Also, it’s a story about a fictional character and plot, not like an important IRL event or topic.” 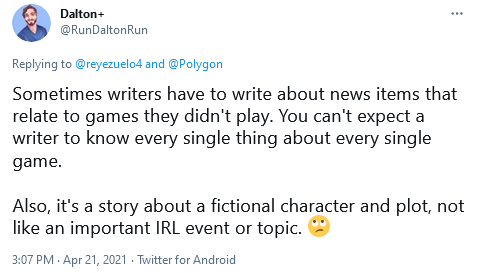 “I’m going to assume that they did do research and just had a misunderstanding or made a mistake. It happens,” he added. “But having Respawn reply in the way they did over something like this is grossly unprofessional and way more egregious than an error in the article, IMO.” 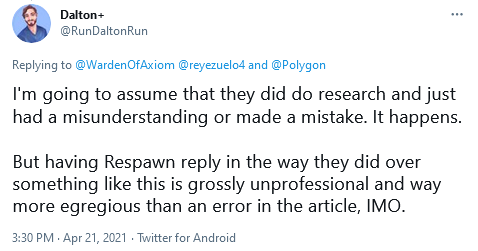 Respawn Entertainment’s response, which was highly lauded by fans, further caught the attention of Polygon Editor-in-Chief and Co-Founder Chris Plante, who dishonestly framed the developer’s justified response as ‘negging.’

“I hoped that official developer account’s negging people because they don’t know every piece of video game lore would die out post-GamerGate but I’m not surprised we still see this shit,” wrote Plante. 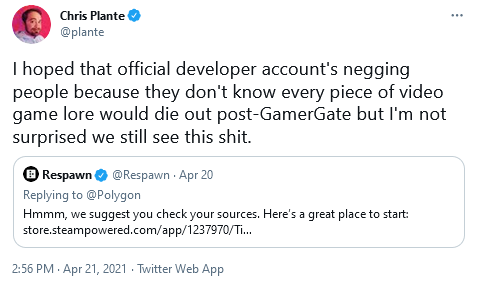 Despite the claims of these critics, the incredibly positive fan reaction to Respawn Entertainment’s tweet and the success of such brands as Wendy’s, a bit of well placed snark, especially in a justifiable situation, is typically welcomed by most audiences.

Polygon’s article has since been “updated to correct relevant Titanfall II lore,” with the news outlet removing the speculation concerning Vipers death. Now, the article simply notes that he died, as to avoid direct Titanfall II spoilers.

What do you make of the backlash against Respawn Entertainment? Let us know your thoughts on social media or in the comments down below!