Spawn and Ice Age franchise actor John Leguizamo was fairly disappointed to see that “Latinx” artists were not recognised by The Academy during the recent Oscars ceremony, going as far as claiming that the term “people of colour” has been weaponised in order to erase Latinos more effectively.

Leguizamo decided to share his frustration with his followers on Twitter, as he thought that it was unfair to see that no Latinos were amongst the artists that had been nominated in a major category at this year’s Academy Awards. 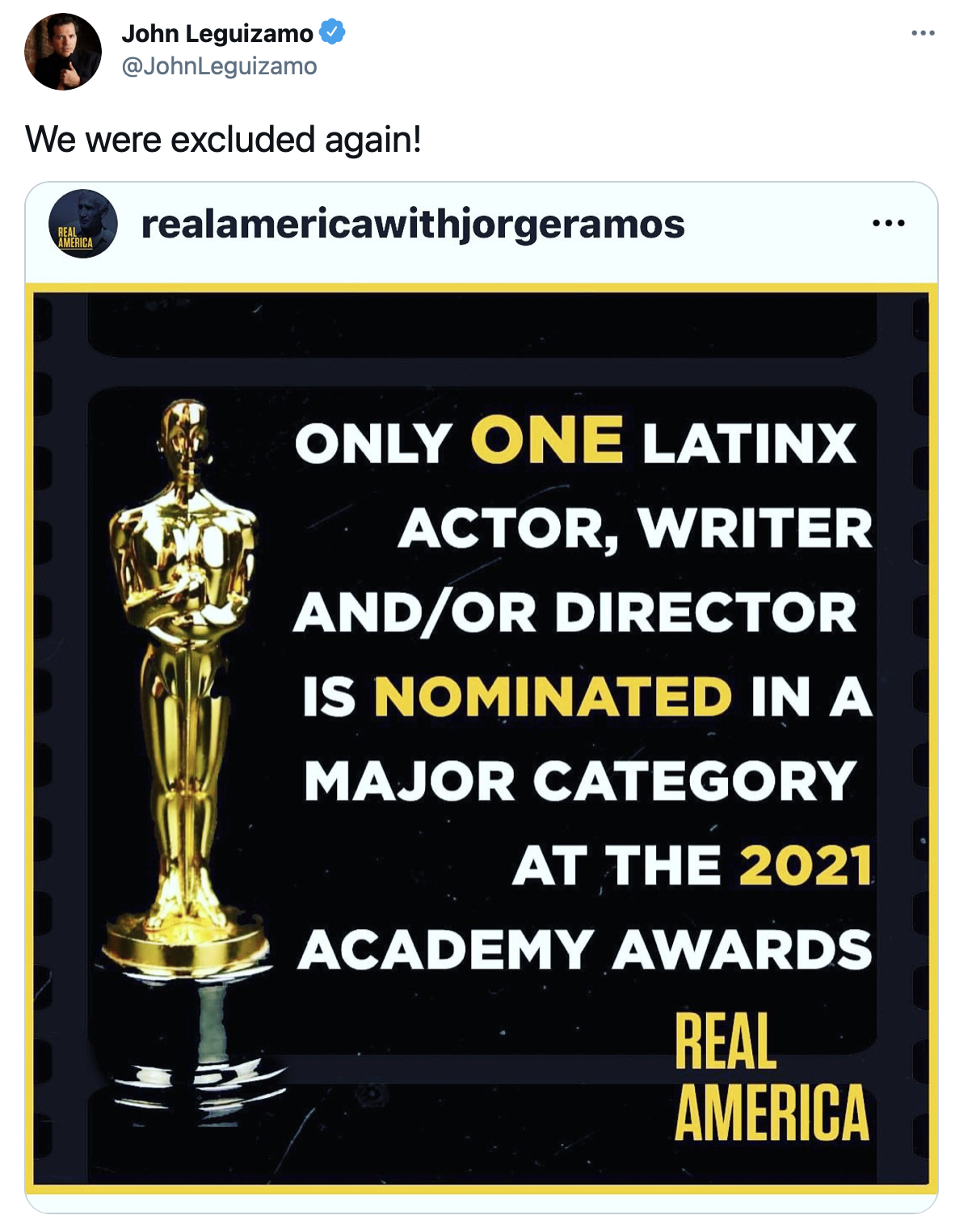 “We were excluded again!” reads the first post shared by Leguizamo on Twitter, which was made in a reply to an Instagram story posted by the official Real America with Jorge Ramos account that stated “only one Latinx actor, writer, and/or director is nominated in a major category at the 2021 Academy Awards.

Real America with Jorge Ramos’ Instagram post argued that Latinos are not given a fair chance when it comes to being represented by the Academy, despite the 2021 ceremony being regarded as “the most diverse in history.”

“The 2021 #Oscars are being hailed as among the most diverse in history- with one notable exception. Latinxs are underrepresented, continuing a record of lack of recognition at the Academy Awards,” reads the post, referencing Benicio Del Toro’s 2000 Best Supporting Actor Oscar win for his role in Traffic. “Panamanian-American director Shaka King is the only Latinx actor, director, or writer nominated in a major category at this year’s Academy Awards.” 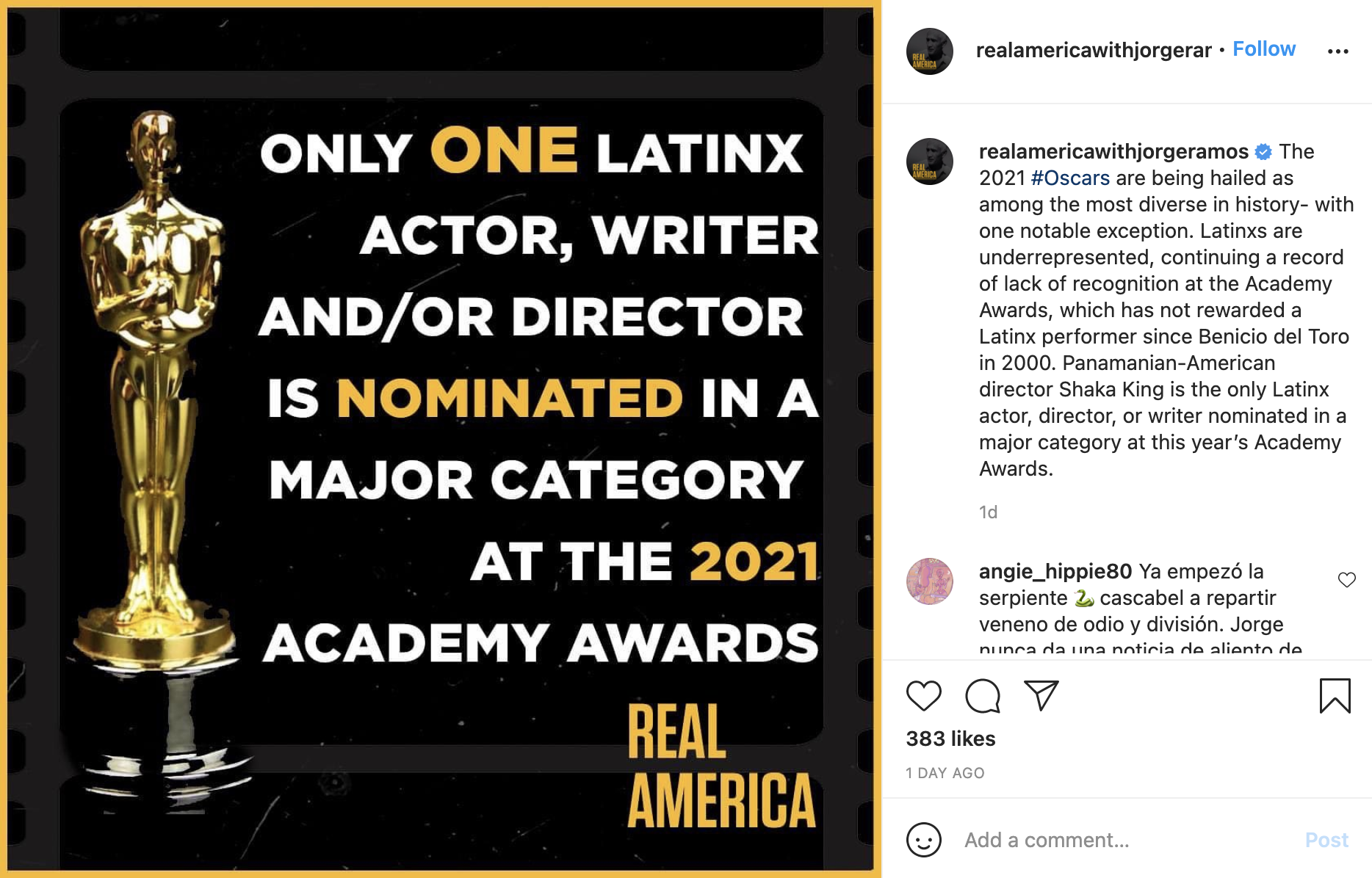 Leguizamo didn’t stop there, though, since he still felt the need to virtue signal a little bit more, congratulating his “black fam” and “Asian bros,” while also adding some statistics to really drive his point home and push that oppressive narrative even further.

“I am so happy for my black fam, and Asian bros and sistas and women,but i cant help mourn our absence,” the Spawn actor said. “We’ve been here for 500 yrs and before, we are the largest ethnic group 68M. can u imagine the amount of unanswered dreams and wasted talent? I can!” 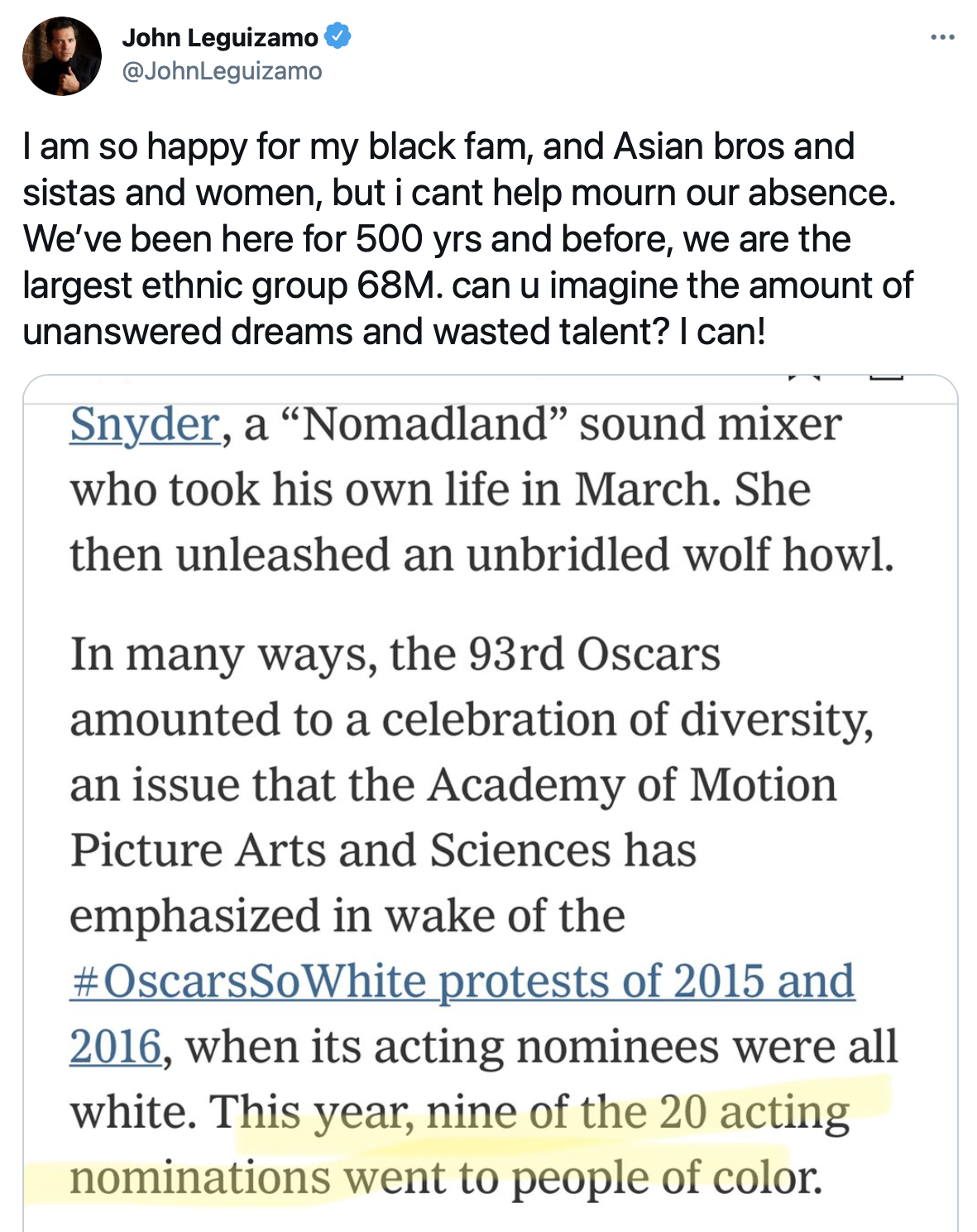 In an interesting — and to be honest, quite surprising — turn of events, Leguizamo decided to go even further and suggest that the term “POC [People of Colour]” is way too inclusive; for its own sake, even.

“And the term POC even though it is so inclusive it has become a weapon to exclude us and erase us better and more effectively! And if you don’t know I’m talking about Latinx!,” the actor added in response to his previous tweet. 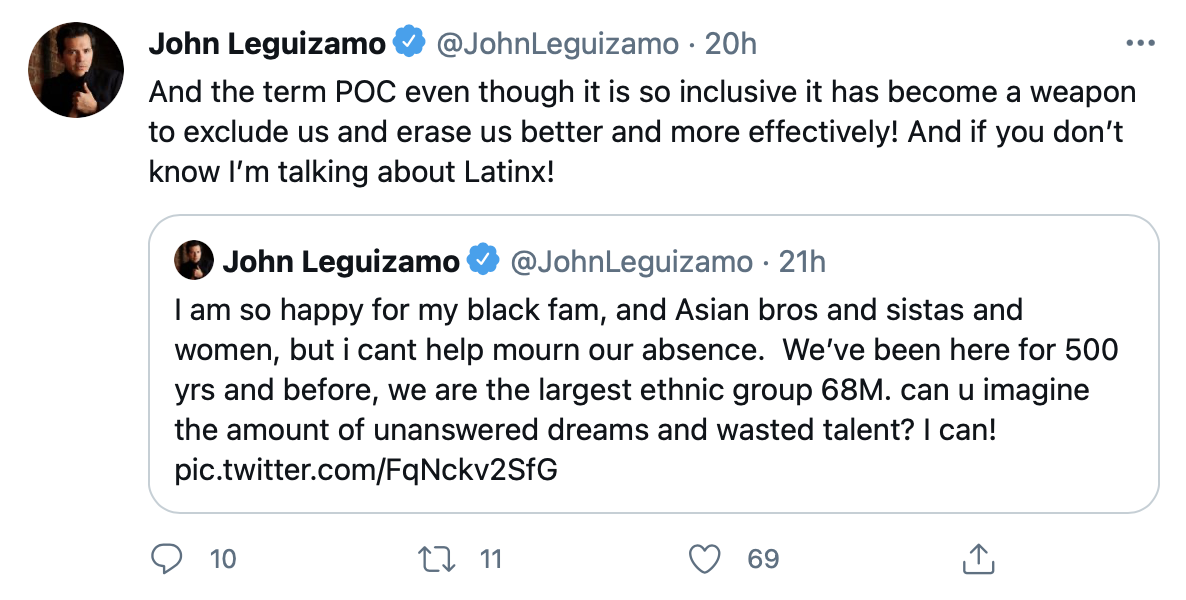 Leave it to woke leftists like John Leguizamo to actually call out their own kind when it comes to virtue signalling. Suggesting that the “people of colour” term, which is already unbearably progressive, has been weaponised in order to erase Latinos more effectively is quite the bold statement.

Pushing his virtue signalling tirade even further, Leguizamo claimed that Latino individuals have been marginalised by the North American society — a society that has, according to the actor, forced them to create their own positive self-image.

“WE ARE CHANGING THIS hermanas y hermanos,” reads Leguizamos tweet. He then added, “KEEP BEING YOU”, alongside an image that read, “Latino people face a double challenge: to create our own positive self-image while battling against the way the broader society portrays us.” 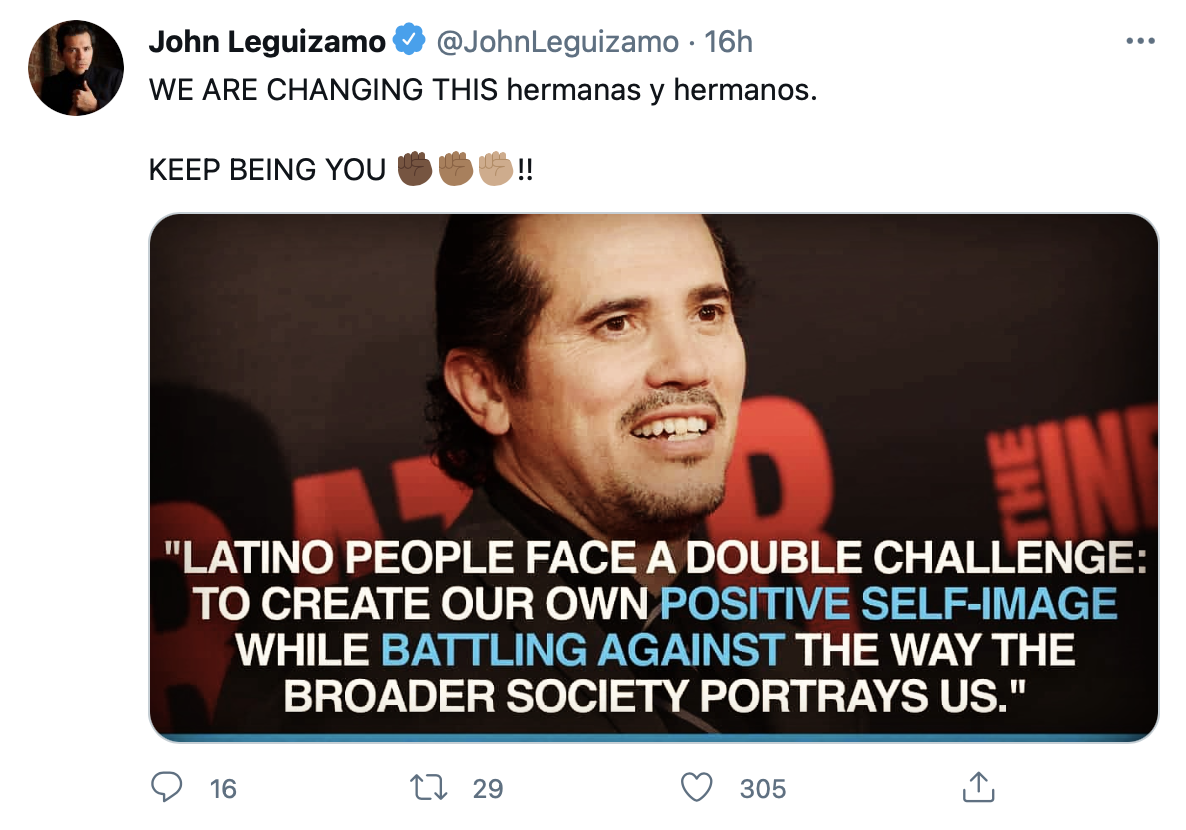 The point Leguizamo is trying to make is definitely difficult to make out. He says that Latinos have been excluded, but he doesn’t seem to understand that an award nomination, whichever this award may be, should not favour race over talent.

What’s even more amusing is the fact that only Hollywood celebrities seem to actually care about the Oscars, especially in recent years, since the interest general audiences had in the awards ceremony has seen quite the decline.

As reported by TVLine, the Oscars viewership saw an all-time low this weekend, with only 9 million people tuning in to watch the event — which meant a 58% decline in total viewership from the previous year; a year that was also regarded as an all-time low for the Academy Awards.

What do you make of John Leguizamo’s claims about Latino artists being excluded from the Oscars? Is the woke term “People of Colour” actually used as a weapon to erase Latinos like Leguizamo suggests? Sound off your thoughts in the comments section down below or on social media.