Superman has stood for “truth, justice, and the American way”, with few exceptions, since the 1940s, but it appears that a piece of his iconic catchphrase has officially been done away with in DC lore. 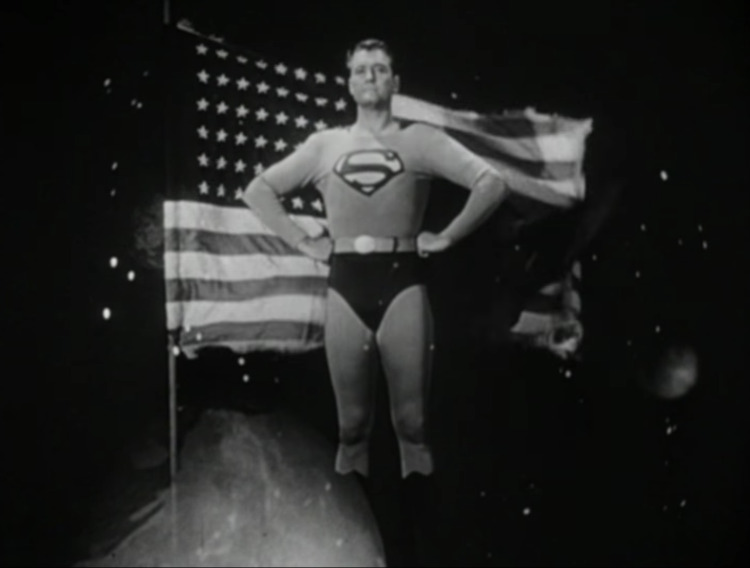 Source: The Adventures of Superman

In the first issue of the newly-launched series Superman: Son of Kal-El, writer Tom Taylor strikes “the American way” from the hero’s famous, time-honored line in favor of “Truth, justice, and a better world.”

Fortunately, Taylor isn’t doing this with Clark Kent. Instead, as the book’s title indicates, it’s his son, Jonathan Kent, who makes the decision to change the final element of his father’s catchphrase after he inherits the title of Superman and its inherent responsibilities when Krypton’s Last Son goes missing in action. 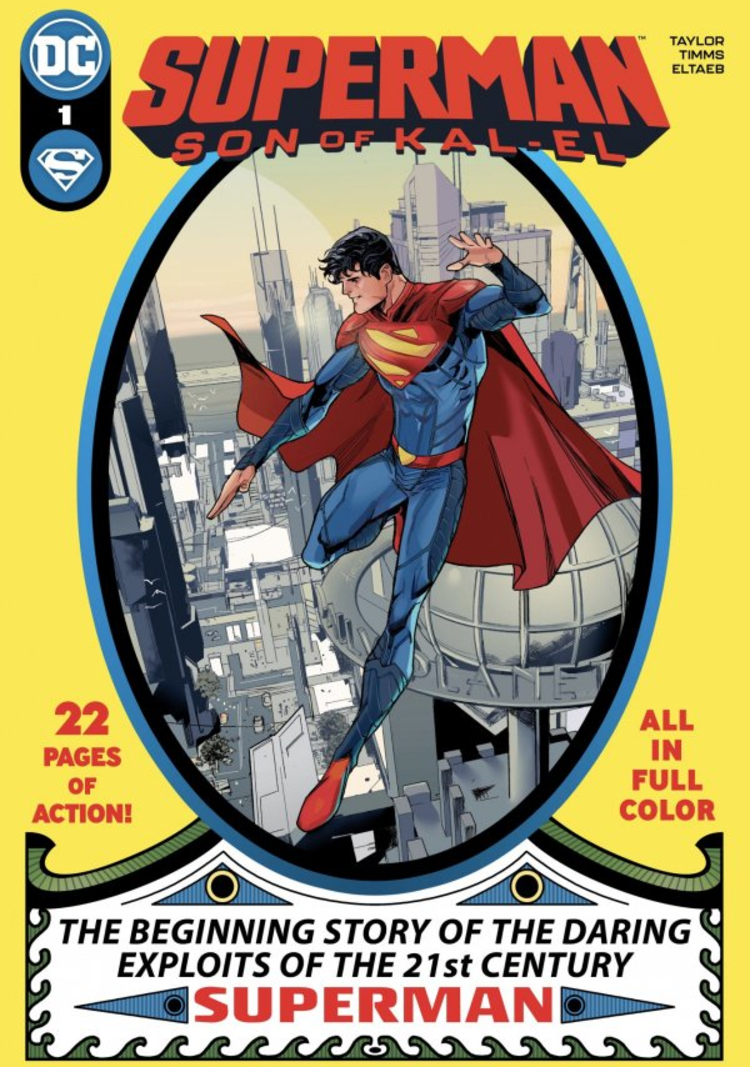 Related: Superman & Lois Showrunner Todd Helbing Explains Why You Can’t Change the Core of the Man of Steel

It all starts when Jonathan is hanging out and saving lives with Damian Wayne. After putting out a forest fire, the two discuss their respective burdensome legacies, and the inexperienced and obviously nervous Jonathan is put on the spot by Damian.

After expressing how he doesn’t want to overstep his bounds or make regular people as nervous as himself, Damian tells Jonathan that there are some people “who can do with being a little nervous”. 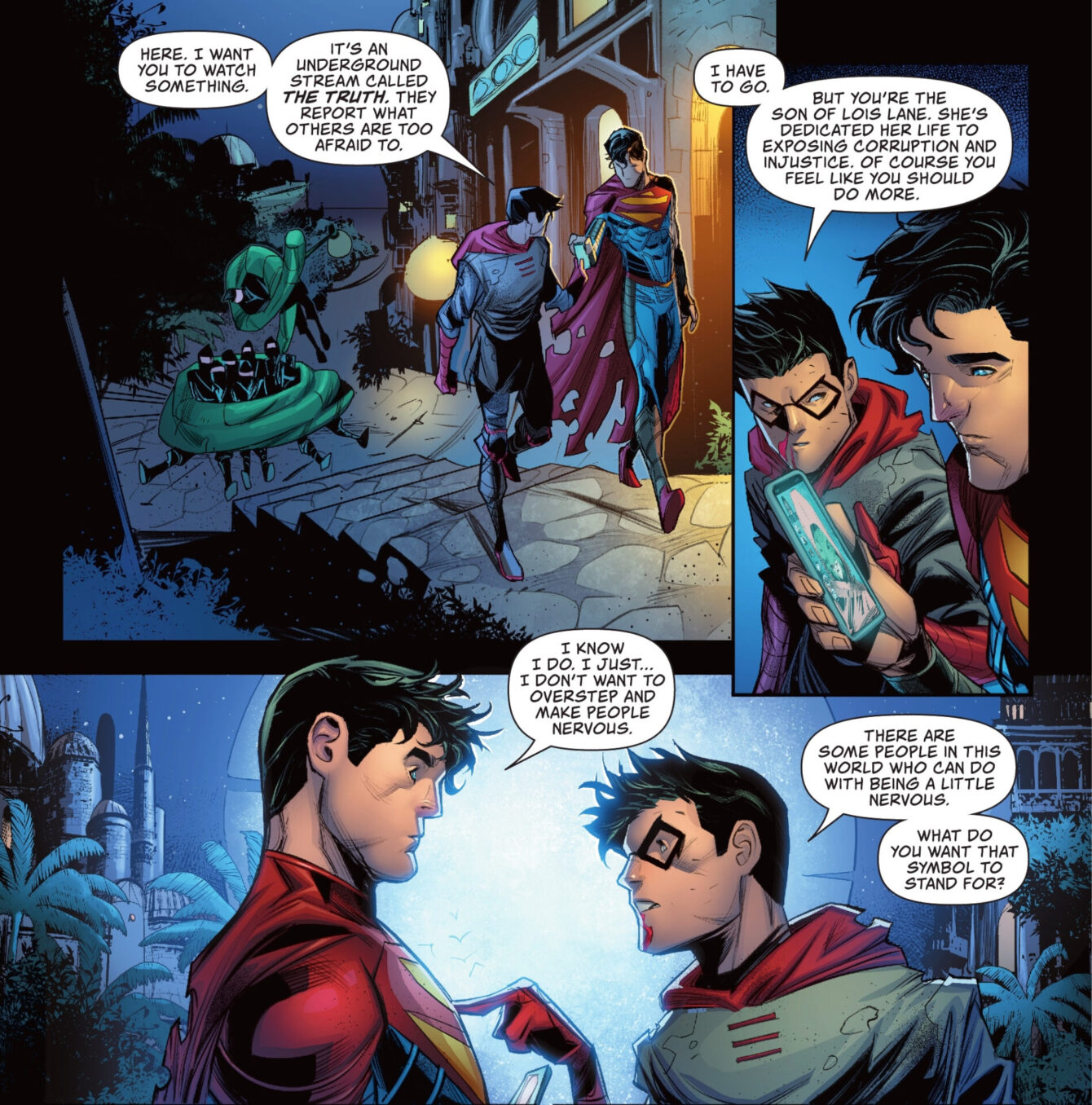 The Son of Batman then asks Jonathan what he wants the Kryptonian S symbol, otherwise known as the crest of the House of El, to stand for, to which Jonathan replies, “Truth. Justice. And a better world…I just want to help.”

It’s a new Superman, and Tom Taylor’s Son of Kal-El is arguably supposed to be its own thing, but not everybody is happy about this change. Even Screen Rant laments that “it is somewhat disheartening to watch writers strip away Superman’s American heritage page by page, year by year.” 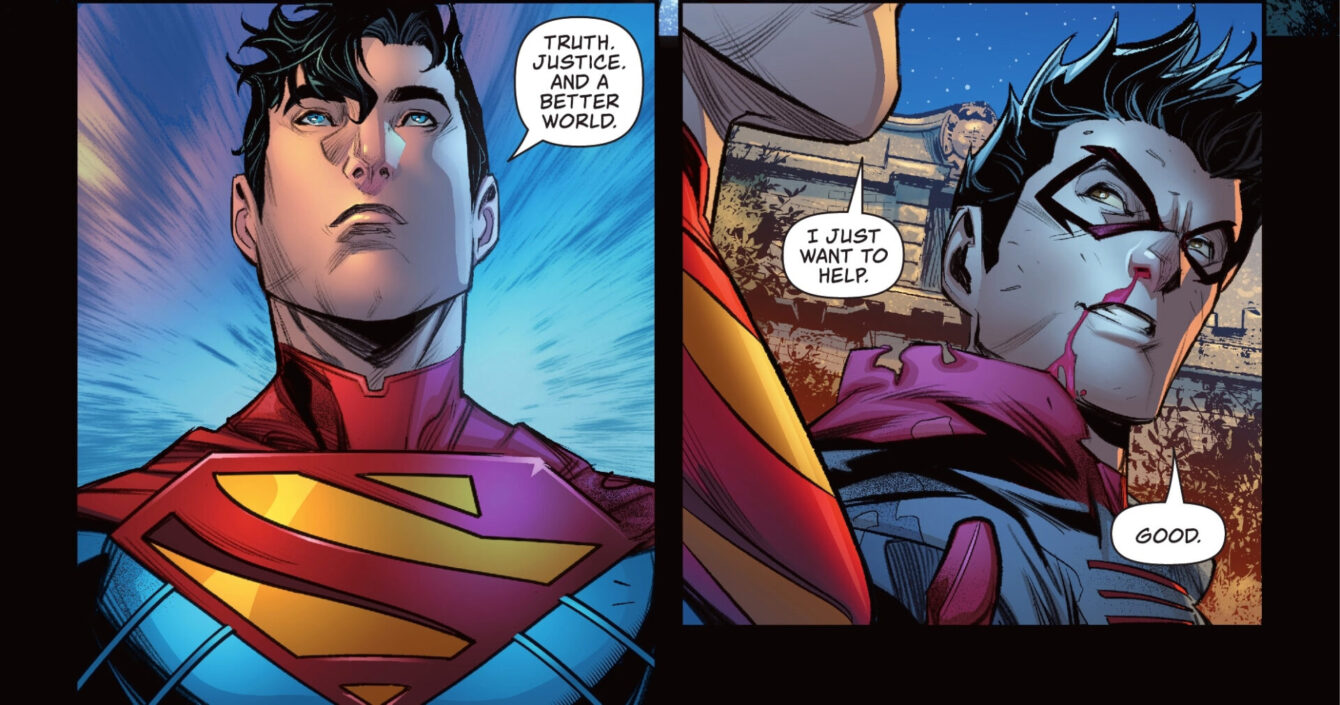 The iconic “Truth, Justice, and The American Way” line dates all the way back to the Superman radio dramas, where an iteration of the phrase is uttered in conclusion to the series’ opening, as the narrator announces, “Superman, who can leap tall buildings in a single bound, race a speeding bullet to its target, bend steel in his bare hands, and who, disguised as Clark Kent, mild-mannered reporter for a great Metropolitan newspaper, fights a never-ending battle for truth and justice.”

“The American way” line was eventually added to the slogan in 1942, making its debut in the intro sequence of Max Fleischer’s animated Superman serials in an attempt to boost patriotism and spirits at home during World War 2 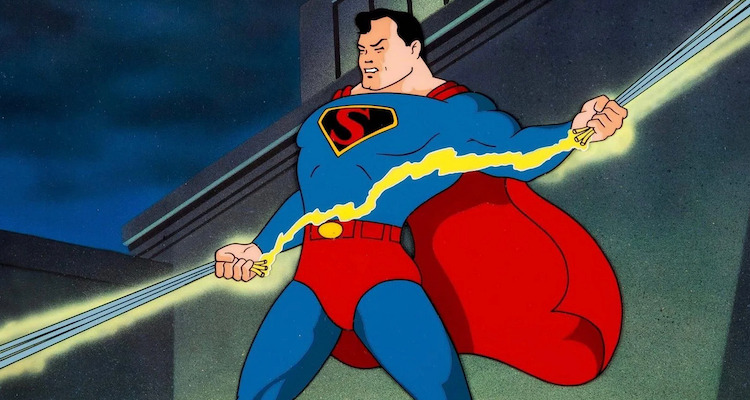 Forswearing “The American Way” and its part in Superman’s legacy is nothing new. One notably blatant moment in the Man of Steel’s history where it was cast aside came in 2006’s Superman Returns when Perry White, played by Frank Langella, ordered his newsroom to figure out if the resurfaced Big Blue still stood for “Truth, justice – all that stuff.”

Related: Brandon Routh Talks About The “Trauma Of Superman Returns” With Michael Rosenbaum

Superman even renounced his American citizenship in the comic books during the 2011’s “The Incident,” an Action Comics #900 backup story written by Man of Steel and Dark Knight scribe David Goyer.

Whether intentional or not, such creative developments can’t help but seem like the result of an agenda-driven undertaking meant to chip away at the Kansas-raised Man of Tomorrow’s American spirit.

Such developments don’t sit well with readers, including former Superman actor Dean Cain who has taken notice of what can be described, at best, as a backslide into neutrality for the character which aims to ameliorate him internationally, send a message of inclusivity, and avoid hurting any feelings. 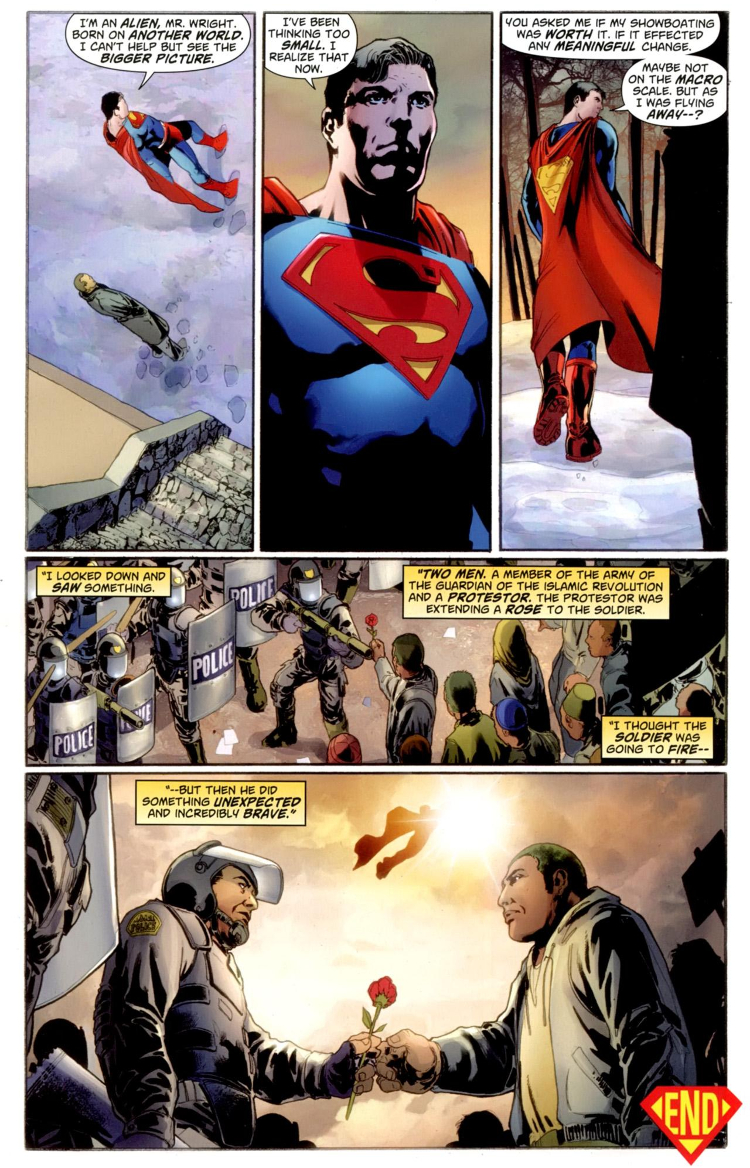 Last year, Cain said to Fox News’ Ainsley Earhardt that he didn’t believe he would be able to say the full phrase on TV if he was playing the part today, stating, “I promise you, as Superman, I wouldn’t today be allowed to say ‘truth, justice, and the American way’.”

“With those telling negative stories having an agenda…they hate capitalism, they hate law and order, they hate America,” the actor continued. 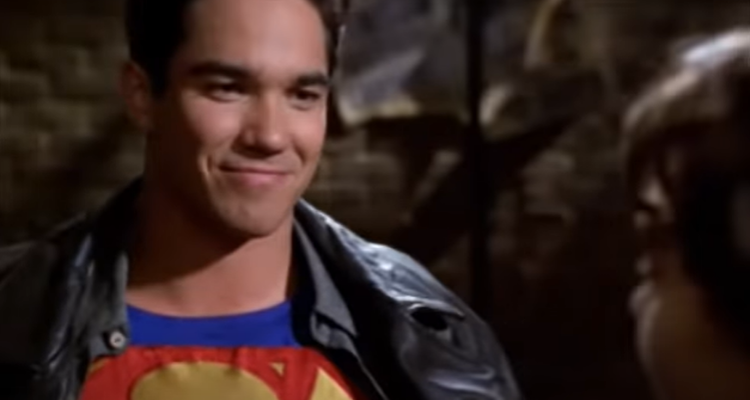 Cain expressed similar sentiments about Captain America’s belief in the American Dream being put in doubt this past month in the first issue of the United States of Captain America.

“The cool, the fashionable thing to do is to bash America and to hate America,” he explained from the perspective of someone who admittedly heard about the issue but didn’t read it. “I love the concept of Captain America, but I am so tired of this wokeness and anti-Americanism.”

“In my opinion, America is the greatest country in history,” Cain added. “It’s not perfect. We are constantly striving for a more perfect union, but I believe she’s the most fair, equitable country anyone’s ever seen, and that’s why people are clamoring to get here from all over the globe.” 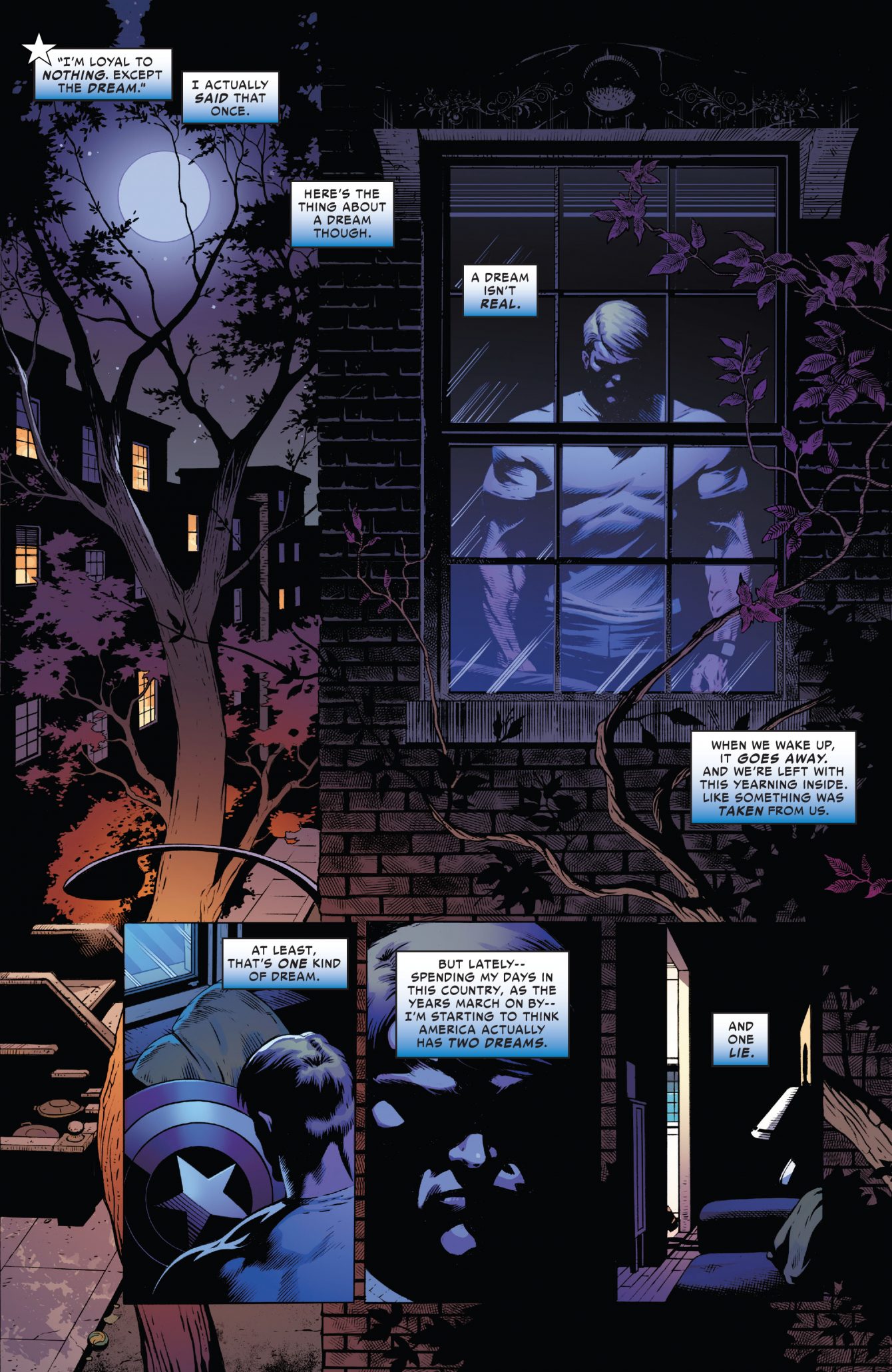 Source: The United States Of Captain America Vol. 1 #1 “You Brought Two Too Many” (2021), Marvel Comics. Words by Christopher Cantwell, Art by Dale Eaglesham.

A Superman who stands for Truth, Justice, the American Way, and “all that stuff” would agree. Tell us in the comments below if you do too.