Simu Liu has continued to ignore history in order to virtue signal for brownie points in the here and now, as the actor recently doubled down on his self-centered assertion that his upcoming Marvel film, Shang-Chi and the Legend of the Ten Rings, will ‘finally’ show audiences an “aspirational” Asian hero. 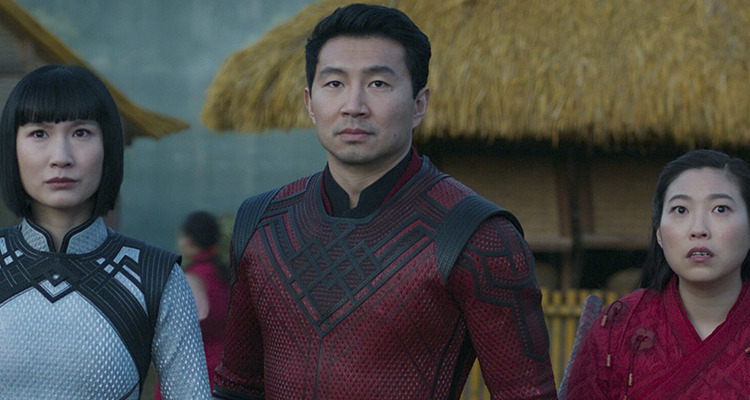 Throughout the online Q&A, Liu not only chose to respond near-exclusively to softball questions with answers that felt forced and scripted, but in one particular instance, outright ignored a series of questions of genuine substance.

Presented with a series of five questions by user /u/HotZoneKill, “[Which] Shang-Chi comics you’ve read that stuck out to you well?”, “Who was your favorite sparring partner while filming the movie?, “Who would be your top choice to play Amadeus Cho/Totally Awesome Hulk/Brawn?”, “What’s your favorite food item from Bopomofo?”, and, cheekily, “Why is Tim Horton’s so disappointing?, Liu chose to only answer the two food-related questions.

“Bopomofo’s Mapo Taters will change your life. Tim Horton’s is trying too hard to do food menu items,” the actor briefly replied.. “Ice cap still on point tho.” 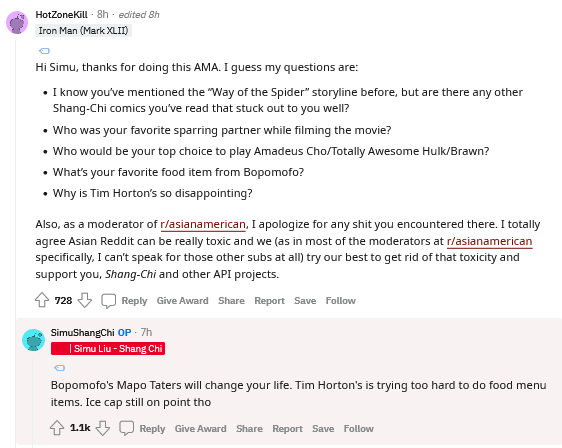 However, his inability to inspire any further confidence in his upcoming film did not hinder Liu from using the AMA as an opportunity to once again position himself and his film as Godsends for Asian representation, which he almost exclusively frames as having been devoid of any significant actors since at least 2012.

Asked by /u/FutureIsBrightForUs the standard questions of, “As an Asian actor, how difficult was it for you working your way up?” and “Did you have to deal with racism, stereotyping, typecasting, etc. during that journey?,” Liu audaciously replied, “Let’s put it this way; in 2012 when I first started out, I thought that maybe if I worked really really hard, I could be a guy that gets beaten up by one of the main characters one day.” 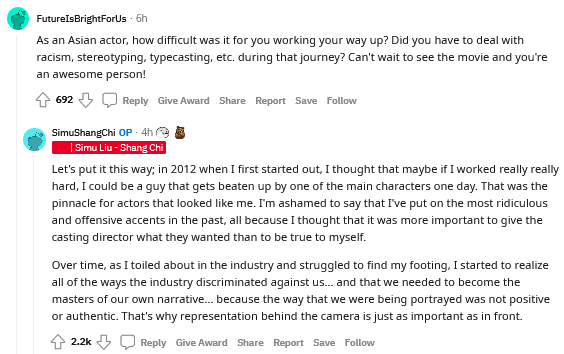 Related: Kevin Feige Promises Shang-Chi “Is As Big As Anything That We’ve Ever Brought To Life In The MCU Before”

“That was the pinnacle for actors that looked like me,” he bizarrely claimed. “I’m ashamed to say that I’ve put on the most ridiculous and offensive accents in the past, all because I thought that it was more important to give the casting director what they wanted than to be true to myself.”

He continued, “Over time, as I toiled about in the industry and struggled to find my footing, I started to realize all of the ways the industry discriminated against us… and that we needed to become the masters of our own narrative… because the way that we were being portrayed was not positive or authentic.”

Like his last declaration, wherein he claimed that Shang-Chi would give Asian kids “what I didn’t [have], which are characters that are aspirational, that also reflect their lived experience,” this declaration is not only self-aggrandizing and seems to serve no other purpose than inflating his and Disney’s egos, but completely ignores the multitude of Asian actors who entered pop culture history long before Liu’s career began.

Not only does Liu’s positioning of Shang-Chi as an oasis in a desert of Asian representation spit in the faces and careers of such legendary cinematic icons as Jackie Chan, Chow Yun Fat, Tony Jaa, Bruce Lee (whom the character of Shang-Chi was based upon), and Jet Li, but also Liu’s direct MCU co-stars Chloe Bennett and Ming-Na Wen, both of Chinese heritage, who headlined Marvel’s Agents of S.H.I.E.L.D. for seven years across 136 total episodes. 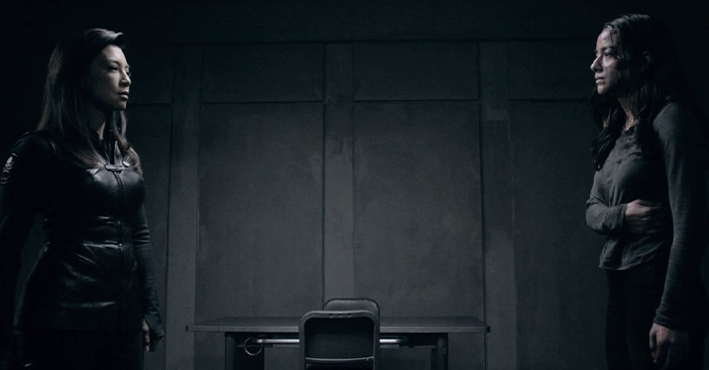 Related: Critic Scores Arrive For Marvel’s Shang-Chi And The Legend Of The Ten Rings

Of course, this is to say nothing of the storied careers of the decades worth of Asian cinema and television stars whose native works became Western fan-favorites – including various tokusatsu and anime productions, whose openly Japanese casts and characters helped establish a strong foundation for interest in other Asian cultures in the West.

In fact, without the groundwork laid by the specific career of Japanese cultural sensation Hiroshi Fujioka, whose original and continued portrayal of the very first Kamen Rider arguably served as the first spark to the widespread wave of interest in live-action superhero adaptations audiences know today. 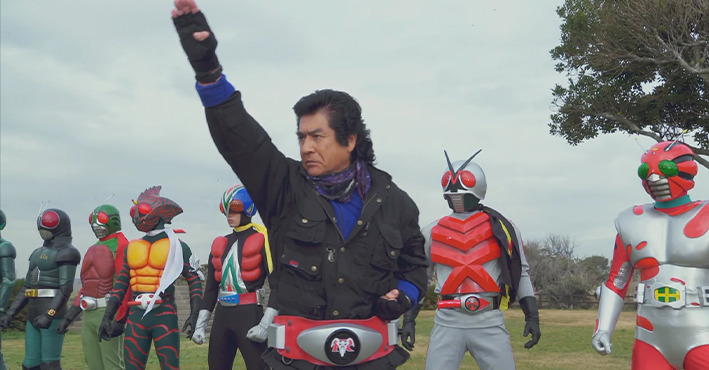 Ultimately, one can only hope that Liu’s arrogance and reliance on Marvel’s audience having a total attention span of zero seconds turns out to be a winning marketing strategy, as Shang-Chi is currently projected to have the worst opening weekend in the history of the Marvel Cinematic Universe.

What do you make of Liu’s latest comments? Let us know your thoughts on social media or in the comments down below!