As the murder trial of Kyle Rittenhouse continues to take place, Hollywood celebrities have taken it upon themselves to share their fairly uneducated opinions about the case, evidencing both that they have not been watching the trial nor do they care about the facts presented. 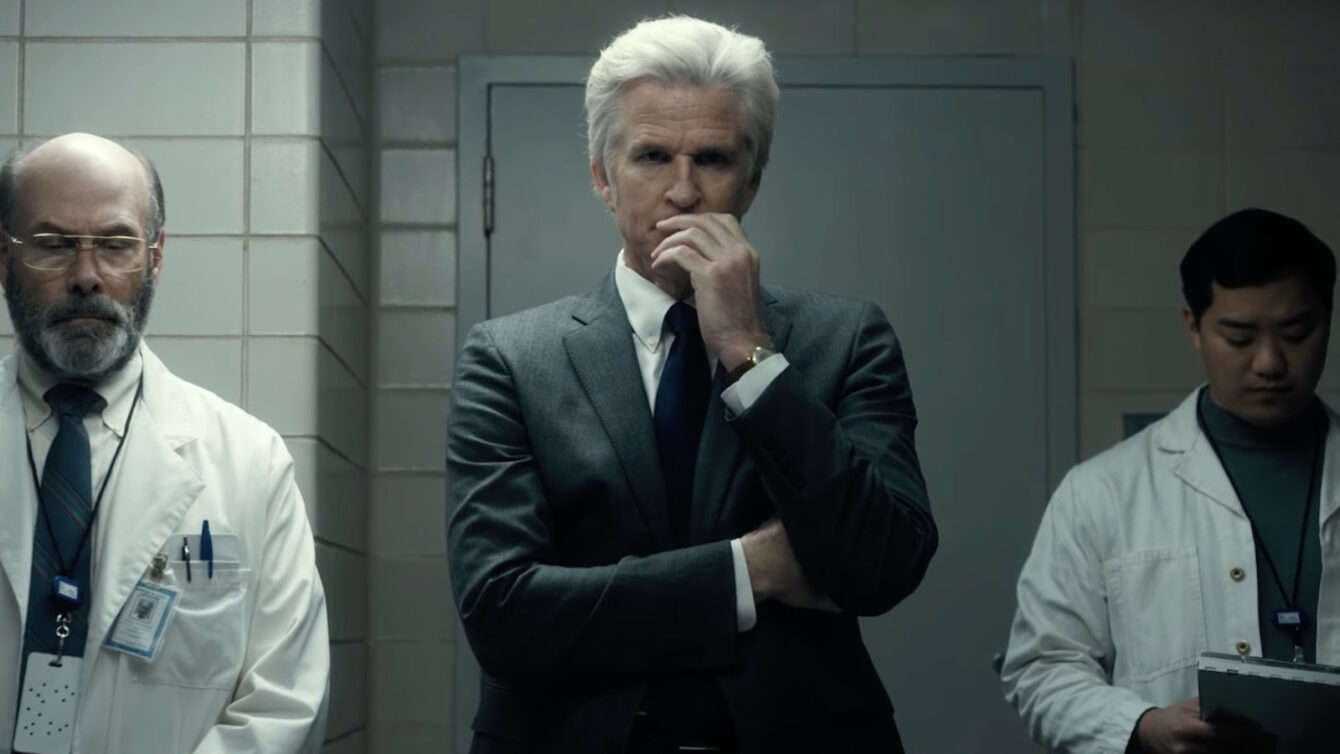 One such celebrity is actor Matthew Modine, known for his roles in Stranger Things and Full Metal Jacket, who is facing backlash after using his own armchair analysis of a picture of Rittenhouse taken during last year’s riots in Kenosha, Wisconsin, to assume the teenager’s intent on the night of the shooting incident.

“Is #KyleRittenhouse wearing surgical gloves? If so, why? To cover his fingerprints?” wondered Modine in a tweet shared on Tuesday. “Why would he load a weapon with bullets. Travel to an event. Aim the rifle at people. Pull the trigger of the rifle he’d loaded. Unless he went there. With intent to kill?” 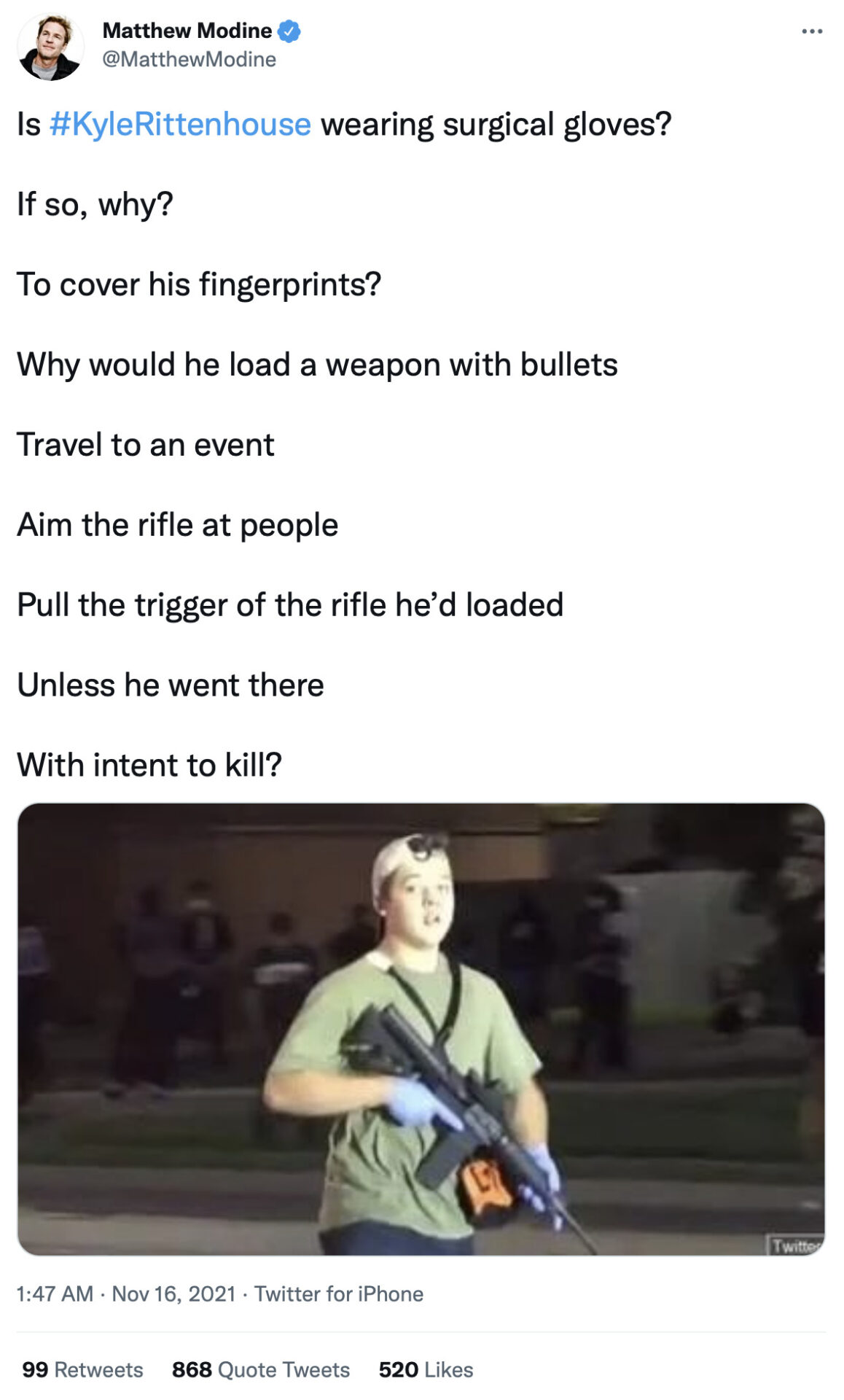 Unfortunately for Modine, his analysis of the picture didn’t go as he may have initially planned, as Twitter users were quick to call him out for his biased, rushed, and uneducated take on Rittenhouse’s state of mind.

Giving a pretty straightforward explanation as to why Rittenhouse was wearing gloves in the image shared by Modine, user @Hobbhammer24 provided additional images that see the 18-year-old clearing up graffiti in the streets of Kenosha earlier in the day.

“Here he is earlier that day clearing up graffiti. Notice the spray bottle in his hand? And the gloves on his hands?” wrote the user, providing empiric evidence in an attempt to make Modine aware of just how uneducated his analysis was. 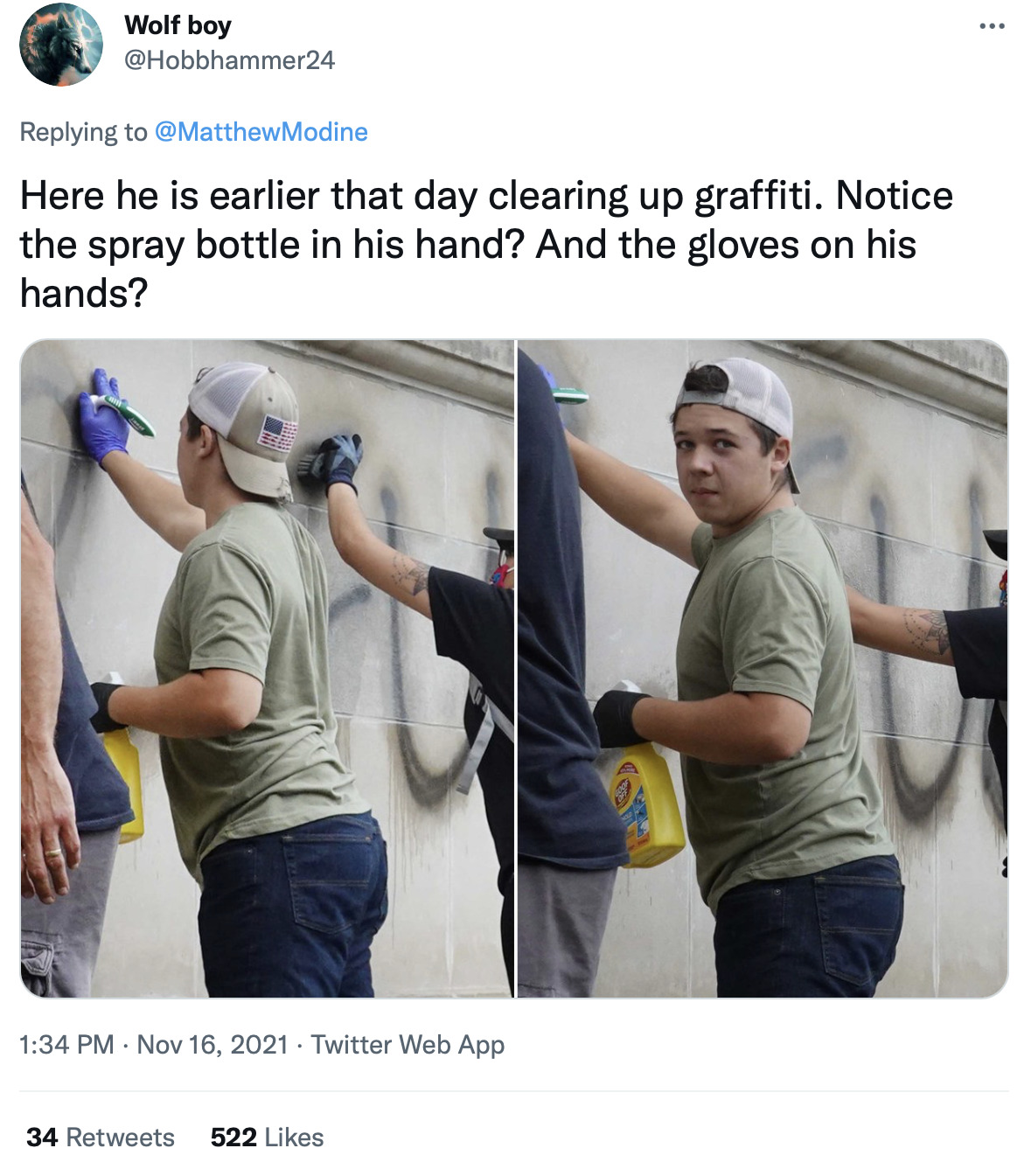 Mocking Modine’s questioning of Rittenhouse’s gun being loaded, @brains_brad asked the rhetorical question, “What’s the point of having a gun for self-defense if you’re not going to have bubbles in it?”

“Why is it so hard to understand that he didn’t go there for that and that that is his community,” the user then asserted, sharing one of the same images as seen above. 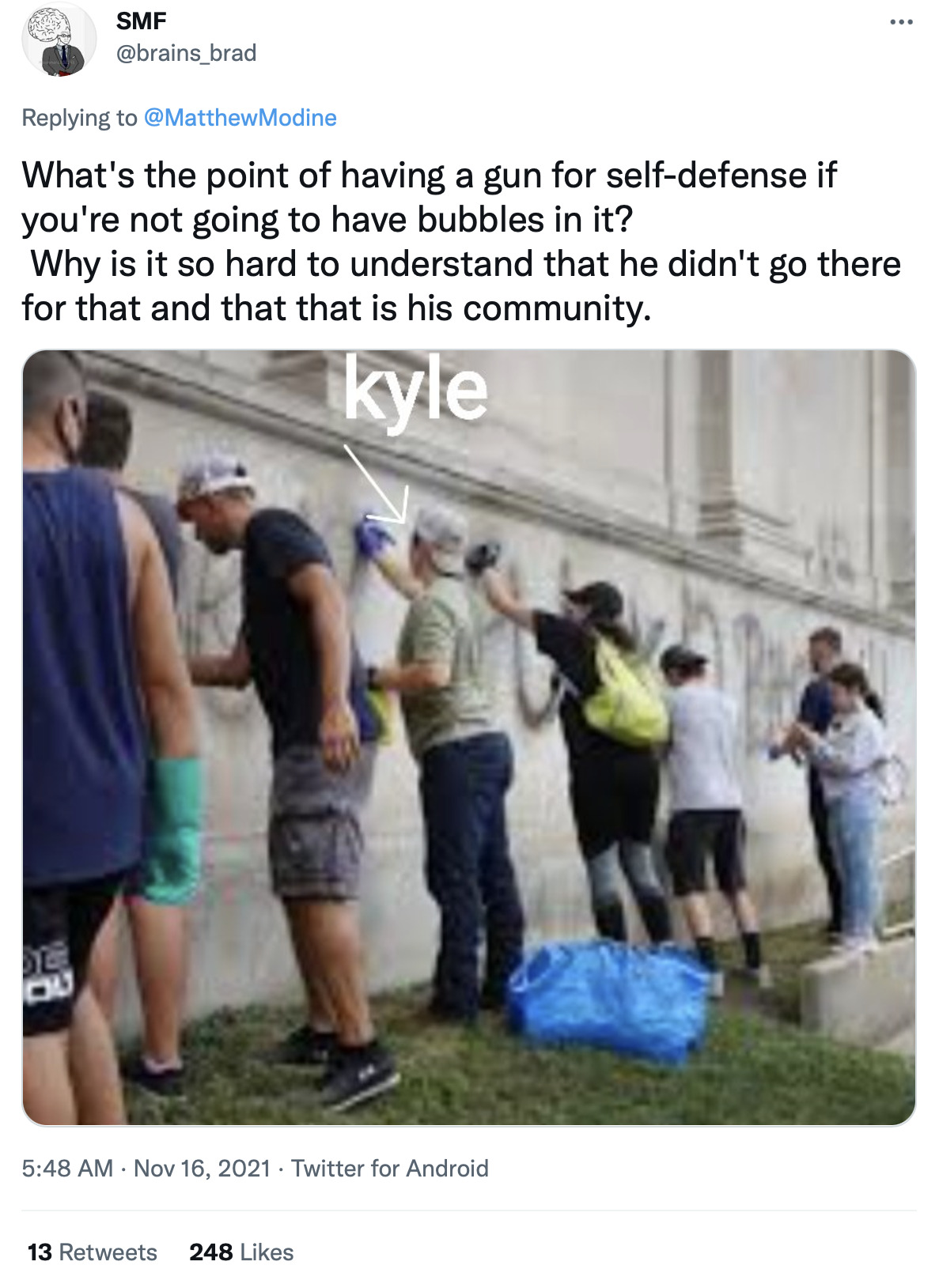 “Get it yet champ? Thinking hard? Try watching the footage. You might learn something,” wrote @Oli_Compolli, calling out Modine on his ignorance. 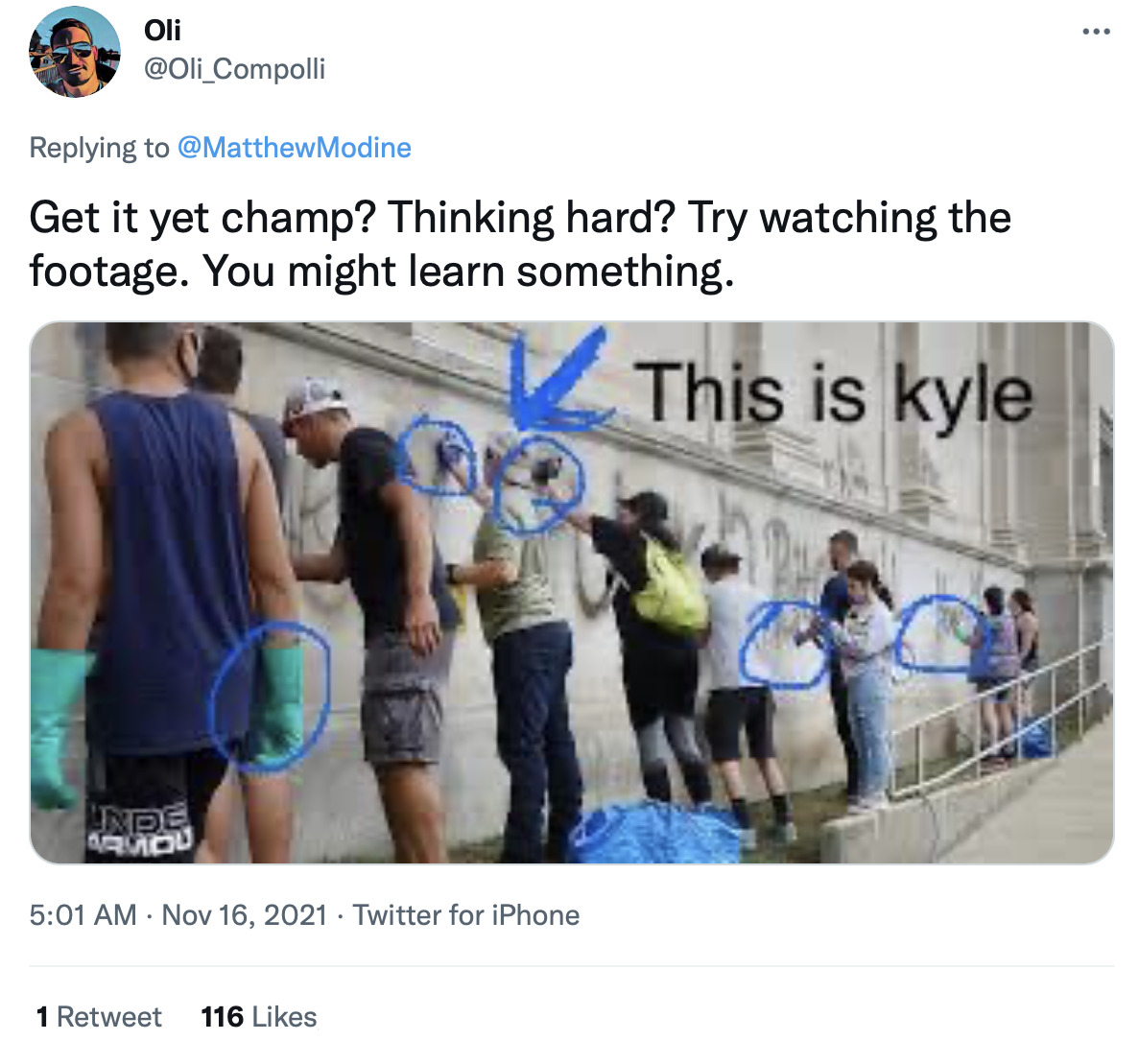 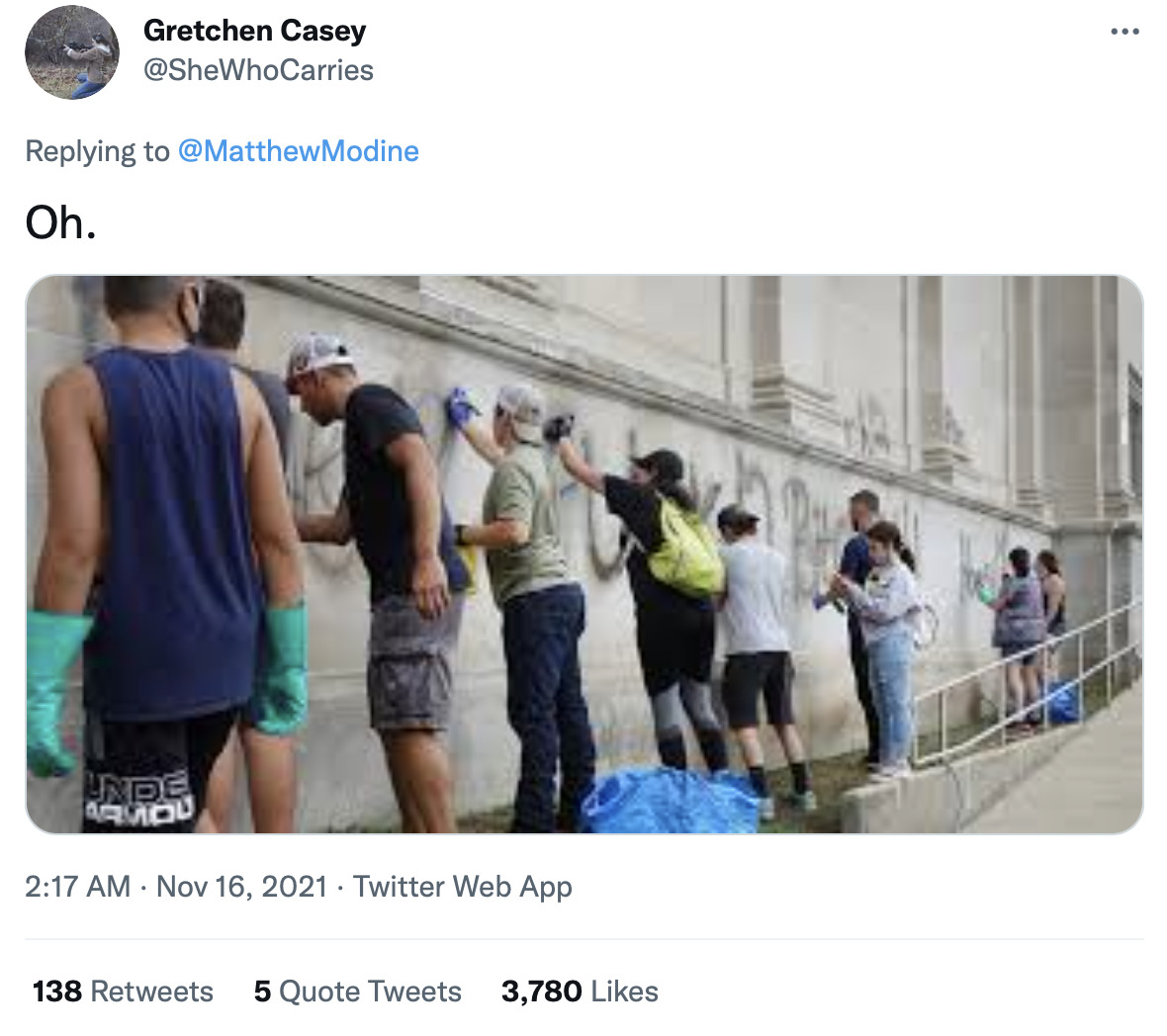 “Your daily reminder that scriptwriters frequently don’t get enough credit for making actors seem clever on screen,” cheekily wrote @CRainsZombie to drive his point across.

@Terps32 took issue with the actor’s usage of the word ‘event’ when referring to the riots, asserting, “Ah, a riot is an event in your world. Lol. Maybe try watching the trial and the evidence presented.” 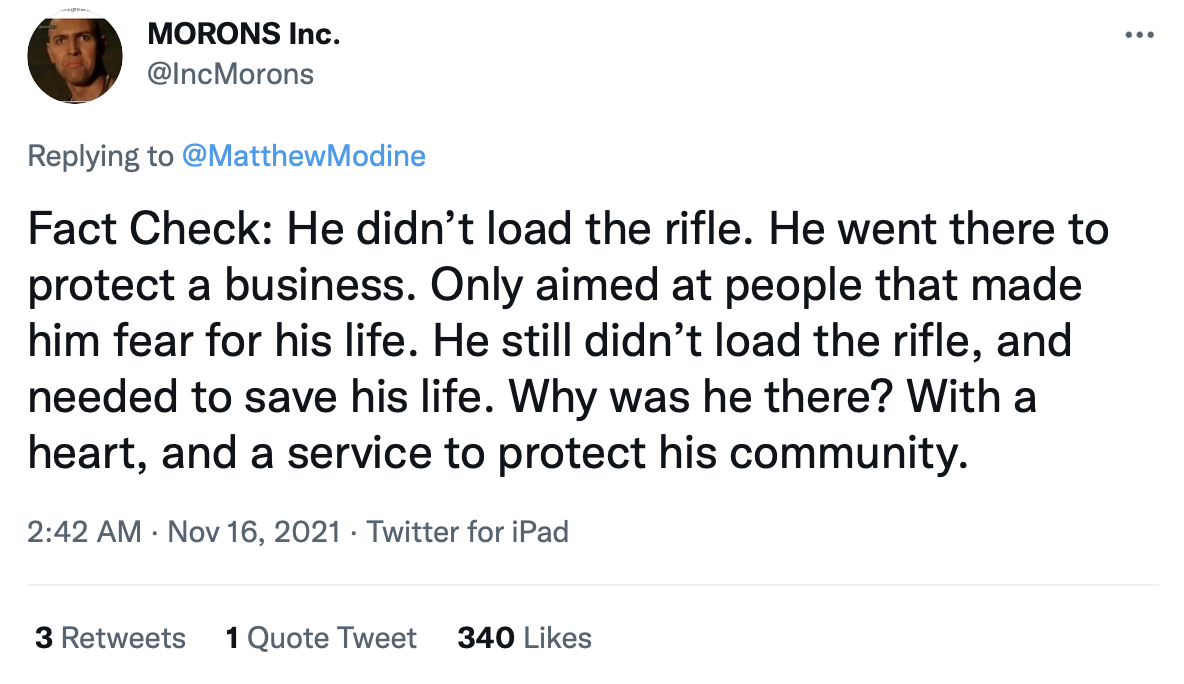 @brianrusselll wrote, “I’ve seen a lot of bad takes on this today, yet Hollywood never fails to come through with the worst.”

@RichardCranyum took the time to express how disappointed he was in Modine, who he considered a fine actor.

“For years, I liked you as an actor,” the disappointed user said. “Loved you as Lowden Swain. After reading your asinine comments here, I have lost all respect. This was not an event. It was looting and rioting. Kyle defended himself against criminal thugs who attacked him. That is the only truth.” 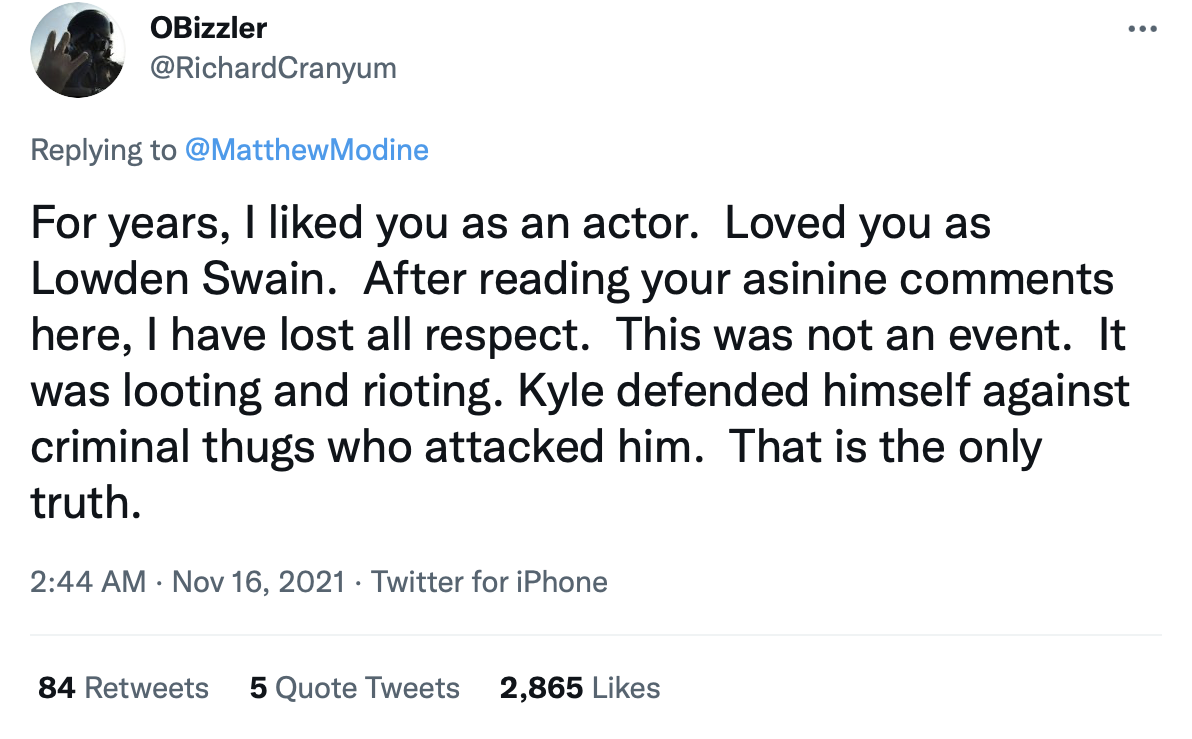 Attempting to make sense of the thought process going through the minds of the rioters who attempted to forcefully take Rittenhouse’s AR-15 from his person, user @Johnfred_91 wondered, “Why would someone go out of their way to vandalize stuff, see someone with a rifle that’s literally not bothering them, and them chose to go and attack them? The real question.” 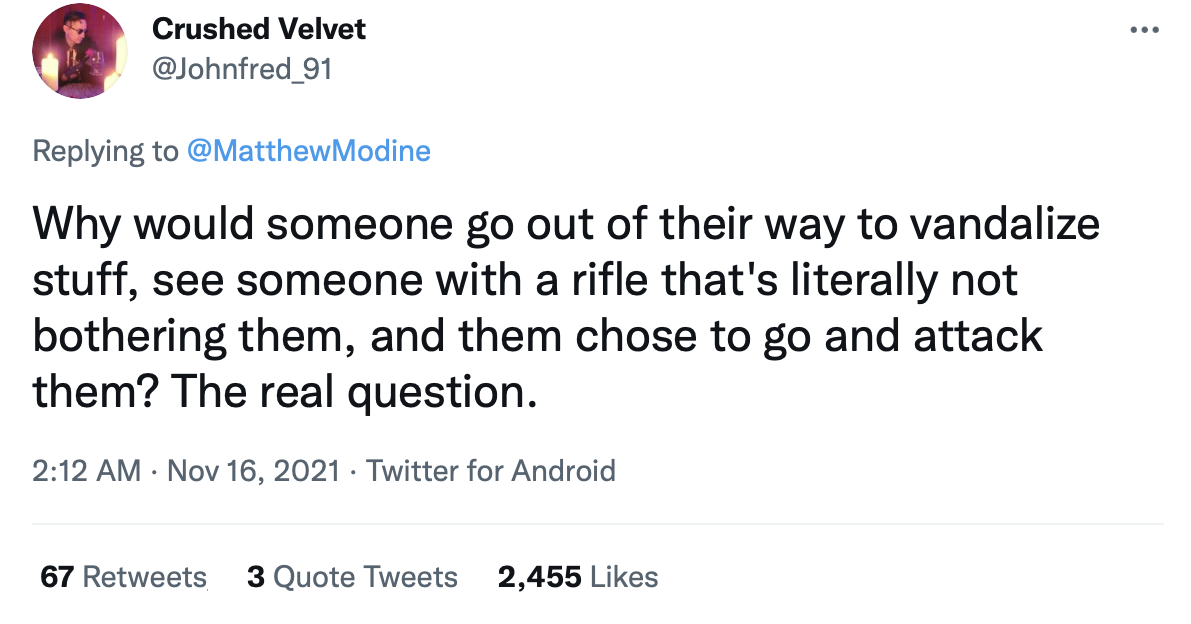 @CurtMarshall10 noted out how ridiculous Modine’s analysis of the Rittenhouse picture was, asking, “Why would he try and cover his fingerprints on a gun he voluntarily took to police? Think before you tweet.”

“Why would finger prints matter when there are literally multiple videos of him?” mockingly asserted @KevW09. “What’s he gonna say? ‘Nah dawg that’s not me. Check it for prints.'”

On this particular note, it is worth mentioning that Rittenhouse turned himself in at the Antioch Police Department about an hour after he was confronted by rioters on the night of the 25th of August, 2020.

“I love when room-temp IQ actors get ratioed. Restores my faith in humanity,” said another user who, like many others, believed Modine’s claims were asinine.

A fairly interesting take was shared by Twitter user @Voidward, who not only called out Modine for not doing his due diligence regarding Rittenhouse’s case, but also provided some information that has been of public knowledge pretty much since the riots took place in August of 2020.

“If you had looked up anything about the case at all you would have found all your answers,” they explained. “Here’s some basics: He was in a riot with violent criminals. He was offering free medical aid to anyone hurt. He put out fires. He was attacked and tried to flee.” 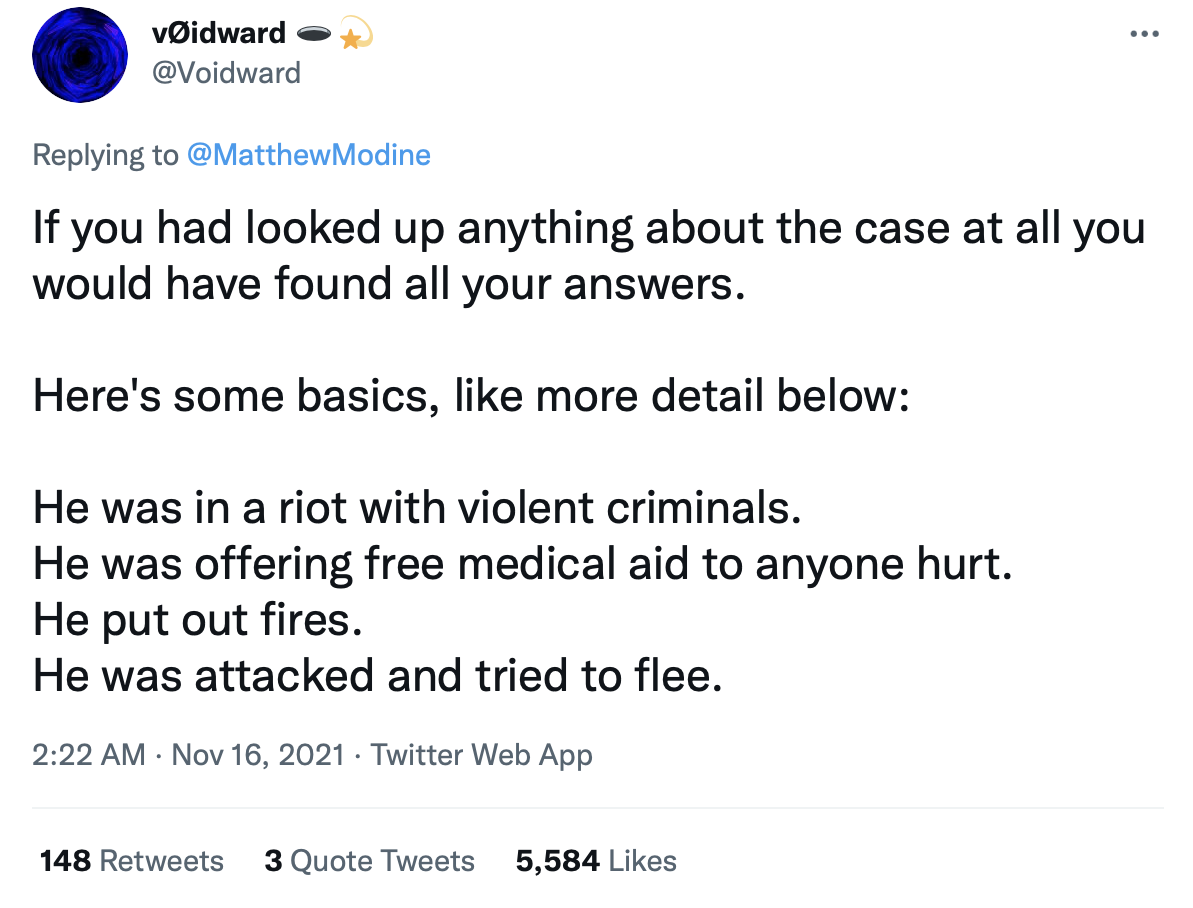 “Do you even know what was happening during those riots, you f–king moron?” wrote The Blaze podcast host Elijah Schaffer, who shared a clip from last year at the Kenosha riots.

As an interesting aside, Schaffer actually managed, by happenstance, to interview Rittenhouse prior to the shooting.

Do you even know what was happening during those riots, you f*cking moron? pic.twitter.com/K6zvPSHHzf

What do you make of Modine’s analysis of Rittenhouse? Let us know your thoughts in the comments section down below or on social media.