Nearly three years after the now infamous allegations of sexual misconduct were first levelled against Vic Mignogna by a number of his fellow Funimation anime voice actors, a number of the actor’s former cast and crew members from the set of Star Trek Continues have thrown their support behind the #KickVic movement and publicly condemned the man who served on the fan series’ as both its executive producer and lead actor. 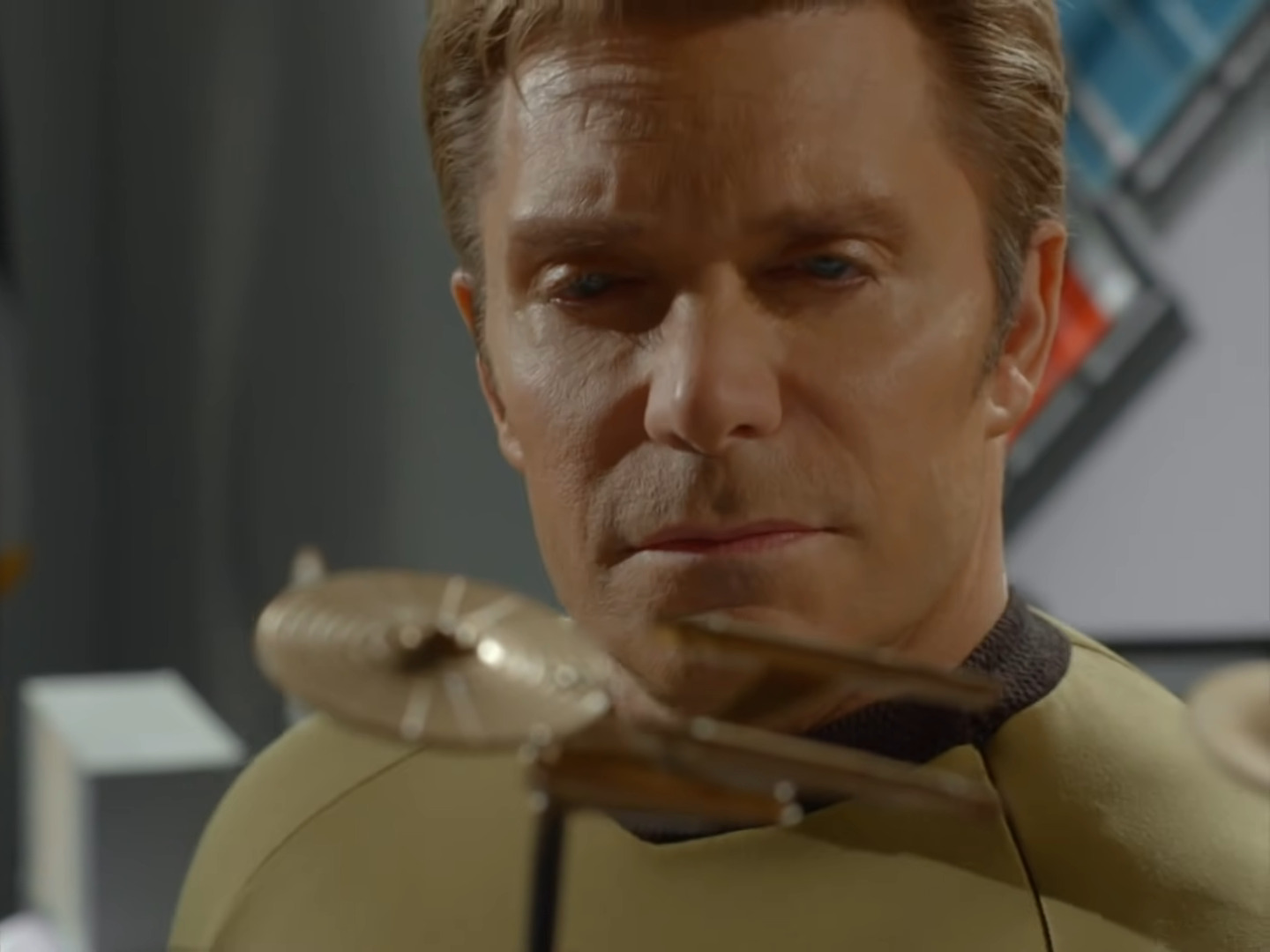 Mignogna was publicly rebuked by his former Star Trek Continues production members on December 15th when series director James Kerwin, noting that “recent events have compelled us to clarify our position regarding certain accusations against – and the continued fanbase unrest surrounding – the series’ executive producer and lead actor,” published a group letter of condemnation against the actor to his personal Twitter.

“All of us strongly and unequivocally condemn any harassment or inappropriate behavior – particularly directed against women – which occurred either outside the confines of the production or within it,” read the statement. “Such conduct is wholly contrary to our values, and should never be tolerated under any circumstances.” 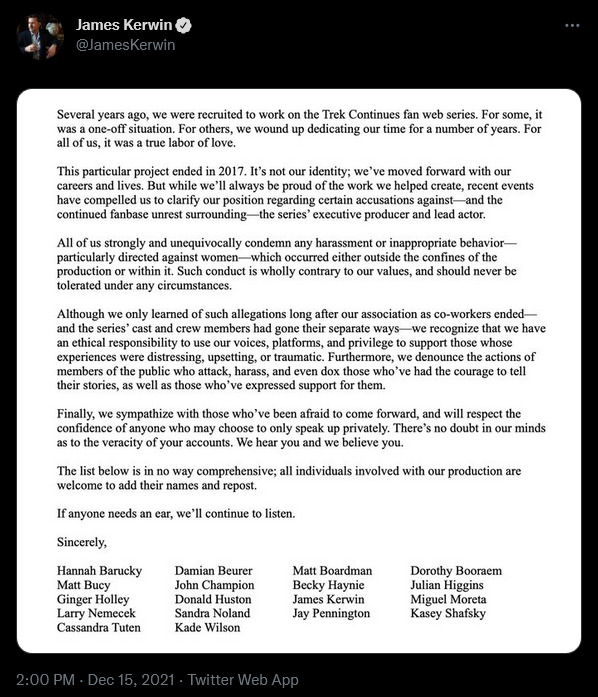 It continued, “Although we only learned of such allegations long after our association as co-workers ended – and the series’ cast and crew members had gone their separate ways – we recognize that we have an ethical responsibility to use our voices, platforms, and privilege to support those whose experiences were distressing, upsetting, or traumatic.”

“Furthermore, we sympathize with those who’ve been afraid to come forward, and will respect the confidence of anyone who may choose to only speak up privately,” the production members added. “There’s no doubt in our minds as to the veracity of your accounts. We hear you and we believe you.” 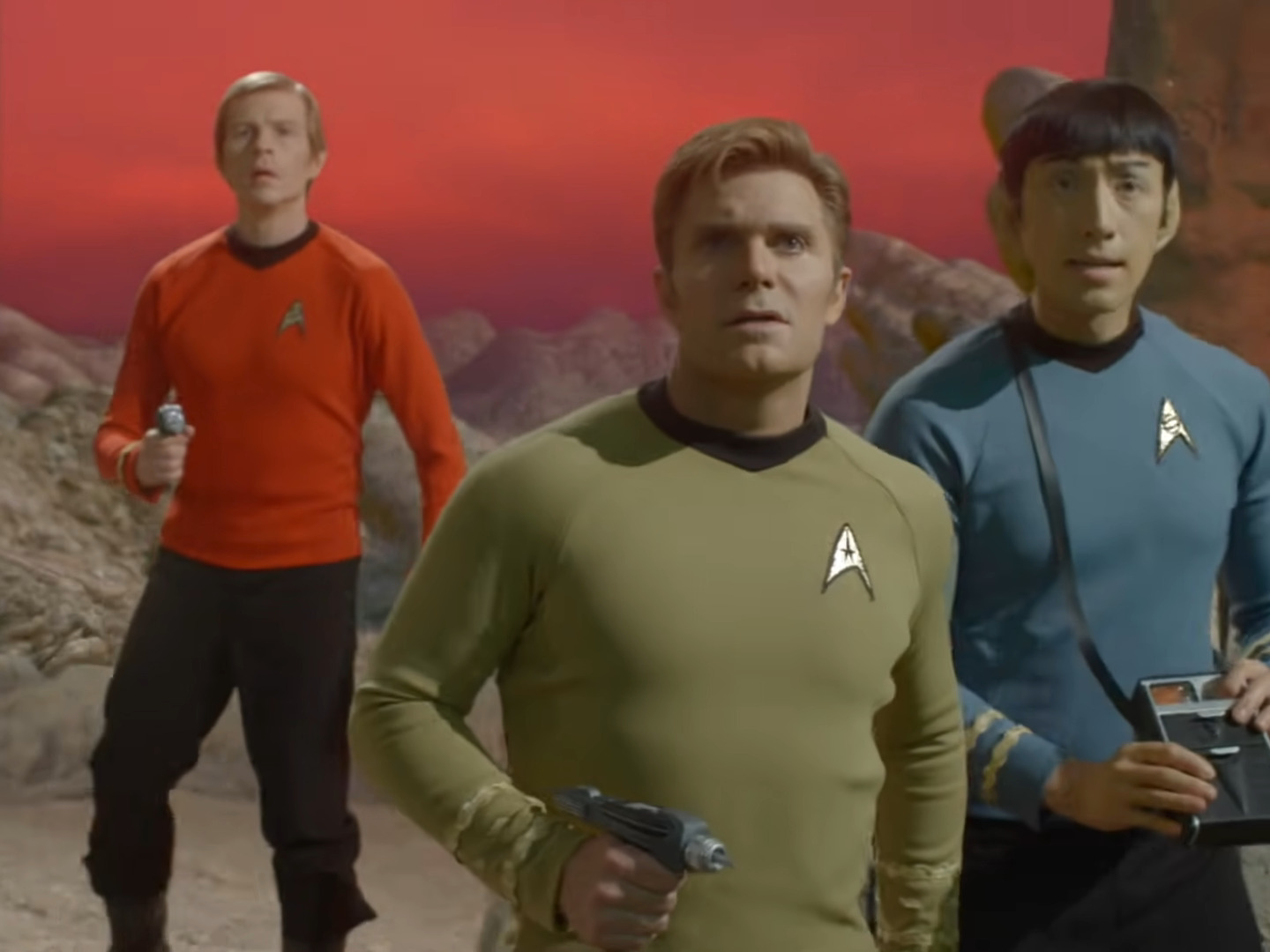 Alongside an open-invitation announcing that “all individuals involved with our production are welcome to add their names and repost,” the statement then listed out its debut signees, which include: 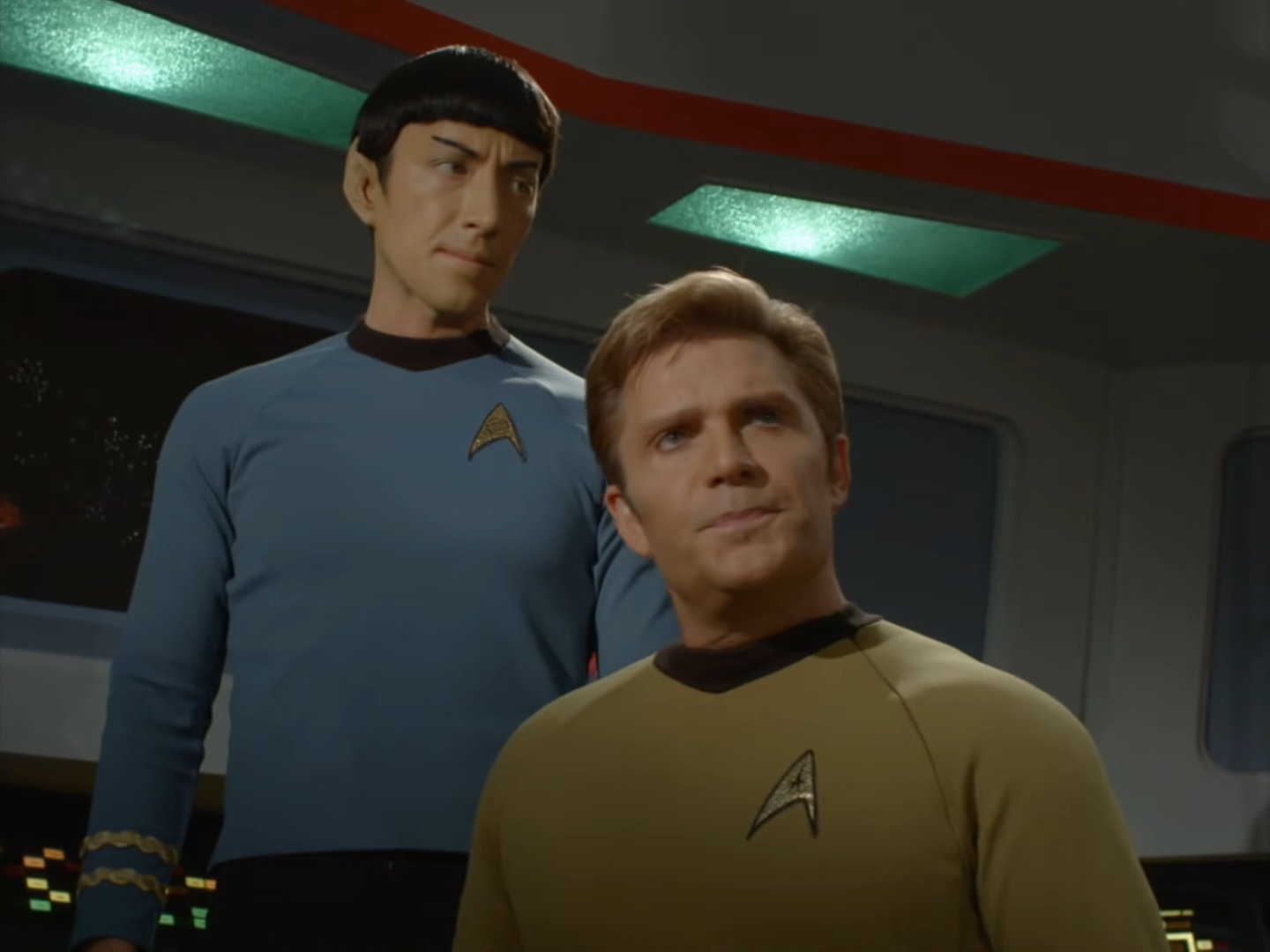 “If anyone needs an ear,” the statement concluded, “we’ll continue to listen.”

Though it was not specified which specific “recent events” had warranted the statement’s writing, it appears to have been issued at the behest of Amy Imhoff, the woman whose recent social media campaign against Mignogna resulted in his disinvitation from the 2021 Los Angeles Comic-Con.

In a tweet made by Imhoff shortly after Kerwin published the group statement, the Star Trek convention host and moderator gave “many thanks to the Star Trek Continues team that has now officially spoken out to condemn harrassment and doxxing” and admitted that “ this statement comes directly after my extremely negative experience with this person’s fan base.”

“The more voices, the better,” she added. “Love to my #StarTrek family.” 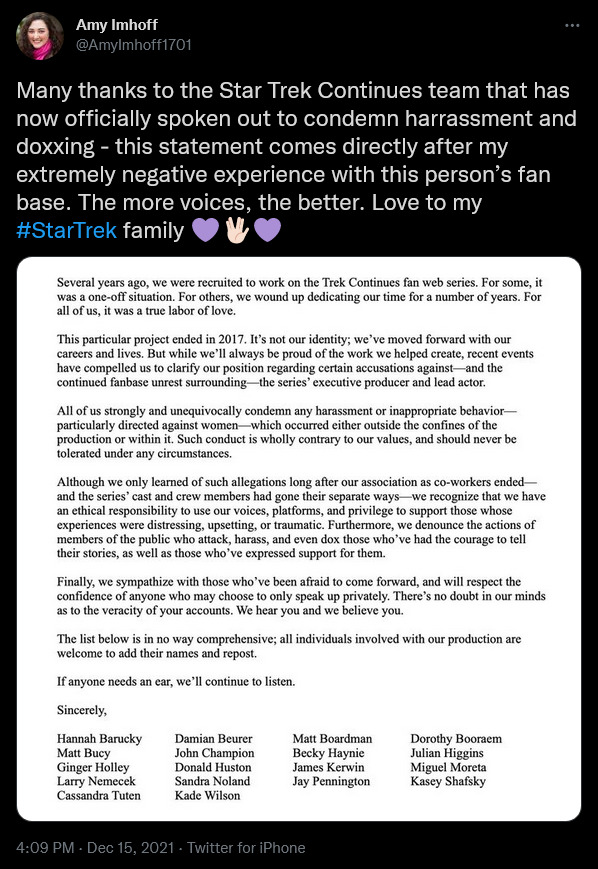 Produced between 2013 and 2017, Star Trek Continues was an ‘unofficial’ fan-series continuation of Star Trek: The Original Series created with the intent of finishing out the original show’s five-year mission.

Alongside Mignogna, the series featured a number of notable recurring and guest actors, including Mythbuster’s Grant Imahara as Hikaru Sulu, Star Trek: The Next Generation’s Michael Dorn as the voice of an ISS Enterprise computer, and Mignogna’s fellow anime voice actors Todd Haberkorn and Chuck Huber as Spock and Dr. McCoy, respectively. 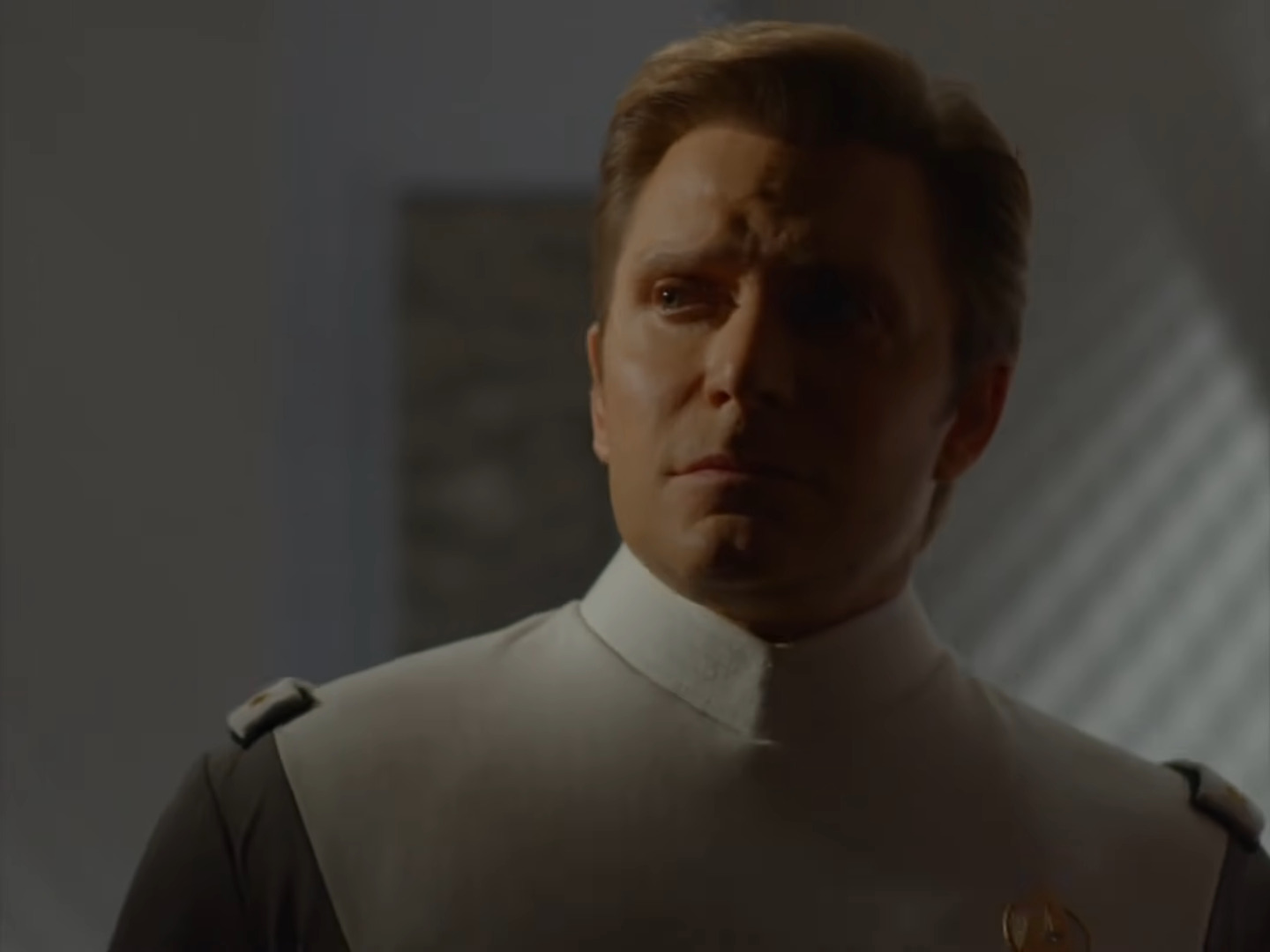 As of writing, Mignogna has not responded to his denouncement by the aforementioned members of Star Trek Continues team.

His lawsuit against Funimation, Monica Rial, Ron Toye, and Jamie Marchi for defamation is ongoing and is currently in the appeal process. A motion to dismiss the appeal was denied in the Court of Appeals Second Appellate District of Texas at Forth Worth. 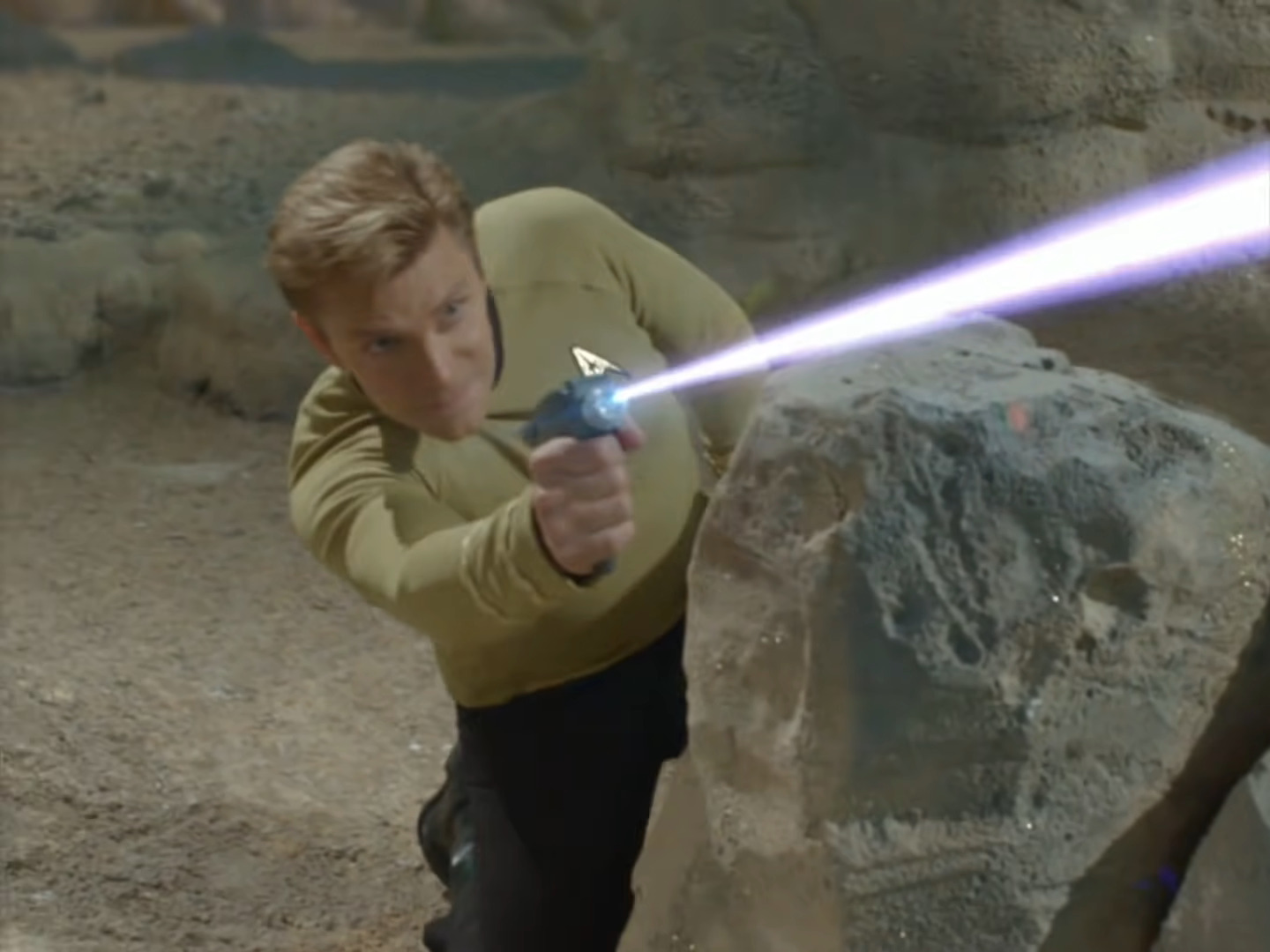 What do you make of members of Star Trek Continues’ cast and crew condemning Mignogna? Let us know your thoughts on social media or in the comments down below!