Star Trek: The Next Generation actor LeVar Burton appears to have admitted that he assumes the worst of white people based on an ill-conceived, paranoid notion that all white people feel the same towards him because of his own skin color. 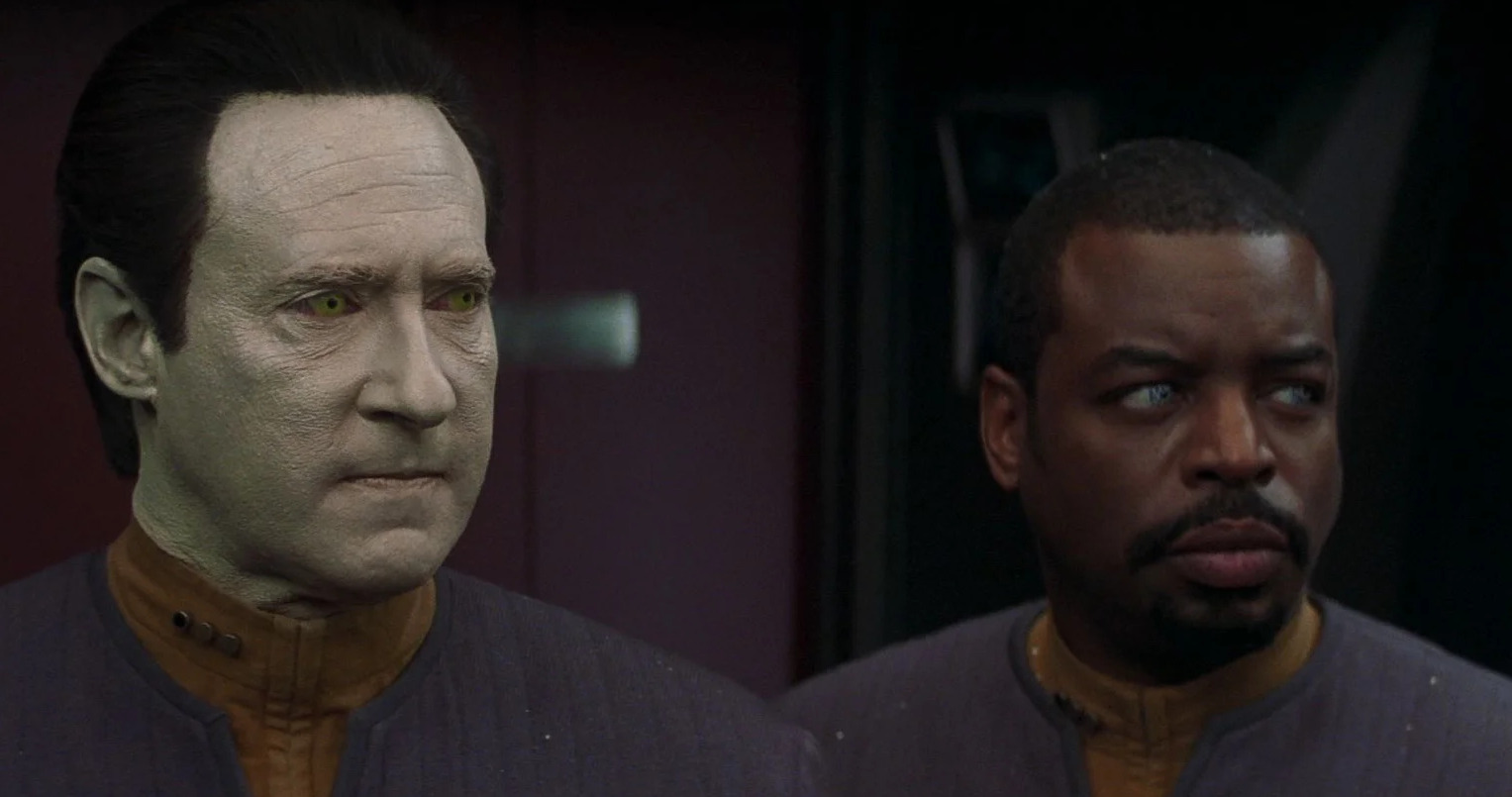 RELATED: Star Trek: The Next Generation Star LeVar Burton Says Geordi LaForge Never Finding Love Was Racist: “Those White Men Who Wrote The Show Had An Unconscious Bias That Was On Display To Me And To Other People Of Color”

Burton revealed his apparent feelings in response to Bounding Into Comics’ recent report on his own quoted assertion that the writers on Star Trek: The Next Generation harbored an unconscious bias against people of color.

“Whether they are aware of it or not, those white men who wrote the show had an unconscious bias that was on display to me and to other people of color,” Burton said to Rolling Stone associate editor Angie Martoccio during an interview published on November 26th.  “Their blind spot is revealed in the fact that a Black man never was successful at one of the basic and most … My wife says, ‘There’s a lid for every pot.’ It’s true. The idea that Geordi never found a lid for his pot is ludicrous. It’s preposterous, and it’s insulting.” 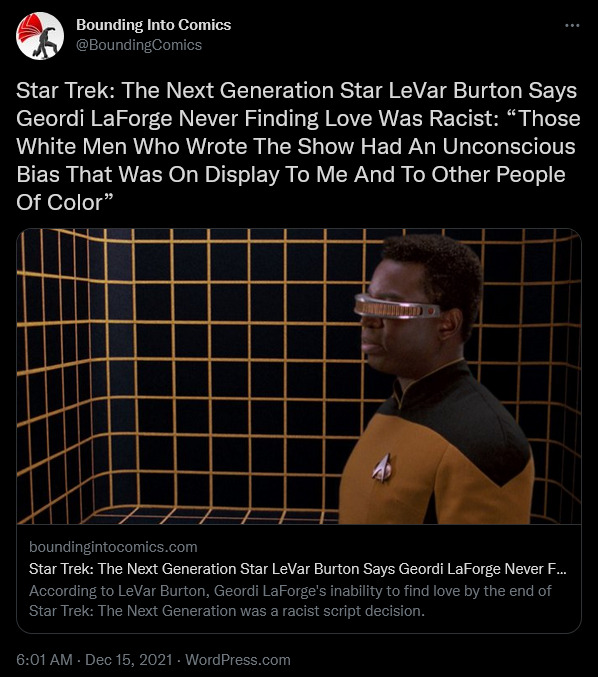 Based on his use of the common idiom “There’s a lid for every pot” – which has only ever been used in the romantic sense of finding one’s complimentary romantic partner – Bounding Into Comics reported that Burton’s claim of racism was based on LaForge ending his story without finding his ‘better half.’

Surprisingly, shortly after the article was published on December 15th, Burton himself replied to Bounding Into Comics’ official Twitter account writing, “CORRECTION: My comments to @RollingStone were critical about the writer’s insistence on the tired trope of the nerdy guy being uncomfortable around women. I never mentioned love. You did! Twice in your opening paragraph.”

Burton’s comment then garnered responses from two of Bounding Into Comics’ staff, which he proceeded to engage with for varying lengths of time.

Associate Editor Spencer Baculi (the author of this article) pointed out, “Mr. Burton, your main complaint to RS, as quoted, was ‘The idea that Geordi never found a lid for his pot is ludicrous. It’s preposterous, and it’s insulting,’” before asking, “Unless a new definition has arisen, ‘finding a lot for his pot’ refers to finding love, does it not?” 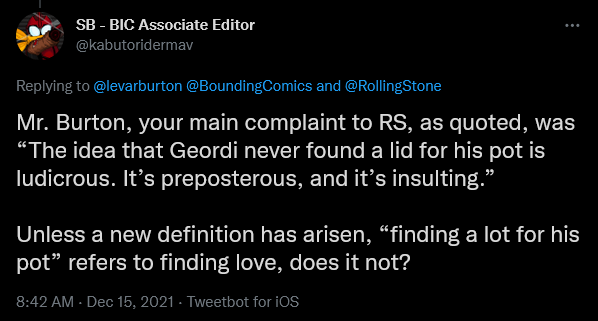 In a moment of peculiar disingenuity, Burton then insisted that the idiom could be used in reference to finding a sexual partner rather than a romantic one, replying, “It could, but did not in the context of the conversation I had with the @RollingStone journalist”.

The actor did not communicate any further with Baculi after this.

At the same time, Editor-in-Chief John F. Trent, writing from the official Bounding Into Comics Twitter account, also reflected Burton’s own words back at him, asking, “This isn’t about love? ‘The idea that Geordi never found a lid for his pot is ludicrous. It’s preposterous, and it’s insulting.’”

Rather than admit his possible misuse of the idiom may have communicated a different message than he intended, Burton further explained in defense of his ‘correction,’ “I was criticizing the lack of awareness on the writer’s part (unconscious bias) around the sex life of the character and how that creative choice lead to the character behaving like a miscreant sex offender in his stalking of the Leah Brahms character.”

“That’s not how Rolling Stone printed your conversation with them,” Trent once again noted, this time providing a screenshot of the popular entertainment magazine’s own article. 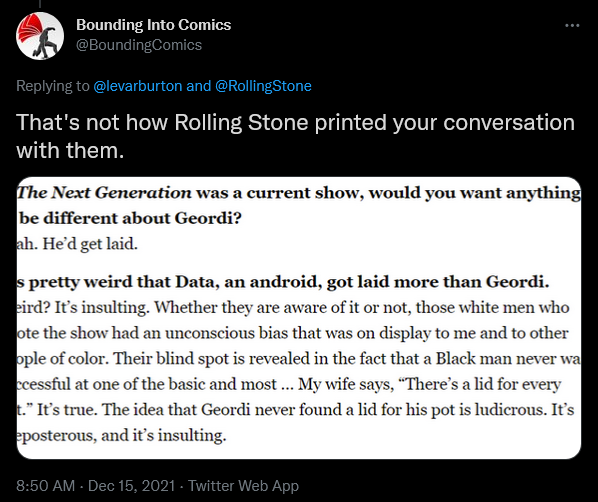 However, rather than continuing to stand tall in explaining his position – possibly because he realized that his argument held little water in the face of his own quoted words – Burton met Trent and the official Bounding Into Comics Twitter account with a block. 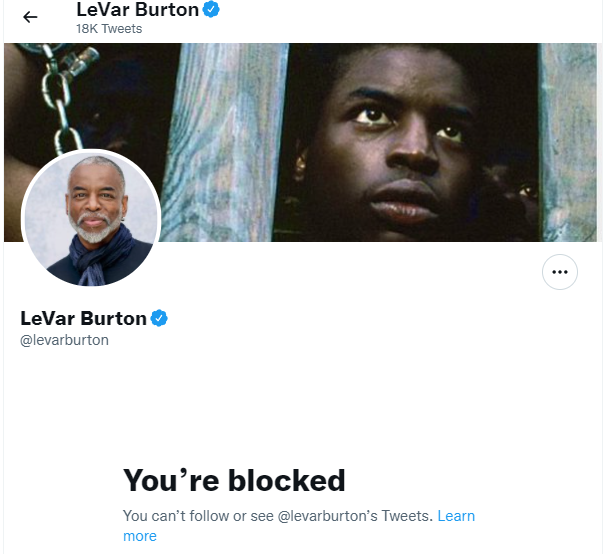 As these conversations began to catch widespread attention, and were joined by supporters on both sides of the argument, Burton’s claims of racism were questioned by @Azhagls, who asked the actor, “Is it possible that you just assume the worst about white people due to their race?”

Burton responded by informing the Twitter user, “No more [than] white people do me because of mine,”

What do you make of the conversation between Burton and Bounding Into Comics? Let us know your thoughts on social media or in the comments down below!