The attack on J.R.R. Tolkien’s The Lord of the Rings series continues as cultural vandals attempt to repeat their lie ad nauseum that Samwise Gamgee and Frodo Baggins are gay.

And it is indeed a lie, one that is easily disproved by actually reading The Lord of the Rings.

Nevertheless, these cultural vandals spewed their vile poison in the hopes that if they repeat their lie often enough people will eventually succumb and begin to believe it.

The latest effort to spread these lies comes after Twitter user WargarW theorized that if Hollywood was making The Lord of the Rings today “Aragorn would have been a woman (but Arwen still a she-Elf), Frodo & Sam would have been gay, Gandalf black & the only white male actors in the entire cast would have been Denethor, Gríma & Saruman. #Wokeness.”

In response, the cultural vandals came out of the woodwork. One wrote, “>Sam and Frodo would have been gay” >”would have.” They then shared a Spongebob meme asking, “How do we tell him?” 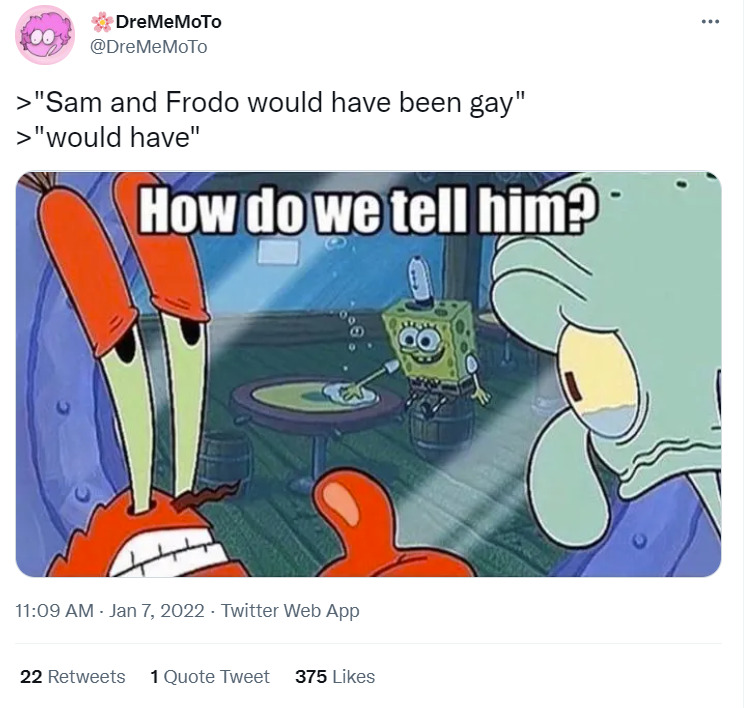 Ironically, this response came after the user mocked WargarW by quoting Twitter user toiletgun, who wrote, “twitter is 90% someone imagining a guy, tricking themselves into believing that guy exists and then getting mad about it.” 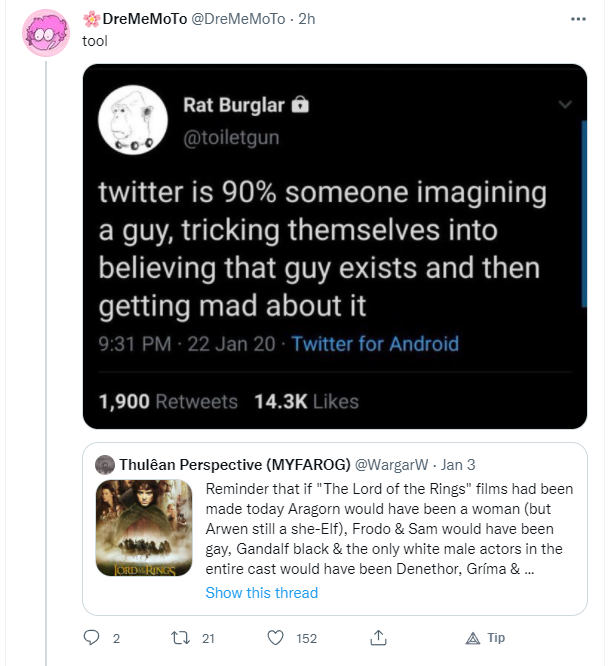 Clearly, “that guy” exists as DreMeMoTo proceeded to reveal they are “that guy.”

Twitter user MadzBrutal tweeted, “Everything else aside, imagine watching Lord of the Rings and not thinking Sam and Frodo are gay.” 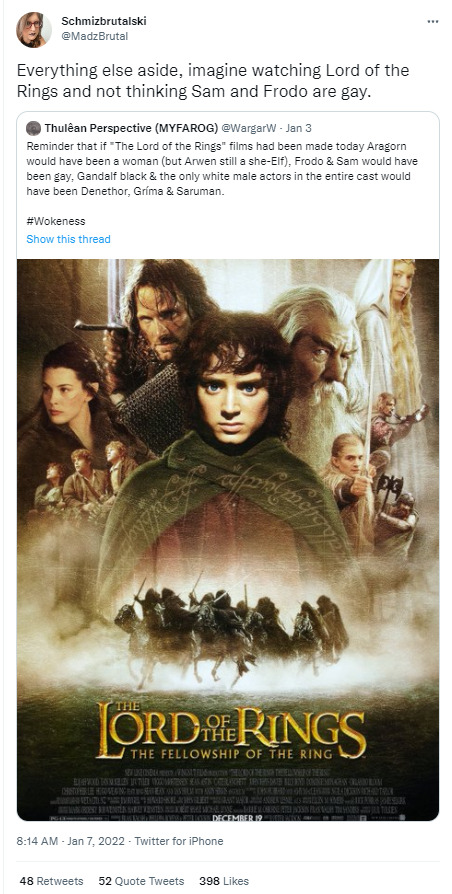 Another tweeted, “Sam and Frodo were gay when it came out in 2001 bro.” 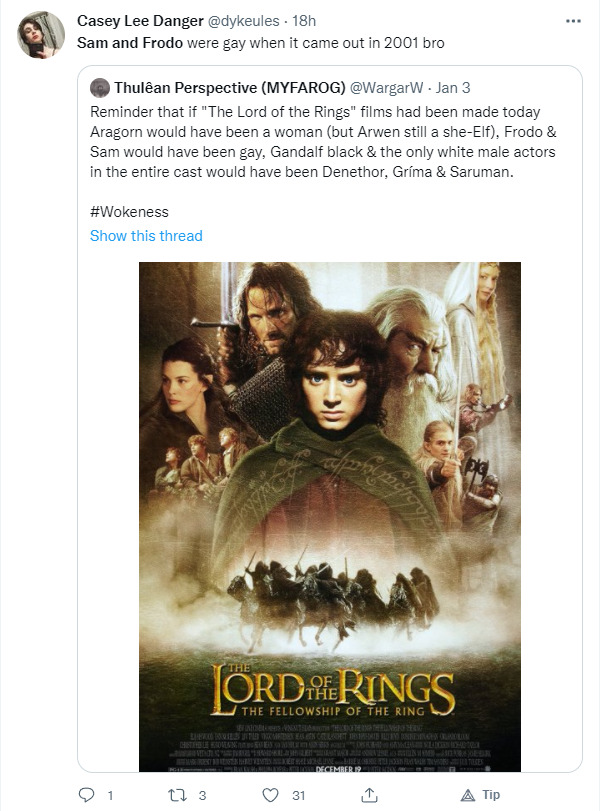 You get the picture, these people have an agenda to push and they will use every opportunity they get to push it. And it is my opinion they will continue to push it until their lie is accepted as truth.

Fortunately, it will never be the truth. In the final chapter of The Return of the King, Tolkien writes, “And so it was settled. Sam Gamgee married Rose Cotton in the Spring of 1420 (which was also famous for its weddings), and they came and lived at Bag End.”

Later in the chapter, Tolkien details, “Time went on, and 1421 came in. Frodo was ill again in March, but with a great effort he concealed it, for Sam had other things to think about. The first of Sam and Rosie’s children was born on the twenty-fifth of March, a date that Sam noted.”

In Appendix B of The Lord of the Rings, Tolkien would emphasize the birth of Elanor writing, “Birth of Elanor the Fair, daughter of Samwise. On this day the Fourth Age began in the reckoning of Gondor.”

Later on in Appendix B, in a section titled “Later Events Concerning The Members Of The Fellowship Of The Ring,” Tolkien reveals that “Goldilocks, daughter of Samwise” was born in 1431.

He again makes it abundantly clear that Rose is his wife writing, “Master Samwise and his wife and Elanor ride to Gondor and stay there for a year.”

Tolkien also documents the death of Rose in 1482 writing, “Death of Mistress Rose, wife of Master Samwise, on Mid-year’s Day. On September 22 Master Samwise rides out from Bag End. He comes to the Tower Hills, and is last seen by Elanor, to whom he gives the Red Book afterwards kept by the Fairbairns.”

He continued, “Among them the tradition is handed down from Elanor that Samwise passed the Towers, and went to the Grey Havens. and passed over Sea, last of the Ring-bearers.” 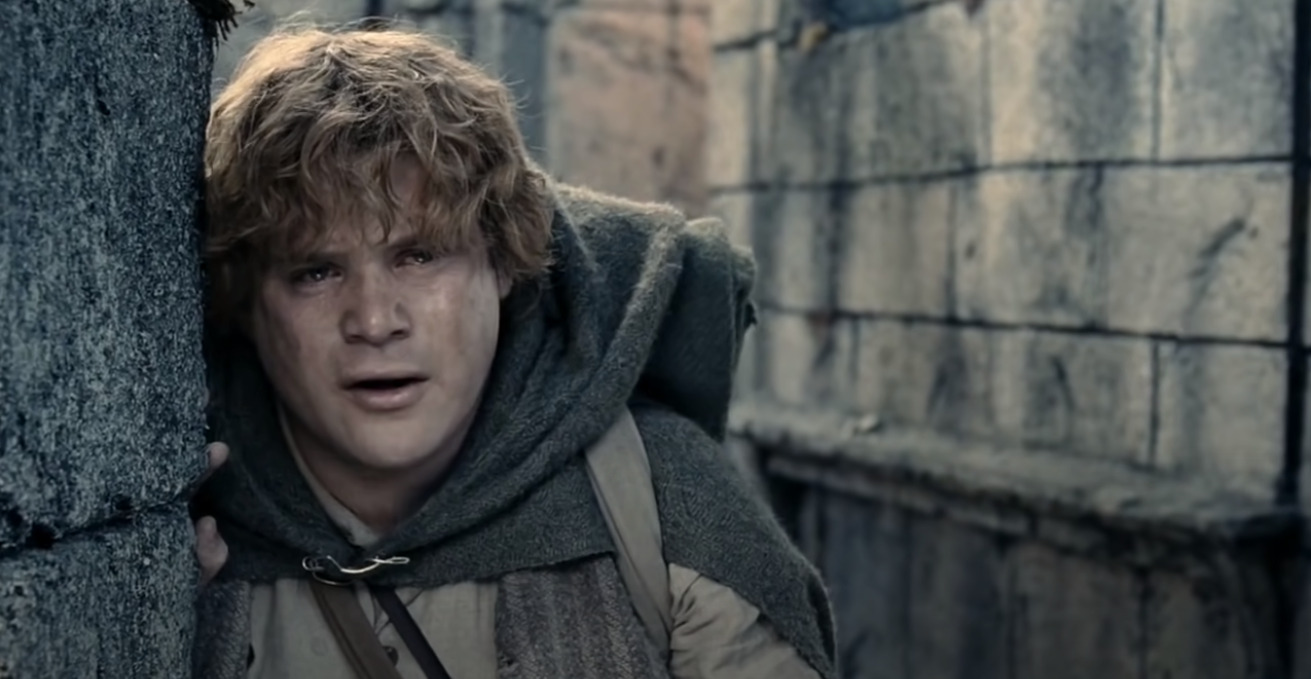 Not only does the timeline document that Sam and Rosie have two girls, but if you look at Sam’s family tree included in Appendix B it shows that the two have 13 children. 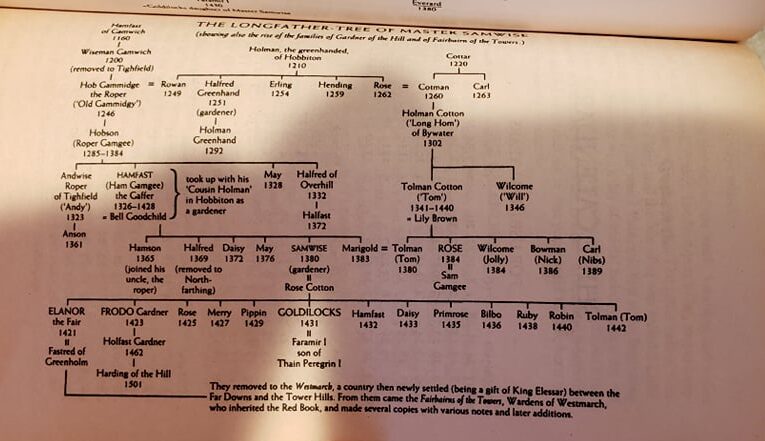 In Letter 131 from The Letters of Tolkien, Tolkien also discusses the relationship between Sam and Rosie writing, “I think the simple ‘rustic’ love of Sam and his Rosie (nowhere elaborated) is absolutely essential to the study of his (the chief hero’s) character, and to the theme of the relation of ordinary life (breathing, eating, working, begetting) and quests, sacrifice, causes, and the ‘longing for Elves’, and sheer beauty.”

Even if you haven’t read the books, and have only seen Peter Jackson’s adaptation of them, it’s abundantly clear that Sam and Frodo are not homosexuals.

In The Fellowship of the Ring, at Bilbo’s birthday celebration, Sam is clearly eyeing Rose as she dances and partakes in the festivities.

And then at the end of The Return of the King, just like in the books, he gets married to her.

And if you want even more evidence, Humphrey Carpenter detailed back in 1977 in J.R.R. Tolkien: A Biography that Samwise Gamgee was inspired by his fellow soldiers that he fought alongside in World War I.

Carpenter quoted Tolkien saying, “My ‘Sam Gamgee’ is indeed a reflexion of the English soldier, of the privates and batmen I knew in the 1914 war, and recognised as so far superior to myself.”

Tolkien would echo these comments in a letter written to H. Cotton Minchin dated April 16, 1956. That letter states, “My ‘Samwise’ is indeed (as you note) largely a reflexion of the English soldier—grafted on the village-boys of early days, the memory of the privates and my batmen that I knew in the 1914 War, and recognized as so far superior to myself.”

On top of this Tolkien scholar John Garth describes the relationship between the two characters, “The relationship between Frodo and Sam closely reflects the hierarchy of an officer and his servant [in the First World War]. Officers had a university education and a middle-class background. Working-class men stayed at the rank of private or at best sergeant.”

He detailed, “A social gulf divides the literate, leisured Frodo from his former gardener, now responsible for wake-up calls, cooking and packing. British masculine reticence and class-consciousness problematised the communications between batmen and officers, the odd couples of the battlefield. Tolkien maps the gradual breakdown of restraint [through prolonged peril] until Sam can take Frodo in his arms and call him ‘Mr Frodo, my dear.’”

“By then, the hierarchy is largely inverted. Frodo moves towards a childlike dependency: he presents the problems, Sam the solutions,” he asserts. “In the First World War this process was far from atypical. Officers were given commissions for class reasons, not because they were experienced soldiers or leaders; whereas the privates and batmen often had the age, experience, and wisdom their official superiors lacked.”

Garth goes on to cite C.S. Lewis’ own personal experience, “C.S. Lewis, for example, had played Frodo to his sergeant’s Sam. ‘I came to pity and reverence the ordinary man: particularly dear Sergeant Ayres,’ Lewis recalled. ‘I was a futile officer (they gave commissions too easily then), a puppet moved about by him, and he turned this ridiculous and painful relation into something beautiful, became to me almost like a father.’”

“With the help of Sam’s homely chatter, Frodo even laughs on the edge of Mordor. ‘Such a sound had not been heard in those places since Sauron came to Middle-earth,’ Tolkien notes. This is the kind of laughter that war correspondent Philip Gibbs [in Now It Can Be Told] believed acted as ‘an escape from terror, a liberation of the soul by mental explosion, from the prison walls of despair and brooding’ on the Western Front,” he concludes.

It’s crystal clear that Sam and Frodo are not homosexuals, and if you try to project that onto them, you are either delusional, or sinisterly pushing a disordered agenda.

NEXT: Lord Of The Rings Fan Site Implies That J.R.R. Tolkien, As A Catholic, Would Celebrate LGBTQ