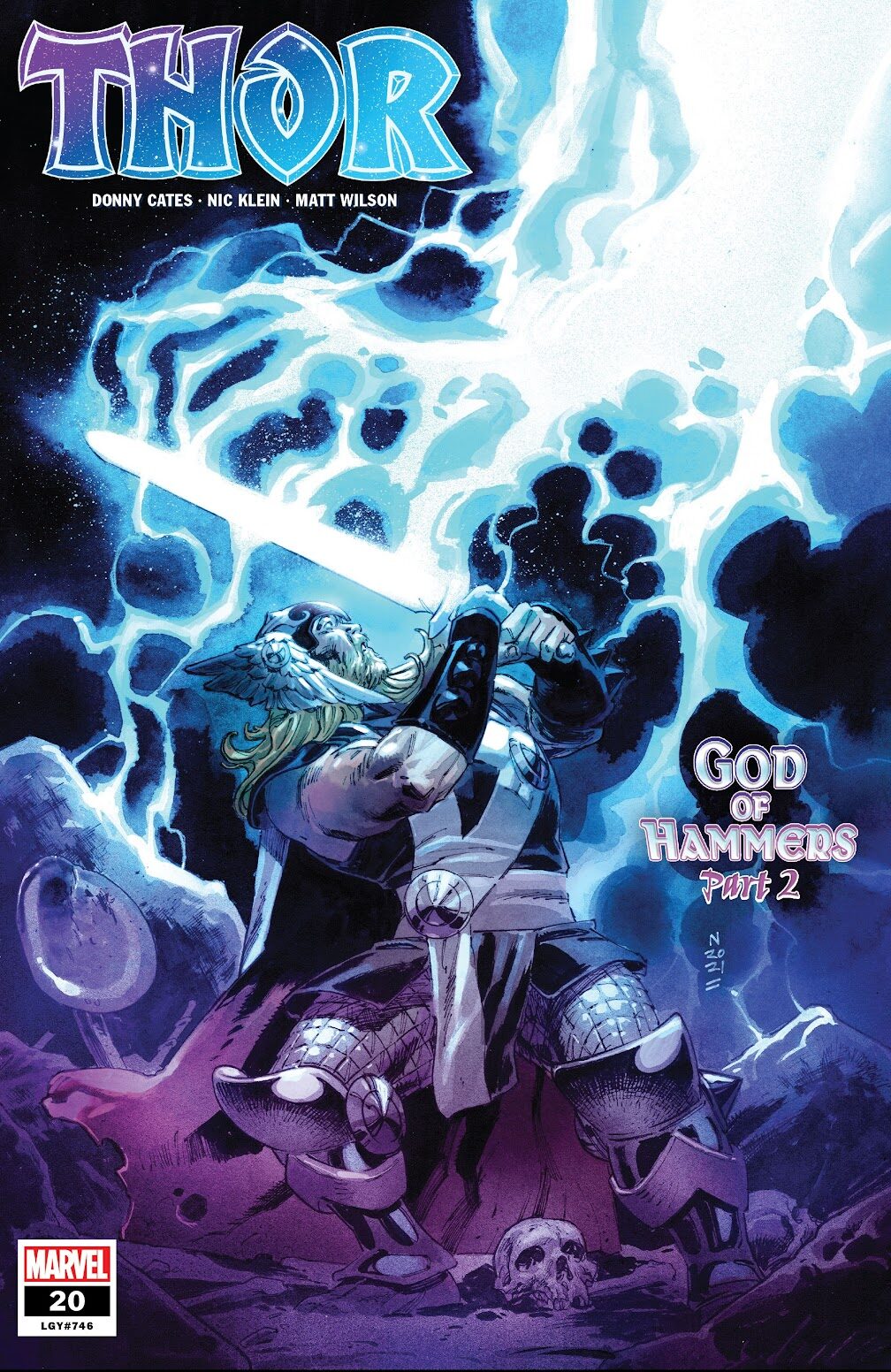 In Marvel Comics, Thor, wielding his hammer, debuted in Journey Into Mystery #83 back in 1962.

In that issue written by Stan Lee and Larry Lieber with art by Don Heck, Jack Kirby, and Steve Ditko, Doctor Donald Blake is transformed into Thor after he discovers an ancient cane. He discovered the cane after fleeing a cave following his discovery of the the arrival of a number of alien rock creatures. 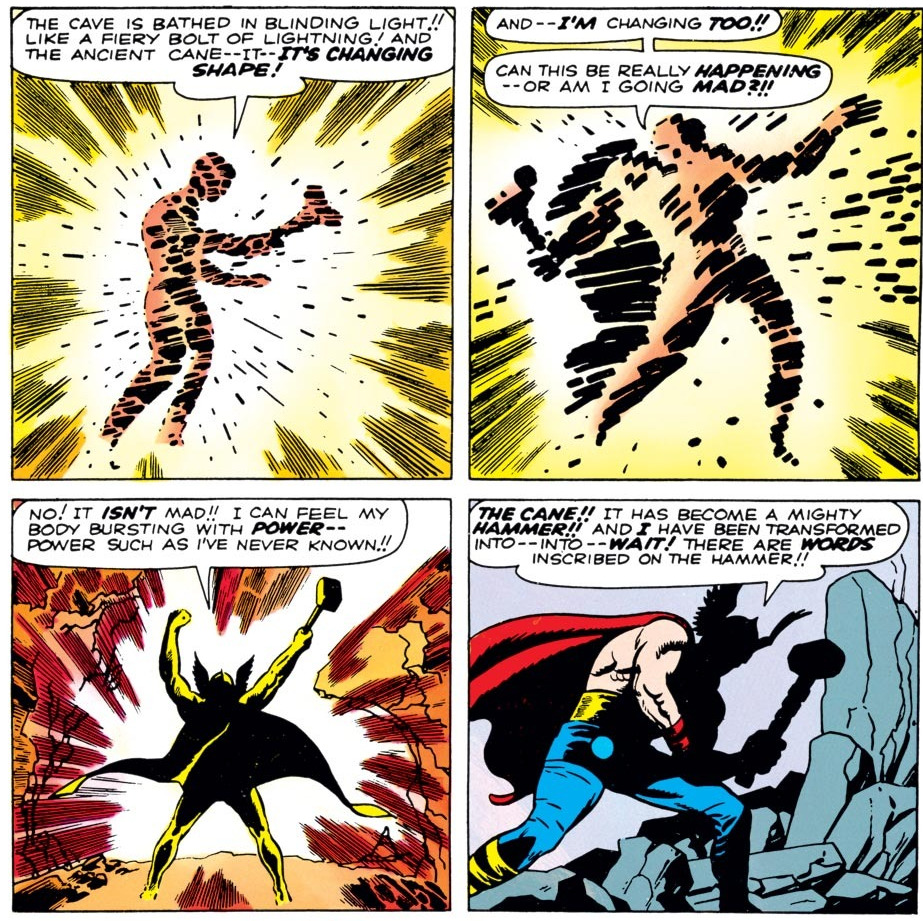 The inscription on the hammer read, “Whosoever holds this hammer, if he be worthy, shall posses the power of… THOR” 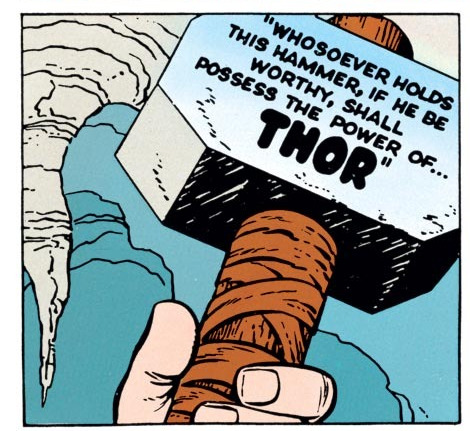 In Thor Annual #11 by Alan Zelenetz, Mjolnir is commissioned by Odin as one of three treasures to be finer than Odin’s spear Gungnir.

One of the Dwarves tells Odin, “Now, by your leave, a gift unlike any in all the realm–the hammer Mjolnir forged of mystic uru metal. It is a qunique weapon of matchless strength, my lord. And invulnerable to destruction!”

Odin would then add his own enchantments to the hammer saying, “To Mjolnir’s natural properties, I shall add my own divine enchantment. Henceforth, no one shall be able to wield this hammer lest he be worthy… And ever shall this mallet return to the hands of him who hurls it… And ever shall the thunderous storm and the very elements on high respond to Mjolnir’s summons!” 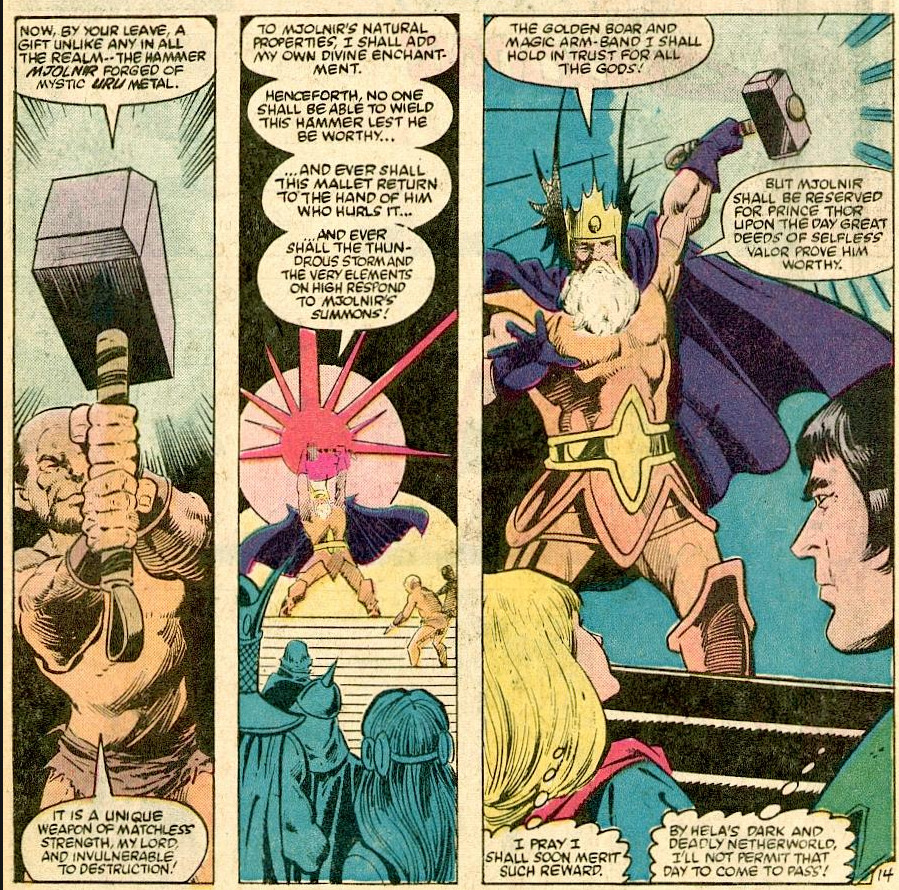 This origin would be slightly altered in 2004 when Michael Avon Oeming and Daniel Bergman told their version of the the creation of Mjolnir in Thor #80.

The book states, “Odin sought out the great Dwarf craftsman Eitri to make the hammer Mjolnir. Eitri used the heart of a sun to forge a mold with which he birthed Mjolnir, greatest weapon of all time! His creation is a work blessed with magic, blessed by the Odin Power!” 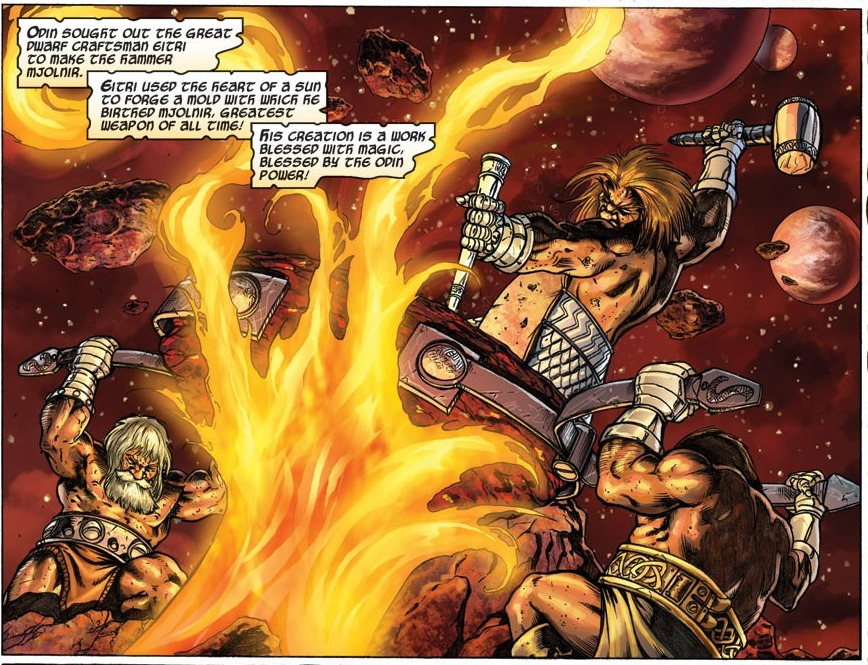 This history along with the hammer’s original inscription would be altered by Jason Aaron when he turned Jane Foster into Thor.

First, the hammer’s inscription was changed. Aaron changed it to read, “Whosoever holds this hammer, if she be worthy, shall possess the power of…Thor.” 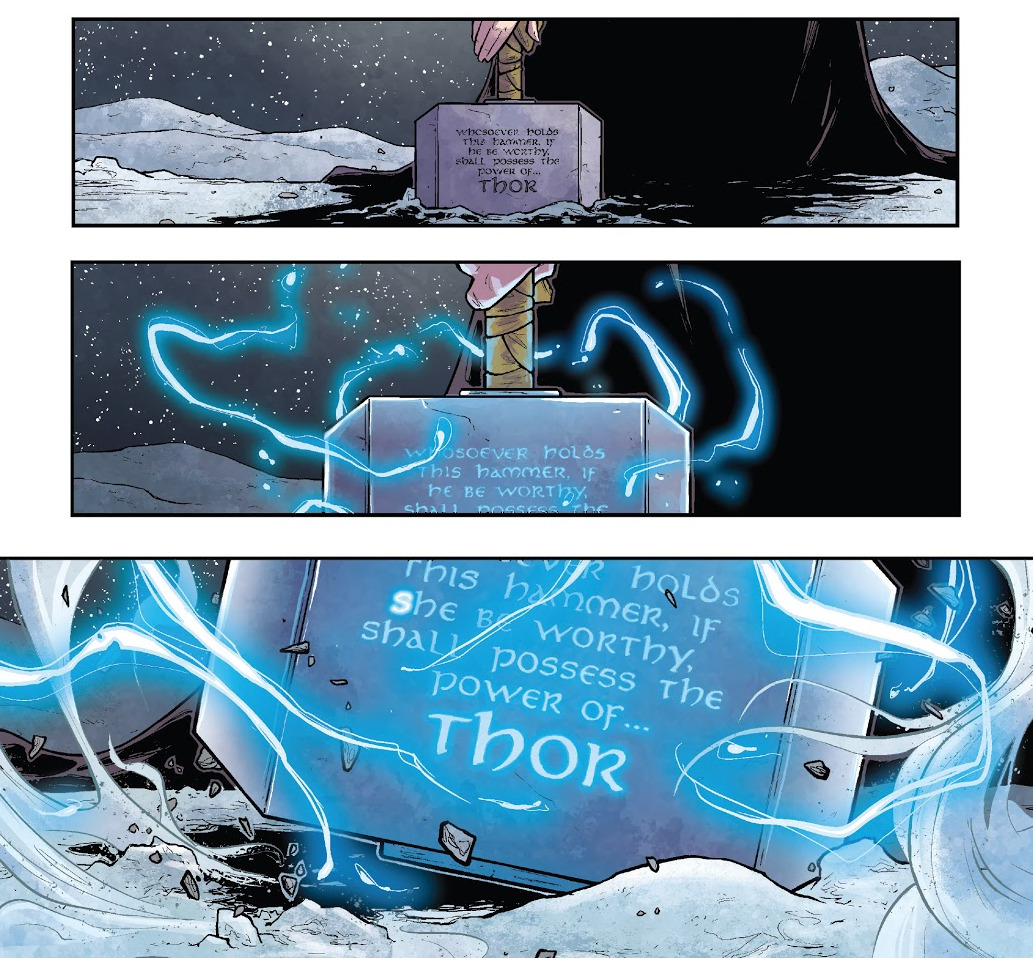 Aaron would continue to alter Mjolnir’s history in his The Mighty Thor series. In The Mighty Thor #12, Foster visits Omnipotence City, where the Lord High Librarian tells her, “Many different tales have been told about how that hammer of yours first came to be. Some say Odin had it forged as a gift for his young son. Others say the All-Father wielded the himself, many centuries before Thor was even born.”

“The tales always mention the Dwarven forges and the mystical enchantments and the unbreakable uru. But one very important element of the hammer’s story has been forgotten. The Storm,” he assert.” 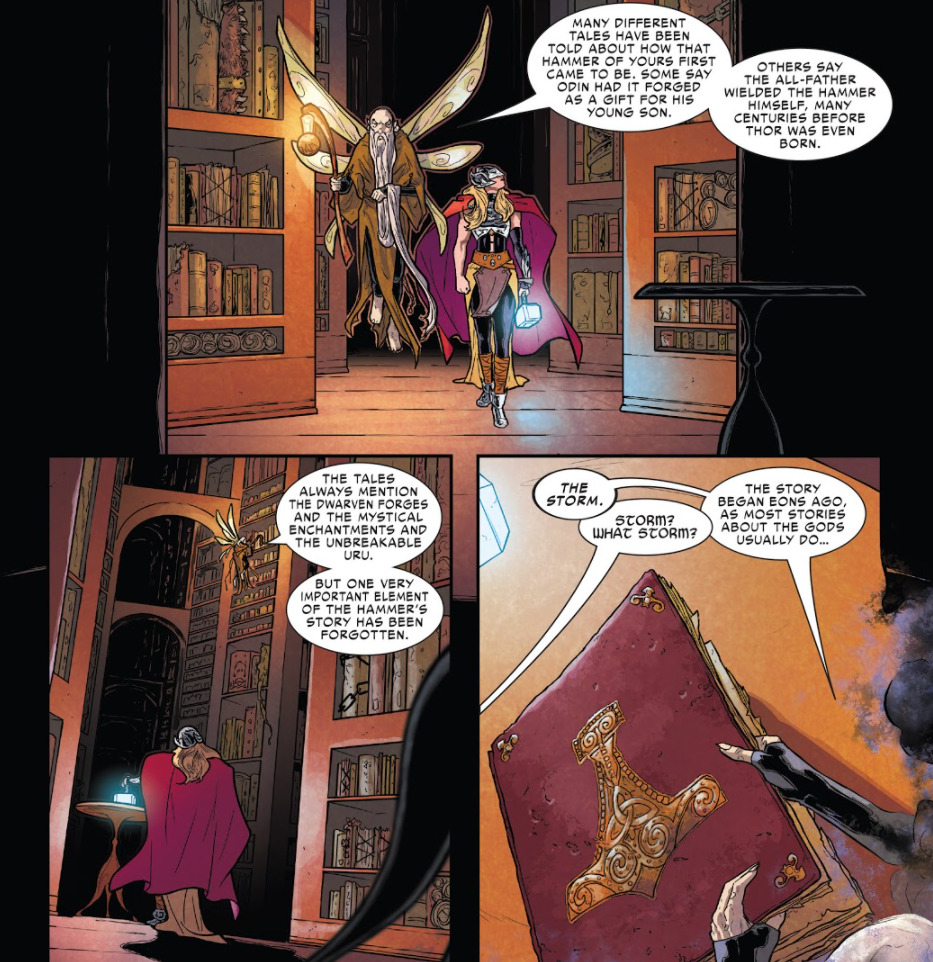 The book then tells of a battle between Odin and the God Tempest, the Mother of Thunder, described as a “sentient super storm.” Eventually Odin defeats the storm, trapping it within a piece of pure uru that had been gifted to him by the Dwarves of Nidavellir.

After trapping the being in the stone, he tasks the Dwarves to craft him a weapon, which they do. Upon attempting to take up the weapon, the storm takes Odin for a ride almost destroying all of Asgard.

In order to safeguard the weapon, Odin placed enchantments on it. 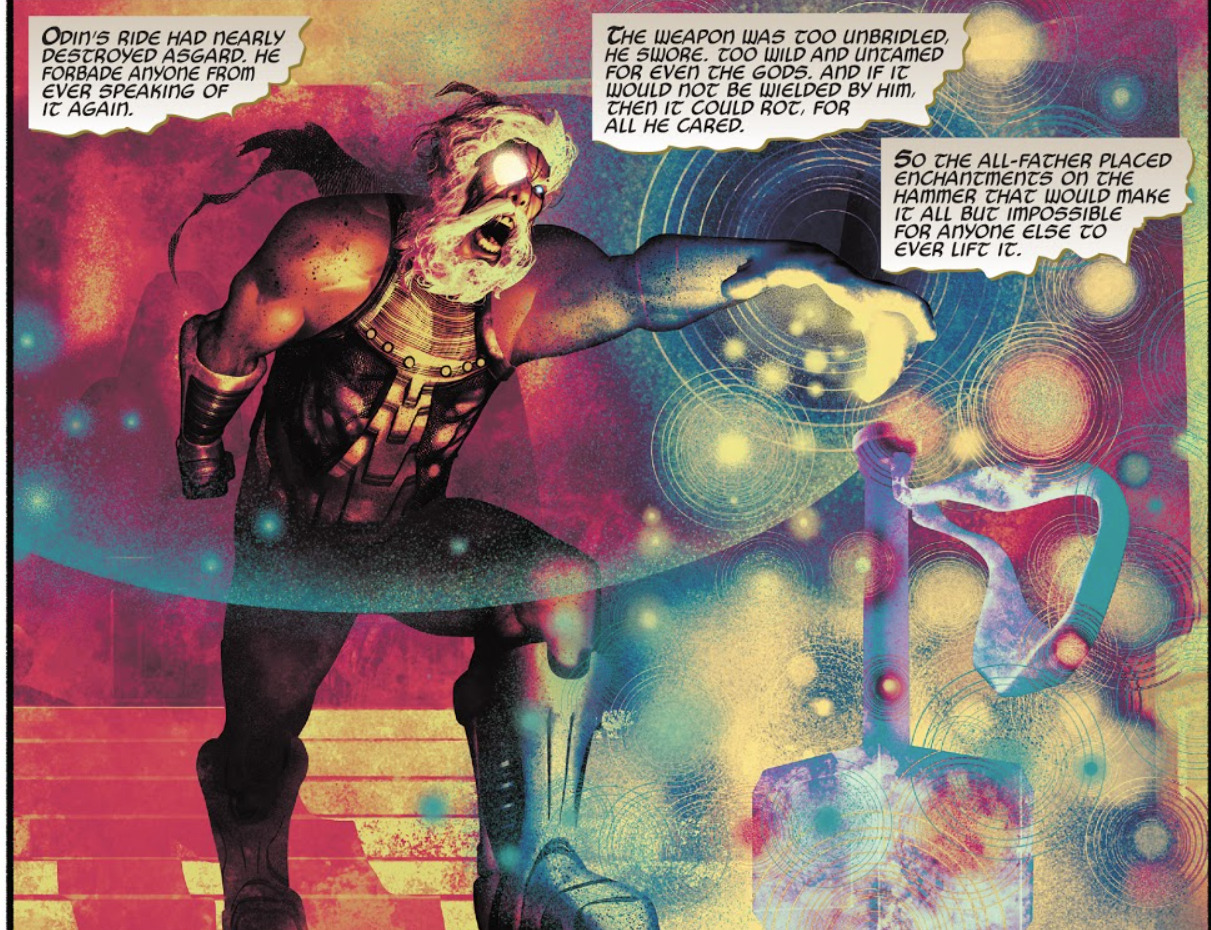 The Lord High Librarian would tell Foster that he believed the storm had finally died, but nevertheless the hammer appeared to be acting of its own free will, sending Foster crashing out of Omnipotence City into space.

Not only would the hammer charge into space without Foster wanting to do so, but she also claims the hammer spoke to her.

RELATED: Marvel Studios Executive Claims Thor: Love And Thunder Pushes “The Boundaries Of What’s Comfortable And What Should Be Expected”

Now, in Donny Cates’ most recent issue of Thor, Thor #20, it is revealed the storm is still alive, and it’s now calling itself the God of Hammers as well as Mjolnir. It has also taken on the shape of a woman that can wield itself. 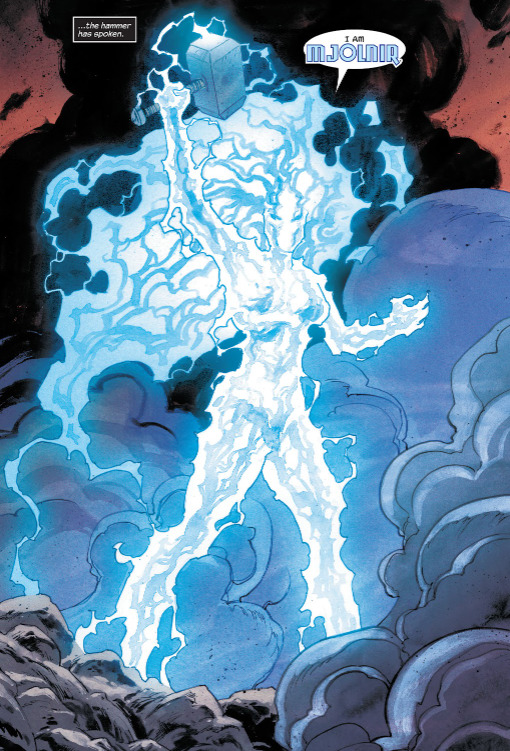 Not only does it take on the shape of a woman, but it’s also been going across the stars destroying everything in its path including Nidavellir, Jotunheim, and the town of Broxtown. 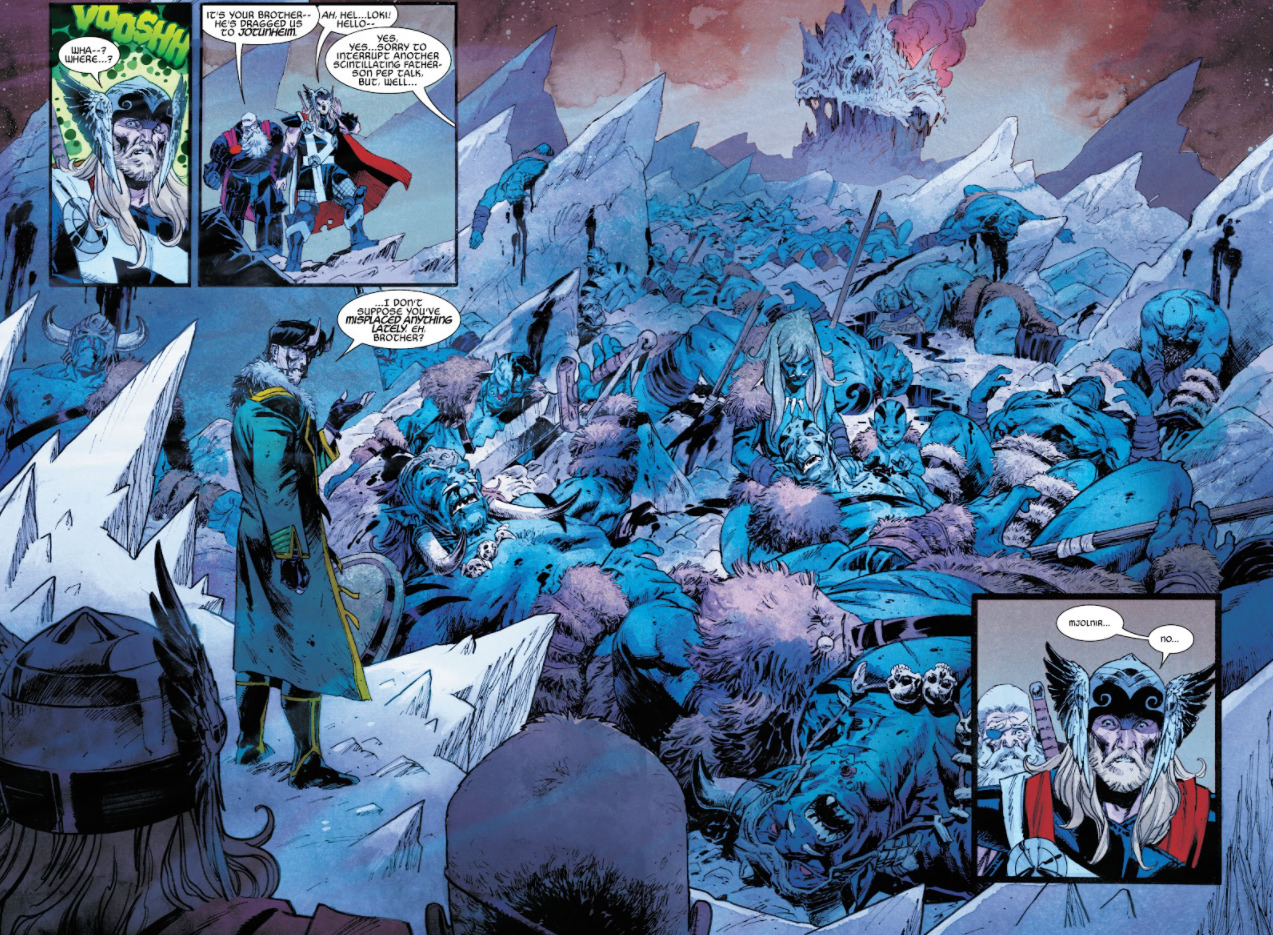 What do you make of Donny Cates and Marvel Comics doubling down on Jason Aaron’s retcon of Mjolnir?

NEXT: Natalie Portman Confirms Her Jane Foster Will Have Different Powers Than Chris Hemsworth’s Thor