A ResetEra user claims to have learned details regarding a new Armored Core title, even sharing some screenshots from the alleged game. 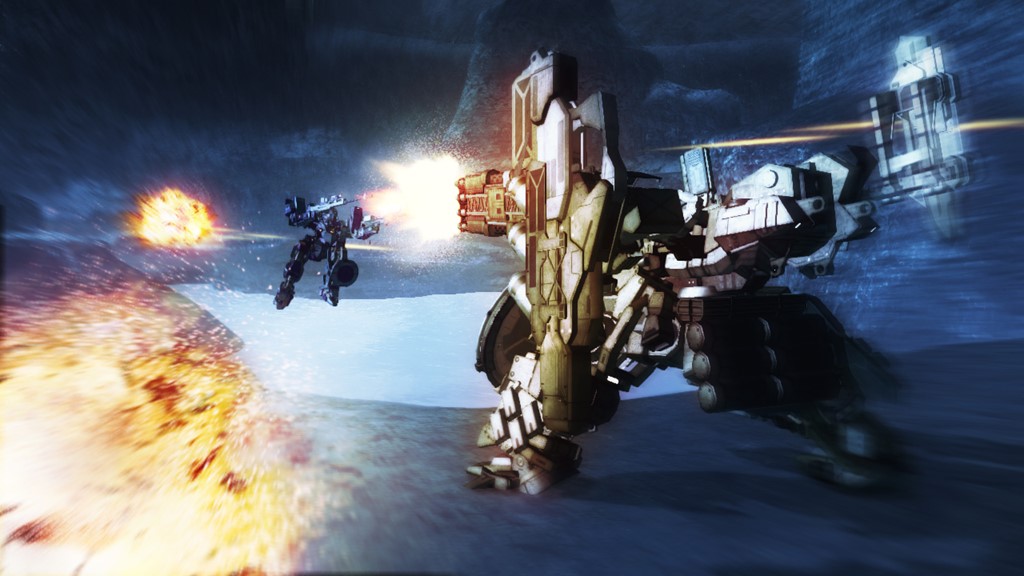 On January 8th, user Red Liquorice (hereafter called Red) posted that they had been privy to these details, as well as some screenshots and gameplay footage, thanks to completing a consumer survey reportedly centered around a new entry in the series.”

“I’ve just finished doing a consumer survey about a new Armoured Core game with description, screenshots and two 30 second-ish videos of gameplay – the first a boss fight and the second more in-world gameplay, a snow area,” they wrote. “The screenshots are unique ID watermarked, so probably not a good idea to post but I did screenshot the text description.”

Though concerned that what he had posted might be in violation of the forum’s rules, Red revealed that they had been “pretty amazed to be watching footage of an upcoming From Soft game randomly this morning, quite unexpected!!”

Red then shared screenshots of the alleged survey, in which it was described how the upcoming title would center around the effects of “an unknown substance” dubbed Melange on a mysterious planet known as Bashtar.

“In the past, this substance caused a cosmic catastrophe on planet Bashtar that engulfed the surrounding star systems, and eventually its very existence was lost,” the survey continues. “Decades later, the Melange reaction was confirmed again on planet Bashtar. In search of the unknown substance that should have been lost, various speculations begin to swirl. Various parties are getting involved; the government, corporations, cultists, and unknown mercenaries… The protagonist is one of them.” 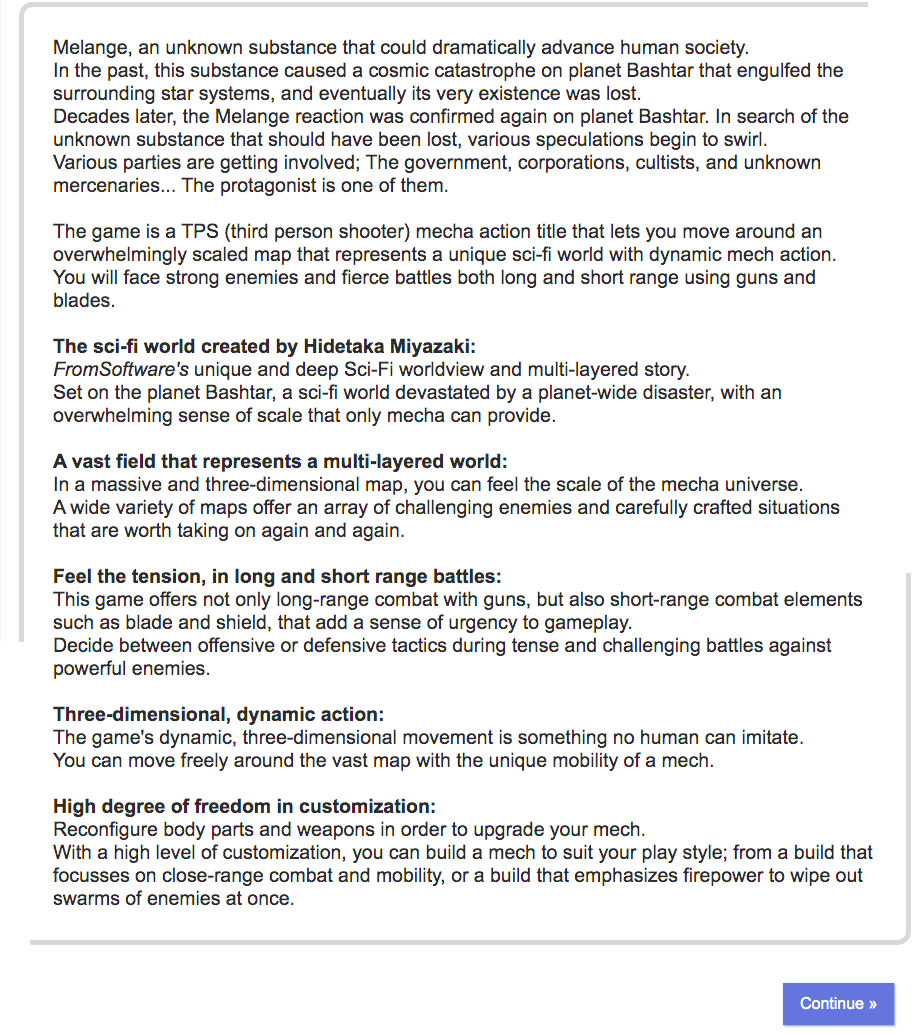 Interestingly, it should be noted that Melange is also the name of the Spice in Dune, while Bashtar is a military rank of the within the series’ elite Sardaukar forces.

As such, it’s likely these are not the official names of the given subjects, but more likely development codenames used to obscure the game’s true identity.

Suspicions aside, the alleged survey describes the game as a third-person shooter set in a “sci-fi world created by [Armored Core 4 and Dark Souls] producer Hidetaka Miyazaki, with a multi-layered story, three-dimensional map, and challenging foes and situations promising replay value. Along with tree-dimensional movement, players will also be able to enjoy the series’ signature mech and weapon customization system. 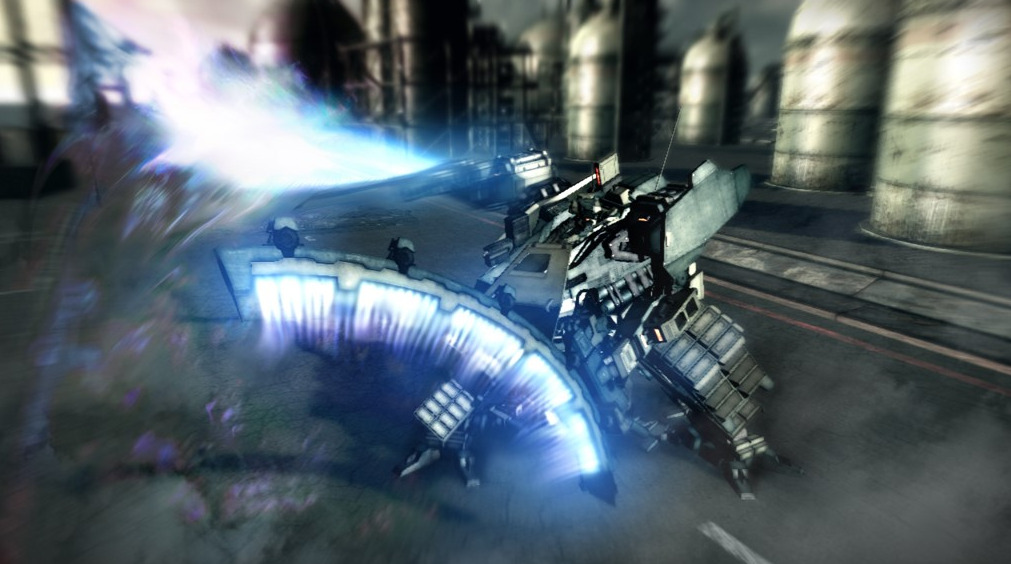 They further stated that they had seen a boss fight featuring a white mech fighting a larger robot with a laser sword in “Souls-style” combat and in long-range battle with shooting mechanics akin to Virtual On.

This may mean that, like in the Souls series, bosses will have an intimidating presence and utilize animations designed to bewilder and baffle players by forcing them to learn their patterns of attack. They also noted that they were shown the boss’ health bar, which appeared in red LED style with angular edges rather than a straight rectangle.

The alleged video showed the player starting on the opposite side of a large room, shooting at the boss- a mech with a large domed head larger than the player- before quickly moving in and alternating between attacks and dodging.

Red speculates this is an early boss, as “it didn’t seem grandious [sic] or particularly impressive as an encounter.” 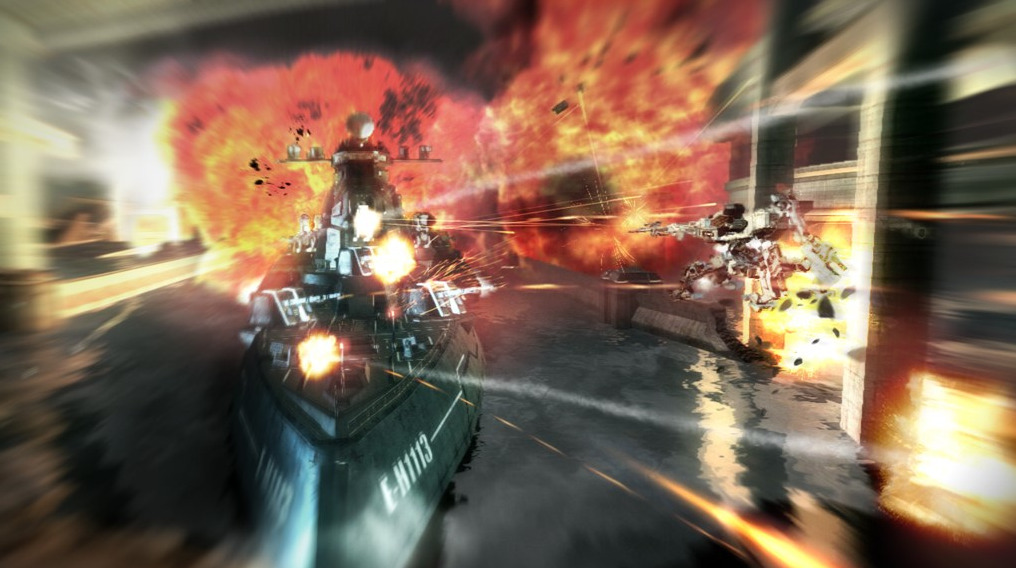 In a second video, a player character be seen following other players or NPCs – possibly enemies due to the circular target that appeared over them) in the distance – through a snowy area towards a large wall or gate.

While vast and also Soulslike, it was not a castle- but a short warn down structure. It could be that, in the keeping with their penchant for rendering impressive environments, the architecture of Bashtar will reflect the aforementioned devastation surffered at the hands of Melange.

Asked about the game’s appearance, Red admitted that he was “not a graphics guy” and found the he “could only say it looked like a modern mech game, I wasn’t blown away by the graphics or anything but it didn’t scream last gen either.”

Further noting that they weren’t a mech fan, Red stated that they were “not worried about FromSoft’s art direction” before recalling how “[from] what I saw I’d say the designs were more utilitarian than flashy.”

“Like the humanoid mecha didn’t have ornate shoulder guards and leggings,” they added. “It wasn’t robot knights, it all looked like angular square machinery to me except the boss had a dome head.”

The survey also listed possible titles for the game, among which were either variations on Armored Core 6 or VI, some with subtitles, and others not even mentioning the franchise name at all.

As for release platforms, Red said that the survey did not mention anything regarding any sort of platform exclusivity.

Eventually, Red discovered they had sixteen total screenshots which they had previously mistaken as purely concept and environmental art.

Though they were cautious to upload the screenshots from the survey in the original thread given that they were emblazoned with an watermark, they eventually relented, doing their best to obscure the identifying text before sharing them publicly.

These screenshots can be viewed in the respective ResetEra thread. 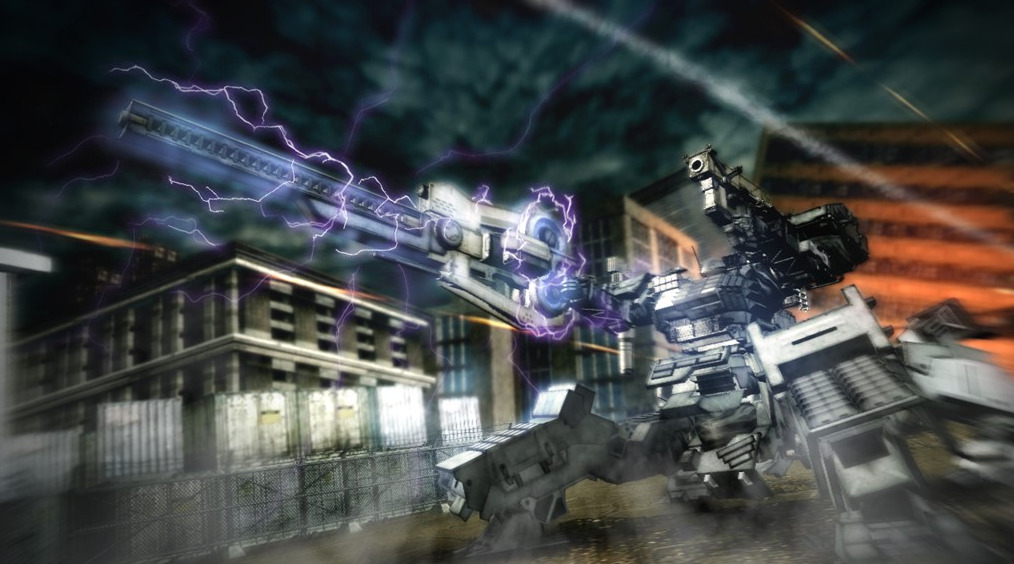 While Red’s post is far from any sort of official confirmation, their information does line-up with a December 2020 4chan post which claimed a spiritual successor to Armored Core had started development in 2019 shortly after Sekiro: Shadows Die Twice was released that featured “bosses like Dark Souls or Sekiro” and combat switching between melee and shooting.

It also claimed that the game would take place on a post-apocalyptic Earth – though not stated outright – and would see the player take orders from an A.I. supercomputer named SETH, slowly growing to question its authority as you gain more experience.

Further, according to the the 4Chan post, the game is set to launch Q1 or Q2 2022, possibly March or April, on PC, PlayStation 5, and Xbox Series X|S. 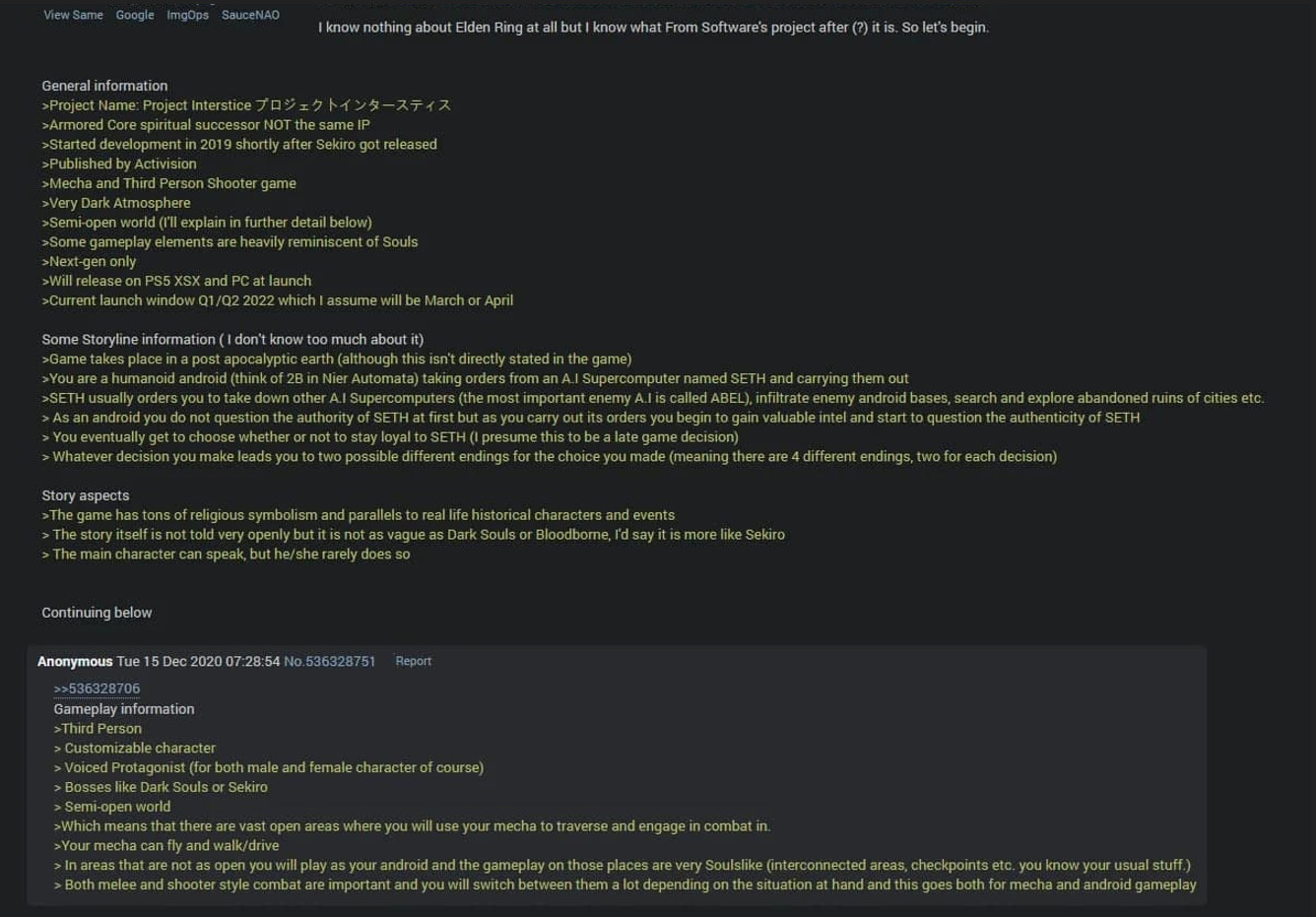 What do you think? Is this shaping up to be the Armored Core game you’d want? Do you believe the information? Let us know on social media and in the comments below.