In a recent interview with W Magazine primarily discussing her most recent film Passing, Thompson was asked by Lynn Hirschberg, “You also play Valkyrie in Thor. What are her skills?”

The actress responded, “She has weird skills, to be honest. She can sense when someone is close to death, and she takes them into Valhalla, which is essentially the afterlife.”

Valkyrie has been shown to revive people in the comics albeit it was with the help of Clea. In The Fearless Defenders #7 by Cullen Bunn and Stephanie Hans, Clea performs a spell that allows the human Annabelle Riggs to return to the land of living.

After the spell’s conclusion and Riggs returns to the land of living, the cost of the spell is that Valkyrie and Annabelle Riggs share the same body, but are able to switch between each other at will. 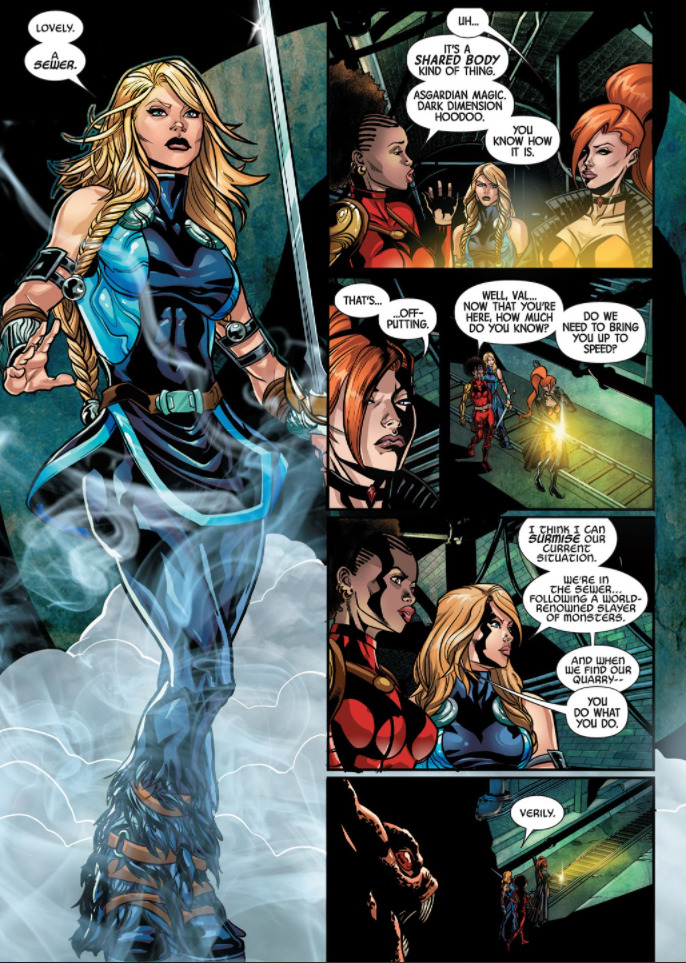 In The Fearless Defenders #12, the final issue of the miniseries, Valkyrie bluntly tells Riggs, “There is no us. From the moment the All-Mothers leashed me to you like a wild hound to its master…I’ve been becoming less who I was…and more who you are.” 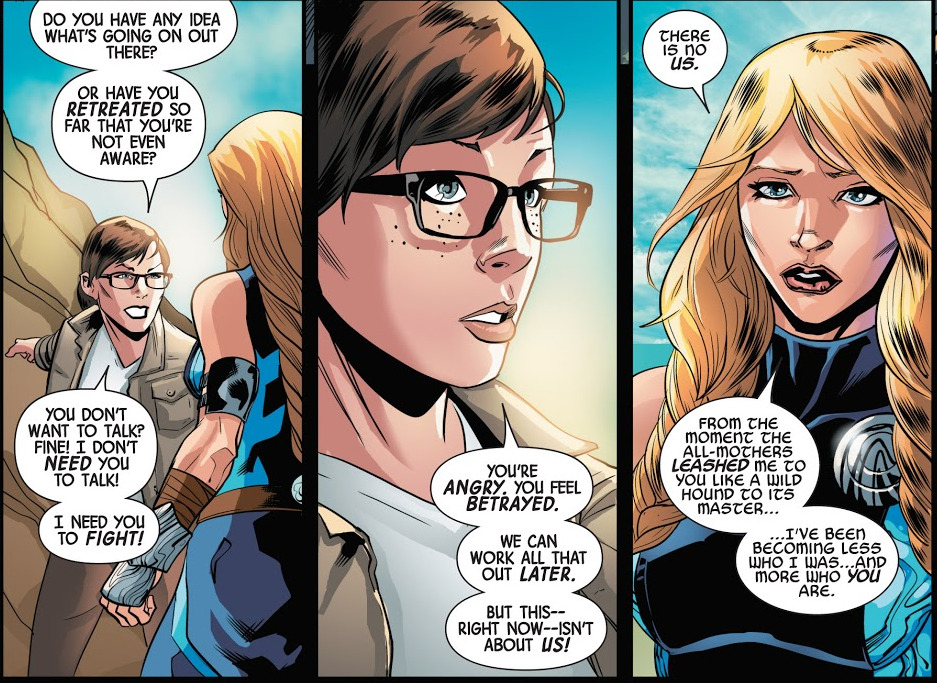 “I was more than willing to sacrifice everything to bring you back. But to give away so much…for one who forces me to bend my knee…it hurts,” Valkyrie added.

However, Valkyrie would eventually be convinced to fight and she takes over the body she shares with Riggs and wades into battle. 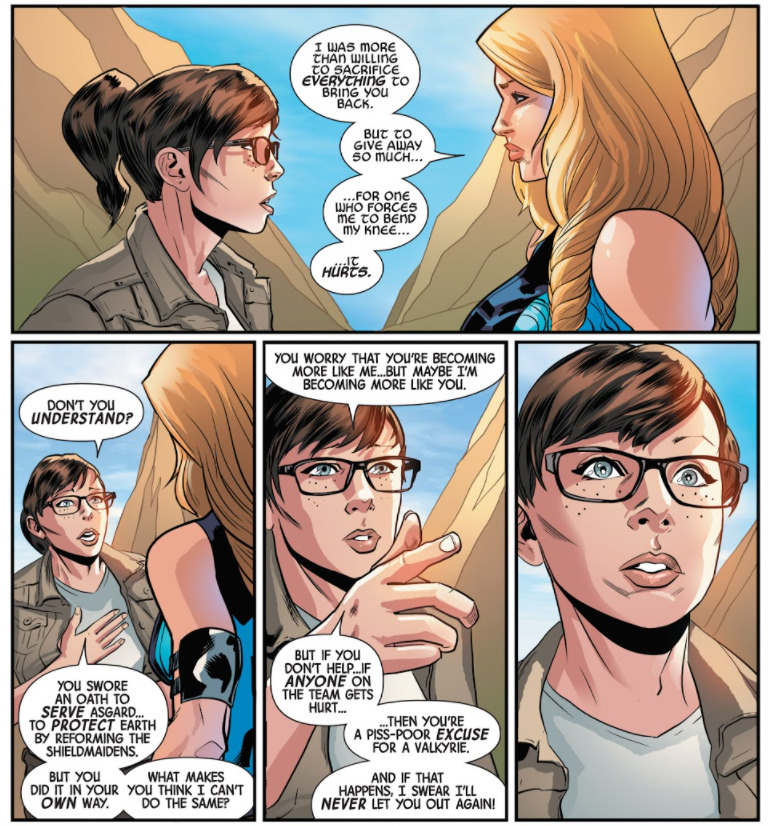 It is possible that Thompson might be referring to Riggs’ first appearance in The Fearless Defenders #1 when she kissed Valkyrie after the Norse hero alongside Misty Knight save her from a number of undead creatures.

While Riggs would kiss Valkyrie, as you can see below, Valkyrie breaks it off and tells her, “Now is not the time.” 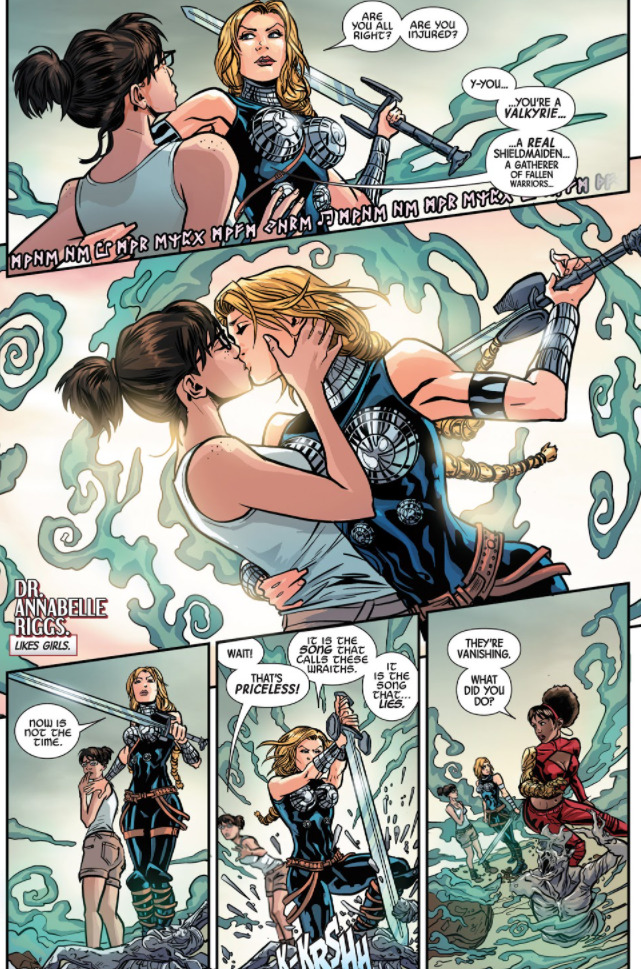 As far as Valkyrie being a god, she was able to easily take down Loki and apprehend a wounded Thor while on Sakarr. However, she along with numerous other Valkyries were easily defeated by Hela when Loki tapped into one of Valkyrie’s memories.

The idea of her sensing when people are close to death and taking them to Valhalla that’s an ability she has had in the comics for awhile and was showcased in Secret Avengers #14.

In a flashback sequence after being defeated by Odin’s forces, he commissions her to become his Valkyrie telling her she has the following duties, “When they perish in the fields of war, you will carry the souls of deserving warriors to a place called Valhalla–where they shall know everlasting peace.” 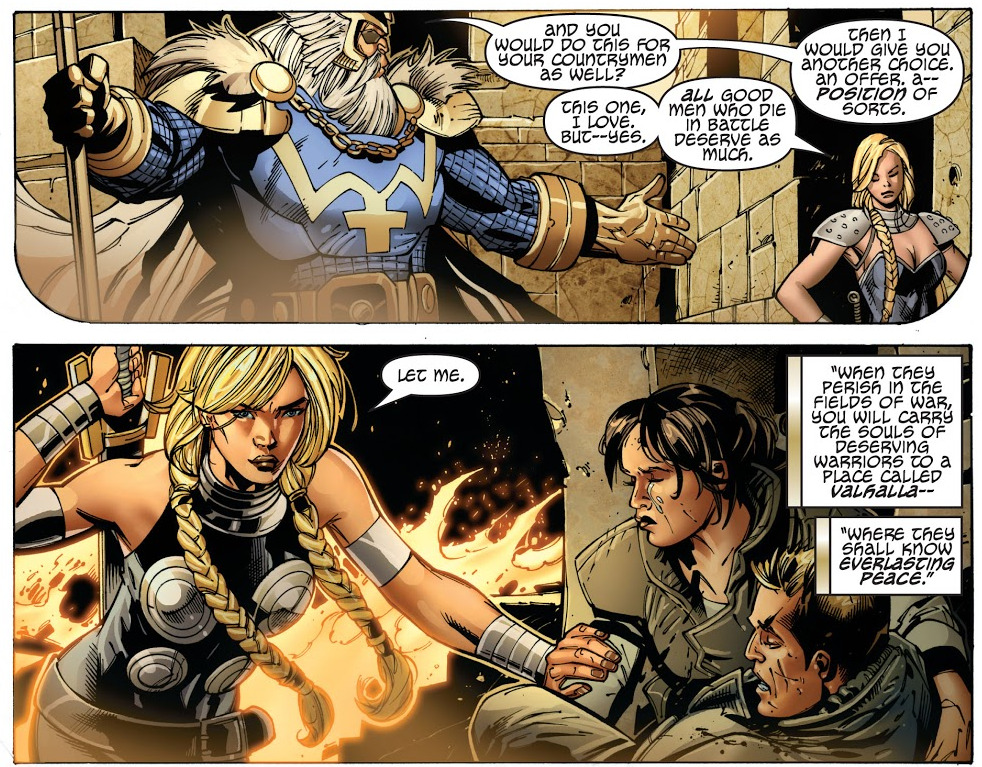 Odin added, “You will be their protector and their guide, when they leave the mortal realm. But you will be more as well, you will be a symbol. Men will commit great acts of bravery and sacrifice, for just the hope of glimpsing your face. You will inspire them.”

“And I give you my word, girl, if you do this, one day, many ages from now, when your service is finished–you will join your lot there, in paradise.”

“This is your calling, Brunhilde of Wrlstead Arms, if you would have it–you will be my Valkyrie.” 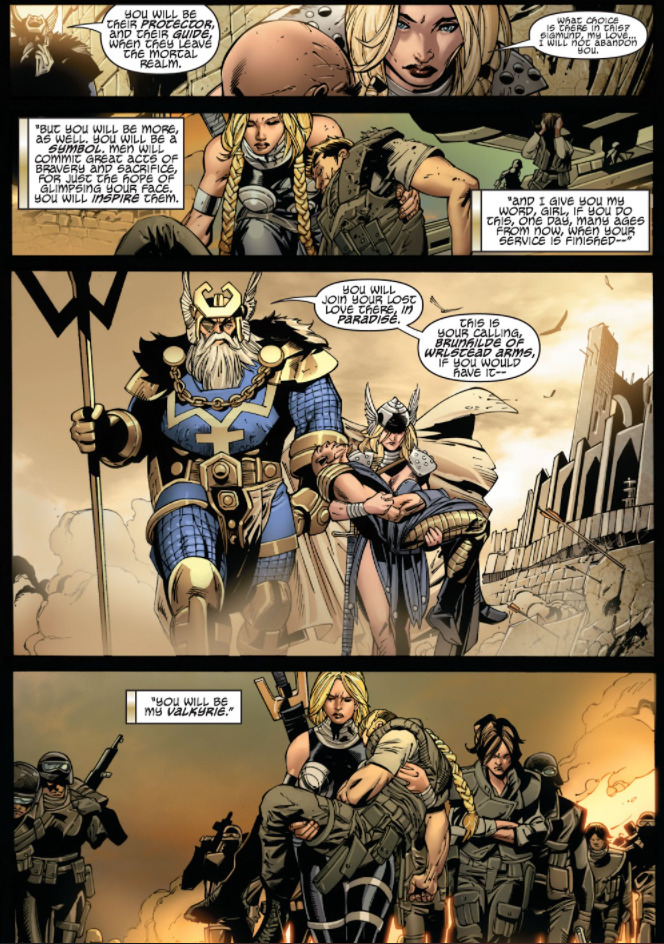 In that same issue it’s shown that Valkyrie is able to see whether or not certain individuals will die on the battlefield.

She’s shown telling a group of soldiers, “Most of you are going to die today.” 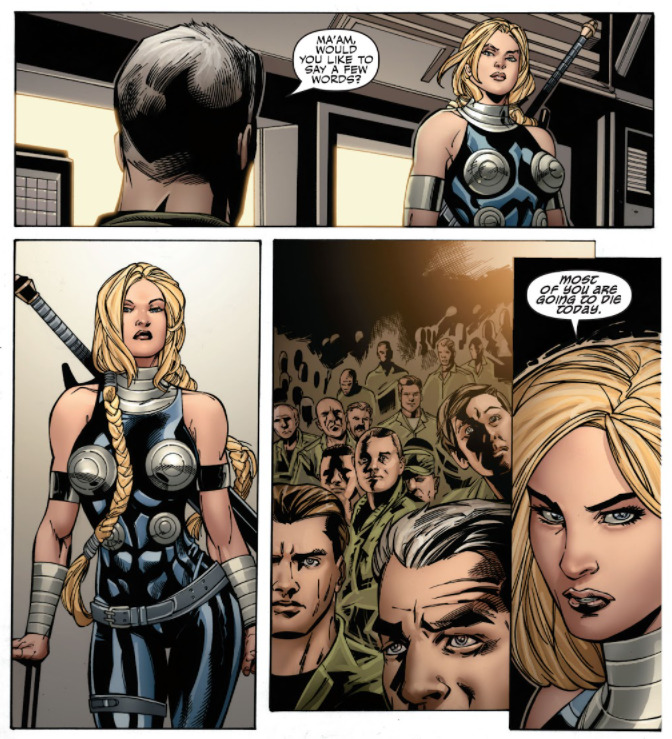 What do you make of Tessa Thompson’s claims about Valkyrie’s skills and abilities?