In the opinion of DC and Marvel artist Mark Brooks, any creator who chooses to declare themselves a member of Comicsgate is making “a foolish, terrible choice,” not least of all because he believes the movement’s prominent figures to be “alt-right conmen.” 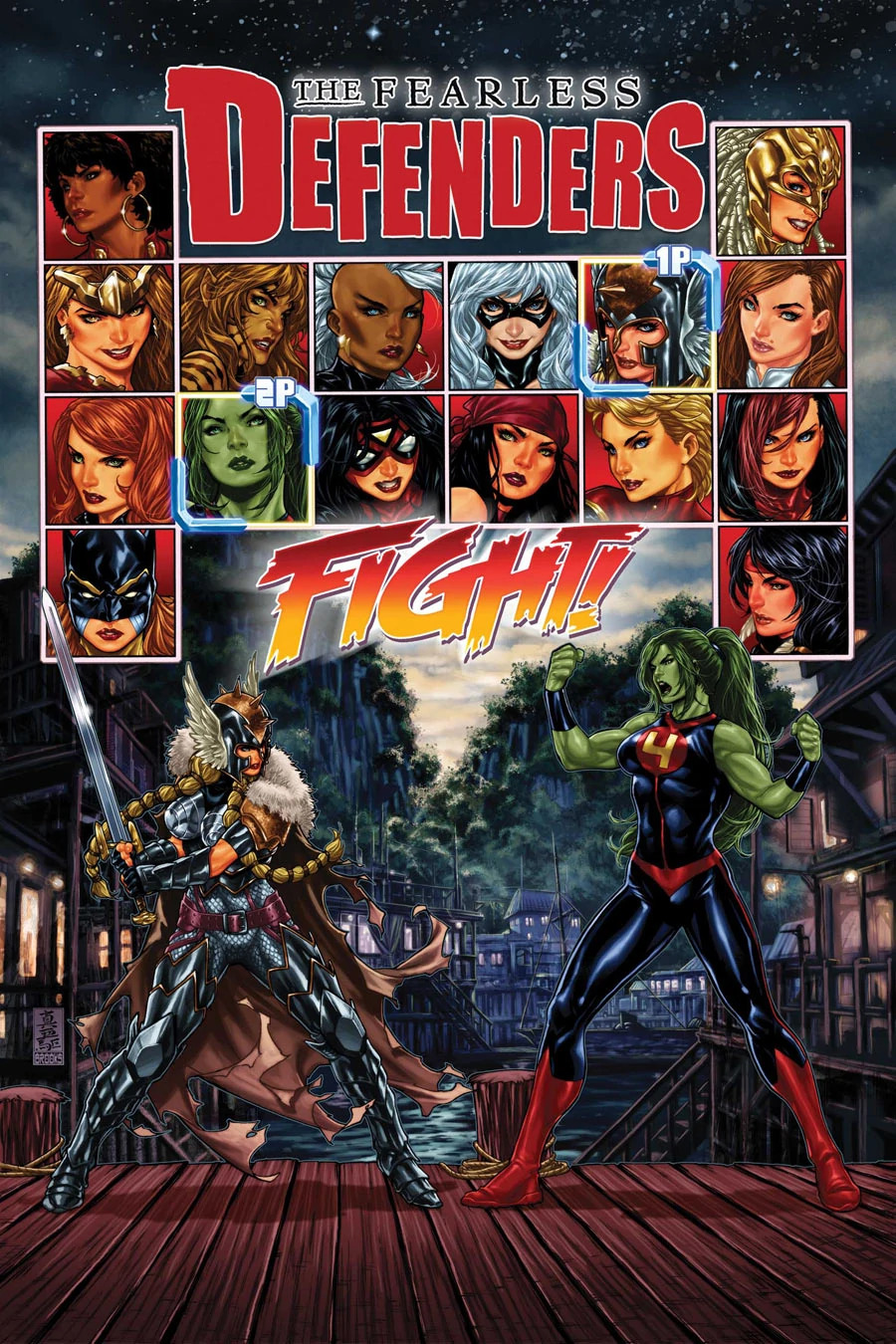 Brooks shared his thoughts on Comicsgate in response to artist Don Edwards, who on January 19th declared that “after searching my core beliefs, my love of comics, love of country and a few @EthanVanSciver livestreams, I am officially declaring myself as #comicsgate.”

“I had been led to believe they were the boogie men of comics. Nope. We just love comics and hate seeing what the SJWs and bleeding heart liberals have done to what was once good old fashioned all American fun,” he asserted. “Comics. Good v evil. Nothing #comicsgate does promotes hate or bigotry or tries to hold back the progress or beliefs of any one.”

“We welcome you all and wish you would join us on our quest to make original quality comics and not be tricked into  buying whatever agendas or trending behaviors the marketing people at the ‘big two’ are pushing for a quick cheap buck when all you wanted was a superhero comic,” he concluded his brief thread. “I am #comicsgate and I make comics.”

Taking notice of Edwards’ thread roughly three days after it was initially published, Brooks replied to the newly-Comicsgate affiliated artist on January 22nd with the warning, “This is foolish terrible choice.”

“You are entitled to have a wrong opinion,” said Edwards, to which Marks countered, “And so are you, as exhibited right now.”

In turn, Edwards asked, “Dude. Why do you want to bully me?”

“I am literally a no one to you,” he told Brooks. “Done nothing to you except support you in the past by being a fan. What gives you the right to try and tear me down on a public forum? And why do you keep tagging EVS? Go with God, dude. Leave me alone.” 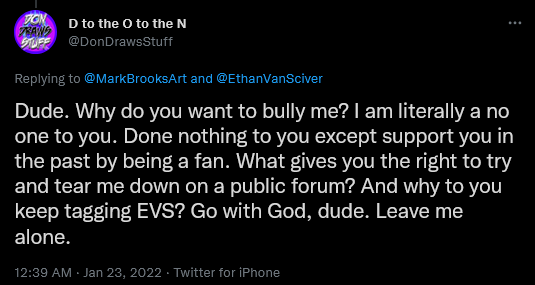 Brooks then explained, “You’re a stranger to me but you’re a fellow artist. I’m responding to you because I do actually care. Unlike the folks you’re joining up with. I hope you see that one day.”

He added, “Thank you for your fandom, I hope it continues,” before asking Edwards, “But honestly, you really think this is bullying?”

“I think you have some talent but you’re making a massive mistake,” Brooks further warned. “You’ve heard this already. If you’re a fan, I’d hope my words would carry some weight. You’re better than this.” 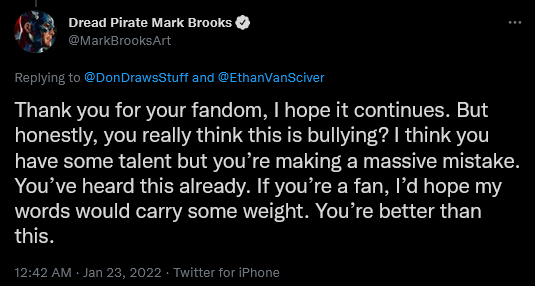 When asked by Edwards for clarification as to what he was “better than”, Brooks did not respond.

Later that day, Edwards claimed that he had been blocked by Brooks, but not before receiving an alleged DM from the industry artist further cautioning him against associating himself with Comicsgate.

“If you want to talk about this, let me know,” wrote Brooks. “I’m not looking to be your sponsor or support system, I’ll just tell you how it is. Raw truth. If you draw comics for a living, this is a super stupid move.”

The message continued, “Doesn’t matter if you want to work for the big 2 or do indy, CG is how you kill your long term career. 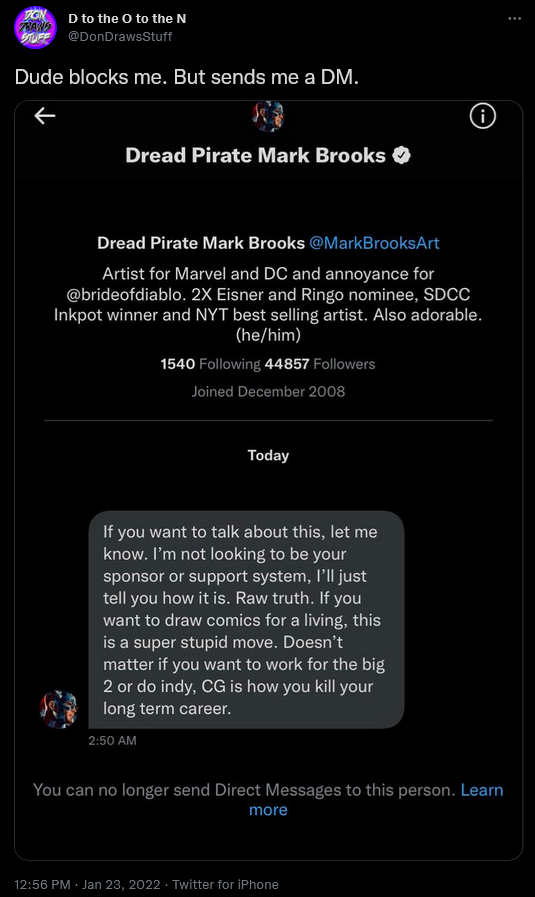 As Brooks’ interaction with Edwards gained widespread attention across social media, former Hawkman artist and prominent Comicsgate creator Jon Malin referenced the incident in a promotional tweet for the ongoing crowdfunding campaign for the fourth volume of his current Graveyard Shift series. 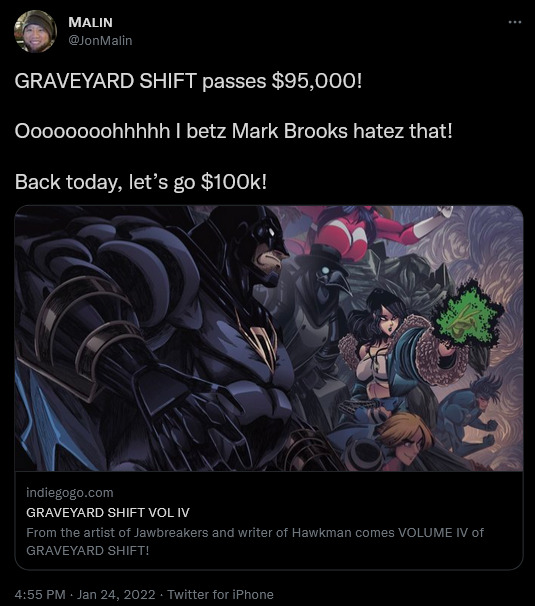 Taking Malin’s tweet as an opportunity to weigh in on the situation, user @robbery_highway opined, “Mark Brooks strikes me as a weaselly manipulator.”

Joining the conversation following the mention of his name, Brooks fired back, “Nope, that would be the guys you follow obsessively” sharing the Mark Twain attributed quote, “It’s easier to fool people than to convince them that they have been fooled.”

Ironically, despite social media users’ regular attribution of these words to the famed American author, there appears to be no evidence that he ever said this specific phrase. While he did express a similar sentiment in 1906, asserting “How easy it is to make people believe a lie, and how hard it is to undo that work again!”, the first utterance of the exact quote cited by Brooks appears to have been made and falsely attributed to Twain on Twitter in 2011. 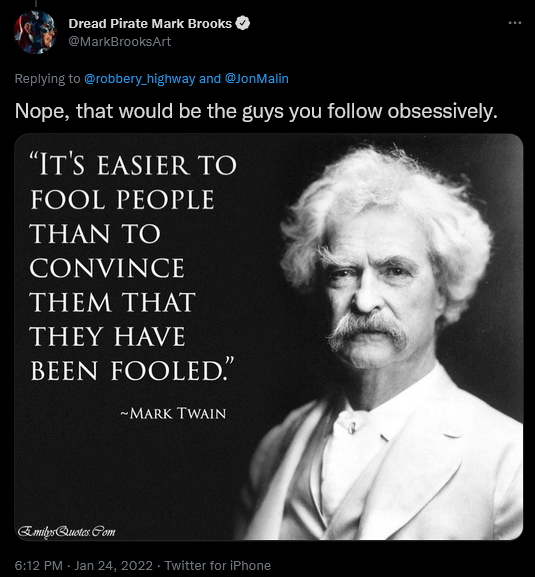 “Sir. I’m backing a product I like the look and sound of,” replied @robbery_highway. “Everyone saw your DM to that Dan fellow. What exactly were you willing to do for him? Put in a good word at Marvel? Let him know who to sidle up to? That’s very suspicious. Btw I love your art.”

Offering his appreciation for @robbery_highway’s enjoyment of his work, Brooks explained, “I was offering to actually help him improve his art and give him a bit of a roadmap into comics whether it be mainstream or indy.”

“And do it without having to attach himself to alt-right conmen,” he then accused. “You’re being conned. Pure honesty.”

Finding themselves confused, @robbery_highway proceeded to inquire as to “What is the con here exactly?”

“It’s not like I’m following them for ideological reasons and being weaponized into some kind of crusade. I don’t go out of my way to badger anyone in this industry,” he elaborated before once again asking, “What is the great sin these guys committed?”

“They launch harassment campaigns with nearly every video they make,” Brooks claimed. “Me most recently but there’s been dozens of others. They harness your anger to grift you out of your money. Not sure how much more plainly I can put it. You’re being used for the funds you supply.”

Though he did not continue to respond to these threads, Brooks later tweeted an ostensible summation of his thoughts on the above interactions, writing, “Ignoring alt-right hatemongers isn’t cool. Getting them so pissed off at you that they can’t stop talking, tweeting, thinking, and making shitty videos about you? Now that’s cool.”

Met by a fan who cautioned, “I agree but don’t stoop to their level, man. You’re just giving those losers more ammunition,” Brooks ultimately noted, “Agreed. But they’re so easily triggered.”

What do you make of Brooks’ interaction with Edwards? Let us know your thoughts on social media or in the comments down below!