ABC News President Kim Godwin announced that Whoopi Goldberg was suspended for two weeks following her comments about Jews and the Holocaust. 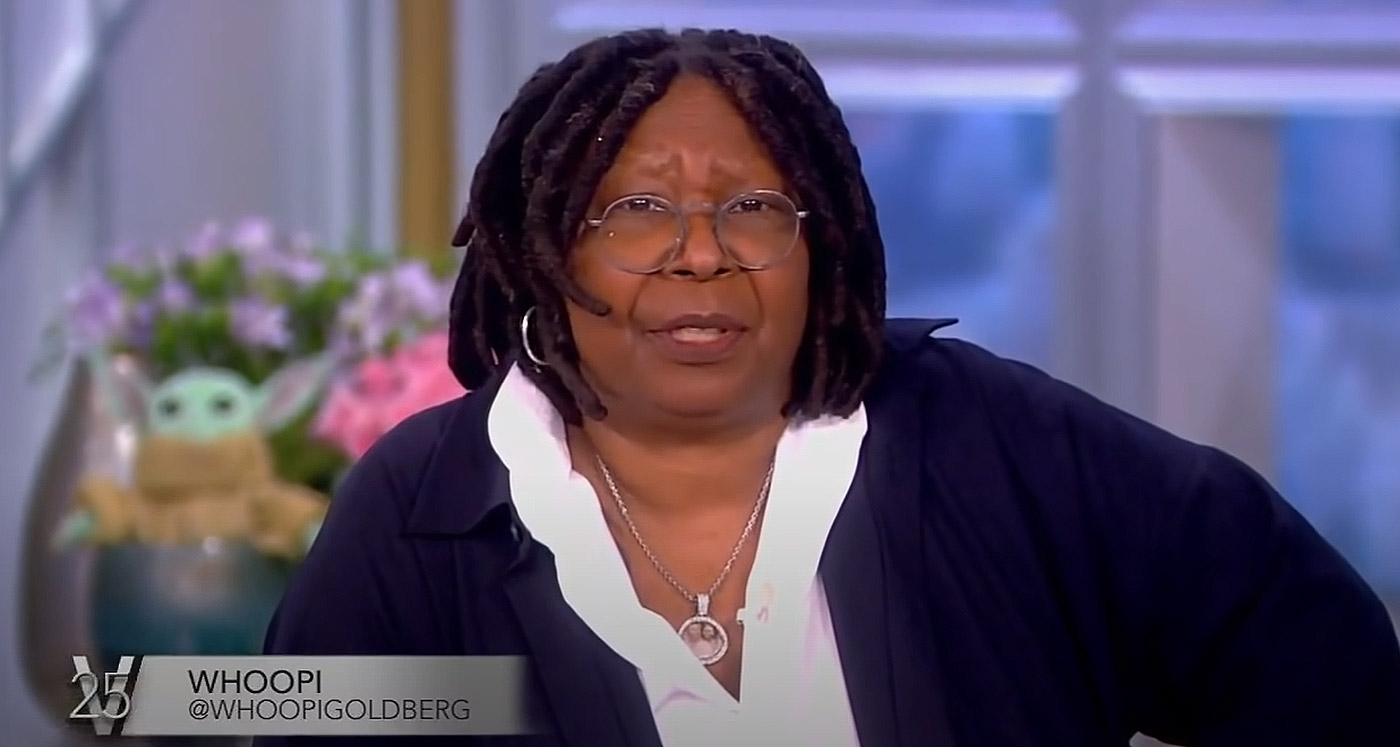 In a post to the ABC News PR Twitter account Godwin wrote, “Effective immediately, I am suspending Whoopi Goldberg for two weeks for her wrong and hurtful comments.”

“While Whoopi has apologized, I’ve asked her to take time to reflect and learn about the impact of her comments,” Godwin added.

She concluded, “The entire ABC News organization stands in solidarity with our Jewish colleagues, friends, family and communities.” 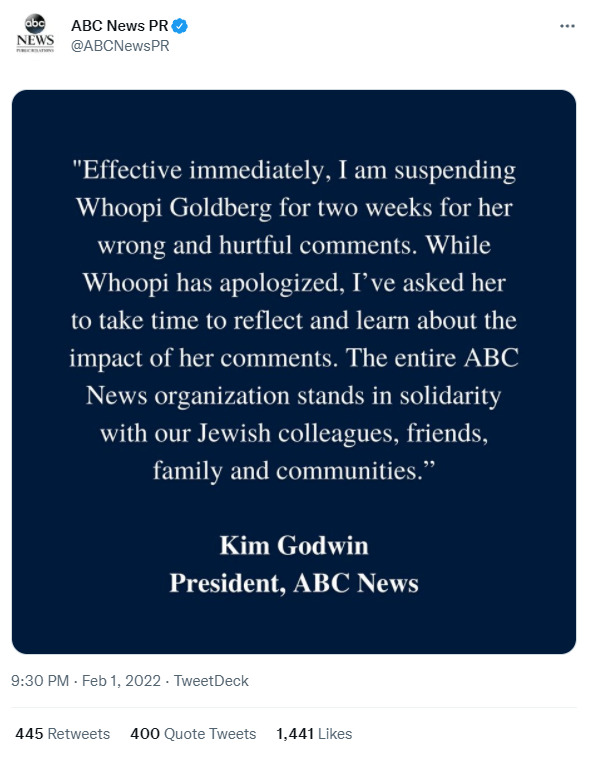 During a segment on The View discussing the removal of graphic novel Maus from a Tennessee’ school district’s curriculum, Goldberg stated, “If you are going to do this then let’s be truthful about it because the Holocaust isn’t about race. No, it’s not about race.”

When asked what she thinks the Holocaust is about, Goldberg answered, “It’s about man’s inhumanity to man. That’s what it is about.”

“Let’s talk about it for what it is. It’s how people treat each other. It’s a problem. It doesn’t matter if you are black or white. Because black, white, Jews, Italian, everybody eats each other,” she continued.

After Ana Navaro asserted, “It is necessary for kids to learn about the Holocaust,” Goldberg added, “To learn about man’s inhumanity to man however it exposes itself.”

Goldberg would issue an apology for her comments on Twitter.

She wrote, “On today’s show, I said the Holocaust ‘is not about race, but about man’s inhumanity to man.’ I should have said it is about both.”

“As Jonathan Greenblatt from the Anti-Defamation League shared, ‘The Holocaust was about the Nazi’s systematic annihilation of the Jewish people – who they deemed to be an inferior race.’ I stand corrected,” Goldberg stated.

She continued, “The Jewish people around the world have always had my support and that will never waiver. I’m sorry for the hurt caused.”

“Written with my sincerest apologies, Whoopi Goldberg, “she concluded. 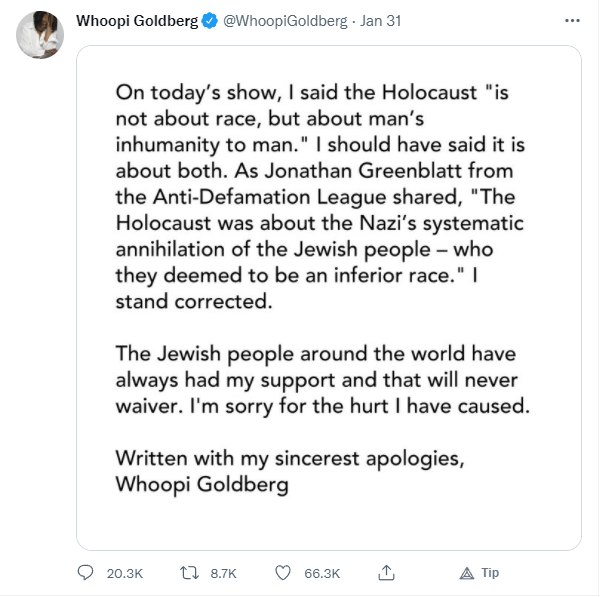 Following this apology, Goldberg appeared on The Late Show with Stephen Colbert to discuss her comments.

During the appearance, Goldberg stated that her comments “upset a lot of people, which was never ever ever ever my intention. I thought we were having a discussion.”

She elaborated, “Because I feel, being black, when we talk about race, it’s a very different thing to me. So I said I felt that the Holocaust wasn’t about race. And people got very, very angry and stil are angry. I’m getting, you know, all of the mail from folks, and very real anger because people feel very differently.”

“But I thought it was a salient discussion because, as a black person, I think of race as being something that I can see. So I see you and I know what race you are. And the discussion was about how I felt about that. I felt that it was really more about man’s inhumanity to man and how horrible people can be to people, and we’re seeing it manifest itself these days,” she added. 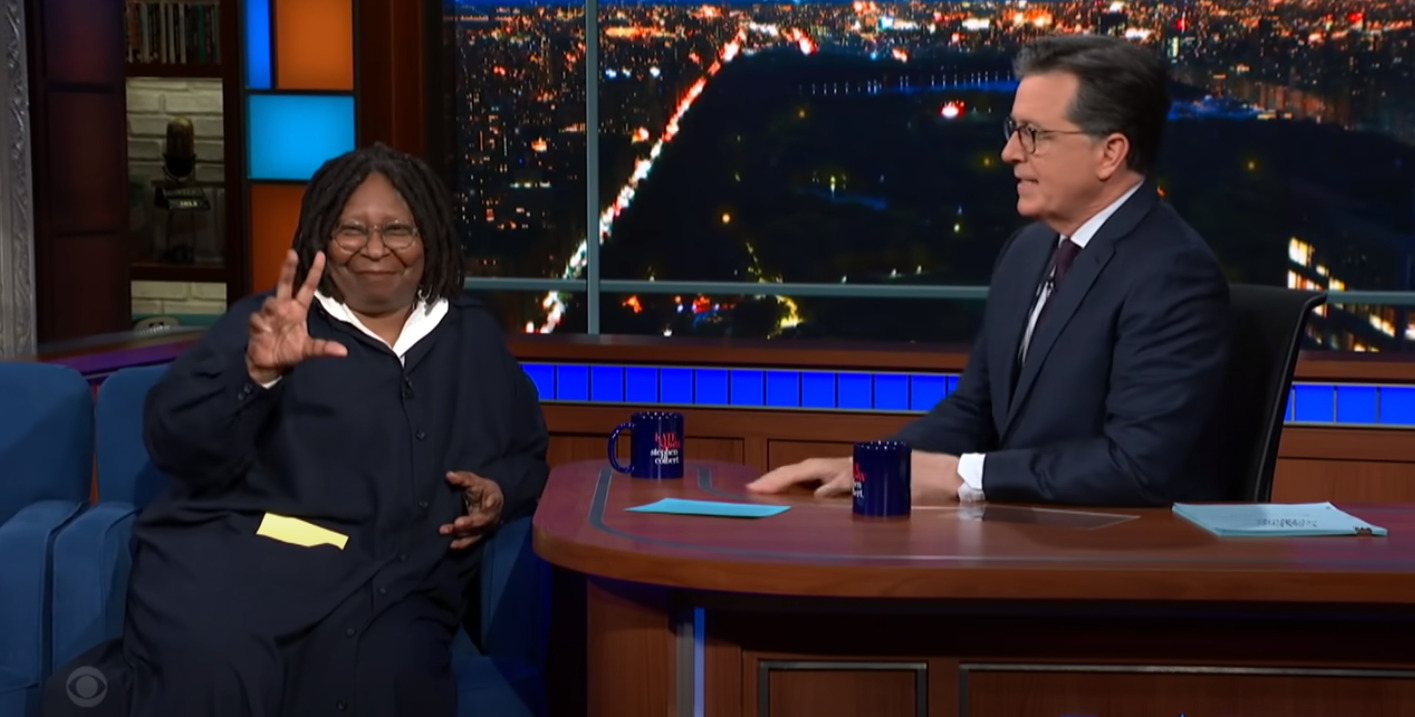 Goldberg went on, “But people were very angry and they said, ‘No, no we are a race.’ And I understand. I understand. I felt differently. I respect everything everyone is saying to me, and, you know, I don’t want to fake apologize.”

“I’m very upset that people misunderstood what I was saying. And, so, because of it, they’re saying I’m anti-Semitic, and that I’m denying the Holocaust and all these other thing, which, you know, would never occur to me to do. I thought we were having a discussion about race, which everyone I think is having,” she stated.

Colbert would then chime in claiming “whiteness is a construct created by colonial powers during the beginning of colonial imperialist era in order to exploit other people and that they could apply it to all different kinds of people. That idea of race. And the American experience tends to be based on skin.”

Goldberg responded, “Yes, and so that is what race means to me. When you talk about being a racist, I was saying, you can’t call this racism. This was evil. This wasn’t based on the skin. You couldn’t tell who was Jewish. They had to delve deeply to figure it out.” 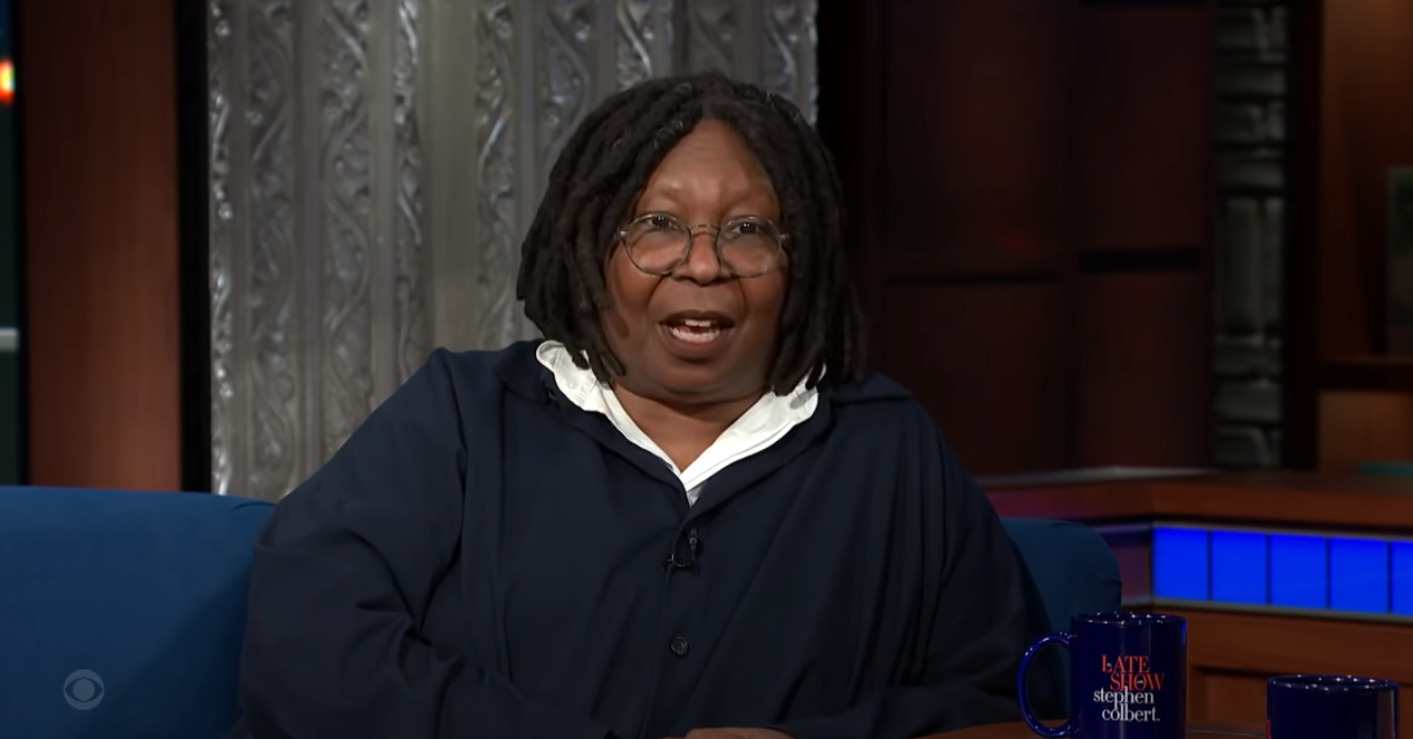 After Colbert talked about the Nazis identified Jews and made them wear a yellow star, Goldberg stated, “My point is, they had to do the work. If the Klan is coming down the street, and I’m standing with a Jewish friend and neither one — well, I’m going to run — but if my friend decides not to run, they’ll get passed by most times because you can’t tell who is Jewish.

She elaborated on that point, “It’s not something that people say, ‘Oh, that person is Jewish or this person is Jewish.’ And so that’s what I was trying to explain. And I understand that not everybody sees it that way. And that I did a lot of harm, I guess, to myself.

“And people, you know, decided I was all these other things. I’m actually not, and I’m incredibly torn up by being told these things about myself and I get it folks are angry. I accept that and I did it to myself. This was my thought process and I will work hard to not think that way again,” she asserted.

She went on, “So to me, I’m thinking how can you say it’s about race if you are fighting each other. It all really began because I said how will we explain to children what happened in Nazi Germany? I said this wasn’t racial, this was about white on white. And everybody said, ‘No, no, no. It was racial.’ And, so, that’s what this all came from.”

“So, once again, don’t write me anymore. I know how you feel. I already know. I get it. And I’m going to take your word for it and never bring it up again,” she concluded. 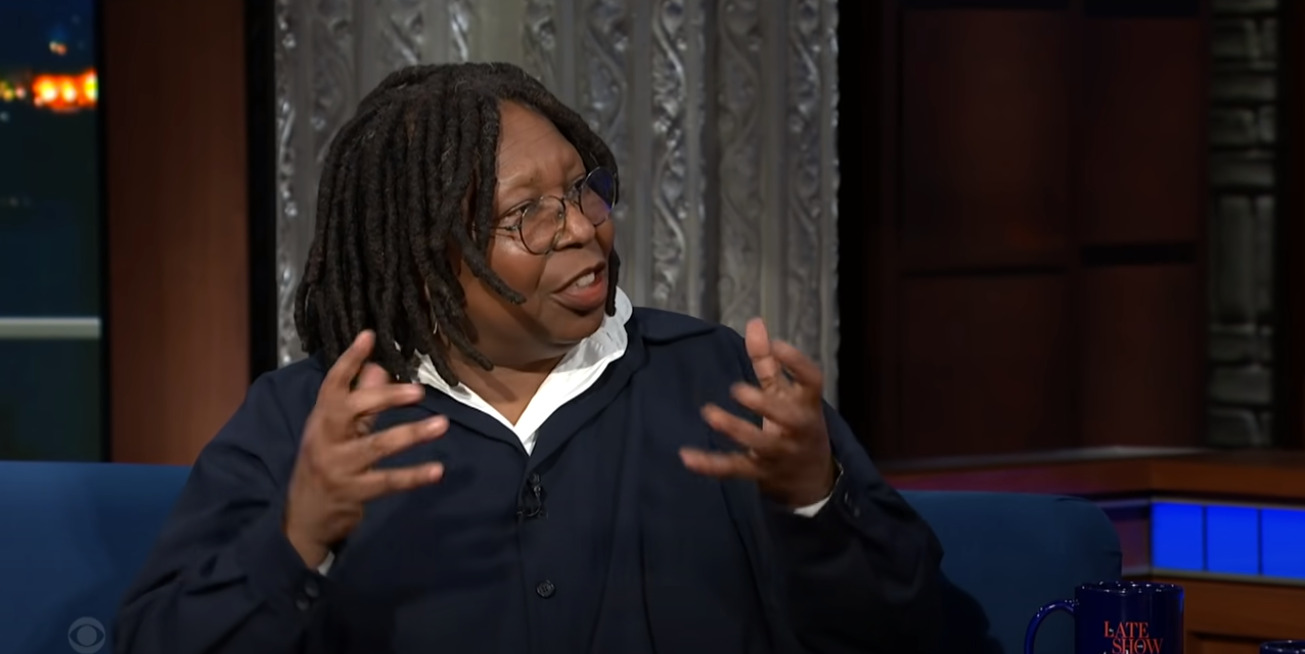 What do you make of Whoopi Goldberg getting suspended from The View for two weeks?

NEXT: Why Whoopi Goldberg Should Be Fired For Her Anti-Semitism