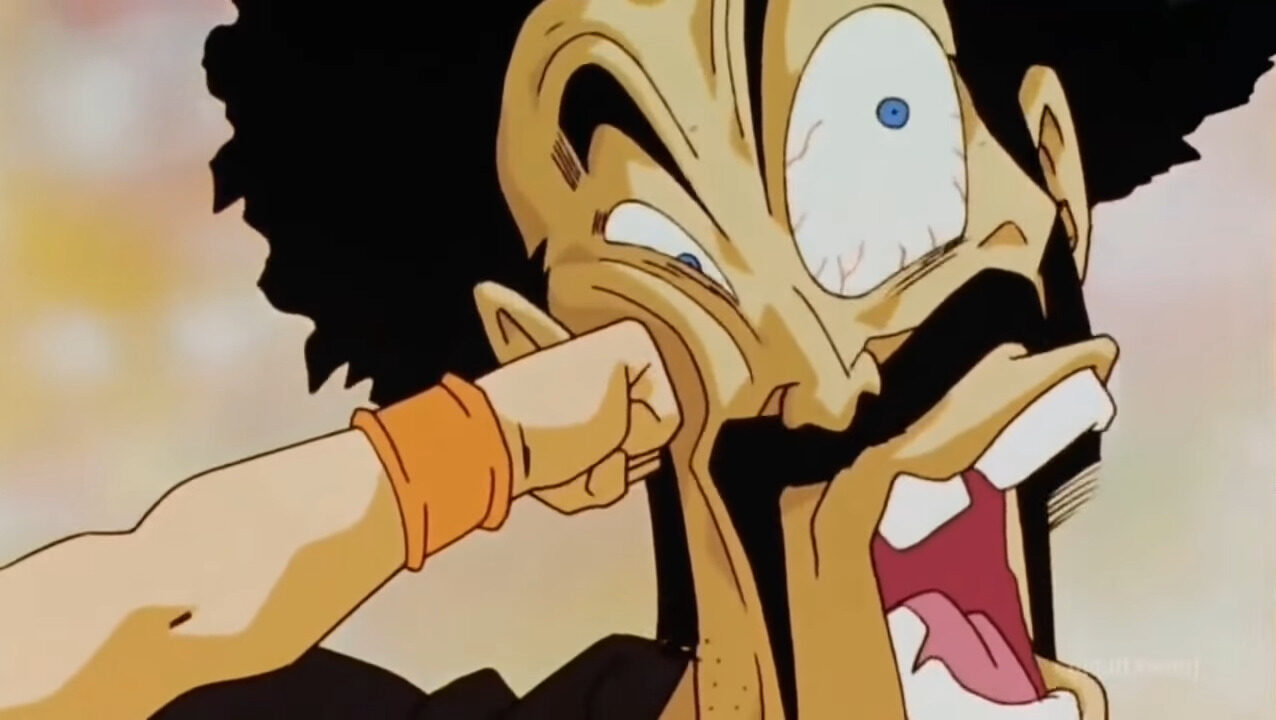 Self-described as their attempt at “setting the record straight,” Rial and Marchi’s In Touch podcast will see the two recount the story of Vic Mignogna’s firing over accusations of sexual misconduct from their perspective as his principal accusers.

“TLDR: We won. They lost. They can’t get over it,” Rial and Marchi explain on the show’s official website. “Now, it’s our turn to tell our side of the story.” 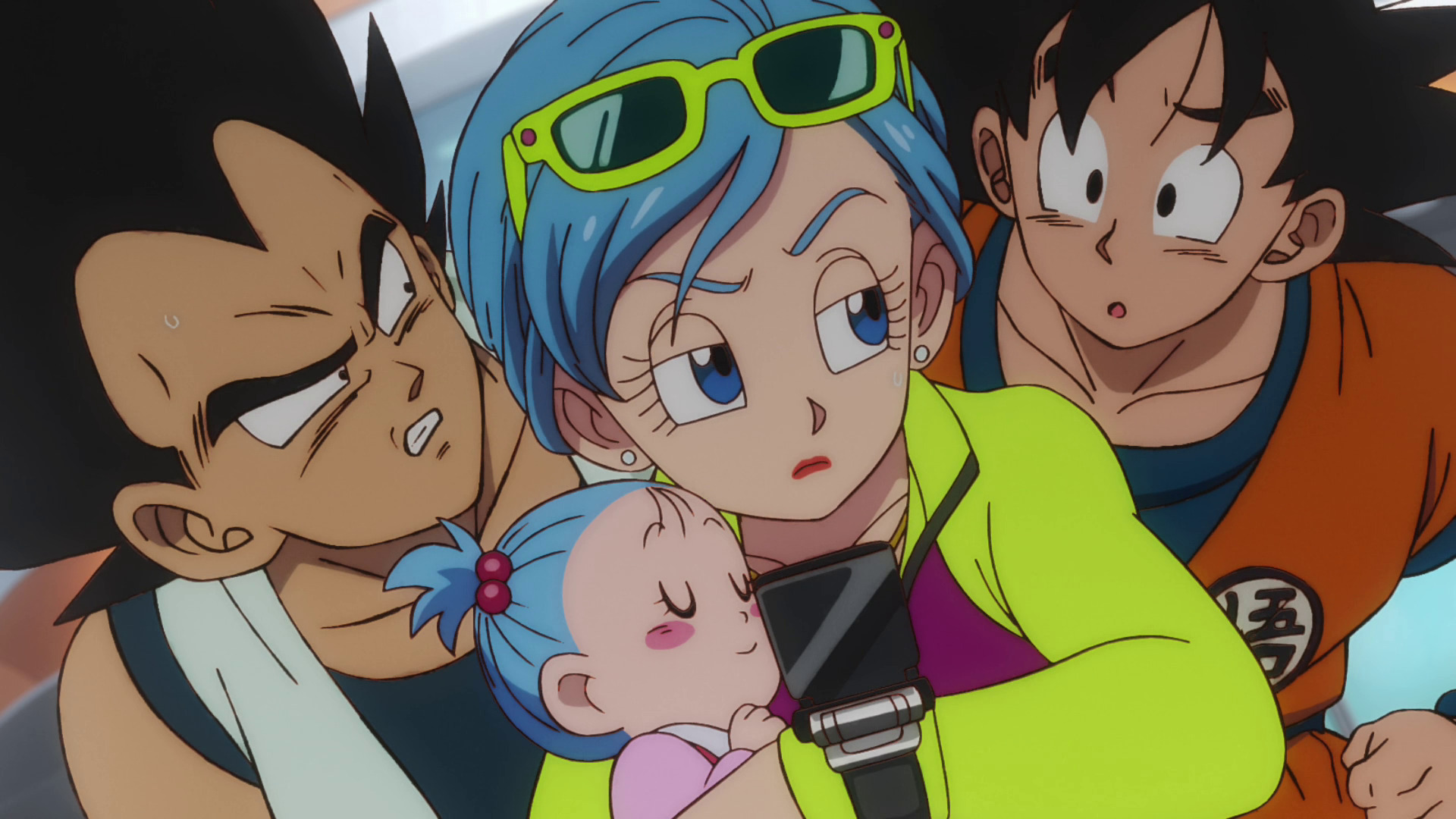 As word of the podcast’s then-upcoming premiere began to circulate across social media, Dark criticized its announcement, tweeting on February 7th, “Nothing says ‘I went through the most traumatic experience of my life’ more than launching a podcast to capitalize on those clicks.” 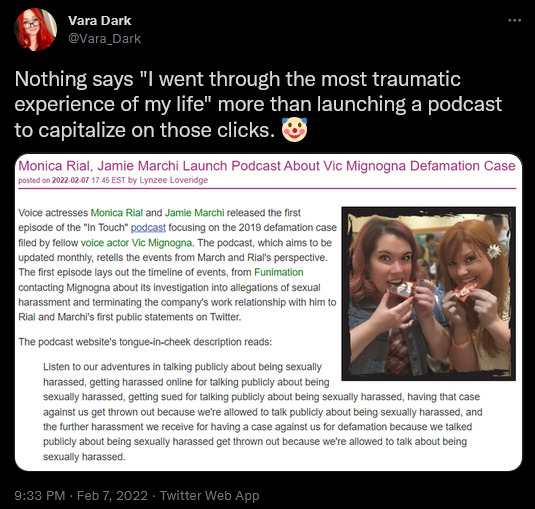 “While they’re making A WHOLE PODCAST about the situation, @vicmignogna ever rarely talks about it and just wants to move forward,” she continued. “Shows a massive difference in character here.”

Giving the show’s debut a listen after it went public on January 8th, Dark found herself taken aback with its actual contents, noting that the episode felt like “a laugh fest, like friends were talking about their favorite hobby enjoying their time together.”

“Comes across like a massive joke, when they’re supposed to be talking about an extremely serious situation,” she said. 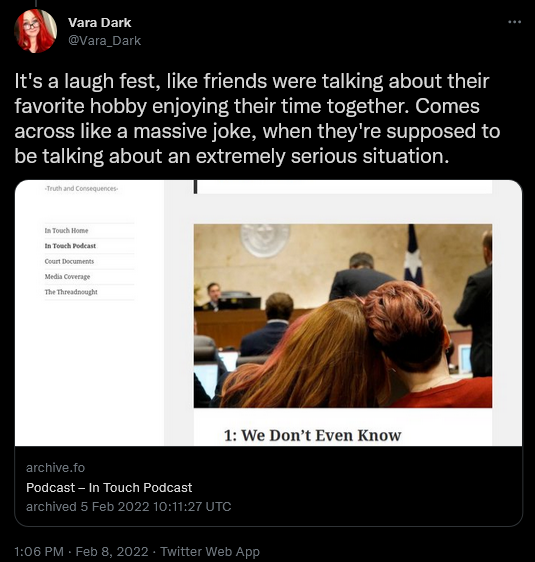 Met with slight pushback from @PushinUpRoses, who informed Dark that “Sometimes we deal with trauma by putting it out there, so it can live somewhere other than festering within I’d encourage that kind of expression versus becoming mired in your experience,” the YouTuber clarified her opinion on and elaborated on why she took specific issue with the episode.

“As I said in my video on the topic and in this thread, people do voice their traumatic experiences online and I think that is perfectly fine,” she elaborated. “But in the first podcast episode they’re laughing like it’s a big joke and it’s extremely unprofessional.” 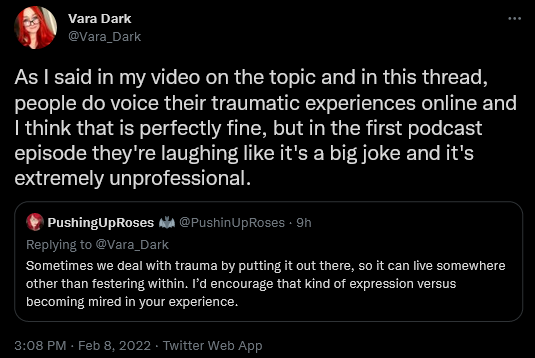 She added, “They weren’t treating it like they were voicing this awful trauma they went through for others to listen to and raise awareness. People laughing about a traumatic experience comes across terribly.”

Several hours later, Dark’s initial tweet would be discovered by Rager, who then proceeded to respond to her opinion with unabashed and unwarranted vitriol.

“The most traumatic thing in my life is you’re [sic] hair,” the voice actor insulted Dark. “And you’re [sic] overall c–tiness.” 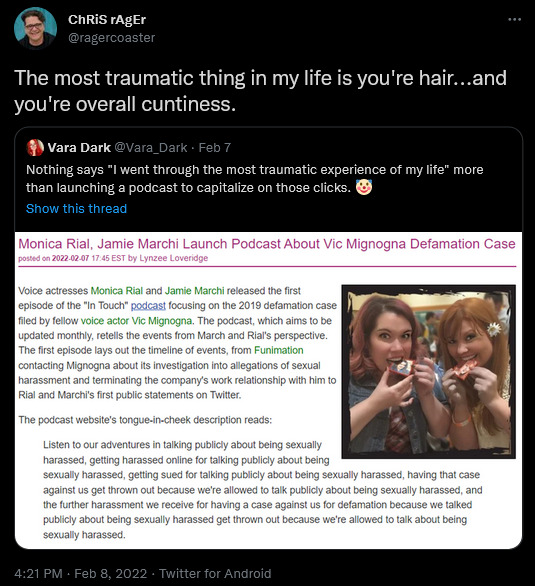 Of course, unsurprisingly to anyone who has watched even one of her videos, Dark refused to roll over, firing back, “First of all *your. Second, all I did was voice how I didn’t think it came off as genuine that they launched a podcast marketed as them talking about their trauma yet laughed all the way through it.”

“I didn’t resort to insulting peoples looks or namecalling,” she further observed. 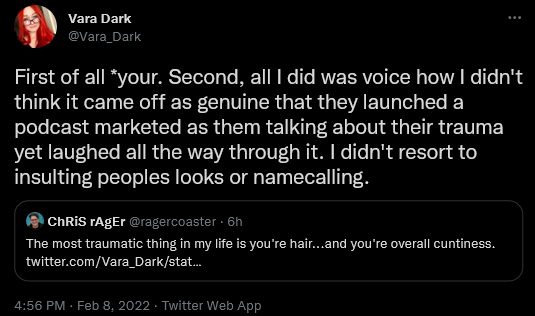 Rager then turned his attention from Dark towards random Twitter users, engaging in insult battles with a number of those who responded rudely to his interactions with the YouTuber or met his aggressive attitude with their own.

“Quite frankly, Vic was thrown under the bus while those b—s got off Scot free. To be fair, I did hate Monica before for ruining Bulma,” wrote @RobertSKolterja, to which Rager suggested, “Have you tried f—ing off? I think you’d like it,” kicking off a lengthy thread of similar exchanges between the two.

Presented with an edited page from Valve’s series of Team Fortress 2 comics which read “This s–t is why everyone hates you,” the voice actor pushed back, “Psst…no one knows who’s are.” 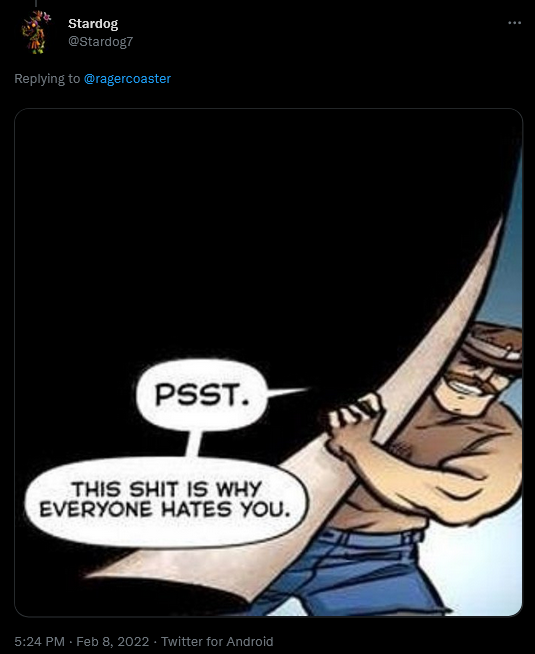 “You have no right talking trash when such a shnoze is planted in the middle of your face,” countered @_K4L_, following Rager’s lead on attacking appearances.

“It’s almost like I’m confident with my features and you have an anime picture…so,” he said in response.

What do you make of Rager’s response to Dark’s criticisms? Let us know your thoughts on social media or in the comments down below!