It has been confirmed that Master Chief will reveal his face in Paramount Plus’ live-action Halo TV series. 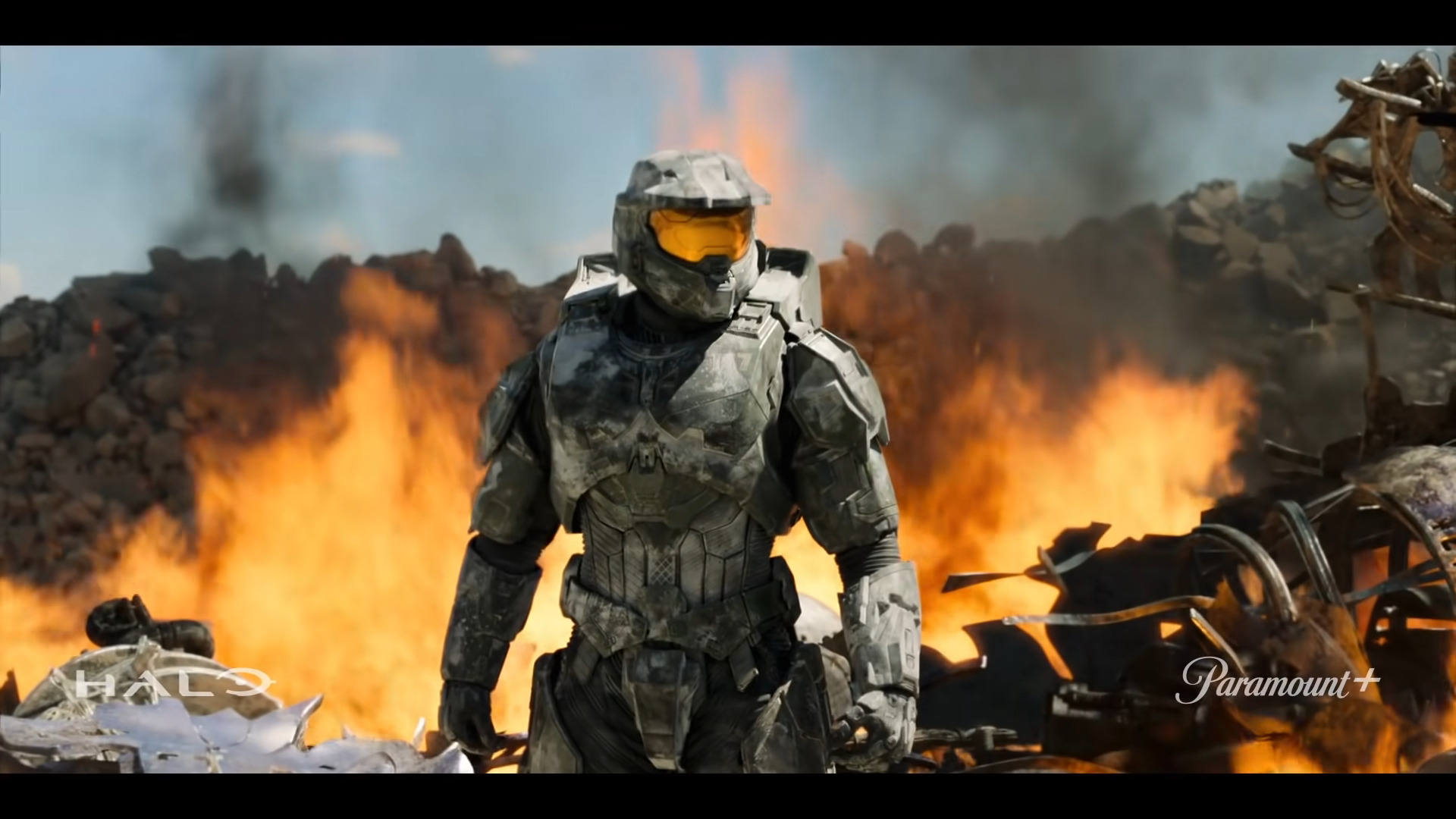 Speaking to IGN, Halo Executive Producer and 343 Industries’ Studio Head of Transmedia Kiki Wolfkill explained that showing what John-117 looked like under his helmet was important for the story that will be told.

“I think we set out to tell a character story and a personal story,” Wolfkill stated. “And once we really got into what that story was, it became clear that you really needed to see the person in the armour and under the helmet.” 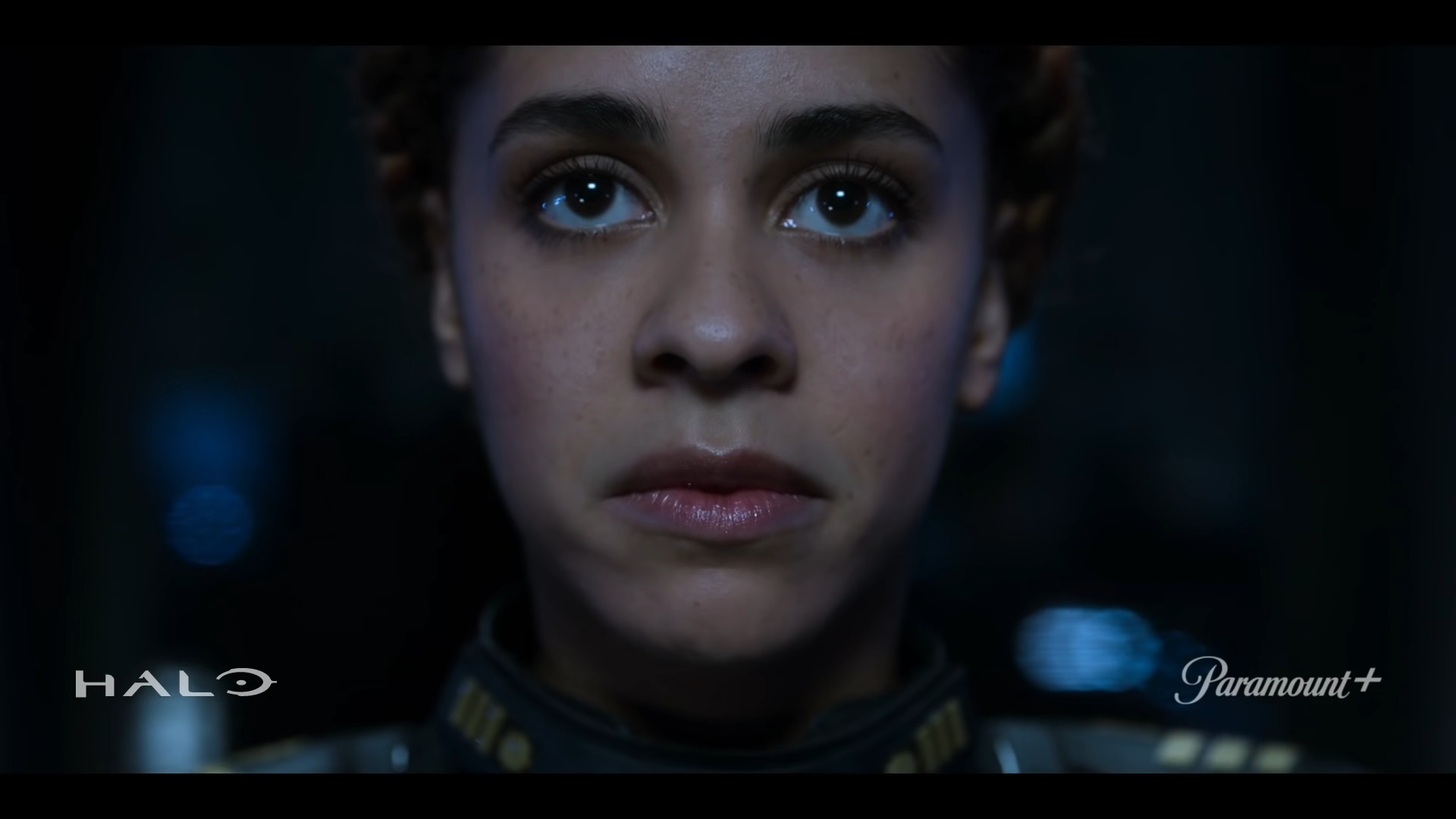 She then revealed that fans “will see his face” at some point in the series, noting that, “For some people, it’s been a moment 20 years in the making, and for other people it is something that feels very hard to imagine.”

“We absolutely respect both sides of that fence, those who really want to see Chief’s face and those who really don’t,” Wolfkill explained. “But for the nature of this story, it felt really important to connect with the Master Chief in a different way, and that meant showing the face.” 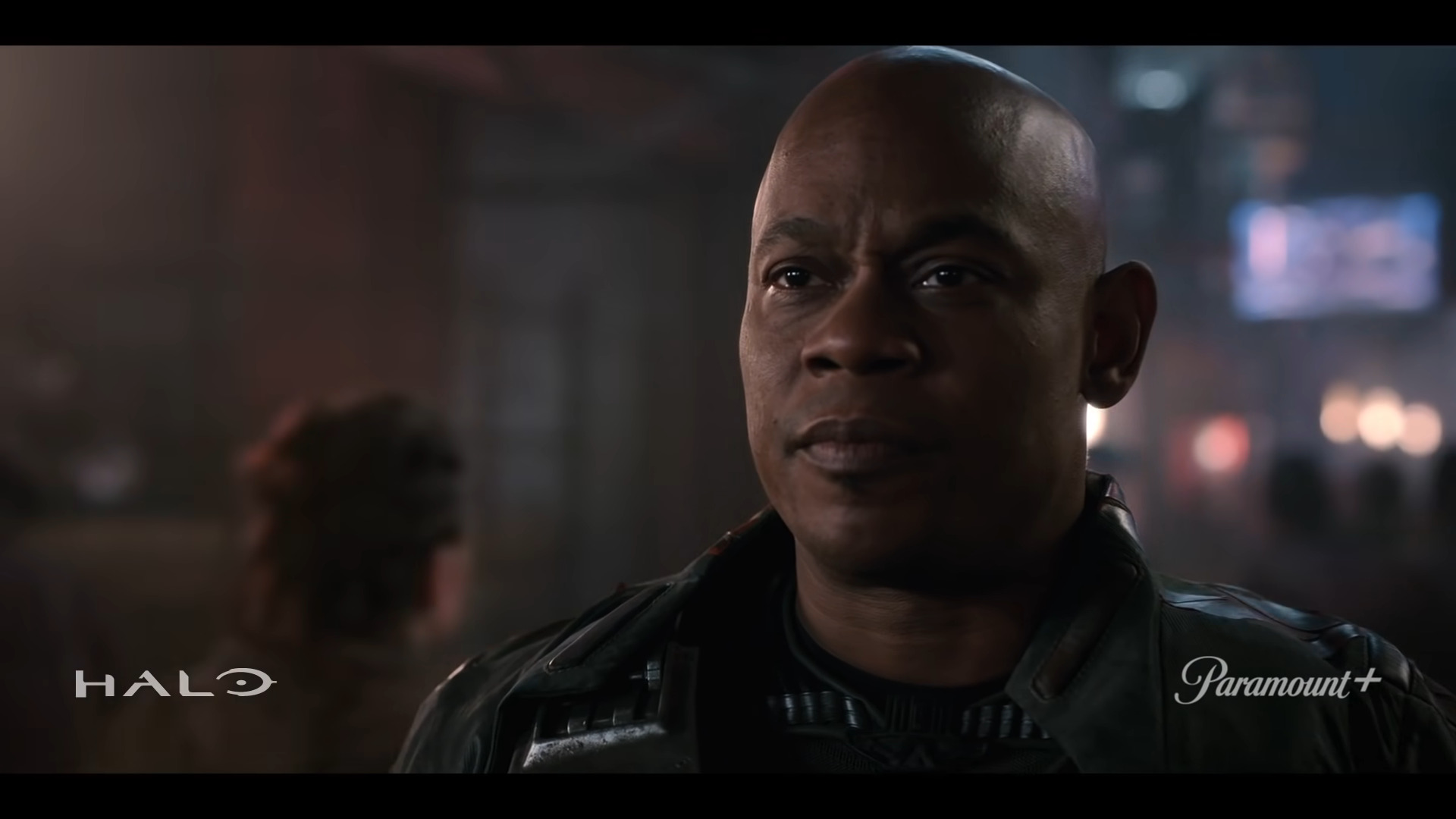 Ignoring the fact Pablo Schreiber will be playing Master Chief and we already know what the actor himself looks like, the Master Chief character has never officially had his face fully revealed in the Halo games.

However, that is not say that fans have never gotten a glimpse under the Spartan’s hood.

The ending to the first Halo game saw Master Chief taking off his helmet, though the camera’s shot of his face was ultimately obscured by the frame of his Longsword fighter.

Fans hacking later revealed that under his helmet was another helmet – or rather, Chief’s model had simply duplicated its helmet and never actually removed it. 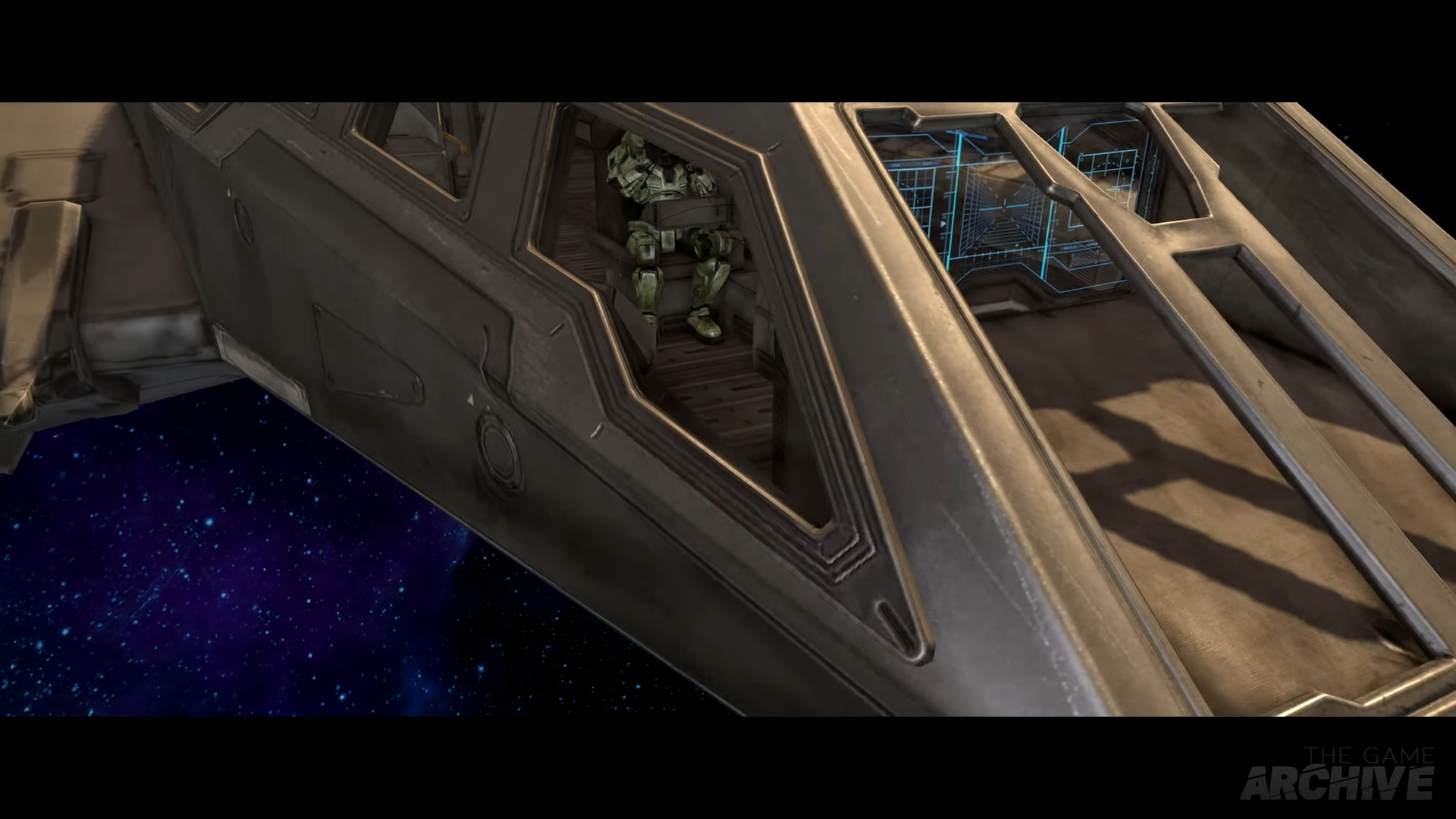 Halo 3’s beta had a face behind the mask, as did other Spartans. While this face was claimed to have been a photoshopped version of Bungie Creative Director, Studio Director, 3D Artist, and Environment Artist Marcus Lehto’s, Lehto himself later revealed that this may have actually been 3D Artist Eric Arroyo. 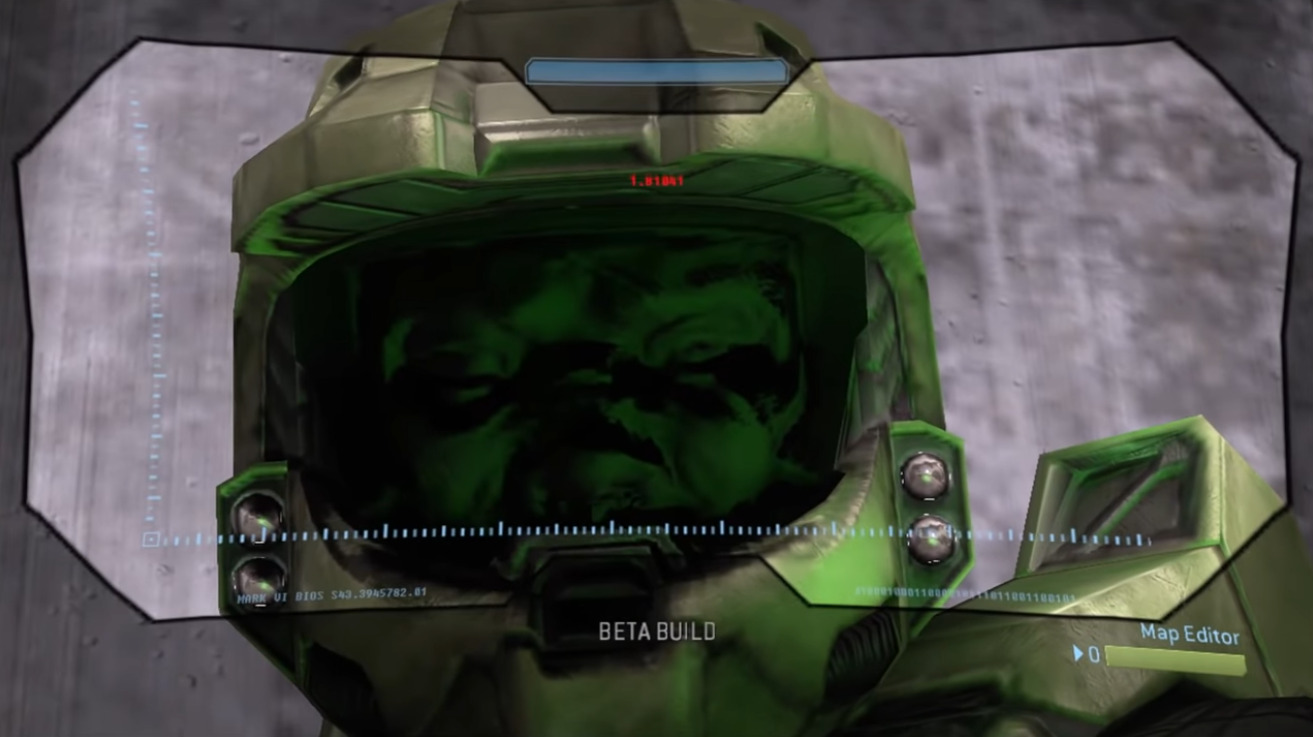 Finally, Halo 4 featured a flashback montage of a young Master Chief undergoing his Spartan training, while the game’s secret Legendary ending revealed that he had a seemingly Caucasian face with a scar under the left eye. 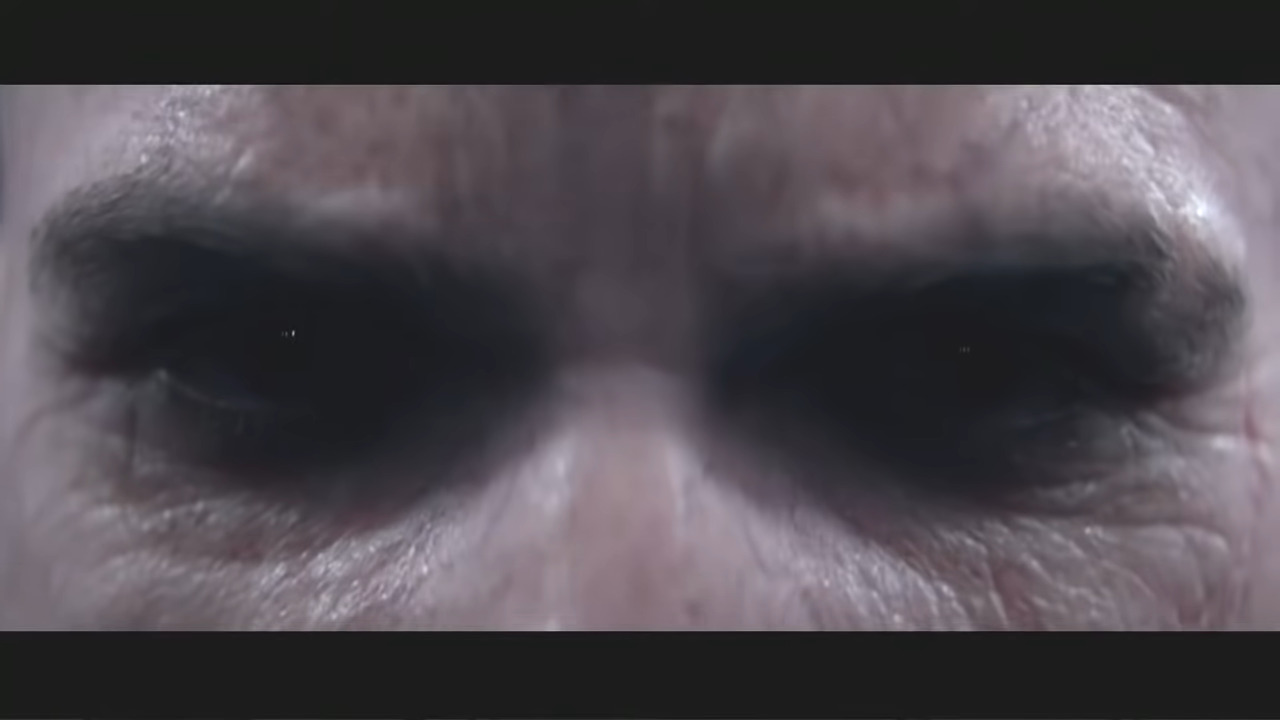 A young helmetless Chief can also be seen in both Halo 5: Guardians and the animated short film Halo: Fall of Reach.

Likewise, the trailer for the Halo TV series shows the back of a white male – potentially either Chief or another Spartan – bearing a shaven head.

Fan reactions to the news, particularly in response to Video Game Awards producer and host Geoff Keighley’s discussion of Chief’s unmasking, were less than positive.

“Could have kept the helmet on the whole time and let Steve Downes do the voice,” @velaskgoodbye lamented. “But here we are I guess.” 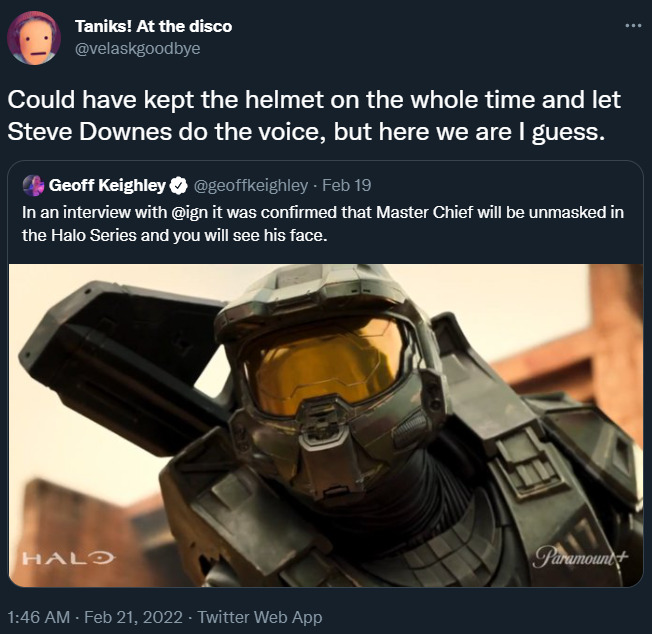 “This seems like a really bad idea,” @SortofSalient tweeted. “At this point, any design you do is likely to be hated by most people because it doesn’t fit with their imagined idea of what he looks like.” 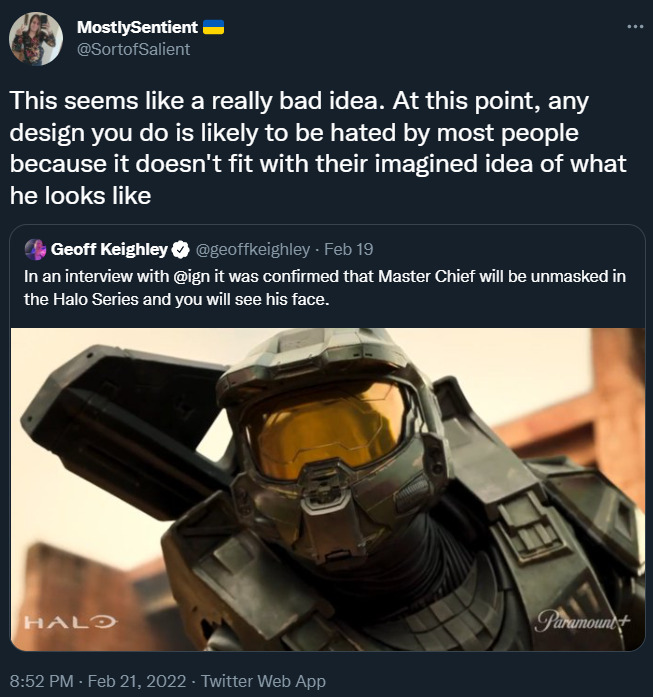 “I get that many actors kind of rely on their face for their profession, but a good team of directors/actors working together can still pull off the visage of an incredibly compelling character without ever showing their face,” @azurill_but_sad argued. “V in V for Vendetta is the peak example.” 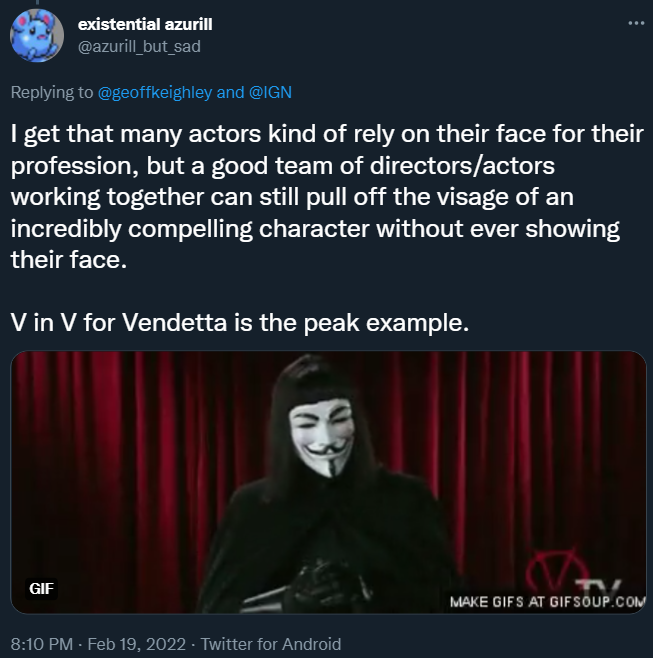 “This would be like making a lord of the rings show and then changing literally every aspect of Tolkiens writing for no reason,” wrote @Bolverk15, adding “oh wait” in reference to the litany of lore-breaking changes the Amazon show is set to make.

Not everyone was against the idea however, as @the_jemster reasoned, “We’ve already seen Chief’s face a dozen times but this will piss of the Gamers™ so I’m down.” 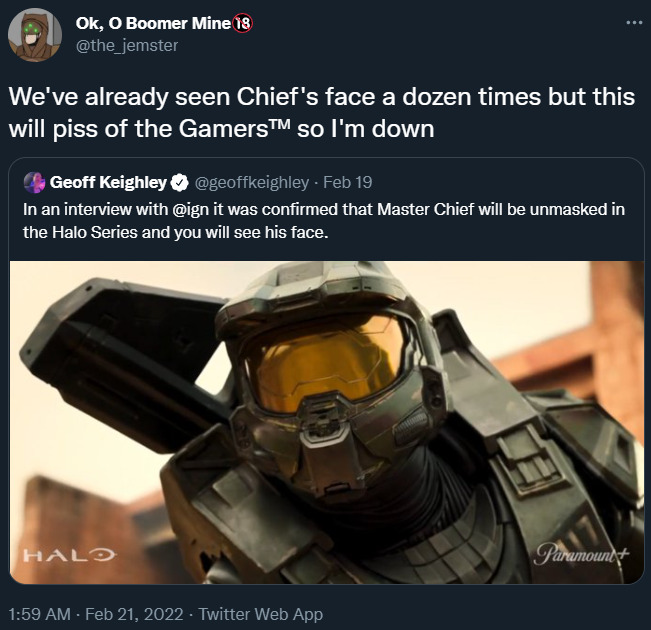 Nonetheless, fans have already expressed concern over one confirmed change already made to the series, finding themselves questioning the live-action Cortana’s more human and realistic appearance compared to her original blue incarnation.

This displeasure with Cortana’s new look soon led fans to make their own edits of her appearance, many of which were better received than the official version. 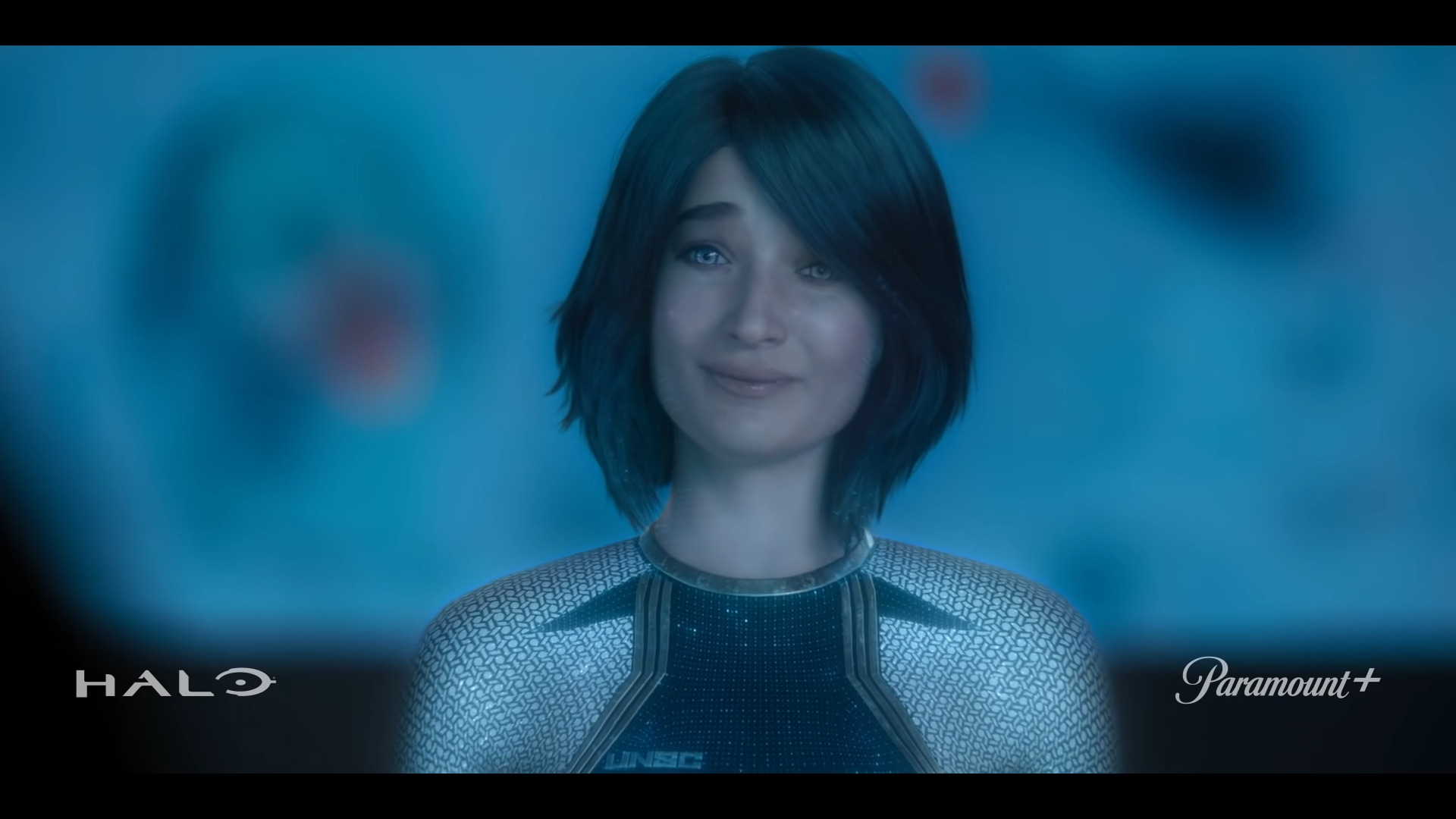 It should be noted that both Halo and Sonic the Hedgehog, whose original depiction of the SEGA mascot was so heavily lamblasted that it was eventually changed to be more in line with the games, were produced by Paramount.

Following these changes, and arguably because of them, Sonic the Hedgehog went on to be a smash hit, with a third film and TV series recently announced as on the way.

As such, one wonders if listening to fan feedback on both Master Chief and Cortana’s live-action debuts may yield similar results.

Should Master Chief remain more a figure than a man? Is this yet another example of a live-action adaptation looking to dethrone a hero? Let us know your thoughts on social media and in the comments below.

NEXT: EA Exec Admits Battlefield 2042 Hurt By Surprise Launch Of Halo Infinite Multiplayer: “It Was Very Polished, And It Was Not A Favorable Comparison”