GOG, Microsoft, and Bloober Team have announced they are suspending sales of their products in Russia, over the invasion of Ukraine. 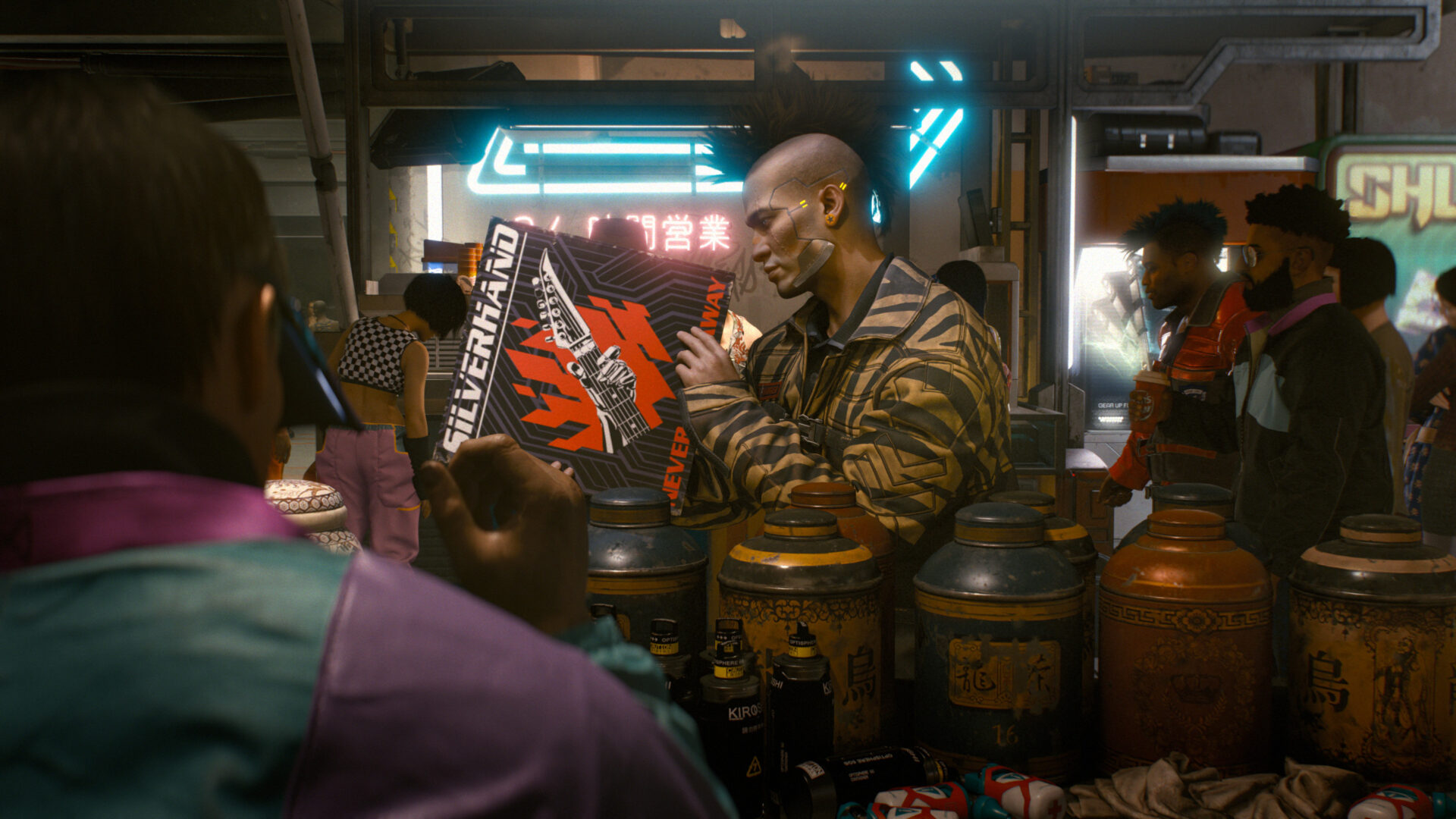 Initially CD Projekt Red- owned by CD Projekt, as GOG is- released their condemnation of Russia along with others in the Western gaming industry. “The recent invasion on Ukraine, our friends and neighbours, left us shocked and outraged,” CD Projekt Red tweeted.

“In solidarity with all victims of this act of aggression,” the tweet continues, the CD PROJEKT Group has decided to support humanitarian aid efforts by donating 1 million PLN [$223,898] to the @PAH_org [Polska Akcja Humanitarna].” 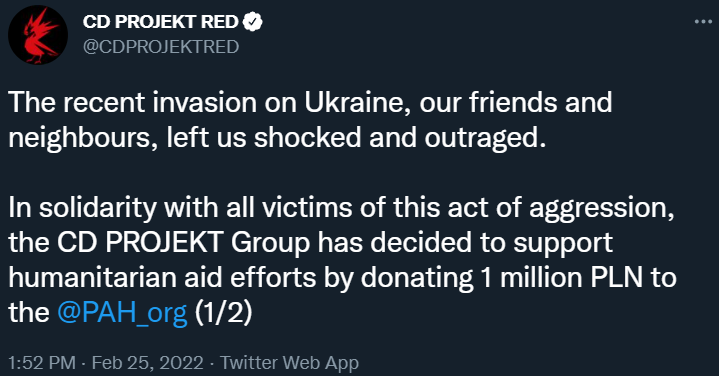 “We cannot remain indifferent in the face of such injustice and we ask everybody to join in and help in any way you can,” CD Projekt Red implored. “Together we can make a huge difference!”

However, it seems the Polish-based CD Projekt felt they could do more themselves. Six days later, GOG — Good Old Games — announced drastic action against the gamers of Russia and Belarus.

“In light of the Russian military invasion in our neighboring country of Ukraine,” GOG explained. “Until further notice the CD PROJEKT Group has made the decision to halt all sales of our games to Russia and Belarus.” 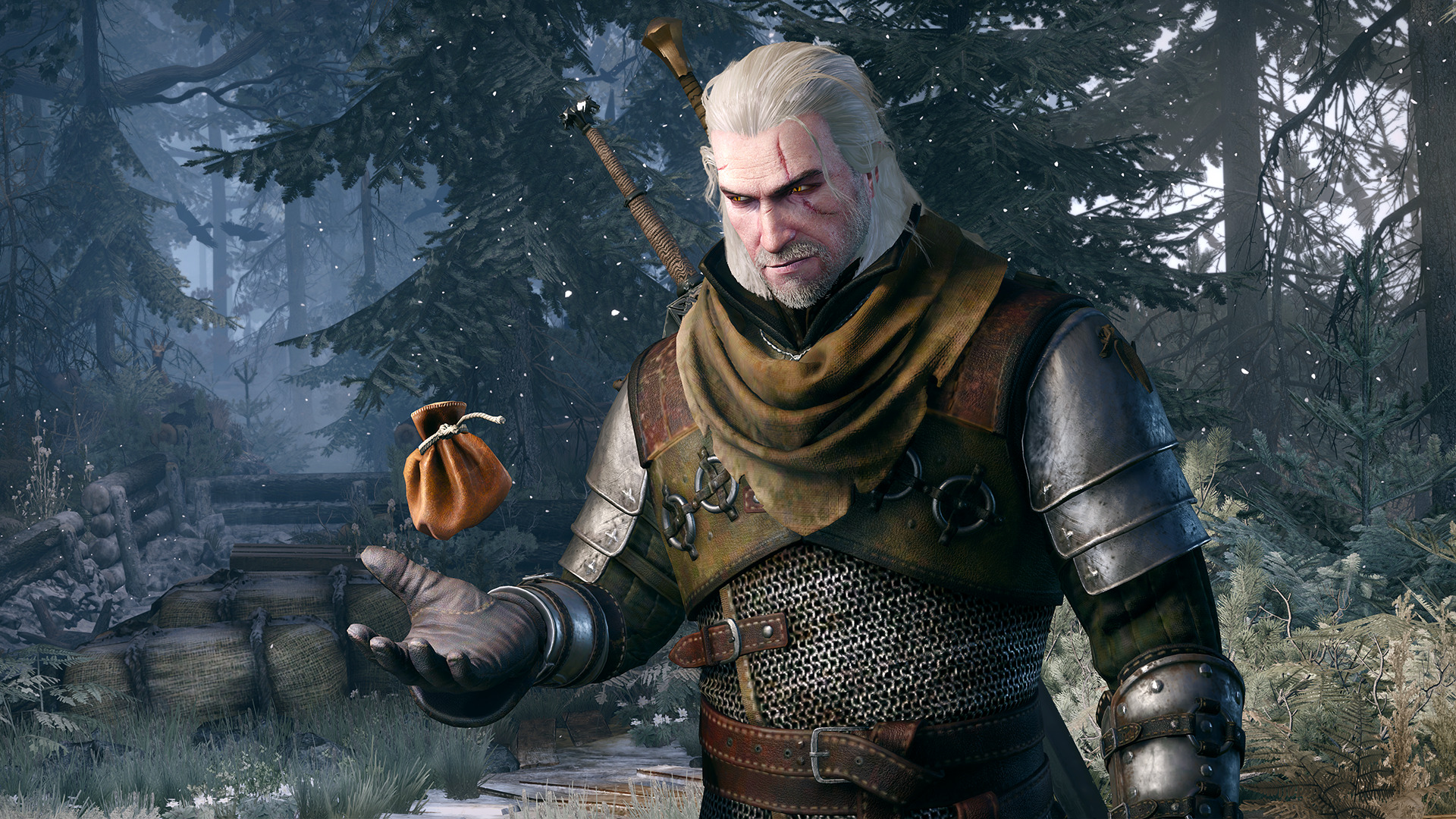 “Today, we begin working with our partners to suspend digital sales and cease physical stock deliveries of CD PROJEKT Group products,” GOG stated, “as well as all games distributed on the GOG platform, to the territories of Russia and Belarus.”

“The entire CD PROJEKT Group stands firm with the people of Ukraine. While we are not a political entity capable of directly influencing state matters, and don’t aspire to be one,” GOG reassured, “we do believe that commercial entities, when united, have the power to inspire global change in the hearts and minds of ordinary people.” 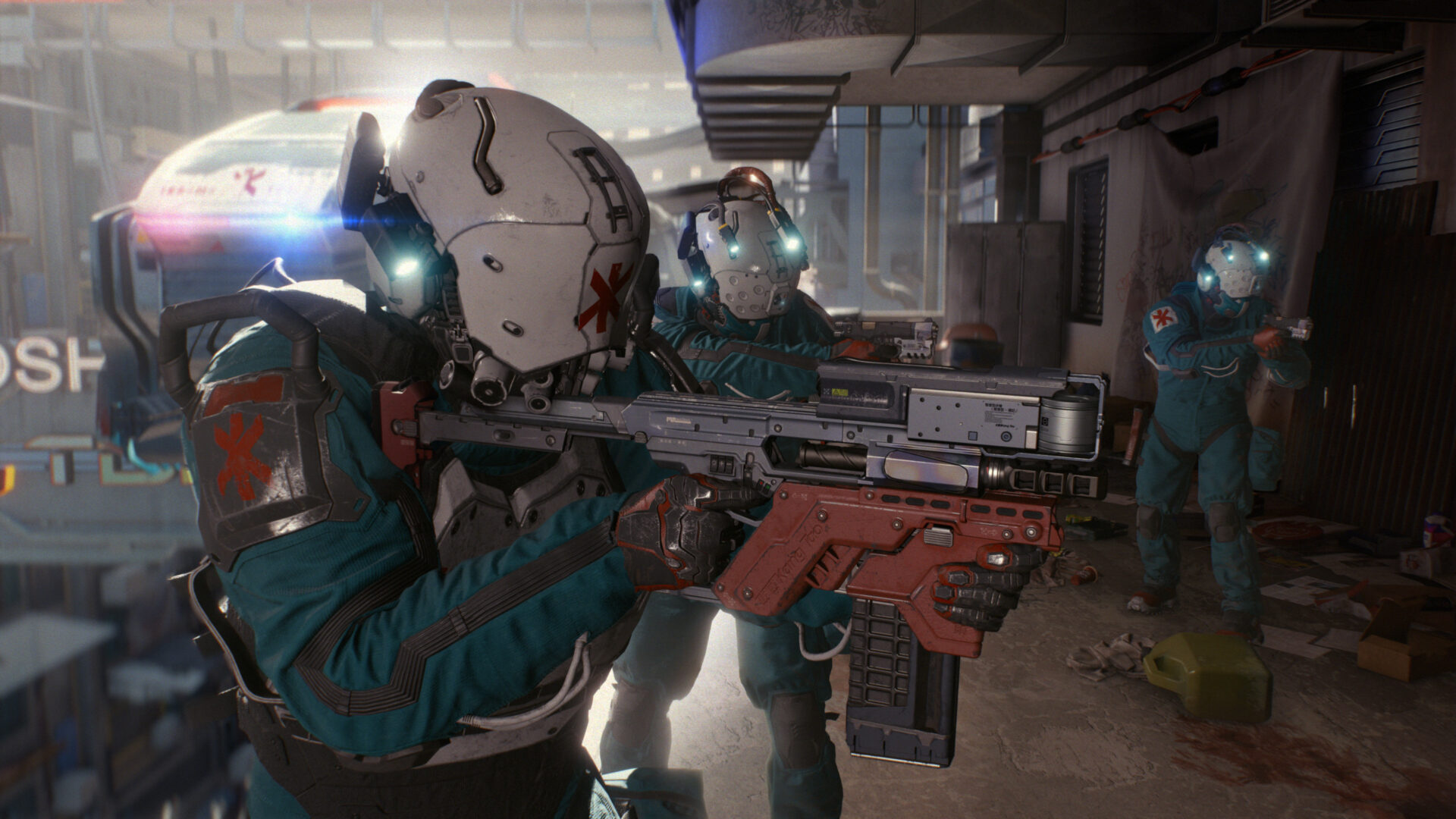 “We know that players in Russia and Belarus, individuals who have nothing to do with the invasion of Ukraine, will be impacted by this decision,” GOG admitted, “but with this action we wish to further galvanize the global community to speak about what is going on in the heart of Europe.”

“To our brothers and sisters fighting for their home country stay strong!” GOG concluded, adding “Слава Украіні!” which translates to Glory to Ukraine. 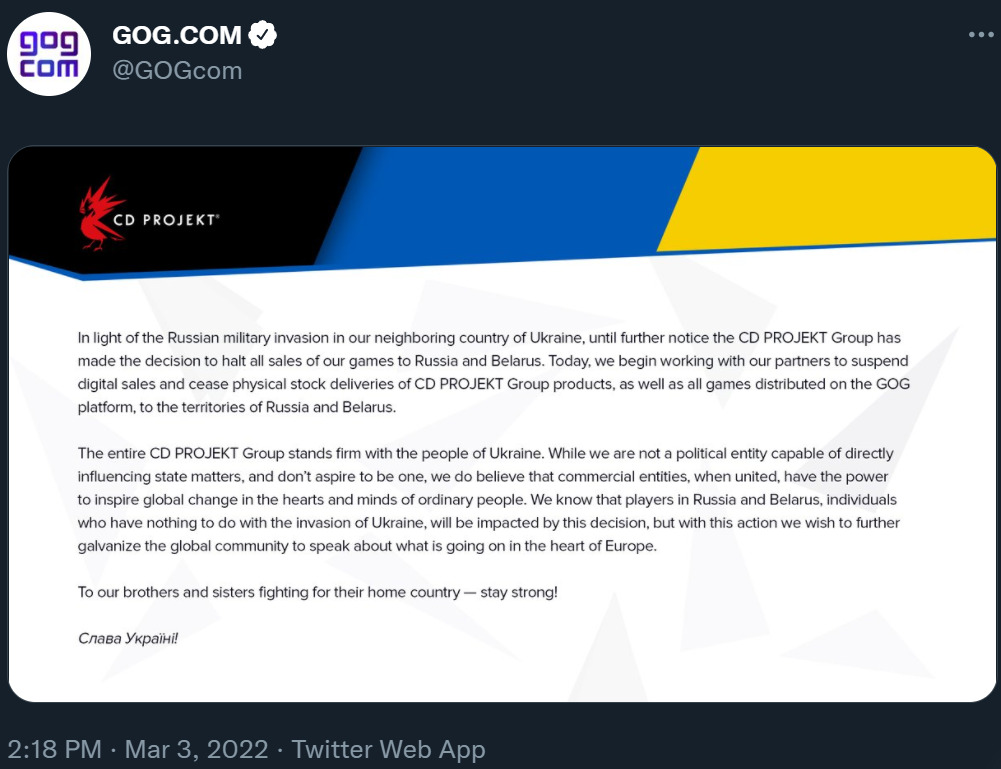 It seemed not everyone was happy with the decision however, and condemned it as mere virtue signaling. “Disney shot a movie next to an active concentration camp in China. They thanked China for it,” KenobiStig told GOG in the tweet’s replies.

“Now take actions against China and Disney, please,” KenobiStig insisted. “We want a consistent virtue-signal going. Otherwise it would just be hypocritical.”

GOG had previously backed out of selling indie-horror game Devotion, which had previously been pulled from sale over an Easter Egg allegedly mocking Chinese President Xi Jiping. 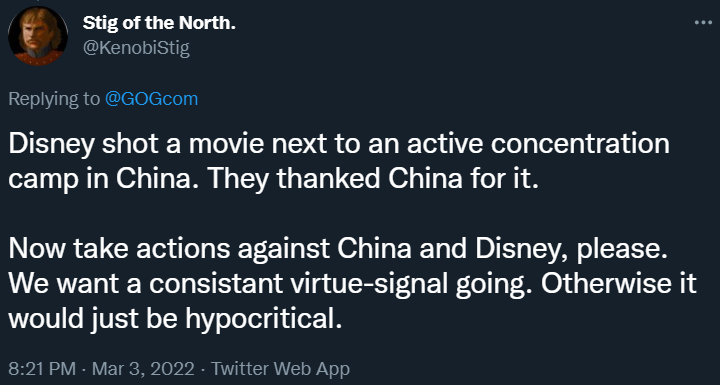 “Nah, this ain’t it,” RetroActiveGM replied. “You’re punishing Russian and Belarusian gamers for something which, by your own admission, has absolutely nothing to do with them.”

“If you really want to make a difference,” RetroActiveGM proposed, “you could donate your profits from Russia and Belarus to Ukrainian social causes.” 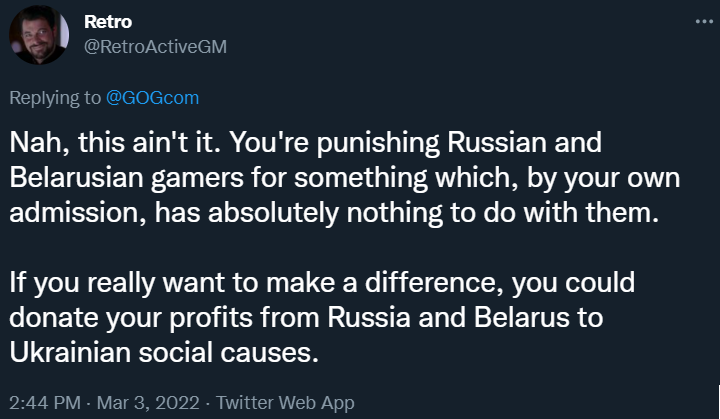 “I hope your country never goes to war,” Pettan_Enjoyer stated to their followers, “because its quickly looking like if you happen to live in the ‘wrong’ side of the war virtually all your online services will be revoked, because of a war you have LITERALLY no power to stop even if you’re not involved.”

“This is INSANE,” Pettan concluded. 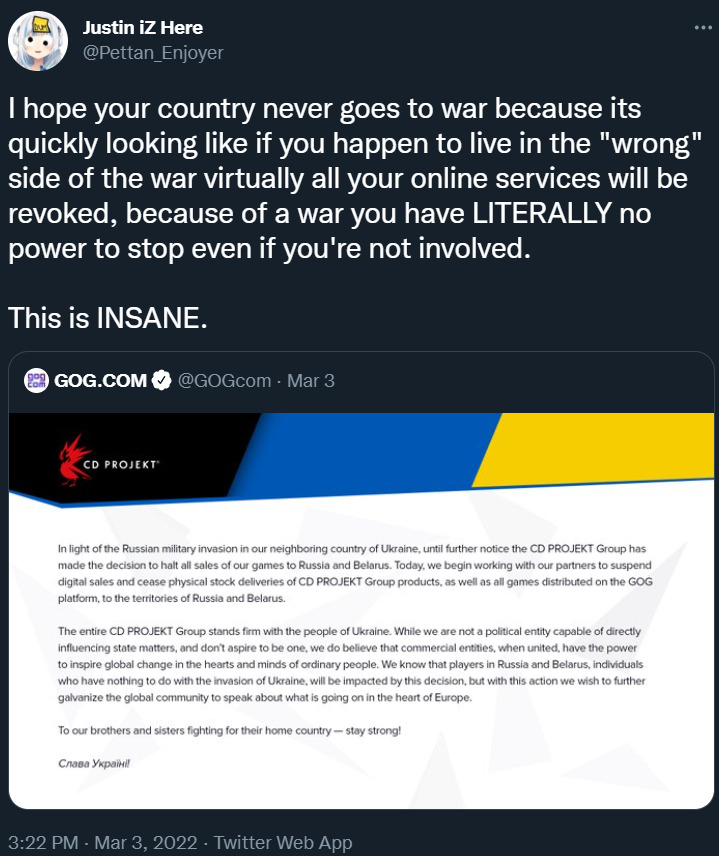 Similar criticisms — calls for charitable donations rather than exclusion of civilians — were levied at others who had denied sale of their products in Russia. This includes Polish developer Bloober Team (The Medium, Layers of Fear 2).

“Dear community, As the Russian unprovoked invasion of Ukraine continues, killing defenders and civilians alike,” the developer accuses, “we at Bloober Team have decided to stop selling our titles in Russia and Belarus across all platforms.” 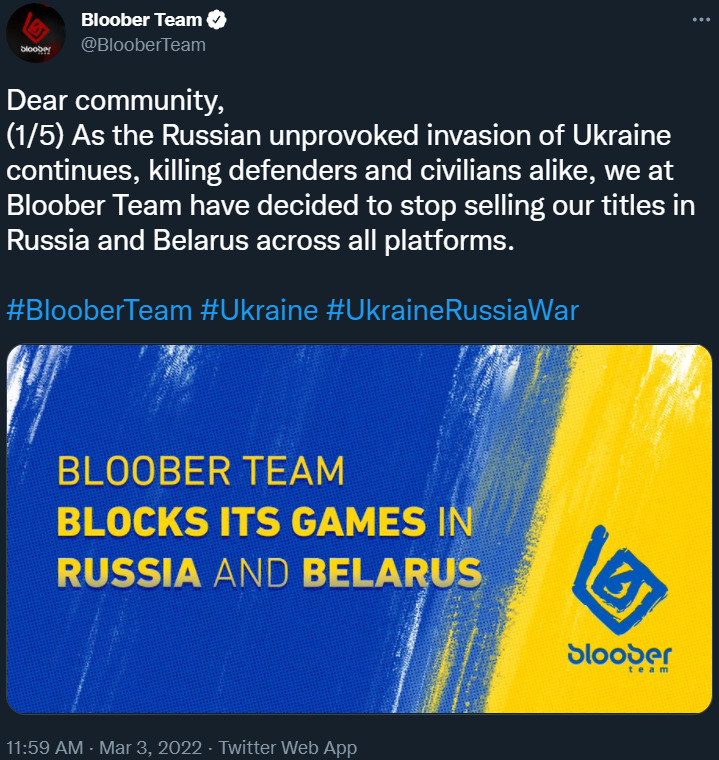 “We’ve been working with our partners to put the games down from the stores in these countries –the ban coming into effect first on Steam. Our hearts are with the Ukrainian people and this is one of several steps we’re currently taking to support them,” Bloober Team stated. 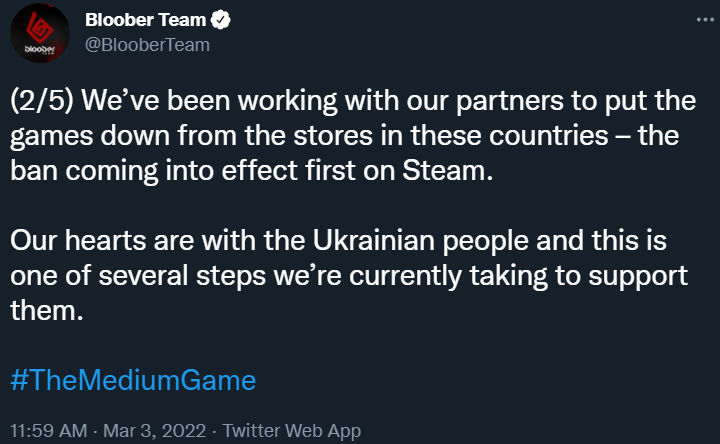 “We understand that our decision might affect many Russian and Belarussian players who are not involved in this invasion,” Bloober Team admited, “but we strongly believe that every step that can help stop the war is worth taking…”

“This includes showing a full solidarity with the Ukrainian people both with words and actions,” Bloober Team tweeted, “as well as creating pressure on the Russian and Belarussian public opinion.”

“We believe a global joint resistance can help make a difference. We want to be a part of a world that doesn’t turn a blind eye to warmongering,” Bloober Team concluded. “And we won’t stay neutral when human lives are at stake.”

Finally, Microsoft announced they had suspended new sales in Russia. President & Vice Chair Brad Smith explained, “Like the rest of the world, we are horrified, angered and saddened by the images and news coming from the war in Ukraine and condemn this unjustified, unprovoked and unlawful invasion by Russia.”

In addition to the previously announced efforts to counteract cyberattacks and “state-sponsored disinformation,” Microsoft are ” coordinating closely and working in lockstep with the governments of the United States, the European Union and the United Kingdom, and we are stopping many aspects of our business in Russia in compliance with governmental sanctions decisions.”

“We believe we are most effective in aiding Ukraine when we take concrete steps in coordination with the decisions being made by these governments,” Microsoft stated, “and we will take additional steps as this situation continues to evolve.” 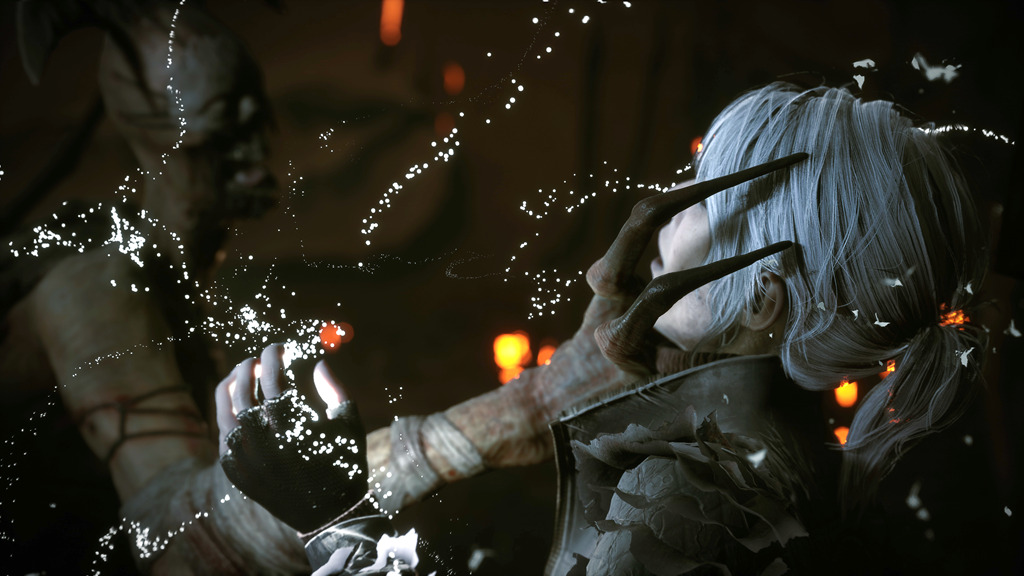 What do you think of the companies’ decisions? Let us know on social media and in the comments below.