World of Tanks developer Wargaming have announced they will no longer operate in Russia or Belarus amid the ongoing invasion of Ukraine. 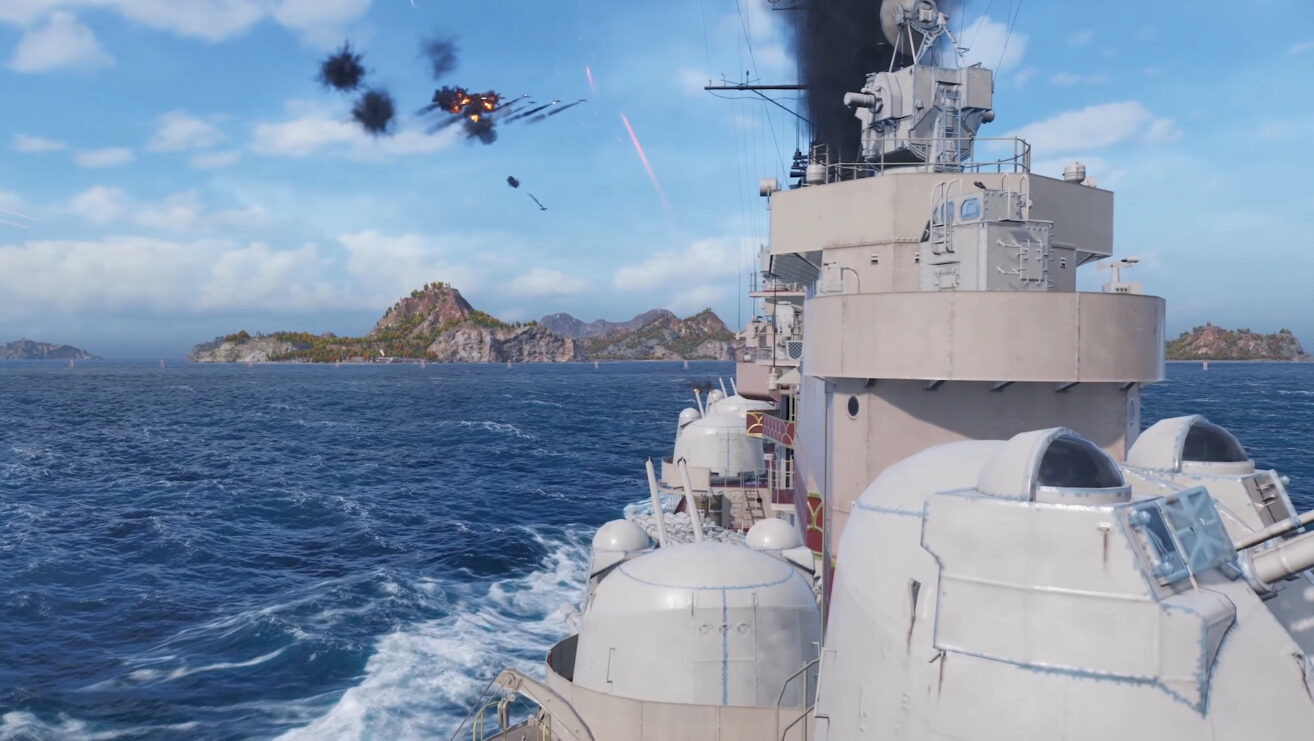 RELATED: Games Workshop And Warhammer Stop Sales In Russia To “Stand With Those Suffering,” Prove “Warhammer For Everyone” Claim Was A Lie

Wargaming are best known as the developer behind the free-to-play World of Tanks, World of Warships, and World of Warplanes games, wherein players compete against one another with historically accurate war machines. Players are also given the option to pay real-world money to acquire rarer vehicles, parts, and more.

As reported by VentureBeat, the company was founded in Belarus in 1998, and while it grew to one of the largest companies in Eastern Europe, moved to Cyprus in 2011. 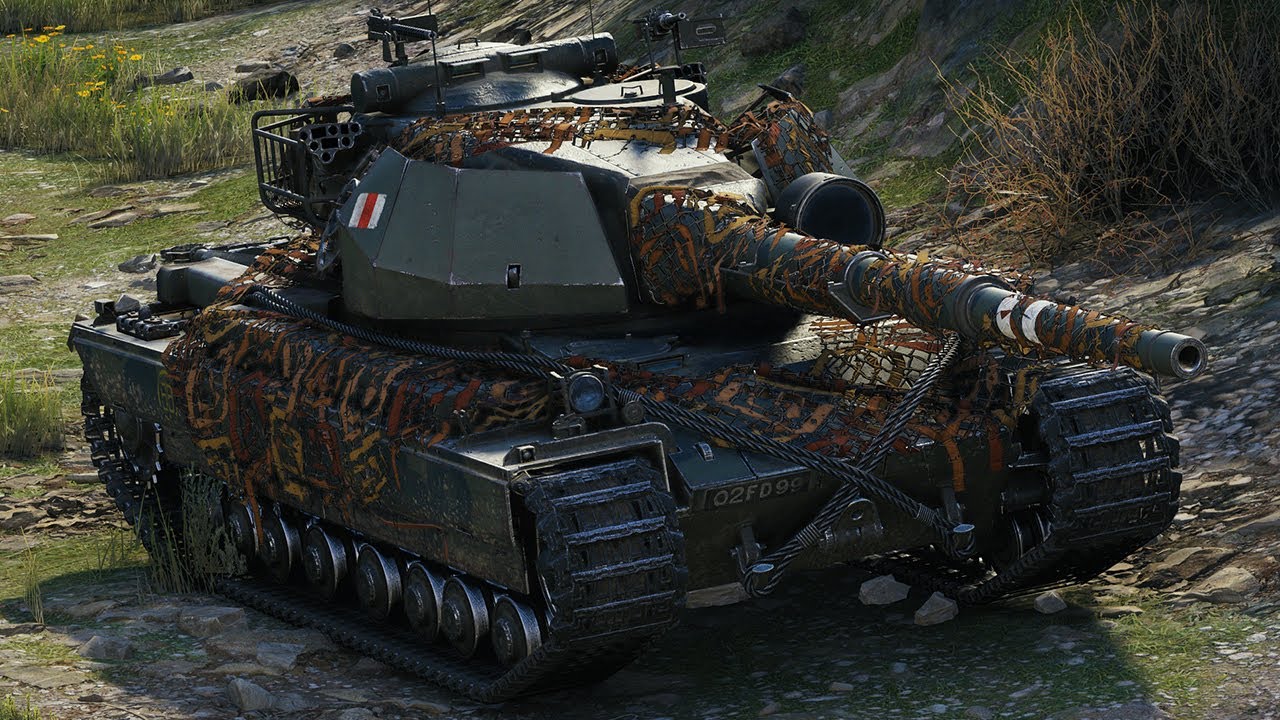 “Over the past weeks, Wargaming has been conducting a strategic review of business operations worldwide,” the statement revealed. “The company has decided it will not own or operate any businesses in Russia and Belarus and will leave both countries.” 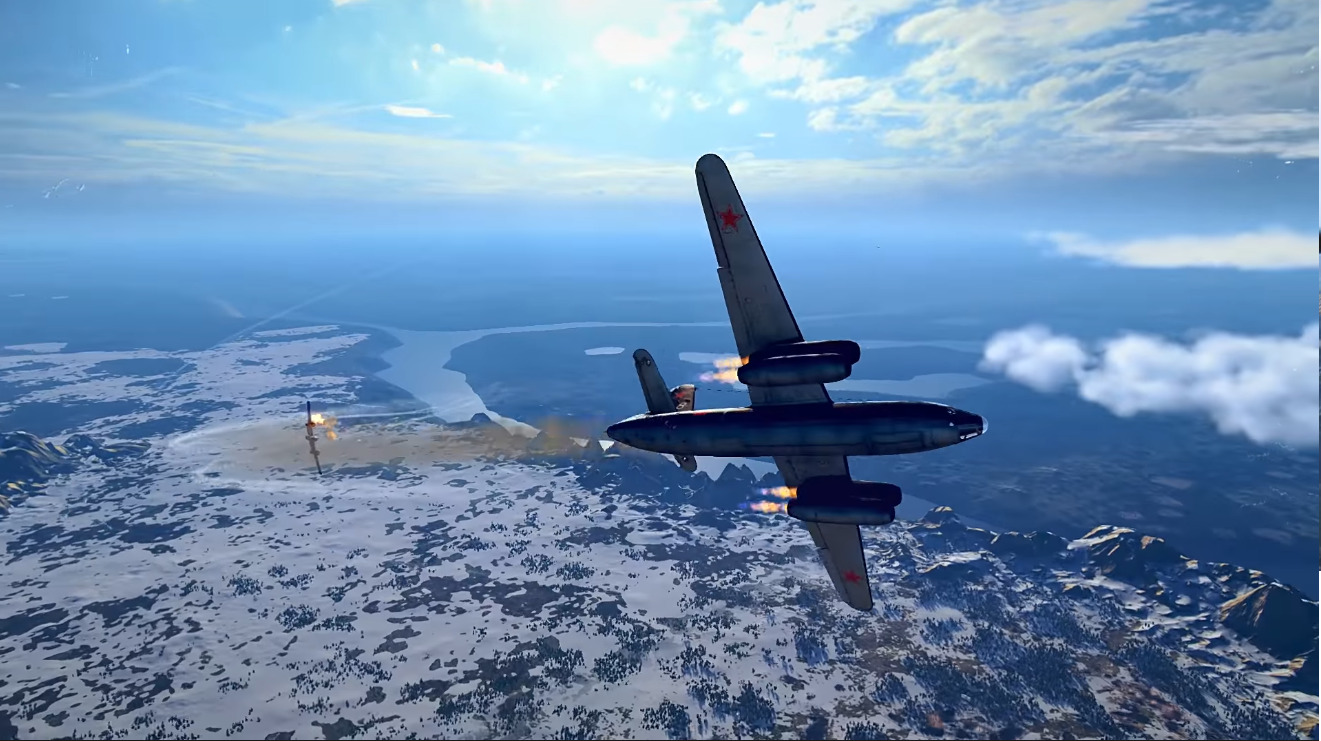 “Effective March 31 the company transferred its live games business in Russia and Belarus to local management of Lesta Studio [formerly Wargaming Saint Petersburg] that is no longer affiliated with Wargaming,” they elaborated.

Wargaming confessed, “The company will not profit from this process either today or going forward. Much to the contrary we expect to suffer substantial losses as a direct result of this decision.” 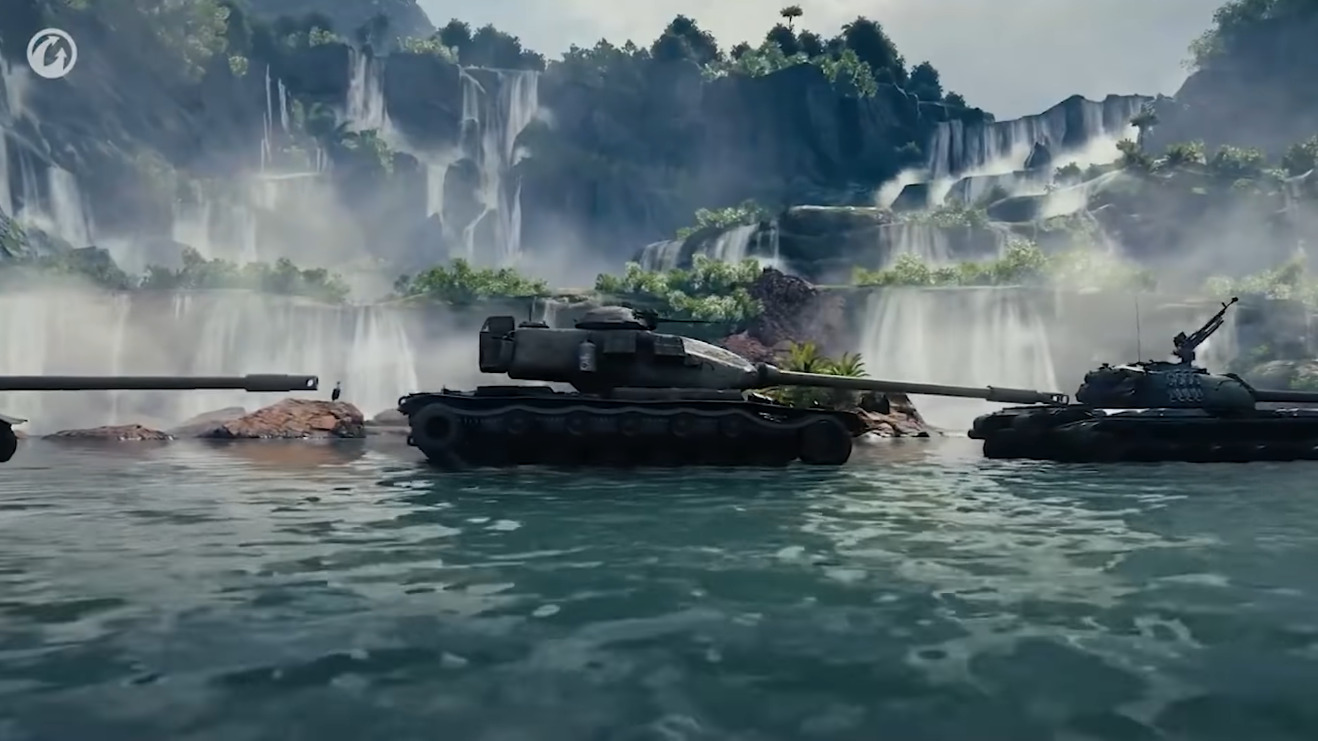 “We will be completing the operational transition with all due speed while remaining in full compliance with all laws and ensuring the ongoing safety and support of our employees,” the studio then assured. “During the transition period the live products will remain available in Russia and Belarus and will be operated by the new owner.”

“Wargaming has also started the process of closing its studio in Minsk, Belarus,” they confirmed. “We will be providing as much severance and support as possible to our employees affected by the change.”

Wargaming concluded, “Despite the magnitude of this decision, we as a company are confident in the future of our business and are committed to delivering quality games to our players.” 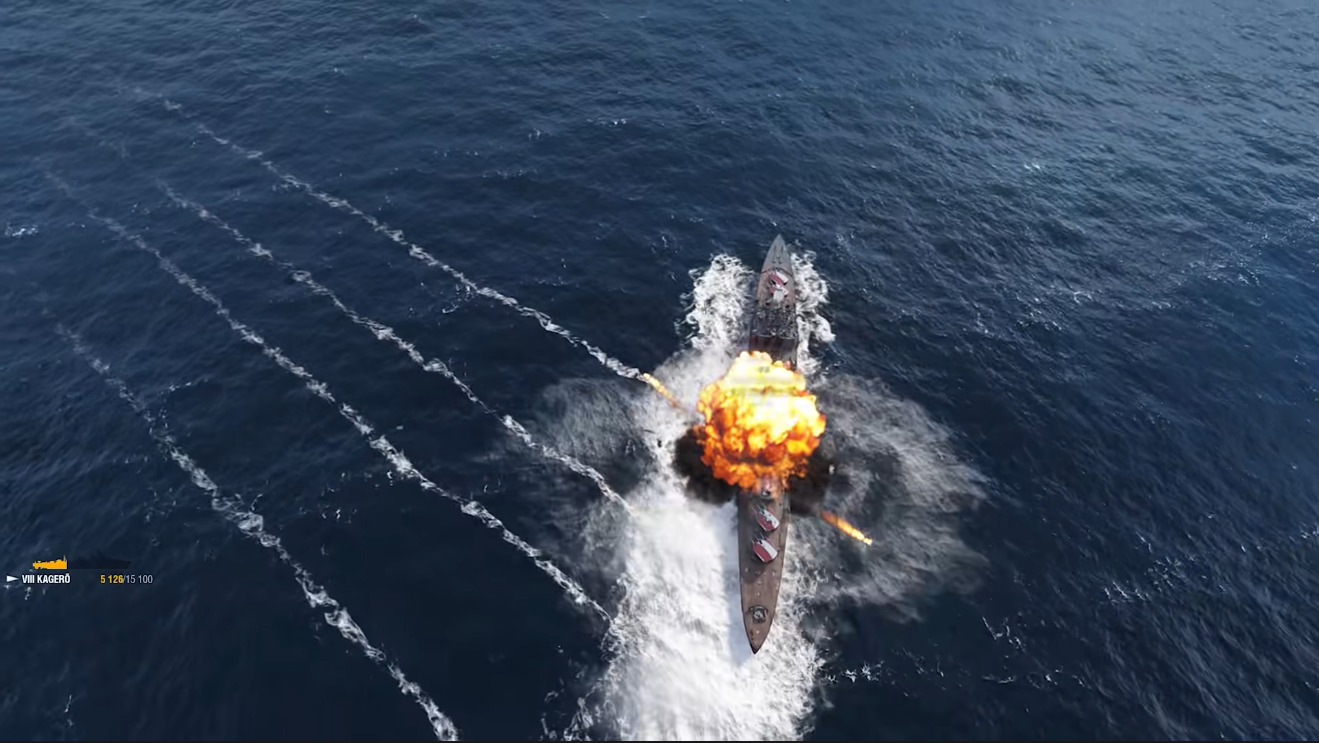 A 2013 news post on Wargaming revealed that the Russian people were a significant portion of the studio’s audience, with the country boasting a brand penetration of 80%, local concurrent users topping 1.1 million, and a contribution of a third of the studio’s player base – 15 million players out of 40 million.

World of Tanks even reached the middle of Russia’s top 20 most visited websites, trumping even Twitter, BlogSpot, and Rutracker. A 2020 Venturebeat article shows World of Tanks grew to 160 million players globally. 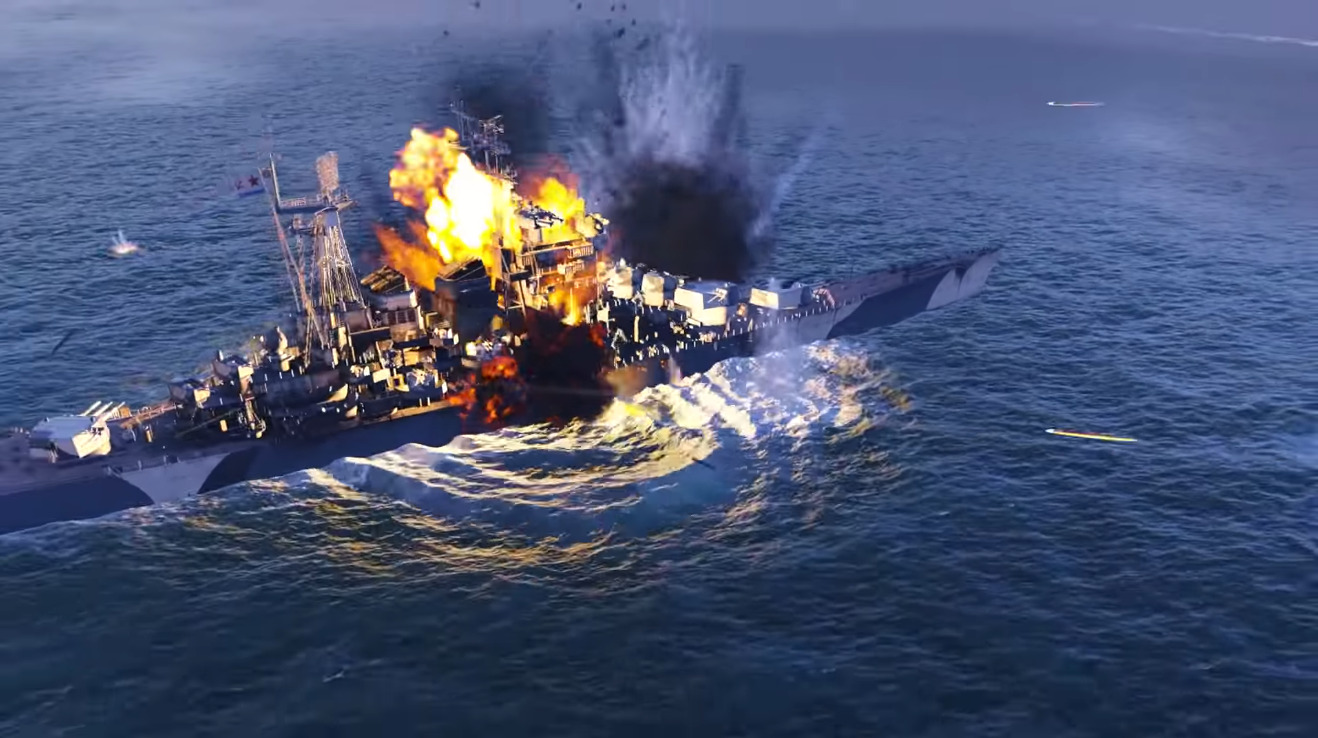 Previously, the studio had parted ways with creative director Sergey “SerB” Burkatovskiy after he voiced support for Russia, thereafter announcing that they would also be providing support for their affected staff and their families.

“At Wargaming, the safety and security of our employees is the top priority,” Wargaming wrote on February 28th. “Currently, all available company resources are helping and supporting our 550+ colleagues: providing them with alternate housing, early salary payments, additional funds to aid travel and relocation.” 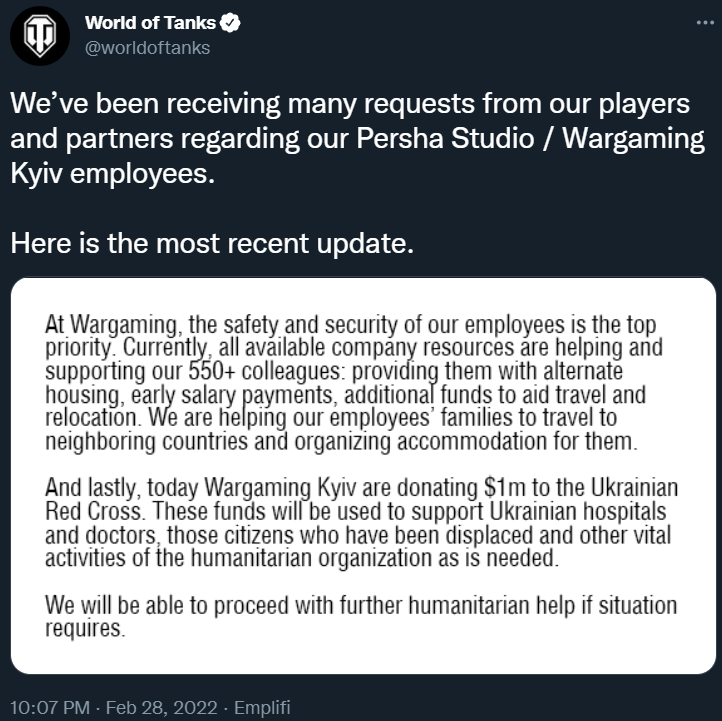 “We are helping our employees’ families to travel neighboring countries and organizing accommodation for them,” Wargaming explained. “And lastly, today Wargaming Kyiv are donating $1m to the Ukrainian Red Cross.

The developer elaborated, “These funds will be used to support Ukrainian hospitals and doctors, those citizens who have been displaced and other vital activities of the humanitarian organization as is needed. We will be able to proceed with further humanitarian help if situation requires.”

Other gaming companies who have offered charity to Ukraine or refused to operate in Russia due to the ongoing invasion include Frogwares, GSC Game World, Vostok Games, 11 bit studios, Bungie, Ubisoft, Techland, DICE, The Embracer Group, and more.

Nintendo, Microsoft, and Sony have also halted some or all of their services in Russia. 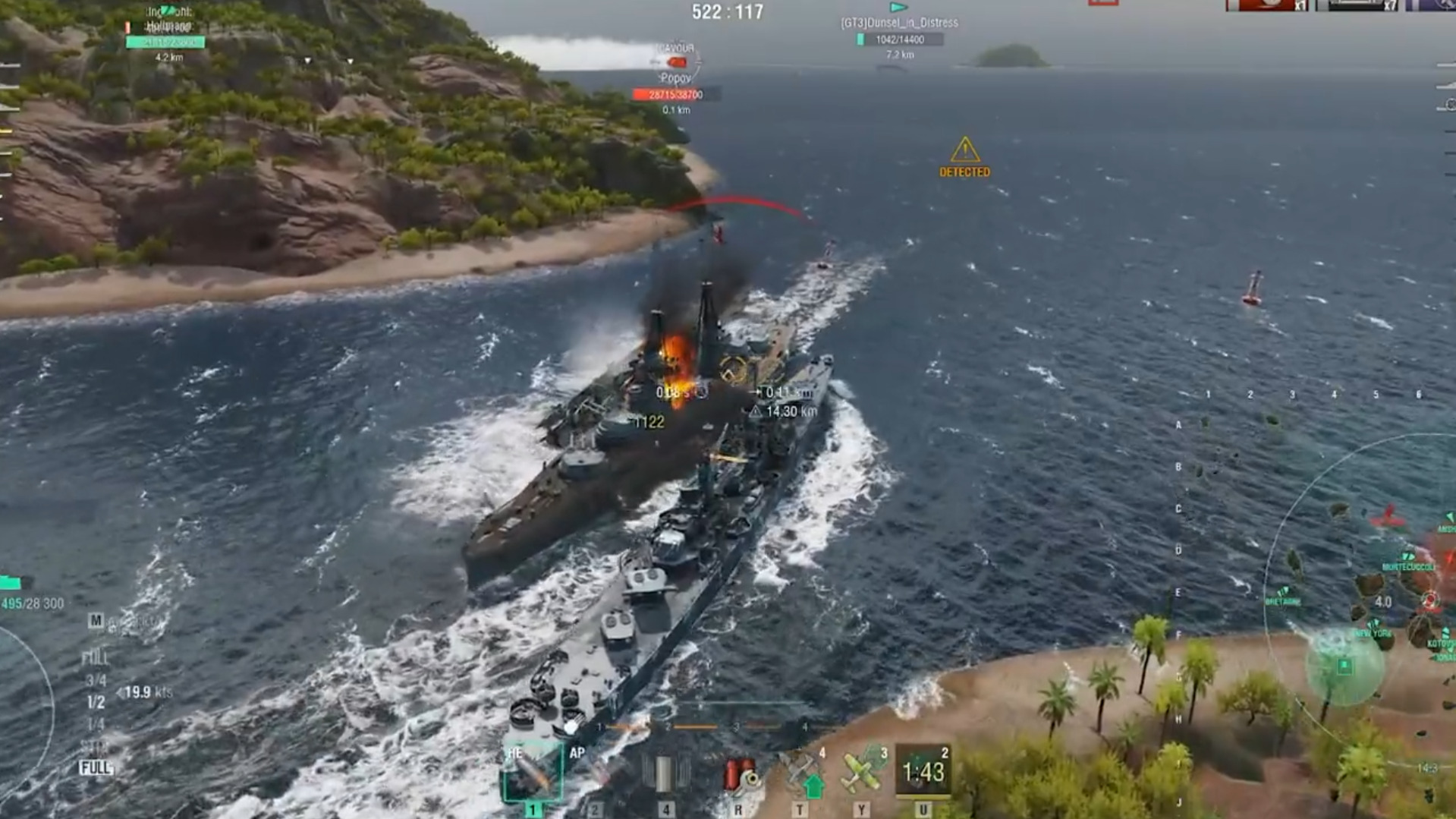