Actress Patricia Arquette, known for he role as Lila Jute in Human Nature and Allison Dubois in Medium, recently called to have Russia kicked out of NATO. After realizing Russia is not in NATO she blamed her dyslexia. 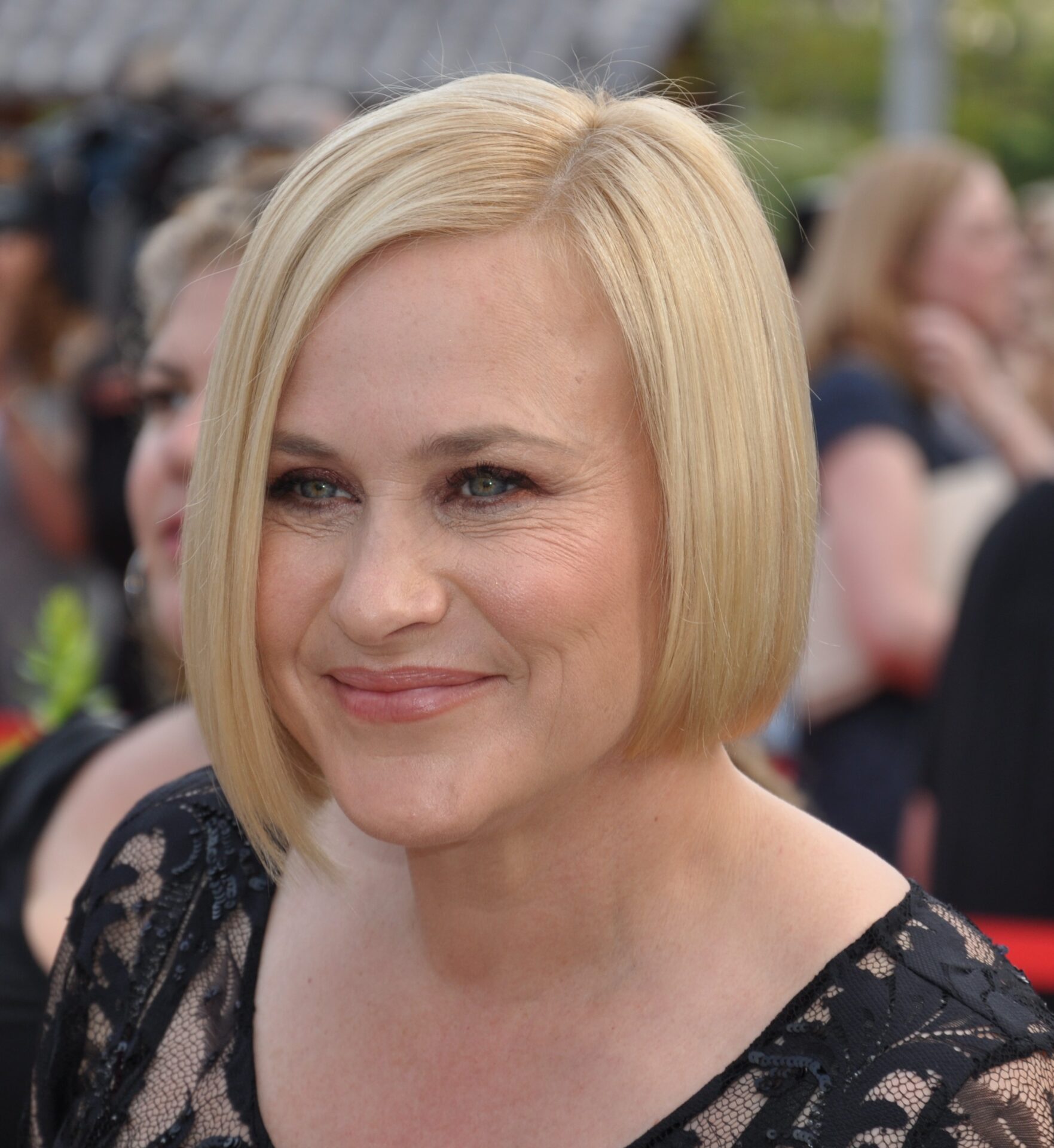 In a now-deleted tweet, Arquette responded to a Twitter post from MK-Ultra News that read, “Staff at the Zaporizhzhia nuclear power plant in Ukraine sent a message to Ukrainian media and government authorities warning that the Russian troops that took the plant are now laying down explosives around it in order to ‘blackmail the whole of Europe.'”

In response, Arquette wrote, “Kick Russia out of NATO.”

Russia is not a member of NATO. In fact, Russian president Vladimir Putin has justified his invasion of Ukraine due in part to NATO’s expansion eastward.

The Associated Press even notes, “He accused the U.S. and its allies of ignoring Russia’s demand to prevent Ukraine from joining NATO and offer Moscow security guarantees.” 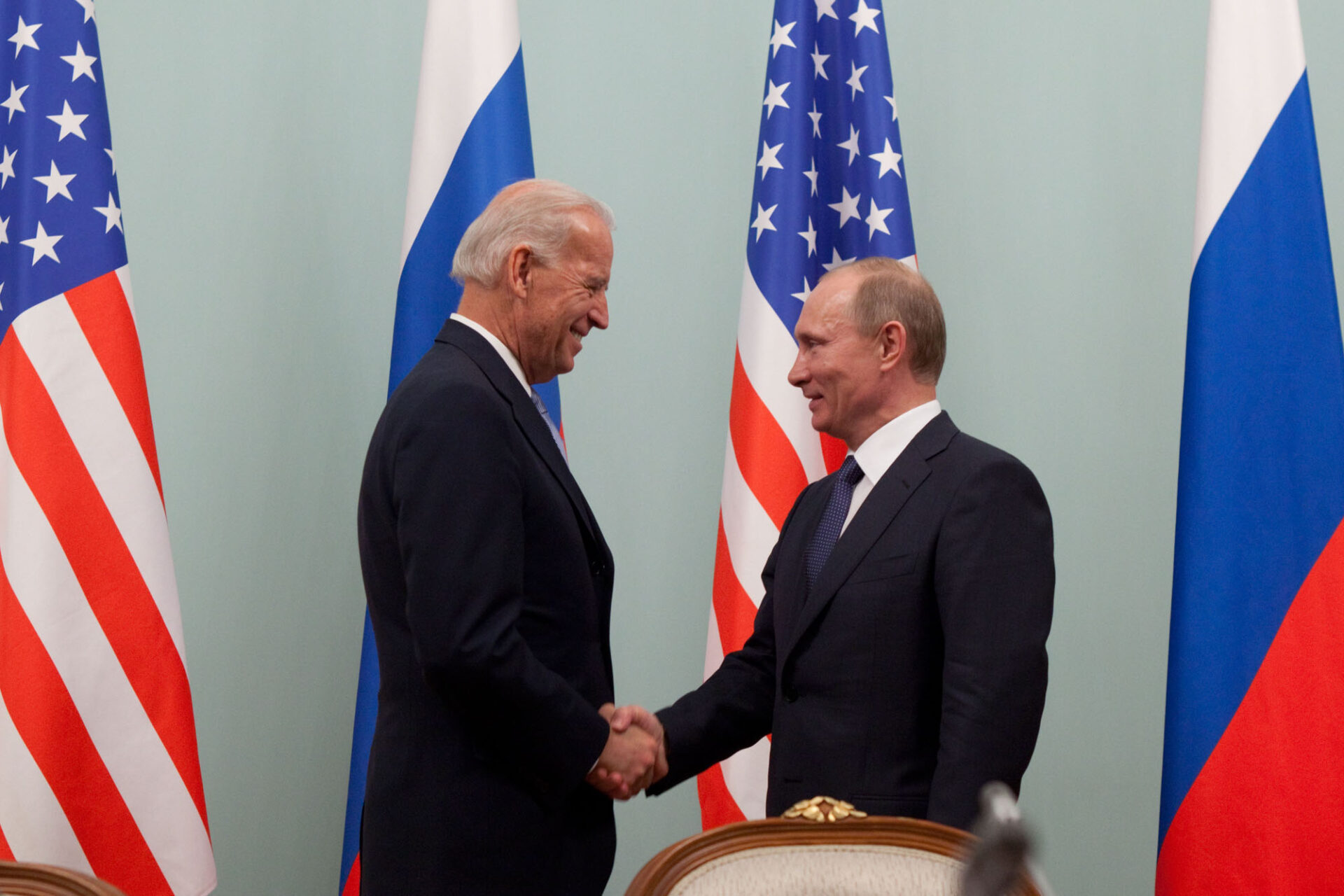 Arquette would quickly delete the tweet that exposed her complete lack of knowledge about what is happening in the region.

She then claimed she meant the United Nations and that her dyslexia caused her to write NATO instead of UN.

On March 4th, she tweeted, “I’m dyslexic. It’s in my bio and has been for years. A couple 14 hour work days laters and I flipped NATO and UN. You will live.” 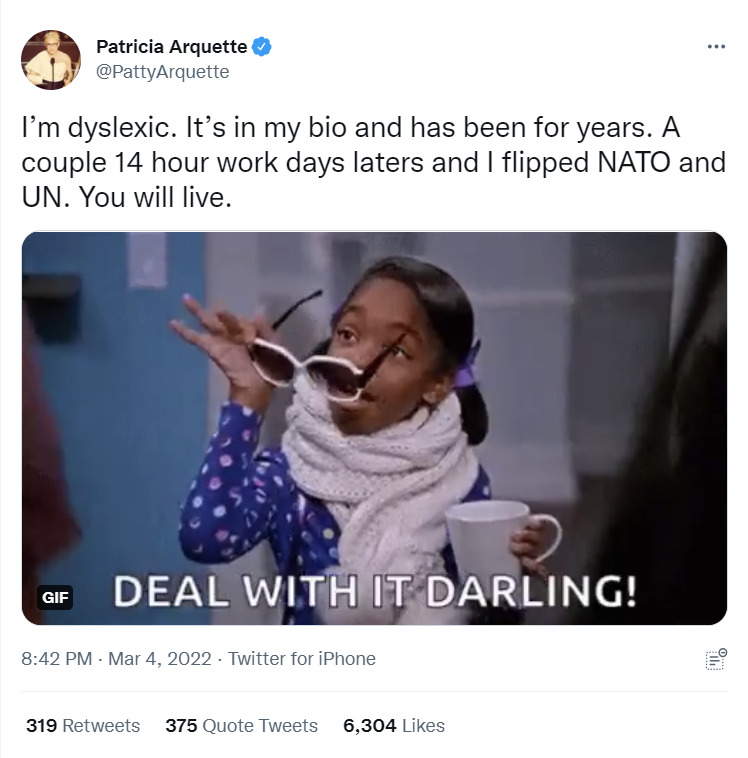 An archive of her Twitter profile on February 28th does not state she is dyslexic in her bio.

While it’s not in her profile, she’s claimed to have dyslexia multiple times on Twitter with the earliest claim being in 2016

Arquette would double down on the idea that it was her dyslexia that caused her to write NATO instead of UN in a tweet response to Jim Swift.

Swift wrote, “Imagine being Patricia Arquette and not looking at your phone for like an hour and coming back to this.”

Arquette responded, “I really couldn’t give 2 s***s. I’m dyslexic I meant UN. They can cofvefe themselves.” 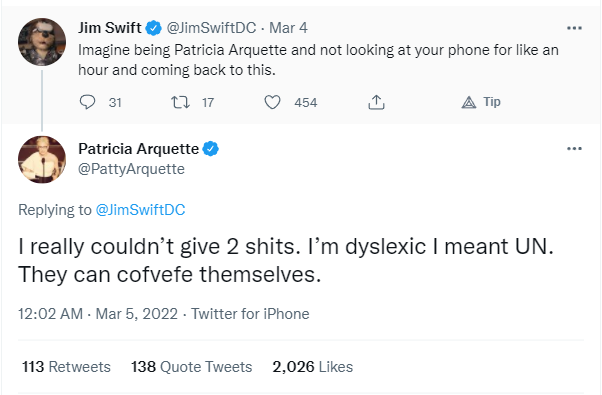 In a response to another Twitter user, Arquette wrote, “And I explained I’m dialectic and transposed the word for UN .”

She added, “P.S it’s not as if I ginned up an armed terrorist attack against America.” 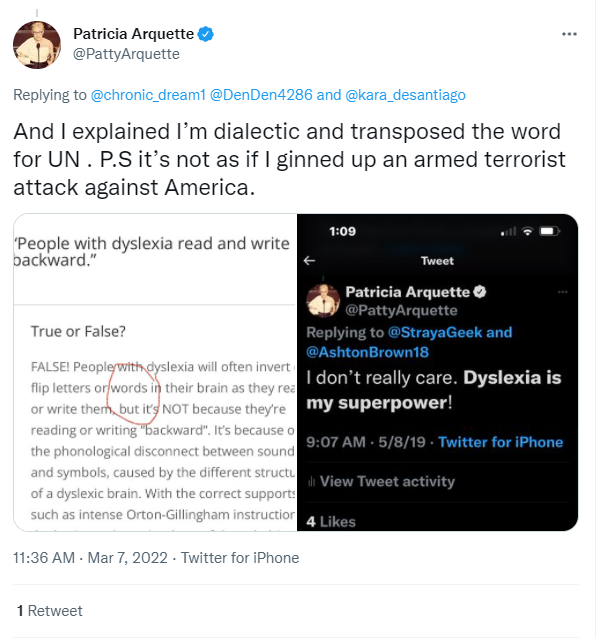 While Arquette claims her dyslexia caused her to write NATO instead of UN, she has also tweeted numerous times about NATO and it does not appear she meant to type UN in those cases.

On March 3rd, she responded to another MK Ultra News tweet writing, “NATO better tell him to cut this s*** out.” 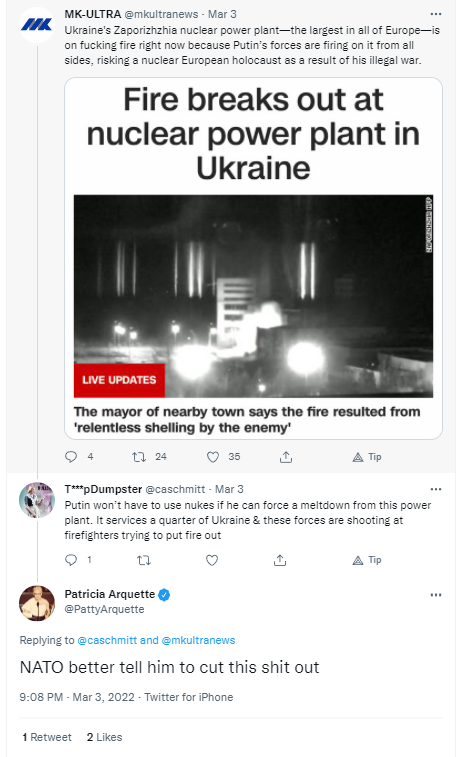 On February 25th, she also tweeted, “Trump tried to take us out of nAto because it’s what Putin wanted. #Weakling“

And then on February 22nd she wrote, “Remember when Trump wanted to pull us out of NATO? Funny Putin wanted the US to do that too.” 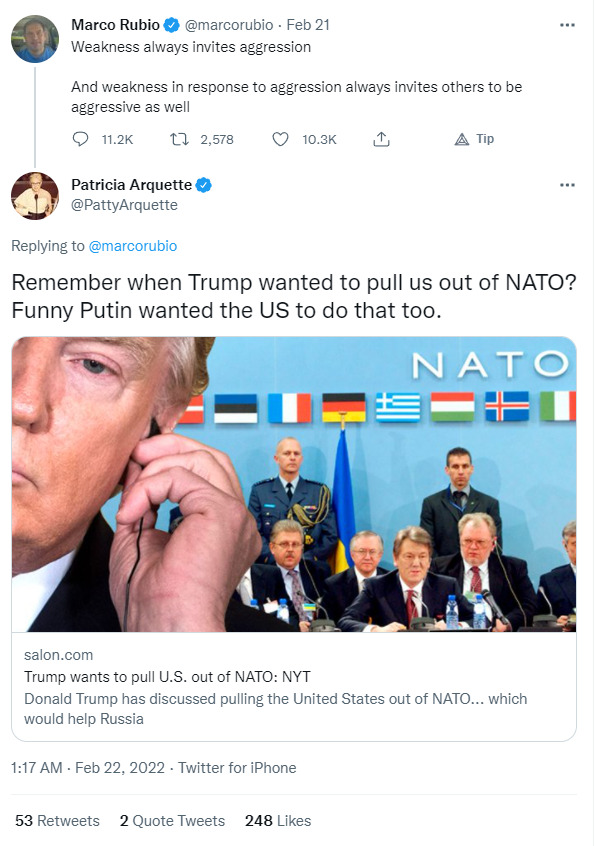 NEXT: Stephen Colbert Says Skyrocketing Gas Prices Are Worth ‘A Clean Conscience’