In his latest take on the ongoing issue of race-swapping in comic books – an issue which he seems to flip-flop on every time he speaks to it – Image Comics founder Erik Larsen has claimed that “the original sin at Marvel and DC was making every character straight and white,” but argued against the concept of race- and sexuality- swapping as a counter. 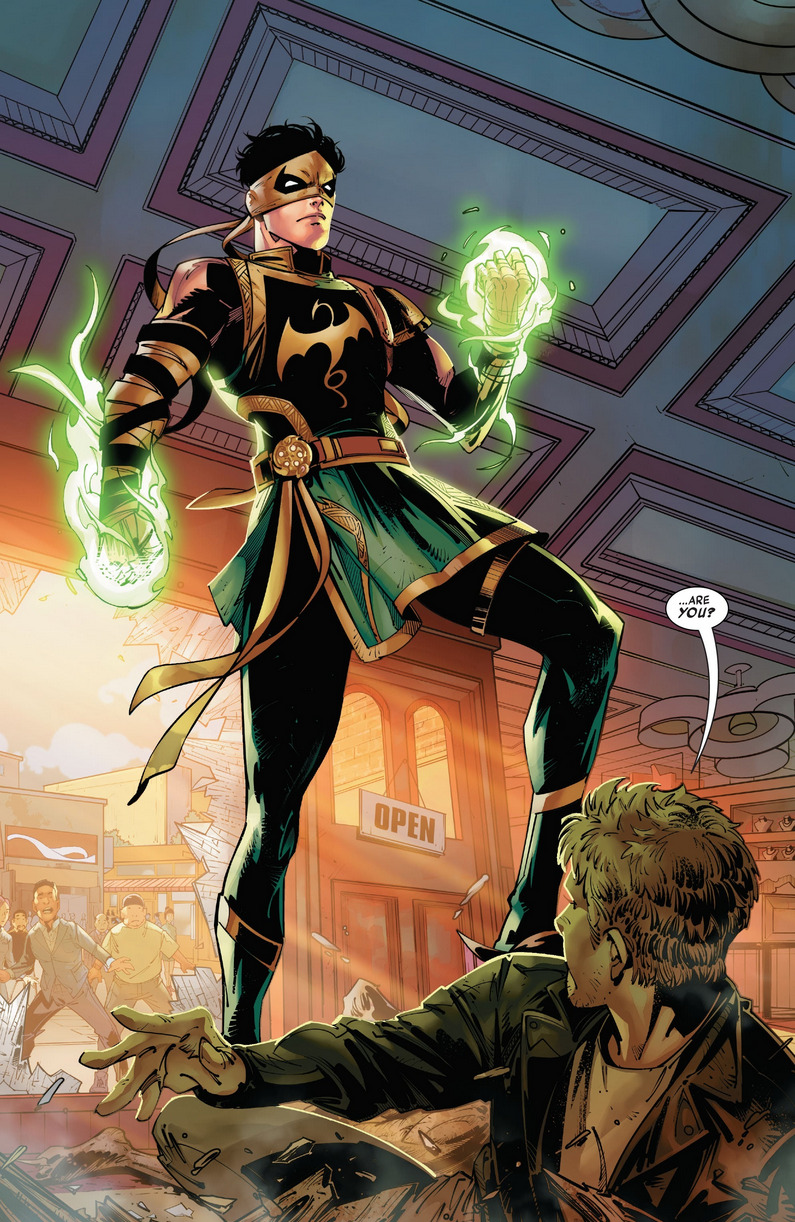 Taking to Twitter on April 9th, Larsen abruptly declared to his followers, “The original sin at Marvel and DC was making every character straight and white,” before rhetorically asking, “Now that there’s a huge push for representation they’ve been caught with their pants down but how can they fix the problem?”

“With the movies it’s easy–just cast your film with a diverse group and ignore the comics and the fans on Twitter because nobody cares,” he bizarrely and dismissively argued. “In the comics, that’s more difficult because you can’t just swap the races of existing characters.”

Rejecting the trend seen in recent years with such characters as Kid Flash, Master of the Universe’s Andra, and the near-entire cast of Marvel’s Eternals, Larsen suggested “The ideal solution would be to create a whole mess of new characters which are diverse and then use those characters in comics and movies – – but creators don’t want to give Marvel and DC their ‘great ideas’ so that’s not going to work.”

“Instead they’ll do things like have characters inherit the role from a white character which pisses off the fans of the original character and always seems like a temporary change,” he explained. “Inevitably the original will return and that will leave their replacement out in the cold.”

Larsen ultimately opined, “If they’re savvy, they can transition their replacement character into a new role but largely it’s pretty messy and leaves readers on all sides pissed off.”

Responding to a fan who replied to his thread, “I can’t wrap my head around the idea of needing a hero to be just like you in every manner to be happy,” Larsen accused, “It doesn’t even have to be that. But if a title never includes anything but white characters–in this day and age–I would think something’s going on with that creator.”

Curiously, just prior to this accusation, Larsen responded to a Brazillian fan who asserted “Real comic fans don’t care about skin color or ethnic background, they care with character, stories etc.,”

Larsen said, “Understand that you aren’t every fan. Your experience is not universal.”

“It’s foolish to assume that everybody feels the same way that you do,” he said. “Many readers like having somebody that looks like them exist in the comics they read.” 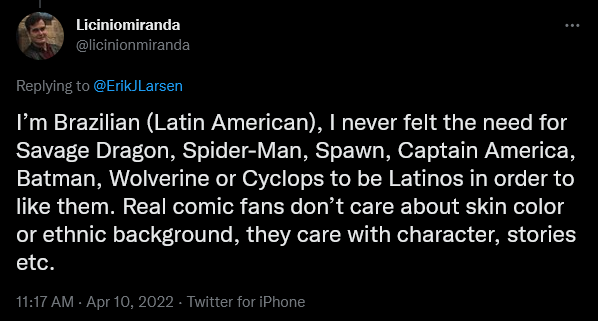 RELATED: Terry McGinnis To Be Race-Swapped For Batman: Beyond The White Knight In Order “To Diversify The Line”

Larsen would later add – again without a hint of irony – that he was “not a fan of characters whose only schtick is their racial or sexual identity.”

As noted above, despite Larsen’s recent headstrongness towards the topic, the Savage Dragon creator has continued to bounce back and forth between conflicting opinions nearly every time the subject is brought up.

On April 7th, Larsen took to Twitter to tell his followers, “For some reason the conventional wisdom at Marvel and DC is to have new characters assume the identities of old characters. But if I’m a fan of Iron Man–I’m absolutely NOT buying your s****y new Iron Man. I WANT it to flop so that old Iron Man can return.”

“And if you’re going to reinvent a character from the ground up–why NOT just create a new character?” he continued. “You’ve done 90% of the work already–why not give that character a new name and let the old one continue to exist?”

Yet, roughly two weeks prior on February 23rd, Larsen advocated, “Instead of changing Punisher’s chest emblem they should just have Frank finally realize that he’s gay.”

“And the beauty of it–is that it wouldn’t alter the comics at all,” he argued, despite Frank’s established origin involving the death of his wife and children. “He’d still be dressing in leather, ignoring the ladies and hanging out in bars with other sweaty dudes.”

“And then the Punisher skull would take on a whole new meaning,” Larsen pushed. “and it would just kill the dudes who brandish it–they’re such a homophobic lot.”

What do you make of Larsen’s take on Marvel and DC’s “original sin”? Let us know your thoughts on social media or in the comments down below!