Long before he was anyone of note for his work in the series Outlander, Bloodshot star Sam Heughan traveled to Hollywood from his native Scotland to audition for one of the most coveted roles there is: that of Superman.

This occurred all the way back in 2006 when Superman Returns was the next phase in the saga of The Man of Steel and, of course, he lost out on the lead in that film to Brandon Routh, but regardless, Heughan trained hard for his audition to get in heroic shape.

“I had a trainer and he was like, ‘You need to get bigger. You need to be able to fill out the cape.’ He was like, ‘Eat more protein,’” he said in an edition of Variety’s podcast Just For Variety.

By eating more protein, Heughan learned things about his diet and found he had more energy than ever. “I remember the first time I had chicken or something and just suddenly, I was like, ‘Oh my God, I have all this energy. And I don’t feel hungry all the time,’” he added.

Like a Lenten fast, meat was not a huge part of his meals back then until he got to the States. “I grew up a pescatarian [fish eater] or sort of vegetarian-pescatarian,” Heughan said. “I didn’t start eating meat until I came to America when I was 24. It was all these delicious burgers and food.”

Broadening his edible horizons didn’t win him the cape of Big Blue but he would become tied to Batman in a stage show known as Batman Live. That brought him to the topic of the Dark Knight and The Batman which he has high hopes for.

Clearly yet to see the film, Heughan stated, “I’m excited about the new Batman movie. I think that looks fantastic.” 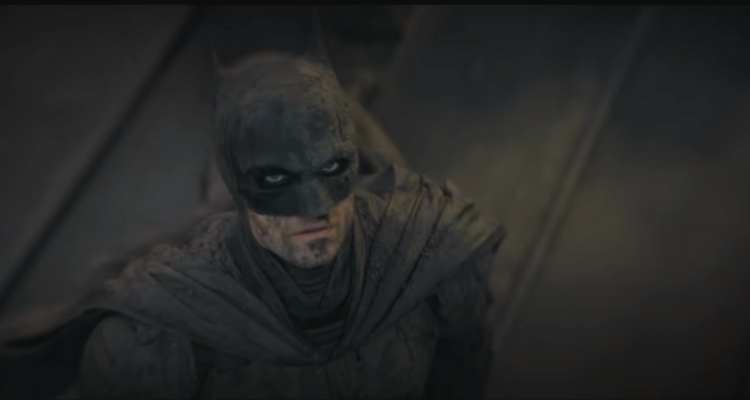 That makes one. He isn’t enthralled by what comic book movies have become, believing they are bloated now. “I think the other superhero movies kind of lost their way a bit,” he said.

“They’ve become, I think, a little too obese in a way, but anything character-based — I mean, Batman’s a great one because he’s not a superhero. He’s just an interesting character. Something with a good backstory,” Heughan explained.

The Batman, the preceding Nolan films, and other movies in their orbit like Joker tend to stand out by putting the focus on the hero or one of his rogues.

Such is true of Robert Pattinson’s Bruce Wayne, that of Christian Bale, Joaquin Phoenix’s Arthur Fleck, and to an extent Paul Dano’s Riddler and Harvey Dent as portrayed by Aaron Eckhart in The Dark Knight. Each had a telling arc that paid off in becoming the villain or the hero he’s meant to be.

What Heughan likely alludes to are the complaints that Marvel movies are too effects-heavy and are normally ensemble action adventures lacking sufficient character development individually or the flexibility for the vision of an auteur like Nolan.

I hear them a lot too and these grievances are a bit overstated in my opinion when Marvel gave us the most fleshed-out versions of Iron Man, Captain America, and Spider-Man that they could – punctuated by complete and compelling arcs for all three.

Cap and Iron Man’s stories are wrapped up definitively by the final shot of Avengers: Endgame and the first act, if not the second, of Tom Holland’s Spidey’s journey concluded in No Way Home with an unexpected but very back-to-basics turn that sees him grow as a solo hero.

Marvel also beat DC and Joker by a year in the villain-focused narrative department with Thanos in Avengers: Infinity War, showing their characters were far from weak and rather dynamic even if the films were becoming cookie-cutter.

The Batman tries like mad to be different and the character-based thriller brings the effort to HBO Max this week.

NEXT: The Marvels Director Nia DaCosta Blames Captain America For Thanos’ Snap: “He Should Have Just Sacrificed Vision”