My Hero Academia mangaka Kohei Horikoshi has reportedly revealed that due to the low popularity of the series’ villains, a significant amount of content was cut from the Forest Training Camp Arc.

[WARNING: Massive spoilers for My Hero Academia follow below.] 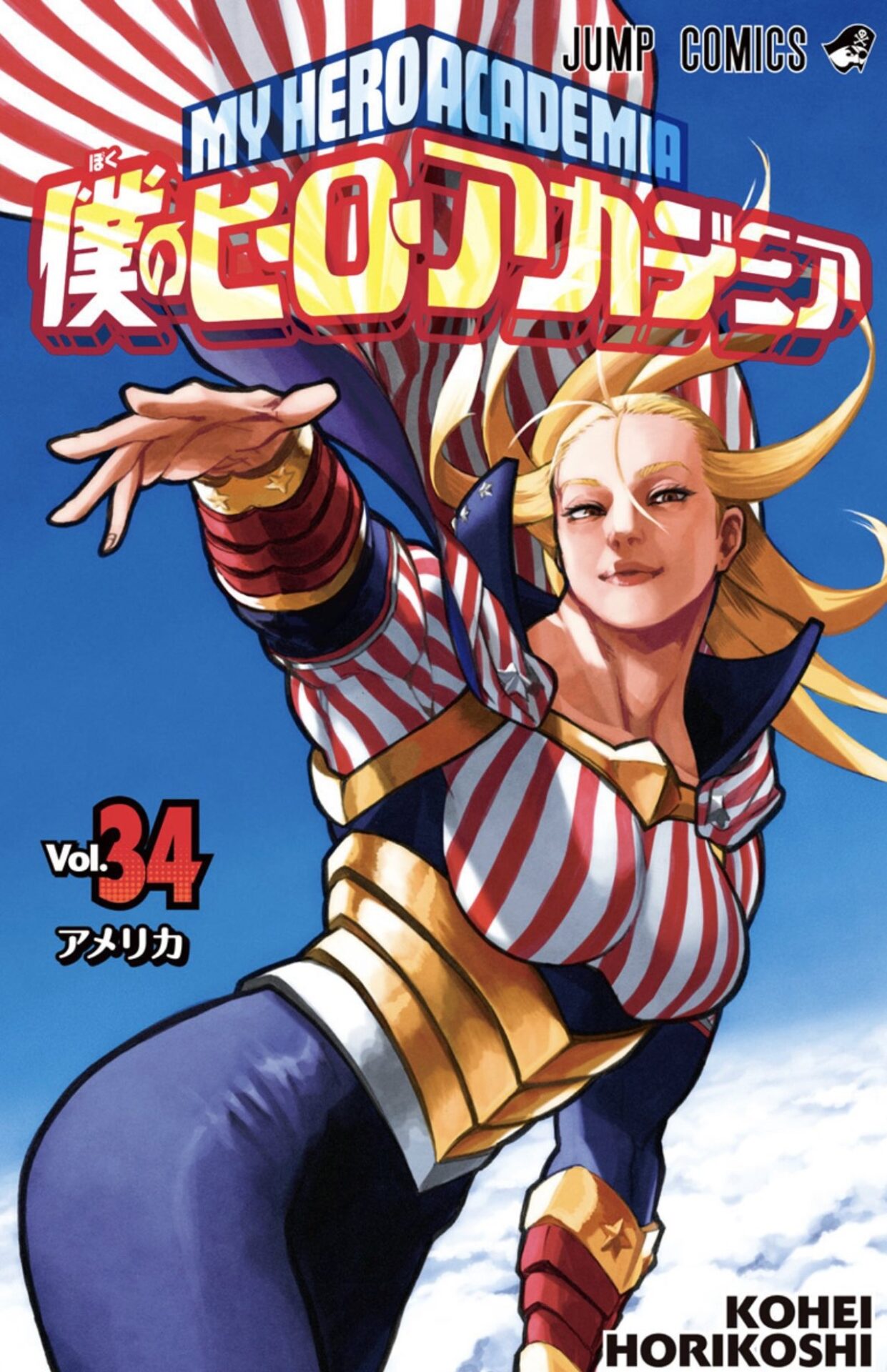 Horikoshi provided this insight in the Extras section of the latest volume of My Hero Academia, of which some copies were made available for sale ahead of its official May 2nd release date – a move that has become increasingly common for Shonen Jump volumes in recent months.

Therein, according to Japanese-literate Twitter user @Color_Division, Horikoshi explained that not only was the twist reveal of Aoyama as the Class 1-A traitor supposed to occur during the Forest Training Arc, but also that said arc was cut short due to a typical combination of the series’ then-low popularity as well as pressure from the Weekly Shonen Jump editors. 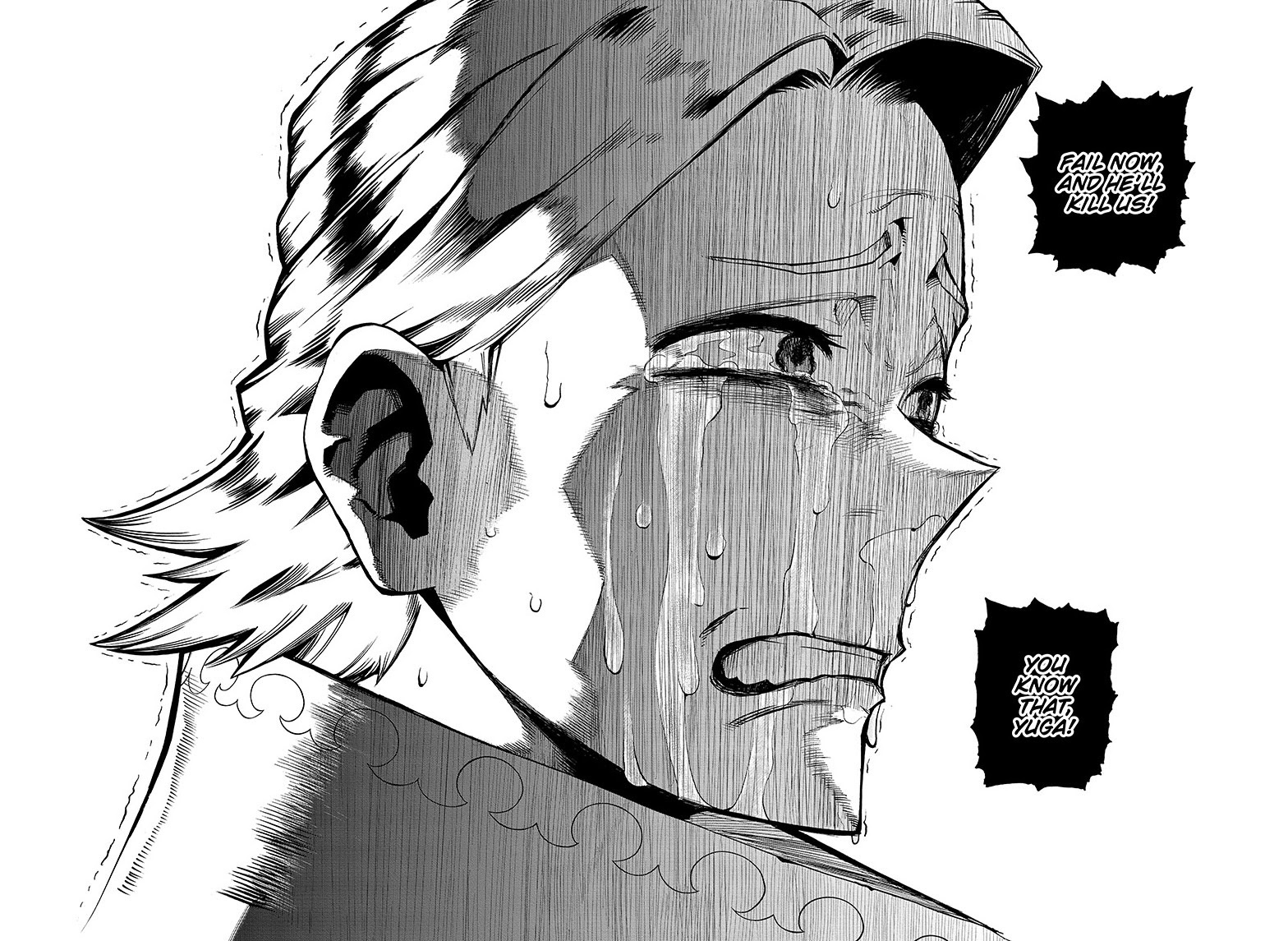 “The Aoyama reveal was supposed to happen in volume 9-10 according to volume 34 extras,” they wrote. “Maybe this goes with a previous statement, where Hori said he had to cut a lot of content in the training camp raid due to the pressure of low popularity in that arc.”

This statement, which appeared in the playbill issued to attendees of the Spring 2022 My Hero Academia The Ultra Stage – A Symbol Of Peace stage play, saw Horikoshi reflect on how “Up until the summer training camp the series had a pretty steady amount of popularity but the moment I hinted there were villains coming—crash!  The popularity suddenly dropped.” 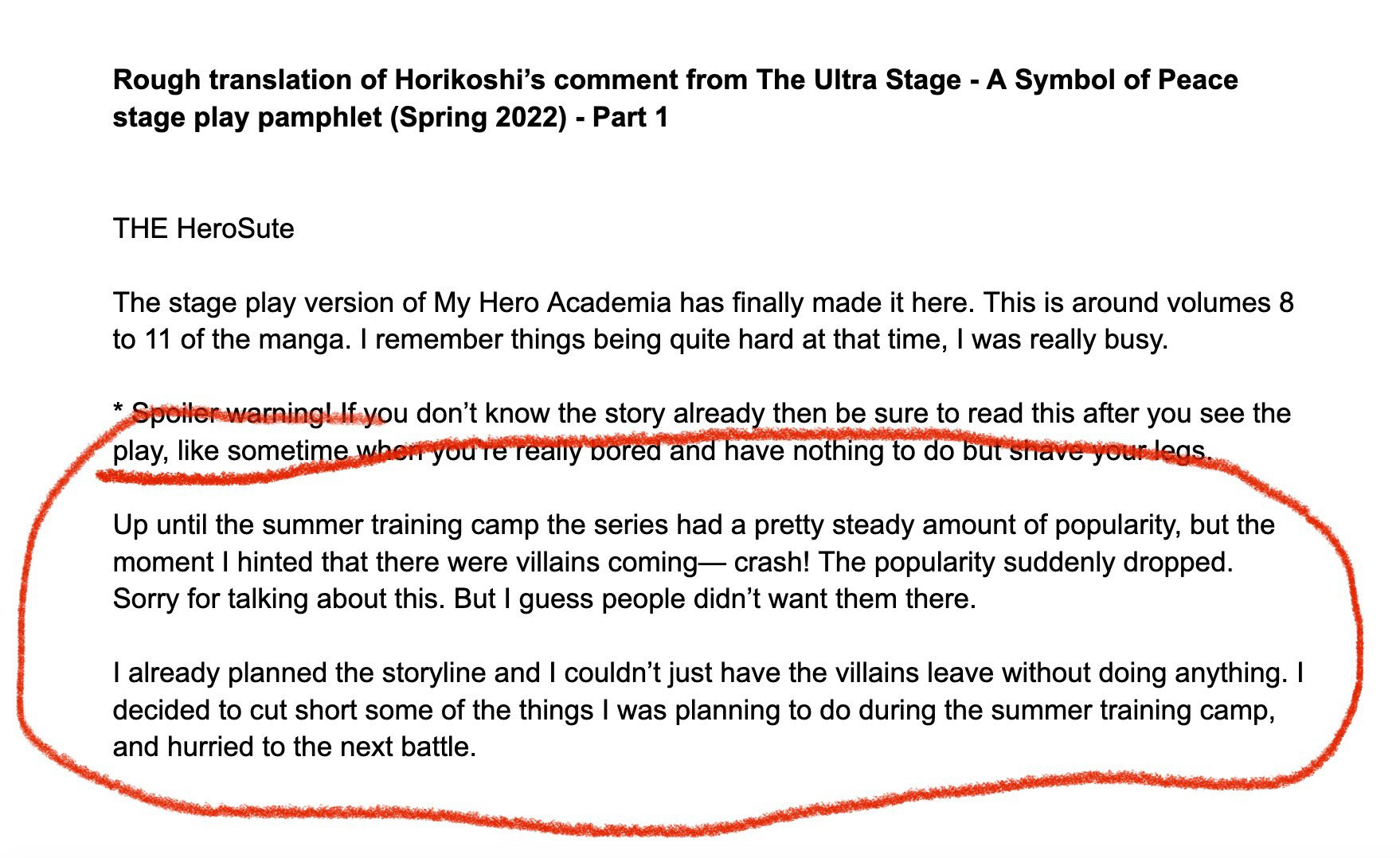 “Sorry for talking about this,” the mangaka added, as per a rough translation of the playbill provided by Twitter user @Volkerstime. “But I guess people didn’t want them there.”

He further noted, “I already planned the storyline and I couldn’t just have the villains leave without doing anything. I decided to cut short some of the things I was planning to do during the summer training camp and hurried to the next battle.” 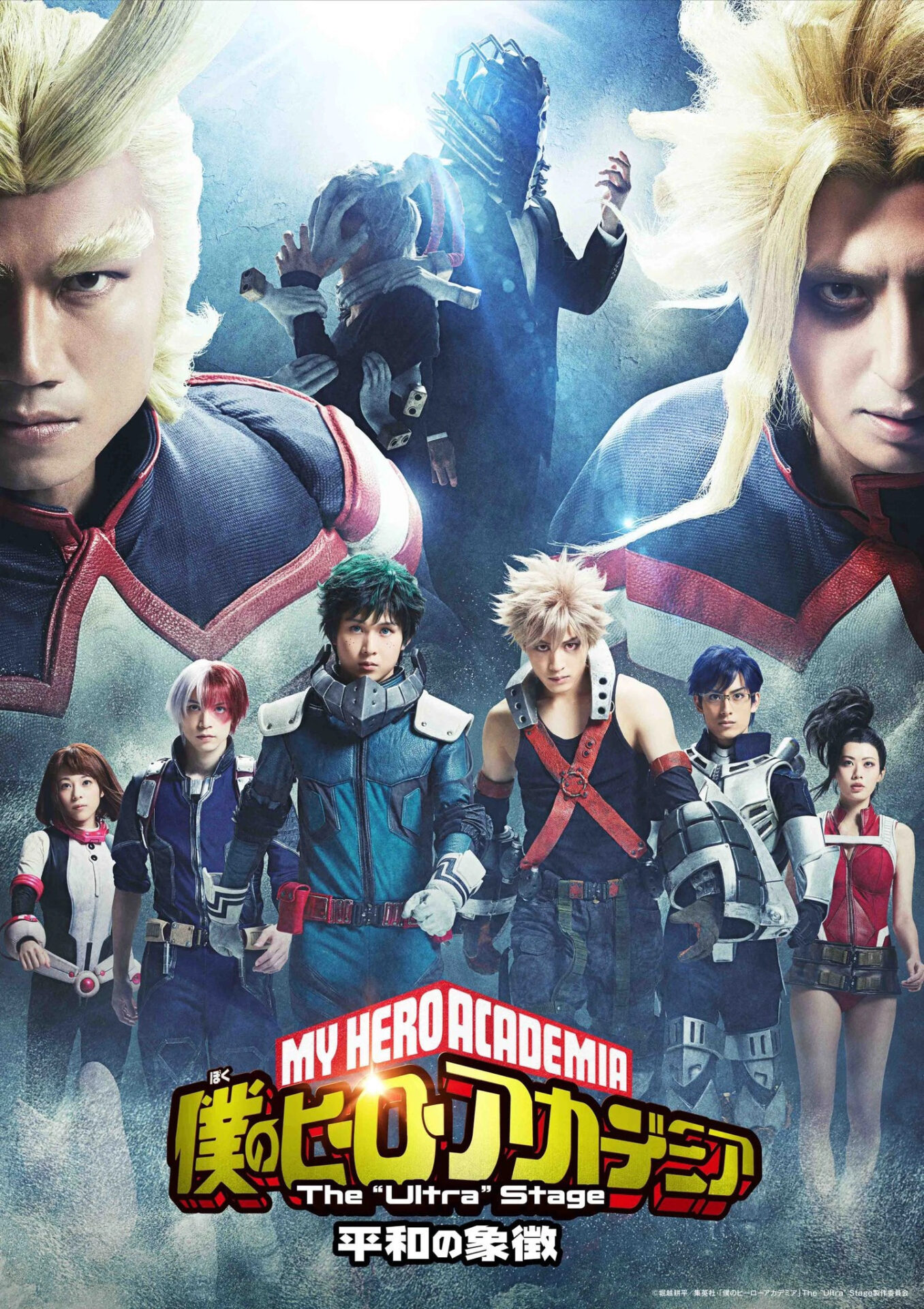 Taking notice of @Color_Division’s tweet, @Volkerstime clarified for English-speaking fans, “Horikoshi does not indicate specifically in volume 34 that it was because of bad reception. But his Ultra Stage 2022 interview makes the dots extremely easy to connect as the Aoyama reveal was planned during the arc he felt pressured to rush through: Forest Training.” 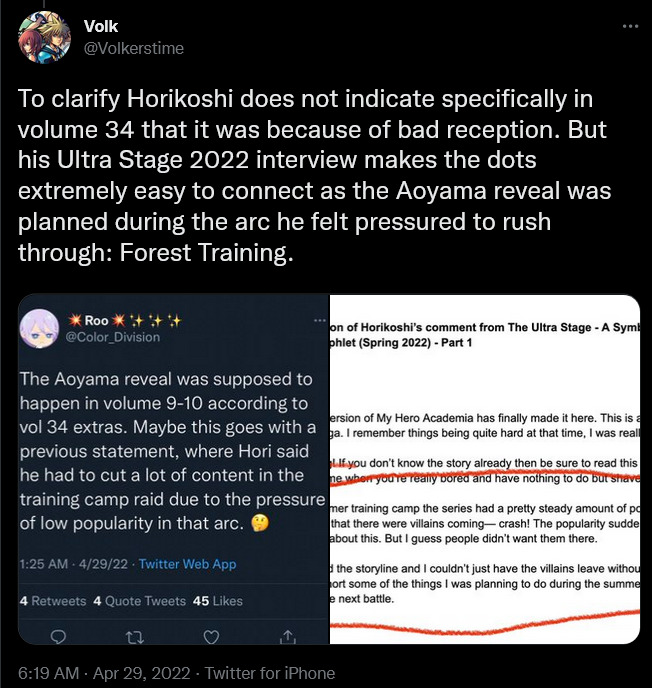 Combined with his preference for writing villains and anti-hero characters and storylines, it’s more than likely that Horikoshi’s initial outlook for the series saw it going down a much darker path, but editorial believed he needed to fully establish the series with readers before attempting to do so.

Thankfully, the mangaka would finally get his chance to delve into a darker, more villain focused arc beginning with the series’ appropriately named 220nd chapter, My Villain Academia. 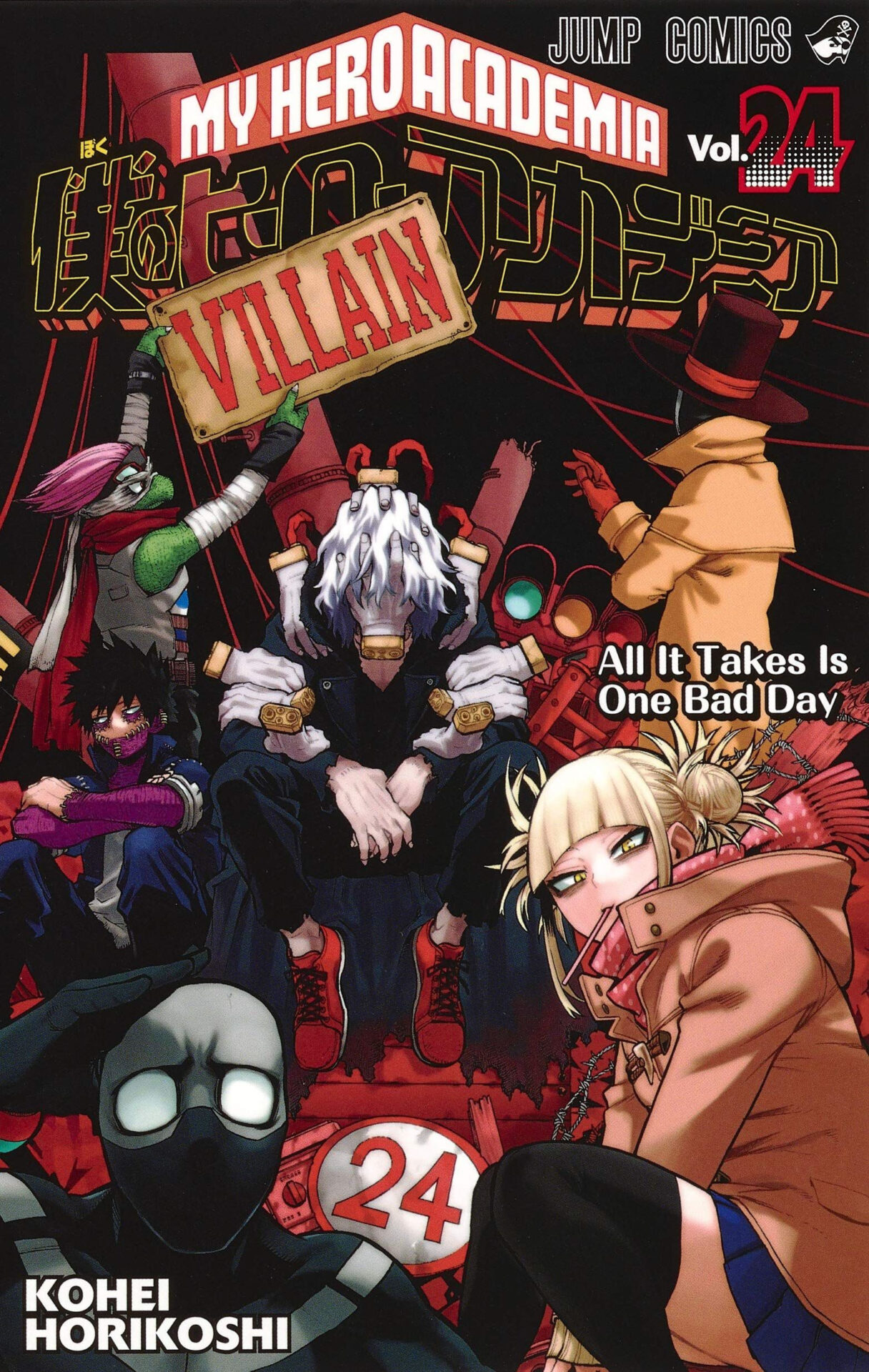 All things considered, one has to wonder if the content Horikoshi cut included further exploration of the exact extent to which All for One was manipulating Aoyama.

What do you make of Horikoshi’s comments? Do you think he and the WSJ editorial staff made the right call in changing his story plans? Let us know your thoughts on social media or in the comments down below!

NEXT: 3 Manga Sequels That Can Teach Hollywood How To Respect The Original Stories