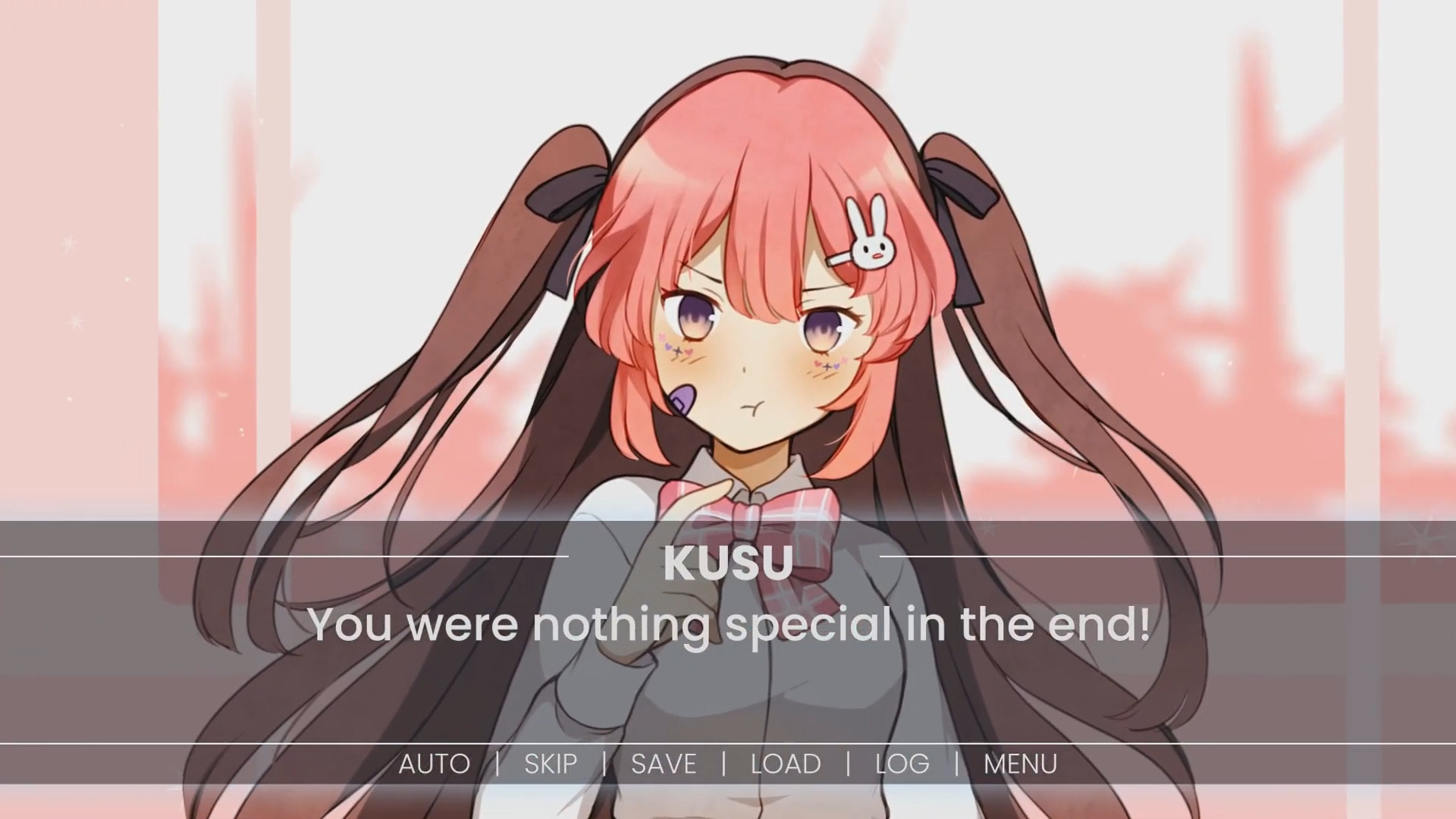 A popular form of merchandise among fans of Japanese- and Japanese-derived media, dakimuras are large body pillows which typically feature full-body illustrations of a given character – one of their front and back for each respective side of the pillow.

Though dakimuras typically feature female characters, there is no specific rule for which characters can be depicted on the pillows, with the only limit being a fan’s imagination. 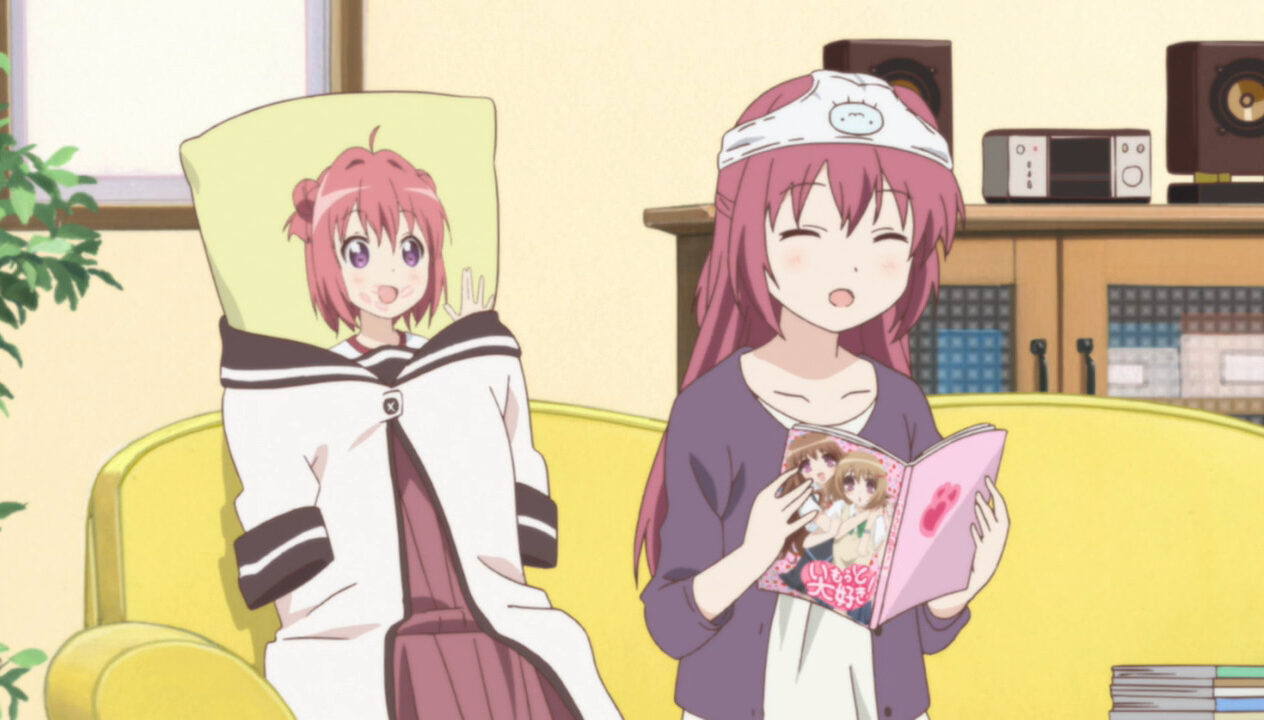 The chain of events that led to the vtuber’s departure began on May 1st when Kusuriko took public issue with CuddlyOctopus, a Western manufacturing circle who specialize in producing custom and original dakimuras, over their offering of a body pillow featuring nude artwork of a teenaged Jinx from League of Legends. 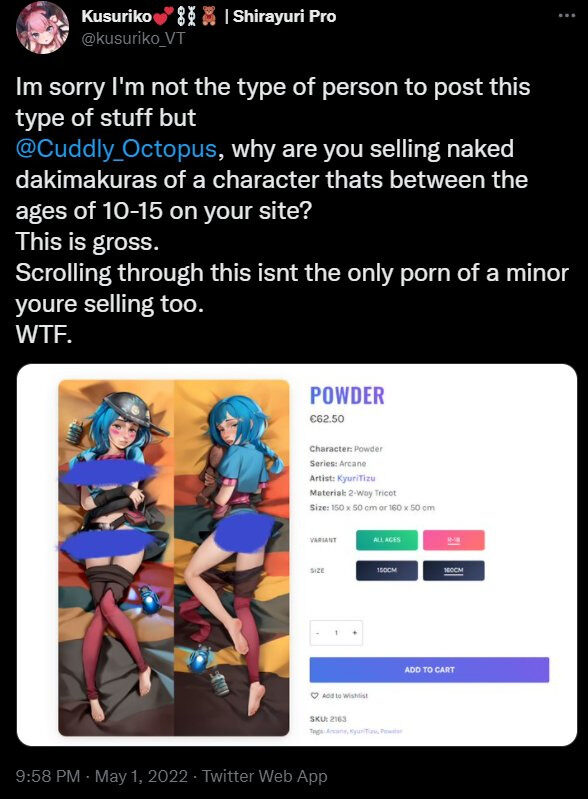 Turning her ire to body pillows of Tales of Symphonia’s Presea Combatir – whose twenty-eight year old body ages slowly and thus physically presents her as roughly twelve – and Is the Order a Rabbit?’s Chino Kafuu – whose age ranges between thirteen and fifteen across the series – Kusuriko continued, “These are just 3 examples out of MANY.”

“I know CuddlyOctopus is a popular collaboration for Dakis, even I collaborated over a year ago, but i wouldn’t have if I had any idea about this,” she said. “This is f–king disgusting.  #ENVtuber’s I really urge you take down your listing.” 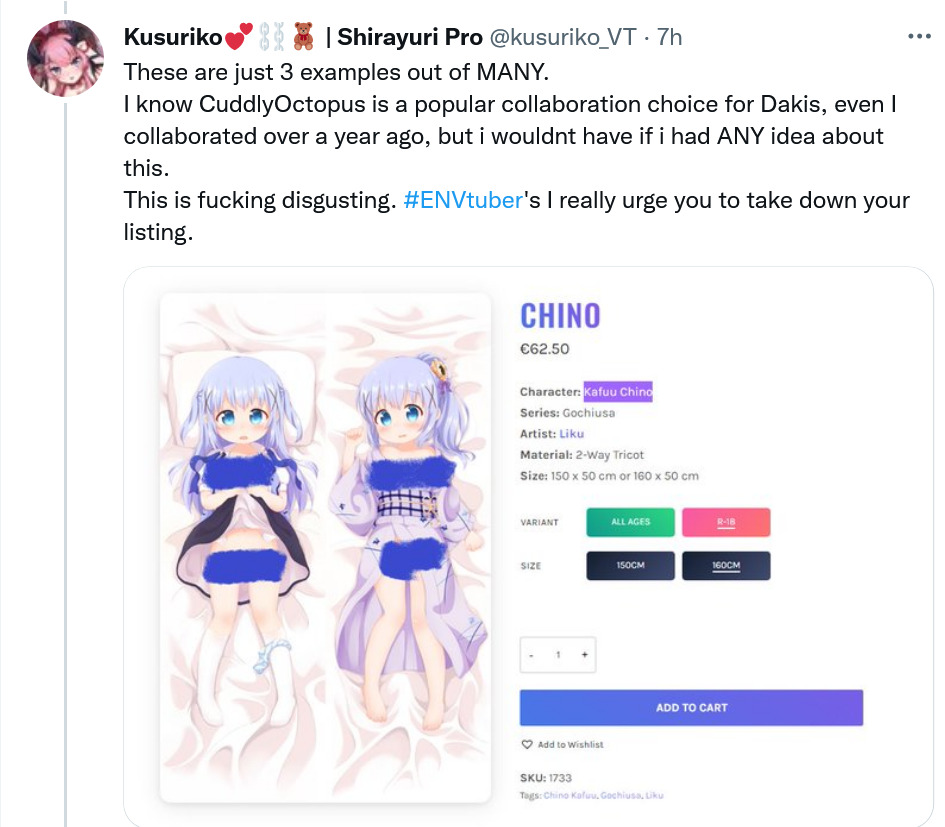 Kusuriko’s outrage soon drew the attention of Twitter user @KawaiiCaroline_, who replied to the vtuber, “They have always sold lolicon dakis on their website and so do most other dakimakura sellers. This is nothing new. You must be new to the hobby.”

In turn, Kusuriko explained, “I never noticed myself this is my fault for poorly researching, however just because it’s ‘always’ happened, doesnt mean its okay and should be excused. Im calling it out now that I have this knowledge.” 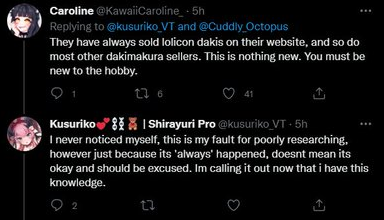 “Meh, it’s a fictional character, so I wouldn’t be too concerned,” said @KawaiiCaroline_. “I personally haven’t bought any of their lewd loli ones but I could understand if someone really liked the character why they would get one.” 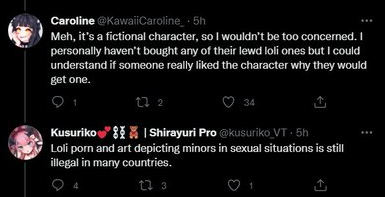 @KawaiiCaroline_ fired back, “That’s you fault if you buy an illegal product.  It’s your responsibility to know if it’s illegal or not, they make that VERY clear.”

“I never bought any of these products,” Kusuriko defended themselves. “It’s also illegal to sell it. I really don’t get how youre justifying this?”

Amidst Kusuriko’s tirade, fellow Twitter user @MixnmatchSafe screenshotted her tweets and alerted her agency, Shirayuri Pro, to her posts.

“Hey @ShirayuriPro – I think you should consider some repercussions towards @kusuriko_VT,” he said. “No one should be allowed to throw at people this kind of words, ESPECIALLY a supposed idol. This is a person representing your company, her tweets are your tweets.”

“And to make clear – I don’t encourage any attacks towards Kusuriko or try to cancel her,” @MixnmatchSafe added. “I just genuinely believe that she has no right to throw this kind of judgements at people and I’m concerned what it says about Shirayuri as a company if they hire people like this.” 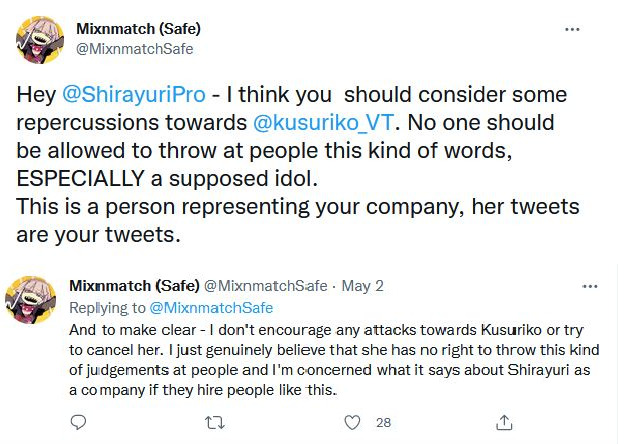 As documented by @VtuberCringe, Kusuriko’s rant was not contained to replies, as the Vtuber took to subtweeting the entirety of the criticism against her.

“You unjustly accused people of being pedophiles and selling CP,” said @VtuberCringe, sharing screenshots of three additional Kusuriko tweets. “You do not get to play the victim.  People can also challenge your ridiculous ideas without calling you names.”   This applies to the rest of you on twitter. 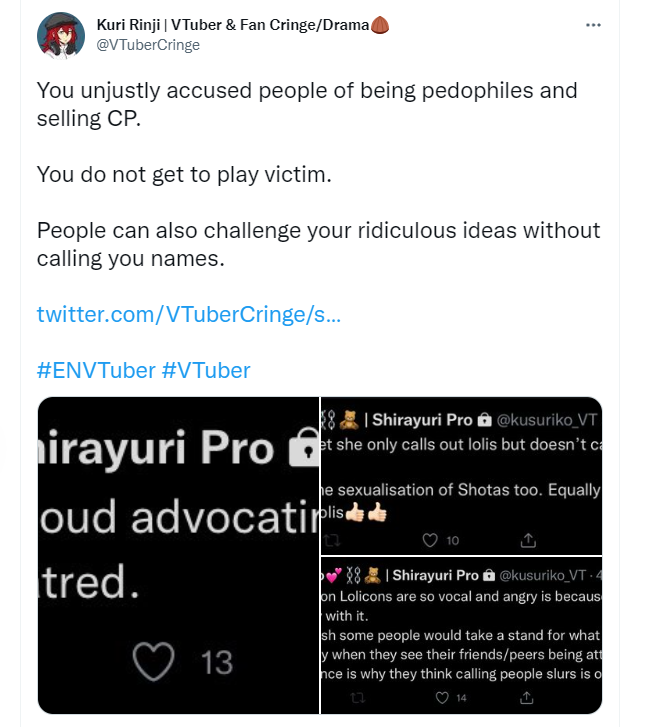 In these screenshots, Kusuriko can be seen declaring, “I wish people were as loud advocating against lolicons as the lolicons as when spreading hatred”:

“‘Hurrdurr I bet she only calls out lolis but doesn’t care about shotas hurrdurr’ No I dislike the sexualisation of Shotas too. Equally as bad as sexualising Lolis”:

And “The reason Lolicons are so vocal and angry is because they know they’ll get away with it. Really wish some people would take a stand for what they believe in, especially when they see their friend/peers being attacked. Your silence is why they think calling people slurs is ok”  – completely missing both that people were angry because she generalized a group of people as pedos and that most of her fellow Vtubers were on the side of fans.

In another set of tweets shared by @VTuberCringe, hilariously captured because “the bot on the official Shiayuri Productions Discord is transmitting all of your tweets”, Kusuirko can be further seen taunting her critics.

Taking the cake, a third tweet red, “If my career involves appeasing Lolis, I don’t want it.”

Eventually, as more and more fans began to push back against Kusuriko continued dumping of toxic waste into their community, the Vtuber deleted all of their tweets and released a statement “regarding the Loli Post.”

“I deleted my tweets regarding the matter,” she began her lengthy statement. “After discussion with my managers I came up with this statement: I stand by my opinions in my initial post. I disagree with the sexualisation of lolis and shotas. Especially for profit. I will not change this opinion, and will not be discussing it further.” 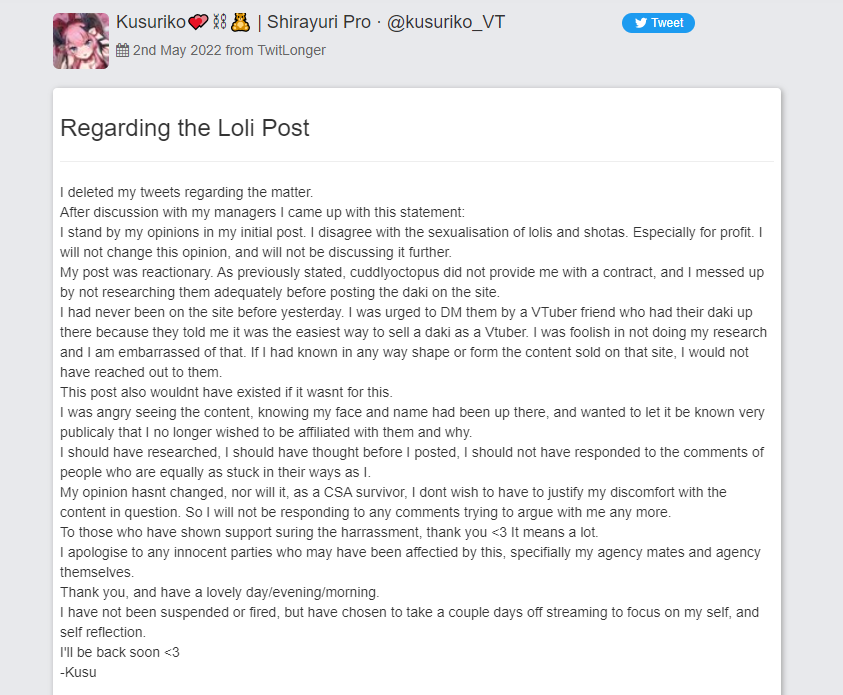 “My post was reactionary,” Kusuriko continued. “As previously stated, cuddlyoctopus did not provide me with a contract, and I messed up by not researching them adequately before posting the daki on the site. I had never been on the site before yesterday. I was urged to DM them by a VTuber friend who had their daki up there because they told me it was the easiest way to sell a daki as a Vtuber. 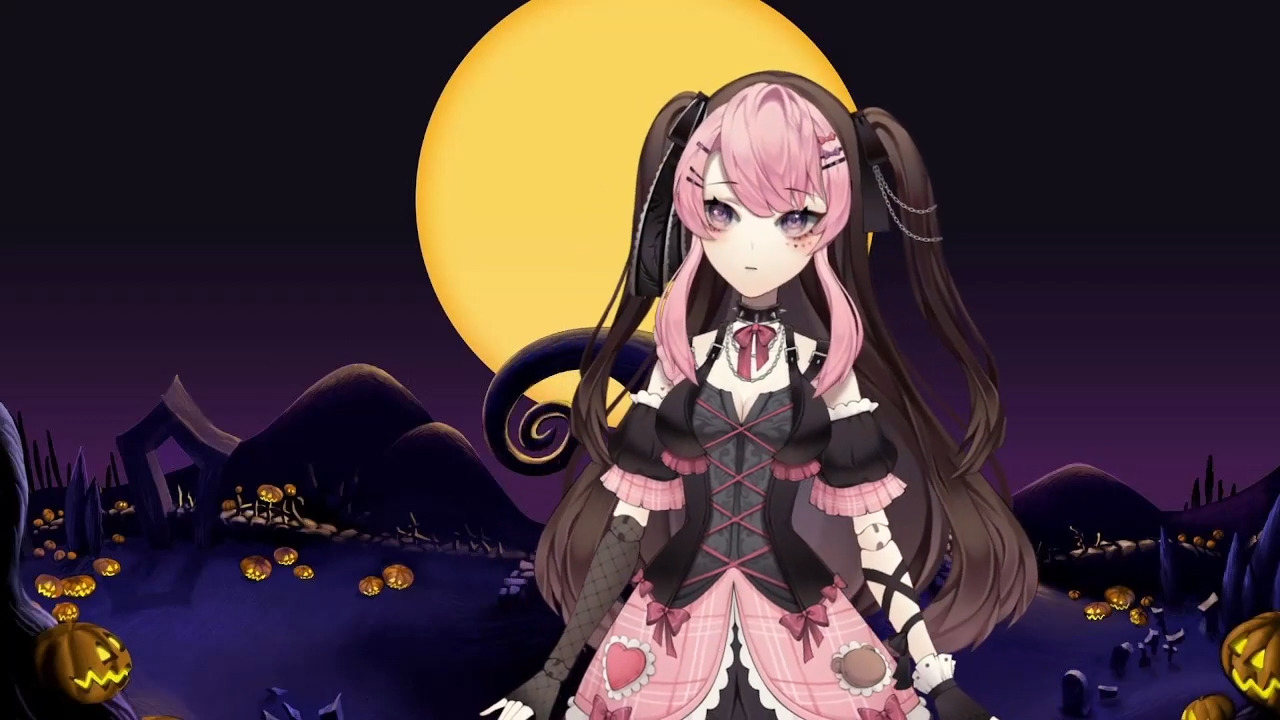 “I was foolish in not doing my research and I am embarrassed of that,” she said. “If I had known in any way shape or form the content sold on that site, I would not have reached out to them.”

“This post also wouldnt have existed if it wasnt for this,” Kusuriko wrote. “I was angry seeing the content, knowing my face and name had been up there, and wanted to let it be known very publicaly that I no longer wished to be affiliated with them and why. I should have researched, I should have thought before I posted, I should not have responded to the comments of people who are equally as stuck in their ways as I.” 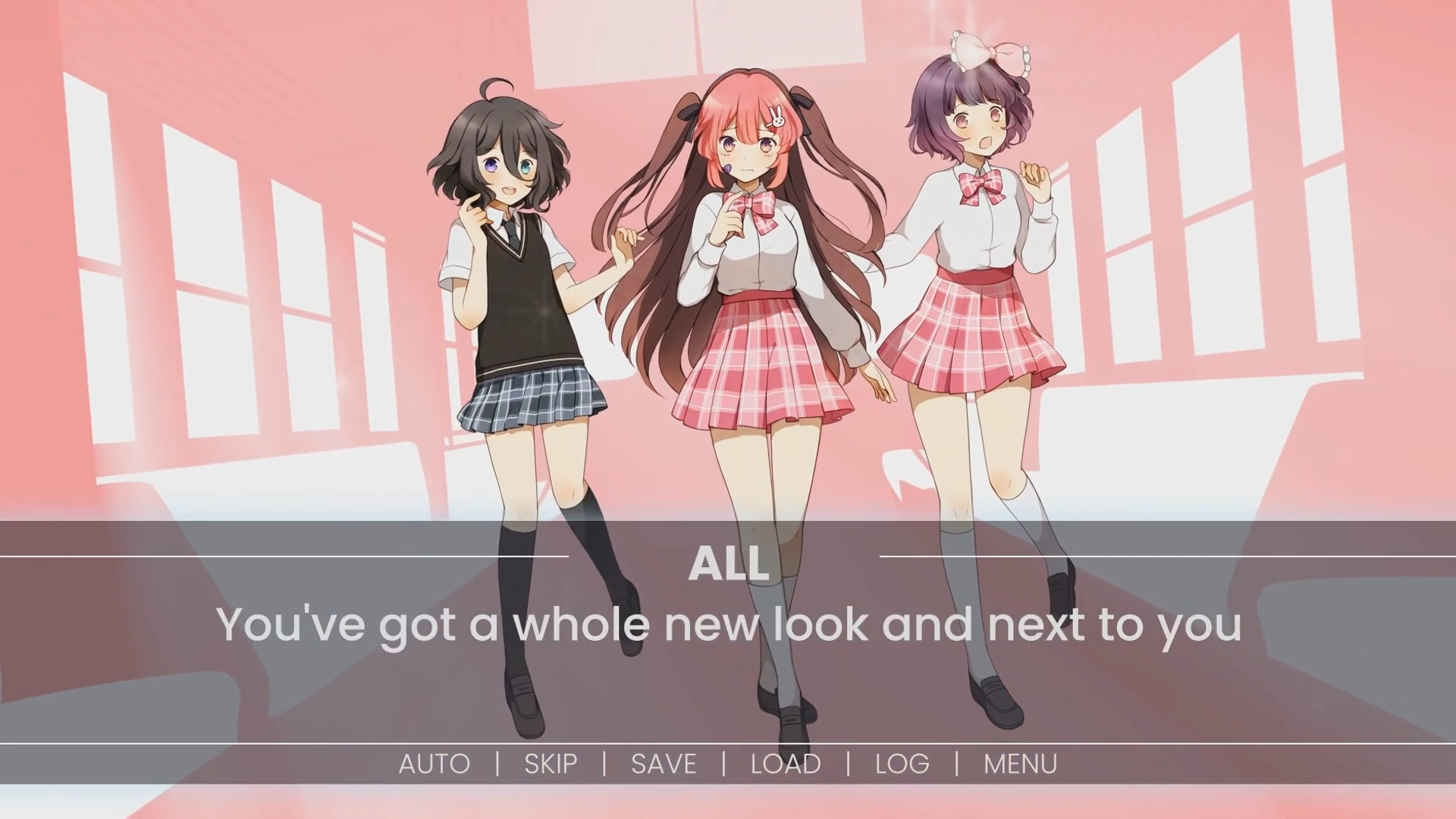 She maintained, “My opinion hasnt changed, nor will it, as a CSA survivor, I dont wish to have to justify my discomfort with the content in question. So I will not be responding to any comments trying to argue with me any more.”

“To those who have shown support suring the harrassment, thank you <3 It means a lot,” Kusuriko said. “I apologise to any innocent parties who may have been affected by this, specifially my agency mates and agency themselves. Thank you, and have a lovely day/evening/morning. I have not been suspended or fired, but have chosen to take a couple days off streaming to focus on my self, and self reflection.  I’ll be back soon <3  -Kusu” 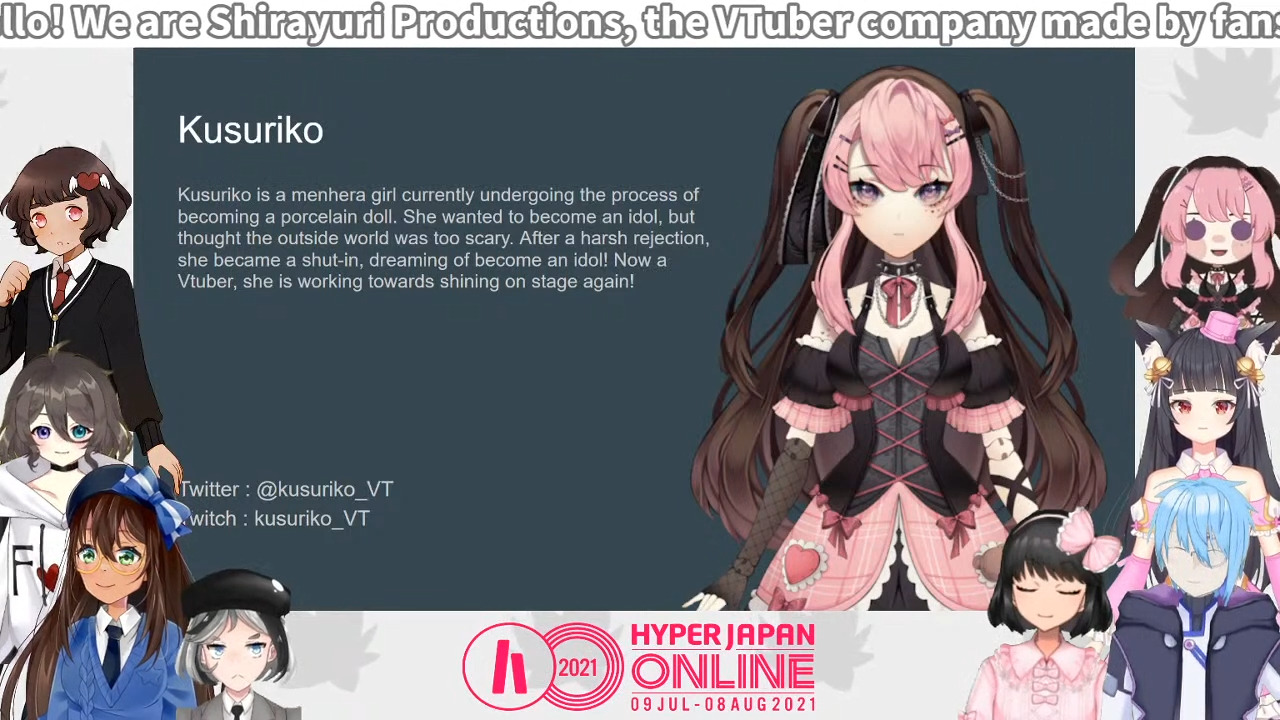 However, Kusuriko’s return never came to be, as on May 3rd, Shirayuri Pro announced her leave from the agency.

“We are aware of the ongoing situation regarding one of the talents of Shirayuri Production,” the company tweeted. “Regardless of the context of the situation, it was inappropriately handled. Steps have been taken to restructure the internal framework to prevent a situation like this from occurring again. We have revised our Code of Conduct to be more clear and concise to avoid any further confusion on what is appropriate per our policy.” 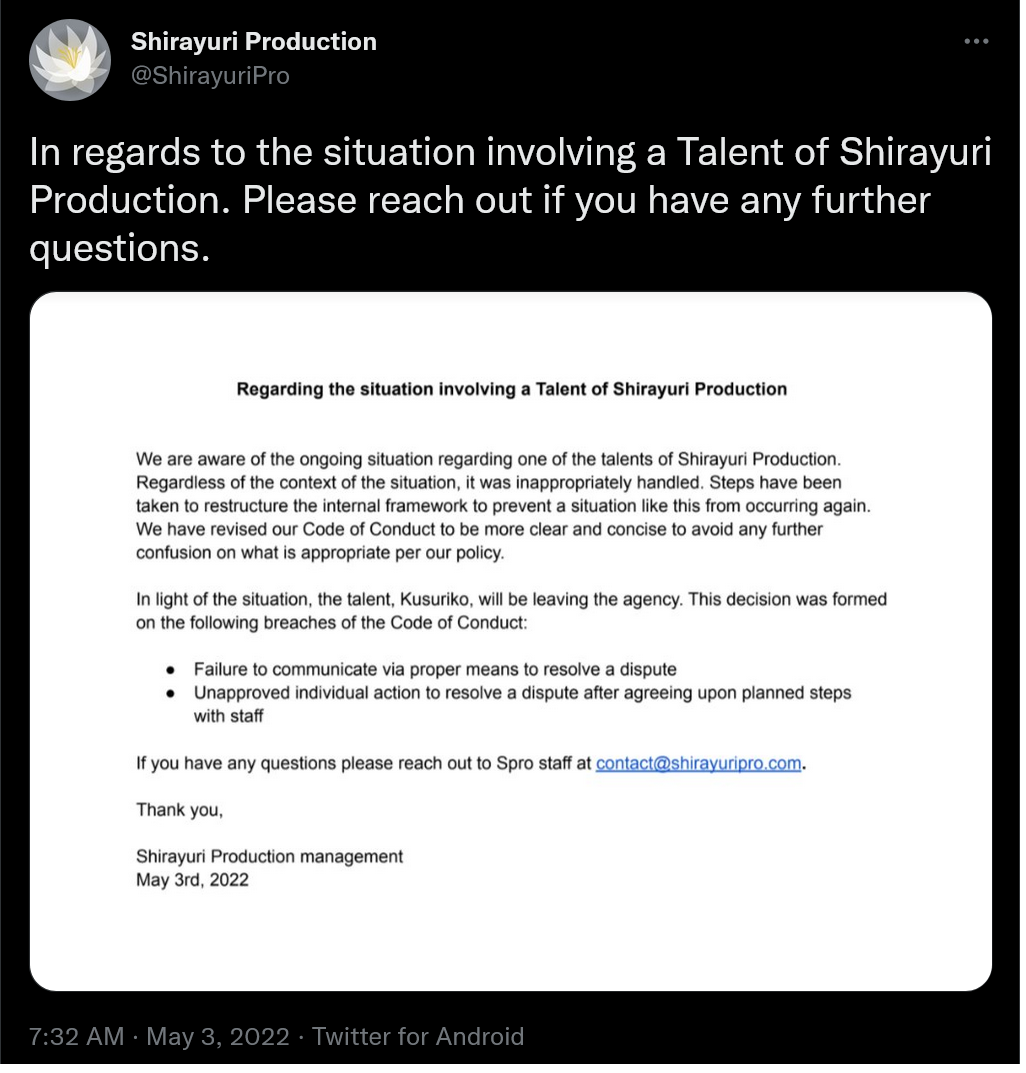 (Does this mean not attacking fans with a business associated account wasn’t already part of the policy?)

The statement concluded, “In light of the situation, the talent Kusuriko, will be leaving the agency. This decision was formed on the following breaches of the Code of Conduct: Failure to communicate via proper means to resolve a dispute” and “Unapproved individual action to resolve a dispute after agreeing upon planned steps with staff.”

In a follow up tweet, Shirayuri Pro clarified, “We believe that talents are free to have their own opinion given that it will not negatively affect anyone else.”

“We ask that individuals refrain from sending our talents unsavory and/or hateful message,” they contiuned. “The statements made by Kusuriko were premature statements without confirmation of management and were made in a timeframe where staff members would have not been available.”

“Kusuriko has left the agency of her own volition due to the breach of Code of Conduct,” the agency concluded. “She was not terminated. We hope this clarifies our intentions and wish her good luck in her future endeavors.” 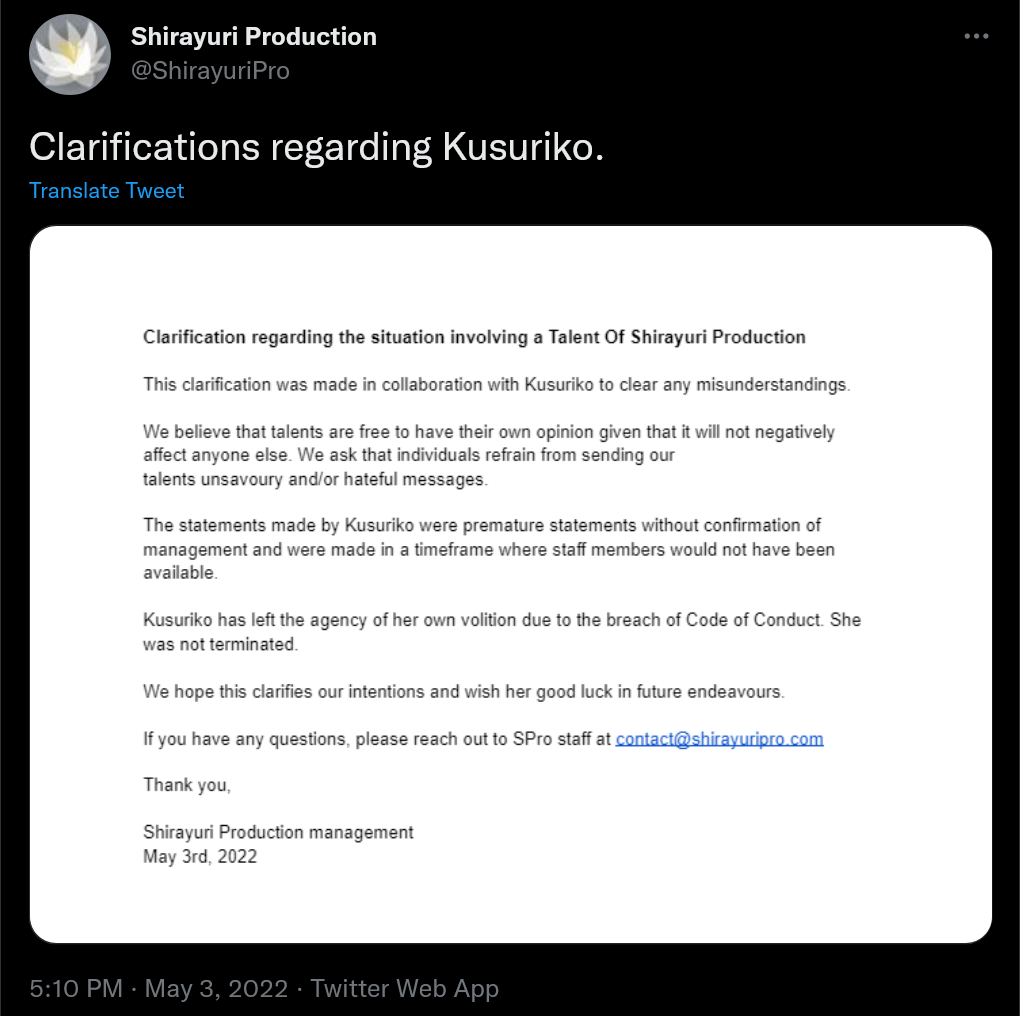 Ultimately, Kusuriko responded to these announcements by announcing that she would be “graduating” – the VTuber term for leaving one’s respective agency.

“Although I wish I could make this a happy celebration of my time as Kusu with you, due to the current circumstances, it seems inappropriate to do so,” she tweeted. “Thank you for your support during this time.  A more in depth explanation is in the comments below <3” 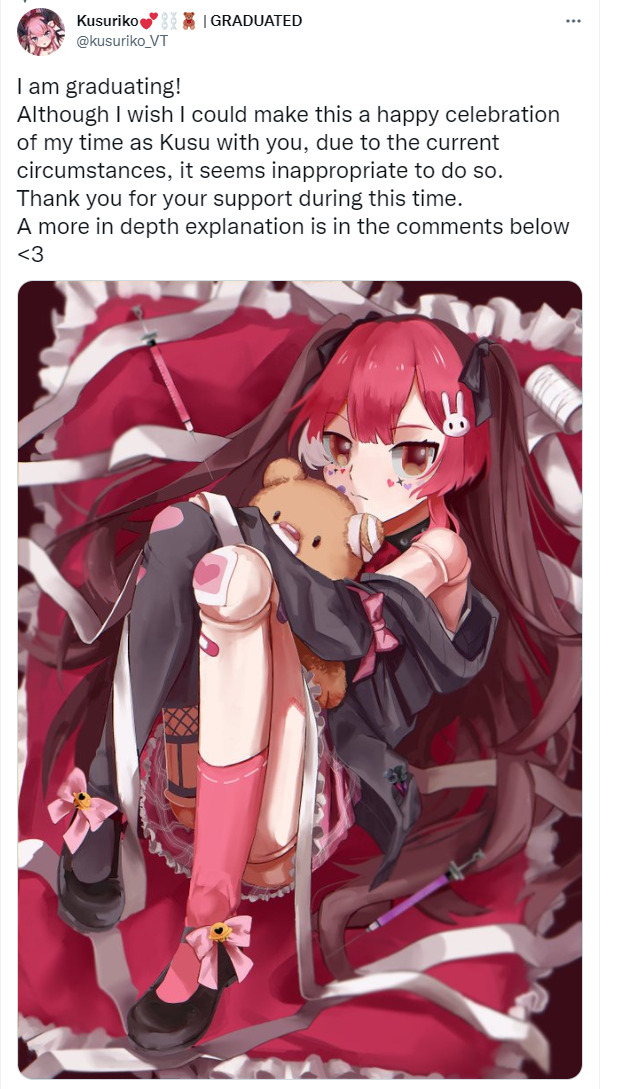 Sharing a graduation letter in a follow-up tweet, Kusuriko further explained, “After nearly 2 years of being Kusuriko, I have made the decision to graduate with this account, name and design.”

“Before reading, please take note, I am not completely leaving, I am starting fresh on a new twitter, and a new twitch, however, due to the onslaught of hate I have recieved lately, I will not be saying where I am heading to, to prevent the further spread of hatred,” she said. “I hope you can understand why I have made this decision. 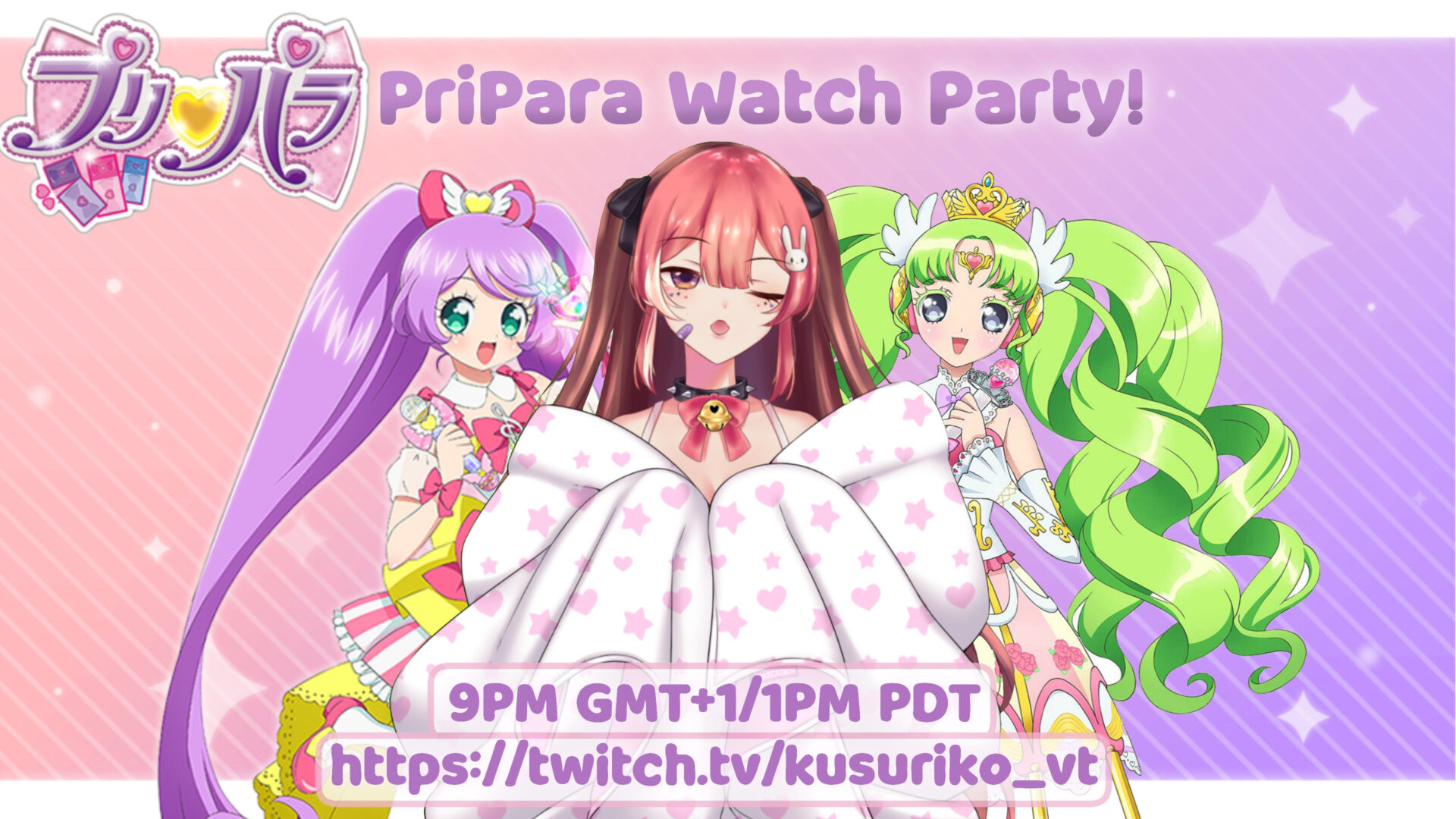 Following a brief explanation of her personal reasons for leaving, as Kusuriko said that she “spent most of the year being emotionally manipulated, abused and bullied”, the VTuber confirmed, “I will no longer be under Shirayuri Production.

“Due to internal conflicts, I had been considering leaving for a little while, and have decided to go forward with this in lieu of this rebrand,” she elaborated. “However, I cannot thank staff, and all the talents at SPro for supporting me through this decision. They are all wonderful individuals, and I could not wish for a better family within this community. They have helped me through the trauma, the highs and the lows of the past year and a half, and I am forever grateful. I hope they will continue to support me as I will them.” 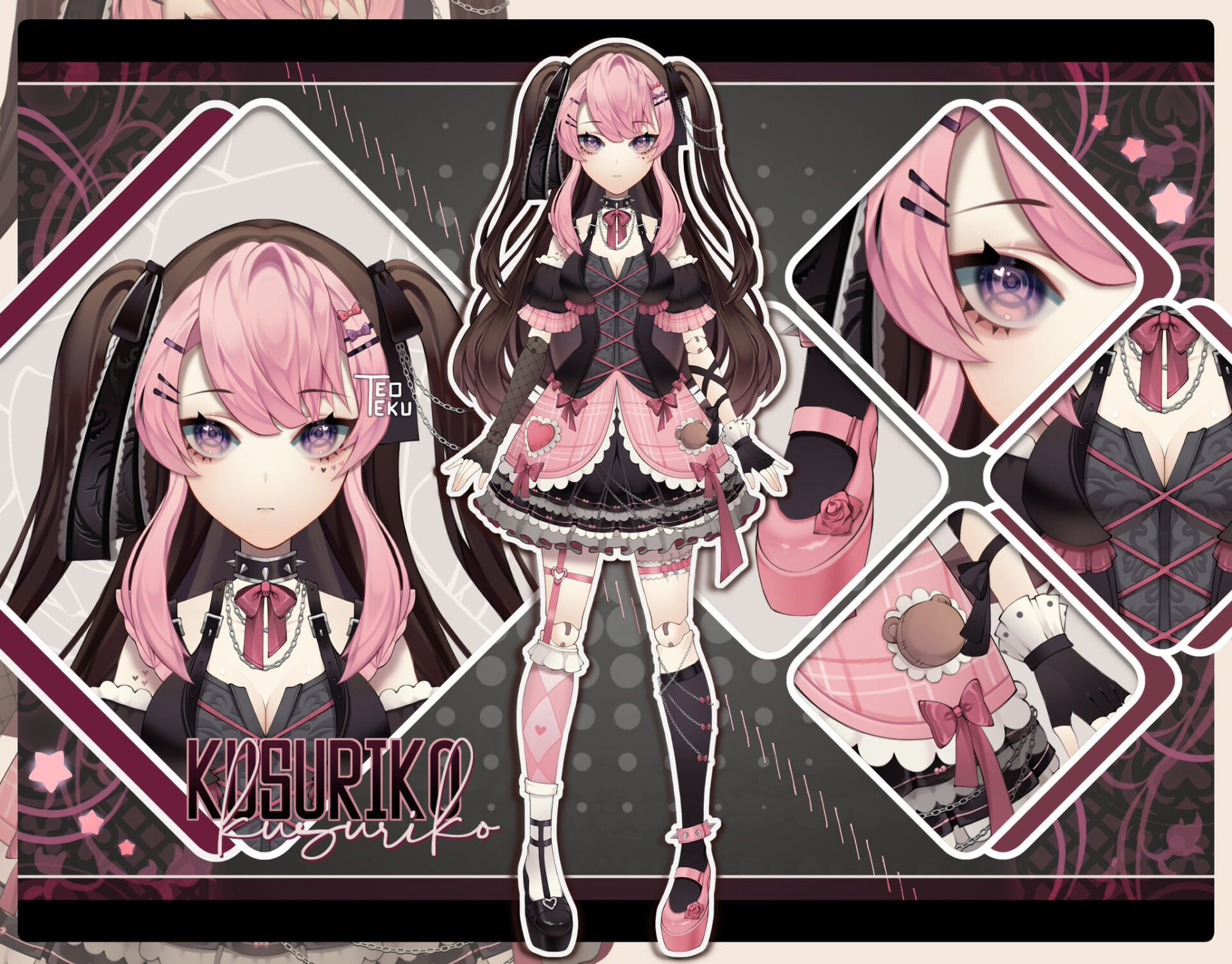 “Thank you,” she said to her friends, family, and followers. “So much. I wouldn’t be where I am without you guys, even though I’m starting fresh, your kindness, your generosity, will forever stay with me. Whether or not you decide to follow me on my journey, or end your journey with me here, I will still be grateful and appreciate you either way.”

Sharing the below screenshots from late March and late April, Kusuriko concluded, “If anyone wishes to question the validity of my plans to graduate: This screenshot proves it’s been in the works for over a month prior to any controversy.”

“I will not be having a graduation stream,” she declared. “I hope you can continue to support me in my future endeavors. Signing off,  -Kusuriko.

Shirayuri gave Kusuriko the golden hands for abusing a company associated account to attack fans. American businesses like Disney and Netflix should be taking notes.

What do you think of make of Kusuriko’s graduation? Do you think more businesses should adopt similar policies to Shiryurai Pro’s? Let us know your thoughts on social media ori n the comments down below!

NEXT: Western VTubers Become Latest Group To Take Offense to Use of Term “Trap”