TheOneRing.net (TORn), not to be confused with TheOneRing.com (TORc), continued to attack The Lord of the Rings fans critical of Amazon Studios upcoming The Rings of Powers series and even questioned their fandom. 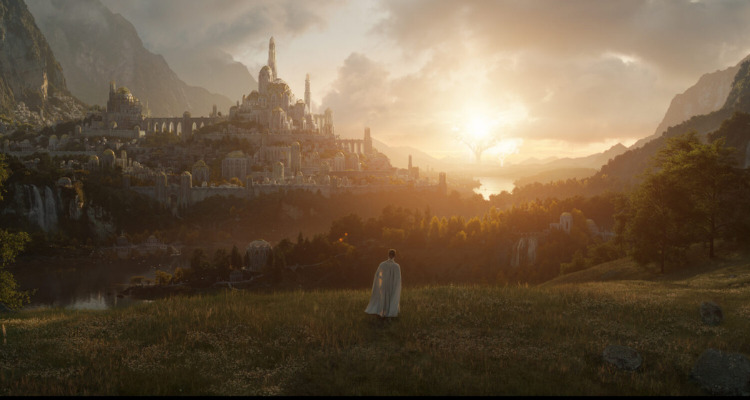 TORn, which previously claimed to be a safe haven for debate for The Lord of the Rings fans, continue to expose just how big of a lie that was as they become the living embodiment of Grima Wormtongue.

The website’s official Twitter account shared a tweet from NBC News’ Kat Tenbarge claiming, “Content creators of all genres are pivoting to cover the Depp v Heard trial, riding the algorithm to millions of views.”

“I spoke to one 15-year-old boy who went from Elden Ring streams to trial coverage. He’s now at 22 million channel views and counting,” she said. 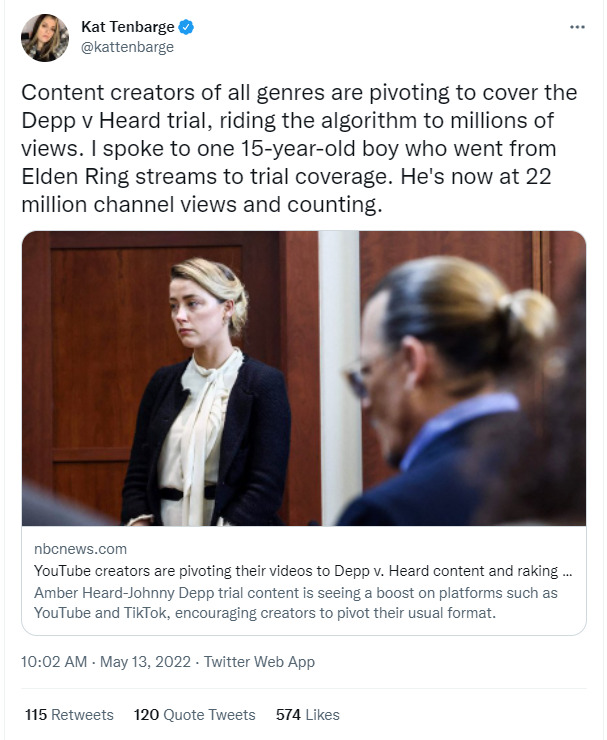 In response to this, TORn wrote on Twitter, “Sharing this for all our fellow LOTR enthusiasts (and media outlets!) who might get discouraged by toxic Tolkien takes on YouTube.”

“It’s the algorithms fault, and does not represent an honest view of our fandom,” TORn added. 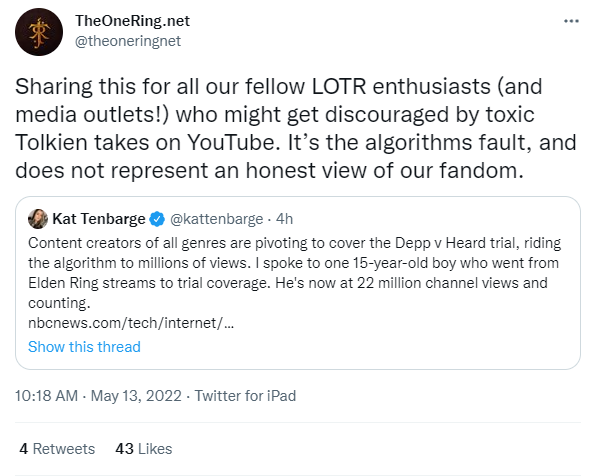 First, the assertion that people criticizing The Rings of Power are “toxic” is a complete and utter lie.

It is not toxic to critique The Rings of Power for not adhering to Tolkien’s work especially when the showrunners admit they don’t even have the licenses for most of the works that cover the time period they claim to be adapting.

Those are legitimate and valid criticisms and to claim they are toxic reflects more on who TORn is, as noted above, the living embodiment of Grima Wormtongue. 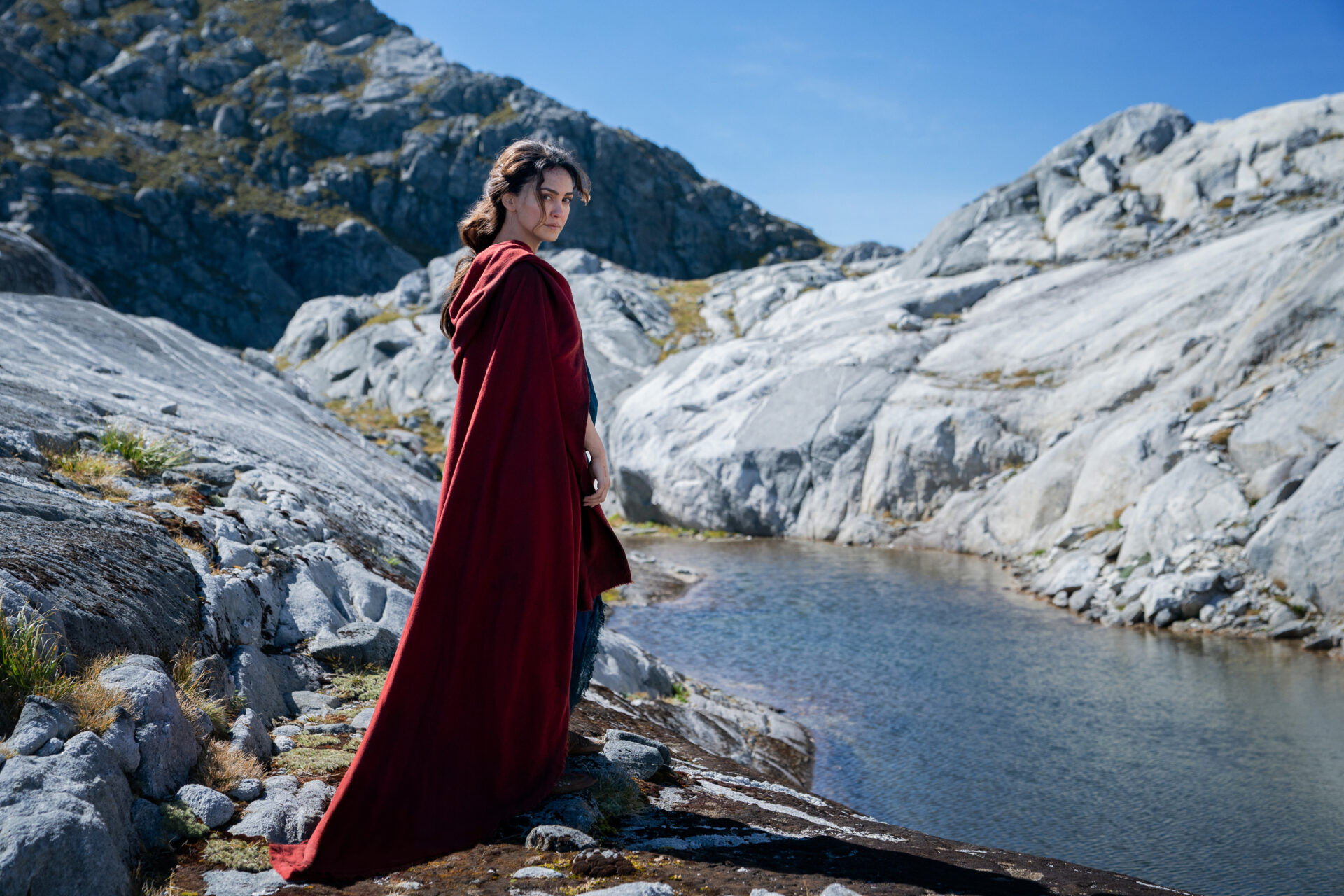 Second, TORn seems to think that individuals cannot be interested in The Lord of the Rings and the ongoing Johnny Depp v. Amber Heard lawsuit at the same time. Shockingly, people can be interested in more than one thing.

TORn is actually an example of this as they recently encouraged their followers to watch the Disney+ series The Quest before they cover the show on their YouTube channel. 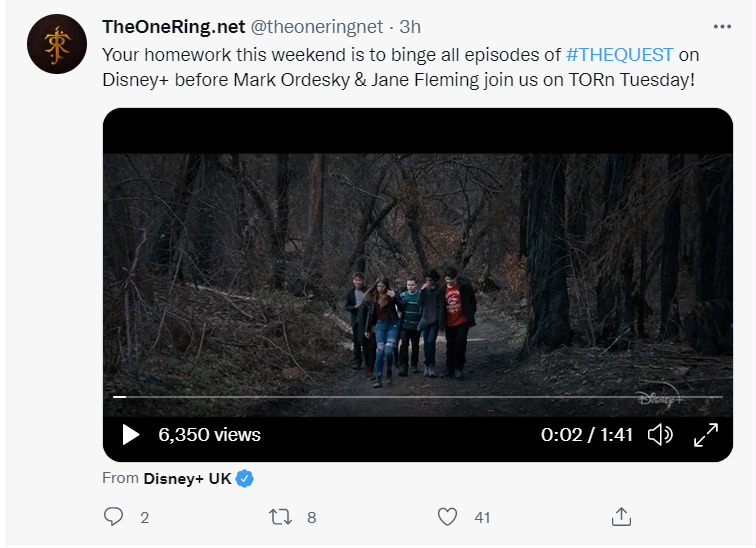 Third, news about The Rings of Power series has slowed down after a flurry of activity in February.

It’s natural for YouTubers and content creators to cover other topics that they might be interested in until more news arrives for The Rings of Power. 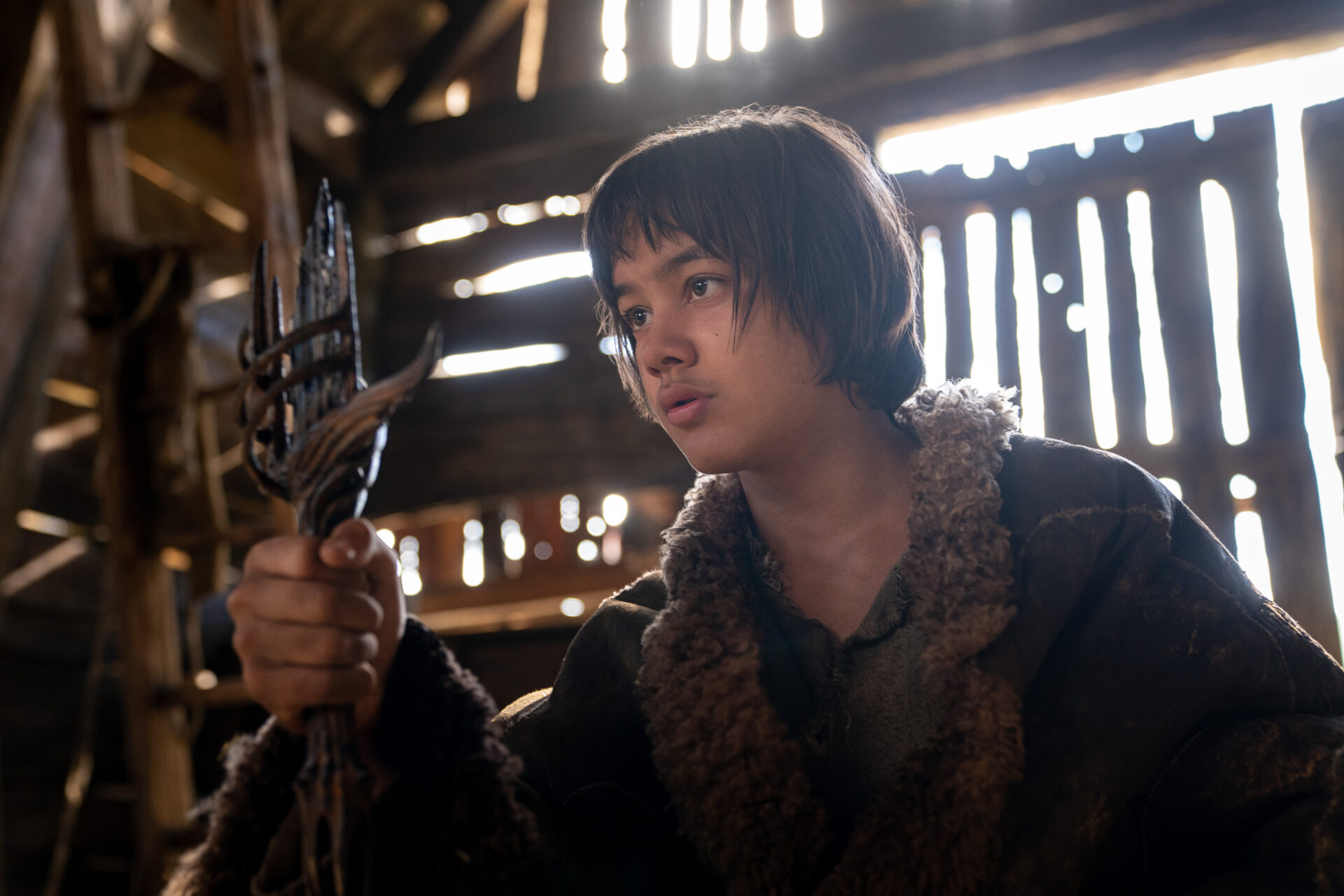 This behavior from TORn is not surprising. The website is as fork-tongued as Grima Wormtongue.

Back in February, they claimed they were a safe haven for debate while at the same time calling fans critical of The Rings of Power as racists.

If there was any doubt the claim they were a safe haven had any shred of validity to it was exposed as a lie again when they decided to call fans “toxic” and are now even implying some fans aren’t really fans because they happen to not be covering The Lord of the Rings every single day. 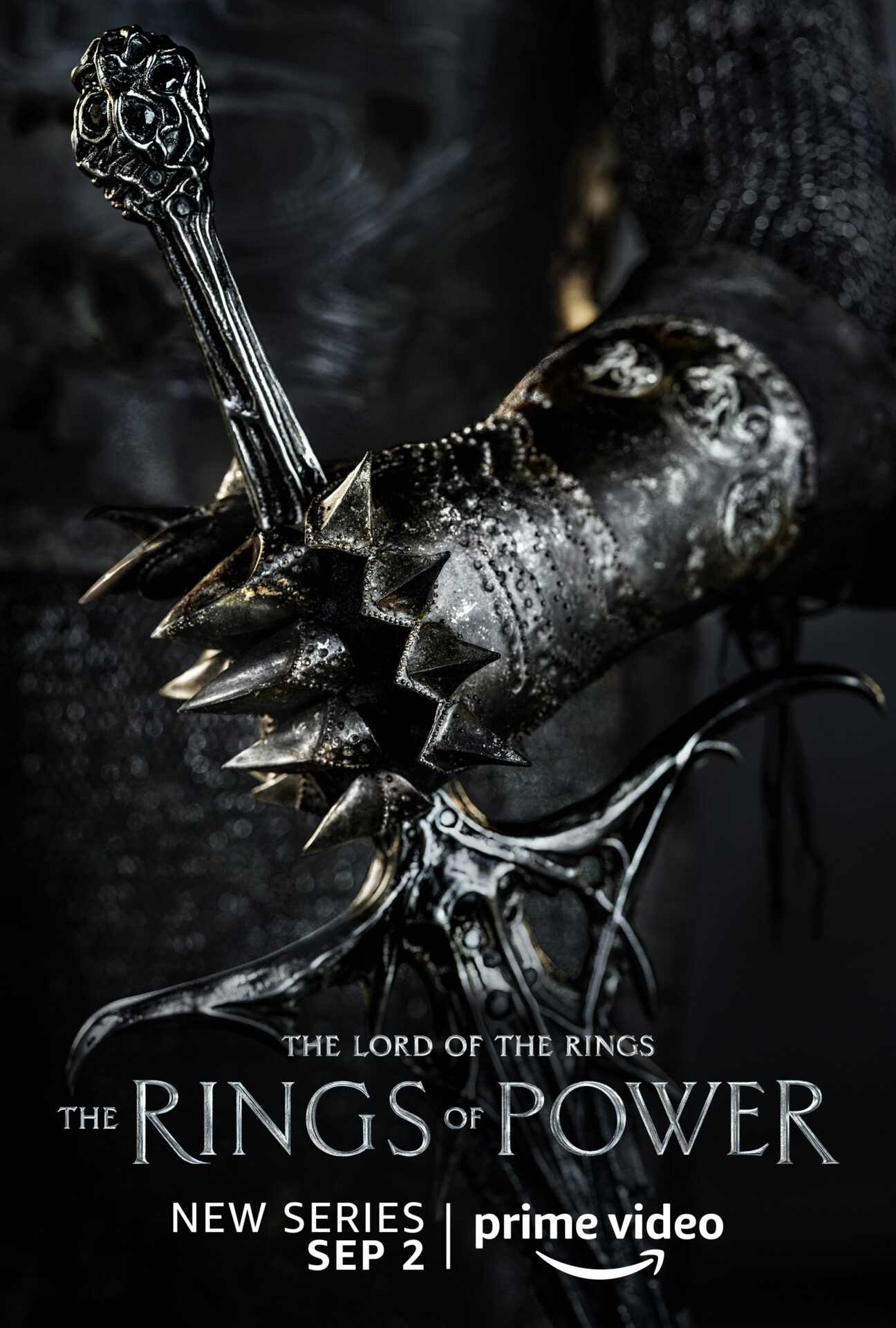 Unsurprisingly, they’ve even attacked J.R.R. Tolkien, the author of The Lord of the Rings describing him as woke and claiming that he would celebrate LGBTQ.

They tweeted back in June 2021, “Tolkien followed the church, and the church celebrates LGBTQ, so I think the surprise is on you.” 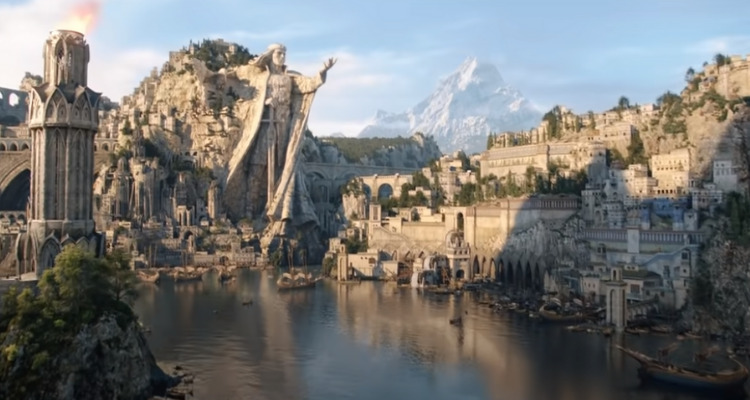 The Catholic Church’s teaching on homosexuality is quite clear. Section 2357 of the Catechism of the Catholic Church states, “Homosexuality refers to relations between men or between women who experience an exclusive or predominant sexual attraction toward persons of the same sex. It has taken a great variety of forms through the centuries and in different cultures.”

This first section concludes, “They close the sexual act to the gift of life. They do not proceed from a genuine affective and sexual complementarity. Under no circumstances can they be approved.”

“They must be accepted with respect, compassion, and sensitivity. Every sign of unjust discrimination in their regard should be avoided. These persons are called to fulfill God’s will in their lives and, if they are Christians, to unite to the sacrifice of the Lord’s Cross the difficulties they may encounter from their condition.”

If there is any celebration of LGBTQ going on from the Church it is because they are mastering themselves through the virtue of chastity and approaching Christian perfection.

YouTuber European Lore also reacted to TORn critiquing them, noting that many fans have expressed their disgust with The Rings of Power by downvoting the official teaser trailer.

The YouTuber stated, “The last time I checked, it was, I think, yesterday, the teaser trailer for The Rings of Power, because of course they are talking about The Rings of Power, at YouTube, the official Prime Video channel it was still ratioed to hell.”

“And they are not very successful at hiding it. Because people who have the Google extension to actually see the downvotes. They see. The upvote versus downvote ratio is crazy. And you can see it all over the internet and people are absolutely against what Amazon is doing based on what they have already shown,” he added.

What do you make of TORn continuing to attack fans?

NEXT: Prime Video Releases Two New Images For The Lord Of The Rings: The Rings Of Power As Show Continues To Be Mired In Controversy