The Nebula Awards was once considered the second most prestigious award for science fiction writers. In recent years, the awards have become known for controversies over identity politics. Many fans perceive award-winners to be chosen on the basis of race or gender rather than the contents of their work.

Lackey’s banning comes just a year after she won SFWA’s Grand Master lifetime achievement award, becoming only the 57th person to be given such a title from the organization.

Lackey, 72 years old, has published more than 140 books and the organization praised her contributions to science fiction and fantasy.

SFWA President Jeffe Kennedy said this of her career, “From the time I read my first Mercedes Lackey book as a young woman, her stories have illuminated my imagination and brought joy to my life. With multi-layered fantasy worlds, canny magical systems, and characters who step off the page as living, breathing people, Lackey’s books have made an enormous impact on the genre.”

“She gave me warrior women I could believe in, magic-wielding queer heroes, and characters who suffered, then overcame their physical and emotional traumas. Lackey continues to have a lasting influence on my own work and I’m beyond thrilled to see her honored as SFWA’s newest Grand Master,” Kennedy added. 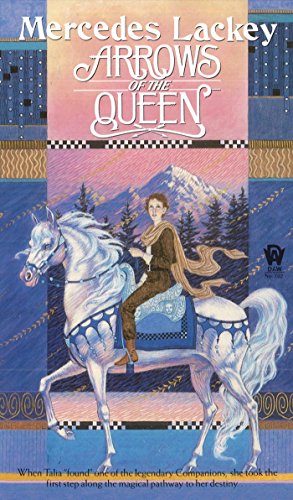 SFWA stated, “We learned yesterday that while participating in the ‘Romancing Sci-Fi & Fantasy’ panel, Mercedes used a racial slur.”

The organization’s Board of Directors continued, “First, we apo0logize to our attendees and the other panelists who were subjected to that slur. We’ve disabled access to the panel to avoid any additional harm being caused.” 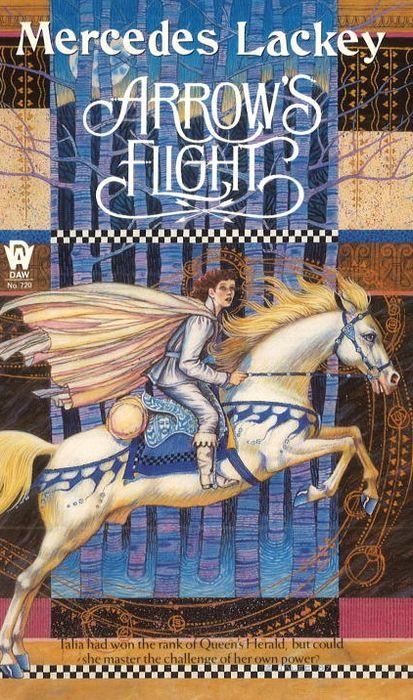 From there they stated “Second, we are immediately removing Mercedes Lackey from the conference and the additional panels she was scheduled for, in accordance with SFWA’s Moderation Policy.”

“The use of a racial slur violates the instruction to ‘Respect all cultures and communities. Do not make derogatory or offensive statements even as a joke.’ That applies to everyone in a SFWA space, at all levels of their career,” the Board of Directors explained. 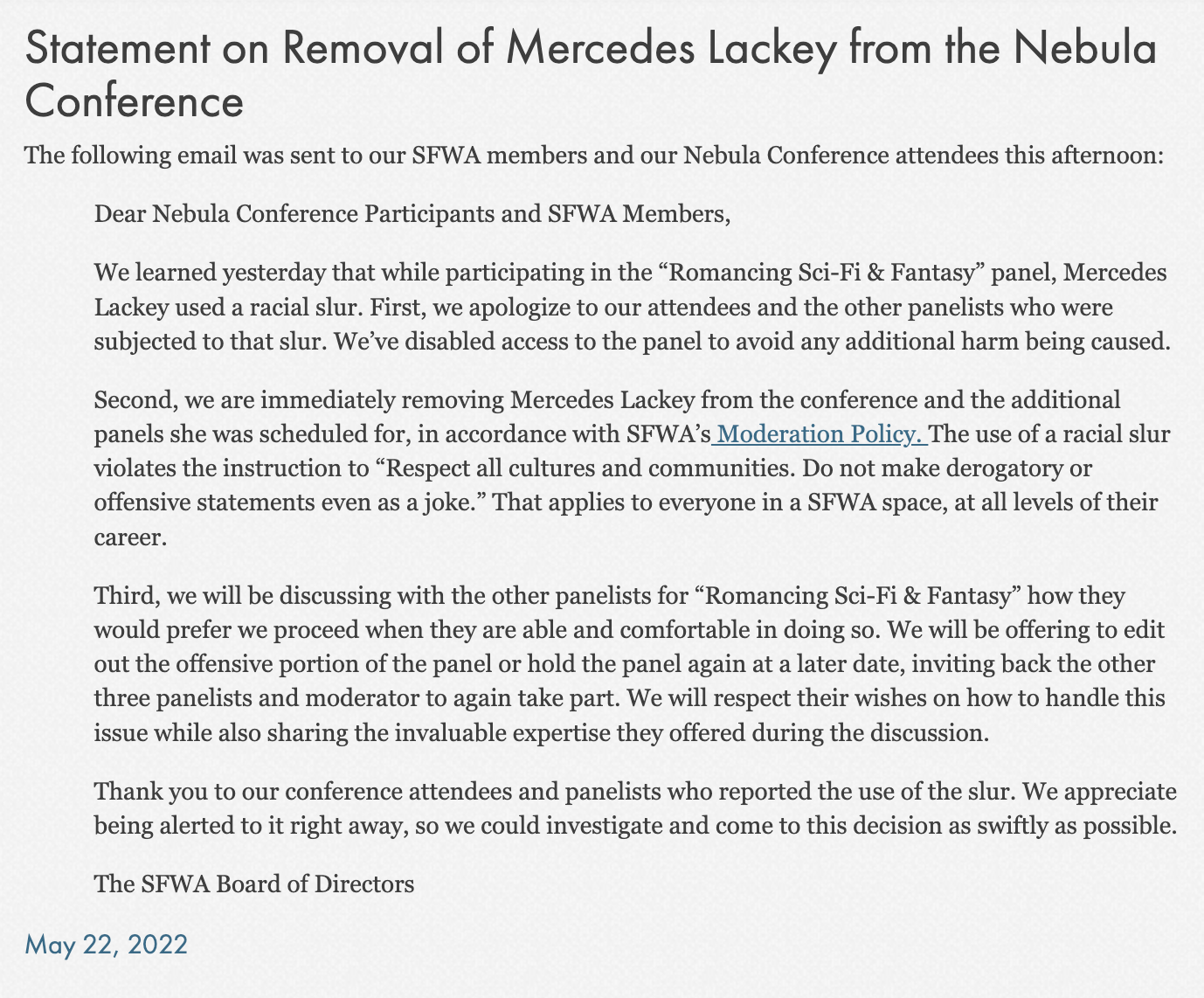 This year’s Nebula Awards Conference already has soured many science fiction writers and fans, as the organization continued its COVID-19 lockdown policies of having the conference be online only.

SFWA charged $150 for tickets to what some science fiction fans are calling “a few zoom calls and a discord chat.”

Lackey was slated as one of the major draws of the conference, speaking on several panels. “Romancing Sci-Fi and Fantasy” became embroiled in controversy by her statements, even though Lackey dedicates much of her social media presence to promoting minorities and LGBTQIA+ causes.

Back in 2021, she tweeted, “Before all else: trans women are women, and trans men are men. This is something I fiercely believe, and will always support.”

“I have made awkward statement that have caused pain or distress. My desire is, and has always been, to support the trans community and be the best ally I can. I regret that I communicated poorly and fell short of the mark,” Lackey continued.

The novelist added, “I’m affirming here that I do, and always will, support trans rights and trans people. An individual’s pronouns are every bit as valid—and far more important—than the dictates of copy-editors in the commercial publishing industry.” 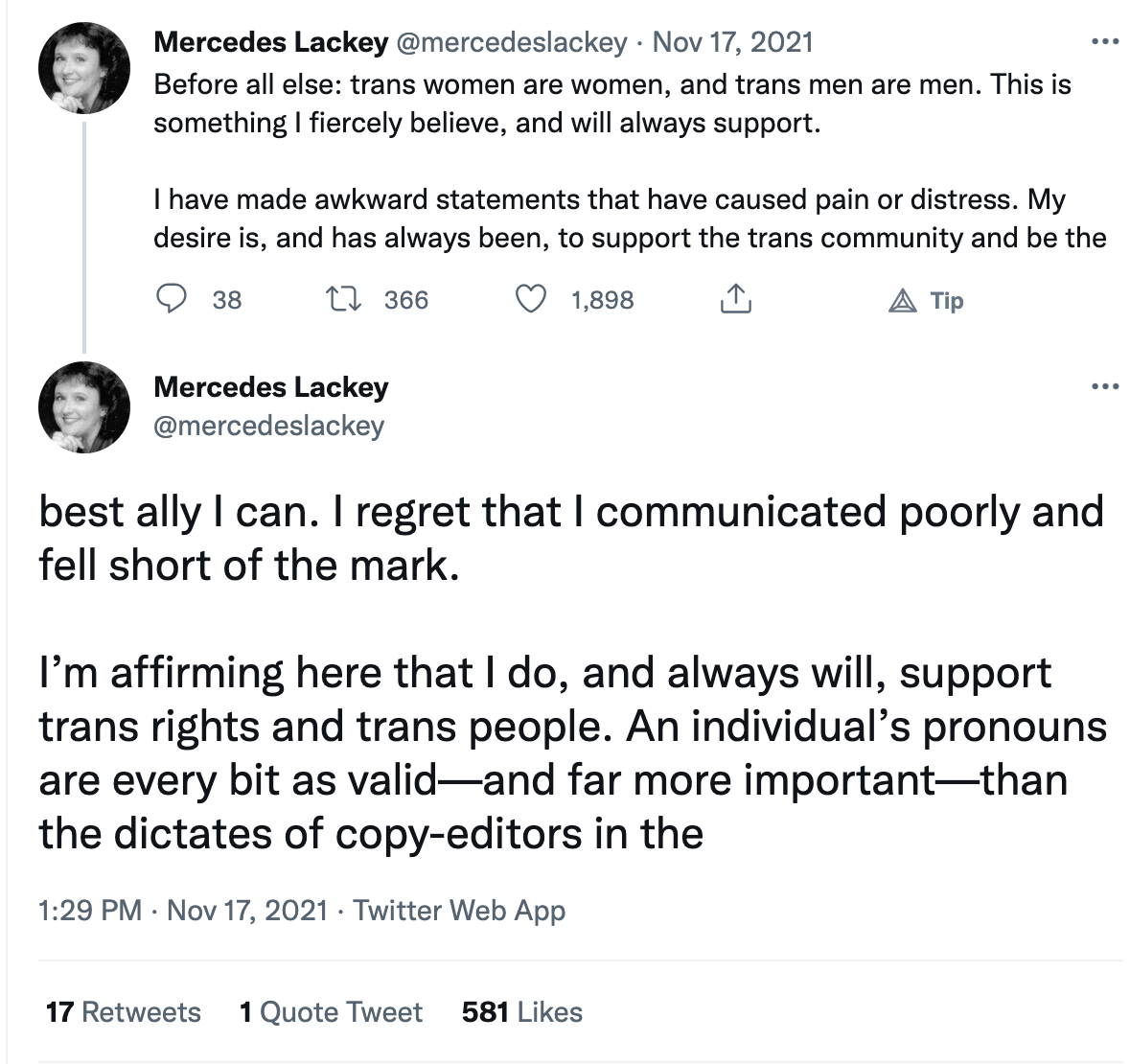 Lackey allegedly used the term “colored” during the panel several times. Multiple science fiction and fantasy writers have taken to Twitter to condemn her, including author Jen Brown who was on the panel.

Brown tweeted, “During the panel, Samuel R. Delany’s trailblazing work was referenced. He was also referred to as ‘colored.'” 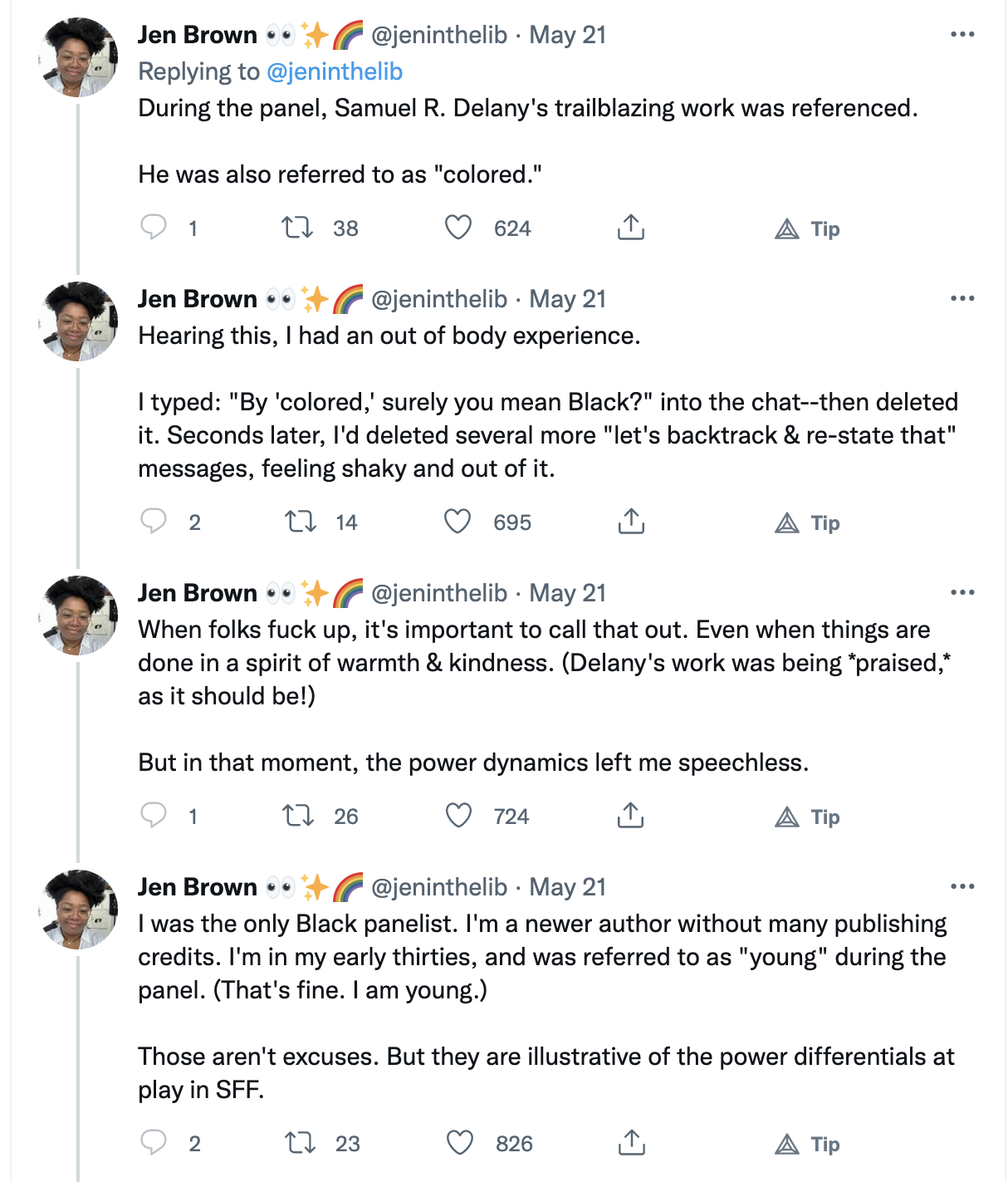 Fans of Lackey defended the author saying she meant to say “person of color” instead of “colored person,” a distinction that seems minor.

Lackey’s husband Larry Dixon also confirmed she used the word “colored.” He wrote on Twitter, “Additionally, an official statement was shotgunned out from ‘The SFWA Boardmembers’ apparently to everyone on SFWA’s mailing list that Mercedes Lackey used ‘a racial slur.’ She said ‘colored’ during a multiracial panel. The same word the NAACP uses.” 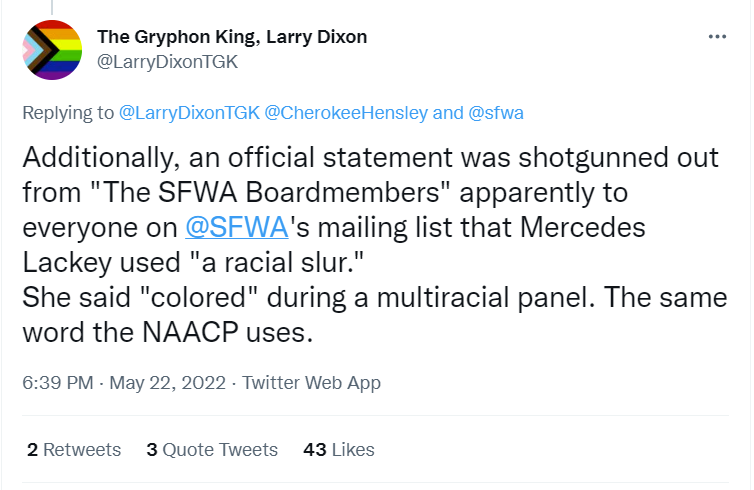 In a 16-tweet thread, Dixon would detail that Lackey is “shivering, crying uncontrollably.” He tweeted, “She is horrified by this. She is shivering, crying uncontrollably. Since she was a teen she fought for civil right, gay rights, trans rights. Her work is about inclusivity & consideration for others. She was just done wrong in a devastating way.” 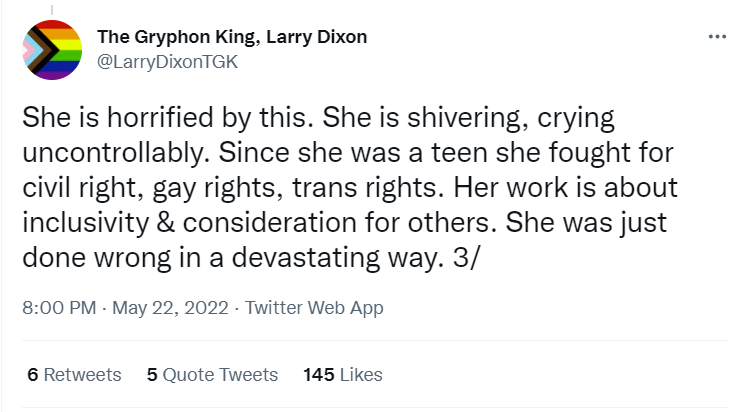 In another tweet he wrote that those attacking Lackey are committing evil. “Obviously the wording was a mistake but the reasons don’t matter. The person doesn’t matter. What matters to the mob is that there’s someone to savage. In righteously doing so, you’re doing evil. Back off on the teaching & fingershaking.” 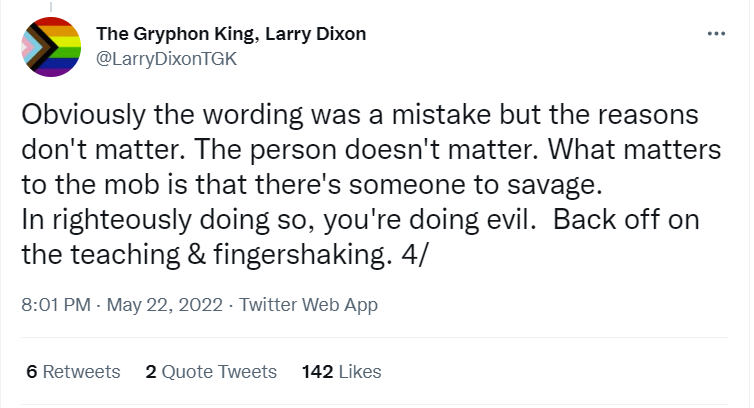 Delaney himself seems to have no problem with Lackey’s comments, posting to Facebook, “‘Colored ladies,’ was what my aunts Bessie and Sadie referred to themselves as, and I favored ‘black’ with a small B, because of my experiences in ’68, with the activists who changed the country from ‘Negro’ to Dr. Du Bois’s preferred term).”

He continued, “Among colored or black or Negro folks he had no problem—since scientifically there is no such thing as race, the terms are all social constructs. With all due respect for anyone over 60, there are no ‘bad words;’ it depends alone on the vernacular you were brought up with. (Perspective usage and grammar stars out as a lost cause.)”

“At years my junior, and a native of a city, I am very fond of, Mercedes Lackey has my permission to speak of me in any way she chooses. ‘Person of color’ is just awkward (so I wouldn’t use it myself); my paternal grandfather was born a slave, and there were white mongrels and Native Americans scattered throughout; ‘colored’ has no negative connotations among any speakers black or white in my family and never had,” he concluded. 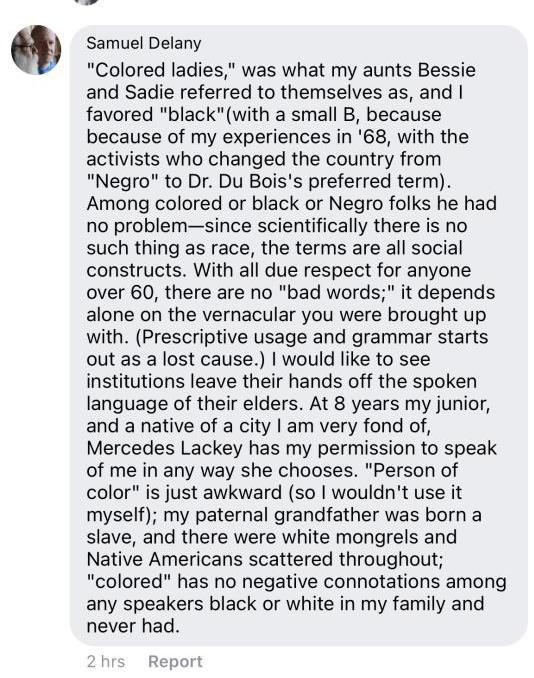 Even though the person referred to isn’t offended by her statement, dozens of authors and fans continue to post stating Lackey caused immeasurable harm by referring to Delaney as a “colored” author.

Anne Stagg wrote, “You don’t get to decide what is a harmful slur to a marginalized community, if you aren’t a part of that community (white folks defending Mercedes Lackey, I’m looking right at you).”

She added, “When Black people tell you a word is harmful & hurtful stop saying it.”

Twitter user MarySueSays wrote, “Mercedes Lackey is super reliant on the Magical Native trope and other racist nonsense, so I’m neither surprised nor hurt by finding out she’s still racist in 2022.”

“But if you are white, surprised and hurt? That is a goddamn YOU problem,” the Twitter user asserted. “And if you aren’t hurt? YOU PROBLEM.”

What do you make of SFWA banning Mercedes Lackey for saying “colored person” instead of “person of color”? Let us know your thoughts in the comments section down below or on social media.