In the face of the massive backlash towards Seven Seas’ genderswapping the cross-dressing and feminine male Hiura into a transgender girl in their English-language release of I Think I Turned My Childhood Friend into a Girl, a Western localizer has admitted that this blatant changing of mangaka Azusa Banjo’s original work was planned from the start, asserting that the respective translator consulted “with trans people” to ensure the change was “as accurate” to their experiences as possible. 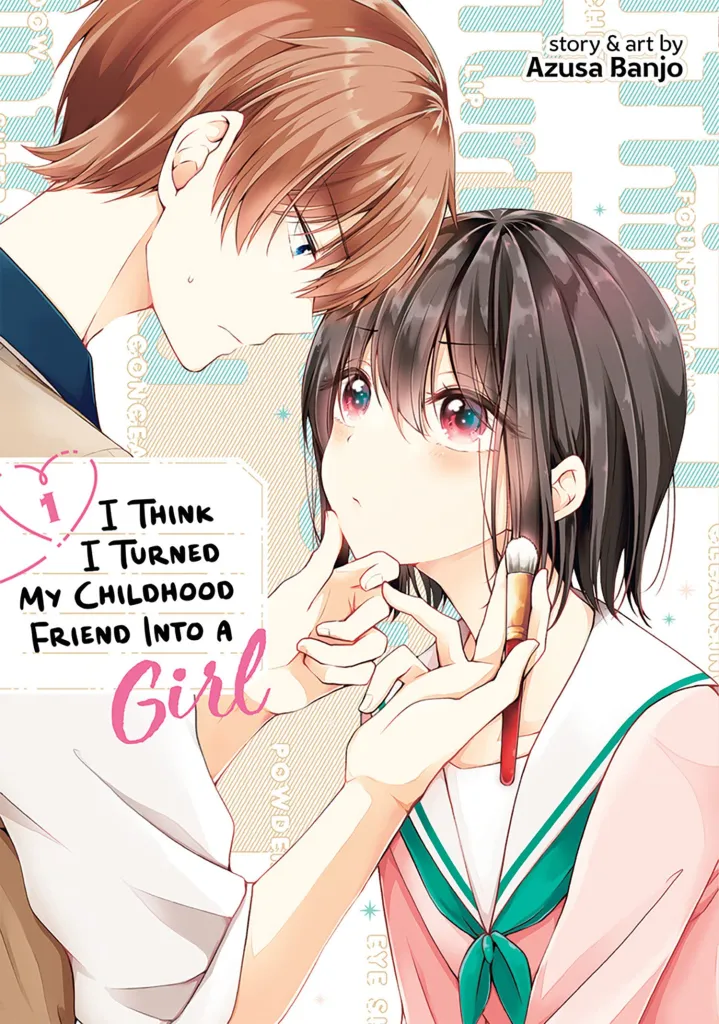 Source: I Think I Turned My Childhood Friend Into a Girl (2022), Seven Seas Entertainment. Volume 1 Cover Art by Azusa Banjo.

This suspected intention was confirmed on June 8th when Western localizer Katrina Leonoudakis, whose credits include the Higurashi: When They Cry GOU and SOTSU anime series as well as the Atlus video game Persona 5 Royal, sought to speak out against the backlash to Seven Seas’ mistranslation.

Taking to Twitter, Leonoudakis declared, “I know the translator and they’ve done their homework on this series, reading future volumes, consulting with trans people, and working hard to make sure it’s as accurate as possible.”

“Shame on those listening to one rando and trashing it,” she added, referring to manga fan translator Ethylene Scans, who first brought Seven Seas’ shoddy work to light. ” I fully support this translator.” 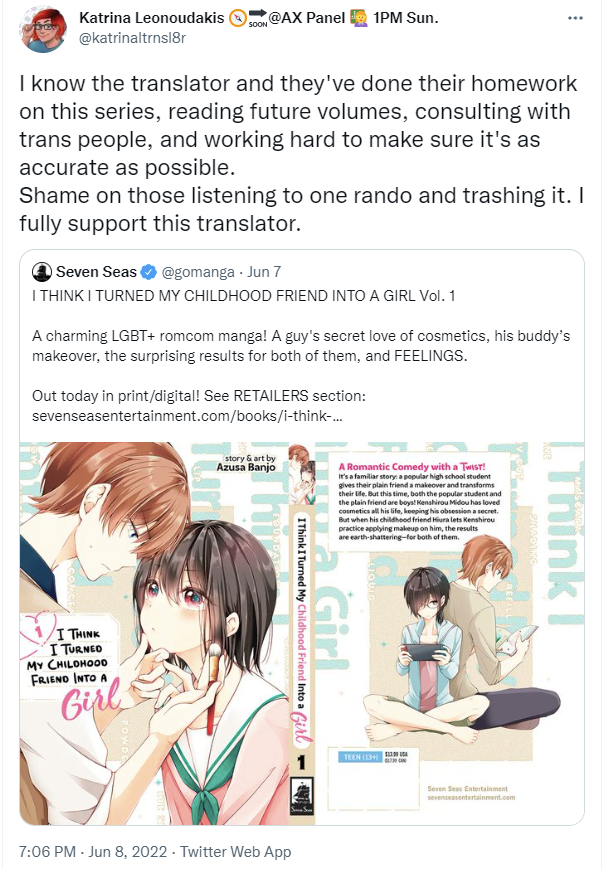 “I know tweeting this is going to draw the Twitter mob towards me, but that’s fine,” she continued, before continuing to insult Ethylene Scans. “They can point to the one scan guy’s ‘analysis’ of the first volume all they want. It’s clearly the same ‘anti-localization’ stuff as always, just co-opted differently.”

She then attempted to head off any criticism of her claims by deflecting, “And I know not offering my own full essay about why it’s good, and not giving examples in context, is going to stir shit up, too.”

“But I know that even if I did, it wouldn’t change anyone’s minds,” she said. “That’s how stuff on the Bird Site works.”

Leonoudakis “And I know it’s just a very small subset of ‘fans’ who are very loud, and that the rest of the community isn’t like this. But it still disappoints me that so much of the community doesn’t realize how hard we work to make sure everything is handled with care. We love what we do.” 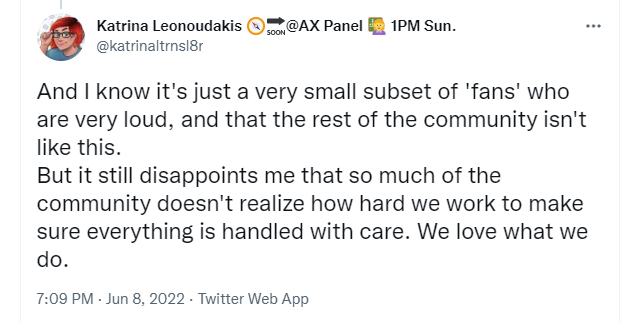 This is where Katrina proceeds to shame critics of the “well researched” localization of transing a feminine crossdressing boy into a transgender girl clout chasing “TERFs and Transphobes” and to be better.

“Writing off what was an extremely complex and well-researched localization decision as ‘transing a character for no reason’ is absolutely ridiculous and is 100% something TERFs and the right would write for some Bird Site Clout,” she worte, before proceeding to do her best MCU Sam Wilson impression. “Shame on you. Be better.” 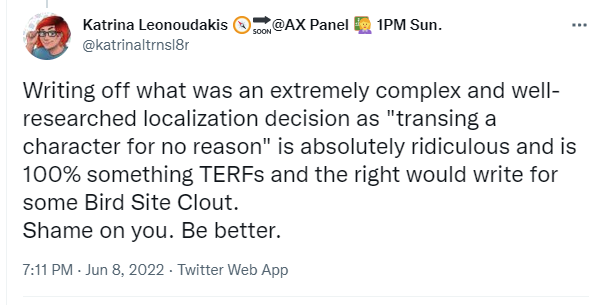 “anyways I (a) have all my notifs turned off, (b) have Block Party installed, and (c) have reply filtering, so yell at me all you want, I’m not engaging with ya’ll on this,” she concluded her thread.

However, though Leonoudakis framed criticism of the mistranslation as coming from only a “very small subset of ‘fans'” who were running with a false narrative based on a single fan translation, Seven Seas’ work subsequently also found itself under scrutiny from other localizers.

Later that same day, Japanese literary translator Emily Balistrieri, who not only has provided his services on such series as Overlord and The Saga of Tanya the Evil, but is a transgender man themselves, tweeted “The more I think about I Think I Turned My Childhood Friend Into a Girl, the more annoyed I am.”

“I talked to a Japanese friend about it,” he recalled. “They said, ‘This is not a trans story. It’s a manga for getting butterflies (moe-kyun suru) about otoko no ko BL.'”

Balistrieri further noted that said friend also shared with them “The concept of an ‘otoko no ko’ (a boy that is like a girl)”, with they explain “has less to do with the character themselves enjoying women’s clothing than to do with the view of the reader/creator.”

“It was a concept created to be enjoyed by the reader/creator,” he continued. “Completely separate from guys who cross dress or trans women.”

“An otoko no ko might be trans, if the creator decides they are, but otherwise, they aren’t,” Balistrieri said. “I’m using ‘they’ here to not default to ‘he,’ but it could easily be ‘he.'”

Sharing his friend’s wish that they “‘would like for people to understand Japanese culture before translating it,” Balistrieri asserted, “So yeah, I think @gomanga needs to figure out what happened and clarify things with the creator. An error’s an error. It just needs to be fixed. Nobody needs to be canceled.”

Retweeting Ethylene Scans’ sharing of their initial comparison report, Onyeneho posited, “So there is yet another fans vs. localization dustup over this new manga, ‘I Think I Turned My Childhood Friend Into a Girl,’ and frankly I think I’m inclined to side with the critics on this one, especially with the points brought up by this review. /1” 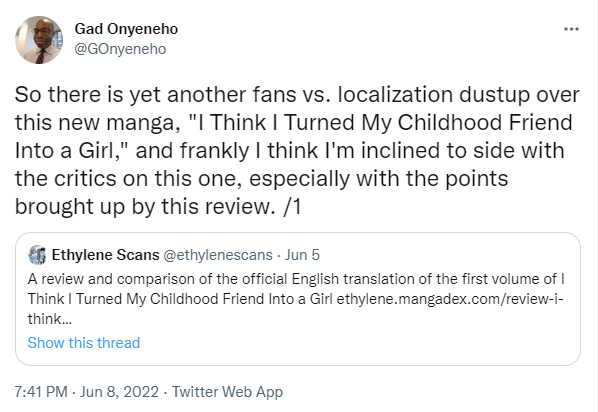 “The issue basically boils down to this: a main character Hiura wears girl’s clothes, but he explicitly says he’s male,” he wrote. “But the translation has Hiura’s love interest, Mido, refer to Hiura using feminine pronouns. That creates inconsistencies as illustrated in this page.” 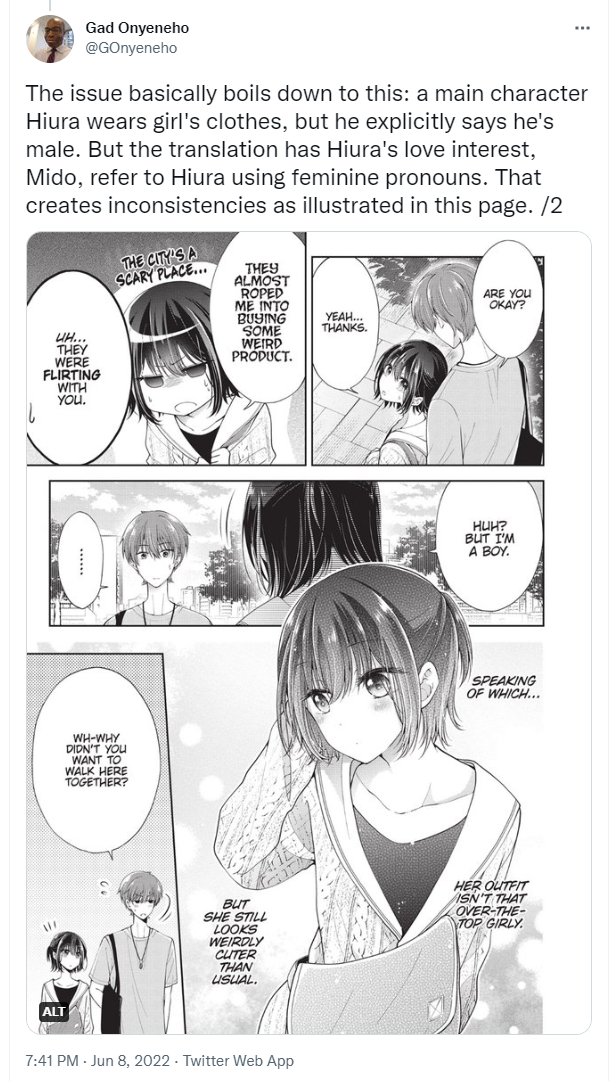 “I suppose this might be waved off as some kind of characterization device for Mido, though I don’t see that sort of thought switching in the JPN version,” Onyeneho said. “Other characters randomly jump between using feminine and masculine pronouns when referring to Hiura as well /4” 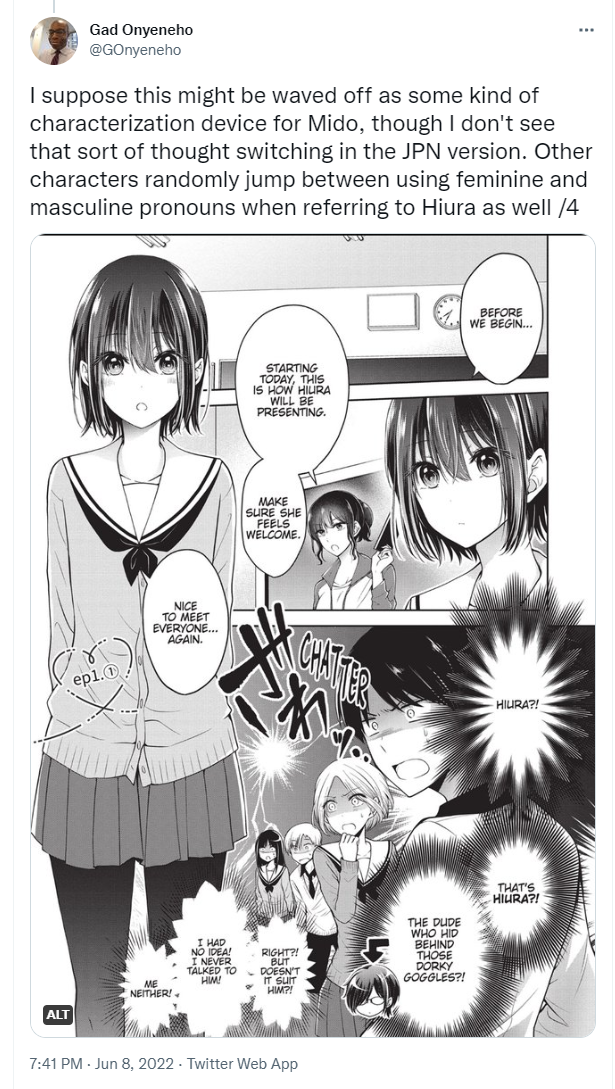 He continued, “But the kicker is that dialogue that is clearly supposed to be that of an all-knowing narrator uses feminine pronouns to describe Hiura, when the author of the manga clearly identifies Hiura as a male,” 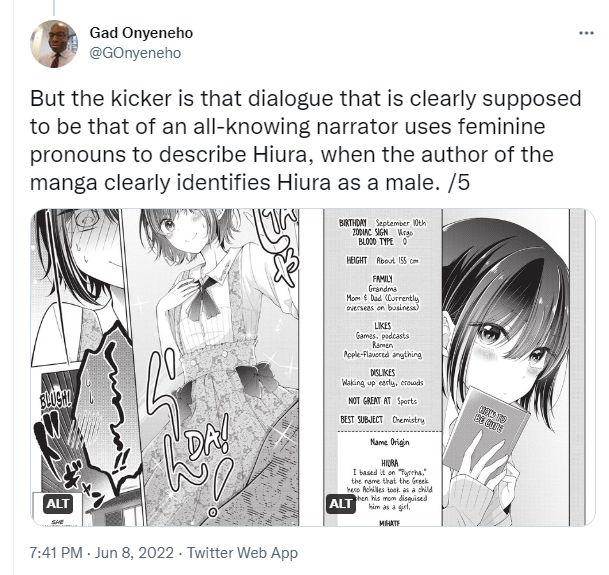 “That doesn’t sit well with me, and you can understand how it really does not sit well with others,” the translator opined. “The reviewer from Ethylene Scans very fairly brought up why such translation choices are problematic.”

“I found the review to be thorough, evidenced-based, nuanced and levelheaded,” he praised Ethylene Scans’ work. “Of course, with The Twitter being The Twitter, some are weaponizing the review to call for the localizer’s head, which of course no reasonable people would want.”

“But there is also room for discussion regarding how to handle the translation,” Onyeneho stated. “It’s not fair for professional translators to automatically dismiss the issues brought up by the blogpost as something ginned up by someone with a toxic agenda.”

Making an initial attempt to draw his thread to an end, he then affirmed, “I’ll just close by saying I do not know everything about this issue. These are initial thoughts based on what I’ve seen in both the 7S version and the original JPN manga.”

“I might have gotten things wrong, and if I did, I would be happy to be corrected,” Onyeneho said. “But from what I can see, I don’t think the translation of this manga was handled sensitively enough.”

Returning to offer one last though, he added, “Okay, postscript. People have brought up this page that comes up further along in the series. Here, Hiura clearly does not see himself as female, so it’s really uncalled for to use feminine pronouns with him”

Onyeneho would later engage Leonoudakis personally in response to a thread started by visual novel localization company Love Lab CEO Meru in regards to the controversy.

This tweet would draw a now-deleted response from Twitter user @ViingtQuarte, who attempted to argue against the claims that, as she summarized, the “‘character who is saying she feels better dressed as a girl and that she finally found the real her is OBVIOUSLY a guy because she uses ‘boku’ and i’ve read somewhere it’s a masculine pronoun'”.

“I’m so sick of it,” they declared. “Open your eyes, she can’t be more trans than that.”

In turn, Onyeneho would join the conversation, replying to @ViingtQuatre, “I’ll give the original critic their due for the fact that they did bring receipts. The character in question does declare that he is male in multiple parts of the series. What’s bad is the bad-faith pile-on against the translator though.” 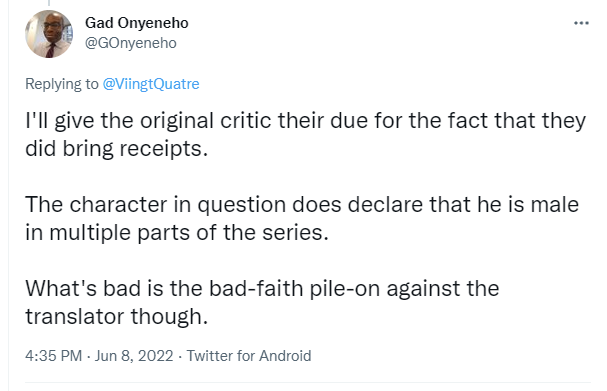 Making her own respective entrance, Leonoudakis would attempt to defend the mistranslation on the grounds that “the translator behind the official translation has done loads of research into the character and series and made a decision based upon that,” and in her opinion, “The original critic’s ‘receipts’ pale in comparison.”

However, Onyeneho quickly shut down this disingeunous appraisail of Ethylene Scans’ work, informing Leonoudakis, “Just bought both the English and JPN version of the first volume, and reading through them I’m afraid the localization choices in question do not make sense. I won’t blame the translator though, because I won’t pretend to know how editing process went.” 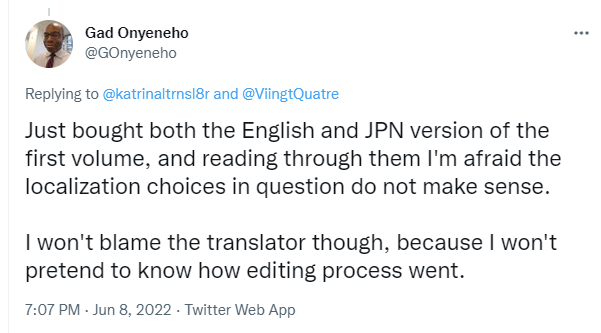 What are you thoughts on the escalating debate of localization? Let us know your thoughts in the comment section and social media.

Next: The House In Fata Morgana Author Pushes Back After Western Localizer Boasts Of “Rejecting” Inward-Knee Female Character Designs For Being “Unnatural”