In the latest case of a Western localization making changes to an original Japanese work, Yen Press has announced that their upcoming English translation of Mato Seihei no Slave will be released under the title Chained Soldier. 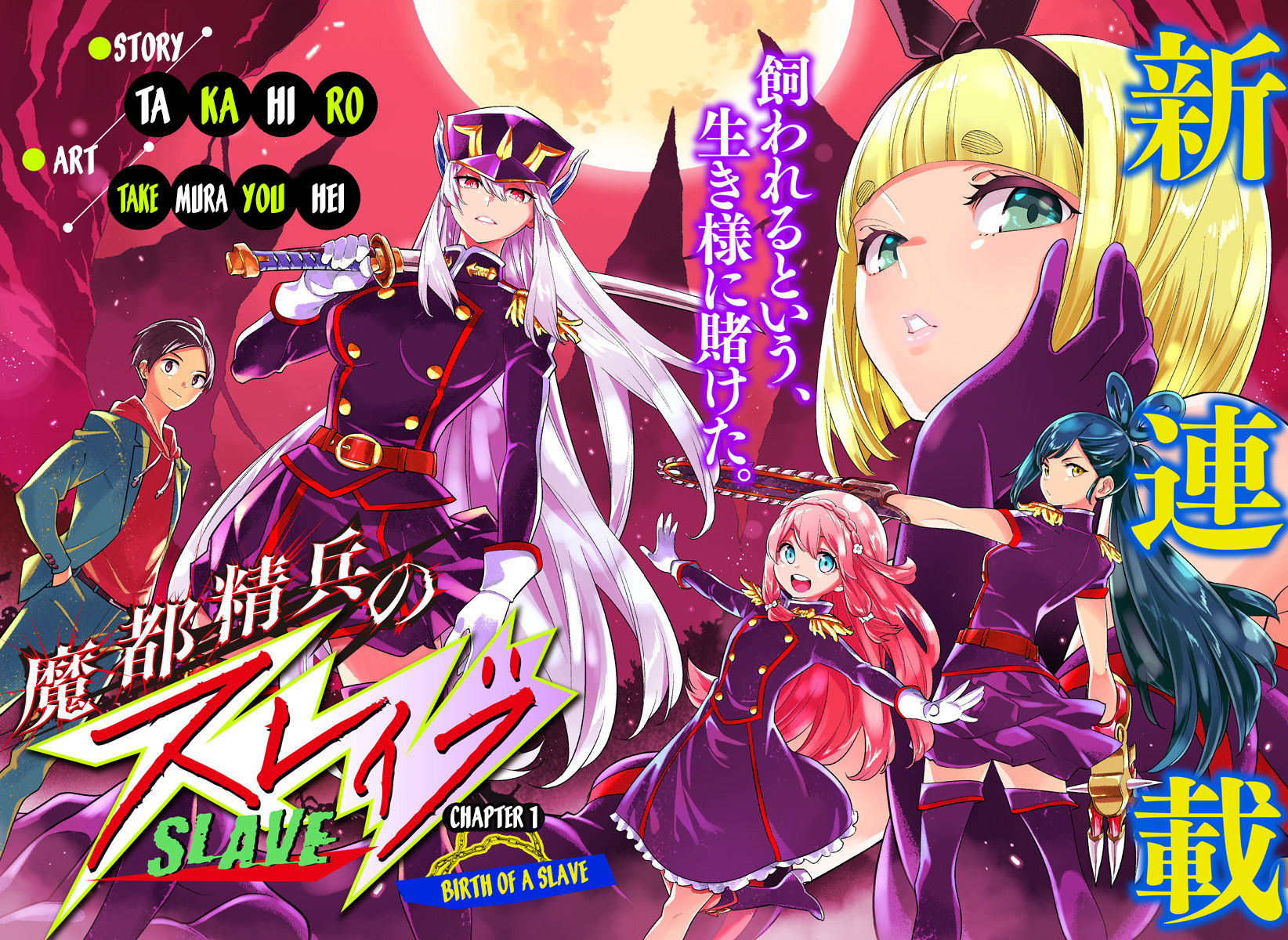 Written by Akame Ga Kill! creator mangaka Takahiro and illustrated by I-Revo: Ice Revolution artist Youhei Takemura, Mato Seihei no Slave depicts an alternate-world where Japan has been littered with the sudden appearance of an alternate dimension known as Mato, wherein Peaches – a special fruit which grants human women special abilities – and monstrous creatures known as Shuuki can be found.

Unfortunately, the Shuuki hold nothing but hostility for Earth’s resident species, a sentiment which soon leads humanity to find itself waging a war for survival against the Mato’s demonic residents.

Amidst this ongoing conflict lives series protagonist Yuuki Wakura, a young high school student who one day finds himself caught in the crossfire of a Shuuki attack on Japan. 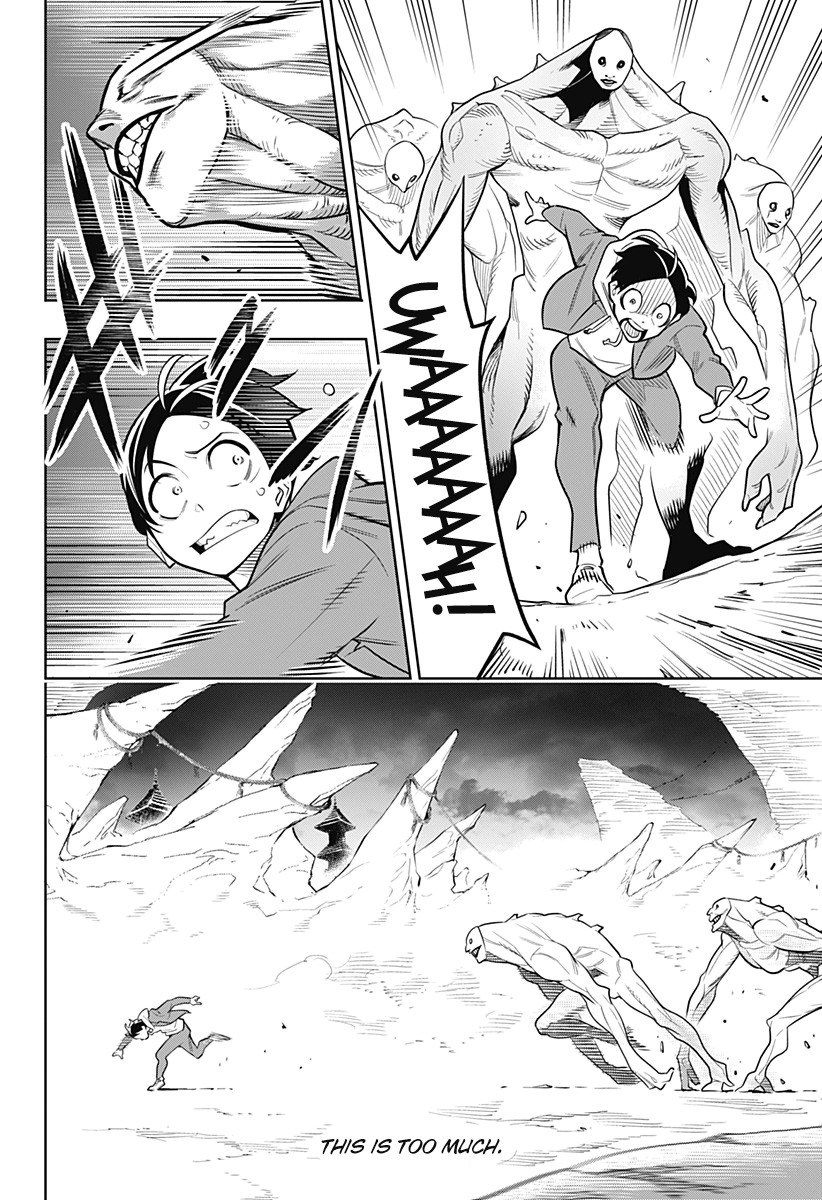 He is soon met by Anti-Demon Corps Chief Kyouza Uzen, who uses her Peach-granted powers to turn Yuuki into her ‘Slave’ – a status which confers to her servants an elevated power level.

Surviving this initial event, the two soon become partners, teaming up to help Kyouza become the head of the Anti-Demon Corps and Yuuki get revenge against the Shuuki who killed his sister. 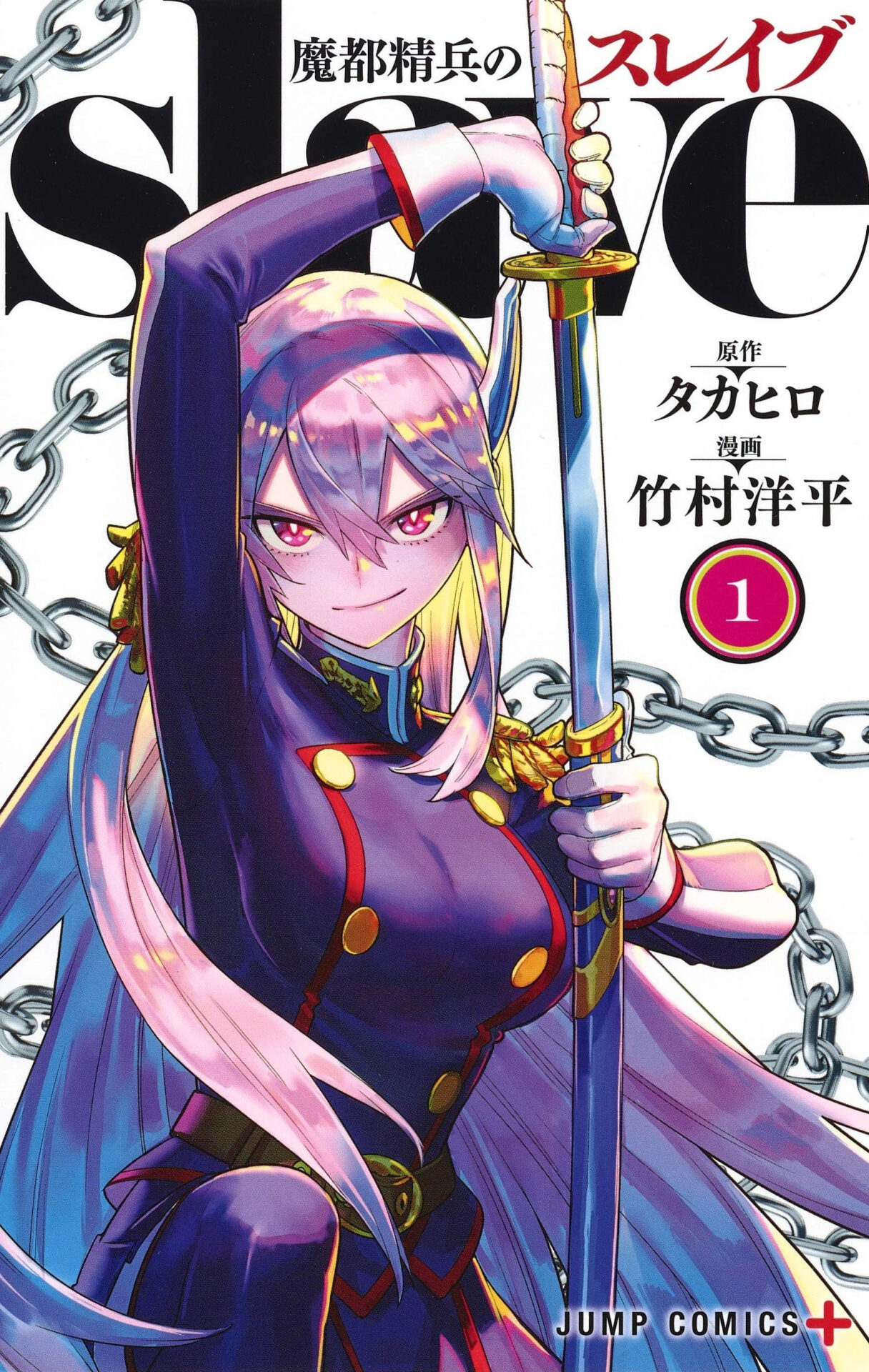 Yet despite this obvious reason for the word ‘Slave’ being in the series’ title – the first chapter is even titled “Birth of a Slave” – when Yen Press debuted the cover of their English language release, the term had not only been removed, but the series had been outright renamed.

Rather than Mahto Seihei no Slave’s closest literal English translation – Slave of the Magic Capital’s Elite Troops – the series was instead titled Chained Soldier. 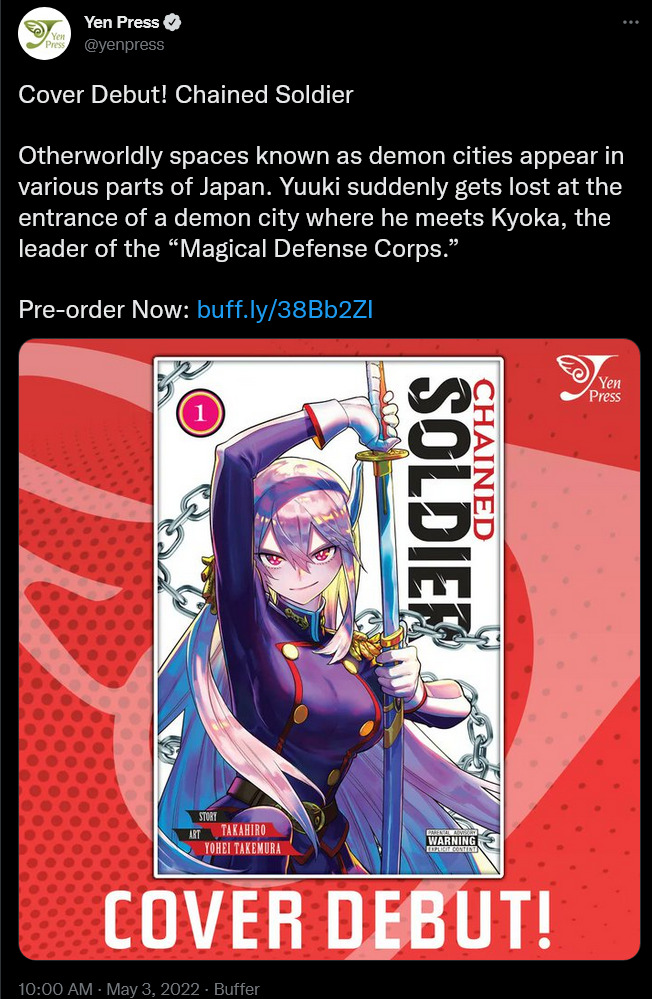 This might as well be a completely different manga, as Yen Press’ new title goes against the entire lore of the series.

Mato Seihei no Slave’s first chapter clearly establishes that men cannot be soldiers in the Anti-Demon Corps, as membership in its ranks is only available to Peach-eaters, and thus only women.

As pointed out by Twitter user @ultimaniacx4, “So what are they gonna call him in the story? ‘become my chained’. He’s not a soldier.”

In addition, Yuuki’s ‘Slave’ forms has access to several different transformations, all dependent on which member of the Anti-Demon Corps happens to be ‘enslaving’ him at that particular moment.

Further, each of these forms possesses the word Slave in its names, for example, as seen above, Initial Slave, Slave Whirlwind, Slave Warcloud and Slave Sparkling Star. Will Yen Press change their names too?

Not to mention that the series continues to introduce ever more new slave forms, such as the recent Slave Edge Sword form for Kyouka: 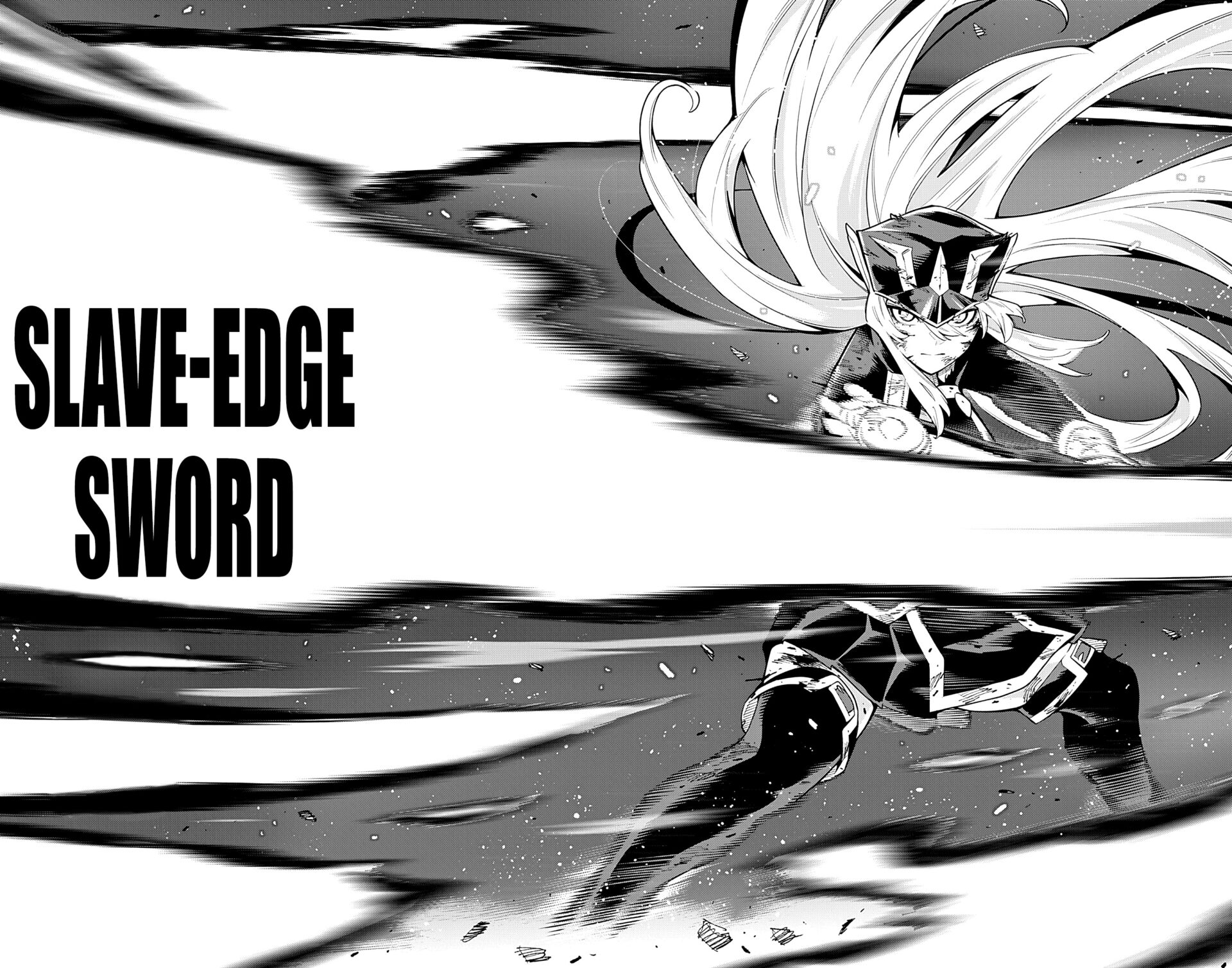 And the motorcycle-inspired Slave Roar form for Mira. 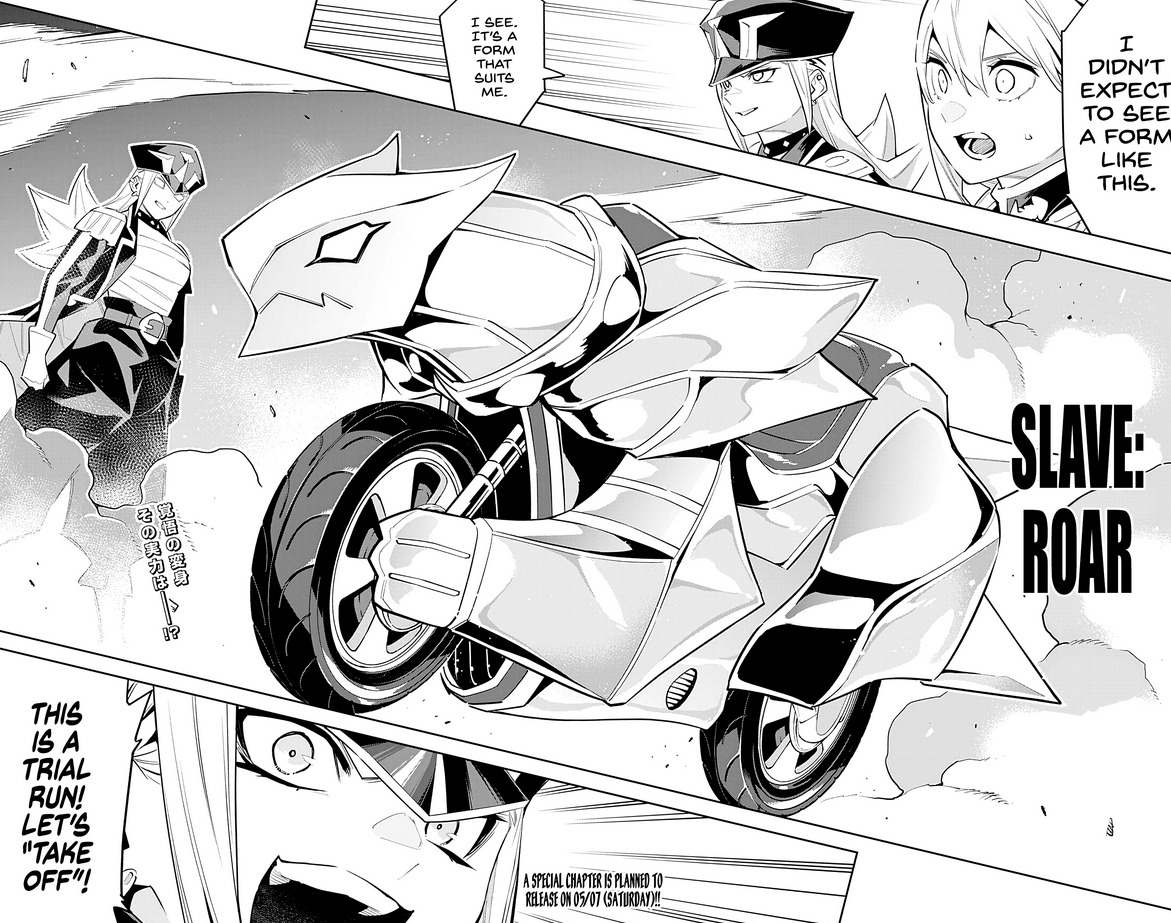 Fans were unsurprisingly both unhappy to discover this change and confused at the reason behind it.

Perfectly spelling out why fanscans exist, Twitter user @nanjasoria replied to Yen Press’ announcement, “What Localization is: Adjusting content to current Western sentiments. Removing, replacing wrong think and what can trigger wrong think. What Localization is not: Faithful translation of source in the preserved cultural context. Justification: Controlling popular culture.” 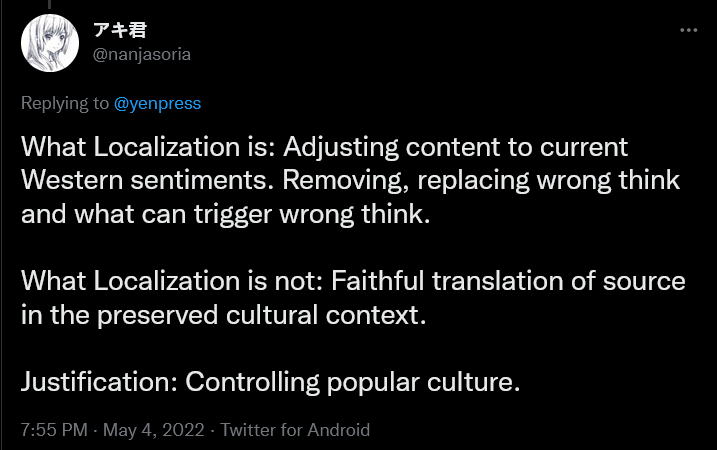 “The word ‘Slave’ is literally in English in the Japanese Title, like it’s the biggest thing on the cover its impossible to miss,” pointed out @JoblessMatthew. “What a weird thing to change in the localization.” 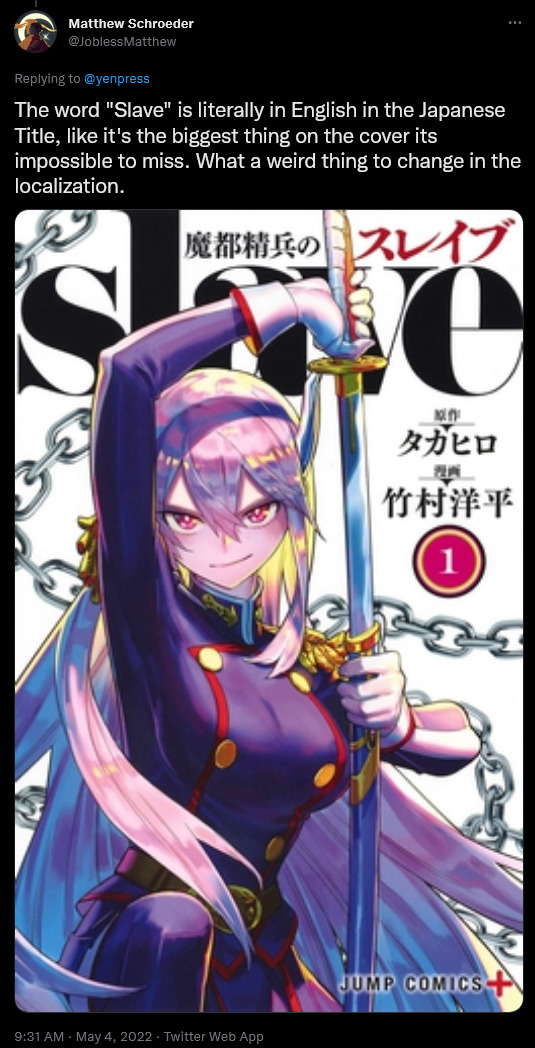 Another twitter user @HanekawaSenpai agreed, themselves asking, “What is with the weird localization of the title? Slave is part of the title. How in the help do you get chained soldier? Change anything inside the manga while you were at it??”

As noted by @gilga10, even Germany, whose government banned Putin isekai series The Ride-On King, treated the series more respectfully.

“That eng name is kinda lame,” write  Even the german version has a better english name” – Demon Slave. 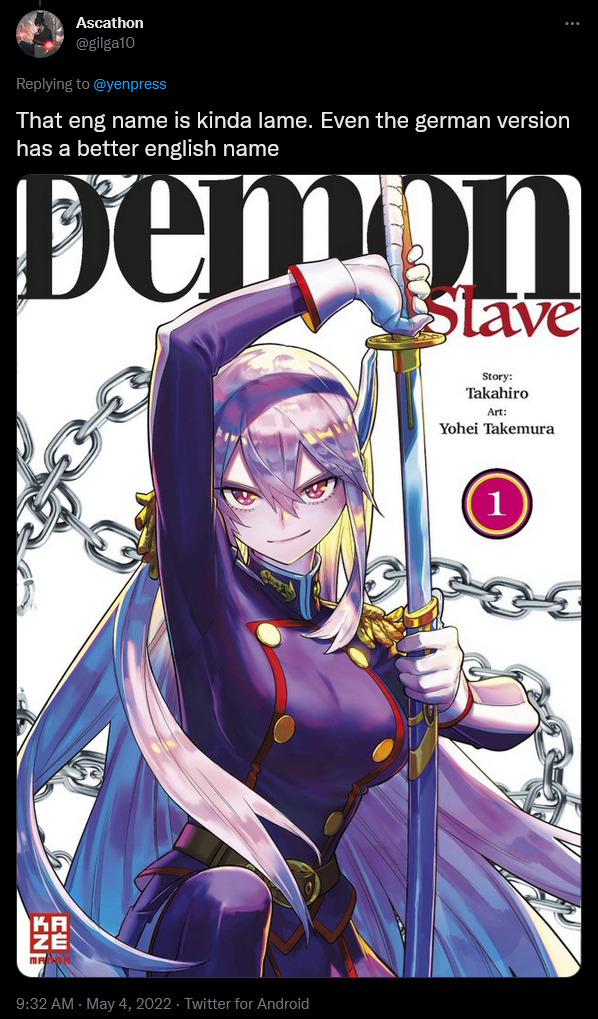 Mocking the likely reason behind the name change – the West’s history with African slavery – @Romangelo wrote, “The African-American of the Magical Capitol Elite Troops’ Okay? Nothing offensive.”

“Well that sucks, if they removed Slave from the title due to censorship what else are they going to remove?” said @azureknightkite. “Is this going to end like Ayakashi Triangle where Viz kept censoring whole chapters until they dropped it thinking it was somehow gonna be child friendly?”

@thehobbynexus lamented, “Damn I was waiting for this series, but censored name = no buy from me.”

“Who know what else you will change to be politically correct, don’t follow Marvel and DC’s footsteps,” they added. “Please respect the original work.”

Its unfortunate to see this move from Yen Press, especially as just a couple of years ago, the publisher had their English language releases of No Game No Life taken down from Amazon, ostensibly out of concern over what the online storefront perceived as ‘problematic’ content.

In the end, this change just provides more evidence as to not only why we need more direct publisher simulpub apps like Manga Plus and Comikey, but why any other publisher – preferably Seven Seas Entertainment, should’ve gotten the license in the first place. 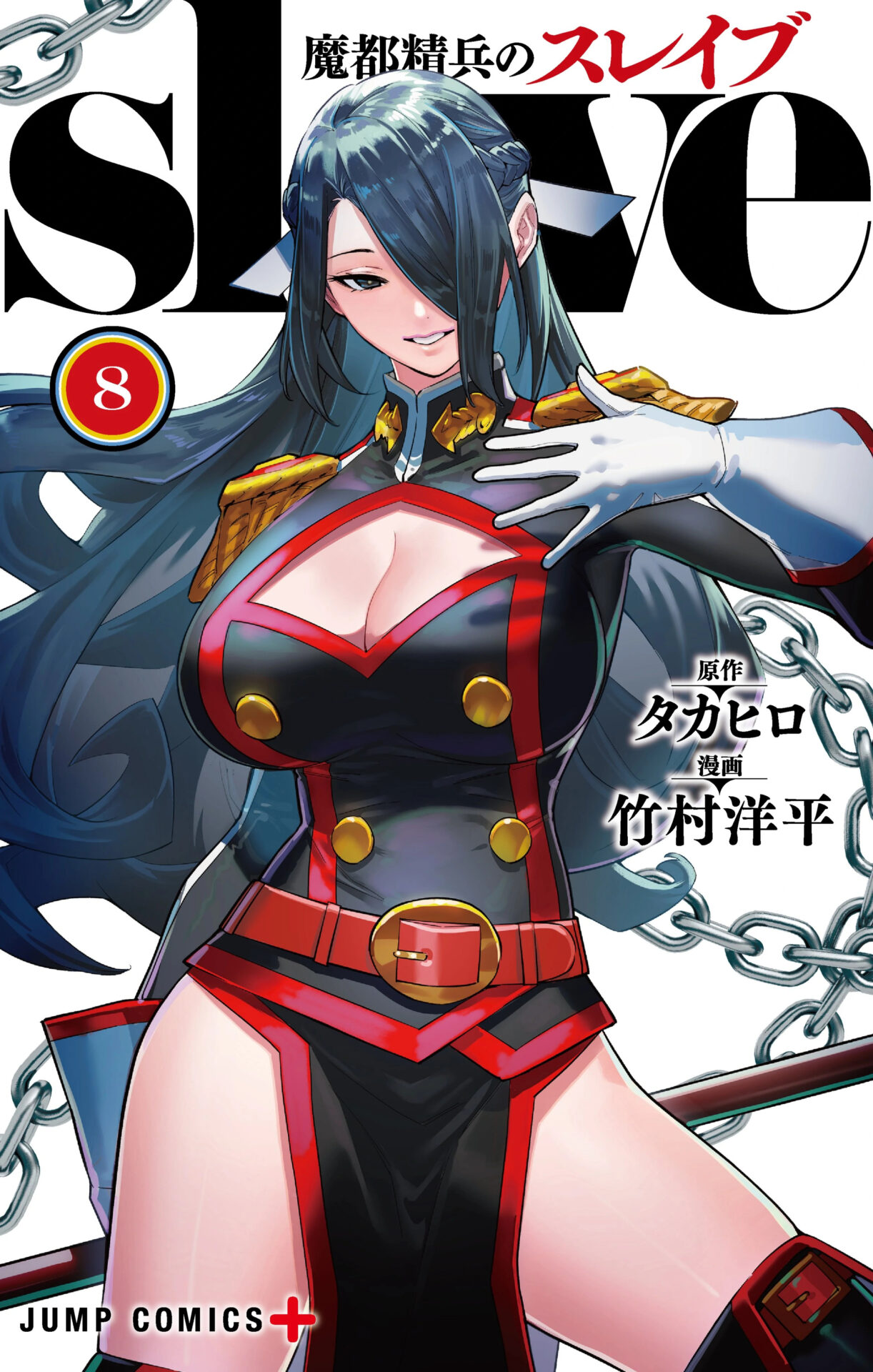 What do you think of the situation? Are you surprised Yen Press, of all Western publishers, did this? Sound off on social media or in the comments down below!

NEXT: Shueisha Cancels Anthology Manga ‘I Grew Up In A House With ‘God” Following Alleged Backlash From Happy Science Religious Group