It’s time to get excited and full of desire, as the newly dropped final trailer for the upcoming Dr. Stone TV special centered on Ryuji has revealed the episode’s official release date. 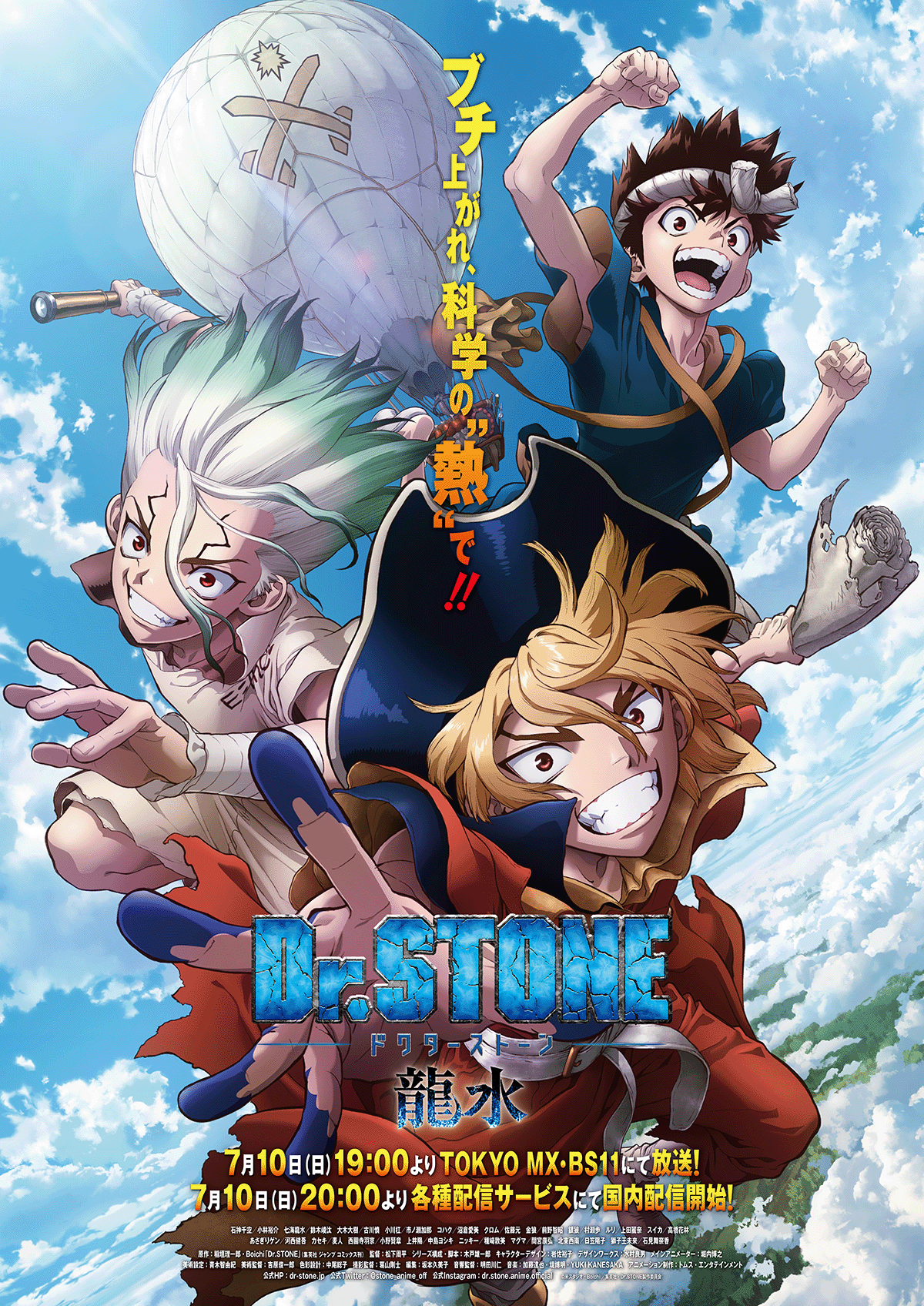 Revealed by Toho Animation on June 12th during a livestream event, the upcoming TV special’s final trailer has confirmed that the Ryusui-centric adventure will be broadcast on TOKYO MX, BS11, KBS Kyoto, Sun TV, and Animax and simulcast on Crunchyroll on July 10.

Further, the trailer confirmed that the hour-long episode will be adapting the introduction of desire-filled fan-favorite navigator Ryusui – as seen in the Age of Exploration arc of Riichiro Inagaki and Boichi’s popular manga-  including his awakening, the team’s quest for oil, and the construction of the Perseus.

The trailer begins with Senku (CV: Yuusuke Kobayashi, Subaru Natsuki, Re: Zero – Starting Life in Another World), Taiju (CV: Makoto Furakawa, Saitama, One-Punch Man), Nikki (CV: Atsumi Tanezaki, Anya Forger, Spy x Family) and Minami (CV: Youko Hikasa, Utahime Iori, Jujutsu Kaisen) on a raft heading to the island where the ultimate navigator that will assist the Kingdom of Science to cross the world and conqueror the age of  exploration in one fell swoop.

According to Minami, on the island, there should be ship captain with godly skills that can captain a sailing ship.

Their journey brings them to the Nanami Academy, whose sailing-inclusive curriculum and campus is funded by the biggest name in the maritime industry, the Nanami Corporation, whose founding clan’s outrageous son is Ryusui himself.

Our science team then encounters the petrified and soon to be navigator himself, Ryusui Nanami (CV: Ryouta Suzuki: Kaguya-sama – Love is War and Seven Deadly Sins), who upon being revived from petrification proudly proclaims, “Finally, I’m back!! And this world will be mine all over again!”

After learning about the state of the world, he further declares, “This is the perfect chance, then. You people did well to bring me back! If all the world’s up for grabs now then I’ll just have to take it for myself!!”

Putting on some clothes, Ryusui then comments on the team’s beautiful women, to which Magma says he only sees two, acknowledging Kohaku and Minami but ignoring Nicky.

“Whatever do you mean by that?” Ryusui asks in turn. ” There are all types in this world, but every lady is a beauty in her own right. Am I right?”

Less than a day after being revived, Ryusui is then seen having already claimed full ownership rights to the oil fields created currency called the Drago, and in the process become a millionaire.

Ryusui is then seen taking a look at the plans the Kingdom of Science drew up for the motorized-hybrid vessel that will eventually become Perseus.

Following some back and forth about their future plans, Ryusui tells Senku that before the ship can take them around the world, he’ll need to find some oil to power the ship.

Ryusui then offers to help get him where he needs to go on one condition: the full rights and ownership to whichever oil fields they find. 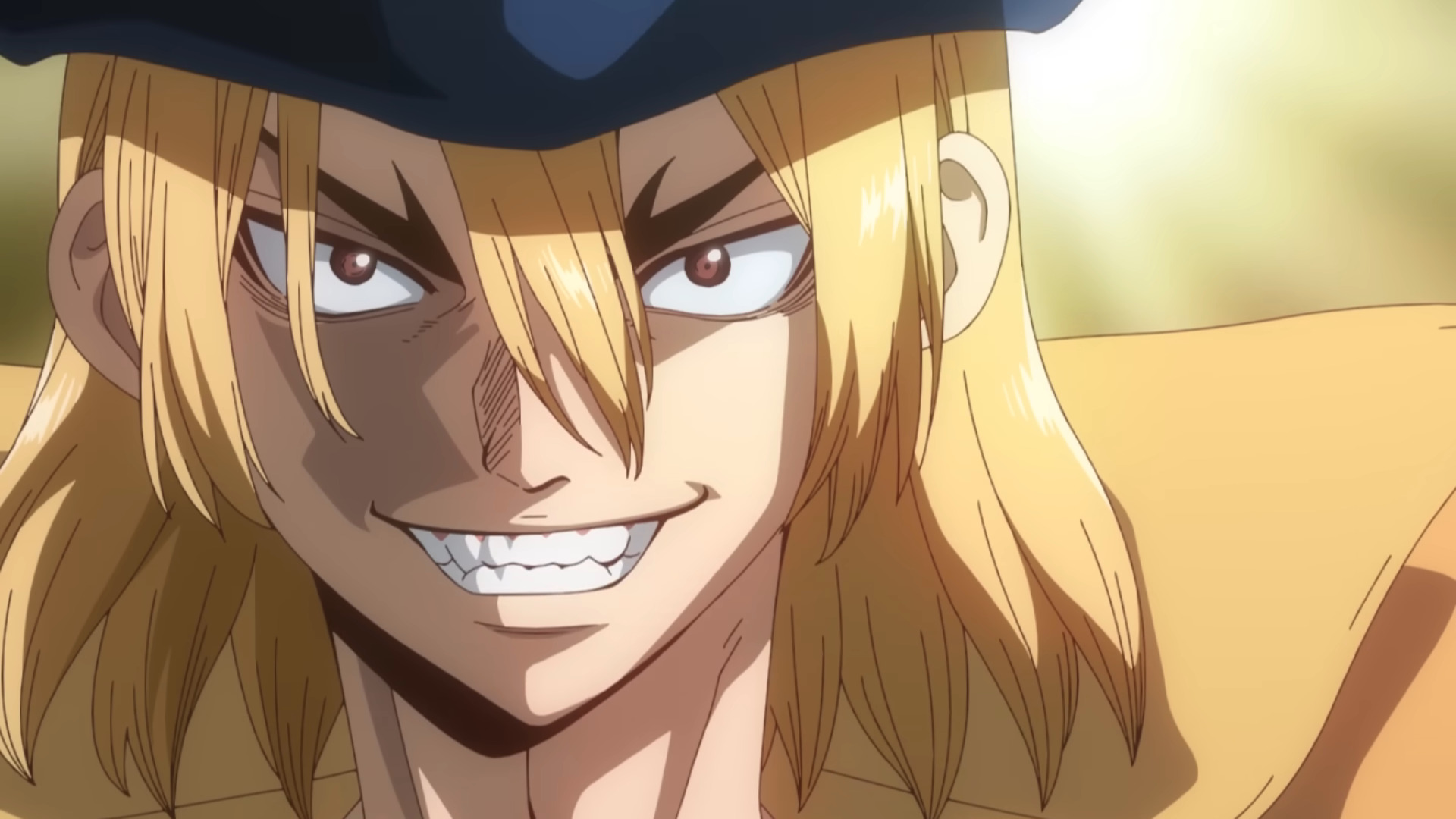 Ukyo (CV: Kensho Ono, Canute, Vinland Saga), Chrome (CV: Gen Satou, Pi-Chan, JoJo’s Bizarre Adventure Part 6: Stone Ocean), and Kohakuare are next seen searching for oil, but to their shock, instead finding that “Right on the border of Shizuoka” there exists”a huge waterfall on par with the mighty Niagara!!”

To this, Senku realizes that what they were seeing was an event that happened only “every few centuries: the eruption of Fuji!”

The trailer ultimately ends with Suika (CV: Manaka Iwami, Millie, Spy x Family) opining, “If only we could ride a big bird and look down from the sky from way up high we could see exactly what the land looks like!!”, to which Senku has a brain blast that eventually leads to the development and use of hot air balloons in order to search the sky for oil. 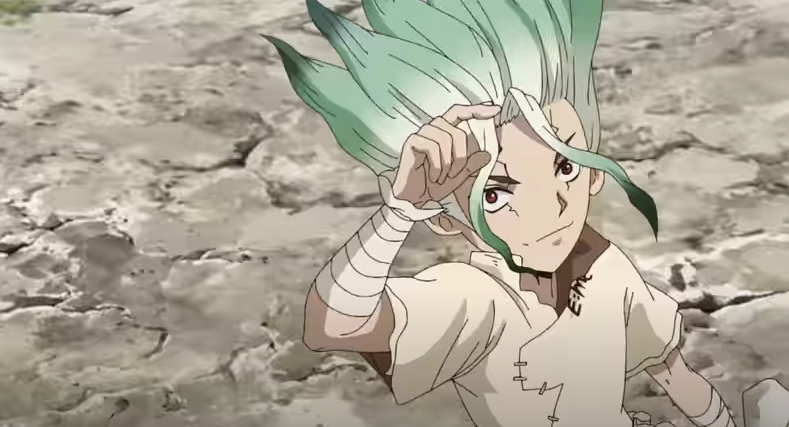 Following the Ryusui special, the third season of Dr. Stone is scheduled to launch in 2023.

Are you excited for new Dr. Stone content?  Let us know your thoughts on social media or in the comments down below!

NEXT: Crunchyroll 100% In On Mob Psycho 100, Announces Simulcast Of Upcoming Season 3