The return of Thorinn is on the horizon, as animation production studio MAPPA has officially revealed the first trailer and key visual, as well an official release date, for the highly anticipated second season of Vinland Saga. 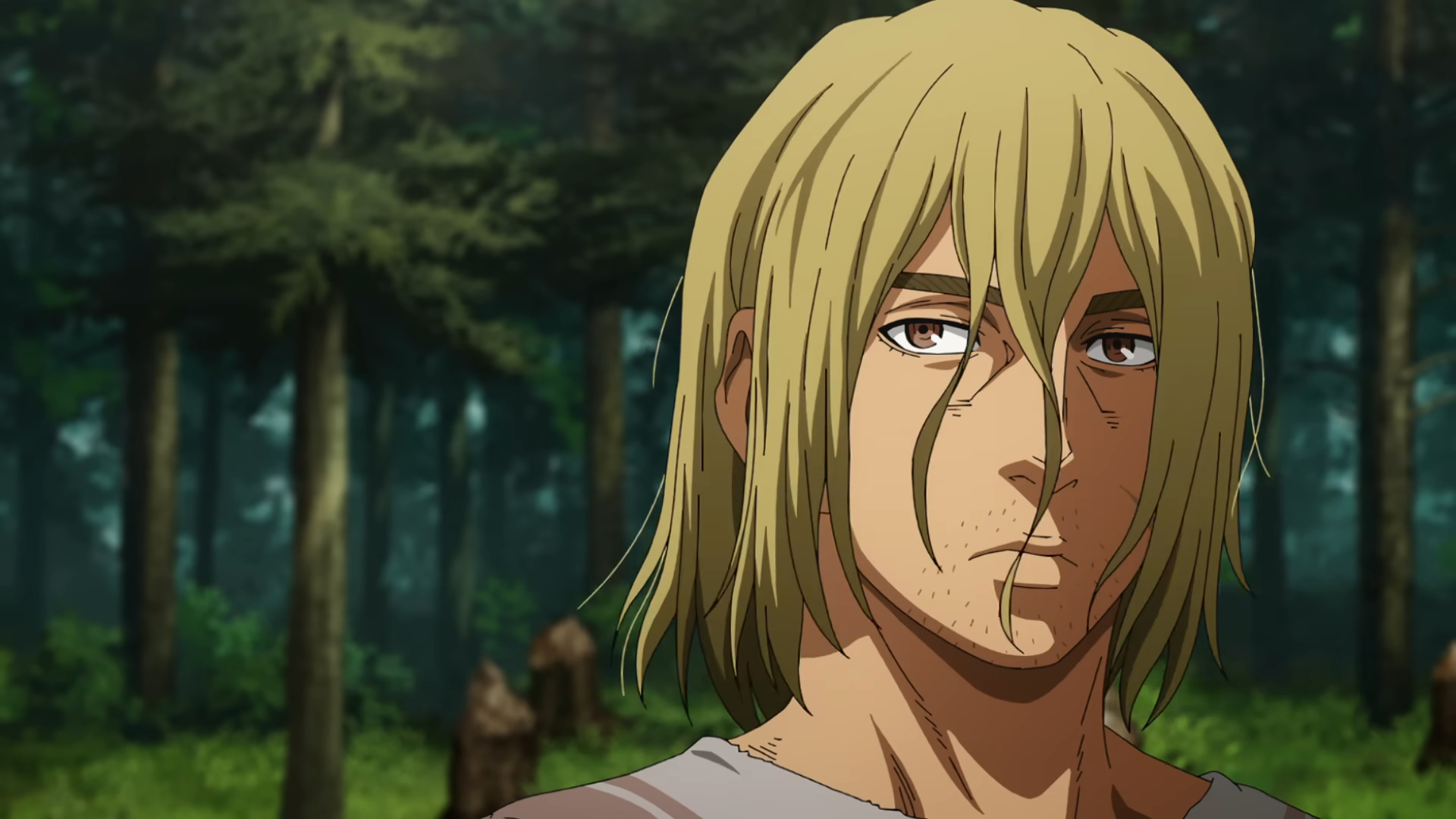 Taking over production duties from Wit Studio, MAPPA gave fans their first look at the upcoming return of the animated adaptation of Yukimura Makoto’s award-winning historical manga during a June 8th livestream event hosted by on studio TWIN ENGINE’s YouTube channel, with whom MAPPA shares a working partnership.

Adapted from the award winning historical manga by Yukimura Makoto, the second season of Vinland Saga is set to adapt the second major storyline of the series, the Slave Arc – or as the Vinland Saga fandom calls it, the Farmland or Farm Arc.

Divided into sections, the trailer’s first is ‘Guilt of Beasts’, referring to the remorse felt by Thorfinn (CV: Yuto Uemura, Suneater, My Hero Academia / Atsushi Nakajima, Bungo Stray Dogs) for all the murders he committed during his time fighting alongside Askeladd and Canute.

Following a series of quick flashbacks to these events, the trailer then shows a beaten-up Thorfinn waking up on the farm has now finds himself enslaved to work on. 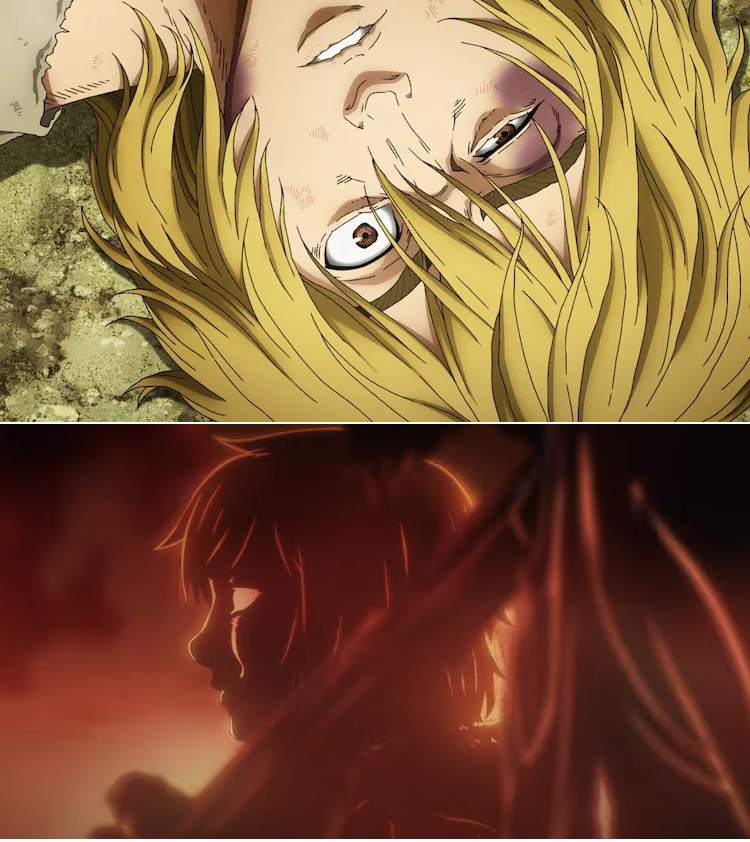 Titled Rebelling Souls, the next section sees a ‘guest’ of the farm – bodyguards who are meant to help keep the land safe and in order – named Fox taking the boss’ son to kill a slave as a rite of passage. Since Thorfinn has lost the will to live, he volunteers as tribute.

However, the young master finds himself too scared to do the deed himself, so Fox takes it upon himself to accept Thorfinn’s offer and give credit to his charge. Fox then proceeds to slash Thorinn multiple times, which the enslaved protagonists silently takes without even so much as a blink. 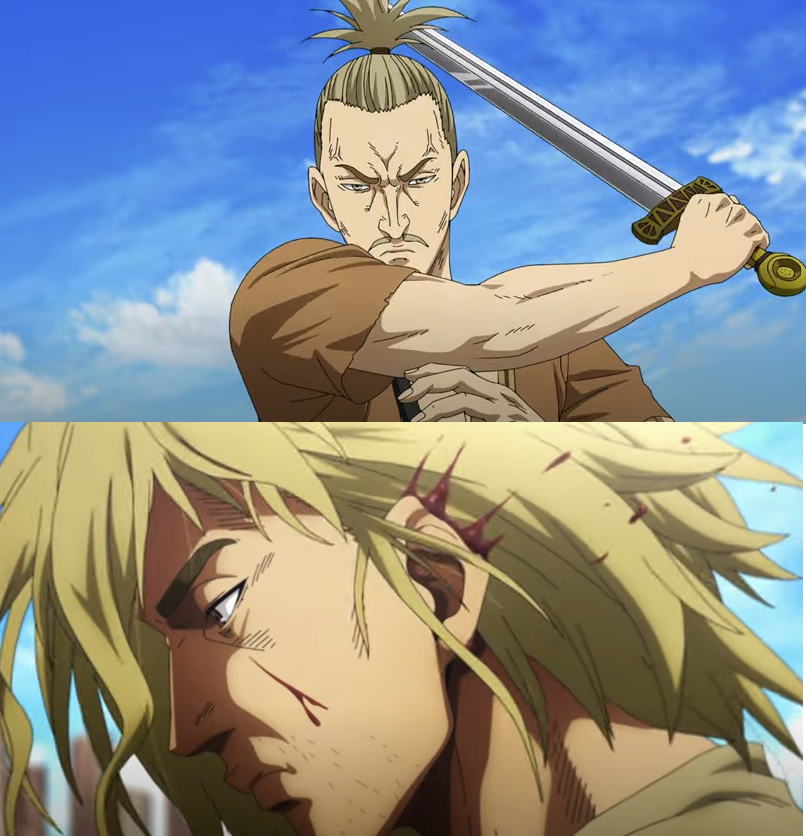 We’re also introduced to Thorfinn’s fellow slave – and eventual friend – Einar (CV: Shunsuke Takeuchi, Revolver, Yu-Gi-Oh! VRAINS), who unbeknownst to the young warrior, is set to play a bigger role in his life than expected. 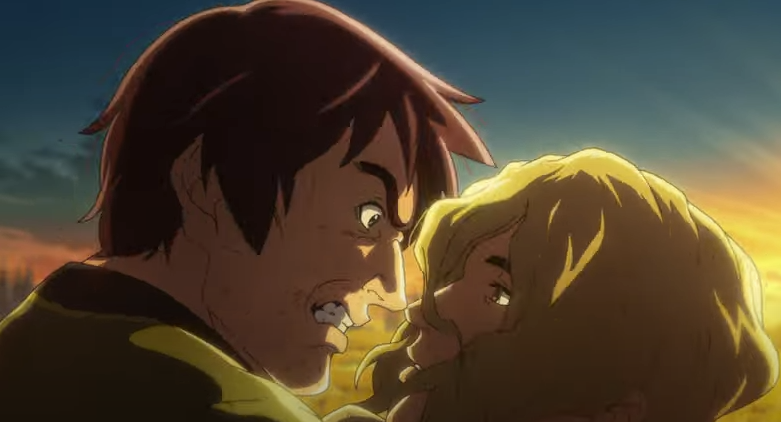 The introductions continue in the next section, “Their Wills”, wherein we come face to face with the owner of the farm, Ketil, and his sons, the swordsman Thorgil (CV: Taiten Kusunoki, Ibuki, Beasters) and the timid heir to the farm itself, Orman (CV: Yu Hayashi, Ino Takuma, Jujutsu Kaisen). 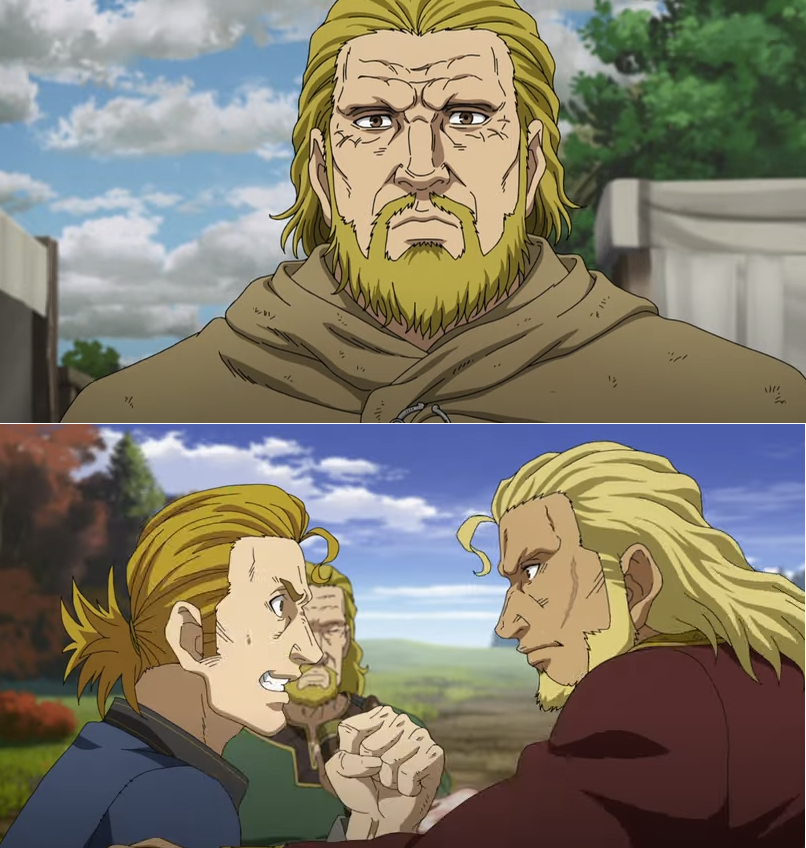 Next up is the section “Induce a Dark Shadow”, which opens with Ketil and Thorgil waiting to meet King Canutre, who has taken over in the stead of his father King Harald’s death, for what the former expects to be agricultural negotiations. 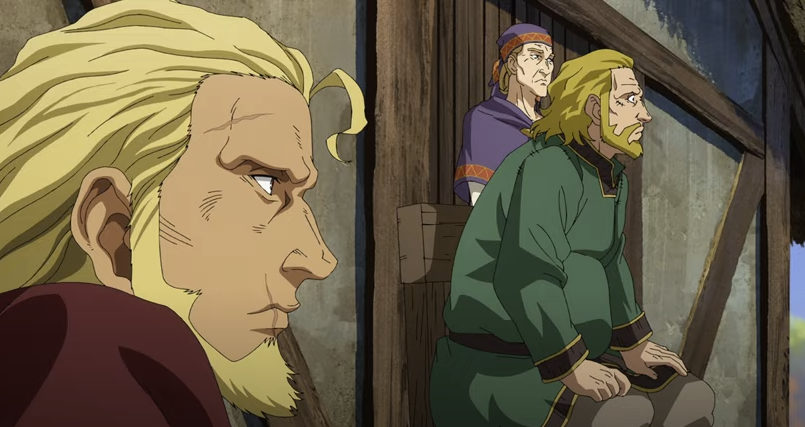 It then cuts to show Leif (VC: Yoji Ueda, Robert E.O. Speedwagon, Jojo’s Bizarre Adventure series) and his aptly-named son Bug Eyes inquiring with Ketil about the whereabouts of the enslaved Thorfinn. 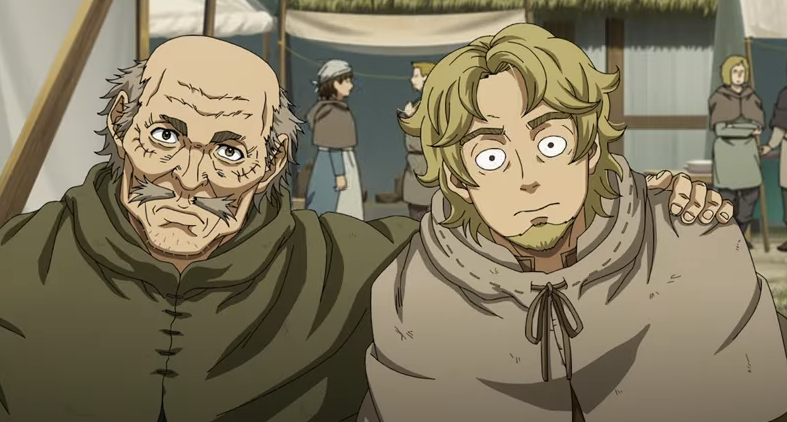 As it turns out, prior to arriving at Ketil’s farm, Einar was one of the many slaves who crossed paths with Leif in his search for the enslaved Thorfinn. What a small world. 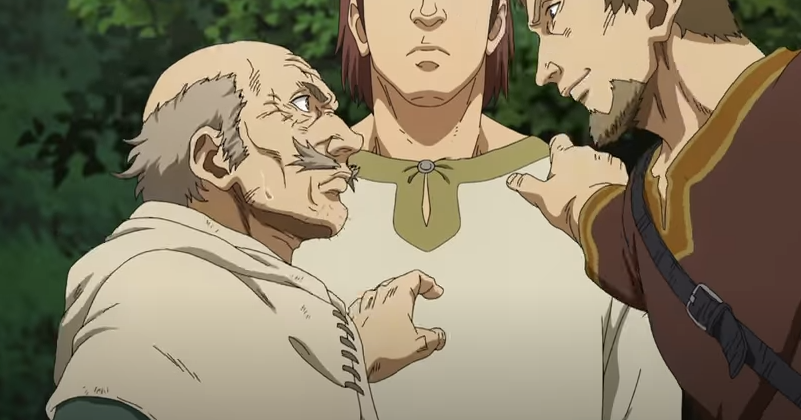 In the next section, “With the Flame Left Behind”, the trailer flashes back to the moment when Einar arrived at Ketil’s farm wherem faced with the gap in status between him and Ketil, he stares in awe of the vast lands that his new master owns. 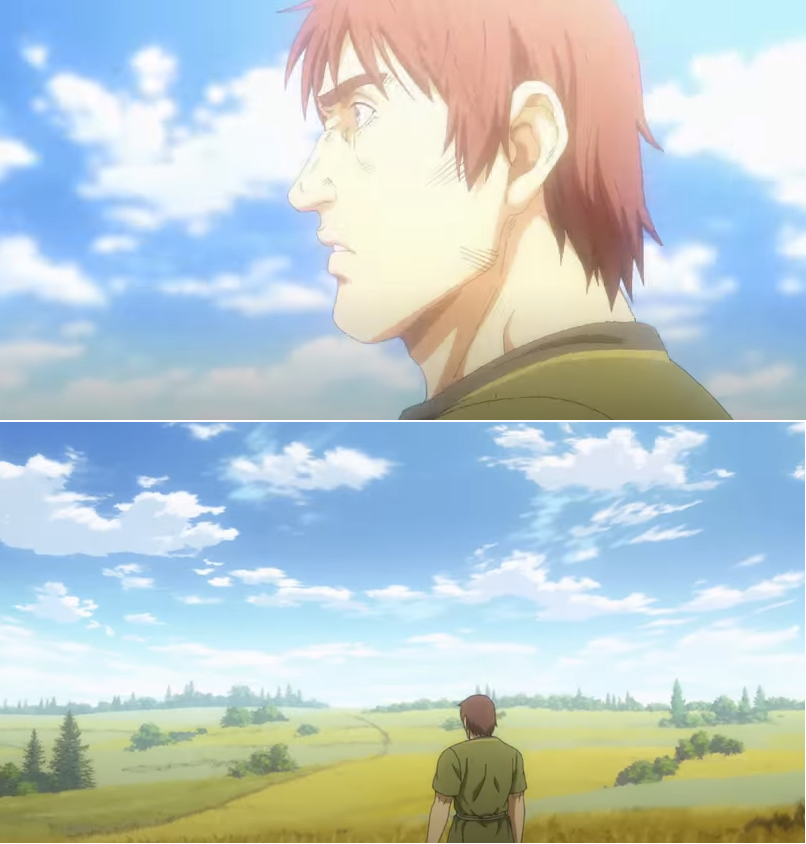 That last sentiment is further reinforced by one of the trailer’s next scenes, wherein Thorfinn and Einar are shown to be engaging in the backbreaking work of cutting down a forest of trees in order to cultivate and harvest the land. 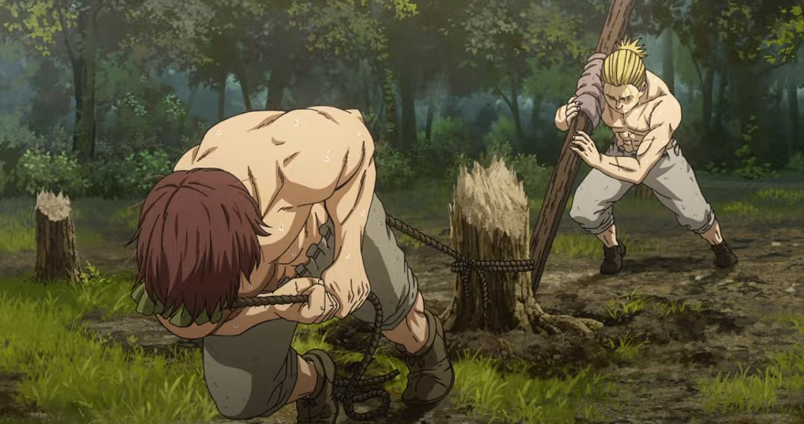 Things heat up in the next section, “The Sin”, as another of Ketil’s farm guests, Snake (CV: Fuminori Komatsu, Jean Pierre Polnareff, Jojo’s Bizarre Adventure series) attempts to strike down Thorfinn with Fox’s sword.

However, much to even his own surprise, Thorfinn almost automatically responds by blocking the strike. Impressed, Snake says that this reaction is that Thorfinn’s body wants to live. 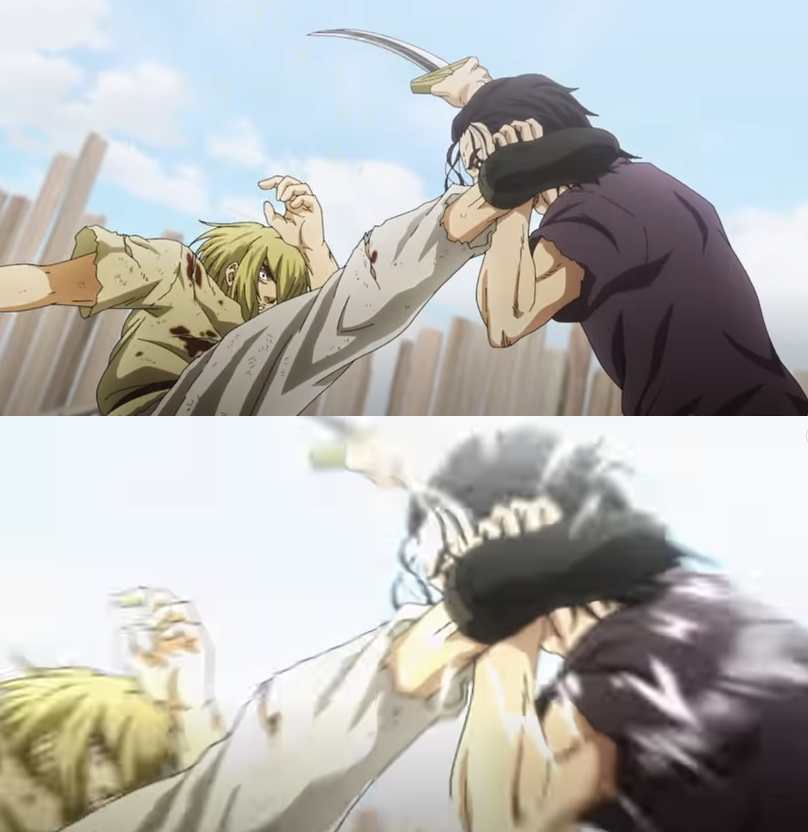 The next scene in the trailer shows Thorfinn, in another visual metaphor for his guilt, surrounded by the corpses of all the people he killed over his time with Askeladd. 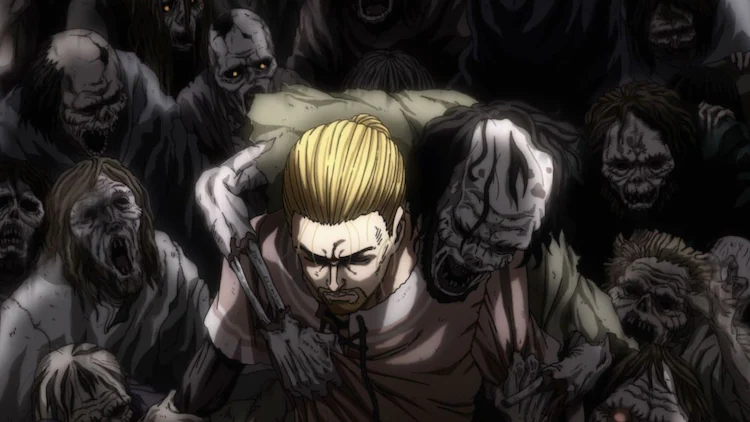 As the final section, “The Anger Reveals”, begins, King Canute is shown assessing the state of the battlefield following the declaration of his truce with Eadric.

To this end, Canute demands that in order for there to be peace in Merica, Eadric must assassinate King Ethelred. Otherwise, Canute warns, he’ll have Merica burnt to the ground to curb his opponent’s power. 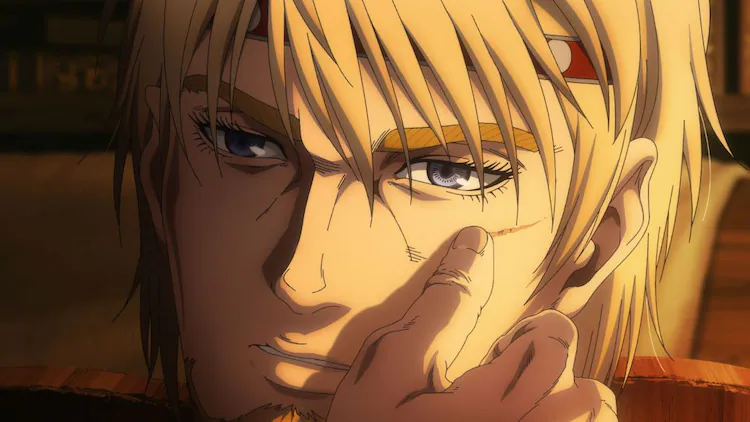 Not one to be left out of the festivities, Thorkell (CV: Akio Otsuka, Solid Snake, Metal Gear Solid series) makes a last minute appearance to voice his anger to Canute over the truce with Merica.

Specifically, Thorkell is furious that he has been ordered by the king to retreat from battle without having claimed the head of the enemy’s commander, Eadric. 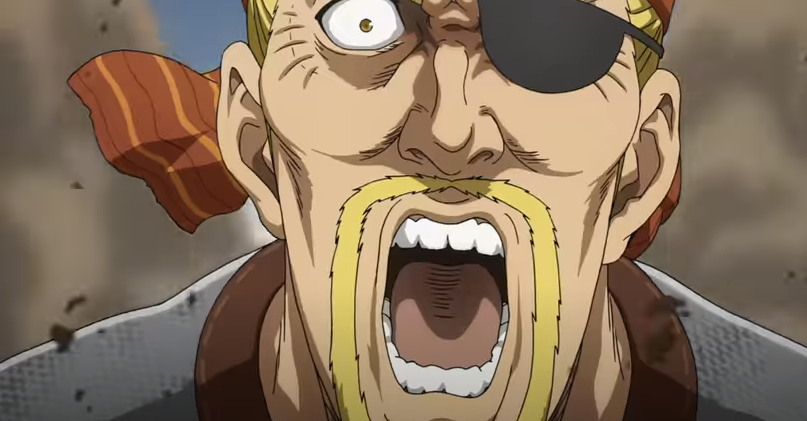 Finally, at the end of the trailer, we’re introduced to one of the series’ most important characters, Hild.

A hunter with an intense grudge against Thorfinn for his killing of her father, Hild swears to be the one to hold her enemy accountable to his recently-taken vow of absolute non-violence. 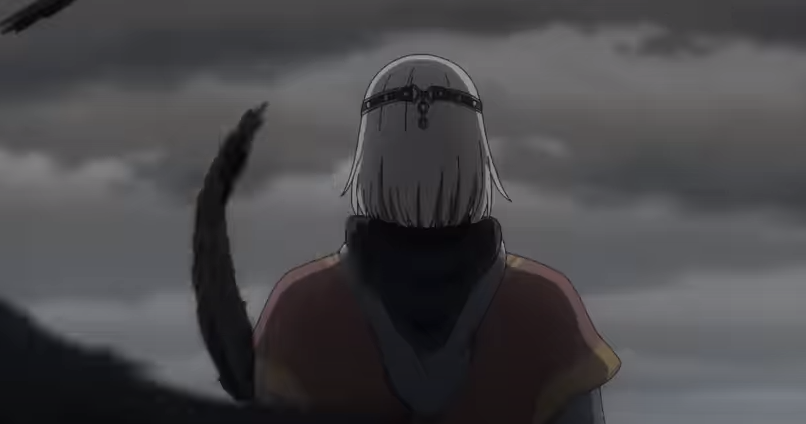 Notably, as manga readers may have noticed and anime-only fans should be made aware of, Thorinn’s design in the above trailer differs from Makoto’s original design for his appearance during this arc.

In the manga, Thorfinn is significantly thinner, his hair is longer and has facial hair growing in, whereas in the anime, he’s sporting an overall healthier look than one would expect of a slave. 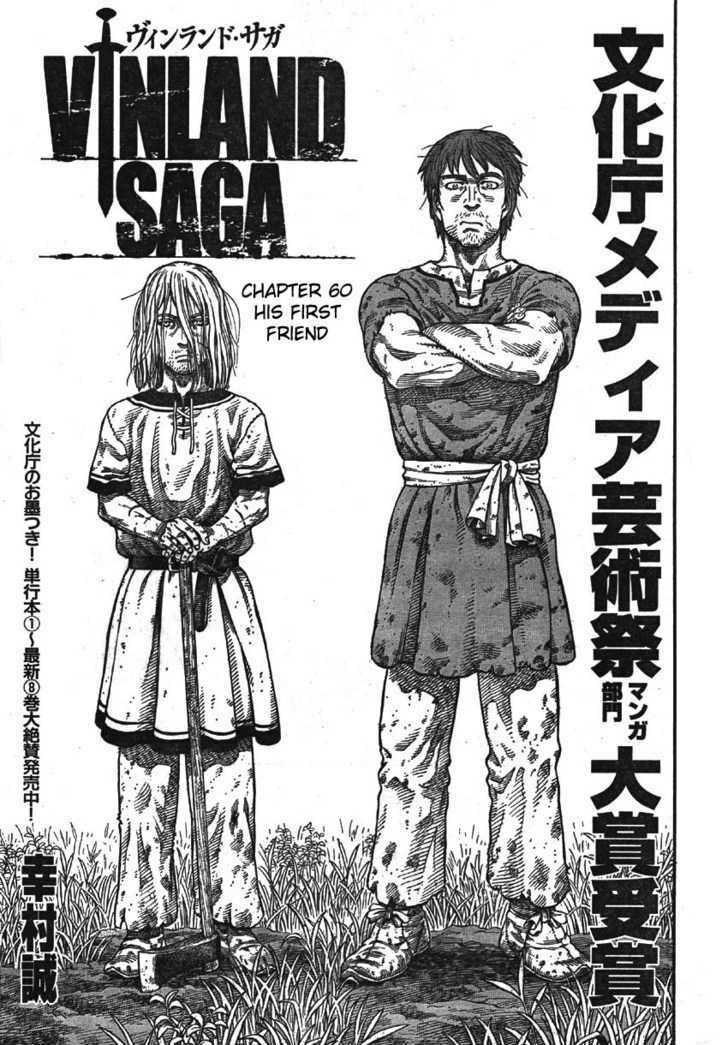 Alongside the trailer, MAPPA released a brand new key visual depicting the season’s core cast against the golden fields of Ketil’s farm.

Further, the studio revealed that the season would begin streaming January 2023 on Amazon Prime. 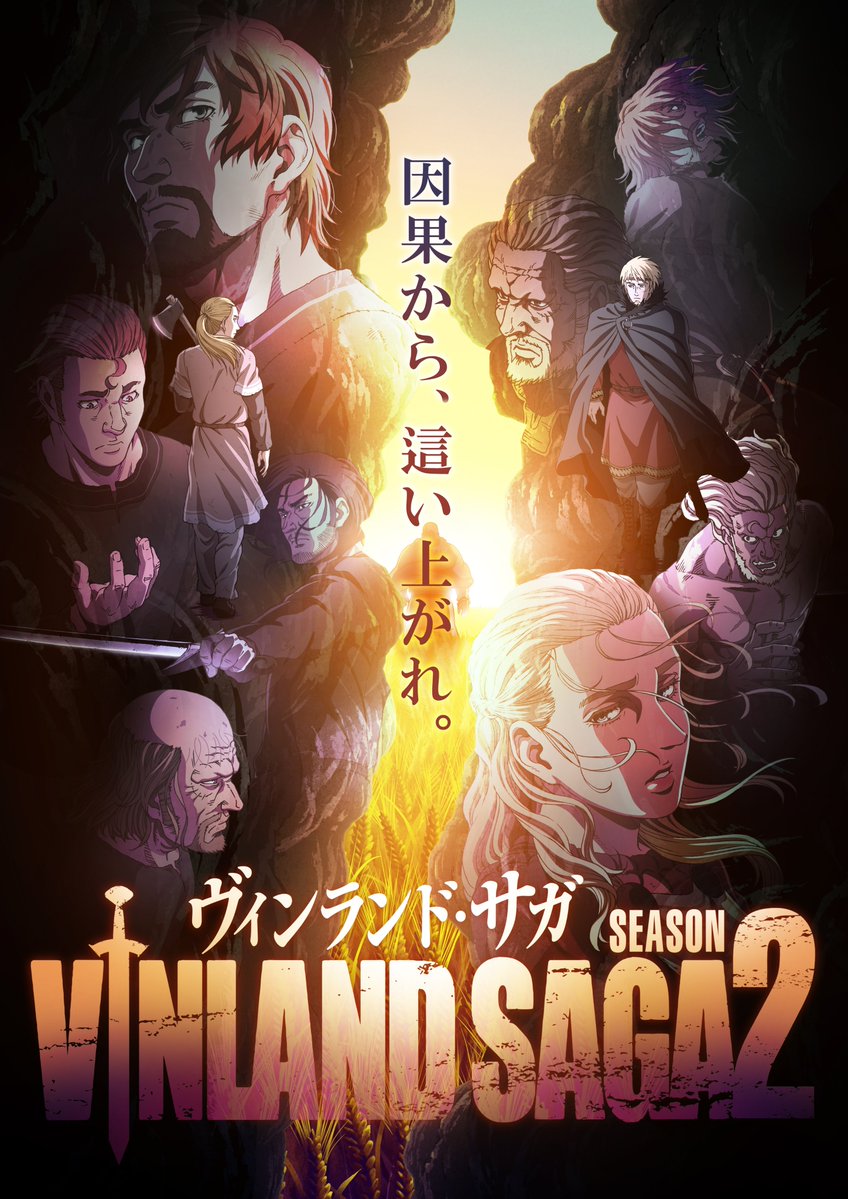 Are you excited for the second season of Vinland Saga’s anime adaptation? Let us know your thoughts on social media or in the comments down below!

Next: Crunchyroll 100% In On Mob Psycho 100, Announces Simulcast Of Upcoming Season 3