Upset with the recent repealing of Roe v. Wade, and in particular Clarence Thomas’ concurring opinion on the decision, former Archie Comics Sonic the Hedgehog author Ken Penders has written off the U.S. Supreme Court Justice as nothing more than an “Uncle Tom” for those who hold conservative beliefs. 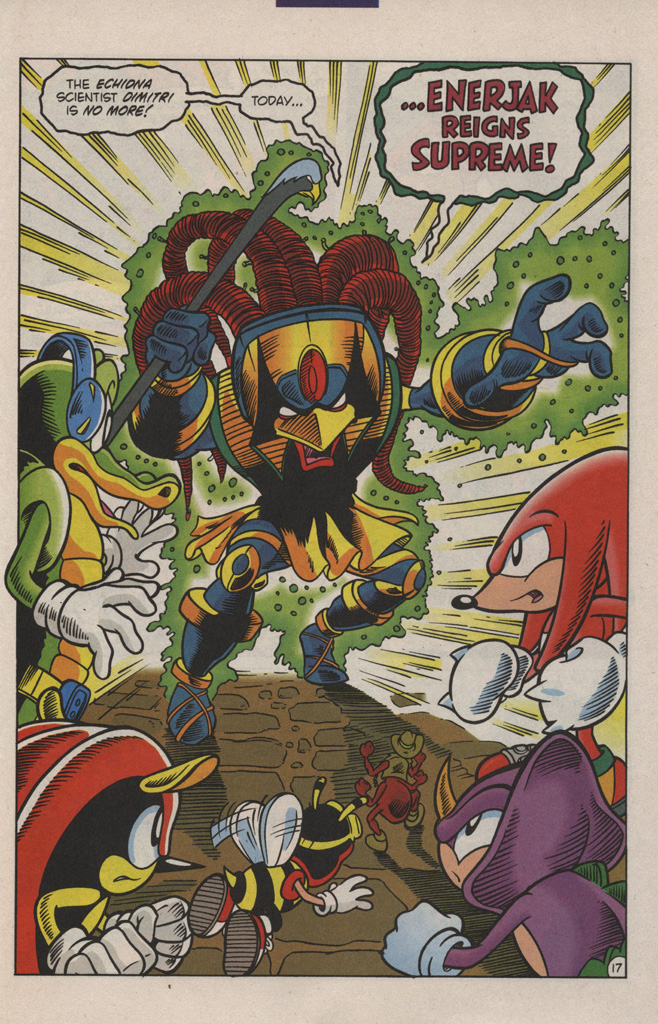 As announced on June 24th following a review of the Dobbs v. Jackson Women’s Health Organization legal case, in which the eponymous abortion clinic sued Mississippi State Department of Health officer Thomas E. Dobbs on the grounds that the state’s Gestational Age Act banning all abortions after 15 weeks was unconstitutional, the U.S. Supreme Court held by a 6-3 vote that “The Constitution does not confer a right to abortion; [Roe v. Wade] and [Planned Parenthood v. Casey] are overruled; and the authority to regulate abortion is returned to the people and their elected representatives”. 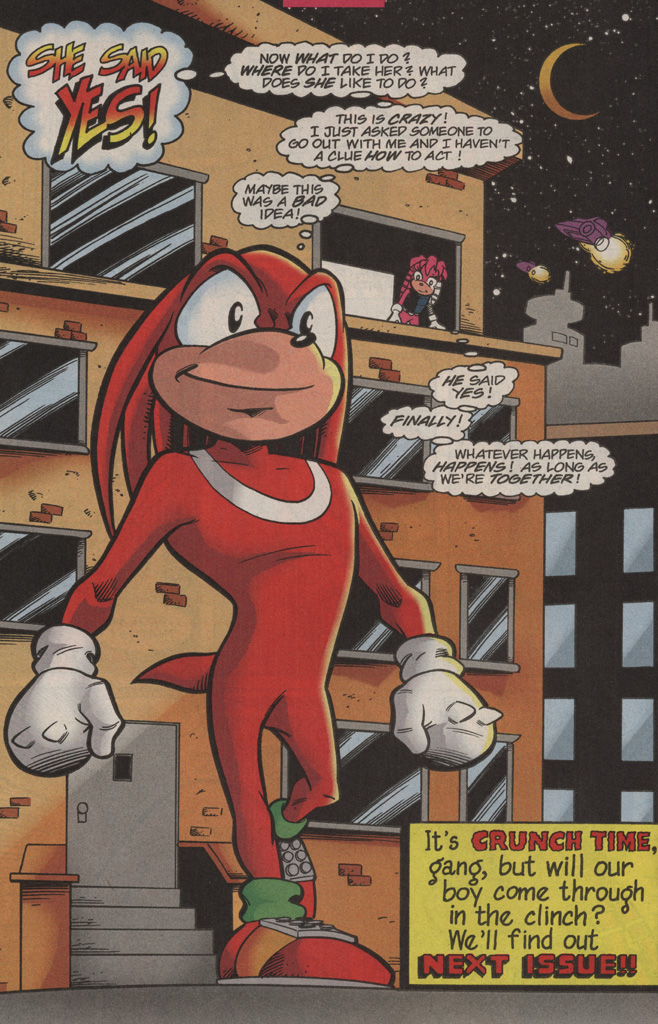 Delivering the opinion of the Court, Justice Alito wrote, “Roe’s defenders characterize the abortion right as similar to the rights recognized in past decisions involving matters such as intimate sexual relations, contraception, and marriage, but abortion is fundamentally different, as both Roe and Casey acknowledged, because it destroys what those decisions called ‘fetal life’ and what the law now before us describes as an ‘unborn human being.’”

Speaking to the argument that a Woman’s right to an abortion was secured under the privacy rights secured by the 14th Amendement’s Due Process Clause, which grants citizens protection against the invasion of their private lives by the government under the provision that no State shall “deprive any person of their liberty,” Thomas asserted in his concurrence that “the resolution of this case is thus straightforward. Because the Due Process Clause does not secure any substantive rights, it does not secure a right to abortion.” 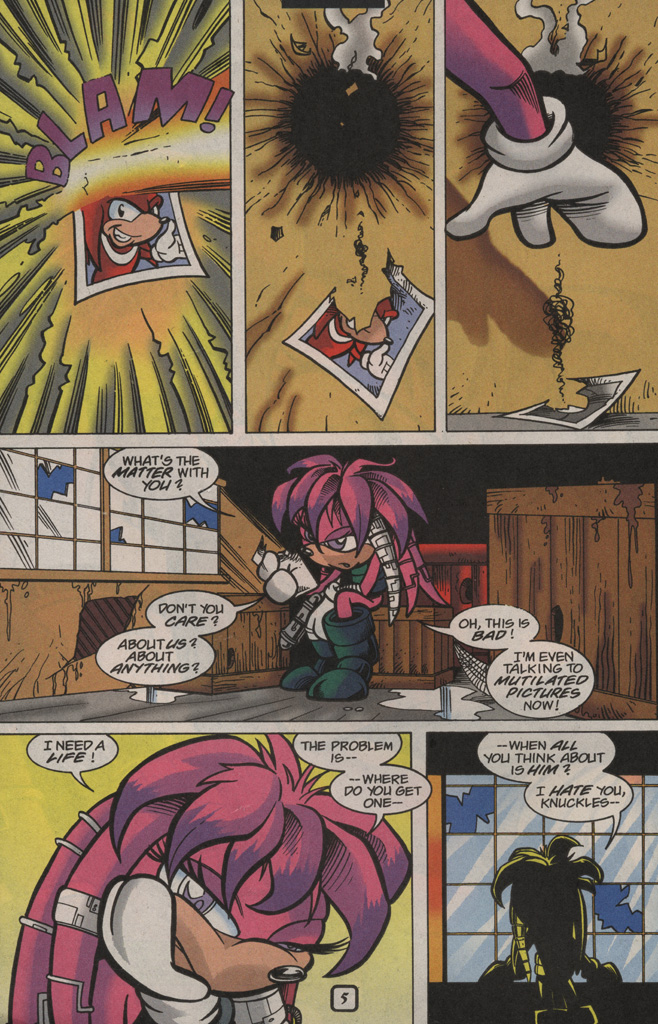 Source: Knuckles the Echidna Vol. 1 #26 “She Loves You… (and you know that can’t be bad!)” (1999), Archie Comics. Words by Ken Penders, art by Chris Allan, Manny Galan, Andrew Pepoy, and Frank Gagliardo.

Taking note of the many claims by supporters of Roe that the case’s overturning would lead to attacks on the rights granted to citizens by Griswold v. Connecticut (right of married persons to obtain contraceptives), Lawrence v. Texas (right to engage in private, consensual sexual acts, and Obergefell v. Hodges (right to same-sex marriage), Thomas then attempted to assure the concerned that these rights were “not at issue.”

“The Court’s abortion cases are unique, and no party has asked us to decide ‘whether our entire Fourteenth Amendment jurisprudence must be preserved or revised,’” said Justice Roberts. “Thus, I agree that ‘[n]othing in [the Court’s] opinion should be understood to cast doubt on precedents that do not concern abortion.’” 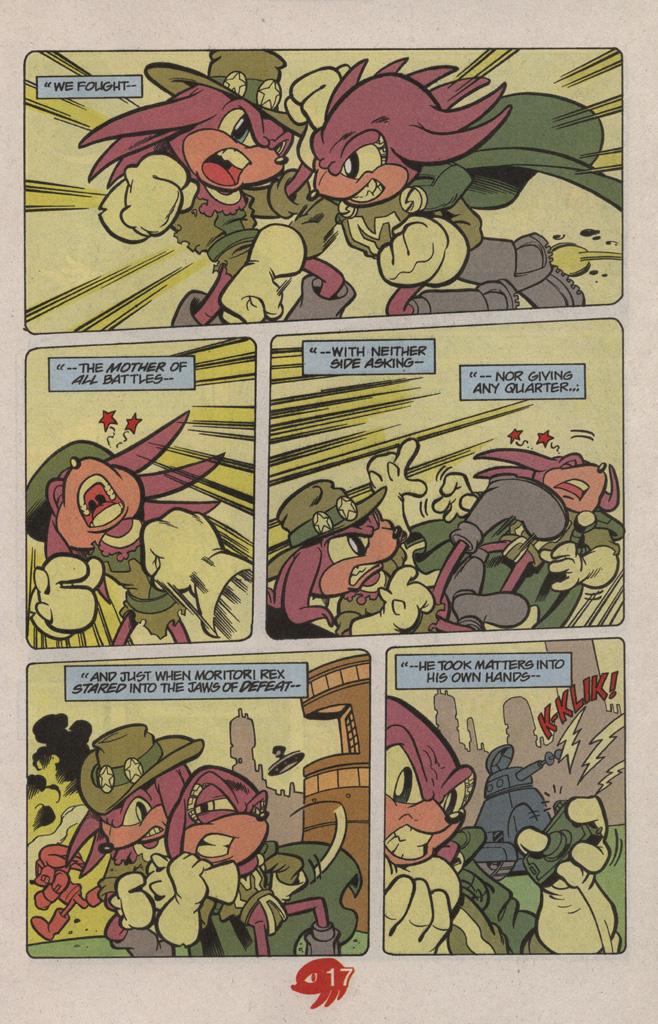 However, to that end, Thomas then opined, “For that reason, in future cases, we should reconsider all of this Court’s substantive due process precedents, including Griswold, Lawrence, and Obergefell,” arguing that “bBecause any substantive due process decision is ‘demonstrably erroneous,’ he continued, “we have a duty to ‘correct the error’ established in those precedents.”

“After overruling these demonstrably erroneous decisions, the question would remain whether other constitutional provisions guarantee the myriad rights that our substantive due process cases have generated,” he added. “For example, we could consider whether any of the rights announced in this Court’s substantive due process cases are “privileges or immunities of citizens of the United States” protected by the Fourteenth Amendment. Amdt.” 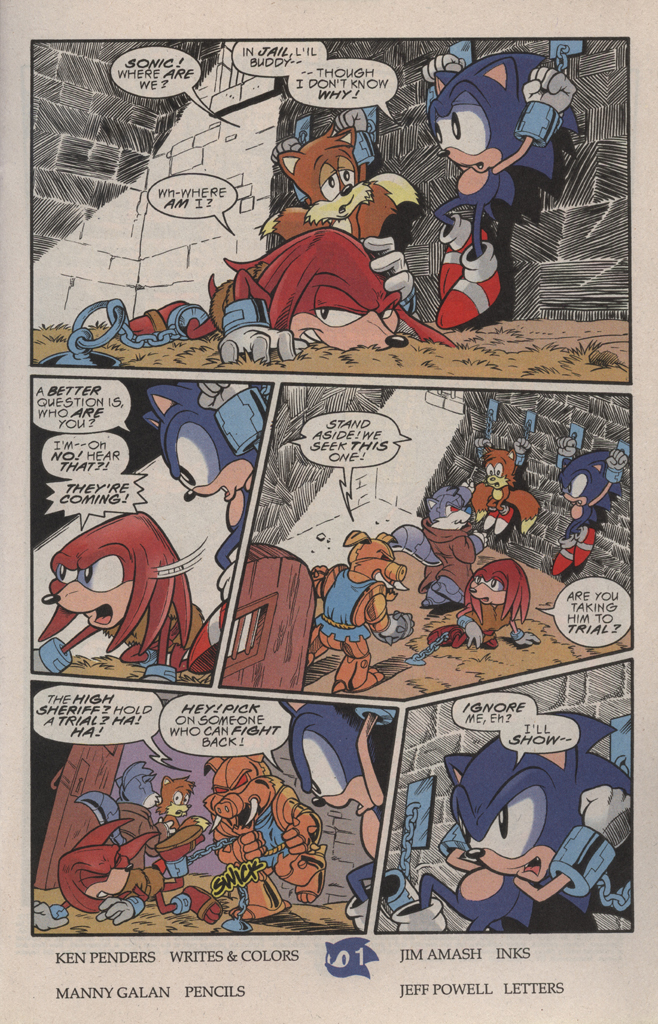 Though Thomas made no explicit reference to whether these reconsiderations would be done out of an effort to correct poor law or to rescind the respective rights, many leapt to take his opinion as an absolute declaration of war on these freedoms – including Penders.

“How screwed-up is Clarence Thomas’s interpretation of the Constitution, Original Intent & US Law?” he asked after the Court officially made public their decision. “George Washington & Thomas Jefferson would have him picking cotton on their plantations. He wouldn’t get anywhere near the Supreme Court except to clean the toilets.”

Receiving immediate backlash and accusations of racism to his post, Penders doubled down, pushing back against his critics, “In case anyone wants to claim I’m a racist for calling out Clarence Thomas for the Uncle Tom that he most certainly is, Thomas is making it clear how much he hates gay rights.”

“Sounds pretty bigoted to me,” he concluded.

The writer would later return to the subject three-days later.

Retweeting Marvel star Samuel L. Jackson’s tweet in which he asked “How’s Uncle Clarence feeling about Overturning Loving v Virginia??!!”, Penders added, “I think it’s a hoot seeing Sam the Man calling out Uncle Clarence for the dishonest criminal that he is. He’s right on point.”

Notably, in response to Thomas’ decision just days prior that “the Second and Fourteenth Amendments protect an individual’s rights to carry a handgun for self-defense outside the home”, striking down New York’s concealed carry restrictions, Penders inquired to his followers, “Shouldn’t Clarence Thomas’s vote only count as 3/5 of a vote if he goes by the Original Constitution? Just asking.” 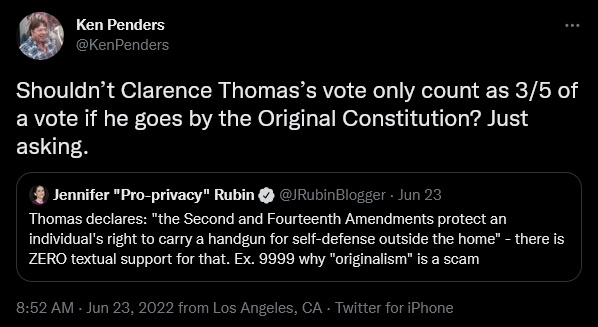 What do you make of Penders’ take on Justice Thomas? Let us know your thoughts on social media or in the comments down below!