A full-scale replica of Reva’s double-bladed ‘helicopter’ lightsaber, as wielded by the Inquisitor during the events of the Disney Plus Obi-Wan Kenobi series, has failed to meet its crowdfunding goal and left Hasbro with no choice but to scrap their plans for its release. 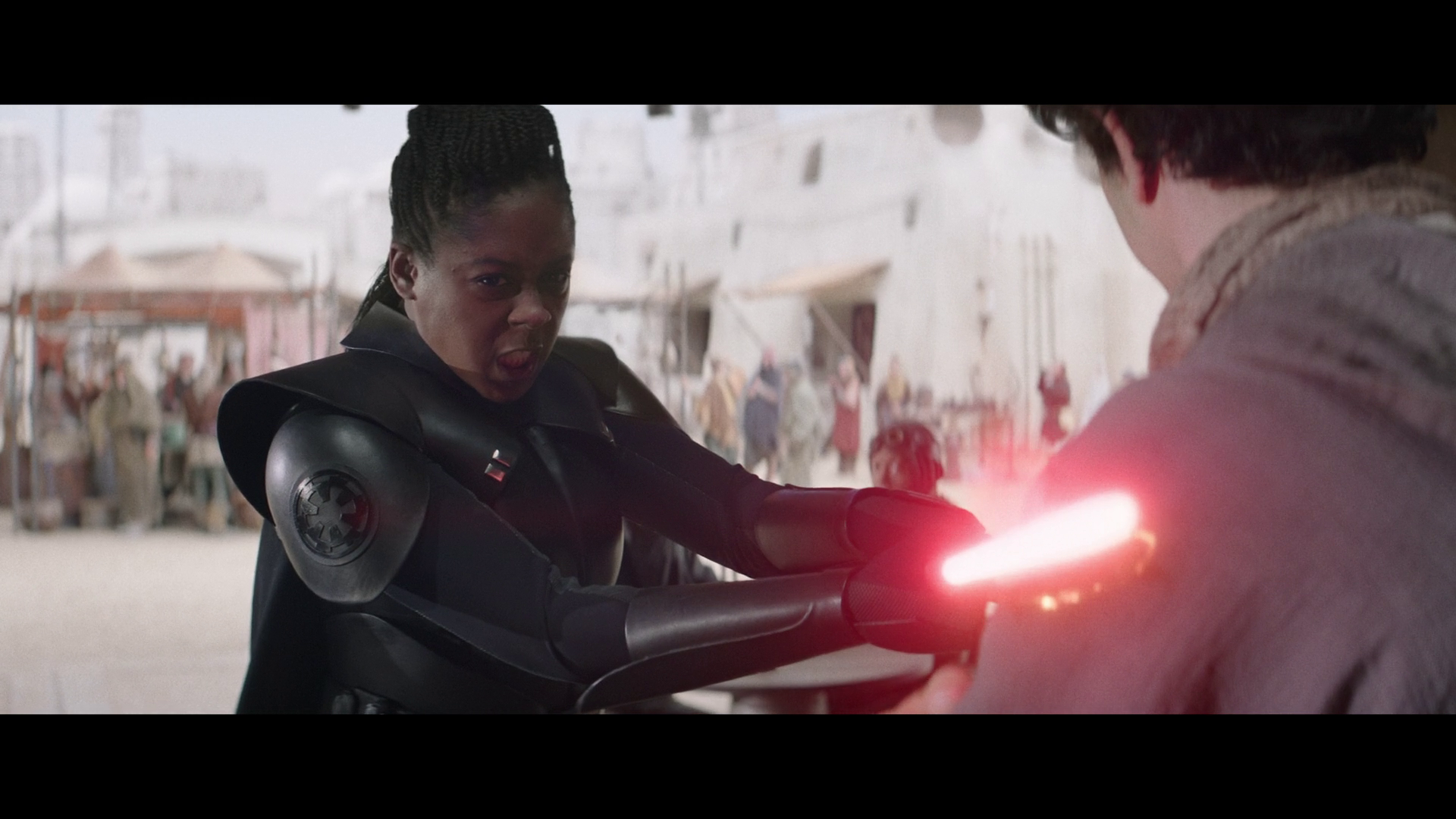 Heralded as the Black Series of replicas’ “first integrated double-bladed Force FX Elite LIGHTSABER”, Reva’s lightsaber was first made available for crowdfunding on May 27th via Hasbro’s official ‘Haslab’ crowdfunding platform with a price point of $499.99 and a minimum backer goal of 5,000 fans.

“When we first see her, it’s a flash of a black uniform … a bright red blade … and a ruthless expression,” teased Hasbro of the replica. “This Force-sensitive villain is more than a match for the Jedi—and is an unforgettable new character in Star Wars entertainment.” 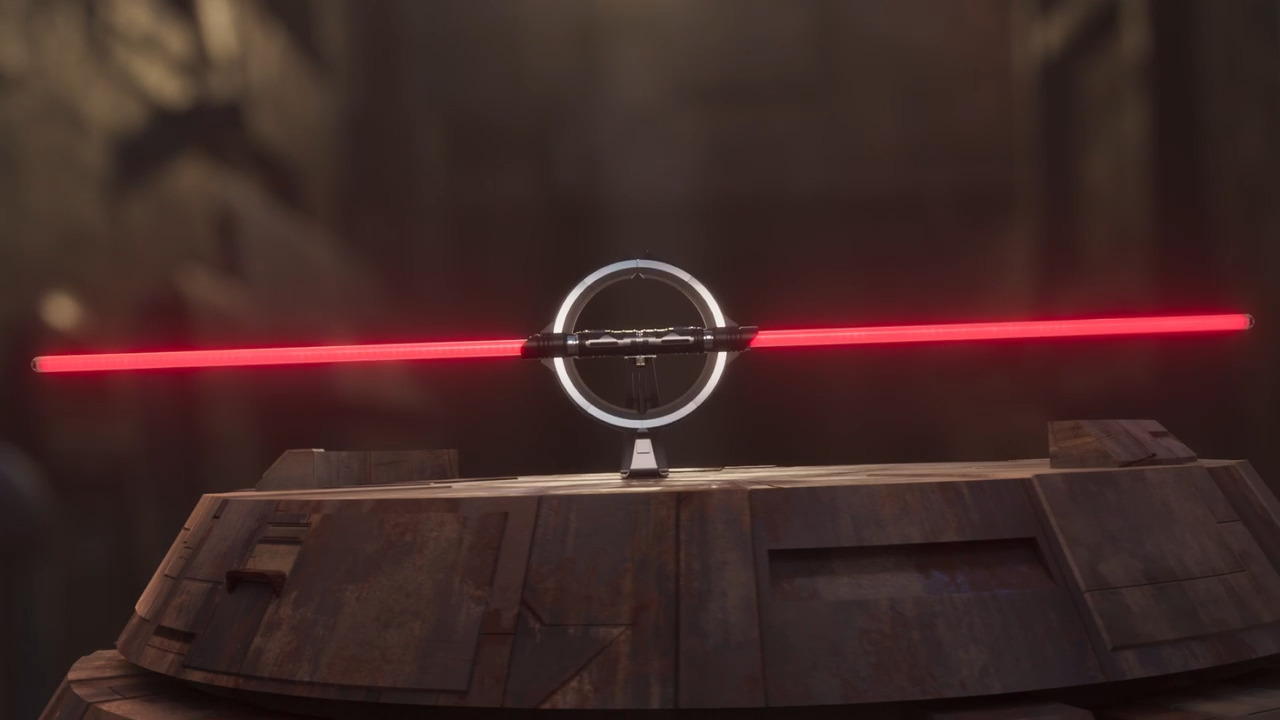 The toy manufacturer further exclaimed, “Now’s your chance to join the Inquisitors’ ranks with a lightsaber built to destroy even the most skillful remaining members of the Jedi Order™. With this premium roleplay item, you can gear up like an Inquisitor and relive key moments and thrilling battle scenes from Obi-Wan Kenobi—imagine the storytelling possibilities!”

“This roleplay item comes with the features you love—including progressive ignition, blaster deflect, battle clash effect, and more,” described Hasbro of the lightsaber. “With the coordinated attack technology in the hilt and both blades installed, LED animation and effect sequences play out across the entire 6.5 feet lightsaber! Battle the Jedi™ with both blades at play or just one—you’re in control.” 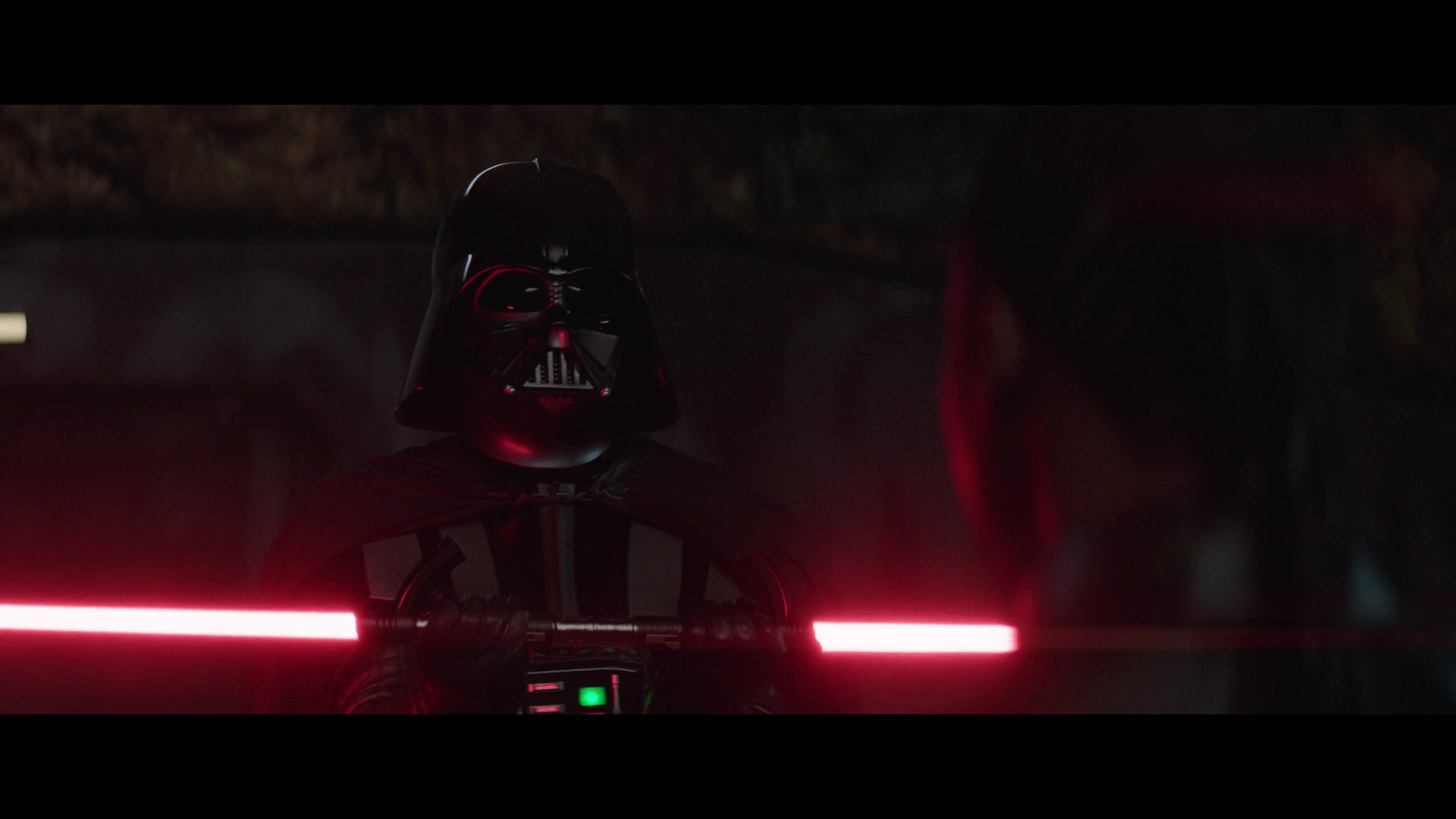 Unfortunately for the few fans of Reva’s character, the crowdfunding campaign failed to reach its end goal by more than half.

On July 11th, the roughly month-and-a-half-long campaign ended with only a total of 1,413 backers, leading Hasbro to announce that “Unfortunately, this project did not meet its backer goal and did not go into production.” 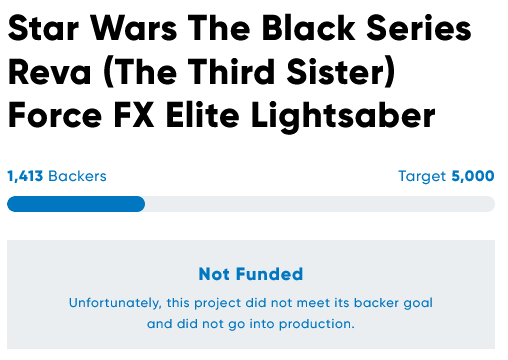 With its failure to secure proper funding, Reva’s lightsaber has become the second Haslab offering to fail to meet its fan demand milestones, the first being a Black Series release of the Rancor.

However, the Rancor fared much better than Reva’s lightsaber, ultimately failing to enter production by the significantly smaller margin of 467 backers, ending with a total of 8,533 supporters out of the figure’s target 9,000. 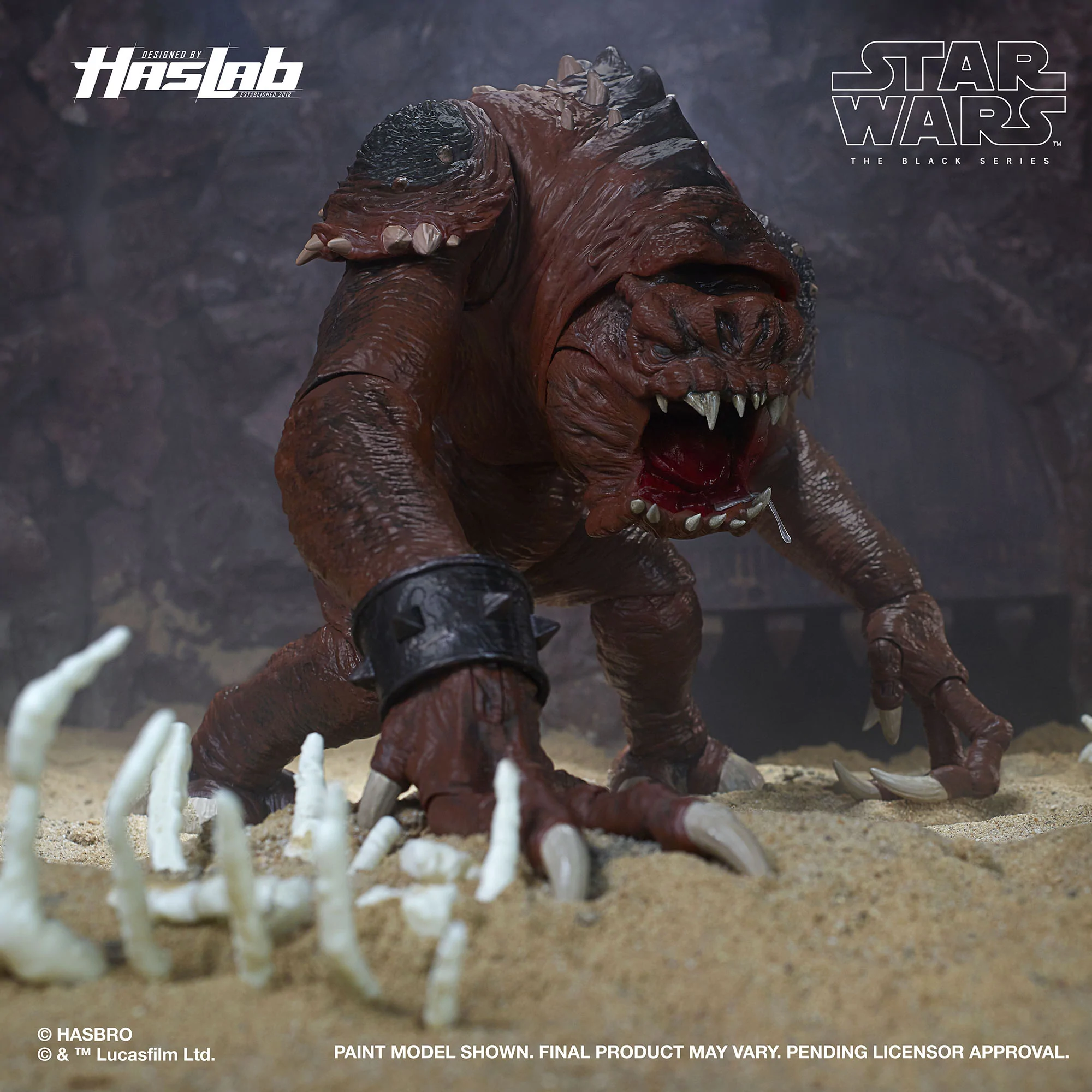 RELATED: Official Star Wars Twitter Account Gives Approval To Dog-Piling Of Fan Who Responded To Pride Month Cover By Asking For Franchise To Remain Apolitical: “There Are More Of Us”

Otherwise, every other Haslab offering, including high-end, large scale figures of Transformers’ Unicron, Marvel Comics’ Galactus, and a Vintage Collection release of Din Djarin’s Razor Crest, has not only secured their necessary funding, but impressively exceeded their initial goals. 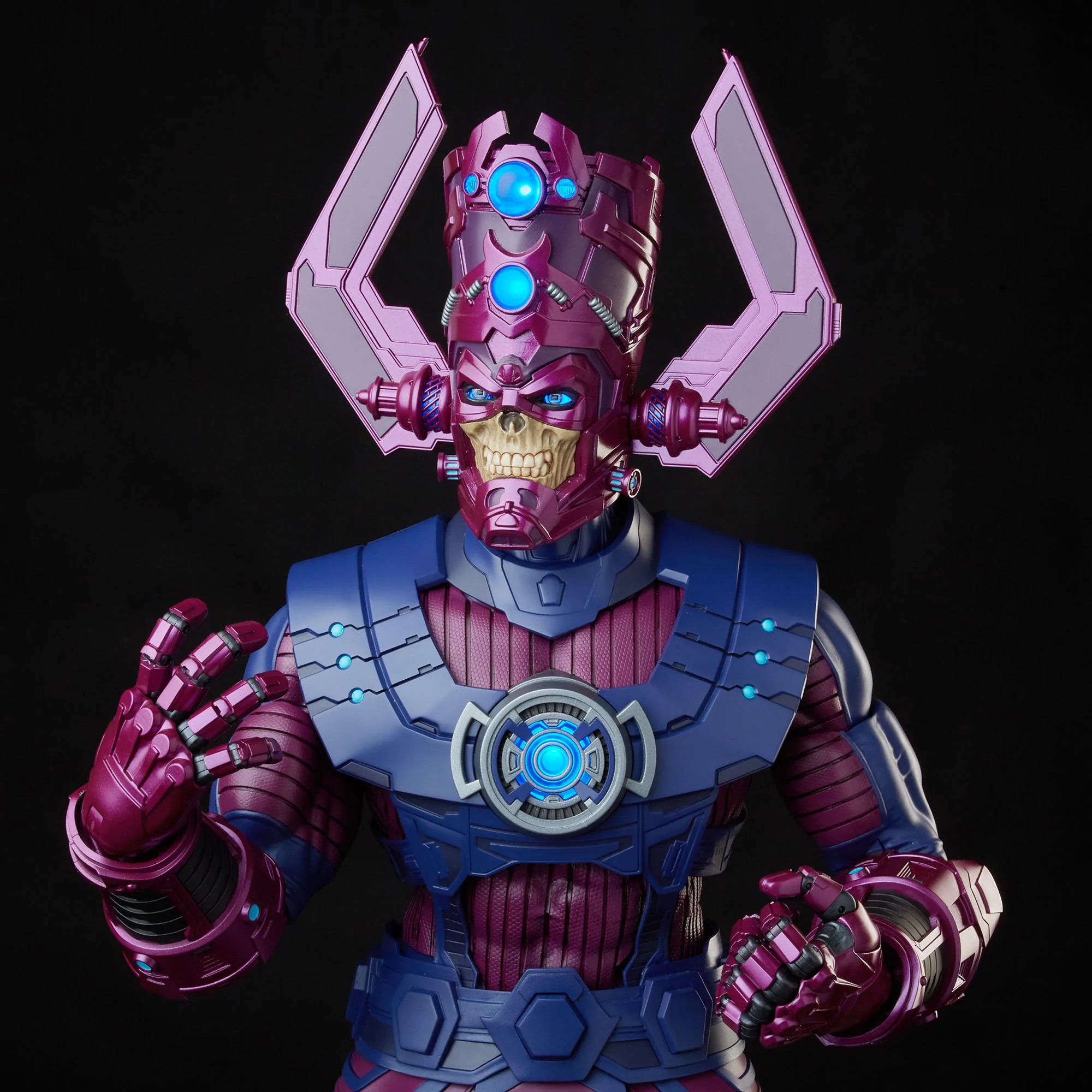 What do you make of the failure of Hasbro’s latest Star Wars crowdfunding campaign? Let us know your thoughts on social media or in the comments down below!