They finally did it. Bruce Wayne and Selina Kyle tied the knot Vegas-style after 12 issues and an annual in the pages of Batman/Catwoman #12 by Tom King and Clay Mann. 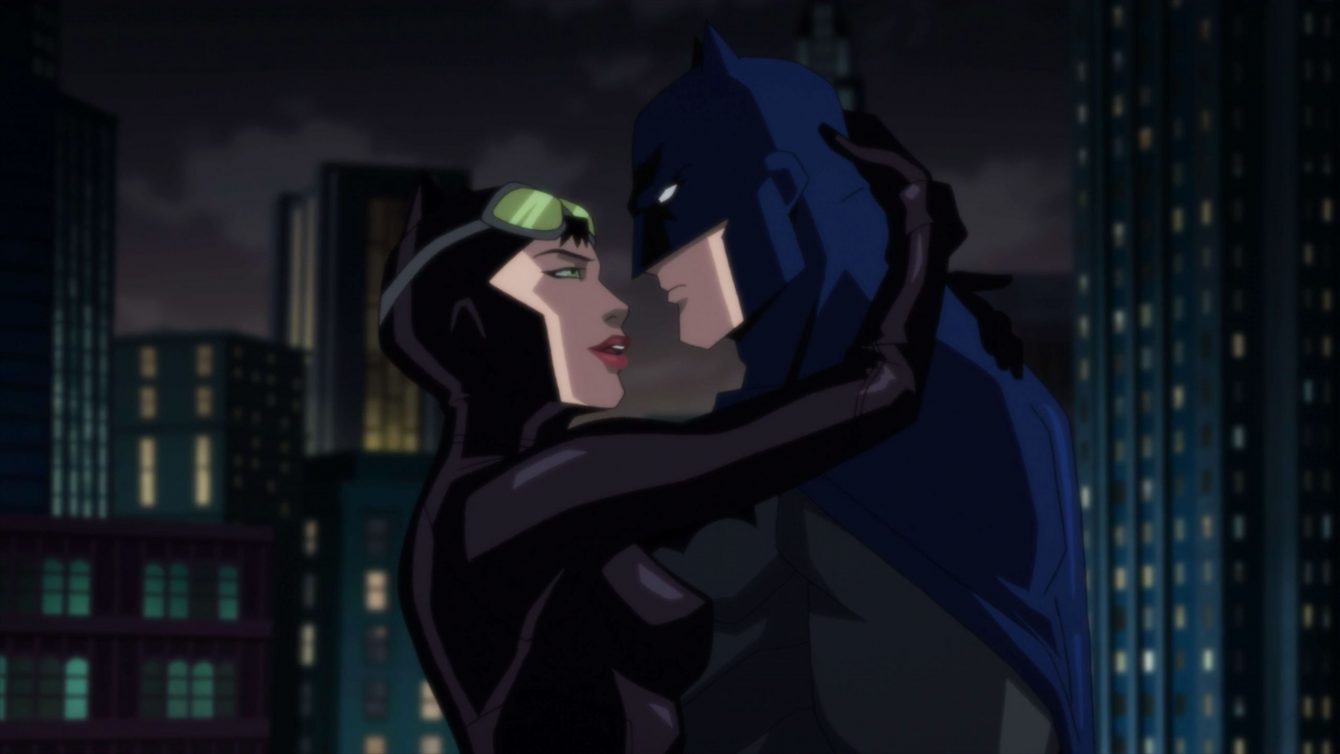 The ceremony took place in a themed wedding chapel where the inspiration was Gotham’s Guardian Knight as opposed to Elvis, and it couldn’t be more meta. The man officiating is dressed in an Adam West Batman costume and has a passing resemblance to Dark Knight co-creator Bob Kane.

There’s a blunder at the end when Christmas music plays instead of the intended riff on the ‘66 Batman theme that inserts “Mazel tov” over the catchy rhythm. Bad omen or no, an edition of the DC Blog’s “Gotham Gazette” column calls this a festive and “fun way to kick off happily ever after.” 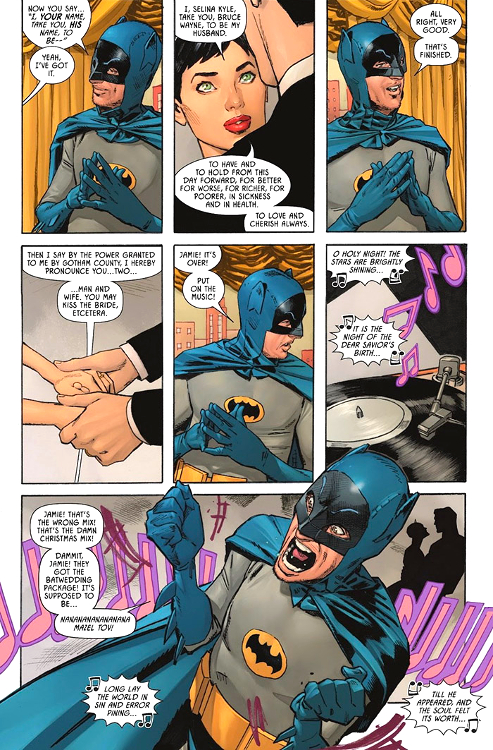 But the column also begs the salient question: “can Bruce and Selina ever truly have that?” In truth, we readers know that they can’t, and DC’s columnist makes this case. Not only are they too damaged individually, but Bruce also has his code under the cowl, while Selina has her secrets left over from her “old life.”

To be fair, it’s not like she ever gave it up – Selina holds onto parts of it because it gives her a sense of independence from her beau. Parts and secrets, no matter how volatile, such as sharing the occasional drink with The Joker. 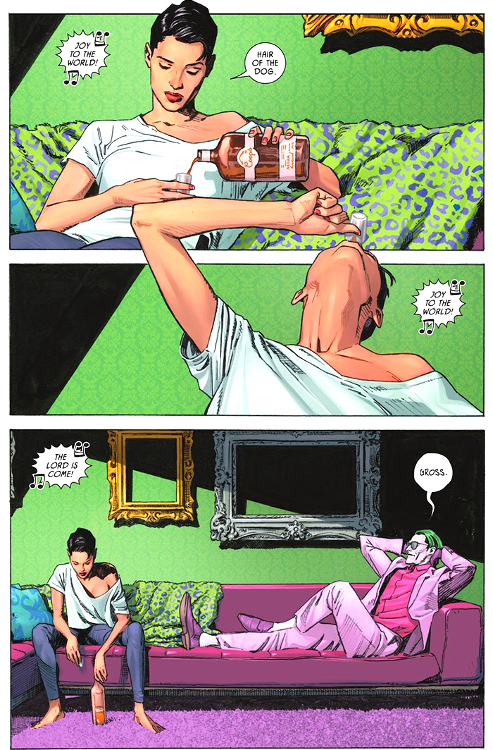 This twist makes no sense considering how unpredictable the Clown Prince is, especially when he would do anything to get at Batman, mentally and emotionally. That doesn’t stop the Cat and Clown from having casual moments like two old pals bewildered with life.

She thinks she can make up for this by not spilling Batman’s true identity to Joker, which he takes in stride. However, she won’t help hubby spare lives or aggravation and bring the genocidal Jester to justice either. 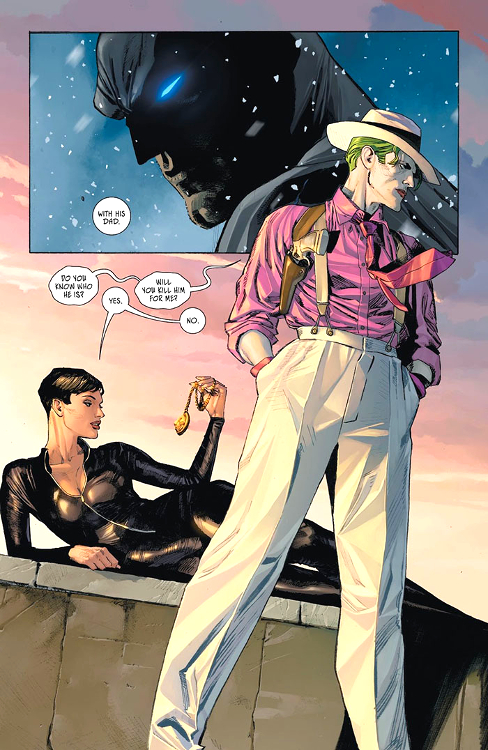 He’s not the only villain she is protecting either. We learn in this issue Selina knows The Phantasm – Andrea Beaumont – is still alive and leaves Bruce in the dark about her fate; not that it matters in the end.

We know how King’s Batman/Catwoman story ends, mostly since the narrative bounces around the past, present and future of the timeline. By issue twelve, Bruce dies and Selina decides to finally settle the score with The Joker. 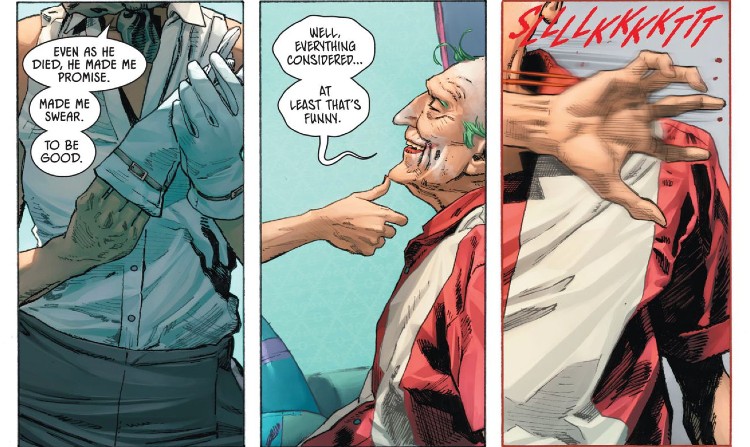 Long story short, she kills him, which she could’ve – maybe should’ve – done earlier, making the tawdry cat-and-mouse bickering with Bruce during the series over letting Joker remain free all the more pointless.

King seems to want everything all at once in every sort of way in this Black Label affair. The pot stays boiling, but the soap opera is more convoluted than it needs to be, no matter how engaging it is. 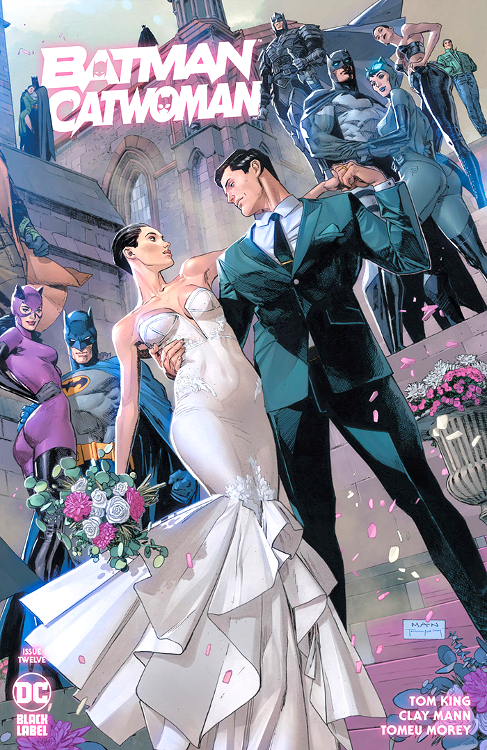 Catwoman sums things up with “This is who we are, you and me. Without costumes and gadgets and whips. After all they’ve done to us, this is what’s left. Bat and Cat. Two wounded animals. Who, in the midst of the hurt, managed to crawl to each other.”

Batman/Catwoman #12 is now on sale digitally and wherever books are sold.