Black Adam is not only the debut of Dwayne Johnson as the title character, but the blockbuster film is also the grand entrance for Atom Smasher and the Justice Society of America to the big screen.

There will be some changes to the characters on the team, not limited to Hawkman who is now BIPOC due to being portrayed by Aldis Hodge, and that goes for the goliath Smasher as well.

Noah Centineo, once the frontrunner for He-Man who now plays the mass-altering metahuman, explained to Screen Rant during the Warner Bros. Press Line at San Diego Comic-Con how his Atom Smasher will be different from what readers have seen in the past.

The main thing is Centineo plays him when he’s starting out as a superhero and not a fully mature adult. “In this movie! In the comic books, he’s a fully formed superhero, right? He’s an adult. In this movie, though, he’s kind of a young man. He’s a young metahuman that gets to, for the first time, take that first step into what it means to be a superhero,” said the actor.

But Atom Smasher won’t be new to the world of heroes, villains, and superpowers. “He comes from a pedigree of superheroes, and his grandfather was actually a super villain, but not by choice. He was kind of forced into it, and he did rectify it in the end,” Centineo added.

The grandfather he’s talking about is Cyclotron, a Roy Thomas character reworked from a single Golden Age appearance and reintroduced in All-Star Squadron #21 (1983) as a pawn of Ultra-Humanite. Experiments in radiation would give him powers he’d pass down to his grandson Albert Rothstein — a lad who has yet to prove himself. 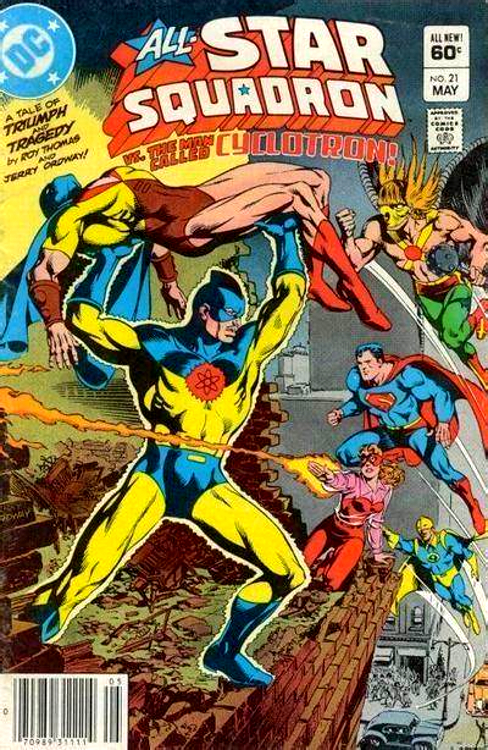 “With all of that familial history, he feels a driving force to prove himself; to find his way and his path and to do good and establish himself as a good person and a superhero. You get to really see that transitional phase, which I don’t think you get to see often,” Centineo said.

He also added at the end, “And it’s the same with Maxine Hunkel, who is played by Quintessa [Swindell].” Quintessa Swindell plays Cyclone, the wind-riding granddaughter of Ma Hunkel, the original Red Tornado.

It is still unknown whether she will be a joke character wearing a pot on her head for cheap laughs — or transgender as one rumor claimed — but Centineo confirms Ma exists in Black Adam and has a legacy to live up to.

In prior interviews Centineo revealed Atom Smasher is on his first mission in the storyline and sees differing ways of fighting crime from Hawkman and Black Adam. The former recruits him, and Cyclone, to be members of the new JSA on the hunt for the reawakened Adam. As the trailer suggests, the two sides duke it out though the magical antihero may join them in the end.

If the satanic villain Sabbac (Marwan Kenzari) proves to be as formidable and gigantic as some leaks suggest, both the JSA and Black Adam will need all the help they can get.

Black Adam has a release date of Oct. 21st. If Centineo gives you renewed faith in how the film will treat the source material, or not, let us know in the comments.