Woke actress Jessica Chastain is the latest Hollywood celebrity to throw their support behind Ukraine, flying to the Eastern European nation amidst an ongoing Russian invasion, and taking time to shoot some pictures with President Volodymyr Zelensky. 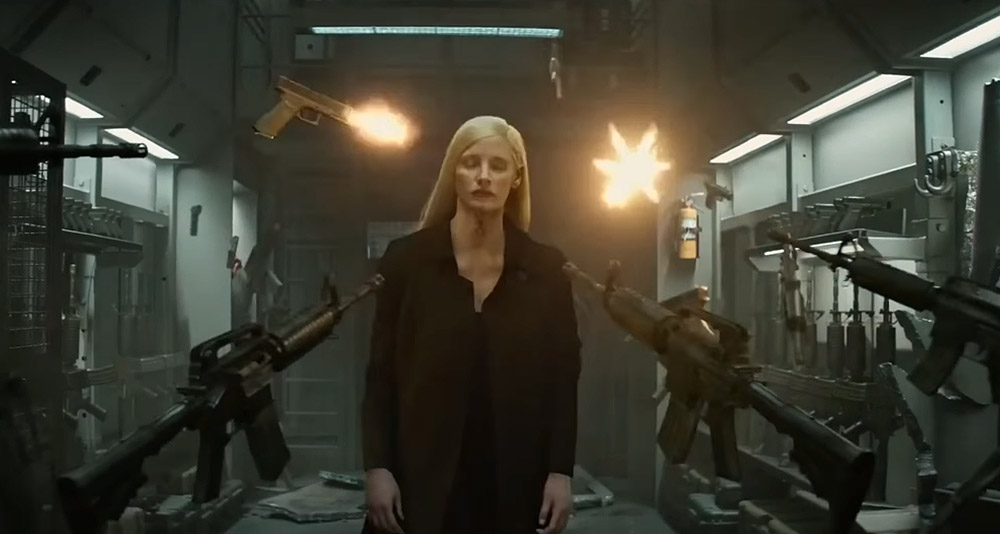 Pictures of the meeting were shared by Zelensky himself, who took to his personal Instagram account to thank the actress for her support, declaring that the support from Hollywood celebrities is “extremely valuable.”

“American actress Jessica Chastain is in Ukraine today,” wrote the Ukrainian president on Sunday, adding, “For us, such visits of famous people are extremely valuable.” Zelensky, looking visibly elated by Chastain’s visit, went on, “Thanks to this, the world will hear, know and understand the truth about what is happening in our country even more.”

“You’re incredibly brave and very strong. You know, Ukrainian people are very strong. ” said Chastain during her meeting with the Ukrainian president. Zelensky then proceeded to thank the actress throwing her support behind Ukraine. “Thank you very much for coming. And today is very important for us in Ukraine. It is important for us that the topic of Ukraine is not forgotten.”

“For us, this is the most that certain people, the very famous people, can do today,” the president went on. “We know you, you are a very famous person in Ukraine. [We need the topic of Ukraine not to fade away in the world.”

'It is important for us that the topic of Ukraine is not forgotten' — Pres. Volodymyr Zelenskyy welcomed actor Jessica Chastain in Kyiv, for a meeting he hoped would bring renewed awareness to the ongoing war in Ukraine pic.twitter.com/feCYCeWLGE

He elaborated, “Thanks to this, we have the opportunity to influence so that people understand the truth of what is happening here, and they can help us. And the question is not only about weapons; weapons are one story. It is on the battlefield.”

“But there is a very large deficit of humanitarian aid, of medical assistance,” Ukrainian President Volodymyr Zelensky concluded, presumably forgetting that in May of this year the Biden administration signed a $40 billion aid package for Ukraine. 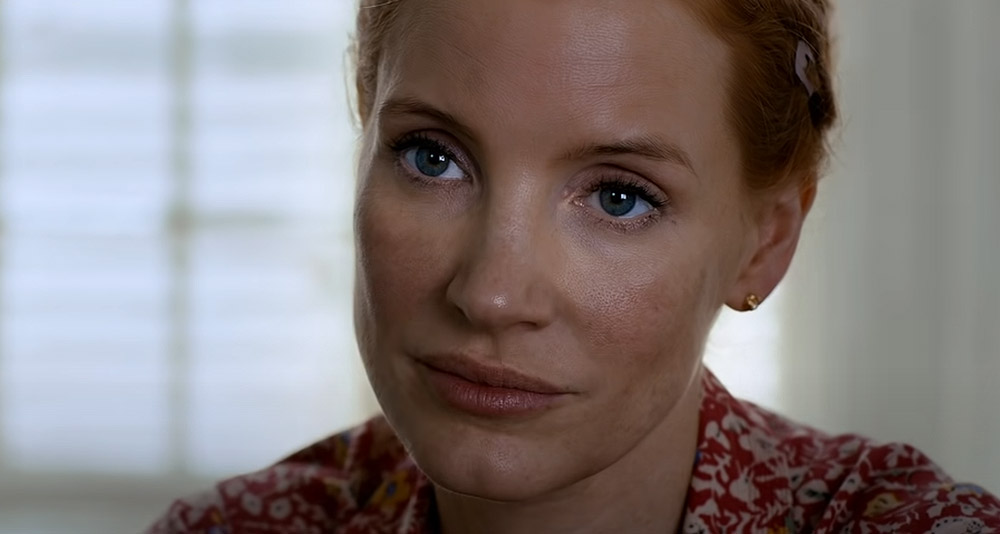 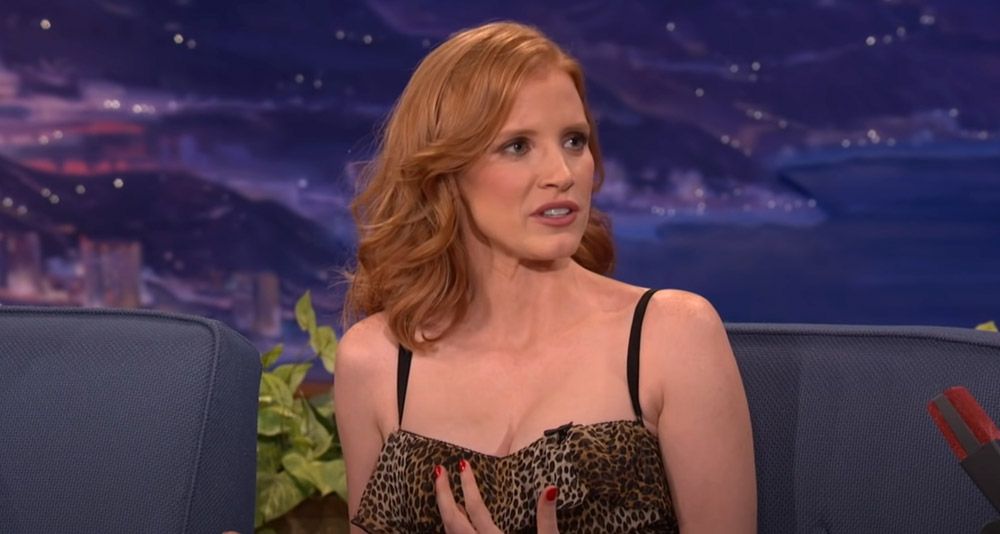 A firm believer in supporting “the current thing,” Jessica Chastain has unapologetically advocated for the defunding of the police following the death of George Floyd. “Charges have been set but now is not the time for silence,” she wrote at the time. “Now is the time to take action. I am horrified, embarrassed, and angered after witnessing what took place earlier this week.”

She went on, “We must not let this be swept under the rug. We must use our voices and make noise. This is not over. I love you all,” encouraging her followers to sign a petition that specifically demanded for the police officers involved in the death of Floyd to be banned, stripped from their pensions, and charged with murder. 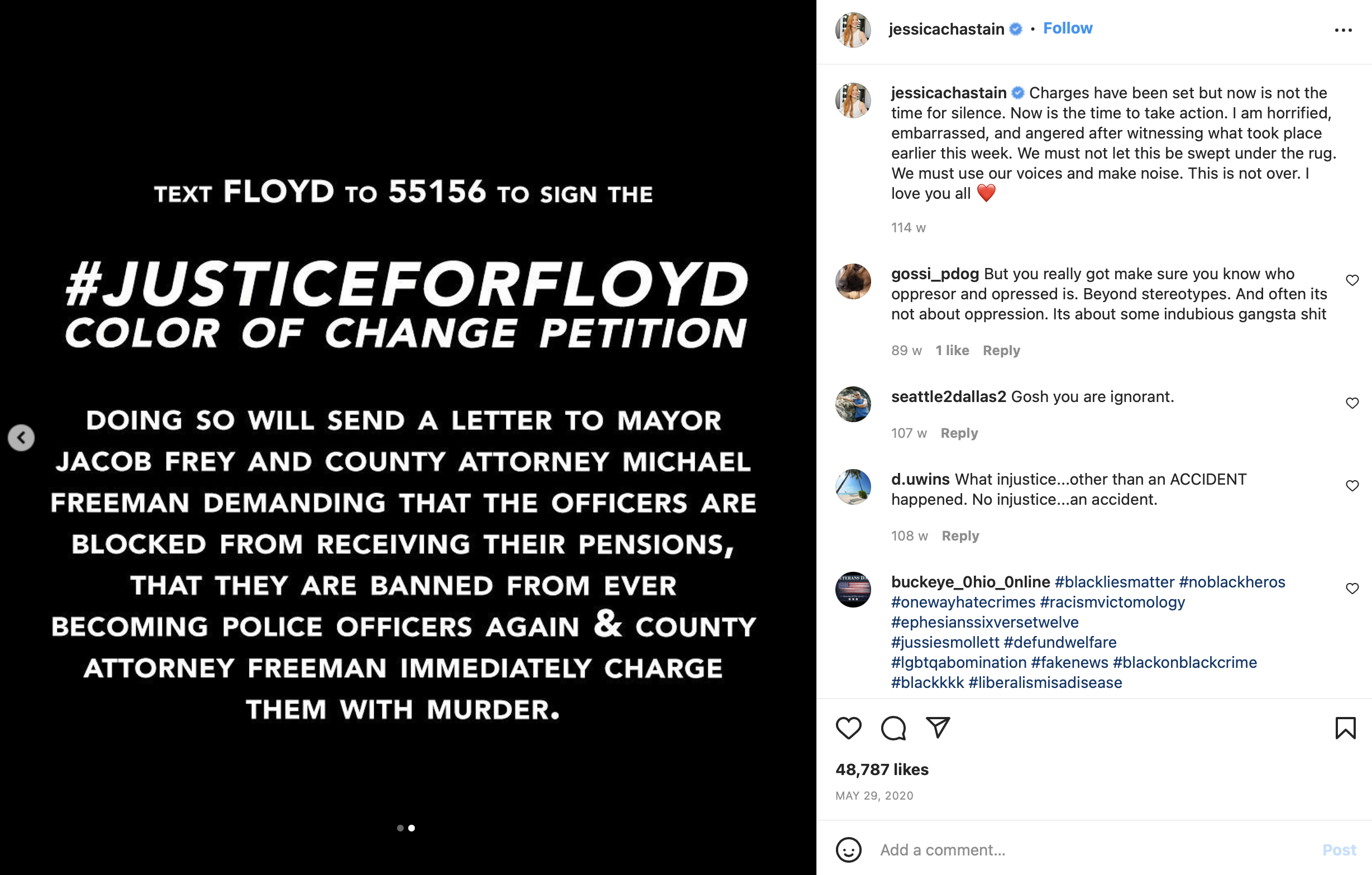 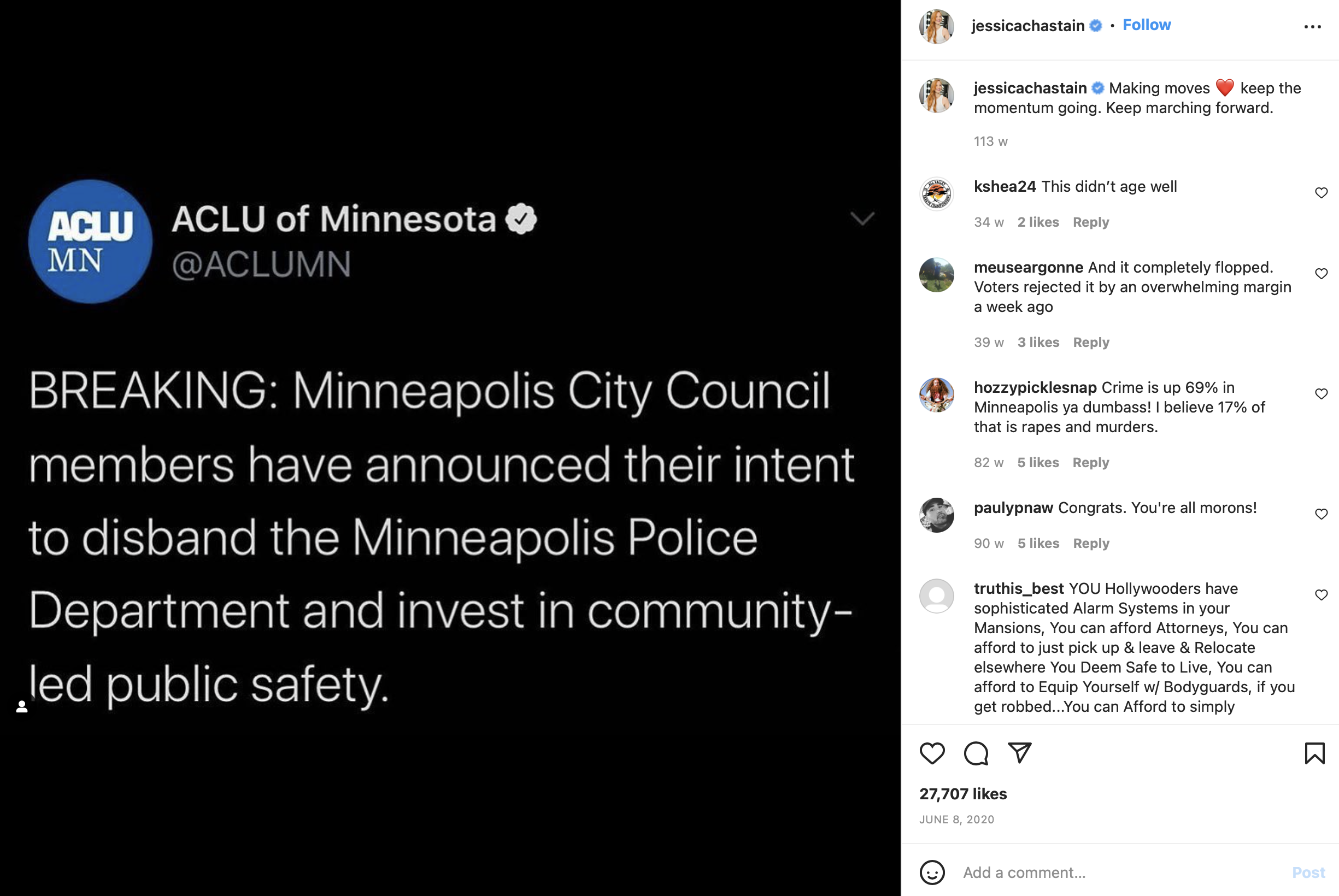 Chastain would spew more inflammatory comments just a few weeks after advocating for the defunding of the police, taking to social media to express her disdain for the monument of the 26th President of the United States, Theodore Roosevelt.

“Out with the old… in with the BETTER,” the actress said, unceremoniously sharing a picture of herself giving a fairly distasteful thumbs down to Roosevelt’s monument in front of the New York Museum of Natural History. 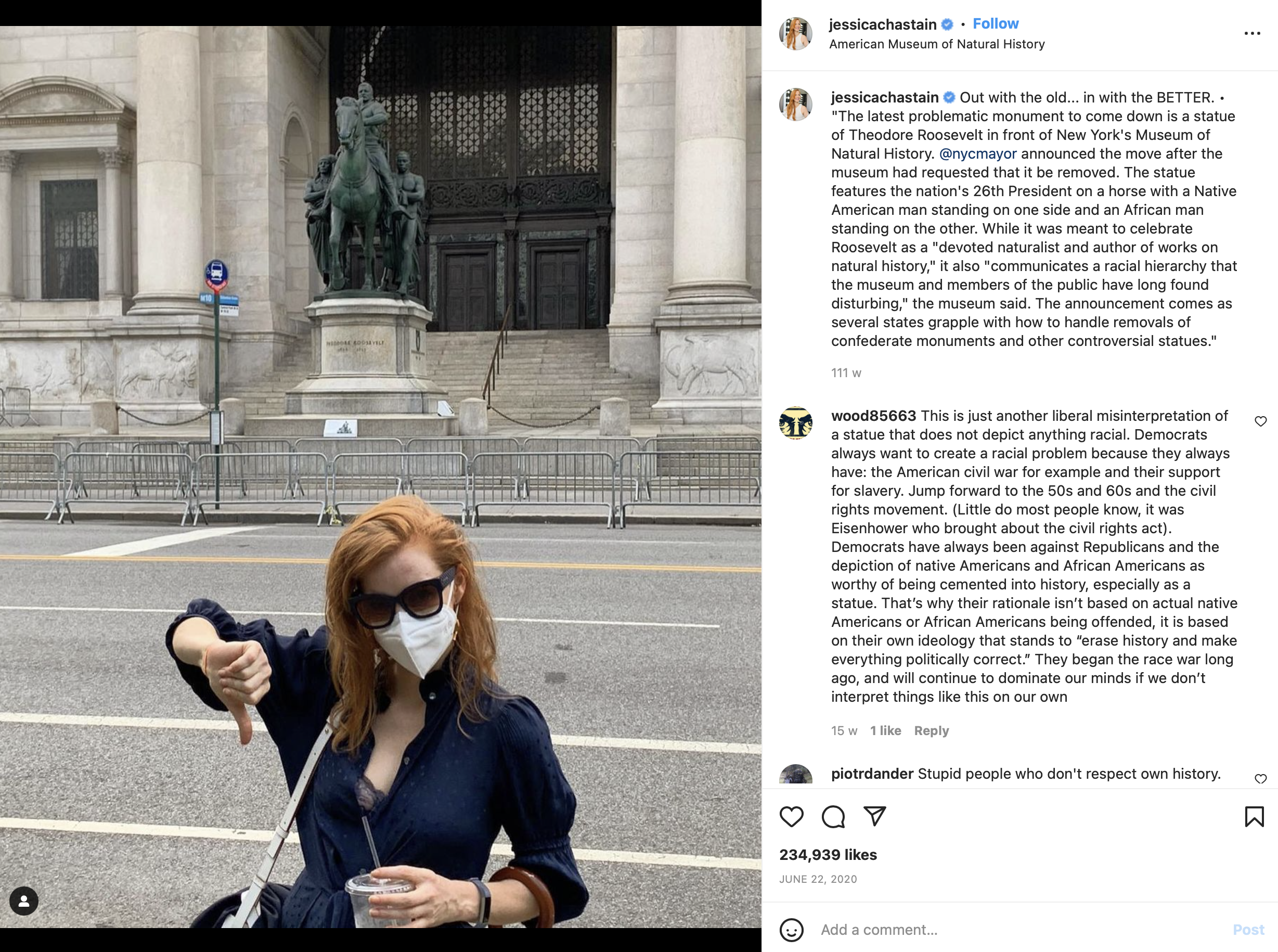 “My vaccine time has finally come!” a remarkably excited Chastain wrote as the first wave of COVID-19 vaccines rolled out. “This is so much more than just a shot in the arm… it’s our way to fight back against COVID, protect ourselves and keep those around us safe and healthy.”

She added, “I believe in science! If we listen to the experts, life as we knew it is just around the corner,” as the actress shared a picture of herself virtue signaling over the fact that she had been jabbed. 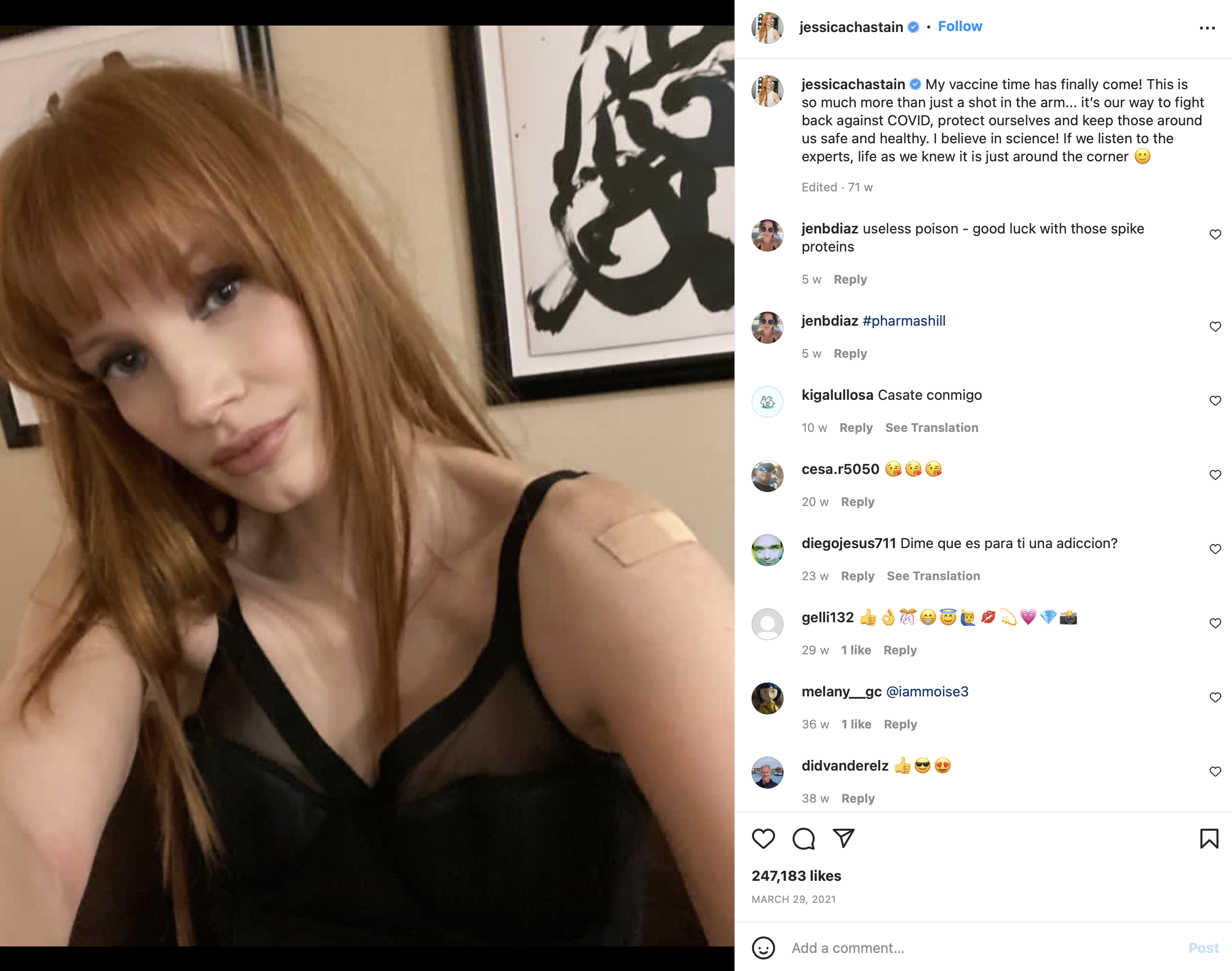 More recently, when the news about Ukraine being invaded by Russia started doing the rounds earlier this year, the woke actress wasted no time making it all about herself, expressing her support by sharing a picture that saw Chastain wearing an attire displaying the colours of the Eastern European country. 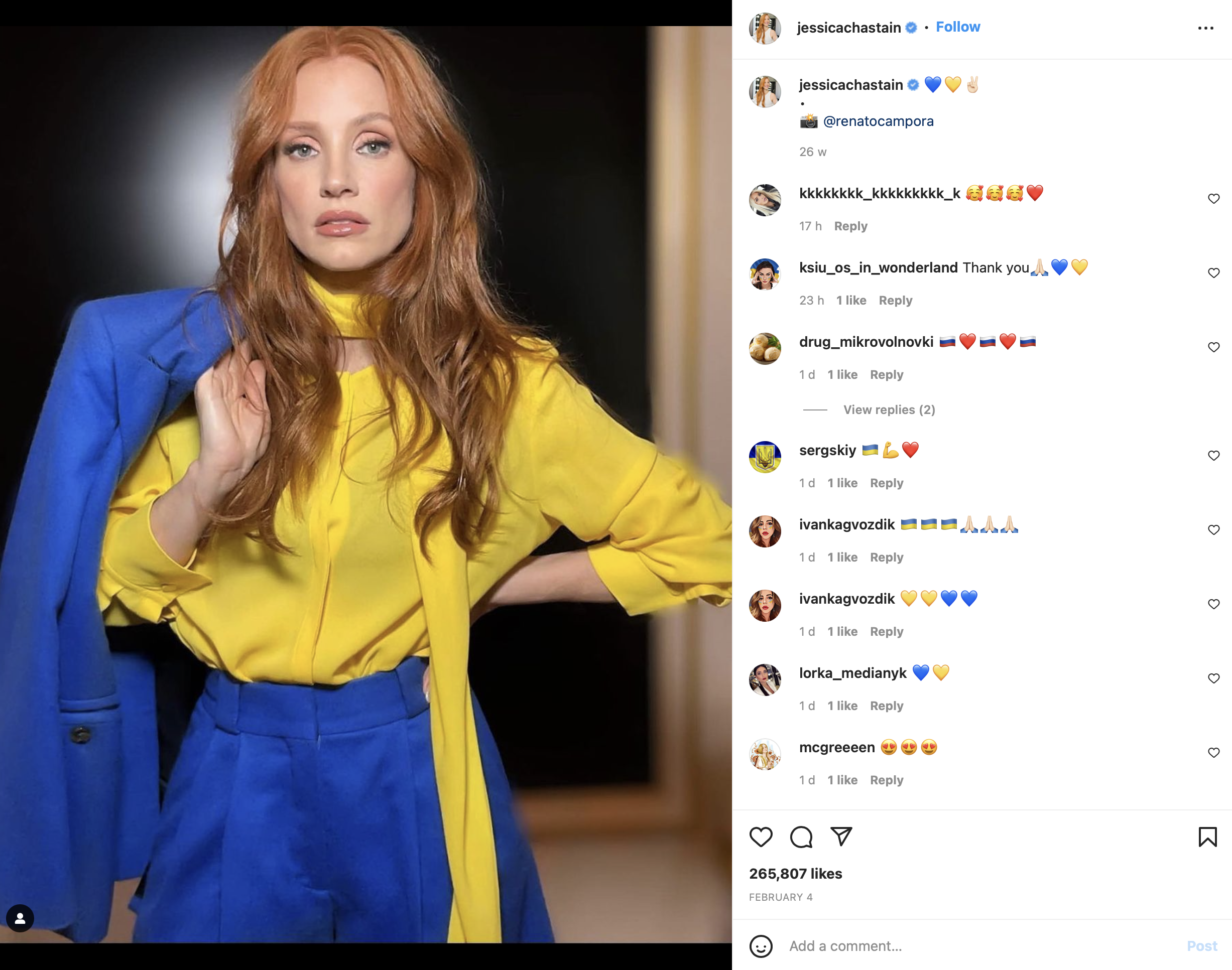 While Chastain’s post may have been tacky, it isn’t like President Zelensky is doing any better. A few weeks ago, the Ukrainian president made headlines after doing a questionable photoshoot for Vogue Magazine alongside his wife, Olena Zelenska, in what was widely perceived as a gigantic slap in the face of millions of American taxpayers, as well as the very same Ukrainian people they claim to represent. 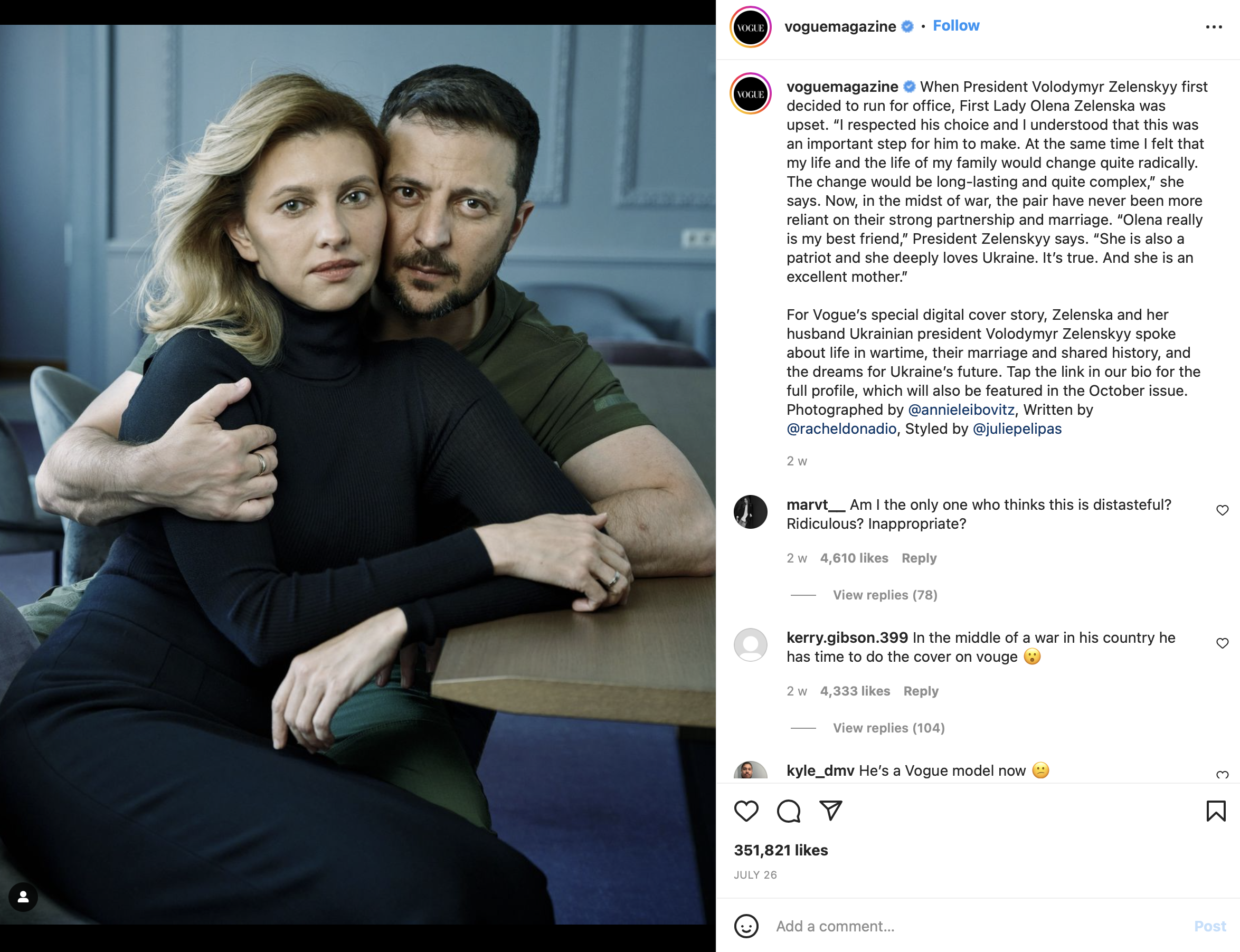 What do you make of Chastain’s meeting with Zelensky? Let us know your thoughts in the comments section down below, or on social media.