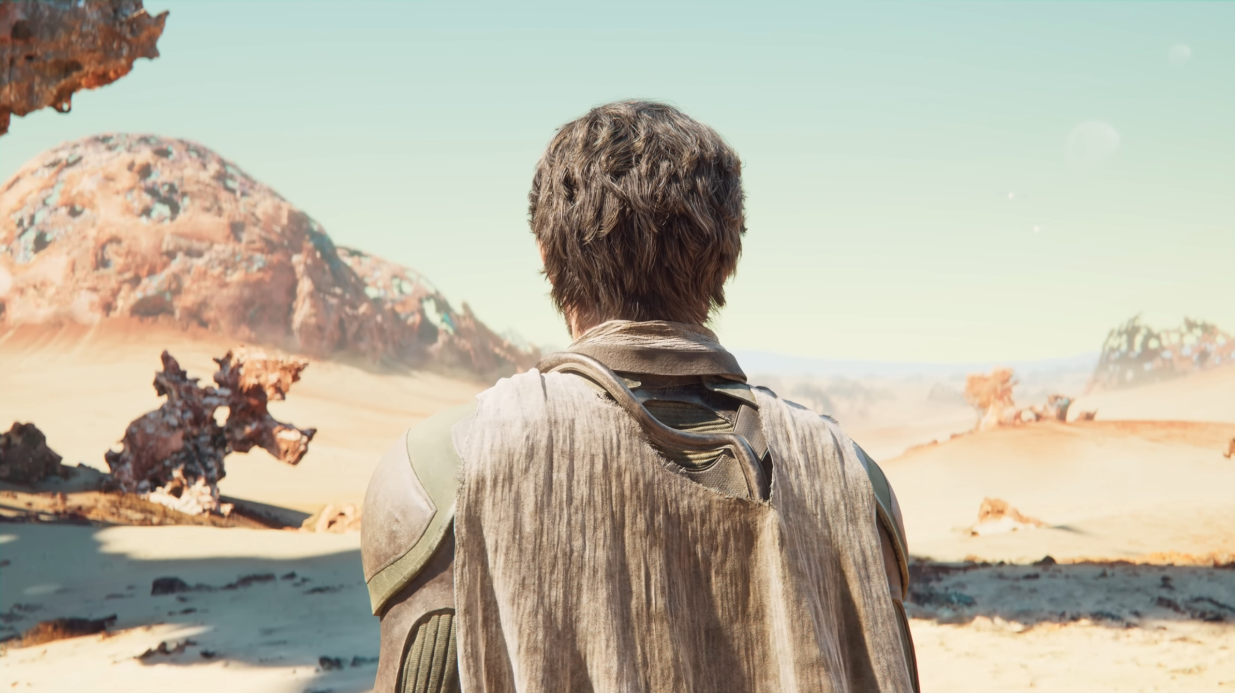 Announced during the recent Gamescom Opening Night Live 2022 presentation, Funcom explained in an official press release that Dune: Awakening “combines the grittiness and creativity of survival games with the social interactivity of large-scale, persistent multiplayer games to create a unique and ambitious Open World Survival MMO.”

Further, the developers noted that the game would not be set within the exact continuities of any previous Dune books or adaptation, but rather  “takes inspiration from both Frank Herbert’s novels and Denis Villeneuve’s Academy Award-winning film while exploring exciting new possibilities in the franchise.” 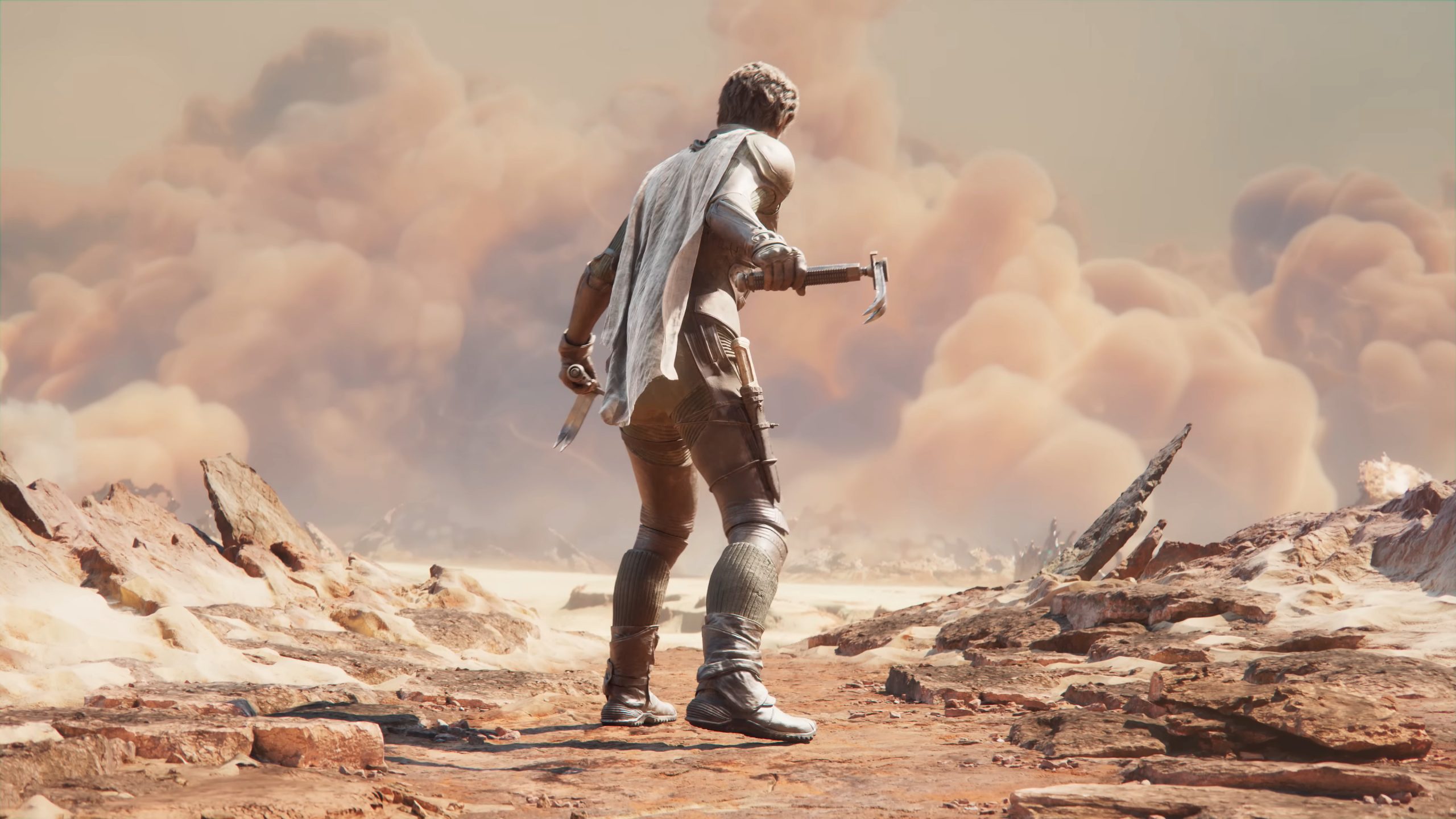 Set on the world of Arrakis, Dune: Awakening will see players ” “head into unmapped sectors and be the first to discover secrets and riches before the coriolis storms once again shift the sands and alter the landscape, narrowly escape colossal sandworms, build your home from shelter to mighty base, and traverse the dunes in iconic vehicles from the universe.” 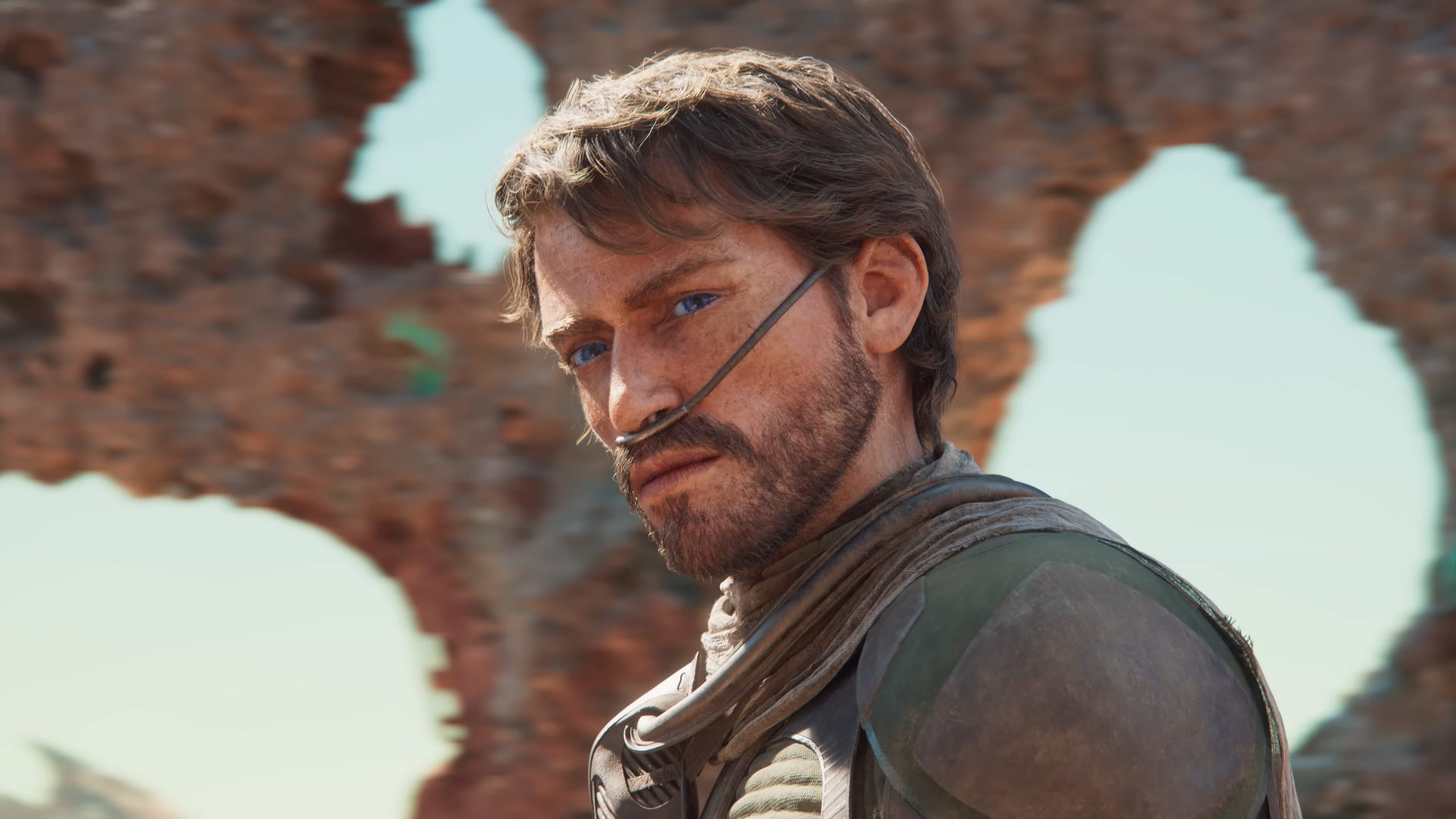 The backbone of this adventure, as teased by Funcom, will be the players’ goal to “plot your rise to power and build your influence within the Landsraad through careful intrigue”.

In service of these aspirations, players will be tasked with building a base, harvesting spice, and gunning down anyone who could stop you in “fast-paced, deadly combat that shifts seamlessly from armored groundcars to ornithopters in the sky.” 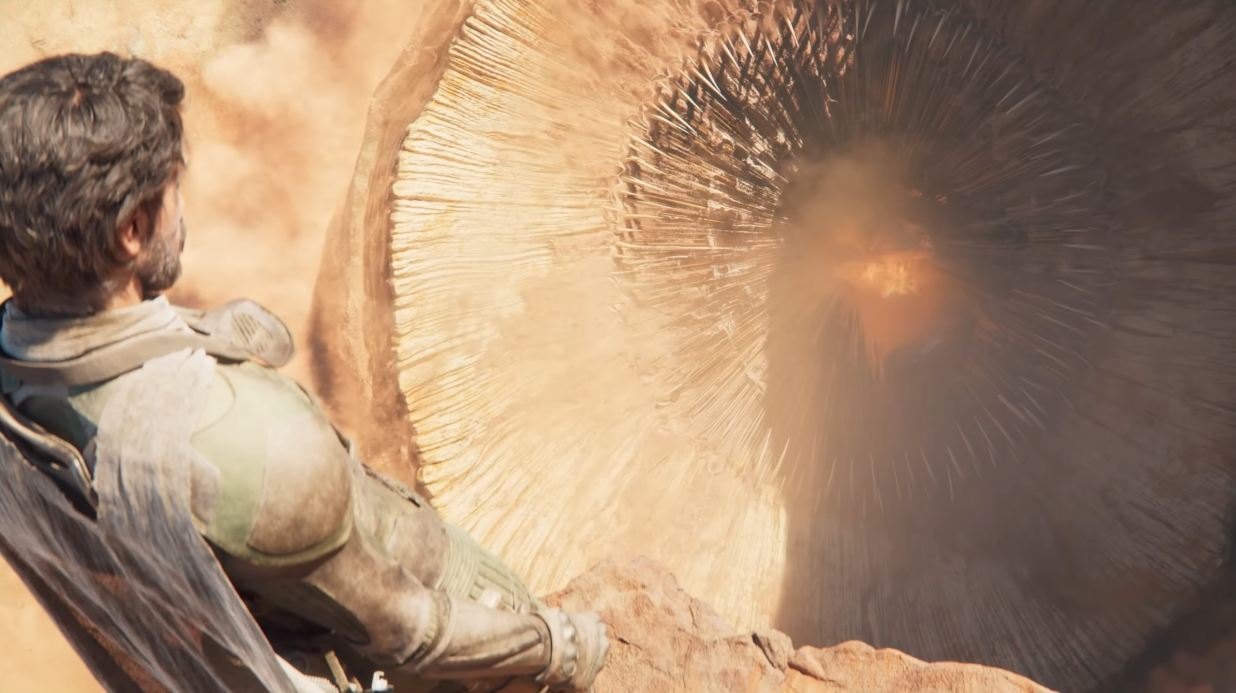 “Funcom has been pushing boundaries in the MMO genre for 20 years,” said CEO Rui Casais in the press release. “It’s where our roots are. We built on that with Conan Exiles, our first big success in the survival space.”

“With Dune: Awakening we’re bridging the survival and MMO genres to create something truly unique and ambitious within a universe we’re all so passionate about,” he asserted. 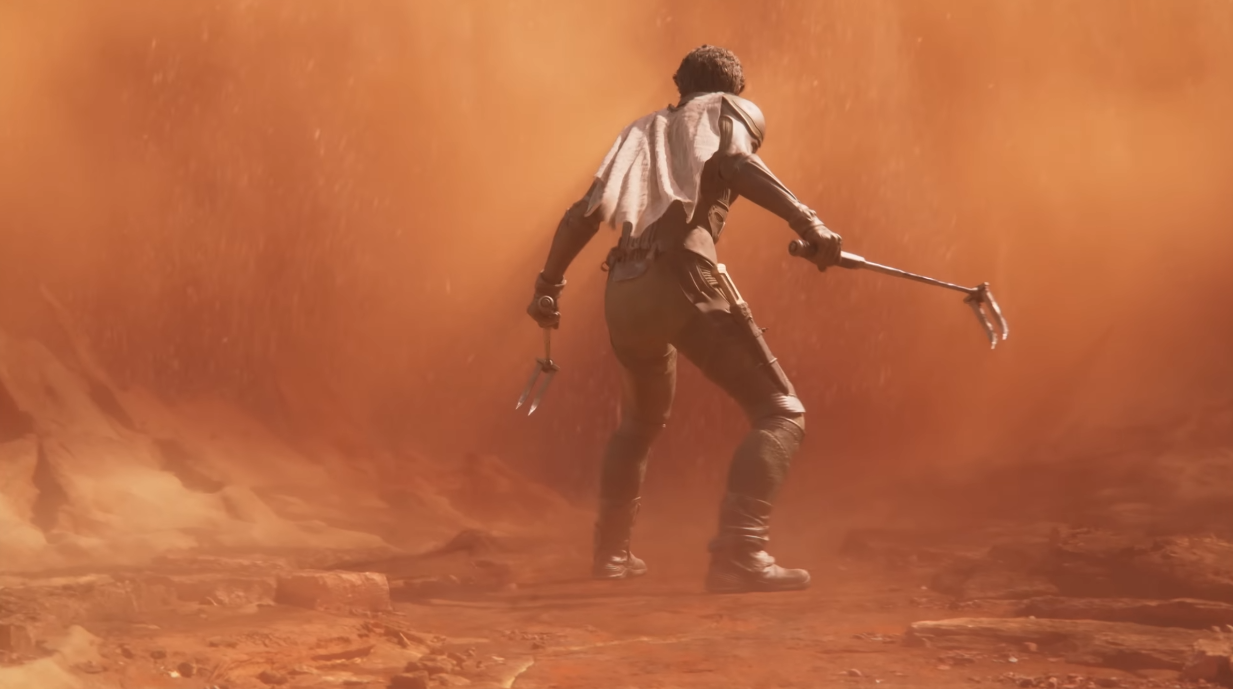 “We are thrilled to be creating this with a partner like Funcom, who is so adept at capturing the rich detail and wonder of cinematic worlds for the gaming audience,” the exec concluded.

Notably, the trailer was warmly received by most – third party plugins reveal that the original YouTube upload of it to Funcom’s official channel, as of writing, has, 6.2 thousand likes to under 500 dislikes – and reactions on social media seemed to skew positive.

However, there were more than a few fans disappointed with the game’s choice of genre, as despite the developer’s history with similar survival MMOs such as Anarchy Online, Age of Conan, and The Secret World, a significant number of fans feared that the game being a survival crafting MMO would detract from the identity of the original IP.

“See but what if in stead of an open world mmo it was a real game, wouldn’t that be good,” pleaded @peethanonline.

“Dang. I was hoping for a single player rpg,” lamented @theactiontom, who drew a response of “Right! I want hardcore story pls,” from fellow user @LuckySomni.

Sharing a meme to emphasize their disgust, @ArcanaLegacy mocked, “Dune Awakening had me in the first half ngl”. 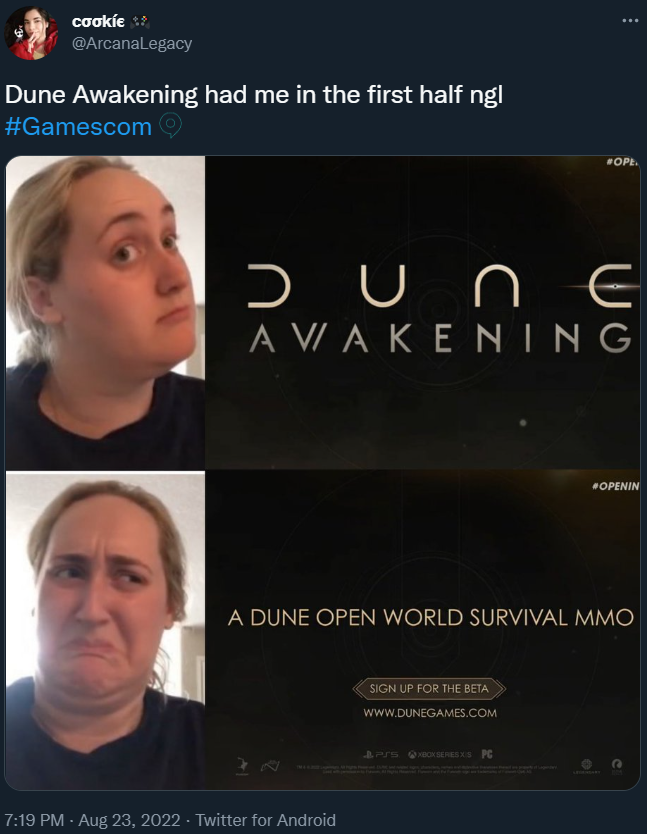 “It annoys me when the term MMO is used to describe a basic multiplayer survival game,” criticized @tap836. “The term MMO has a very specific meaning to people about the kind of game it will be. We think of an MMO being a game like WoW, FFXIV, EQ, Guild Wars, ESO…”

Dune: Awakening is headed to the PC, PlayStation 5, and Xbox Series X|S platforms, though as of writing, it has not received an official release date.

Conversely, eager players who want to set their feet in the sand can sign up to the beta right now via the game’s official website.