While Americans treated Tesla CEO’s Elon Musk’s recent takeover of Twitter as the literal apocalypse and threatened to leave the platform, Japanese users are rejoicing the changes his ownership has already had for their experience on the platform. 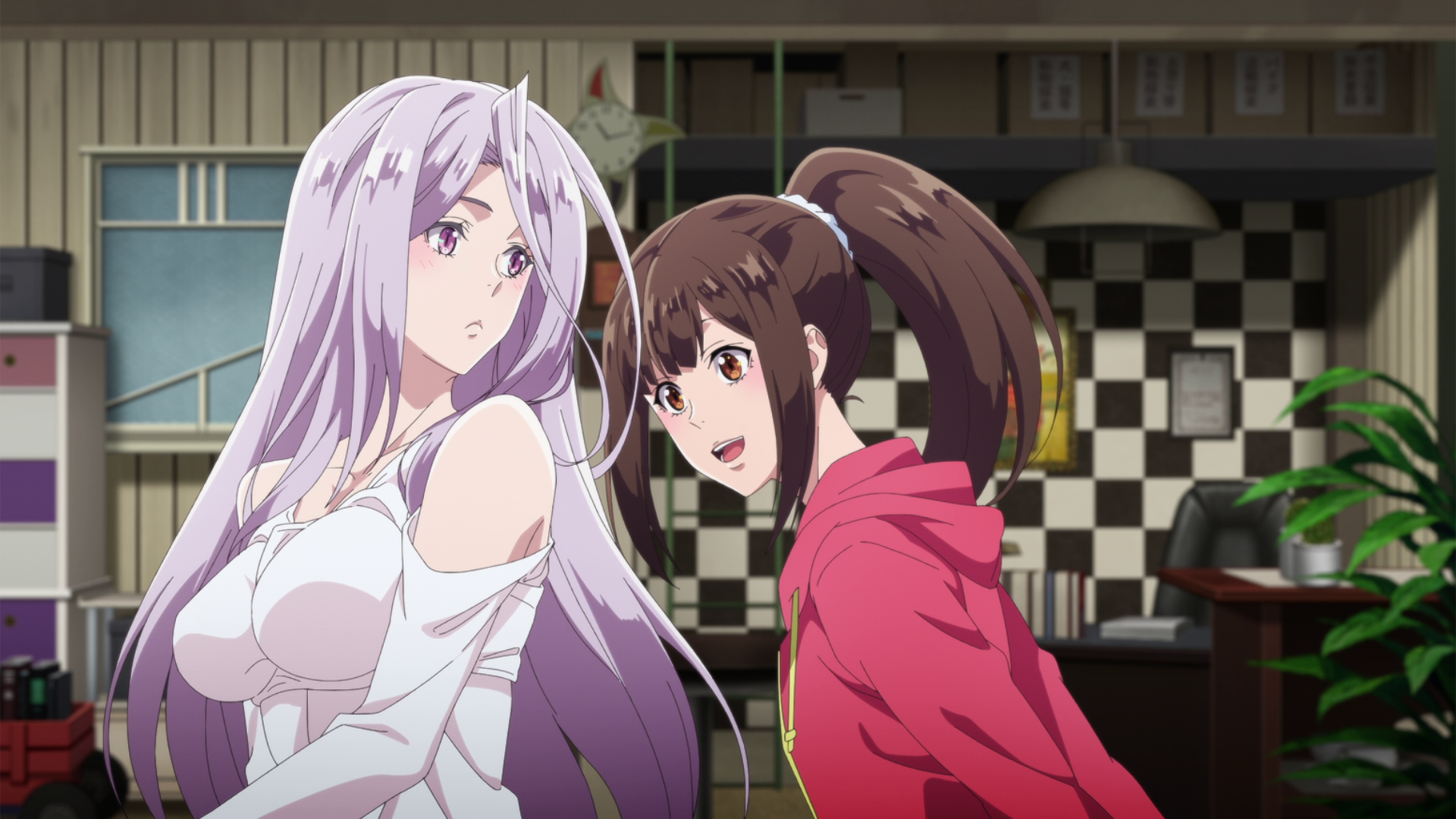 In what some are declaring a ‘Twitter Cultural Revolution’, YahooJP (translated via DeepL) has reported that during Musk’s mass purge of Twitter staff – a purge which included the Twitter Japan (TwitterJP) curation team – “former employees from TwitterJP’s Public Relations Department shutdown Japanese Twitter’s official News Feed and Moments.”

Throughout the shutdown, as users’ trends, news feeds and moments started to be generated organically rather than by the algorithim, they began to notice that they were no longer seeing a disproportionate amount of left-wing media sources – including Asahi Shimbun, TV Asahi, BuzzfeedJP and HuffPostJP – forced into their experience.

As such, Japanese Twitter users began accusing the TwitterJP curation team of not only giving preferential to said media outlets, but also “manually implementing a specification to insert tweets containing these articles, topics, and words in users’ timelines without permission.” 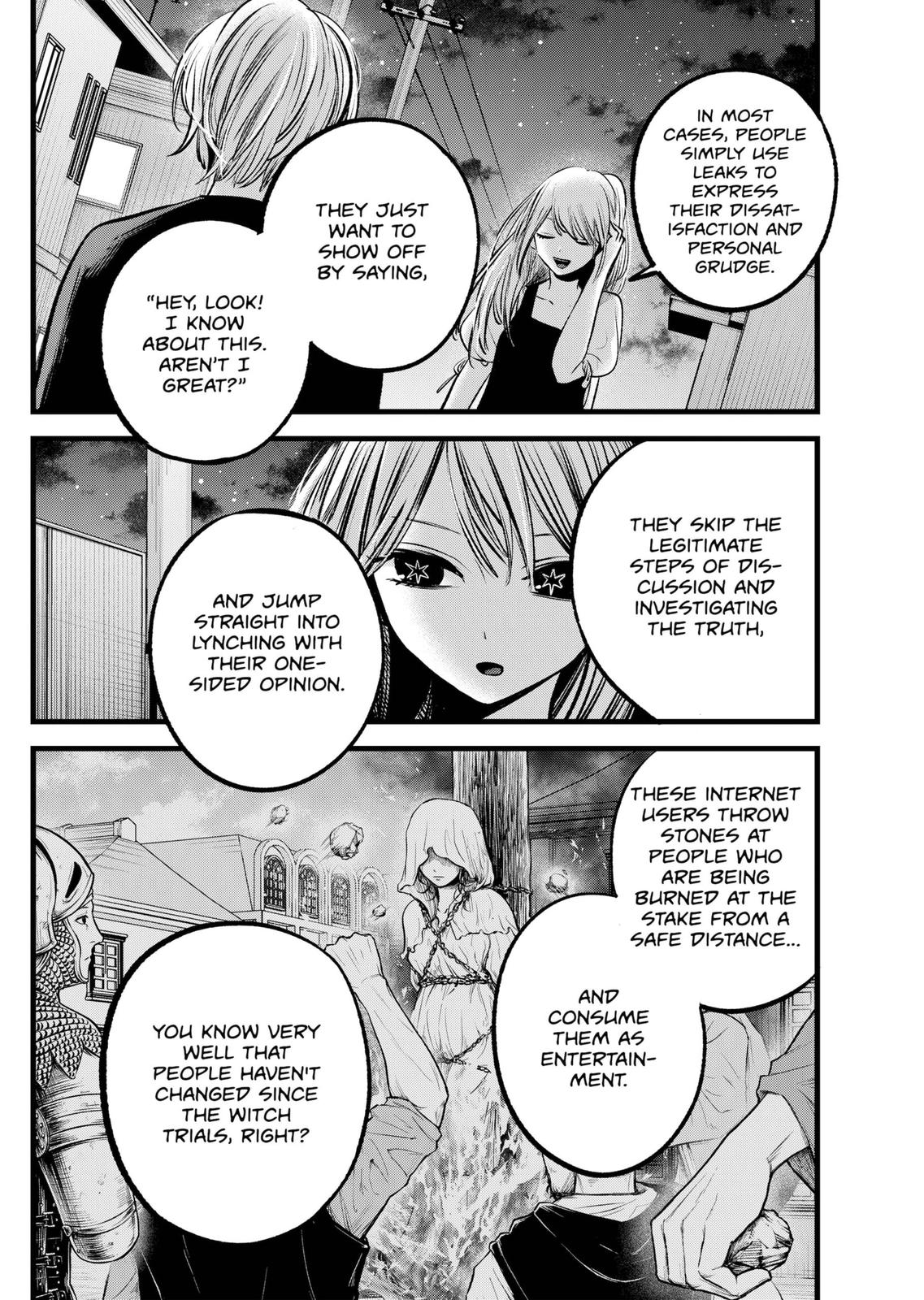 One such accuser, Sakisiru Editor-in-Chief Tetsu Nitta, announced that “Since the dismissal of the people who seemed to be the curation team progressed, the update of the news feed stopped, and as a result, it was distributed mainly by major left-wing media such as Asahi Shimbun, TV Asahi, Buzzfeed, and Huff Post Japanese version.” 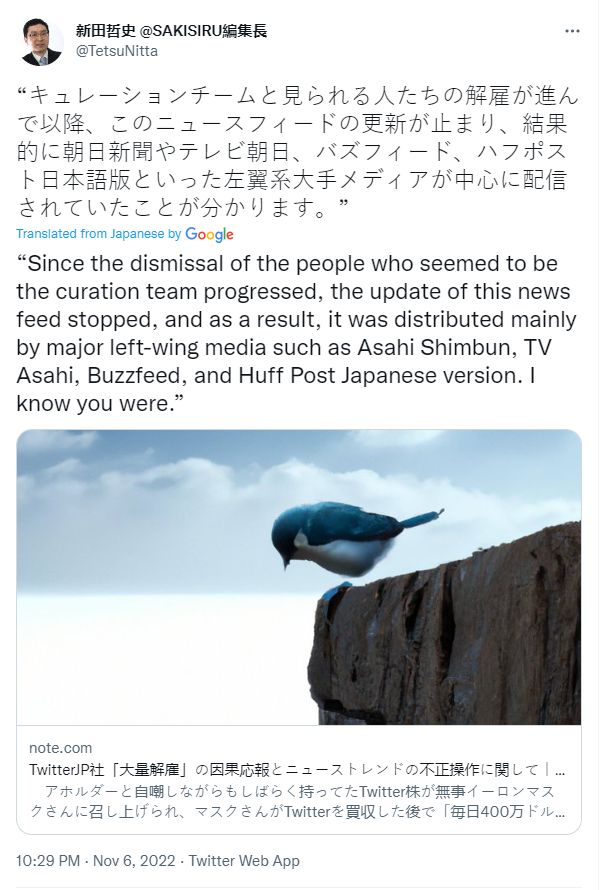 “As a Japanese user, I’m actually feeling this change,” @Romly opined on the noticeable differences since Musk’s purge of TwitterJP. “Still no politics in the Jp trend. I can see some at the ‘Recommendation’ tab which includes ‘curated’ news or intl topics, but even there you can see how ppl talking/loving this change as calling it Easter of the timeline.”

Pokémon and FF7 REMAKE concept artist Yo Shimizu listed the new changes they have seen on Twitter after Elon Musk took the reigns of Twitter. “Political tweets have stopped flowing.  Trends have become convincing (such as anime commentary).  Weird tags have disappeared from trends. People who were invisible even though they were mutual is now visible ← New! There are only good changes so far!” 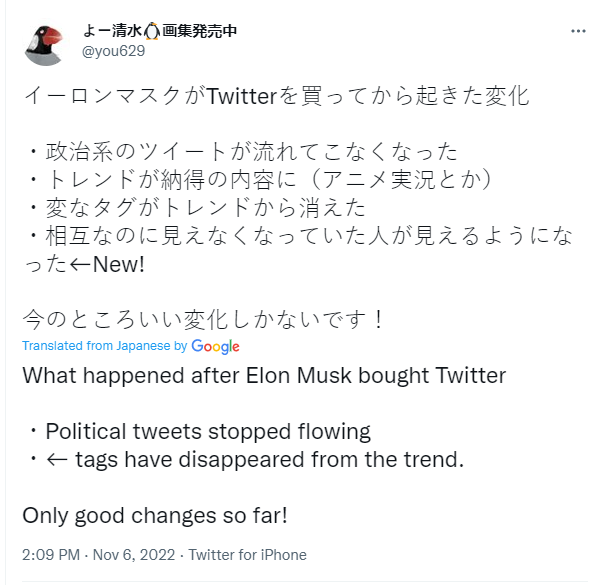 @tk_takamura even speculated that this manipulation “could be the main culprit behind the countless moe-e and otaku content flare-ups that have occurred since 2013, including the 2019 Uzaki-chan blood drive scandal and the rise of the radical Twitter feminist Keiko Ota.” 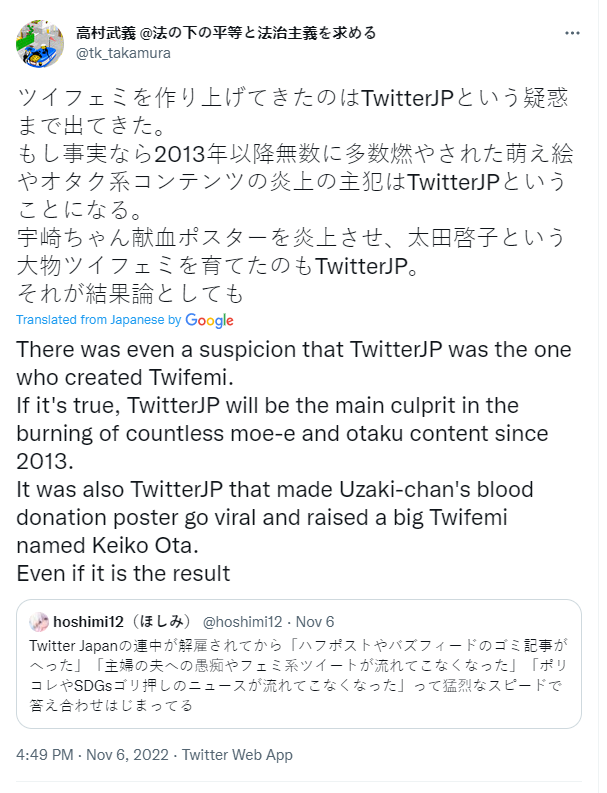 One of the most notable allegations levelled against TwitterJP’s curation team was that they had been enforcing strict “skin color regulations” on artists, choosing to promote artwork of darker-skinned characters over those of lighter-skinned ones. 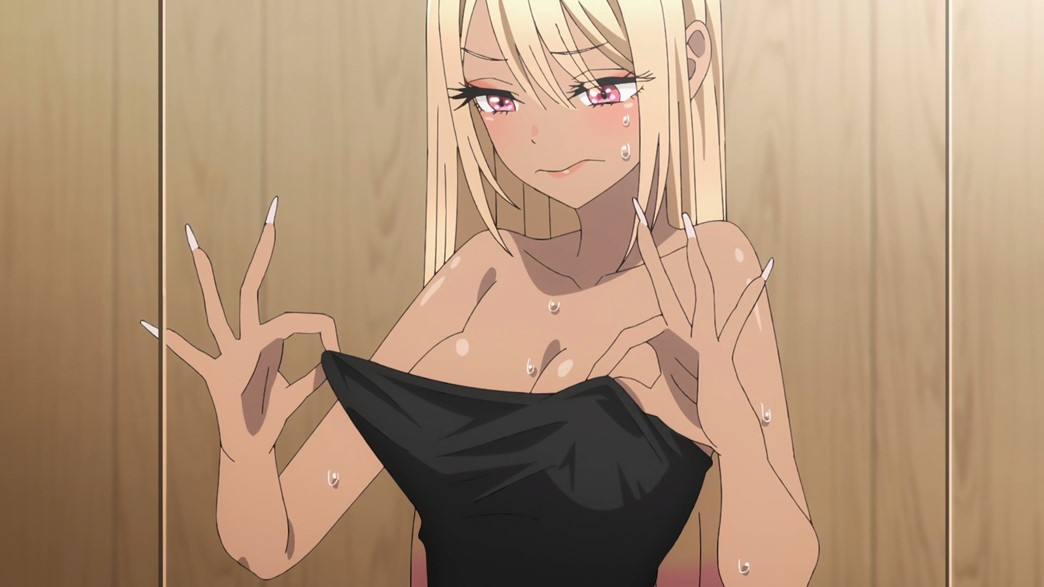 “It seems that the illustrator’s shadow ban has been lifted one after another, and I’ve been seeing quite a few in the search results,” noted @hoshimi12. “Skin color regulations were unusually strict only in the Japan region, and TwitterJP people really controlled the media as they liked.” 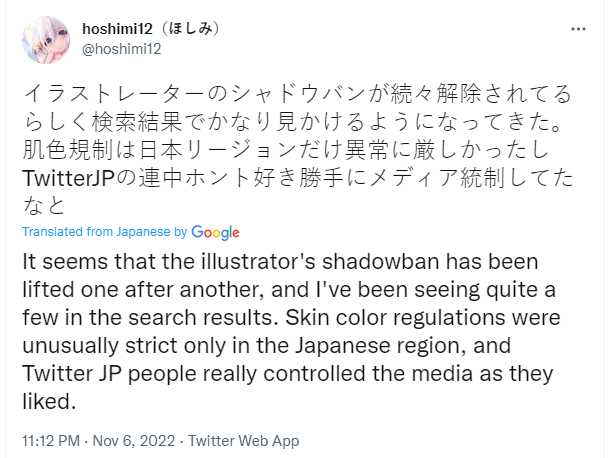 Additionally, artists have been celebrating their liberation from their shadow bans under the hashtag #TwitterEasterTL. Using this hashtag, artists are utilizing the social networking tool by tweeting out their art to reconnect with or gain new fans.

Amongst the sea of artists ecstatic to hear the news were the creators of the Pretty Cure manga series the Kamikita twins, who tweeted “…so I’m going to test. Are you seeing this on your TLs? #HUGpuri”: 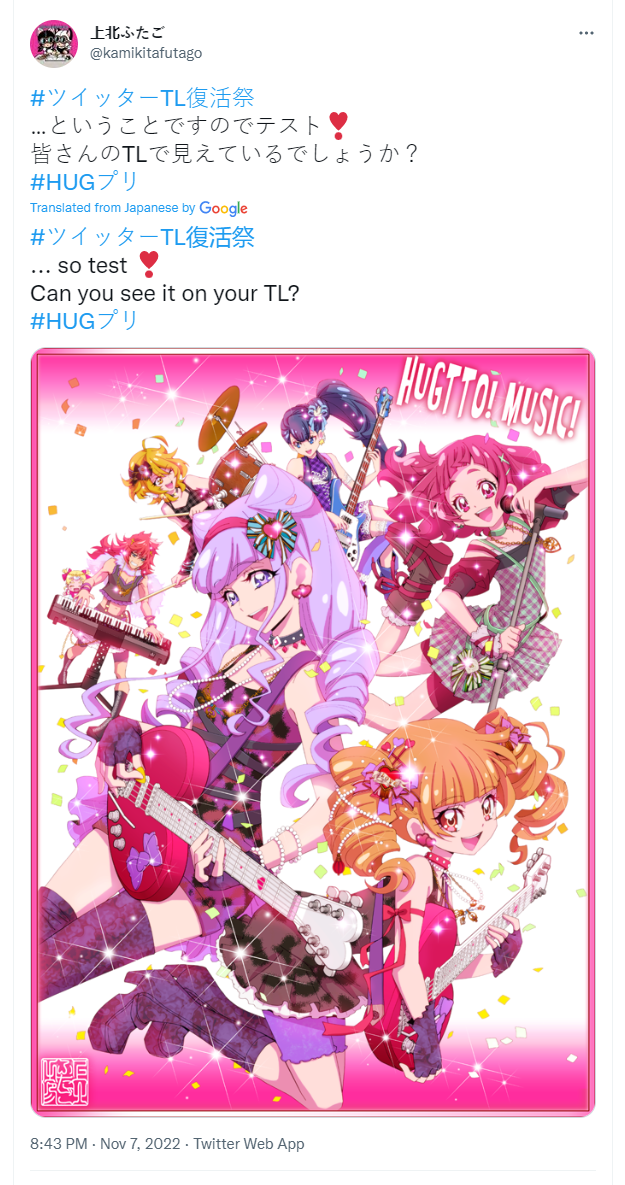 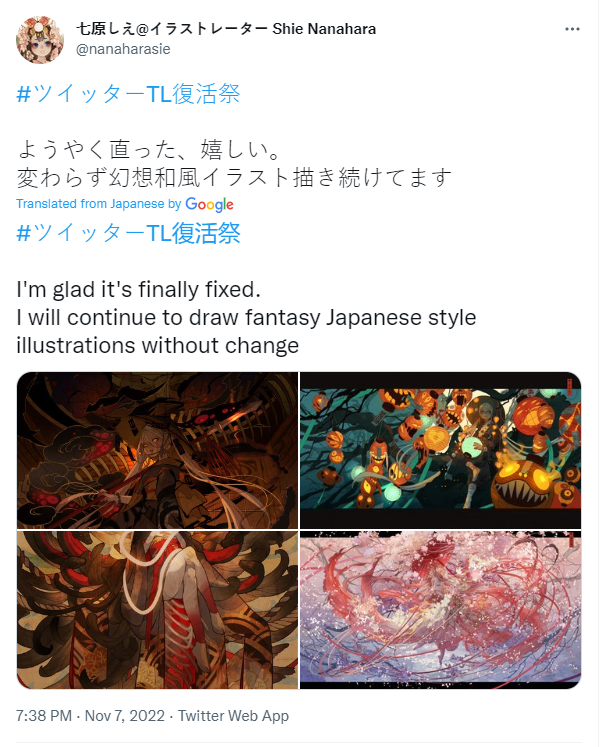 As well as Kengan Ashura and Kengan Omega artist Daromeon, who celebrated his freedom from TwitterJP’s shadow banning with a risqué drawing of the aformentioned series’ A-list purgatory gladiator, Liu Dongcheng. 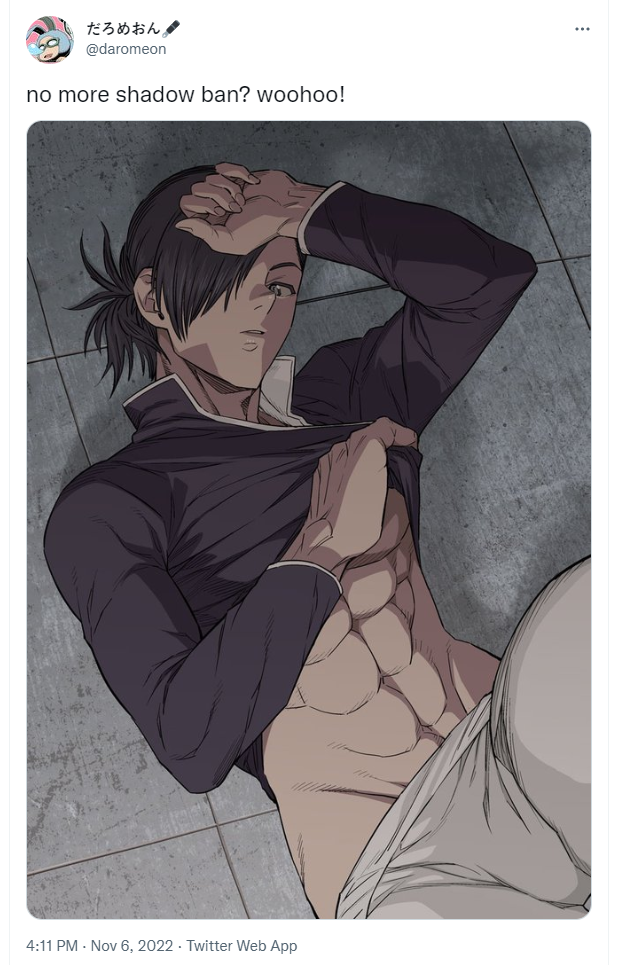 “The curation team were working towards the goal of how to give readers fair facts,” claimed Nagayama. “The people who were trying to create a healthy and safe platform were also the ones who were roundly targeted for the curation this time around.” 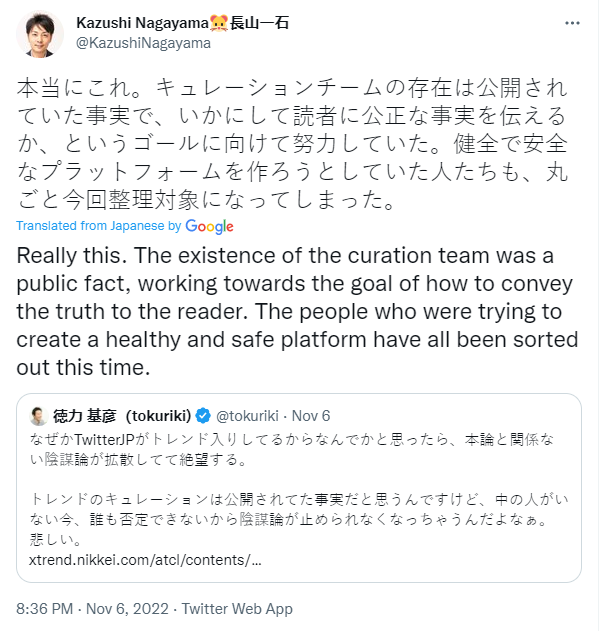 Business Insider Japan reporter Ikeko Takeshita claims that in order for their articles to be featured, the TwitterJP curation team allegedly required members of the media to follow a specific procedure.

“The process of creating a moment for their own articles which consisted of contacting the Twitter curation team and then waiting for the curation team to review it.” Takeshita said.  “If approved, the curation team will feature these Moments alongside Twitter Trends covering the latest news and current events.” 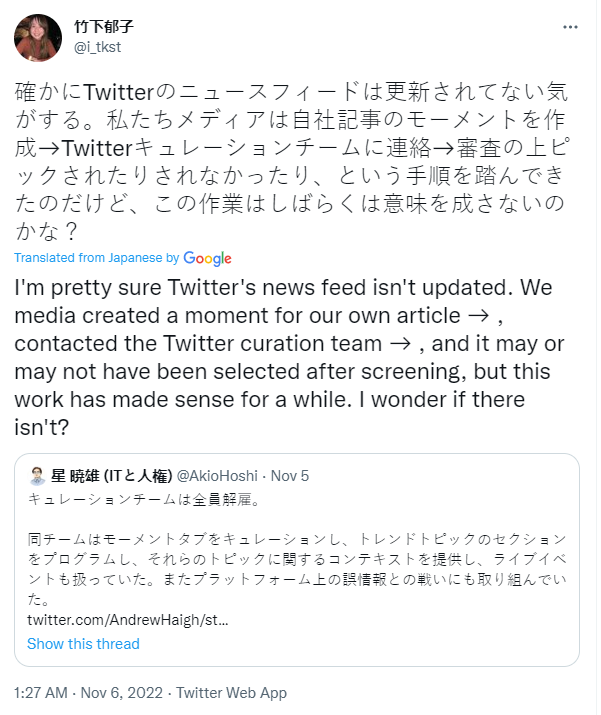