As anime and manga are beginning to receive more and more live-action adaptations, Japanese actor Yuki Matsuzaki believes it should be a requirement that every such production update their source materials in order to appeal to “modern values”. 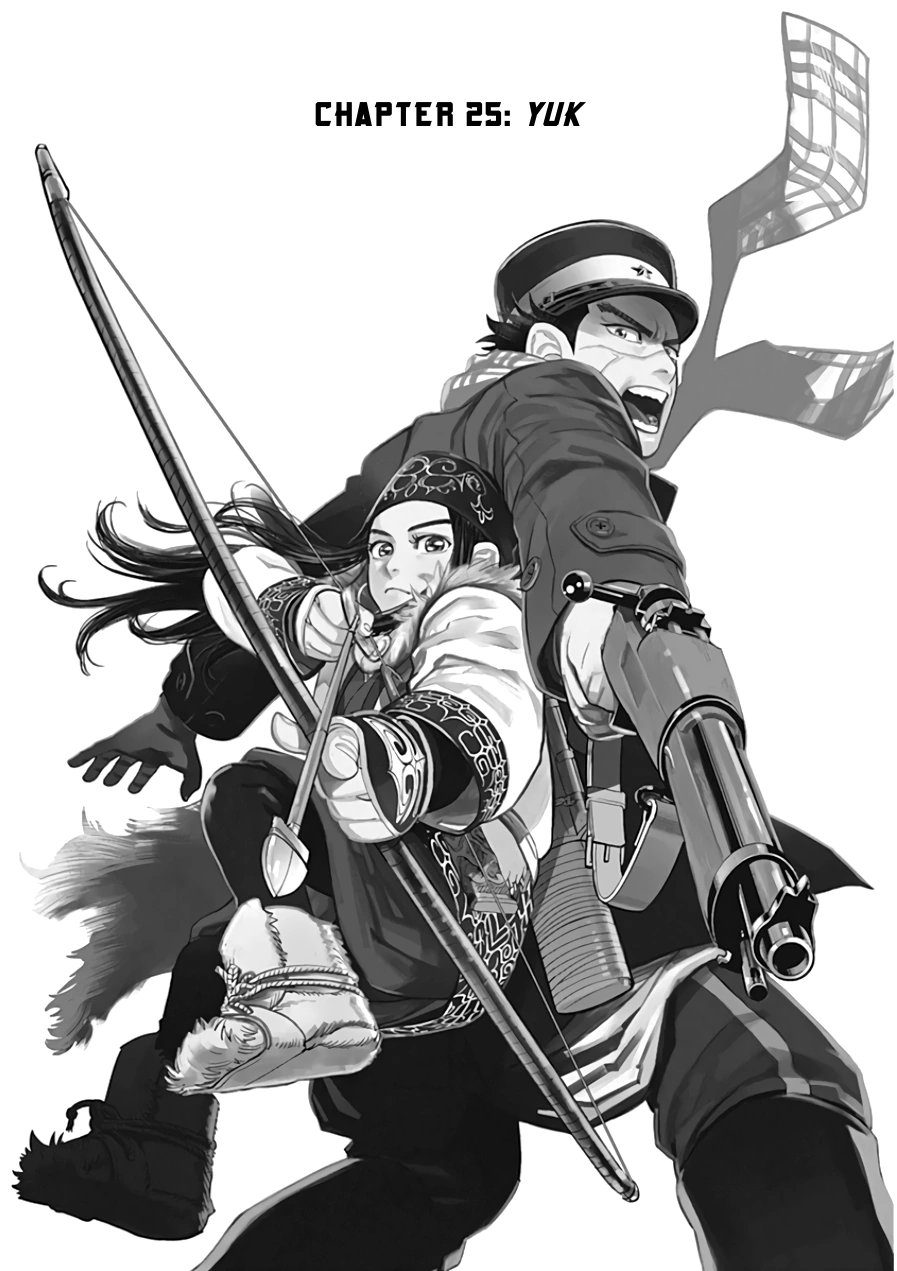 On October 21st, the actor – whose Western filmography includes roles as Garheng in Pirates of the Caribbean: On Stranger Tides, Nozaki in Letters to Iwo Jima, and Miyamoto Usagi in Teenage Mutant Ninja Turtles (2012), blew up Japanese Twitter with a discussion of the upcoming live-action adaptation of Satoru Noda’s best selling manga, Golden Kamuy.

Retweeting a previous thread of his from April 2018 wherein he urged the film’s producers to cast a race-accurate Ainu actor in the role of Asirpa, Matsuzaki added to his initial thoughts (via DeepL) “Not only [this casting issue], but the homophobia/transphobia in this work is also quite bad.” 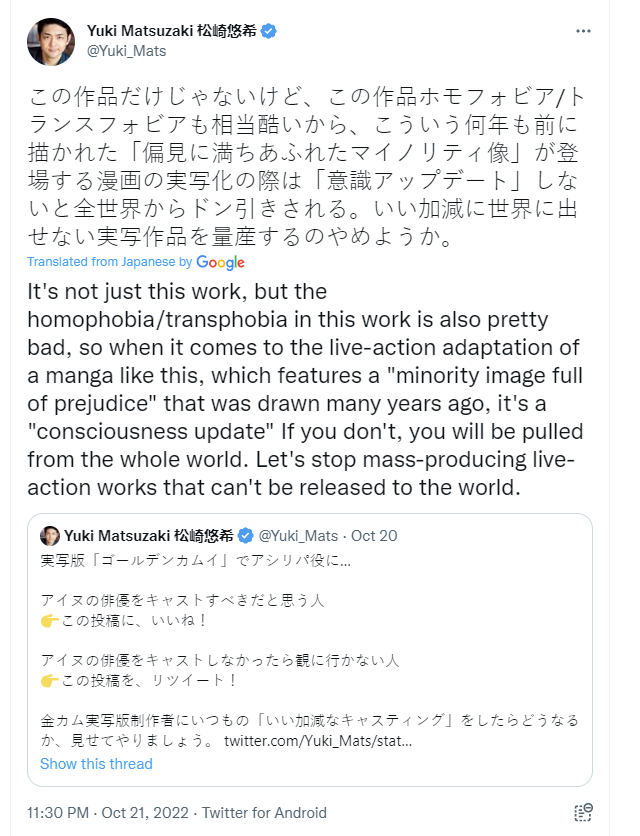 “The whole world will be turned off if we don’t ‘update our awareness’ when making a live-action manga with such a ‘prejudiced minority image’ drawn many years ago,” he then declared.”Let’s stop mass-producing live-action works that can’t be shown to the world for good.” 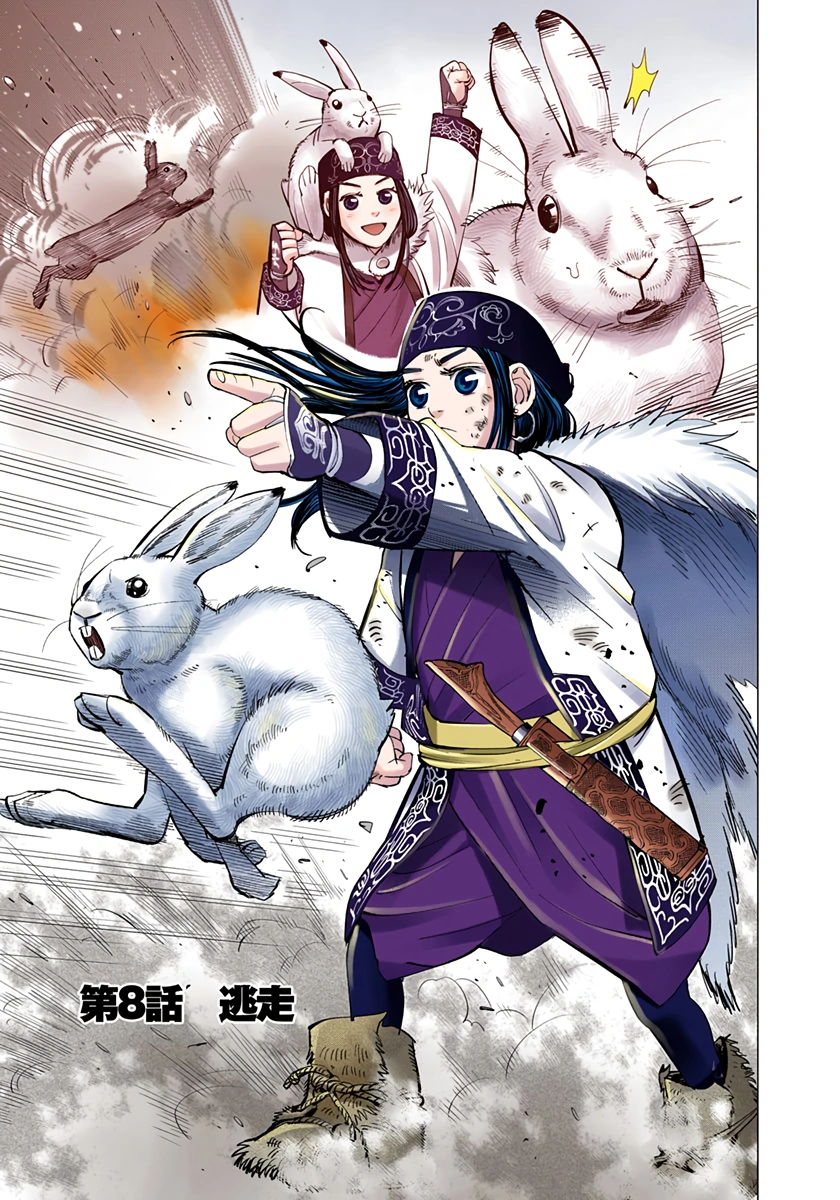 As an example of Golden Kamuy’s “prejudiced minority depictions”, Matsuzaki pointed to the relationship between Yakuza members Kiichirou Wakayama and Tatsuya Nakazawa and described their portrayal as “being the stereotypical gay couple who is treated as a ‘joke’ just for ‘being gay’.”

“And every time they show affection for each other, the ‘main character who looks at them coldly’ is inserted to emphasize the impression that they are ‘strange people’ to the readers,” he further argued. 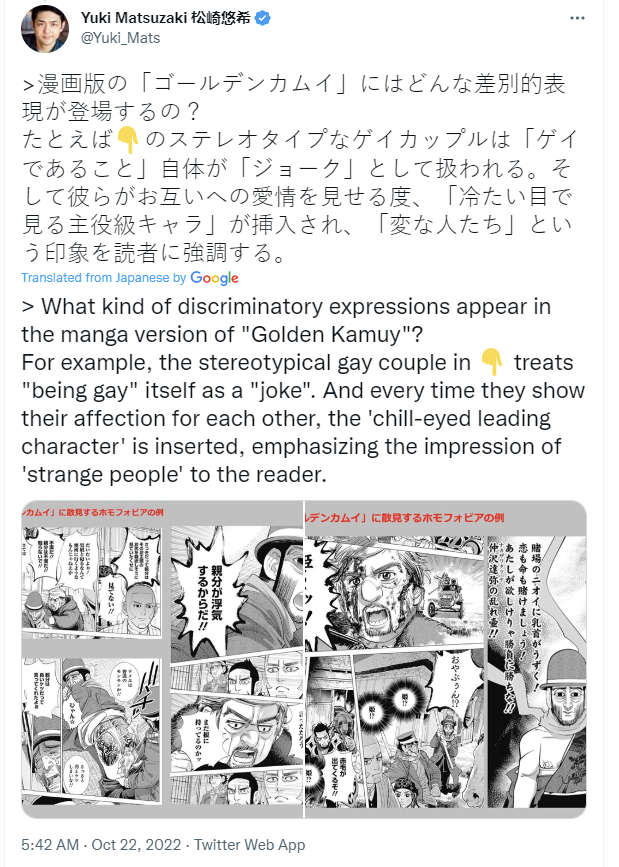 Presenting another set of panels, the actor continued, “The ‘clownish treatment’ of this gay couple is so thorough that a ‘fake emotional panel’ appears in a spread in the scene where they fall together in an attempt to save their lover.” 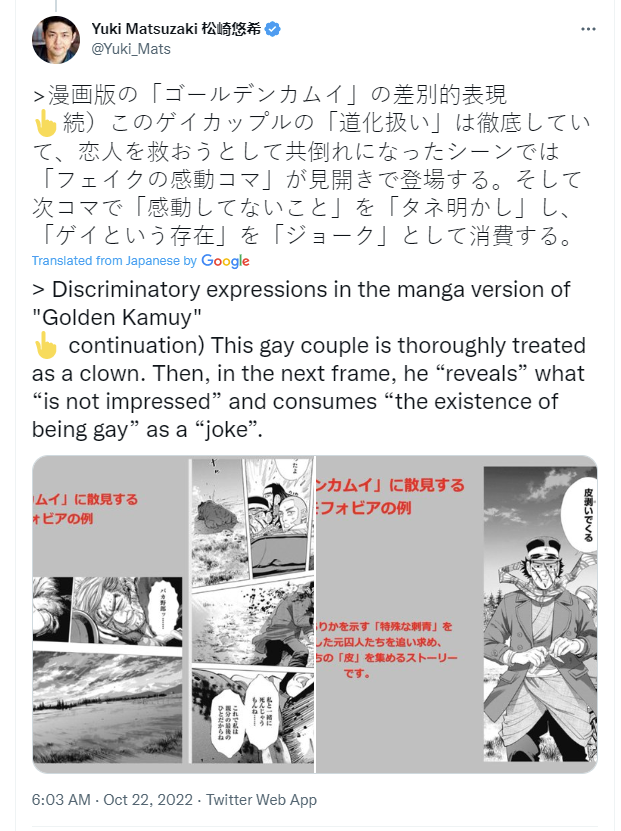 “Then, in the next panel, he ‘reveals’ that he is ‘not moved’ and consumes ‘the existence of gay people’ as a ‘joke’,” he said. “If such “discriminatory depictions of minorities” are reproduced as ‘jokes’ in live-action films … and if the audience laughs at the ‘jokes’ … everyone in that theater gets the message that being a minority is a joke and that it is okay to laugh.”

“In other words,” he explained, “it encourages discrimination.” 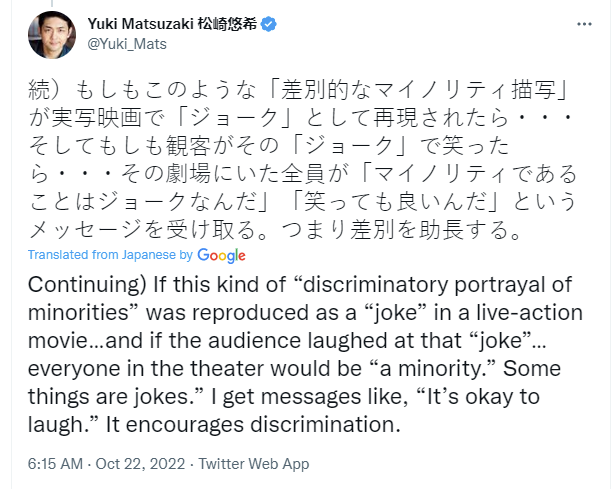 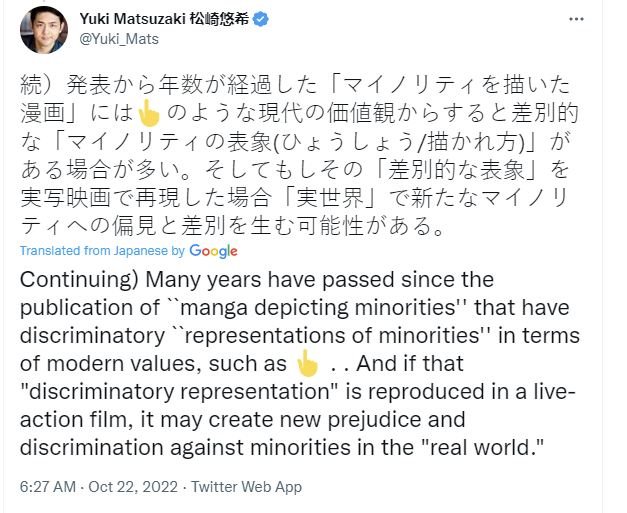 Unfortunately for Matsuzaki, Japanese manga fans – particularly those of Golden Kamuy – did not share his sentiment. As such, they soon responded to the actor with criticism of their own.

The actor was not pleased with this, as on October 25th, he returned to Twitter to express disbelief that said fans did not take kindly to his disparaging virtue signaling. 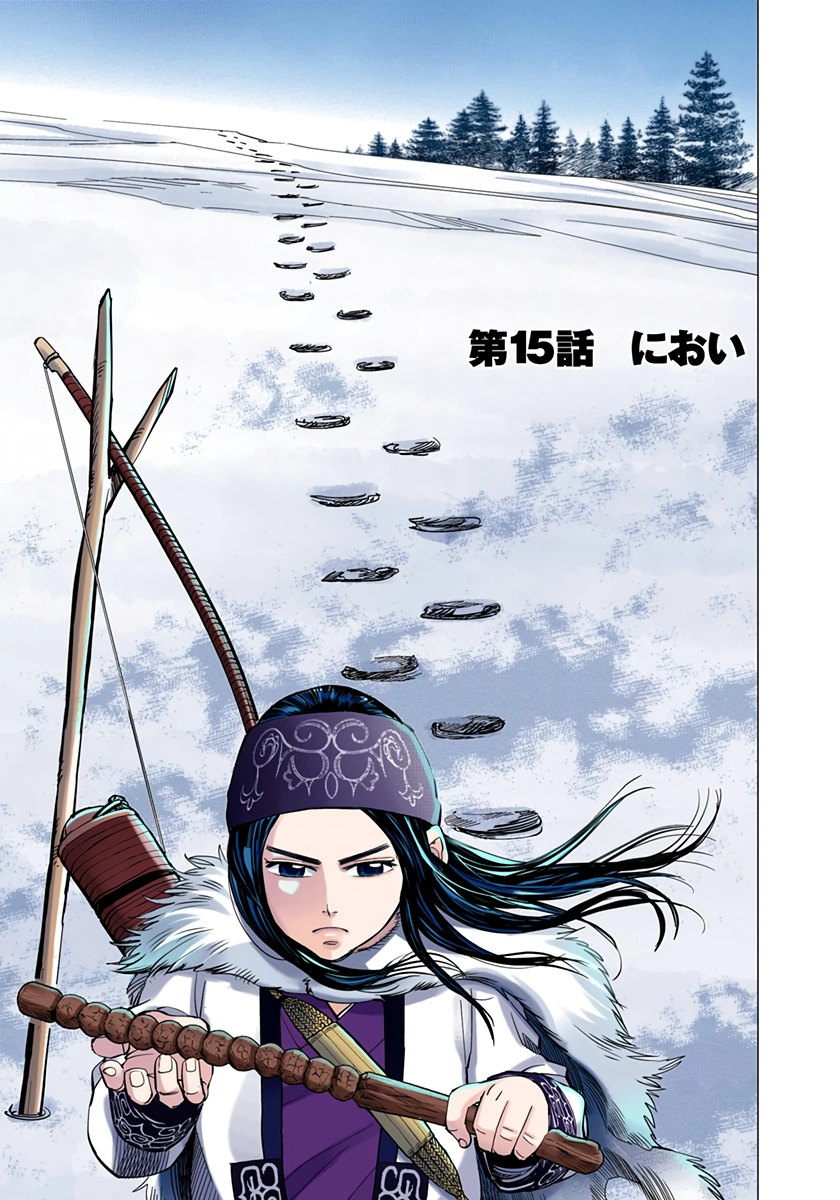 “I asked Japanese Golden Kamuy manga/anime fans to publicly call for Ainu representation in the live-action film currently being made,” exclaimed Matsuzaki. “And guess what happened? THEY HATED THE IDEA.”

“They say it doesn’t matter as long as the Ainu girl (Asirpa) is portrayed funny,” he lamented. “*sigh*”. 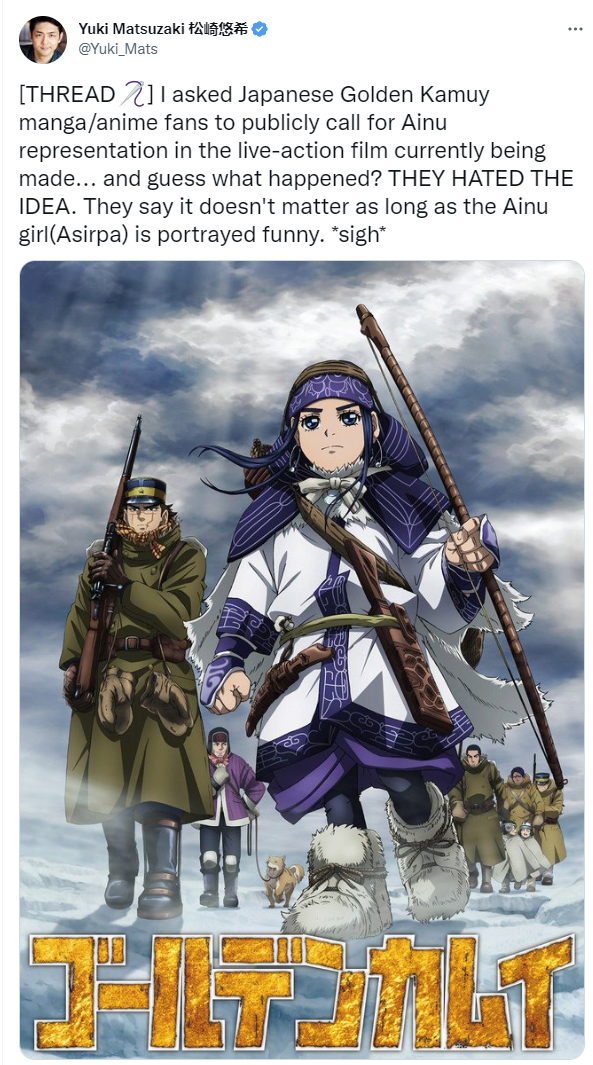 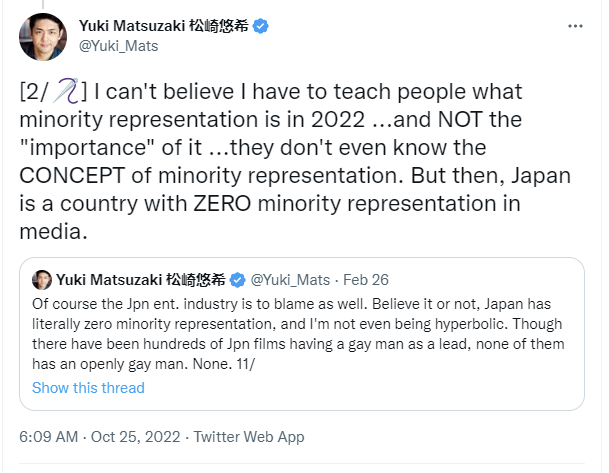 “And because there’s no minority representation in Japanese movies/TV series, Japanese people are misled to believe that Japan is ‘a homogenous country,'” the actor further decried. “IT IS NOT. Japan is… and HAS BEEN… a DIVERSE country. It’s just its true diversity hasn’t been represented in media.”

“Japanese people are SO FAR BEHIND when it comes to the concept of minority representation in media,” Matsuzaki argued. “Even after I pointed out these scenes👇 in Gold Kamuy are homophobic, they still couldn’t get what’s so homophobic about. ARE YOU KIDDING ME?! What’s NOT homophobic?!?!” 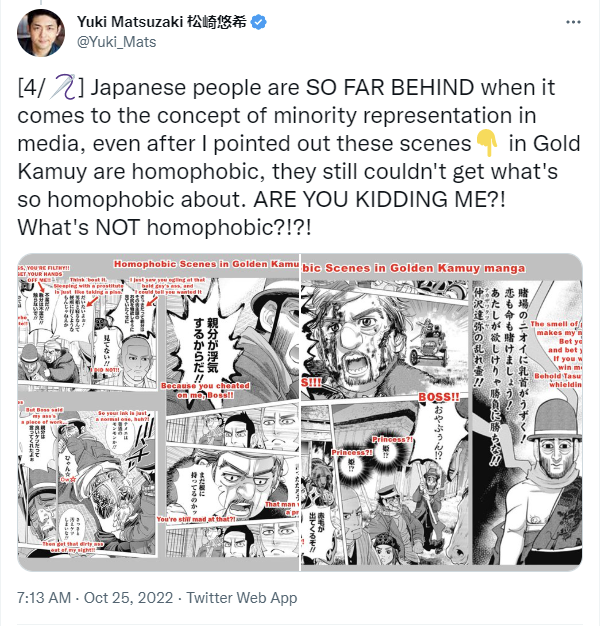 “These toxic, and the lack of minority representations in media have real-life consequences,” he claimed. “For example, many mixed-race Japanese are treated as “foreigners” because they’re portrayed as ‘not Japanese’ on media all the time. REPRESENTATION MATTERS.” 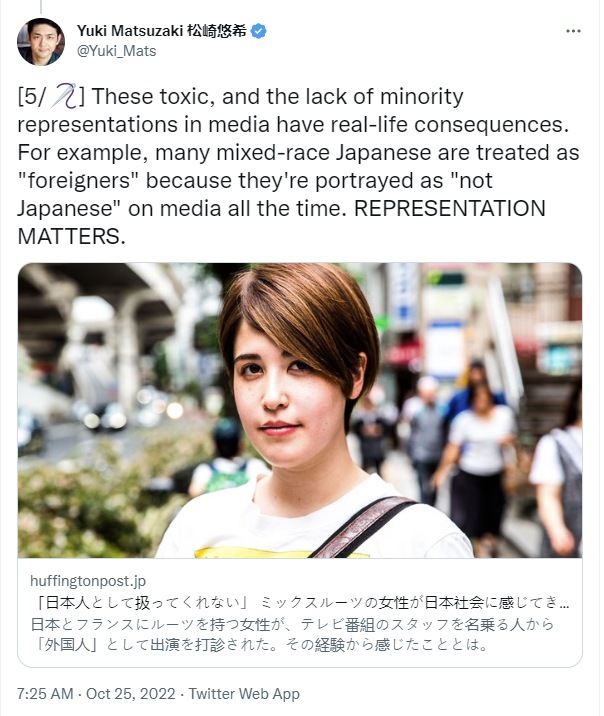 Attempting to rally his followers to his cause, Matsuzaki then declared, “I know Japanese entertainment industry responds only when there’s enough public pressure to do the right thing. So what do you say? Tell @SHUEISHA_PR what YOU want to see in Golden Kamuy film.”

“Do you want to see Ainu representation?” he asked, “Or you just want silly faces?” 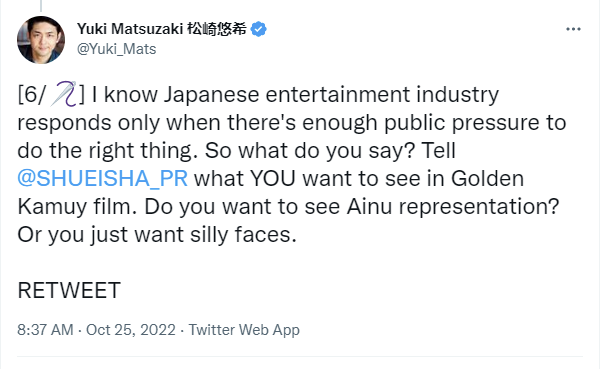 Eventually, the actor expressed disgust at the “current state of the Japanese Golden Kamuy fandom” based solely on the fact that they disagreed with his fixation on Asirpa’s potential Ainu casting. 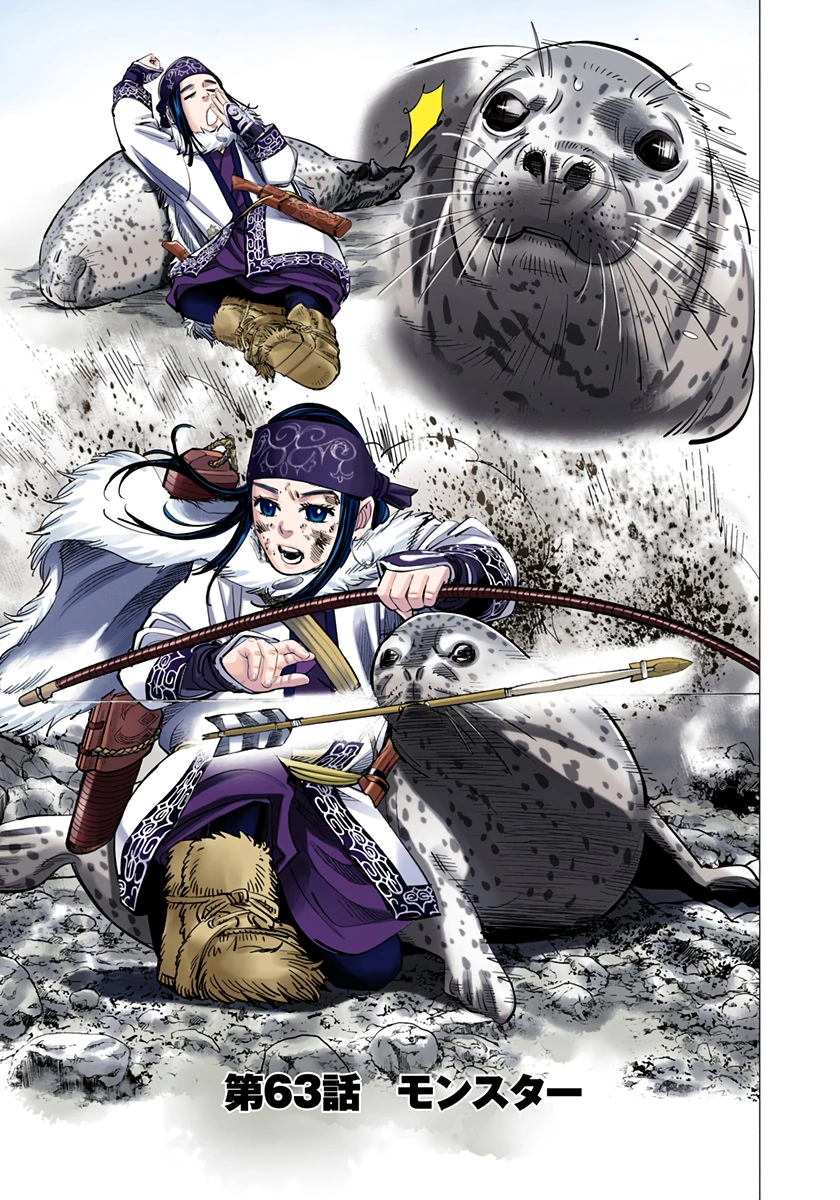 Conversely, 97.3% believed that the film’s producers should cast whomever they want in the role, no matter their heritage. 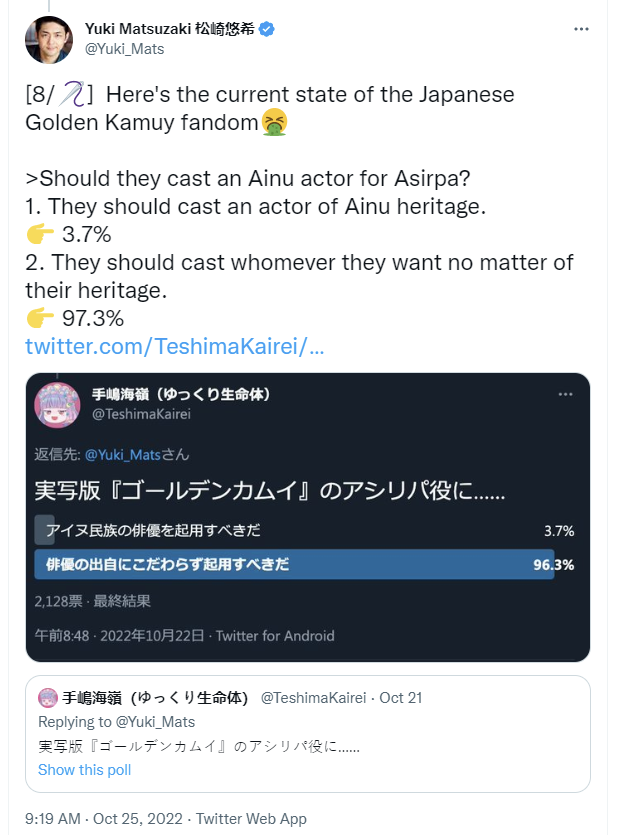 As of writing, the live-action Golden Kamuy film has yet to receive an official release date. 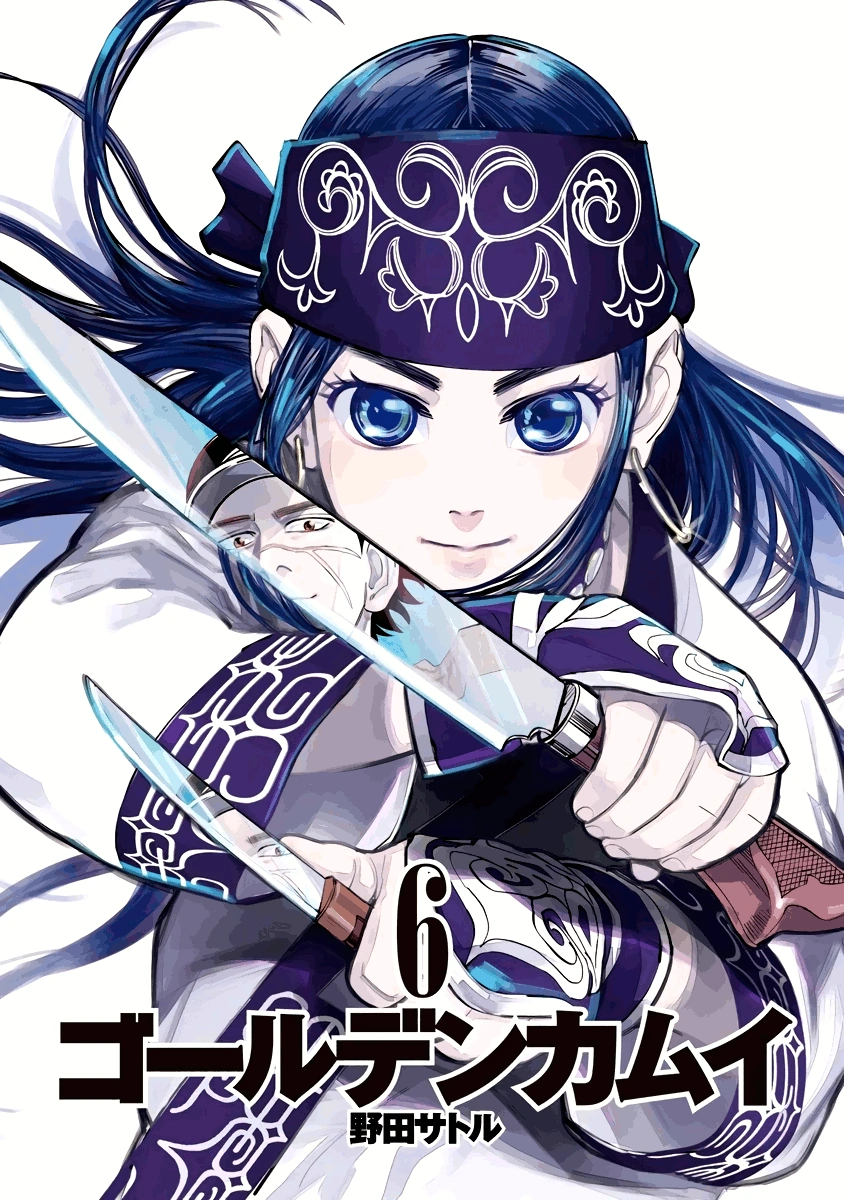