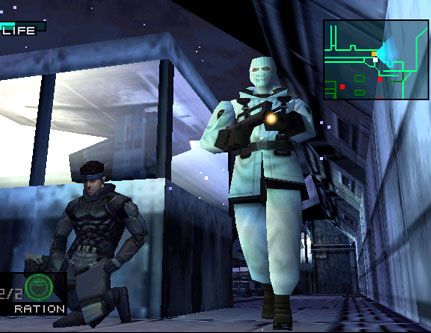 An image evoking the ’90s had been shared across social media over the last few months, wherein two children can be seen playing Metal Gear: Solid in a room filled with toys, games, and film memorabilia from the era. It usually sparked discussion centered around nostalgia, the values of the time, consumerism and capitalism, and whether certain items were anachronistic.

One such Twitter user was @Wokal_distance, tweeting “This is a world worth fighting for, and the ache of the nostalgia we feel for this time is the call home.” 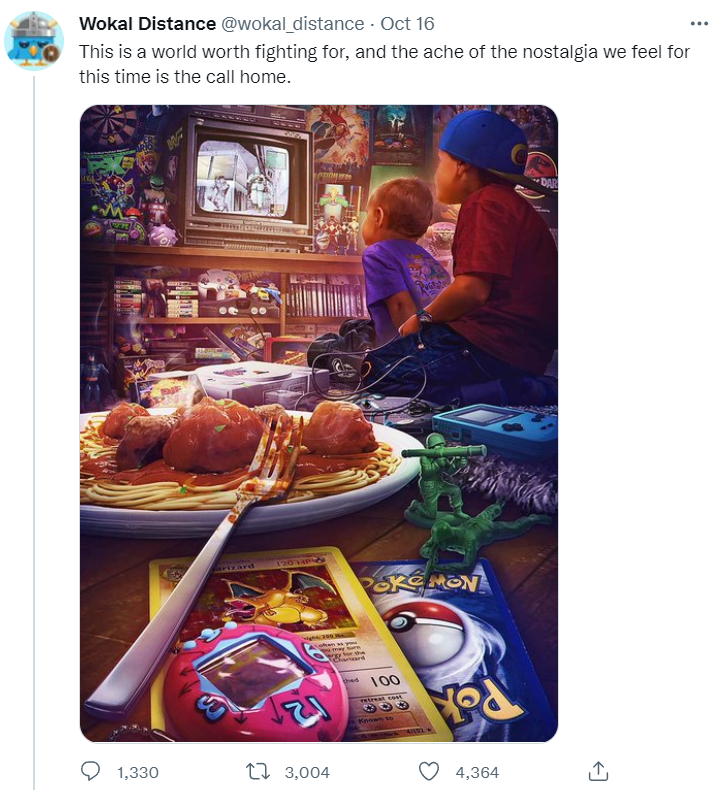 Much like a spy, one particular reply snuck in and took everyone by surprise. David Hayter, perhaps best known as the original voice of Solid Snake in the Metal Gear series, harshly rebuffed the tweet shared by @Wokal_distance, claiming, “Metal Gear is thematically against everything you believe in.”

This further added fuel to the already heated discussion, thanks to the vagueness of both wokal_distance, and Hayter’s tweets, with both conflating what the other meant. For example, thanks to the Metal Gear series being brought up when someone denies video games “being political” (in actuality, to proselytize a belief), some took this as Hayter denying that.

“People who say MGS isn’t political have never played the games lmao,” mocked @B0AH1907. “Or even skipped past the cutscenes because they short attention spans,” echoed @NightFright93. 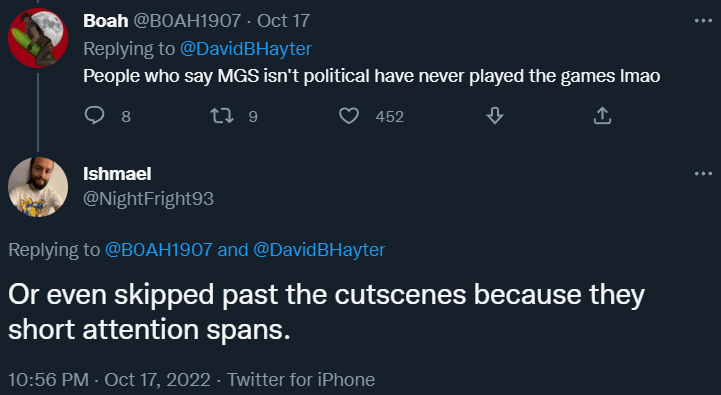 Others agreed with Hayter, at least, with possible themes within the Metal Gear series. “Metal Gear is a story of shedding the past and moving on,” @ArtN_Film_Sam proposed. “Solid Snake himself rips off the nostalgic shackles of heroes in war and action heroes to strive for something human and not mired in nostalgia, masculinity, or an ‘America Gone By’ in a sort of Outer Heaven like Big Boss.” 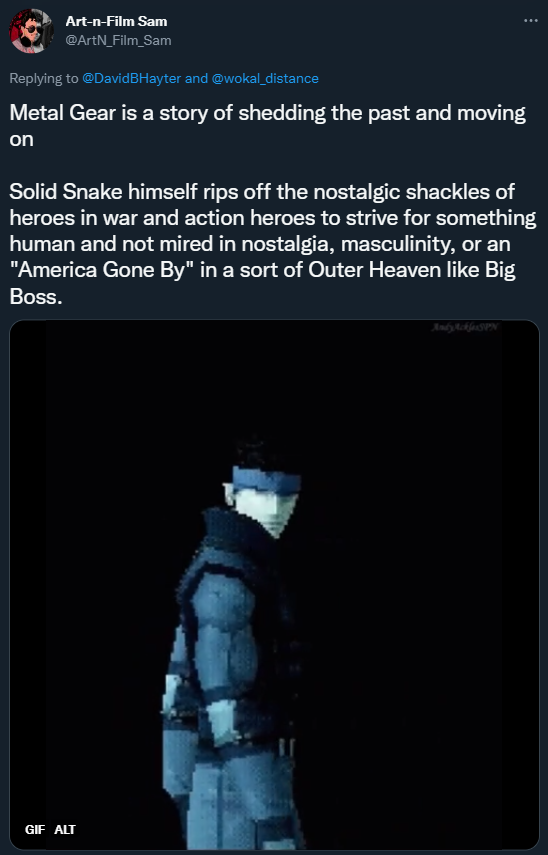 Others refuted Hayter’s claim, insisting Konami’s tactical espionage series be merely treated as entertainment. “You are an awesome actor David & that’s it, your opinions are your own,” @SnakeSears prefaced, “Metal Gear shouldn’t have anything to do with that, other than pure entertainment, if you want to attack someone for having a different point of view go ahead but know you are exposing yourself in the process.” 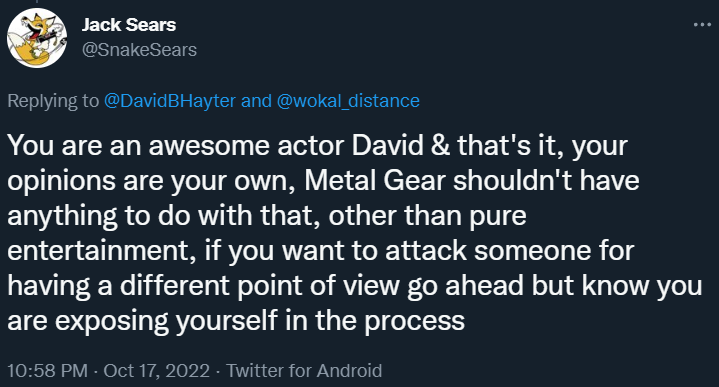 SnakeSears calls out David Hayter on his Twitter page

“These people take solace in remembering the simpler times of their lives,” @AJD_OFFICIAL defended. “Before the controlled demolition of society, finance, morality. Times when they felt safe and comfortable that their present was enjoyable and their futures were bright. Where is that for children now?” 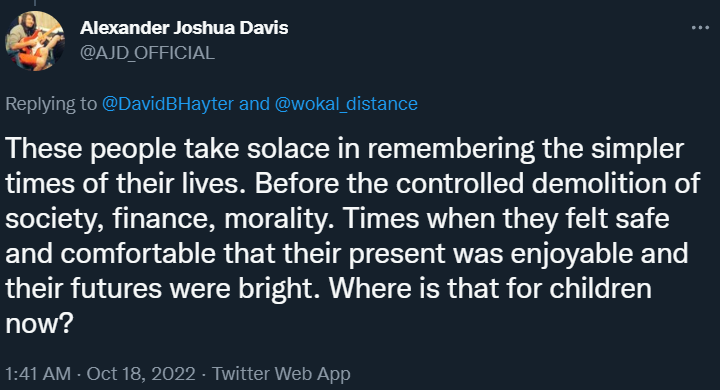 “No wonder Kojima replaced you. The technocratic shadow cabal controlling the world through the manipulation of information and social engineering to create a 1 world government that destroys all individuality and cultural identity were the VILLAINS,” read @IrithyIIian’s comment; arguably one of the harshest critiques.

@IrithyIIian then compared series antagonist Zero with World Economic Forum founder Klaus Schwab. The group has been accused of orchestrating a global communist take over, thanks to the group’s own “Great Reset” proposal (economic and environmental stability through measures such as eliminating private ownership) and Schwab’s boasting of world leaders being part of their “young global leaders” program. 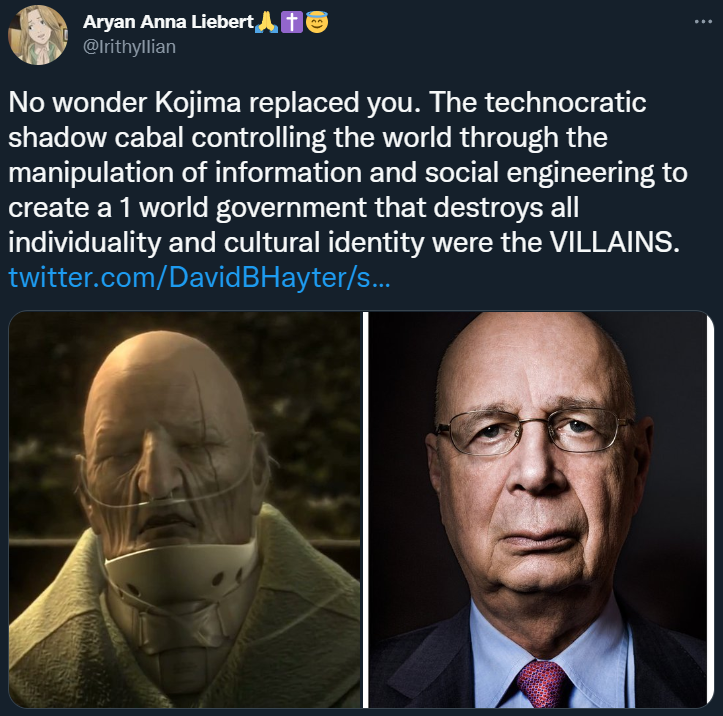 Hayter would eventually delete his tweet, presumably not wanting to cause any more of a fuss. Users were arguing over multiple points, while others mocked @wokal_distance for being effectively backhanded by a figure that was part of that ’90s era for some.

What do you think? Does the Metal Gear series claim some older values are better? Is it a critique of American politics of the past and – what was then – its future? Were the 90s really that good? 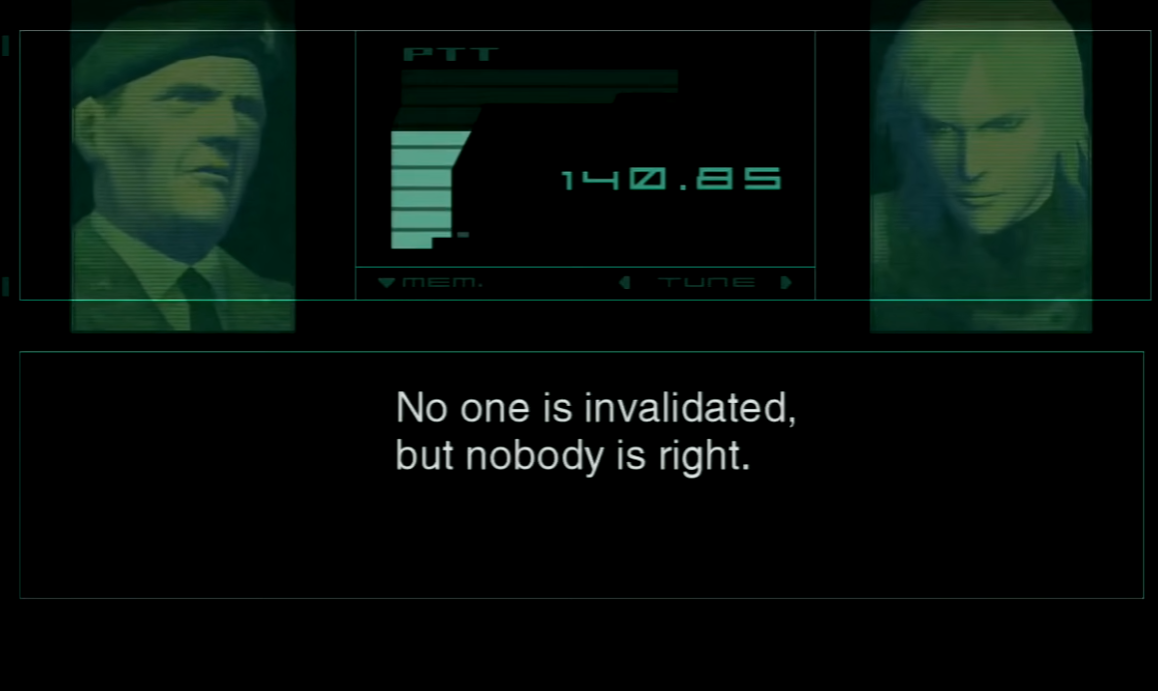 An AI philosophizes with Raiden in ‘Metal Gear Solid 2: Sons of Liberty’ (2001), Konami