There is probably no character more apropos of weirdness than The Joker but, as it pertains to DC as a whole, just when you think you’ve seen everything, something even weirder happens. In a backup story in the new issue of Joker: The Man Who Stopped Laughing, the Jester of Genocide became a dad although not by means of typical biology. 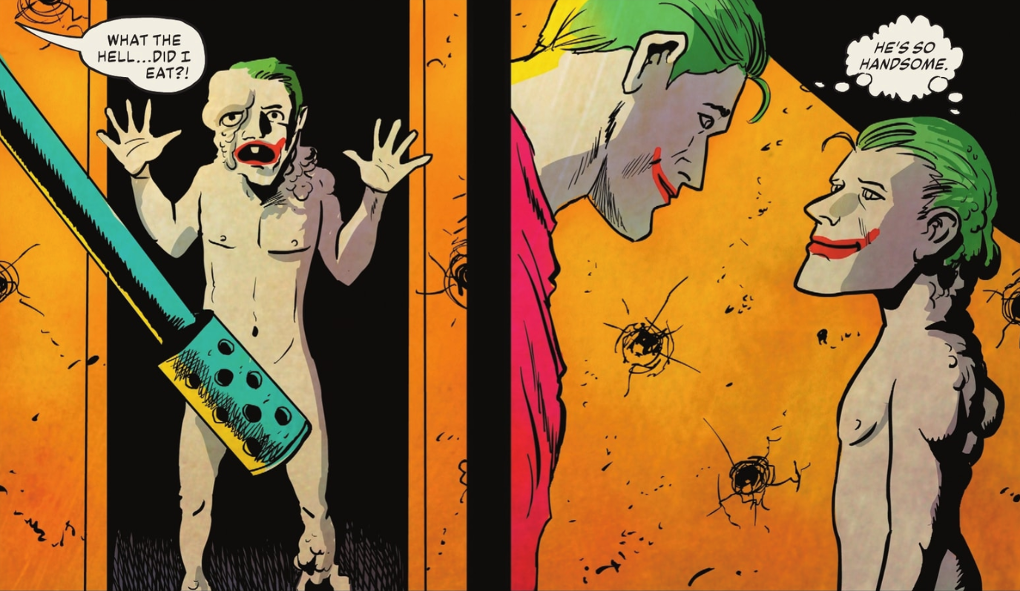 Joker himself got pregnant and gave birth to his child after being hexed by Zatanna when she stops his caper to steal Gotham’s water supply. Casting a backward spell, “On eno esle lliw reve evah ruoy ybab!” — that means, “No one else will ever have your baby!” — causes the prankster to reach nine months in record fashion.

At a natal exam conducted by The Atomic Skull, Joker has the child when he vomits up sentient mud that coalesces into his own Mini-Me that mentally remarks how handsome his dad is. This bizarre reproduction won’t go over well with Batman but, first, here in reality former DC creator Ethan Van Sciver made his disgust known. 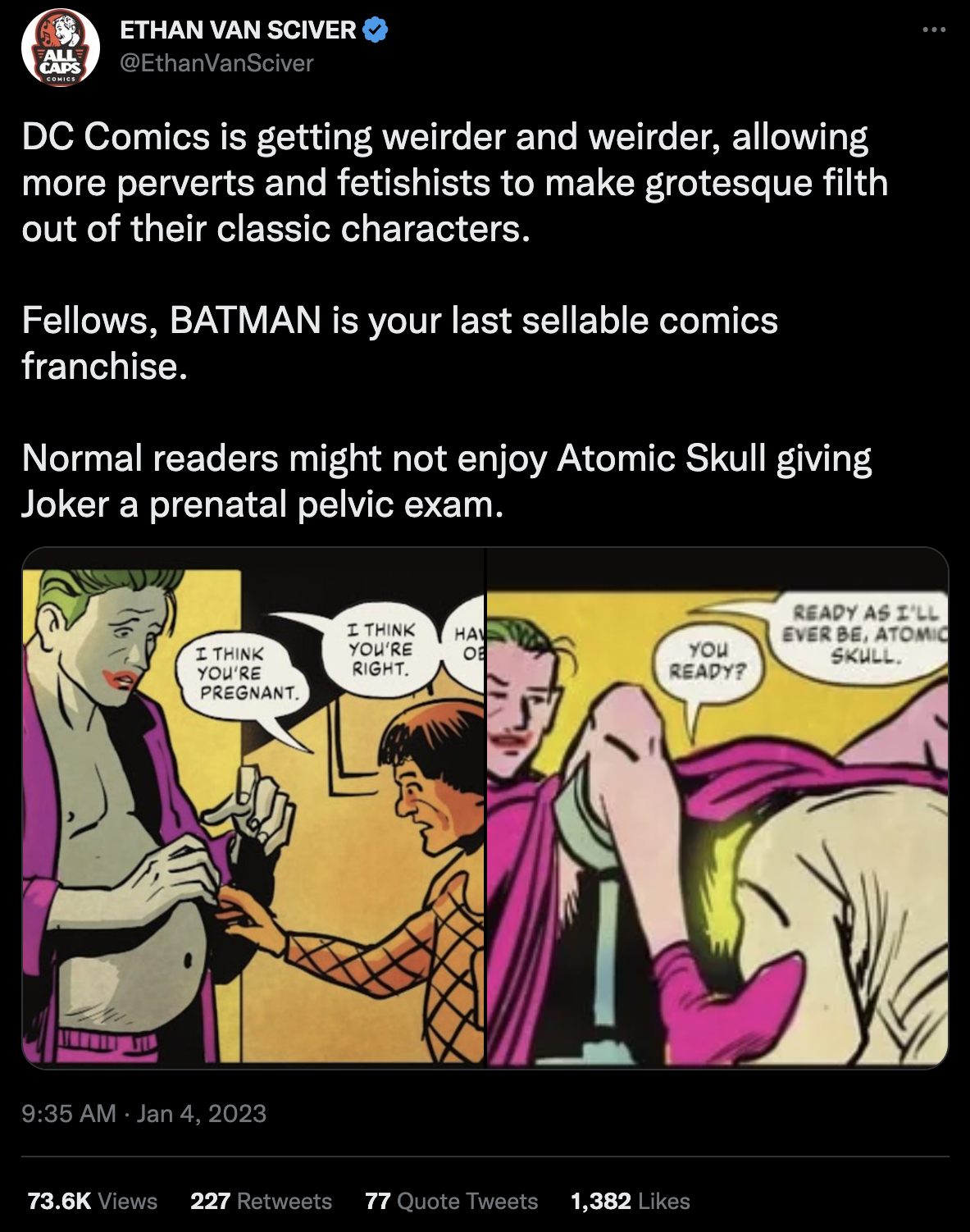 “DC Comics is getting weirder and weirder, allowing more perverts and fetishists to make grotesque filth out of their classic characters,” he tweeted along with screenshots of the story written by Matthew Rosenberg and illustrated by Francesco Francavilla. He also addressed the flailing DC: “Fellows, BATMAN is your last sellable comics franchise. Normal readers might not enjoy Atomic Skull giving Joker a prenatal pelvic exam.”

Comic reviewer Jemal Baraka of the Substack IReviewComics sounded off in the replies with his shocked reaction and analysis. “Comics are for the young and the young at heart,” he wrote. “What 9 year old boy (or girl) wants to see joker get a prenatal check up.” He’d add there are a “Bunch of weirdos at Marvel and DC.” 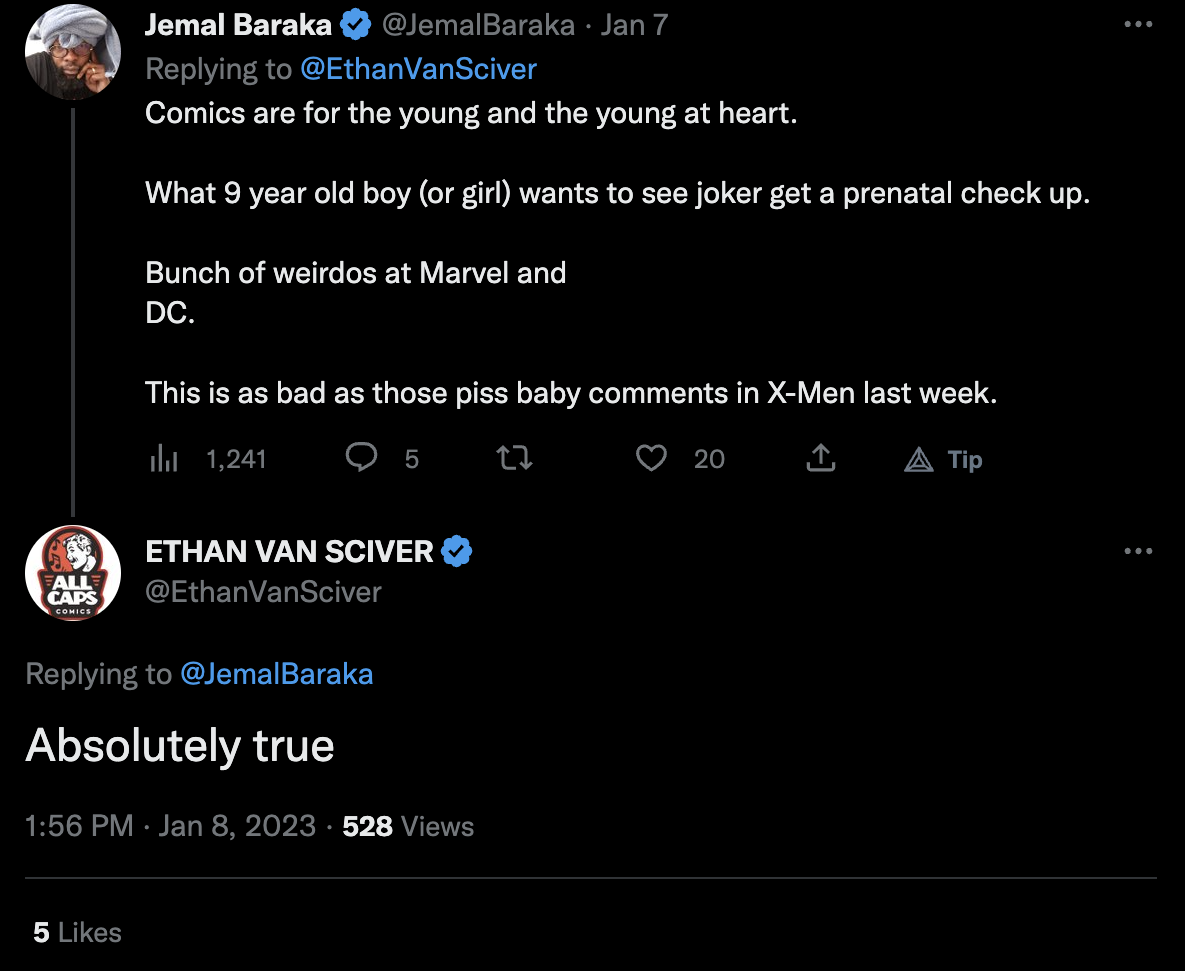 Baraka would continue, “This is as bad as those piss baby comments in X-Men last week.” Van Sciver would concur with this assessment, responding, “Absolutely True.” The Cyberfrog artist/creator mediated more disbelief of the visual in his post’s thread. Asked Twitter user The White Bunny, “Wait this is real?” Van Sciver had to break the news and confirm “Yeah,” it is. 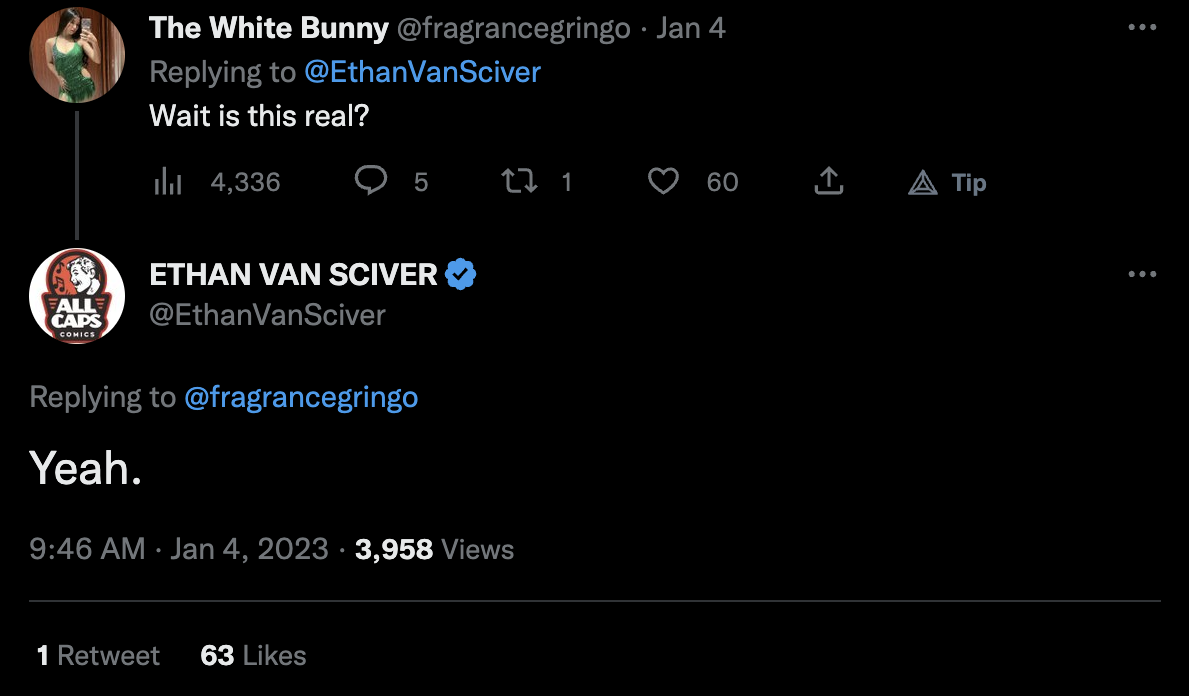 Others came at him from the opposite end of the spectrum to question his outrage. First, Van Sciver was asked sarcastically why he cares about Joker’s pregnancy so badly and he answered, “‘Care?’ I’m laughing at it in disbelief and disgust.” For that, he got a snarky response. “Lol, sounds like you should stop finding inconsequential things to be mad about and get a life.” 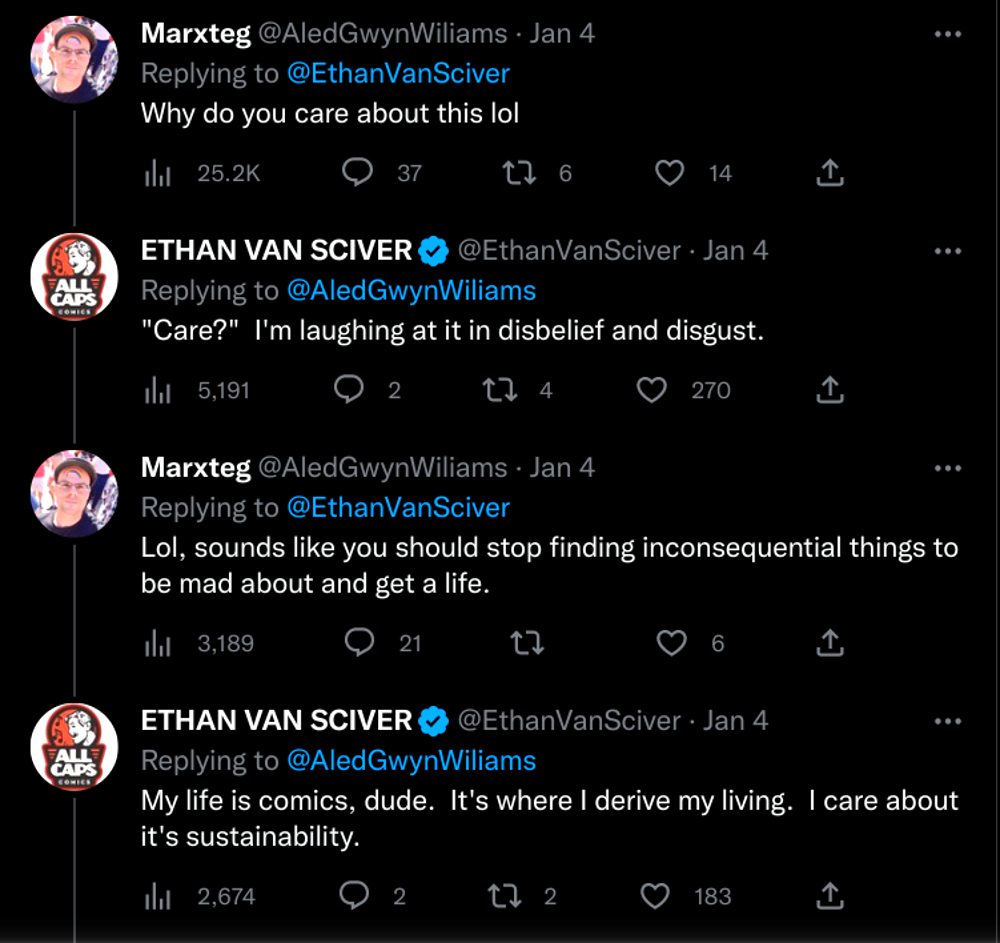 Van Sciver replied in kind. “My life is comics, dude. It’s where I derive my living. I care about [its] sustainability,” he explained. When Twitter user Marxteg didn’t see the correlation whatsoever between someone’s livelihood and Joker having a blob baby, Van Sciver had to further clarify his point. “So perverts making Batman comics repulsive has no effect on the comics business? Ok,” he quipped. 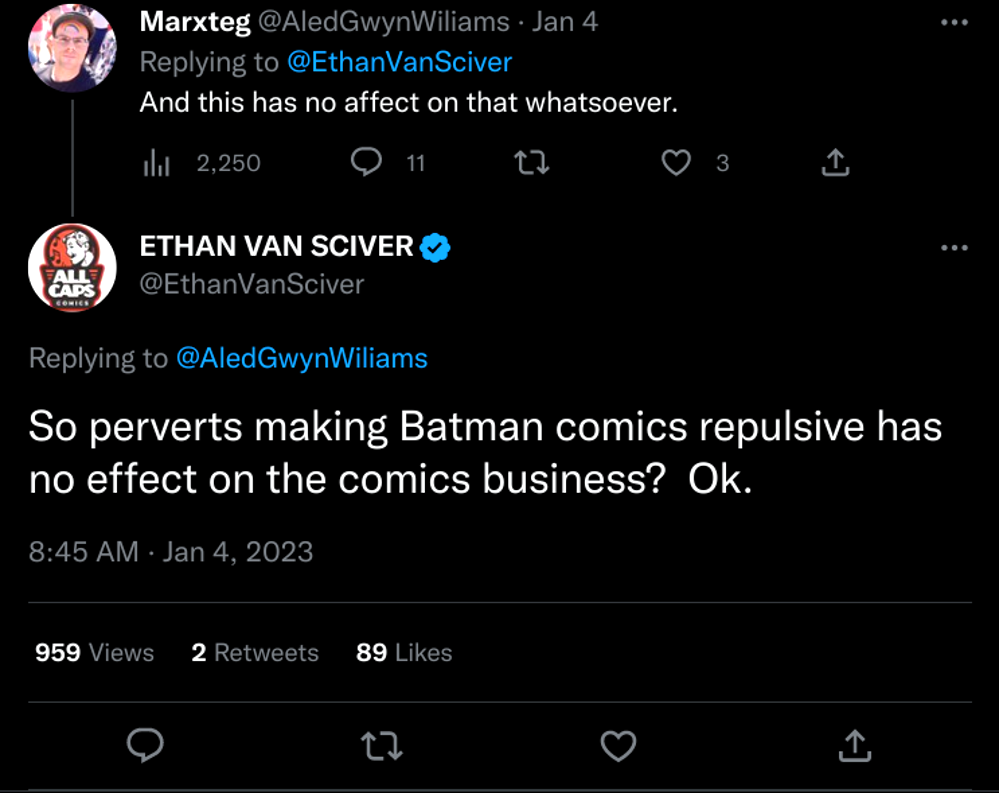 The tenor the same, the banter continued like that with Van Sciver firing back at similar sentiments. Eventually, he was accused of wishing DC would hire him back which, even if there was a chance, is unlikely. Personal politics aside, Van Sciver makes money independently off his All CAPS work and says he does so while DC is “chugging that bleach” and puking out weird imagery. 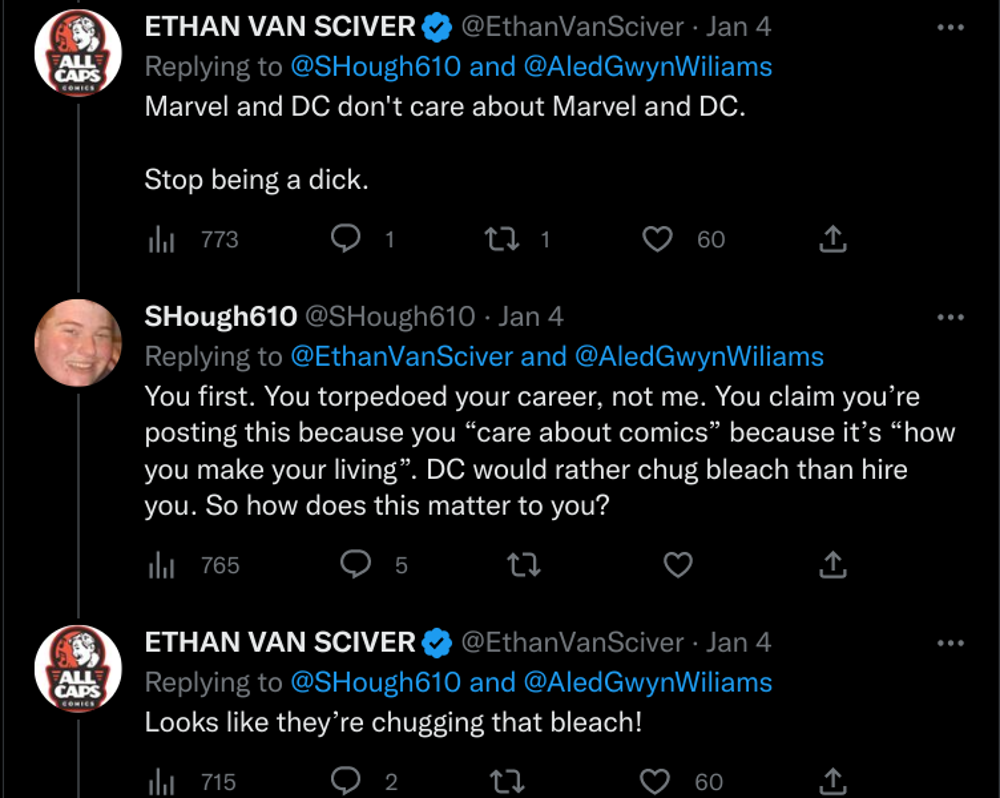