The famed author of the Harry Potter universe, J.K. Rowling, is again taking a stand against what she contends is the damage that transgenderism is causing to society.

In a series of tweets Rowling described a growing ” medical scandal” involving the National Health Service of the United Kingdom and gender identity clinics.

Rowling shared a paper called, Freedom to Think, from Cambridge University on Saturday which shines a light on the major increase in cases of gender dysphoria and requests for treatment within the NHS.

The paper goes on to cover issues between affirmative approach and developmental issues related to adolescent children.

In her initial Tweet, she blasts the NHS Identity Clinics for “functioning as if acting outside the ordinary requirement of good medical and psychiatric practice” and then cites the paper: 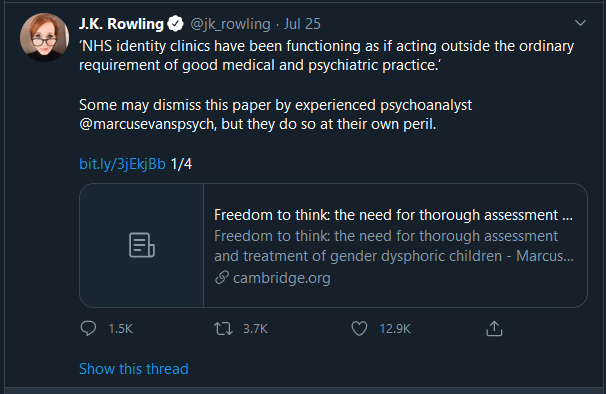 In her following Tweet, Rowling claims that the UK’s health service was “on the brink of a medical scandal,” citing a second paper called Sex, Gender, and Gender Identity: A Re-Evaluation of the Evidence, which discusses the fears held by medical professionals concerning the misdiagnosing of transgenderism in patients: 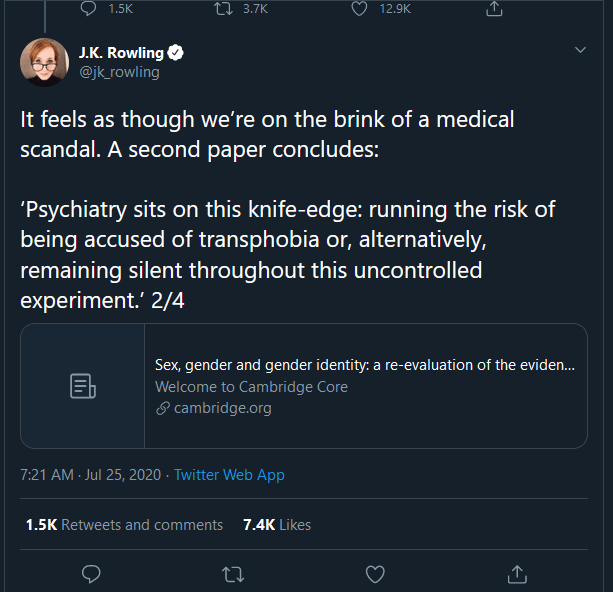 The author of Harry Potter wasn’t done. Since she was on a roll, Rowling decided to dive all in and began to speak about emails she had received from medical professionals.

In their correspondences with Rowling, these professionals claim to be concerned with how the NHS is treating juvenile patients who claim to be transgender.

According to Rowling, “Many have come from professionals working in medicine, education and social work. All are concerned about the effects on vulnerable young people”. 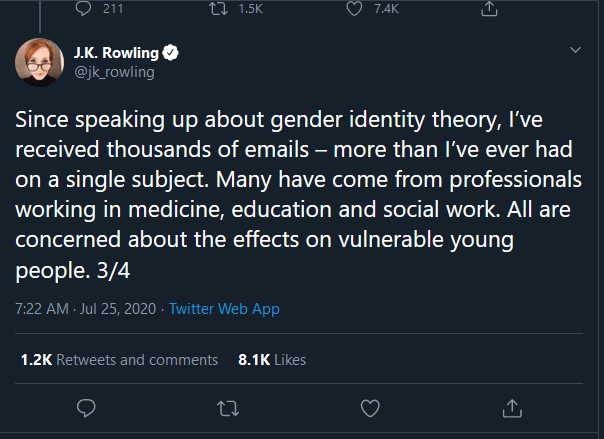 J.K. Rowling would go on to conclude that this was just the beginning. She went to claim that, “The bleak truth is that if and when the scandal does erupt, nobody currently cheering this movement will be able to credibly claim ‘we couldn’t have known.'” 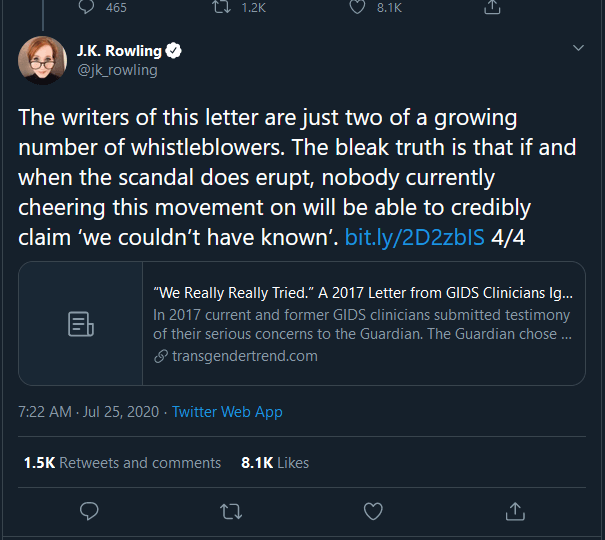 J.K. Rowling has been pushing back against what she views as a transgendered agenda of eliminating the idea that there are differences in the genders which may, in some instances, be detrimental to women.

In December 2019, Rowling first caught flak for publicly supporting professor Maya Forstater and her views on gender, including the opinion that “men cannot change into women.”

From there, 2020 became the year for those on the radical left to attempt to both cancel and silence the author for her views on gender.

In June, the author would again push back against those looking to cancel her and defend the idea of sex and gender, saying in part,  “If sex isn’t real, the lived reality of women globally is erased.”: 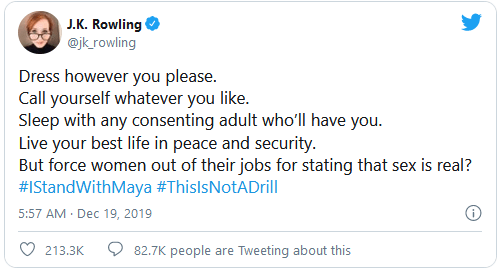 What do you think of J.K. Rowling’s continued stance on gender and sex? Does the author make sense? And do you believe if she continues she’ll be canceled by the mob?