Star Trek and Columbo star William Shatner was attacked on Twitter while live Tweeting an episode of his series, The History Channel’s The UnXplained.

As Shatner followed along with the August 15th premiere of the episode The Great Impostors, the actor Tweeted, “Spokane WA 1985 Billy Tipton dies and paramedics who responded discovered Bill is actually a woman. She had been living as a man for decades.”

Billy Tipton was a popular Jazz musician active in the early half of the 19th century who was born as a woman but masqueraded as a man throughout her entire life and career, only to be discovered as a biological woman upon death in 1989.

Related: Star Trek Legend William Shatner Fires Back Against Twitter Outrage Mob That Accuses Him Of Being A “Bigot”

This brief summary of Tipton’s life and death was soon seized upon by failed congressional candidate and vocal Shatner critic Brianna Wu, who replied “I think this is just a transgender man, William.” 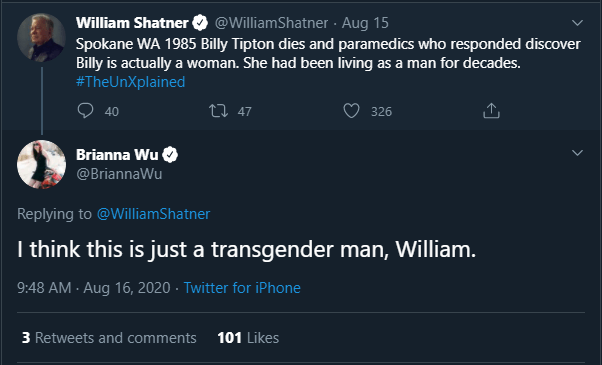 It is currently unknown whether Tipton self-identified as a transgender individual, as the musician left no concrete statements discussing his gender identity prior to his death.

Shatner dismissed Wu’s response with a sharp retort, asking Wu if she had “a catapult to set up on the moon to hurl rocks to destroy countries, dear?” 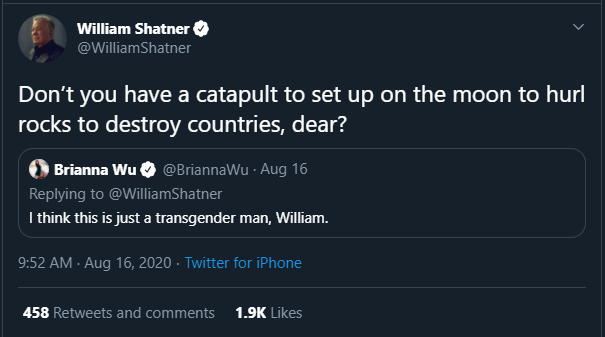 Related: William Shatner Explains Why He Will Not Return To Star Trek

For those who don’t remember, this crack by Shatner is in response to a series of Tweets back in 2017 by Wu who claimed that private space companies would lead them using the moon as a possible staging ground for attacks on Earth.

Shatner’s crack references a pair of 2017 Tweets in which Wu, upset with the expansion of a private corporation into space exploration, claimed that “The Moon is probably the most tactically valuable military ground for earth,” and ignored established laws of physics to argue “rocks dropped from there have power of 100s of nuclear bombs.” 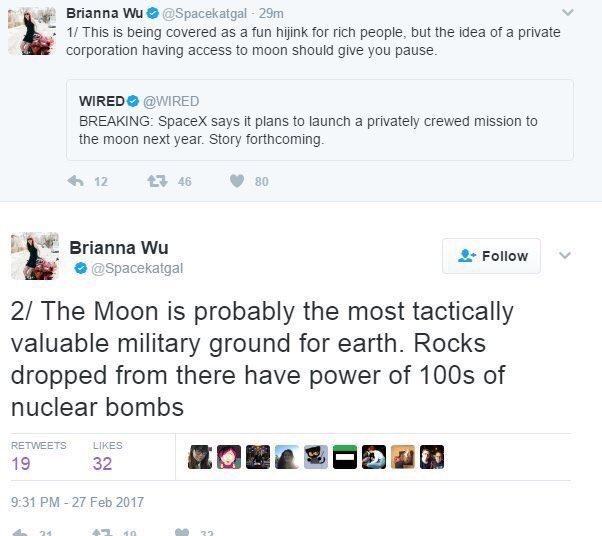 Wu expressed her annoyance with Shatner with the condescending response that “Dear, this is a tired joke and a complete misrepresentation of the facts. I expect this horseshit from 4chan. You’re an allegedly adult man and should know better.” 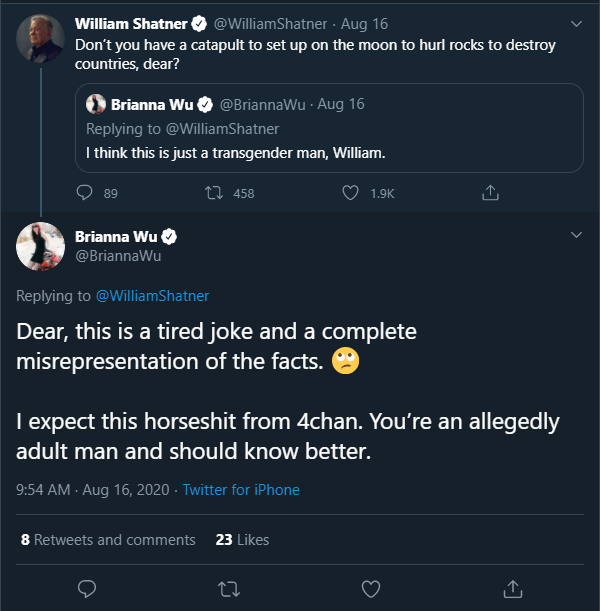 This gender-identity-based discussion soon attracted the attention of DC Comics author Magdalene Visaggio, herself a transgender individual, who referred to a previous Twitter discussion Shatner had concerning the use of the term ‘cis’ in an attempt to shame Shatner for “talking about your feelings about the word cis and not about how you called billy tipton a woman. you’re the victim here, really.” 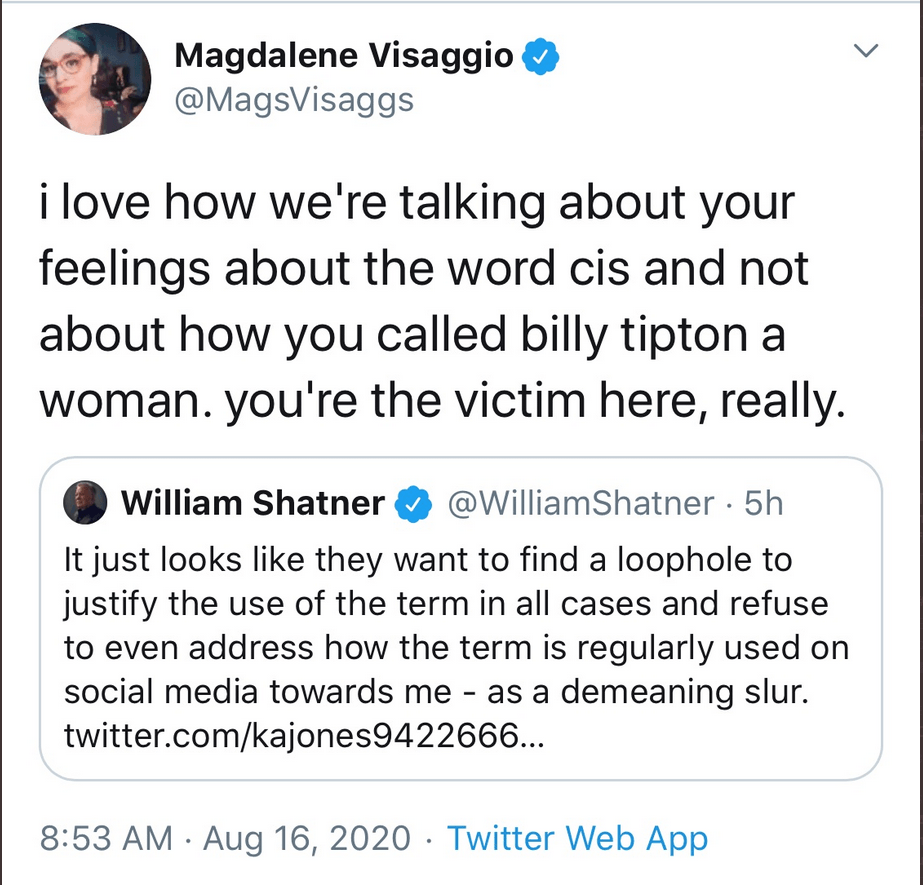 Shatner would explain that there was no malice in his commentary, as he”was live tweeting a show, dear and that’s a direct quote from the show.”

He also clarified that “Billy never told his 5 wives that he was a woman, he said he couldn’t have sex because of a childhood accident. So before attacking me, know your facts troll.” 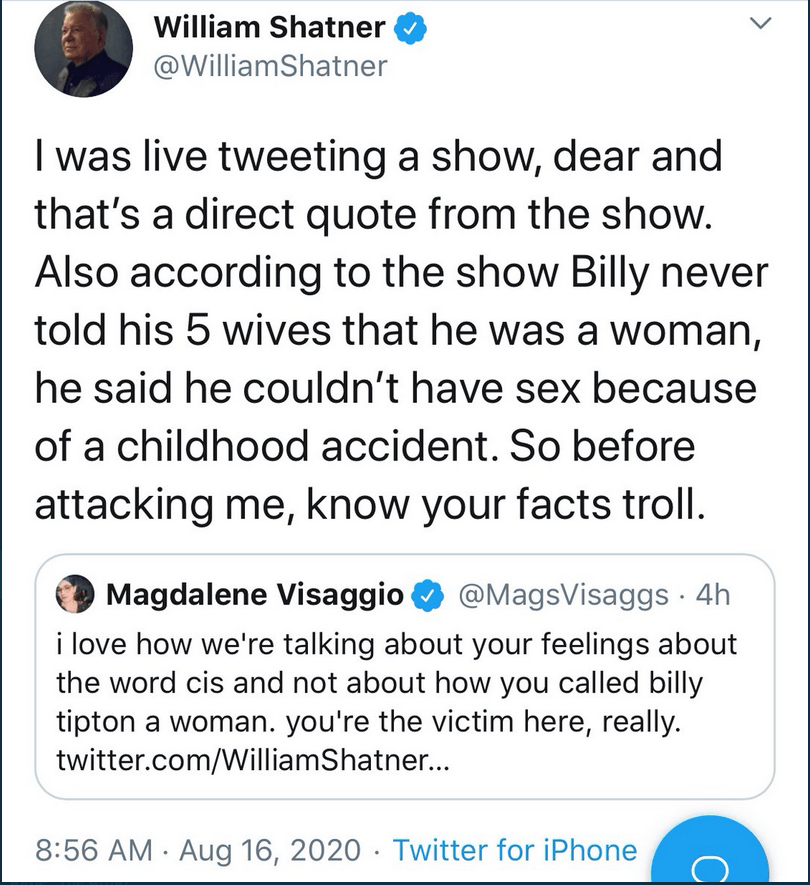 Visaggio refused to consider that she was misinformed on the subject, instead firing back “Okay dude. Your books with Chris Kreski made me think you’d be a little more open to having a respectful discussion about why people are upset. I am very sad to see otherwise. I hope you are otherwise well today.” 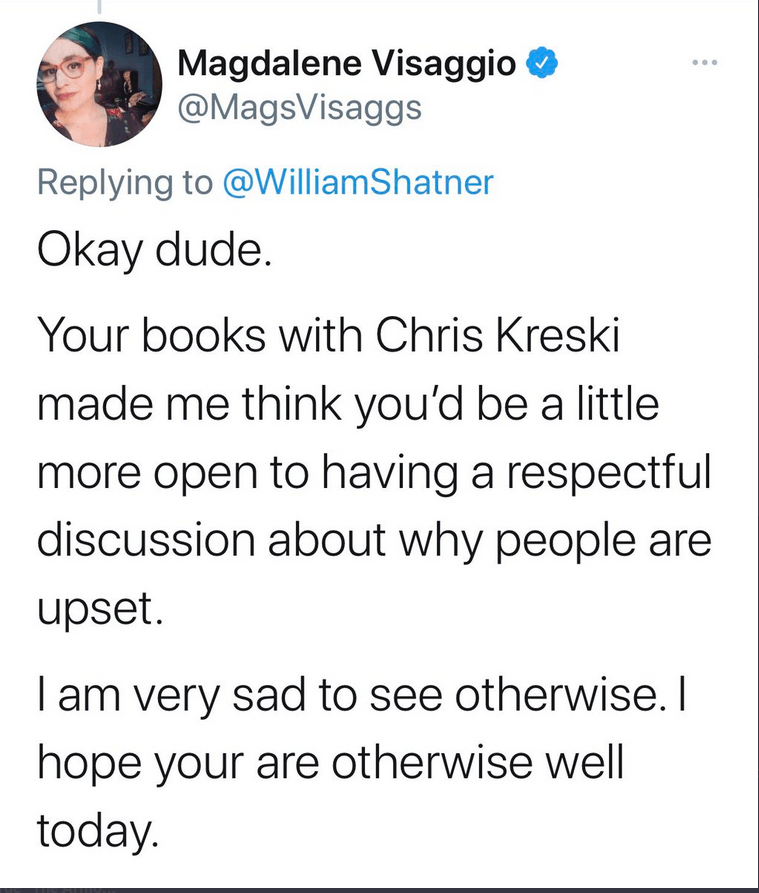 In response to Visaggio’s claim that he was “more open to having a respectful discussion about why people are upset,” another Twitter user presented a screenshot of an expletive laden tirade Vissagio went on against “CIS” individuals in 2017.

Shatner would sarcastically reply with his surprise, saying “Wow, I guess she has an agenda. I’m sure she meant that word [CIS] in the kindest way possible though.” 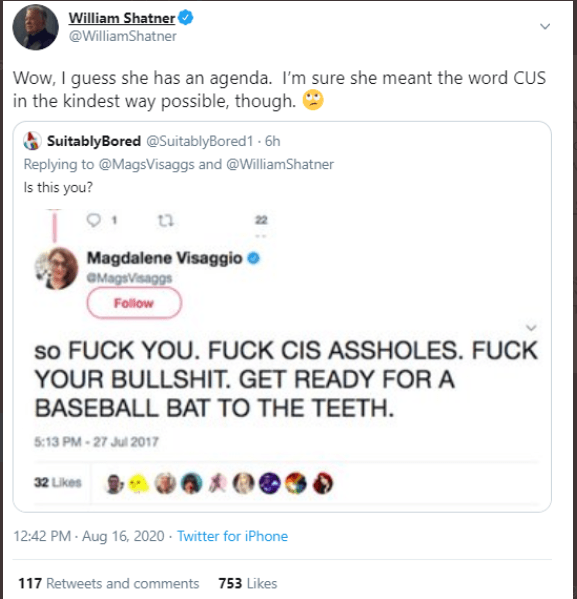 What do you think of this interaction between Shatner, Brianna Wu, and Magdalen Visaggio?  Have you seen The UnXplained? Let me know your thoughts!