James Arnold Taylor, the voice actor who provided the voice behind such iconic characters as Star Wars: The Clone Wars’ Obi-Wan Kenobi and Final Fantasy X’s Tidus, has deleted his Parler account after an internet outrage mob took offense to the content he shared on the platform. 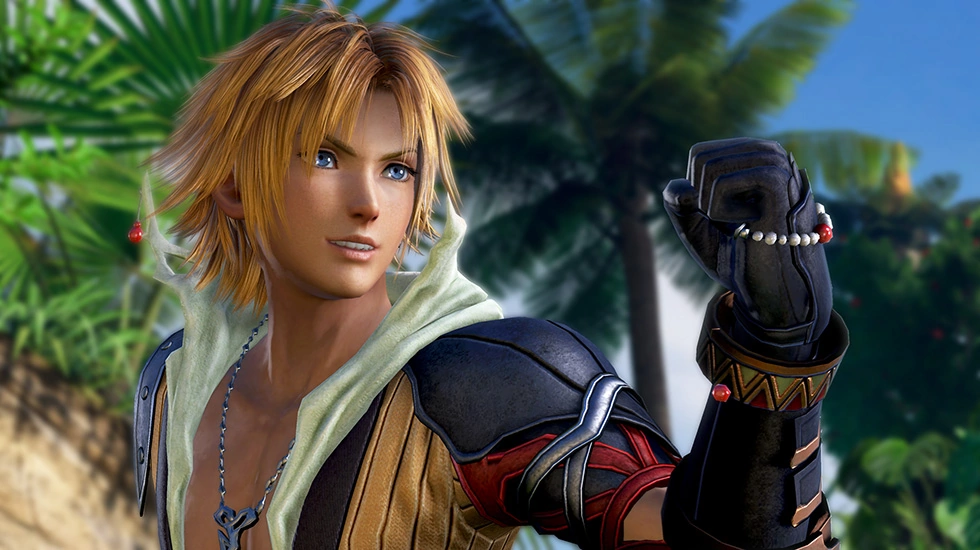 The mob first took notice of Taylor on November 15th, when a user on the infamous ResetERA forums opened a new topic featuring a headline accusing Taylor of “posting racist & covid conspiracies on Parler”.

The opening poster claimed Taylor was “posting some really vile alt-right nonsense” and urged that “this needs to spread far and wide and he needs to be fired ASAP from the upcoming Rachtet & Clank game.” 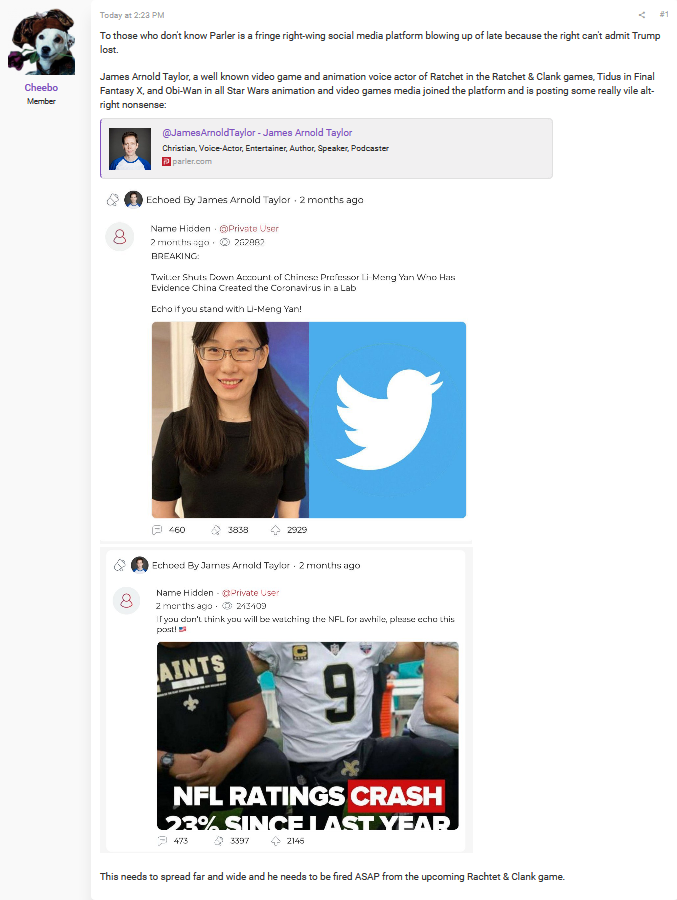 As evidence of Taylor’s supposed ‘alt-right’ beliefs, the ResetERA user pointed to two posts ‘echoed’ by the voice actor, the platform equivalent of a re-tweet, that were critical of two mainstream media narratives.

One post professed support for Li-Meng Yan, the Chinese professor who publicly claimed that the COVID-19 Coronavirus was manufactured in a Chinese laboratory and has since been branded a source of disinformation by the media, and one criticizing the NFL’s ongoing focus on social justice issues, which despite many cultural commentators pointing to this discussion as a positive for the league, has resulted in a significant loss in viewership. 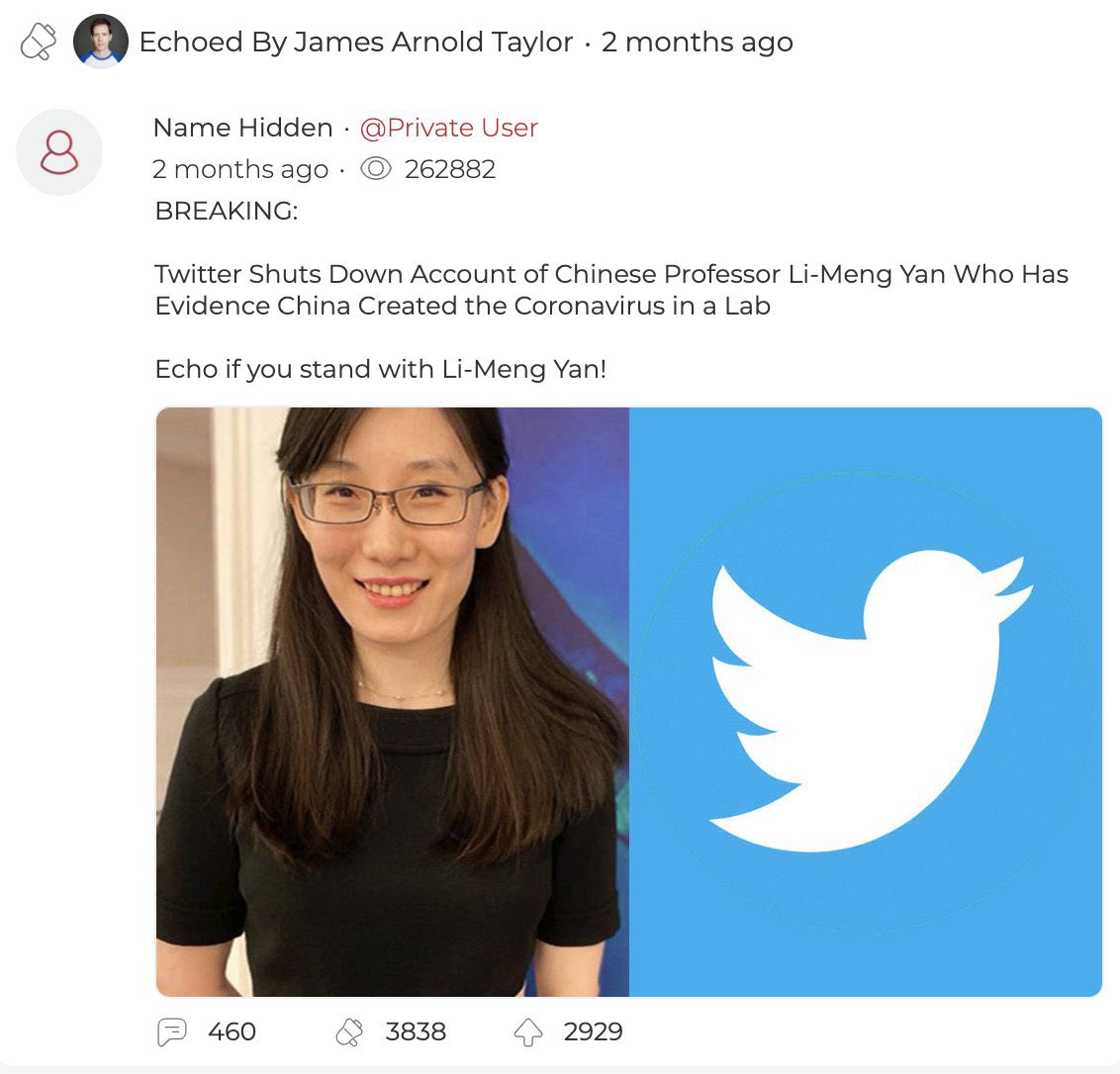 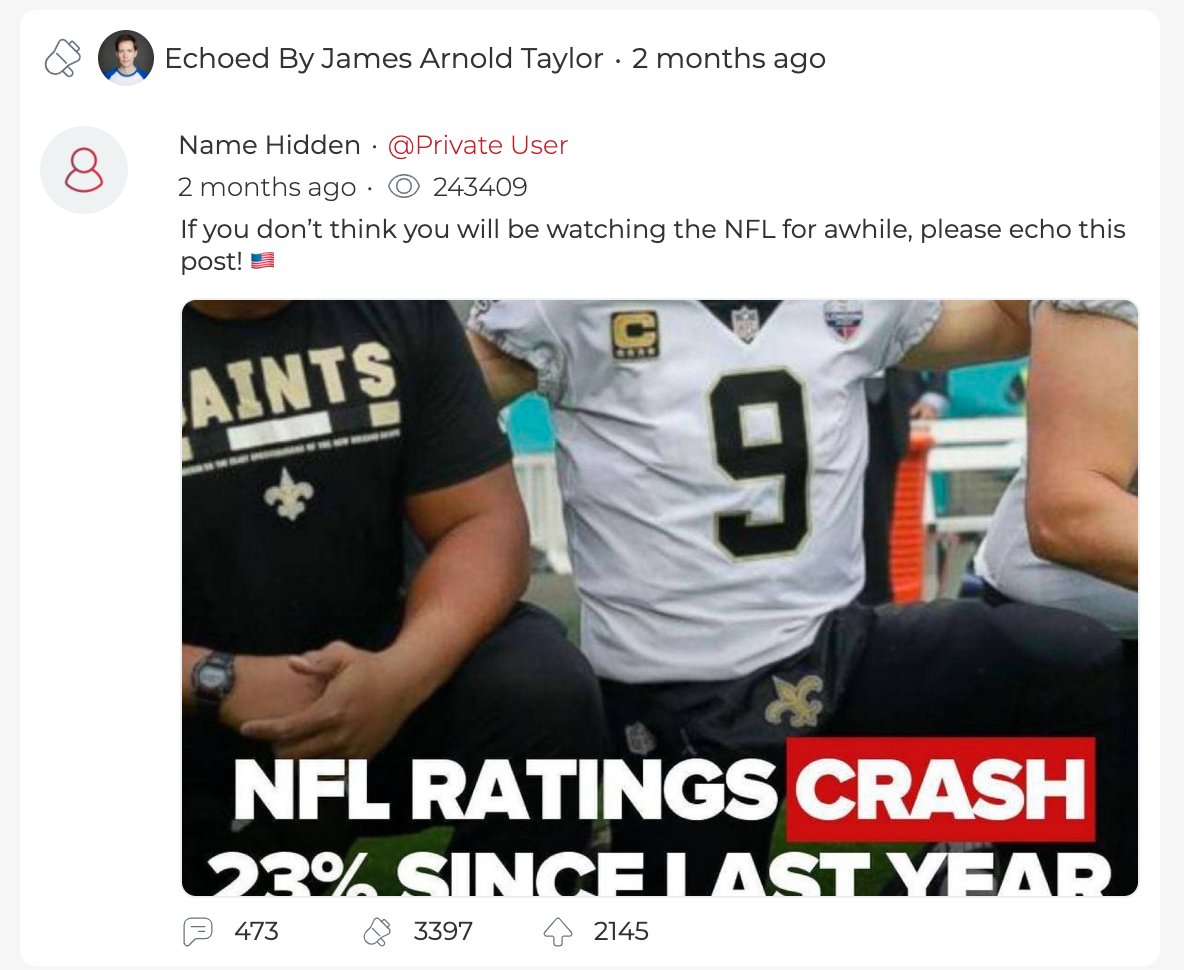 Users also took issue with Taylor’s American patriotism, pointing to a post in which he described how he paints “so many paintings of American Flags.”

“Because the flag represents the freedom we have in America, that is wholly unique to anywhere in the entire world” wrote Taylor. “And we ONLY have the FREEDOM because of BRAVE, SELF SACRIFICING, HUMBLE, and yet PROUD men and women of all colors and creeds throughout the history of this country giving of THEMSELVES no matter the personal cost.” 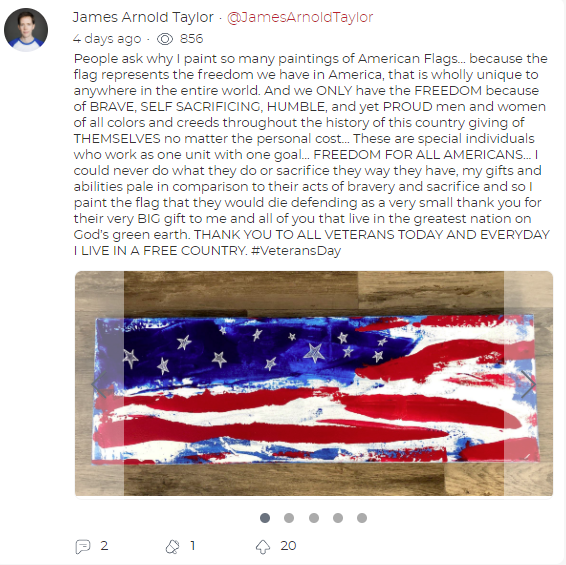 Related: Star Trek Legend William Shatner Fires Back Against Twitter Outrage Mob That Accuses Him Of Being A “Bigot”

These accusations eventually prompted a response from Taylor, who noted that he was “extremely saddened to see this absolutely FALSE claim being made about me” and urged his critics to “look at my #Parler account & see that I post the same things I post here & my other social media platforms.”

“I would ask whoever posted this to contact me and we can discuss this slander,” he added. 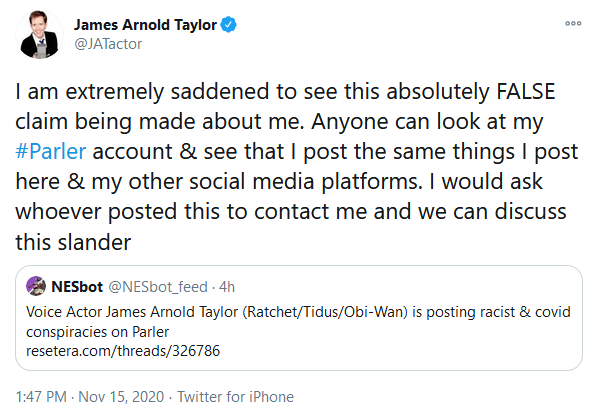 It soon became apparent that Taylor’s confusion over the situation stemmed from the absolutely hyperbolic accusations being made against him, as the voice actor could not understand how his Parler content could be interpreted so negatively and thus assumed that the ‘alt-right’ and ‘bigoted’ content was being posted by an imposter account.

This is made evident by a video message posted by Taylor shortly after the accusations caught his attention, in which he stated that “whatever posts they’re putting up are inaccurate, they’re not mine, and I’m going to try to get the bottom of it, but I don’t know how you get to the bottom of anything on social media these days when people can pose as you or say what they want about you and it doesn’t really matter and people decide, in the court of public opinion, whether you’re guilty or not.”

In regard to the false claims being made about me… pic.twitter.com/MszWGZG911

Taylor’s claims of innocence would also be supported by fellow Star Wars and Kingdom Hearts voice actor Mark Hamill, who responded to Taylor’s video message and asserted that “anyone who knows you knows that these accusations are untrue.”

Hamill then warned Taylor to “beware of Parler,” describing the platform as “a self-described “pro-free-speech” website that promises not to fact-check content as Facebook and Twitter increasingly remove or flag viral fake news and misinformation” and concluding that “fact-checking is important.” 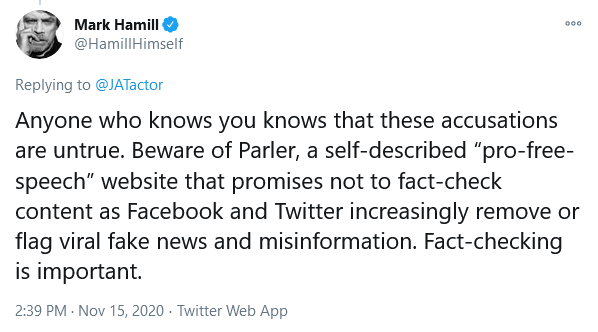 Taylor’s belief that the vile accusations being levelled against him were based on a duplicitous twitter account, and thus his general misunderstanding of the mob’s impotent outrage, was then further evidenced by his argument to a Twitter user that “I’ve not said I don’t have a Parler account, I said whatever is showing up on it isn’t mine.”

When another user, @JasonBall34, asserted that Taylor had “”echoed” some bad psots”, the voice actor stated that he could not “find those there” and announced that “to avoid any further trouble I’ve deleted my account.”

“It wasn’t the platform I hoped it to be anyways,” lamented Taylor. “it was all political and no one seemed interested in my posts about Star Wars and such anyways.” 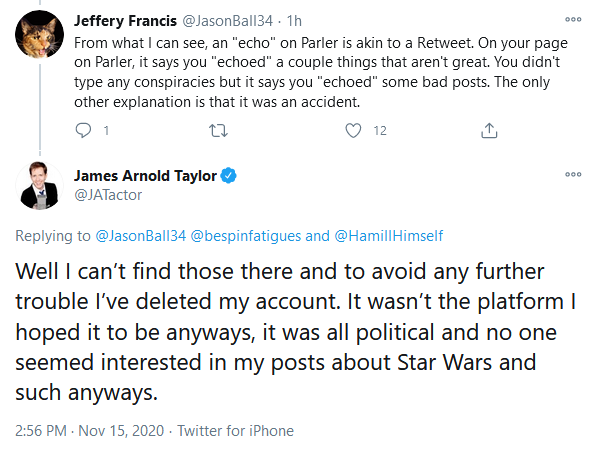 What do you make of the outrage against Taylor? Let us know your thoughts on social media or in the comments down below!