Star Wars story group writer Matt Martin recently admitted that, despite being an allegedly integral part of Disney’s efforts to further develop their own personal canon, he was completely unaware of why the B-Wing received its signature name.

On November 18th, EA announced its first content update for the recently-released Star Wars: Squadrons, which would bring not only a new map, Forstar Haven, to the multiplayer-heavy flight-combat simulator, but also four new ship components and two new starfighters for players to choose from.

When the release drops in the coming months, pilots of the New Republic will be able to take to the stars in an A/SF-01 B-Wing starfighter, while Empire loyalists will gain access to the TIE/d Defender, a TIE variant first developed for LucasArts’ 1994 release, Star Wars: TIE Fighter. 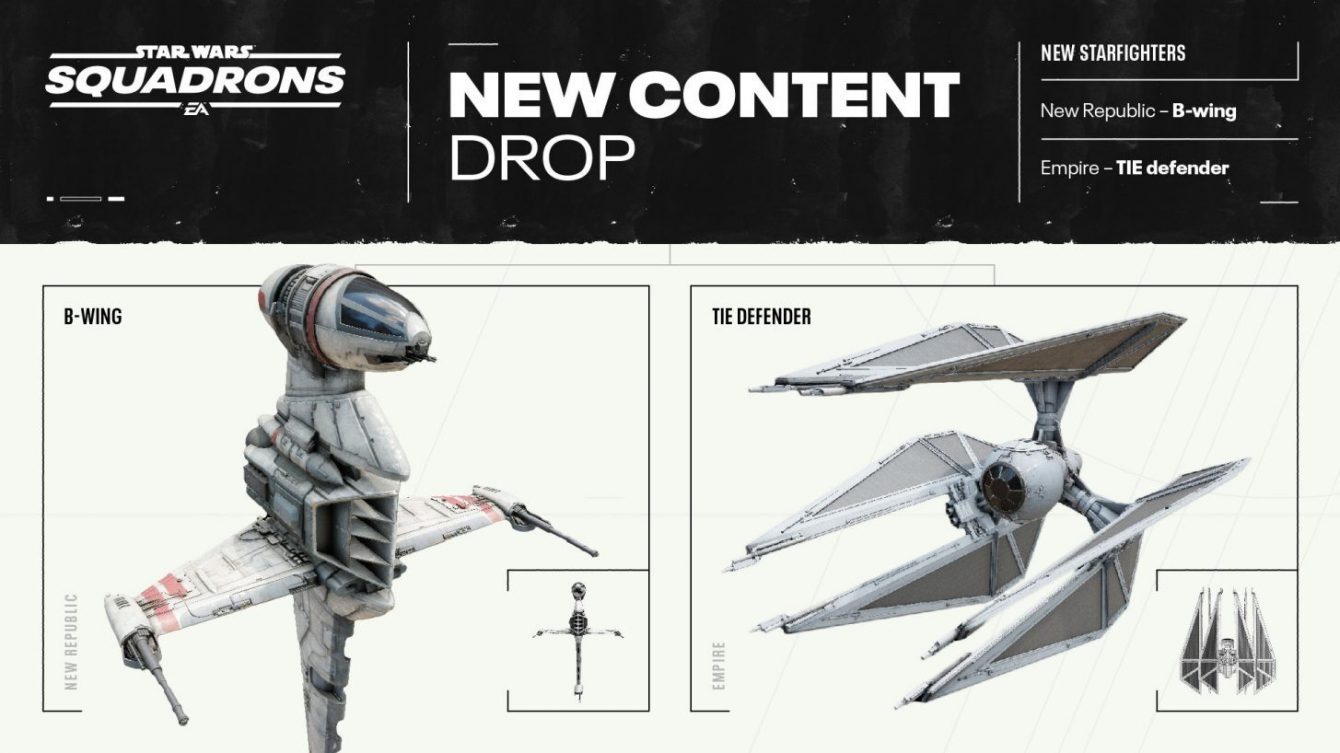 Following this announcement, Martin jokingly asked if “all you weirdo B-wing stans [who] got your wish” were “happy now!?!”, while also praising Star Wars: Squadrons development studio Motive for working to implement “probably the hardest Star Wars ship to work with”. 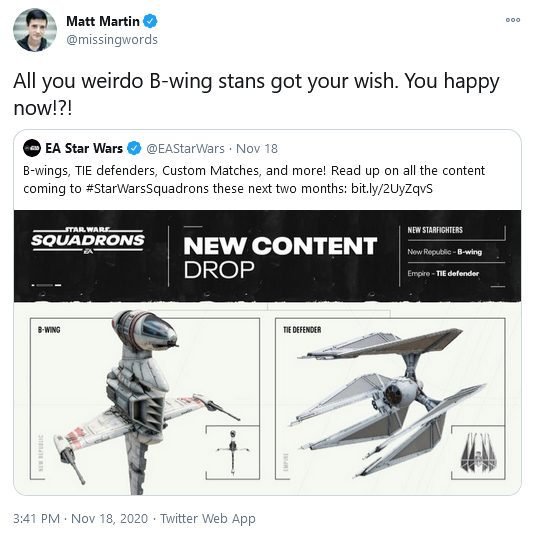 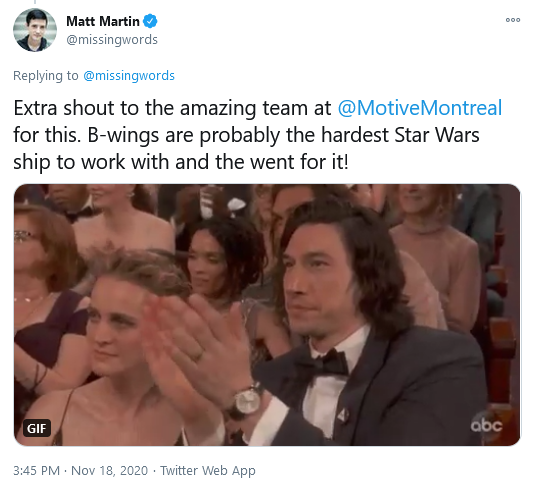 As is common whenever the B-Wing is brought up in conversation, given the ship’s idiosyncratic design and designation, a fan soon asked Martin “where is the b in a b wing”, to which Martin explicitly stated that he was unaware of the reason the ship was named as such.

“I guess if you look at it from the side it’s sort of like a B?” speculated Martin. “I don’t know”. 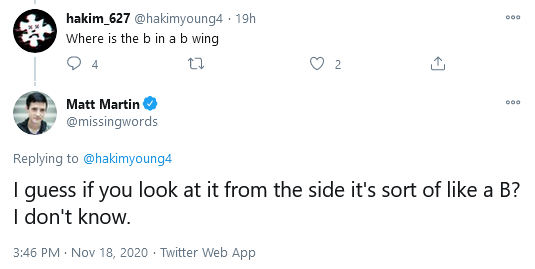 While the lack of knowledge regarding one of Star Wars’ less-featured starships would not be surprising for a casual fan or even a long-time fan whose interest in the series is focused more on the struggle between the Jedi and the Sith, but as artist Steven Wayne then pointed out to Martin, it is “literally [his] job to know this kind of stuff”.

“Took all of five seconds to look it up,” observed Wayne, alongside an excerpt from the Wookiepedia entry on the B-Wing. “And I’m not even in a Story Group.” 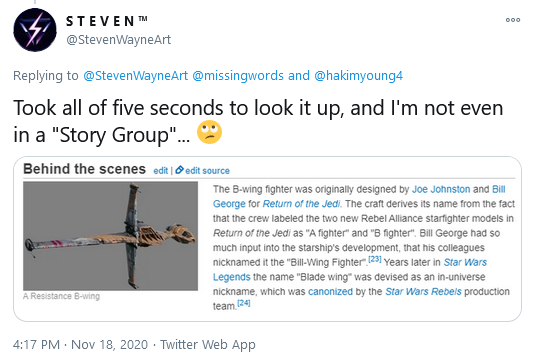 The Wookiepedia entry on the unique-looking starfighter explains that “the craft derives its name from the fact that the crew labeled the two new Rebel Alliance starfighter models in Return of the Jedi as “A fighter” and “B fighter,” and was named as such because Industrial Light and Magic visual-effects artist William “Bill George” “ had so much input into the starship’s development, that his colleagues nicknamed it the “Bill-Wing Fighter”.

Disney would eventually canonize ‘Blade Wing’, an in-universe nickname developed in the original Star Wars expanded universe, as the ship’s official designation, even canonizing the name in the Star Wars Rebels episode, ‘A Princess on Lothal.’ 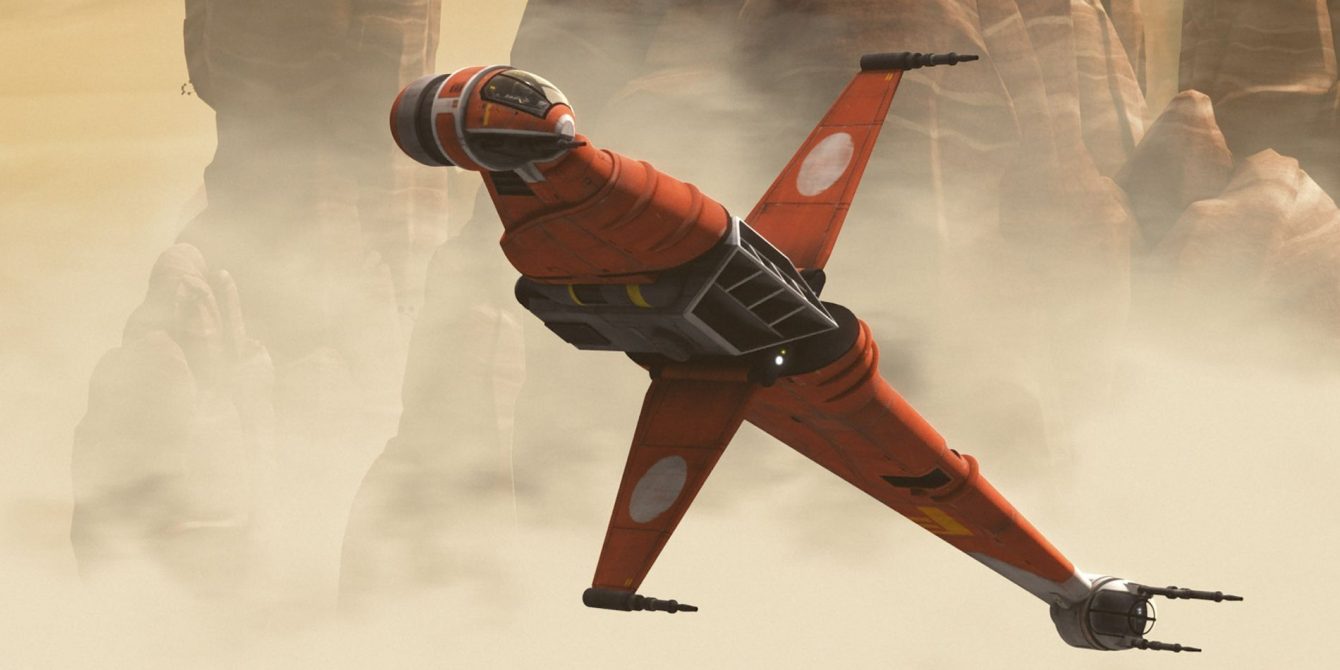 Of course, it should come as no surprise to Star Wars fans that Martin is unaware of such a mildly-important piece of Star Wars lore, as the story group writer previously asserted that the universe was “all fake anyway so you can choose to accept whatever you want as part of the story.”

What do you make of Martin’s lack of B-Wing history? Is it a glaring red-flag, or an acceptable gap in his knowledge? Let us know your thoughts on social media or in the comments down below!