An Animal Crossing: New Horizons player is facing a wave of harassment and rampant accusations of racism solely for wearing a ‘bun’ hairstyle on her white-skinned avatar, with critical race and social justice theorists claiming the player is appropriating black culture. 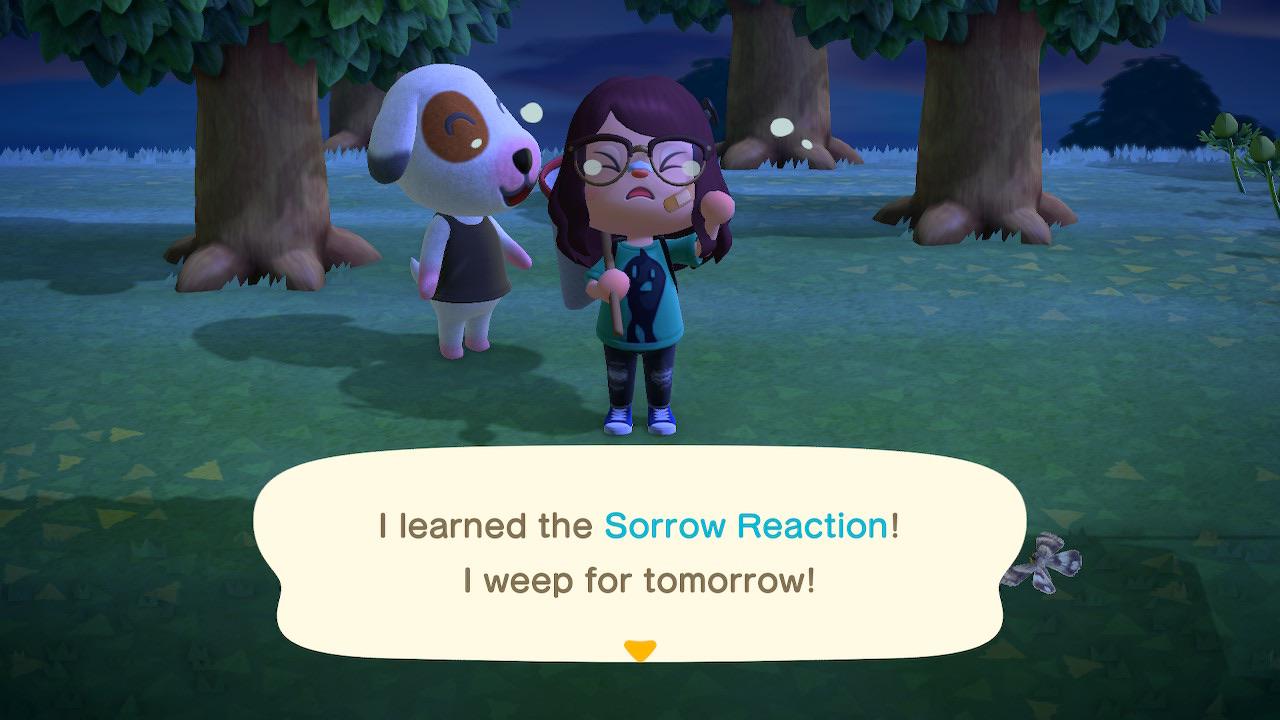 On November 20th,  Twitter user @stardewleaf shared a screenshot of her AC:NH character to their account, showing off both her in-game home and her avatar’s new hairstyle.

“Cute space buns :3,” @stardewleaf captioned the screenshot, most likely in a nod to the iconic hairstyle worn by Princess Leia Organa in the Star Wars series. 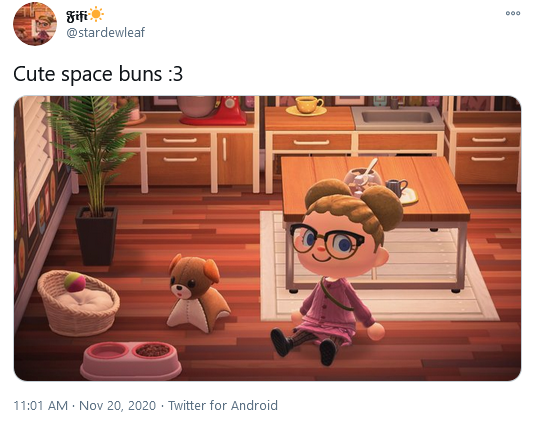 Near immediately following her sharing of the screenshot, @stardewleaf was descended upon by critical race and social justice theorists, who began to accuse the player of racism, cultural appropriation, and general bigotry, based entirely on the mere fact that her avatar was white-skinned.

This caused an issue for these theorists, as according to their bad-faith criticism, they believed that the hairstyle was included specifically and solely for use by black individuals, specifically black women, despite the obvious fact that Nintendo programmed the hairstyle to be available to any and all avatars.

Interestingly, it appears that, overwhelmingly, a majority of those who took issue with @stardewleaf’s use of the bun hairstyle were high-school to college-aged white individuals, rather than actual members of the supposed offended demographic. 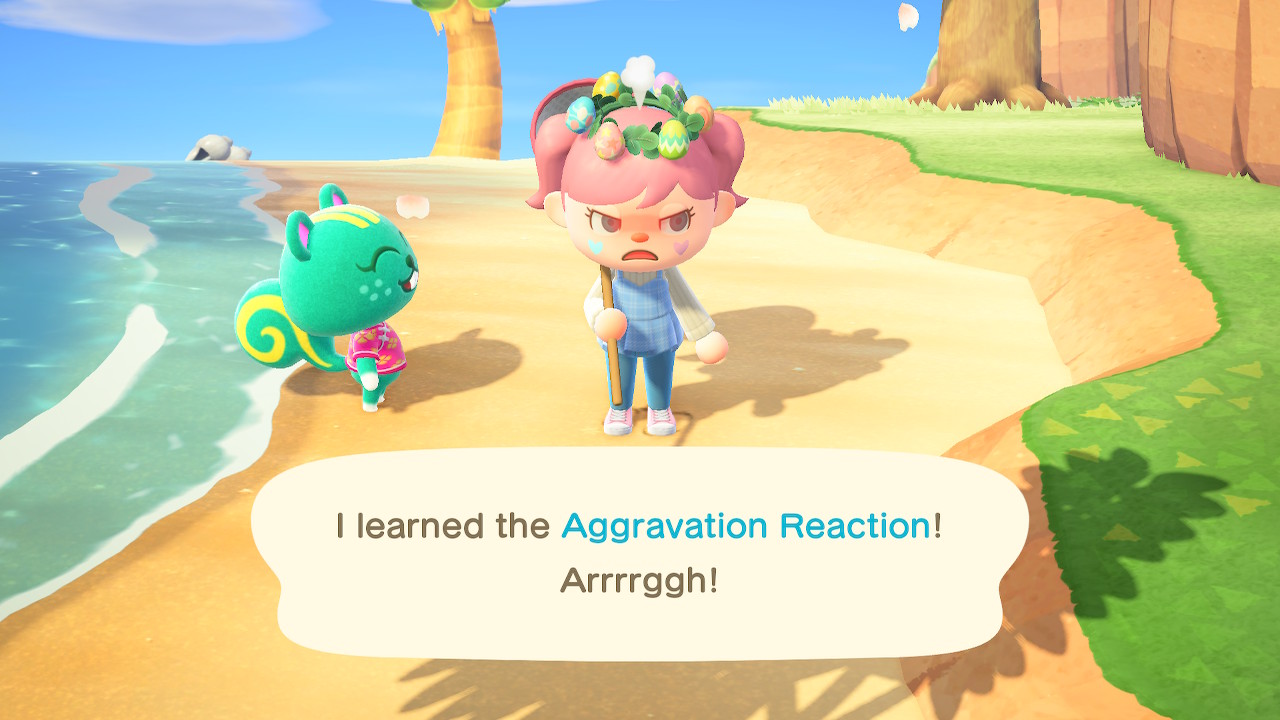 One of the first and most prominent voices to take up the fight against @stardewleaf’s personal choice of hairstyles was @schrutehorizons, who played a key role in sparking the outrage mob when they took notice of the screenshot and replied that the buns “are meant for black girls.. us white girls cannot use them so i advise you to change them before its too late…”

“Too late? Until what happens?” asked another user, to which @schrutehorizons proudly asserted “till others cancel her and put her name out there.”

When asked if this mean they wanted “others to dox her for wearing a hairstyle”, @schrutehorizons threateningly declared that “she shouldn’t be wearing the hairstyles if she’s white, simple as that. 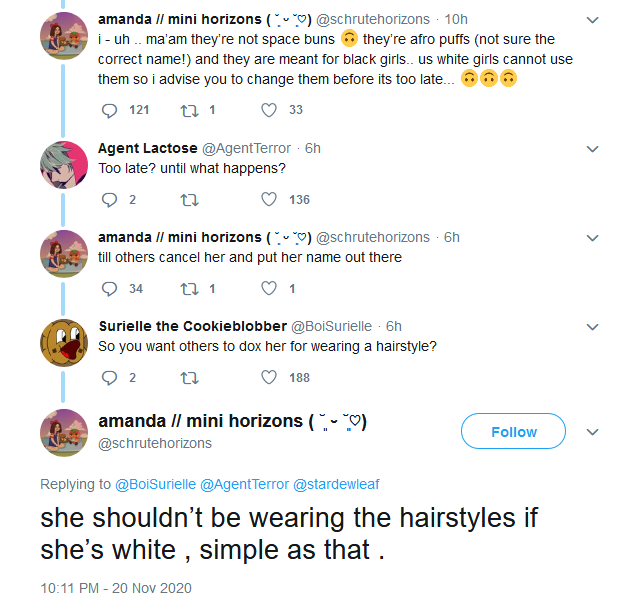 “Hey, these are not called space buns these are actually called Afro puffs, not buns.” Asserted @Ella15486780. “Could you please stop being rascit [sic] with the new hair topic and be thankful that we have new things?!!”

In an absurdly hyperbolic moment, @Ella15486780 concluded that “This is a KIDS GAME and LITTLE ONES do not need to see this content.” 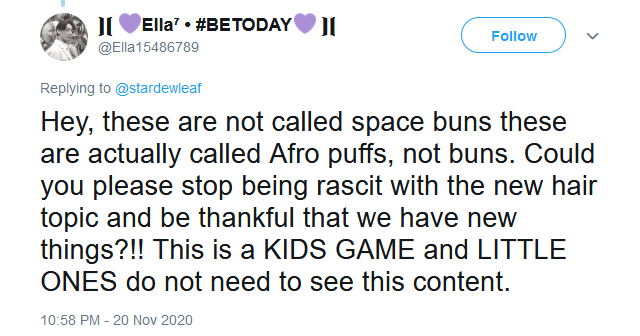 “SpAcE bUnS” she knew wtf she was doing,” @_TEB2_ presumed of @stardewleaf’s reasoning for posting the picture. “all the ppl saying “it’s a video game” under the twt have no common sense… like it’s not that hard???? to not appropriate our culture?????” 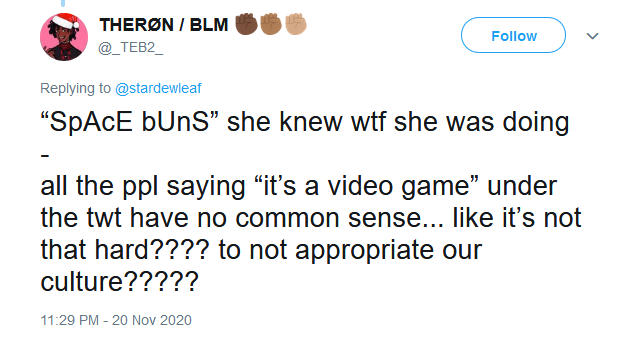 One particular opinion shared by @stardewleaf’s critics was that the inclusion of the hair style was the result of an going ‘fight for representation’, thus white players should refrain from using any item or style that can even be remotely associated to black culture.

“Very, very few white people could pull this off,” wrote @games_tray. “Black people have been fighting for more representation, white people get it for free.  Stop using Black hair if you’re white.” 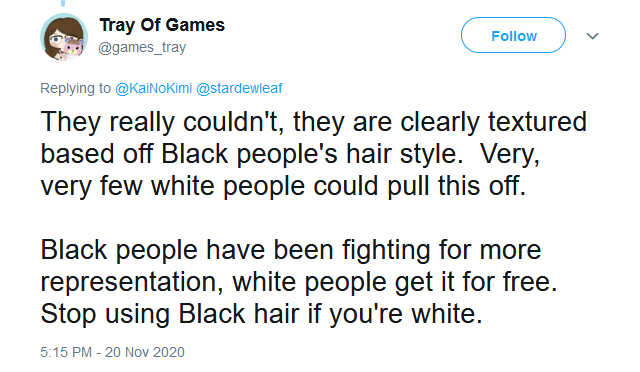 @Honeydew_OwO asserted that “These are for POC NOT for people that are NOT POC,” further stating “this represents BLACK PEOPLE, please stop using them.”

“This represents us, not you,’ they concluded. 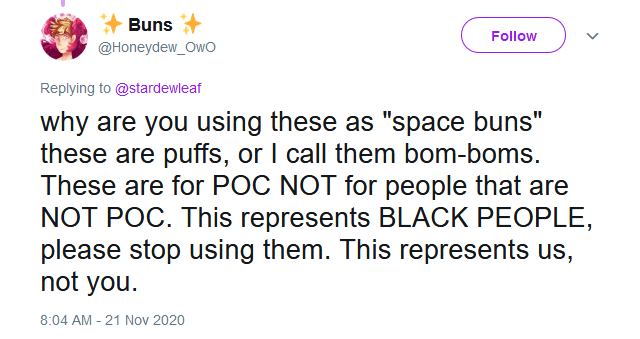 “how abt we let black people enjoy one thing without wanting to take it for yourself,” facetiously asked @6sleepyquackos.

Conversely, in a counter-response to the hate and vitriol directed towards @stardewleaf, a large amount of oppositely-minded Twitter users poured out to show their support, encouraging the player to keep using whichever hairstyle they would like and expressing their embarrassment at how others took offense to such a non-issue.

@Squidduce took to the public sphere “to say everyone in this comment section getting mad over cute space buns is honestly just really bored of being so privileged that they need to make up some sort of bogeyman to fight against to make their [sic] sad selves feel better.” 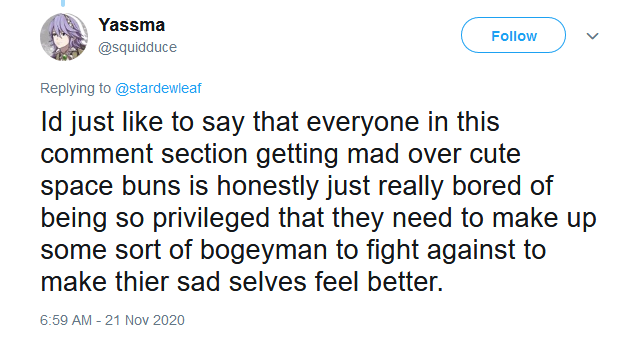 “It annoys me,” explained @Rebecca_Kenyon, “im white but have tight curly hair but apparently i cant use this hair style because im not black.”

“Wtf is wrong with people, they just want to start a battle no one asked for,” she concluded.

@PixleLikesFruit found herself fed up with the entire situation, exhausted exclaiming that “AS A POC THIS ENTIRE COMMENT SECTION BRINGS ME NOTHING BUT PAIN JUST LET PEOPLE DO WHAT THEY WANT GOD” 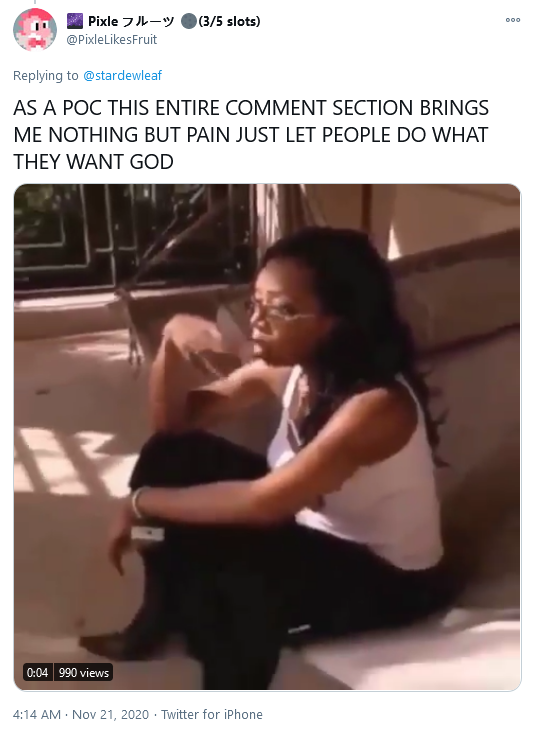 In the face of these criticisms and attacks, @stardewleaf has since pinned the screenshot to her Twitter profile, changed her profile picture to feature the specific image, and has thanked “everyone who doesn’t hate my space buns” for their support.

What do you make of this outrage? Share your opinion on social media or in the comments down below!