A new rumor claims that not only will HBO Max’s upcoming Green Lantern series feature a new ring-slinger as one of three series leads alongside classic Lanterns Alan Scott and Guy Gardner, but that the series will also place a heavy emphasis on ‘woke’ storytelling.

The first rumor surrounding Green Lantern’s casting was published on November 19th, when The Illuminerdi announced that they had “uncovered exclusive info about the characters and direction of the upcoming Green Lantern HBO Max series”, specifically alleged character details regarding the series’ leads, Lanterns Alan Scott, Guy Gardner, and new character Bree Jarta. 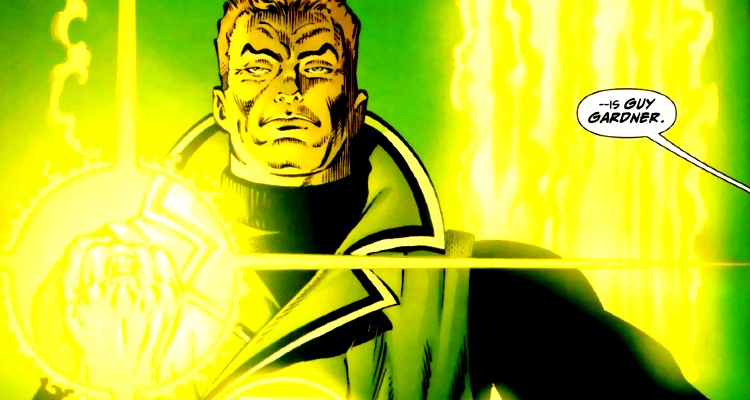 Guy’s description reveals he is the testosterone-fueled white-male foil to the other cast members, described as a “hulking mass of masculinity”, and hyper-patriotic, like a classic action hero or pop-culture icon of the 80s.

The description also says Guy is a “likable” family man who just also happens to be a “hot-tempered” partier and alpha male accused of hiding his pain.

“Guy Gardner: White Male, 30’s. A hulking mass of masculinity, as rendered in the comics. Guy is a personification of the hyper-patriotism found in the 1980’s that birthed Hulk Hogan and Rambo. However, Guy is still likable. He might act foolish, but he is not a fool. Guy loves his daughter and wife with all of his hard-partying, fast driving, hot tempered heart. But like many alpha males, there is a deep undercurrent of pain driving it all.” 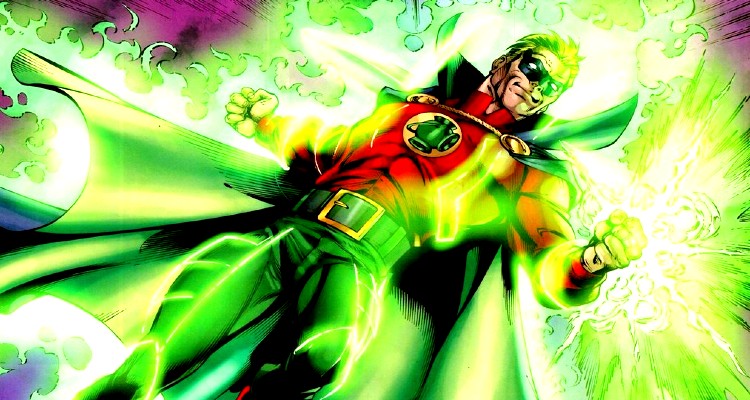 Alan Scott’s breakdown makes it clear he is gay, as previously reported, and that the show will try to capture the specific image of his Golden Age incarnation, but only as a narrative device with which to explore his internal struggle with his hidden sexuality.

Here is the description:

“Alan Scott: White Male, 28 years old. From the outside, Alan is the model of early 1940’s. The image of a G-Man. Alan is handsome, clean-shaven and well dressed without a hair out of place. He has spent his young life trying to personify truth, justice, and the American Way. He is already a household name in L.A. and is seen as hero thanks to positive press coverage. However, for all of Alan’s honesty, there is one huge lie that follows him. He is a gay man. A fact that, in his era, could cost him his job, or even his life.” 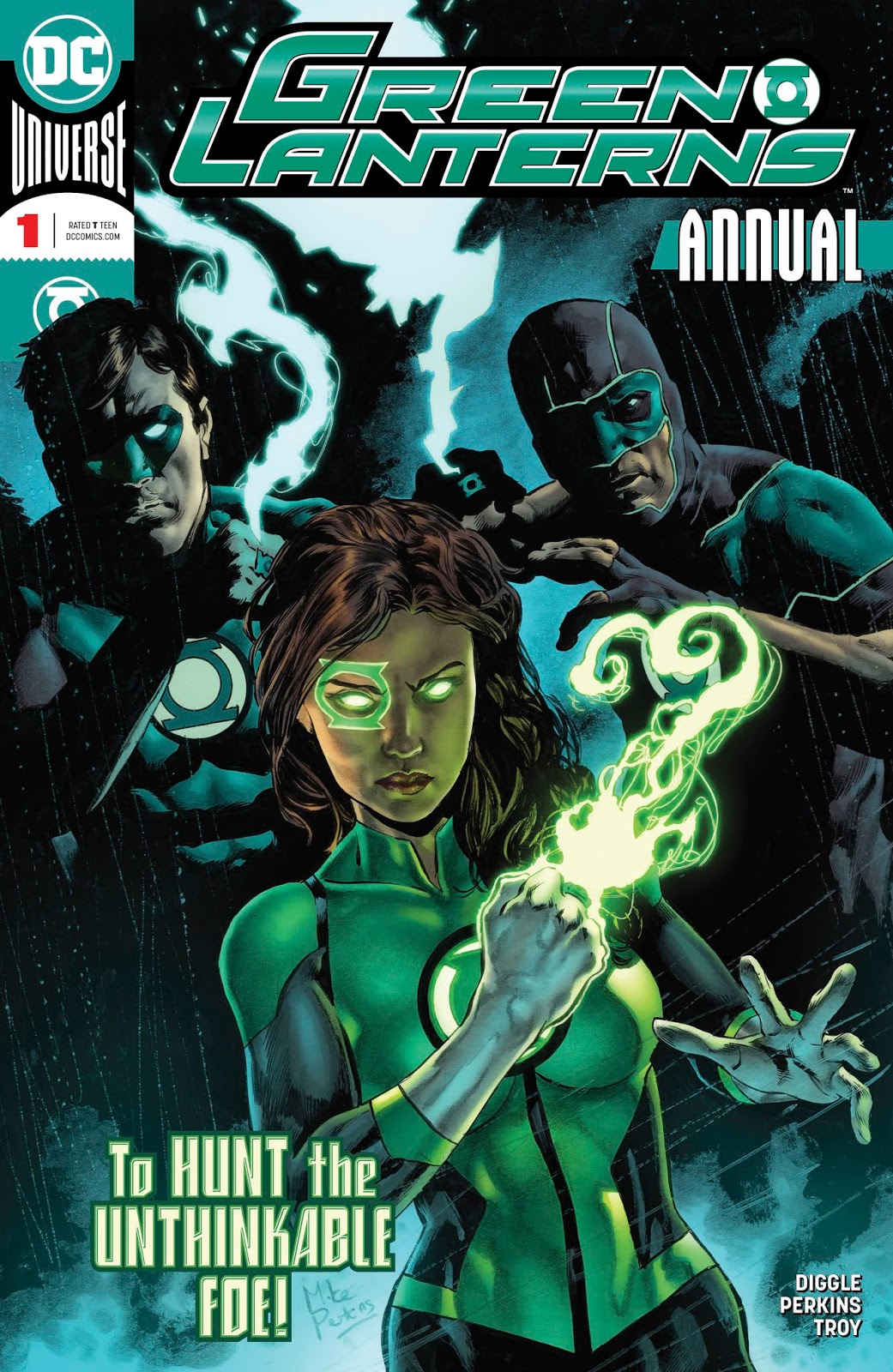 Then there is the HBO Max original creation Bree Jarta, Guy Gardners half-human, half-alien Lantern partner who, according to her leaked character breakdown, works hard to ignore her human side, was raised in an “enlightened” extraterrestrial society, and is a true believer in the Corps’.

Just as they play up Alan Scott’s orientation, the series will do the same with Bree Jarta and her skin color, as the half-human and half-alien, as previously reported, will disguise herself as a woman of color while on Earth.

“Bree Jarta: Black, Female, 30’s. Few Lanterns take their commitment to the Corps and its purpose more seriously than Bree. Bree is half-human and it’s the half she’s worked hard to forget. Bree has an alien mother and a human father. However, she was raised on a more enlightened planet with an advanced society. Bree outworked her peers and earner her Ring only to find herself partnered with Guy Gardner.” 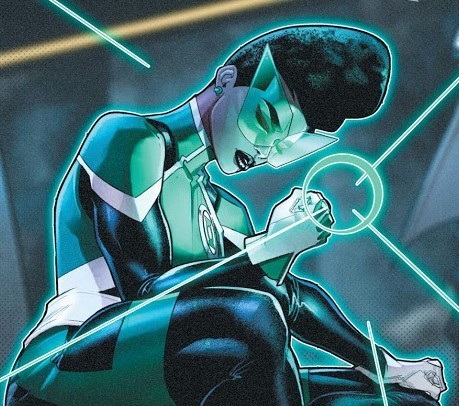 Further information regarding the HBO Max series was discovered on November 21st, as alleged breakdowns and audition tapes leaked online. Though they have since been removed from Vimeo, where they were originally posted, the videos were thankfully transcribed by Cosmic Book News.

One of the auditions reportedly depicted a scene in which Scott, pinned down by the press, is revealed to be FBI agent who’s being hailed as a hero for his recent killing of a “top mob boss”, whose new celebrity is the talk of the town.

Press: Alan, can you tell us how it all went down? Did he have any last words?

Alan Scott: Like I said, it was all over in a few seconds. We hoped to take Mr. Florentino into custody. Guess he had other ideas.

Press: What does this mean for organized crime in LA?

Alan Scott: Well, I hope there means there is less of it.

Press: Alan, are you afraid for your life?

Press: That you just killed the top mob boss in the city. Are you worried his men might try to get even with you?

Alan Scott: For what? Doing my job? Defending myself when their boss tried to kill me? The answer is no. If I worried about those things, I would be in the wrong line of work.

Press: How does it feel being called a hero?

Alan Scott: Well, I wouldn’t know since no one calls me one.

Press: Are readers to. Letters have been pouring in all week.

Alan Scott: That’s very nice, but I am no different than any of the men in the bureau.

Press: Enough with the FBI. Come one. Give us the real scoop. When are you and Ms. Everett going to tie the knot?

Alan Scott: How many times am I going to tell you, boys? It’s called a private life for a reason. Now I don’t mind you bother me, but you keep chasing Ms. Everett around with those cameras, we’re going to have to have words.

Alan Scott: Unless anybody’s got any relevant questions, I’m going to get back to work.”

Other scenes allegedly see Scott punching a fellow agent for a gay joke and being told not to not delay in starting a family. His sexuality, an eight-year-old retcon only affecting Earth-2, looks like it will play a consistently critical role in his storylines. 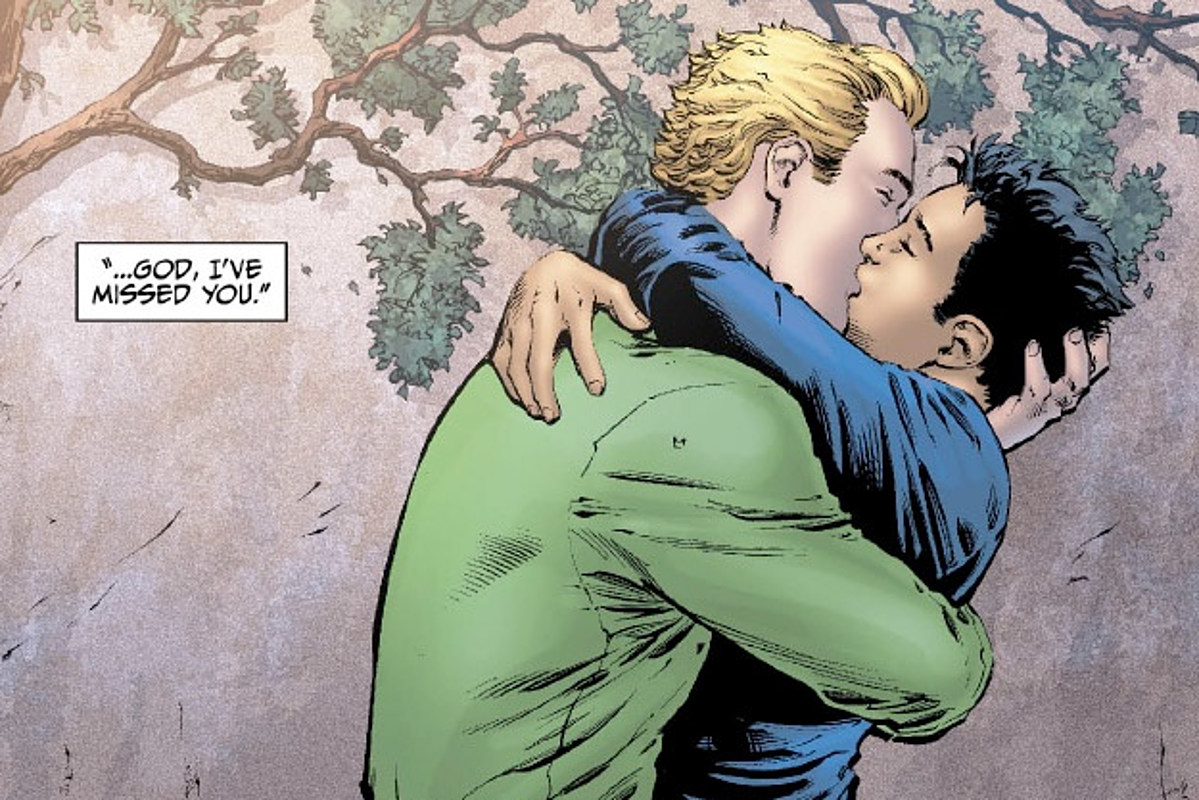 In another scene run through for a separate audition, Gardner and Jarta visit a Southern restaurant, whose owners proudly display and boast about a Confederate flag, where the latter is reportedly refused service because of her skin color. 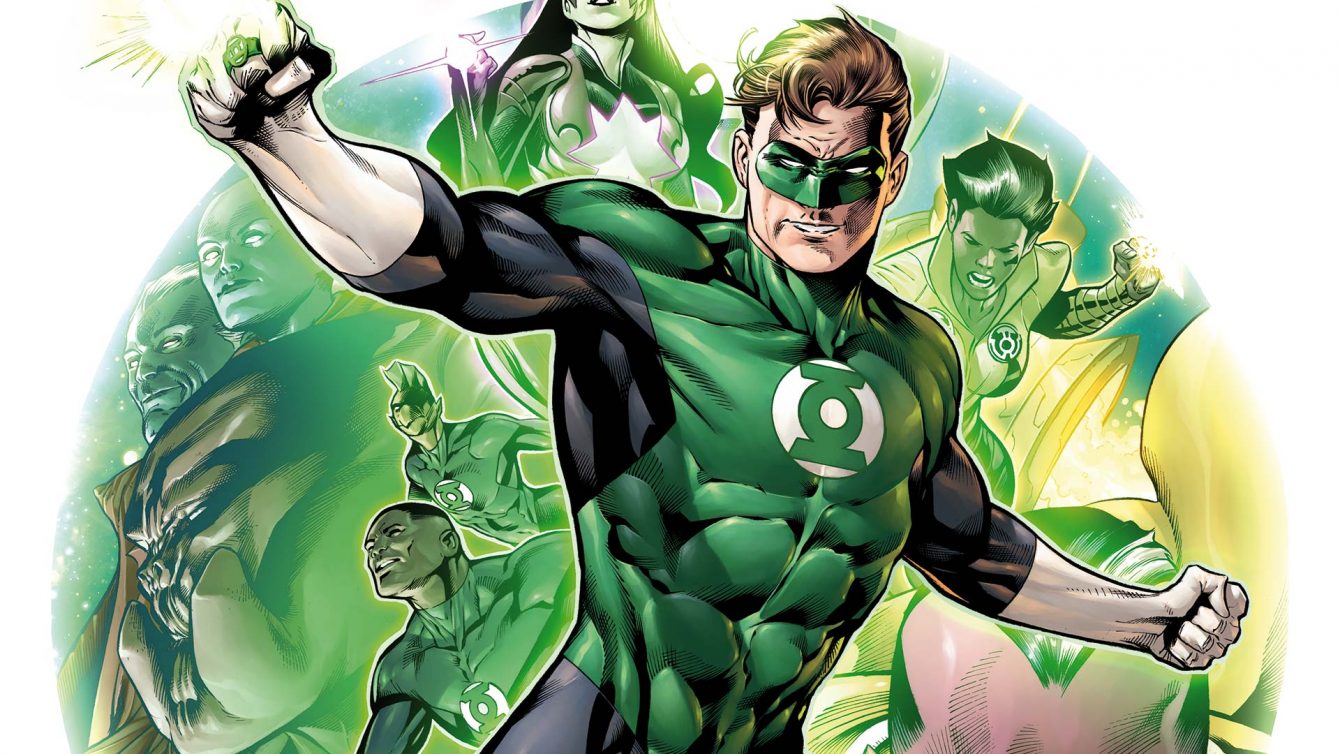 An additionally discussed scene involving Jarta teases a group of villains that may play a part in Green Lantern’s inaugural season.

Jarta, talking to a superior officer, tries to insert herself into a mission to track down the Dominators, a race of aliens who killed “several Lanterns”, out of a sense of guilt for her absence during the slaughter.

Though she claims to have key intel on the enemy, her superior keeps brushing her off, hamfistedly reinforcing the idea that  Jarta is constantly undercut and must always fight to prove her worth. 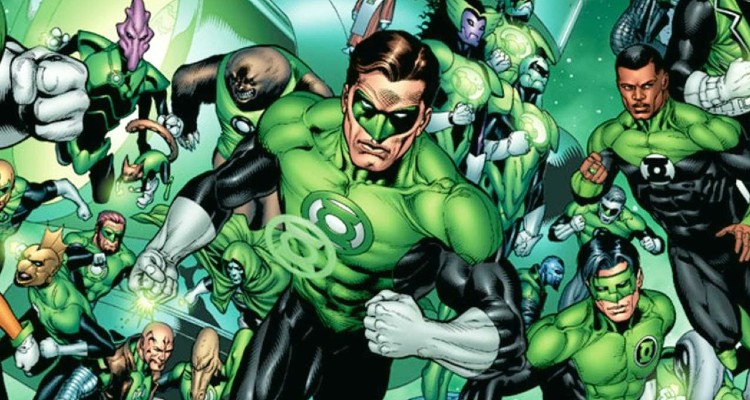 Bree Jarta: I heard you are deploying the team to go after the Dominators. I want in.

Green Lantern Corps officer: You want in? Tell me what happened out there.

Bree Jarta: Rescue mission was going according to plan. The team came upon the disabled ship. We secured the hostages. Several Lanterns died in the process. It’s all in my report.

Green Lantern Corps officer: I read your report and I am still compelled to ask what happened?

Bree Jarta: They flanked our position. We held them off until we got the hostages to safety but we were outnumbered. They came out of nowhere. There was nothing any of us could have done.

Green Lantern Corps officer: Is that all?

Bree Jarta: I managed to take the datacard off of the enemy. I know what the next target is going to be.

Green Lantern Corps officer: Thank you. This will be helpful. Dismissed.

Bree Jarta: Wait. Sir. Sir. After an attack, they tend to regroup on Vega. That’s where we can find them.

Green Lantern Corps officer: We already have that intel.

Bree Jarta: I know what their next move is going to be. I know their tactics. I understand them. I am an asset.

Green Lantern Corps officer: Or you are a liability. I just can’t take that risk.

Bree Jarta: I need to finish this. I was there. I saw what happened. Those Lanterns sacrificed themselves and I don’t want that to be in vain. They deserve justice, sir.

Bree Jarta: Sometimes those are one and the same.

The bromide at the end aside, the above scene introduces us to the Dominators. Also called Dominion, they date back to 1967 and come from the far reaches of the universe.

Though their biggest claim to fame is their part in the “Invasion!” crossover (1988) by Keith Giffen, Bill Mantlo, and Todd McFarlane, they have since been known to frequently tangle with the Legion of Superheroes. 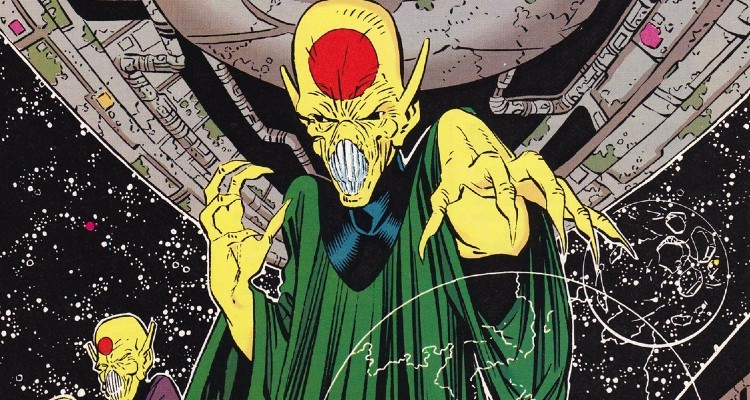 Dominators are a rigidly straified society of geneticists whose obsession with the potential of the metagene has recahed a level of eugenic zeal. They’ve also met a backlash in the past over their designs’ resemblance to “Yellow Peril” Asian stereotypes that are taboo in modern comics.

This history make them ripe to play a metaphorical stand-in for narrative commentaries on real-world racism and intolerance, which Green Lantern seems it will be sure to be replete with. However, it’s important to keep in mind that these details are all merely rumored, and so the Dominators could find themselves MIA from final drafts by the time cameras finally begin to roll. 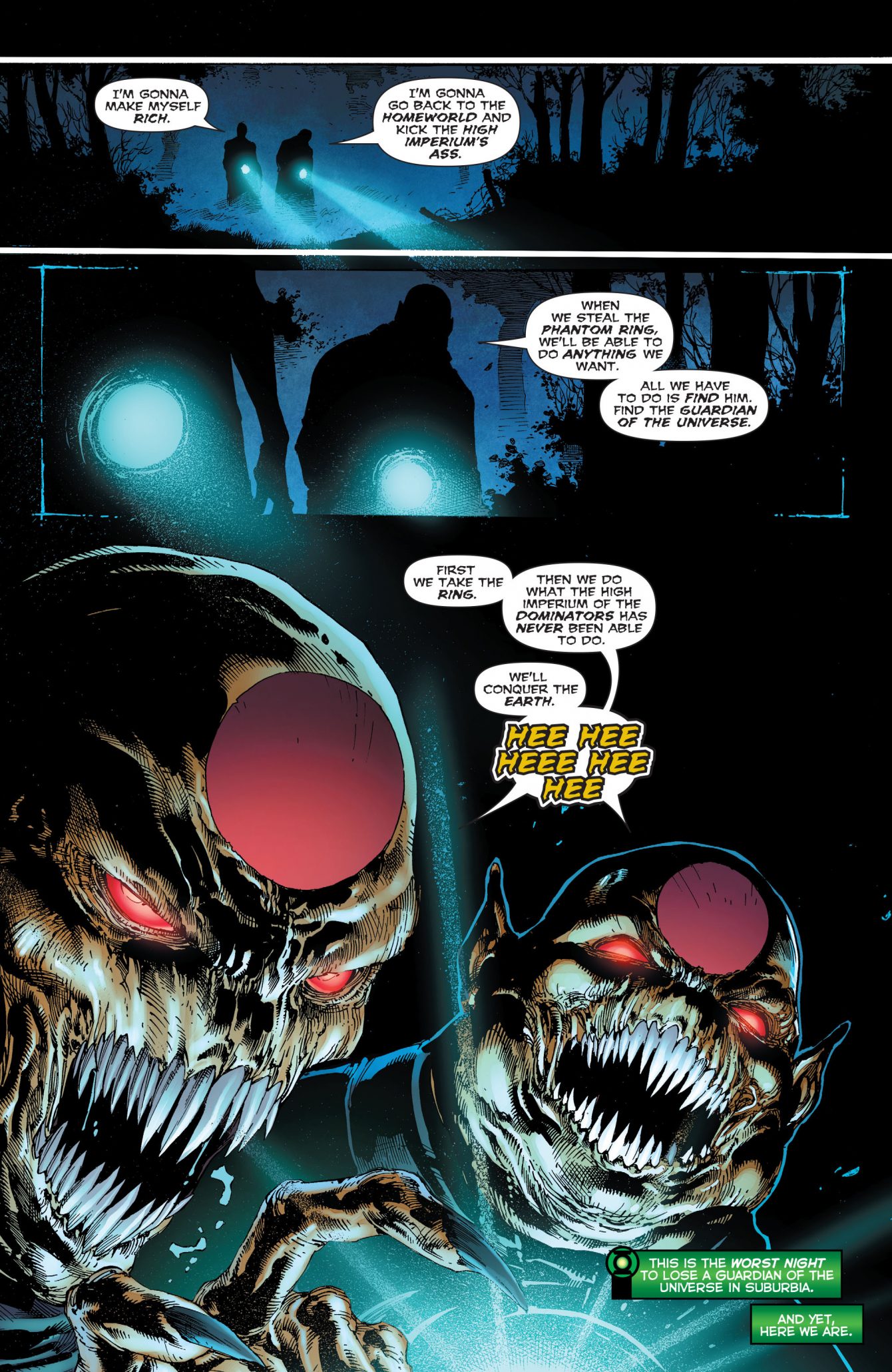 Headed up by Seth Grahame-Smith and Marc Guggenheim and co-produced by Greg Berlanti, Green Lantern doesn’t have a production start date or premiere date yet.