The report that HBO Max would be developing a new live-action Harry Potter series came from The Hollywood Reporter’s Lesley Goldberg. 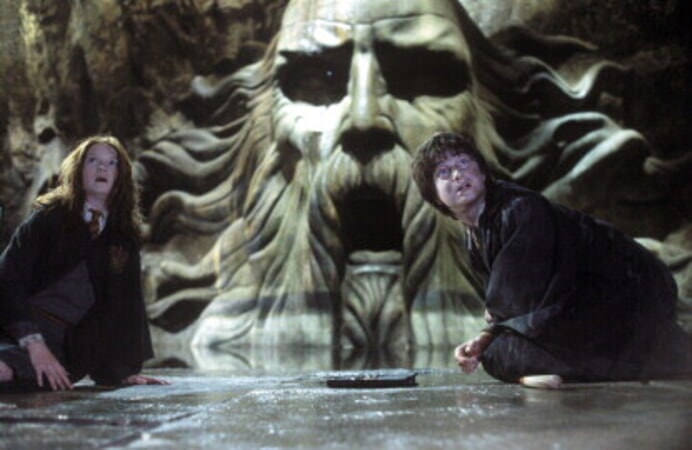 Goldberg wrote, “Sources tell The Hollywood Reporter that executives at the WarnerMedia-backed streamer have engaged in multiple conversations with potential writers exploring various ideas that would bring the beloved property to television.”

“Sources say broad ideas have been discussed as part of the early-stage exploratory meetings,” Goldberg added.

However, within their report, an HBO Max and Warner Bros. statement claimed a series was not in development.

Their statement reads, “There are no Harry Potter series in development at the studio or on the streaming platform.”

Nevertheless, Goldberg claims, “Expanding the world of Harry Potter remains a top priority for HBO Max and Warner Bros., which along with creator J.K. Rowling, controls rights to the property.” 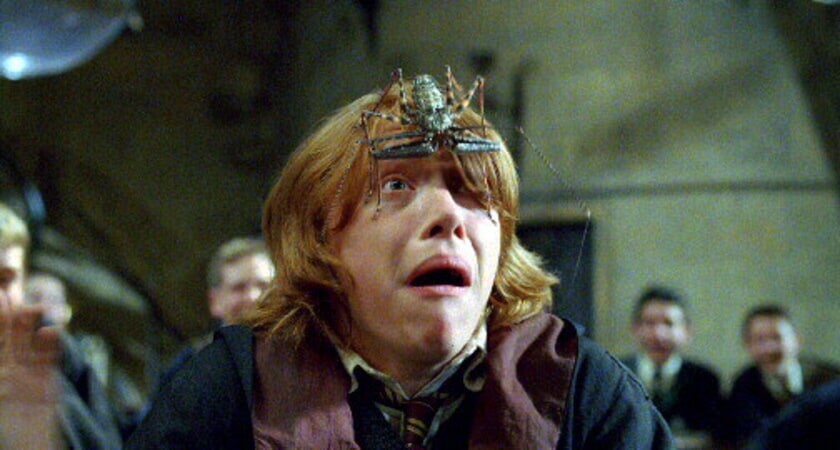 Twitter user Kevin D. Grussing wrote, “How about we not and not give that TERF JK Rowling royalties? She may not be involved, but she’s still getting $ regardless…” 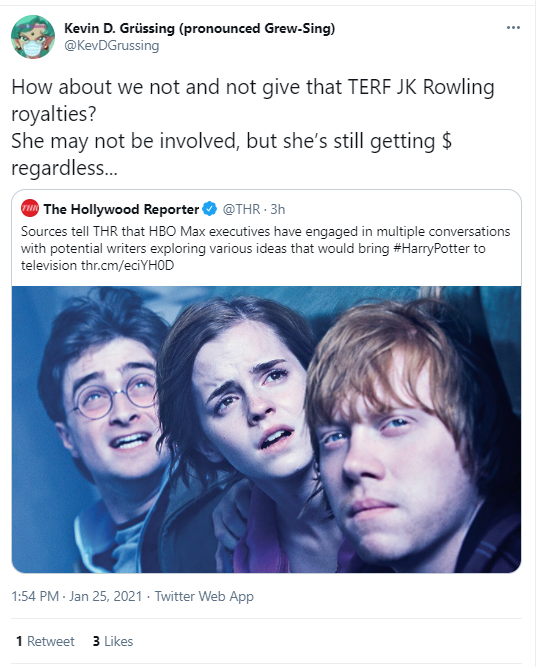 Another user wrote, “i don’t think I will ever be invested in this franchise again because of JK Rowling’s TERF a**.” 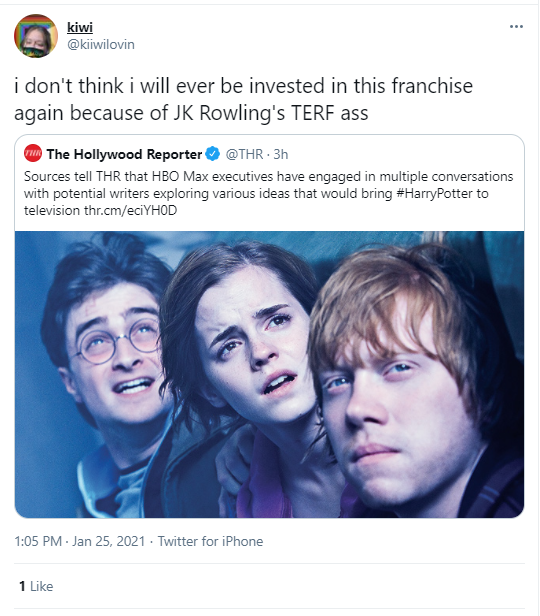 Twitter user Mildredsfierce wrote, “Harry Potter was the biggest part of my childhood and if it weren’t for the fact that JK Rowling is transphobic a**hole I would be so excited for this but really…..who’s even going to watch this now? What’s the point?” 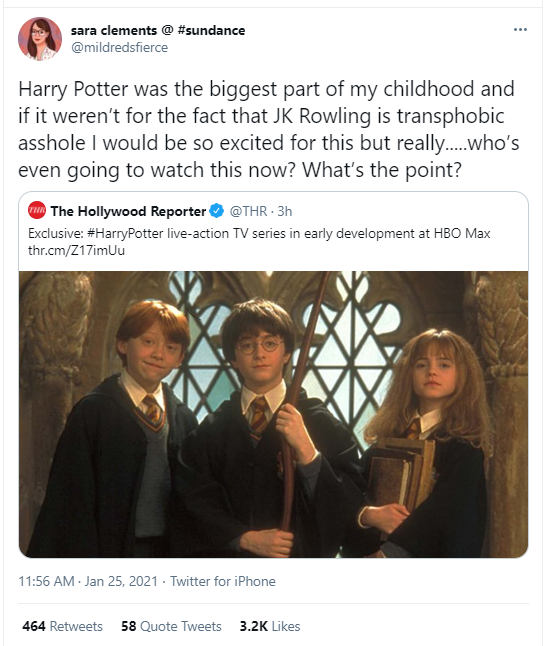 User QueerMurphys stated, “Okay see, there’s a difference between still being a Harry Potter fan/keeping your fandom mementos while also denouncing JK Rowling, and this, which is ACTIVELY giving her MORE money and not showing her any real consequences for her repeatedly HARMFUL transphobia. I’m tired.” 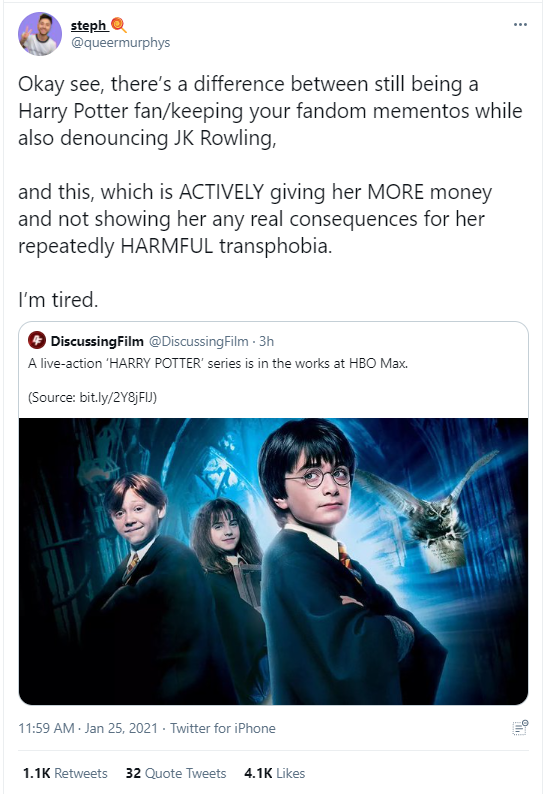 Filq2001 wrote, “L, HBO Max give Mothra a show instead of giving the transphobe work.” 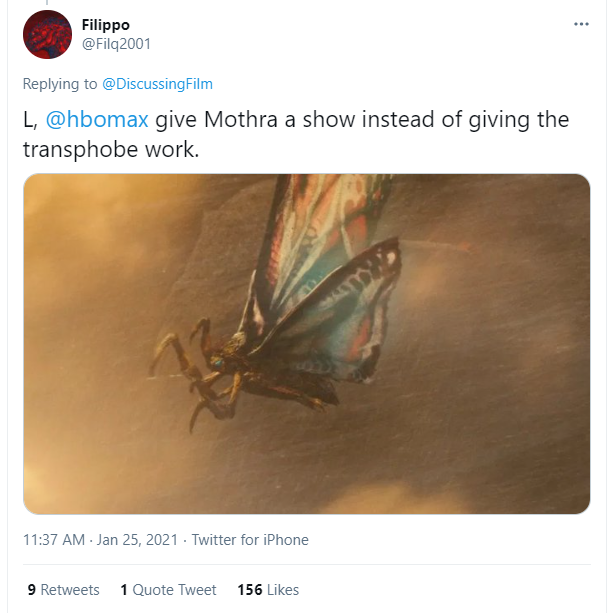 Still another user wrote, “the movies are already good and i want JK rowling on a missing person poster not behind a tv series so god pls no.” 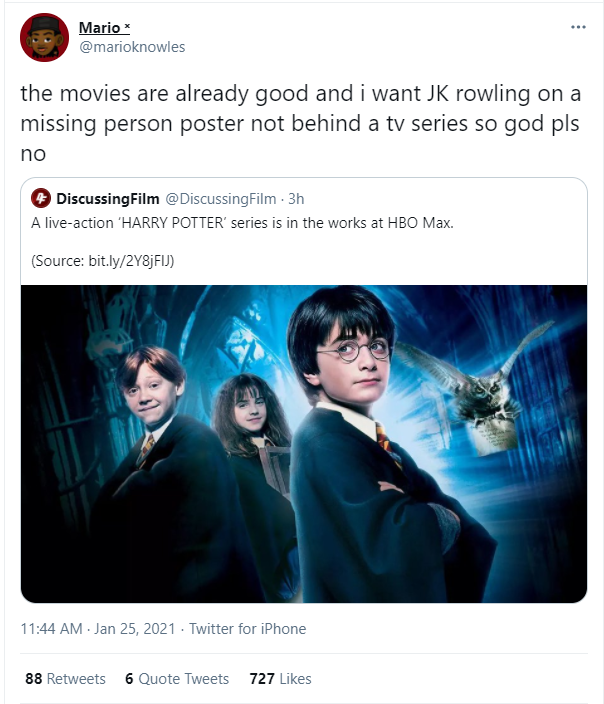 AwakeNotToday wrote, “It pisses me off beyond belief that JK Rowling is still being given money and supported for writing a book about wizards when she has proven herself to be a hateful TERF.”

The user added, “This woman is out her trying to say my gf and other women like her aren’t women and it’s a disgrace.” 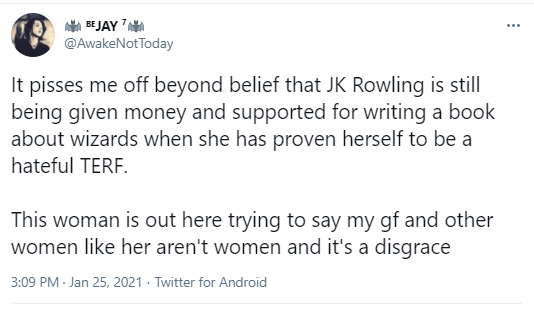 And for the last example, LeiSaysGoGays wrote, “f*** jk rowling and if you tell trans ppl to just separate the art from the artist you’re an a**hole.”

This isn’t the fist and more than likely won’t be the last time JK Rowling is attacked.

They wrote, “JK Rowling, the Donald Trump of violence against trans people, should ALSO have been banned from Twitter and deplatformed for using the platform to incite hate speech and abuse, but no one is ready for that conversation.” 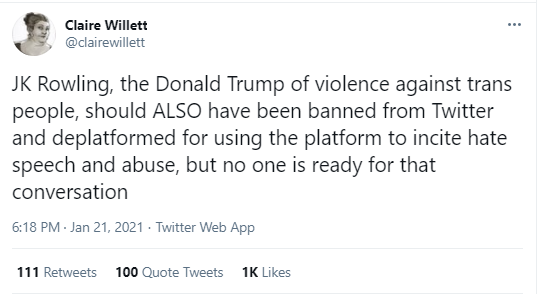 Rowling was first targeted by these Twitter activists back in December 2019 when she supported fired researcher Maya Forstater.

Rowling posted to Twitter that she stood with Forstater, who was fired from her position at the Center for Global Development after she was accused of transphobia for claiming that “men cannot change into women.”

Rowling wrote on Twitter, “Dress however you please. Call yourself whatever you like. Sleep with any consenting adult who’ll have you. Live your best life in peace and security. But force women out of their jobs for stating that sex is real? #IStandWithMaya #ThisIsNotADrill.” 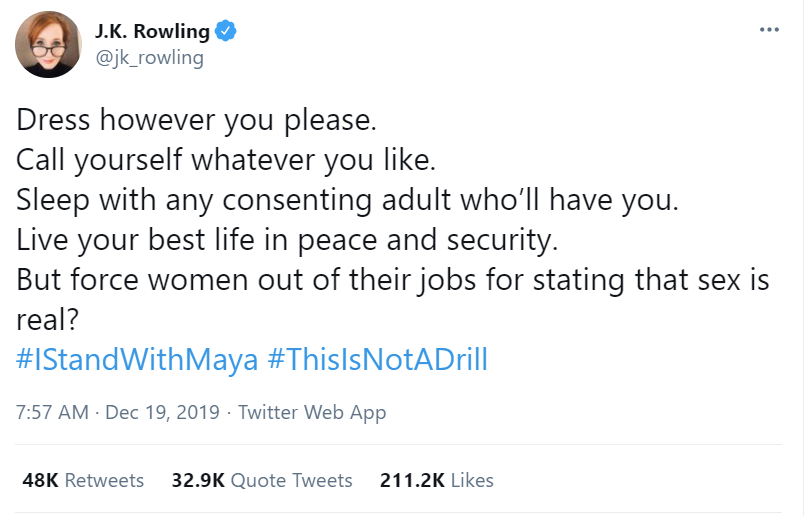 For posting this, Rowling was called all sorts of names from “a**hole” to to TERF.

In May 2020, Rowling would draw the ire of these activists again.

Sargeant posted to Twitter, “This is Alex Drummond, an adult human male who claims to be a lesbian (yes, he’s kept his dangling bits & has skipped the homrones) and believes that real lesbians who aren’t into penises are transphobic and should be excluded from the lesbian community. Yeah. this guy.” 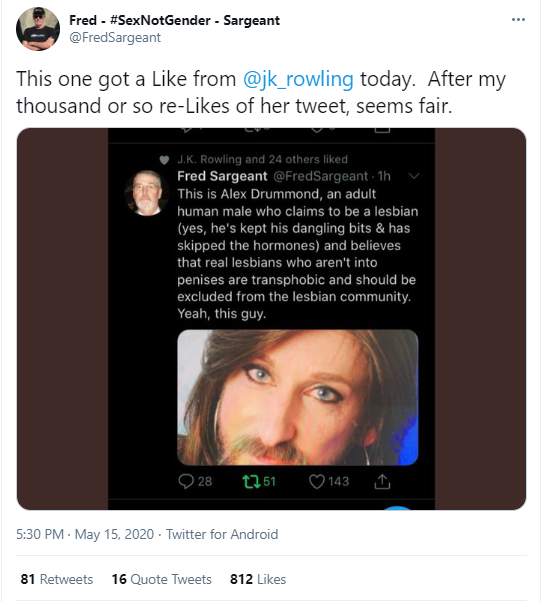 In June, Rowling would then be targeted by GLAAD and the company’s head of celebrity talent Anthony Ramos.

Ramos via Variety stated, “J.K. Rowling proactively spreads misinformation and has refused conversations with LGBTQ leaders who merely want to have a dialogue and let her know the negative impact that these tweets have.”

“A generation raised on J.K.’s own books about embracing differences is now making their voices loud and clear and if she refuses dialogue, then companies that partner with her should tell the community where they stand,” Ramos continued.

Ramos then concluded, “Studios, networks, and brands affiliated with J.K. Rowling owe it to their transgender employees and consumers to speak out against her inaccurate and hurtful comments.”

Ramos’ comments came in response to a series of tweets from Rowling defending biological sex.

The Harry Potter author wrote, “If sex isn’t real, there’s no same-sex attraction. If sex isn’t real, the lived reality of women globally is erased. I know and love trans people, but erasing the concept of sex removes the ability of many to meaningfully discuss their lives. It isn’t hate to speak the truth.” 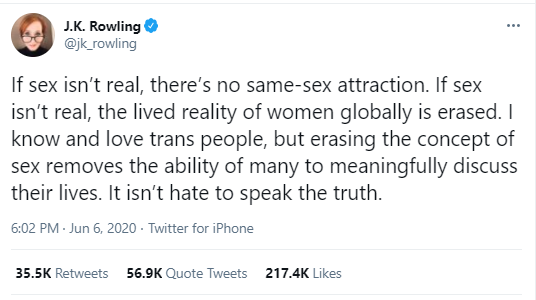 Next, she wrote, “The idea that women like me, who’ve been empathetic to trans people for decades, feeling kinship because they’re vulnerable in the same way as women – ie, to male violence – ‘hate’ trans people because they think sex is real and has lived consequences – is a nonsense.” 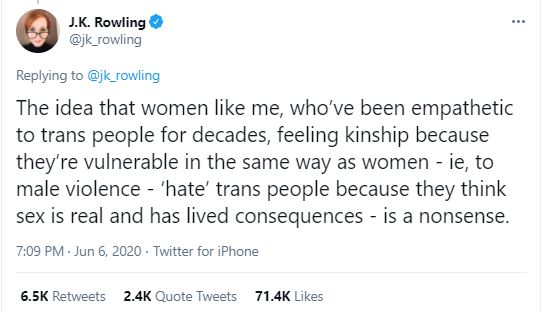 She concluded, “I respect every trans person’s right to live any way that feels authentic and comfortable to them. I’d march with you if you were discriminated against on the basis of being trans. At the same time, my life has been shaped by being female. I do not believe it’s hateful to say so.” 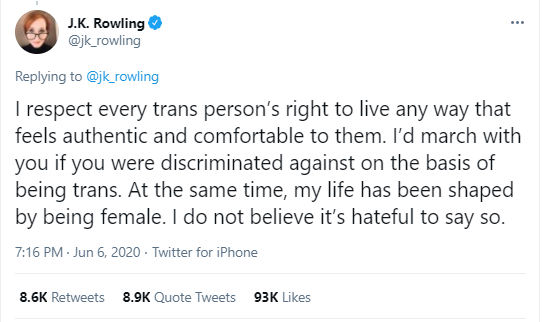 **Editor’s Note: This article has been updated to make it clear that Claire Willett’s tweet was made before The Hollywood Reporter claimed a Harry Potter live-action series was in development for HBO Max.**