Psychologist Gad Saad reported his recent article on Psychology Today regarding the moral hypocrisy of  celebrities has been unpublished with no reason given.

Saad took to Twitter to share an email he received from Psychology Today informing him that the article had been unpublished.

He wrote on Twitter, “I’m at a loss for words. Psychology Today. The article in question had become one of the most popular on the site in roughly 30 minutes since posting. It was taken down without ANY explanations.”

The email he received reads, “The following action has been taken on your blog post The Moral Hypocrisy of Celebrities. Action: Blog Post Unpublished. Reason: Other. Note: This post has been temporarily unpublished and is undergoing editorial review. We will follow up with further information shortly. Thank you for your patience.” 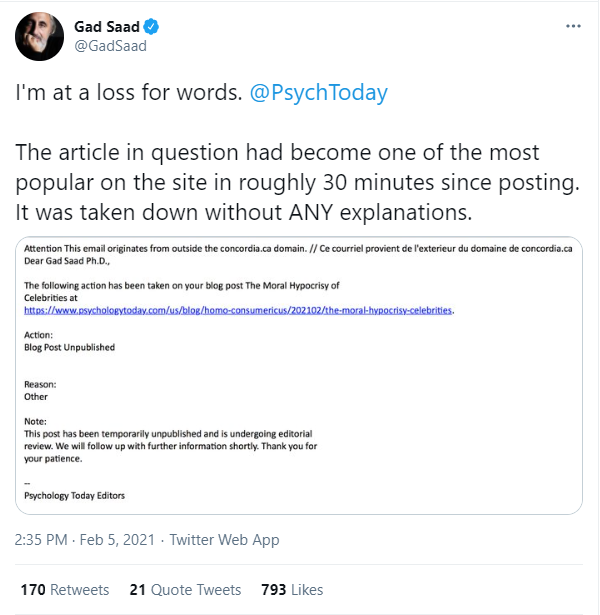 When attempting to access the article, it has indeed been removed from Psychology Today. 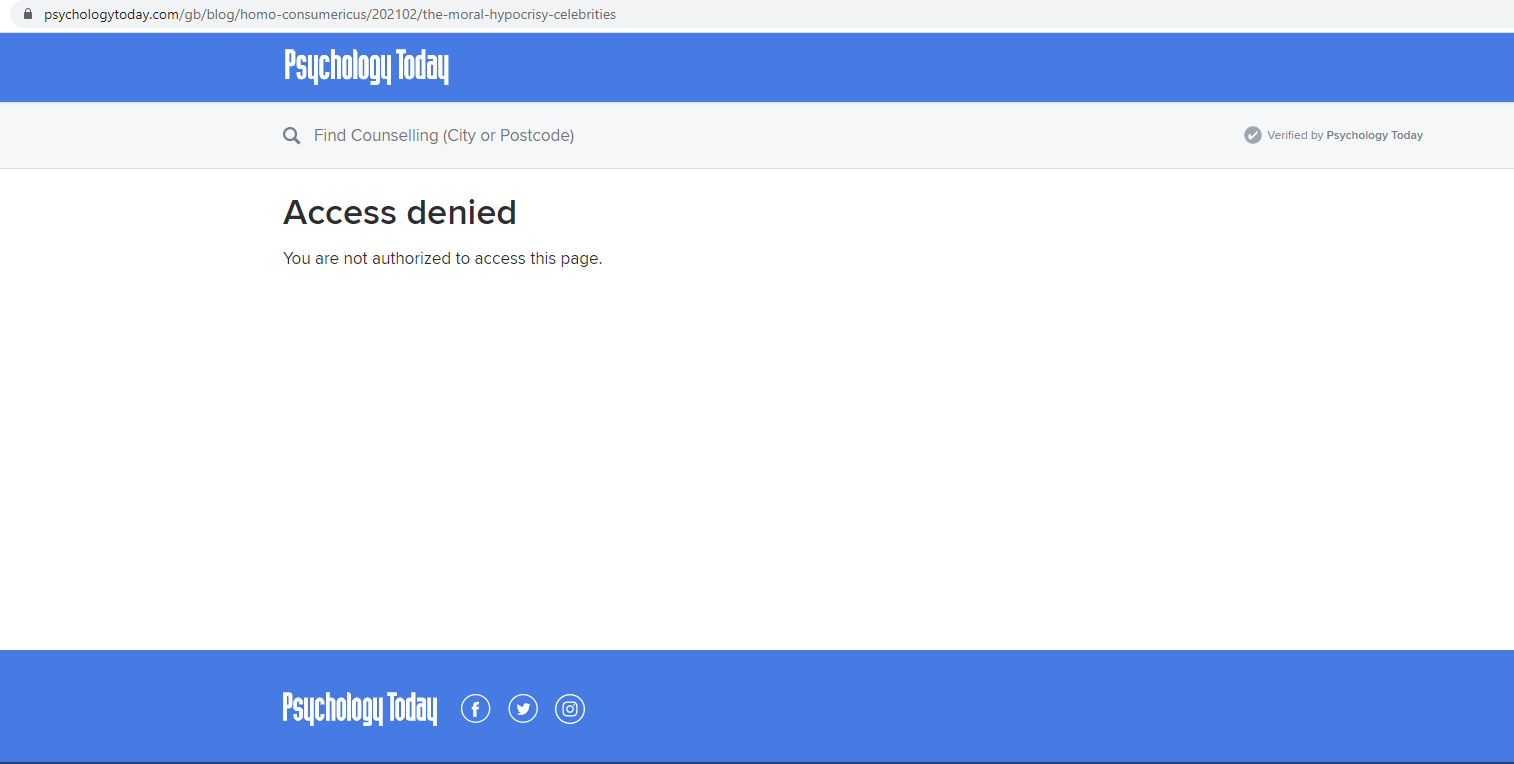 The unpublishing of the article came after Saad obliterated Hollywood elitist Seth Rogen on Twitter as first reported by YouTuber SC Reviews.

Posting to the social media platform on January 31, Saad wrote, “Let me explain yet again the source for all of the platitudinous virtue signalling. The truly privileged elites know that deep down they are frauds. They suffer from existential guilt.” 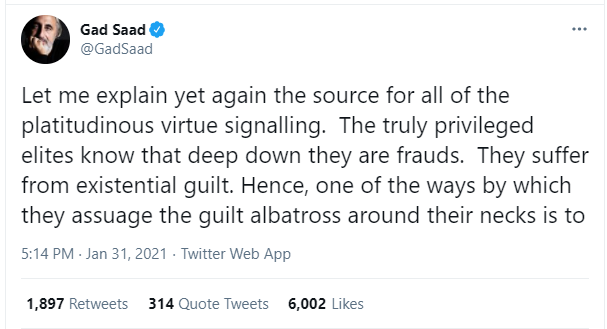 He continued, “Hence, one of the ways by which they assuage the guilt albatross around their necks is to demonstrate to the world that they are truly compassionate, truly loving, truly caring, truly profound. Hence, they love all “undocumented” immigrants. They love Mother Earth. They love the ozone layer. They love BLM. They love socialism. They love inner cities.” 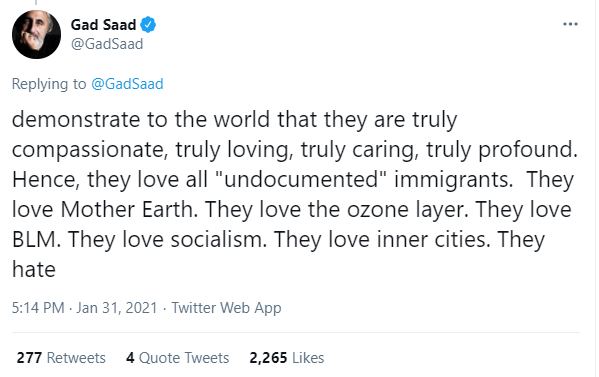 “They hate the gentrification of neighbourhoods. They love mentors of color. They cherish diversity. They love LGBTQ movies. They adore queer architecture. They are better than you. More caring, more cultured, more empathetic. This permits them to sleep better at night,” he added. 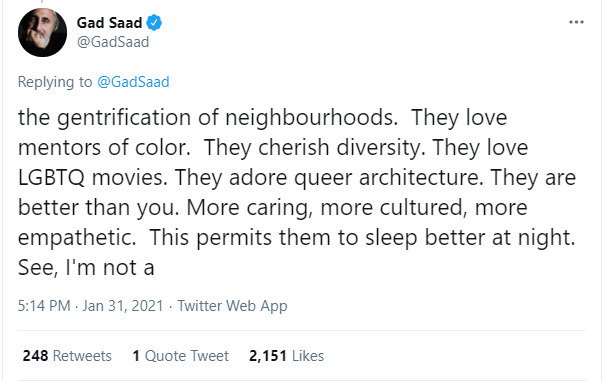 He then wrote, “See, I’m not a fraud. I may be a gargantuan parasitic hedge fund bullshitter but I really care. I may be an overpaid BS actor but I fight for solar panels.”

Saad concluded, “Those fly over rubes deserve their lot in life. They are racists who bed their siblings. We are science supporters who fight against Mother Earth rapists whilst flying in our private jets. It is a classic ego defensive strategy that permits the ruling class to exist within their fractured selves. Save this thread. Memorize it. I’m offering you a deep psychological explanation of our times.” 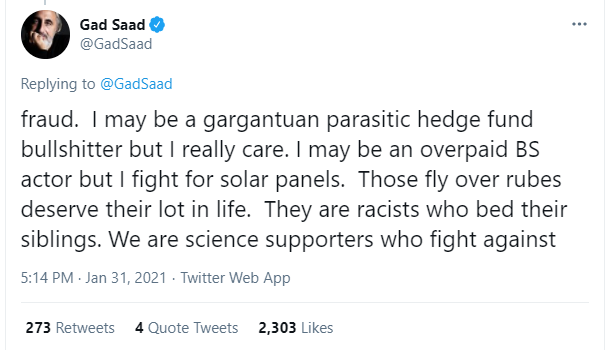 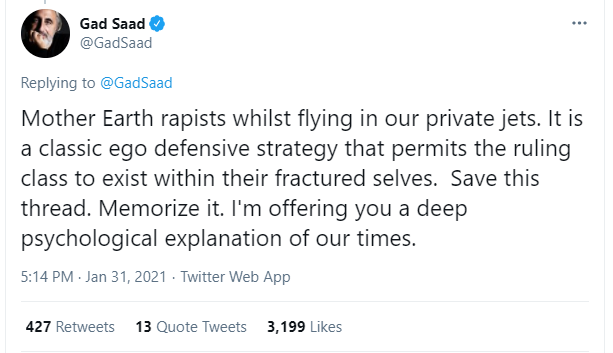 When one of Saad’s followers alerted Rogen to the thread, Saad preemptively tweeted, “Oh Seth Rogen is a CLASSIC example of what I discuss here:

In the video, Saad states that celebrities “suffer from a form of existential guilt.” He continued, “They know that deep down they are frauds who don’t deserve the adulation and wealth and prestige that is accrued to them so they save the world. They save the environment. They create a more tolerant society. It’s all complete nonsense. But it makes them be able to sleep better at night.”

He then proceeds to read what he wrote in the tweets above. He does conclude the video stating, “If decent people don’t wake up against what is taking place you will wake up and say, ‘What happened to my liberties? What happened to my freedoms? Why do I no longer live in a true democracy? I keep warning you, don’t sit idly, don’t subcontract your voice to others. Get engaged in the battle of ideas.”

Rogen, being the Hollywood elitist that he is, weighed in on the thread stating, “I actually watched your video and it’s so stupid. Why was I a left wing socialist when I was broken and unemployed according to your brilliant theory?”

Saad proceeds to obliterate Rogen. He writes, “Thanks for watching. Many young people are socialists when they are driven by immature impulses of utopia. They then grow up.”

He continued, “You are a grown man with tons of money. Your current stances are rooted in vacuous empty signalling rooted in a desire to belong in Hollywood.” 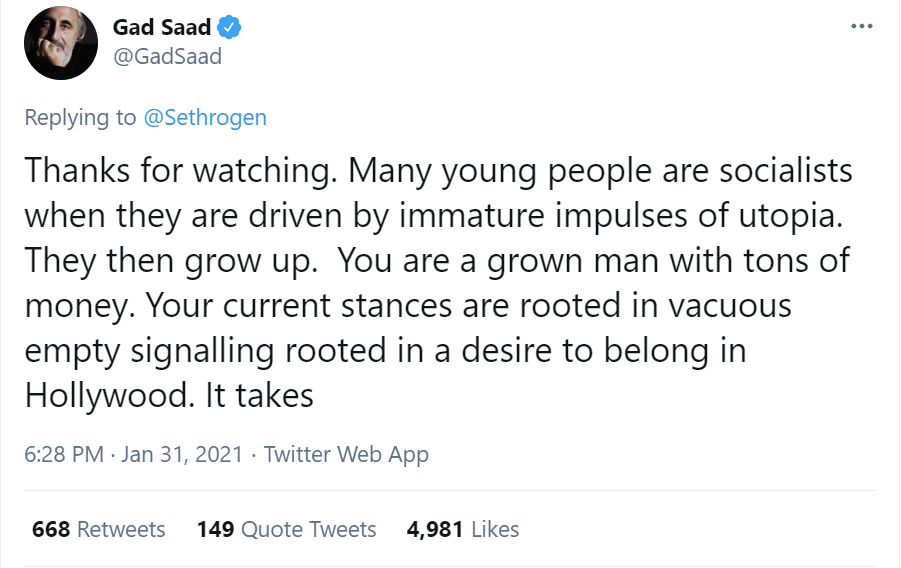 “It takes zero courage to hold your stances within the entertainment ecosystem. You espouse bullshit rhetoric that wins you points at the cool kids’ parties but you are otherwise as ignorant as my out-of-order toaster,” Saad added. 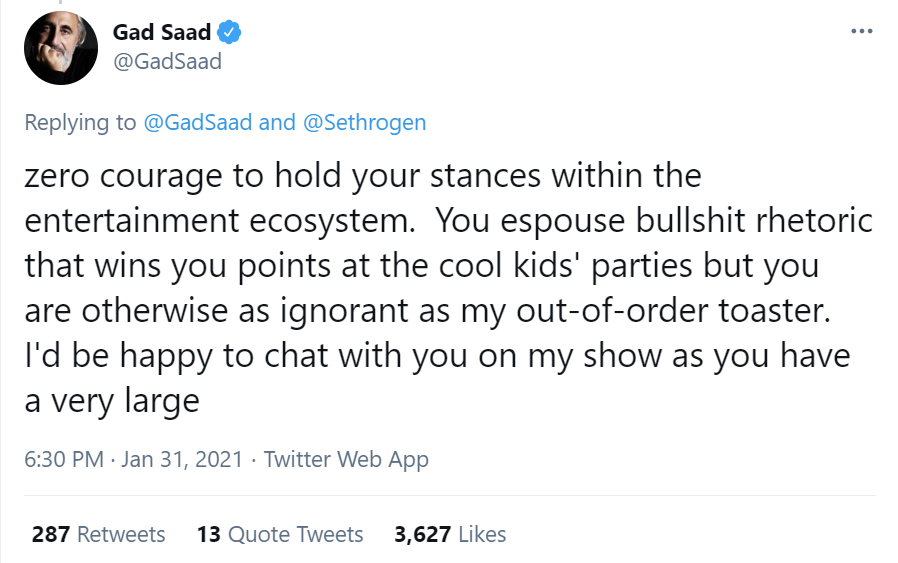 The psychologist then proceeded to challenge Rogen to appear on his show, “I’d be happy to chat with you on my show as you have a very large platform and as such you have the opportunity to actually make a difference.”

Saad concluded, “Stop succumbing to the herd mindset. Learn how to think critically. Learn the meaning and implications of socialism vs. capitalism. You are among the MOST privileged people in the history of humanity.” 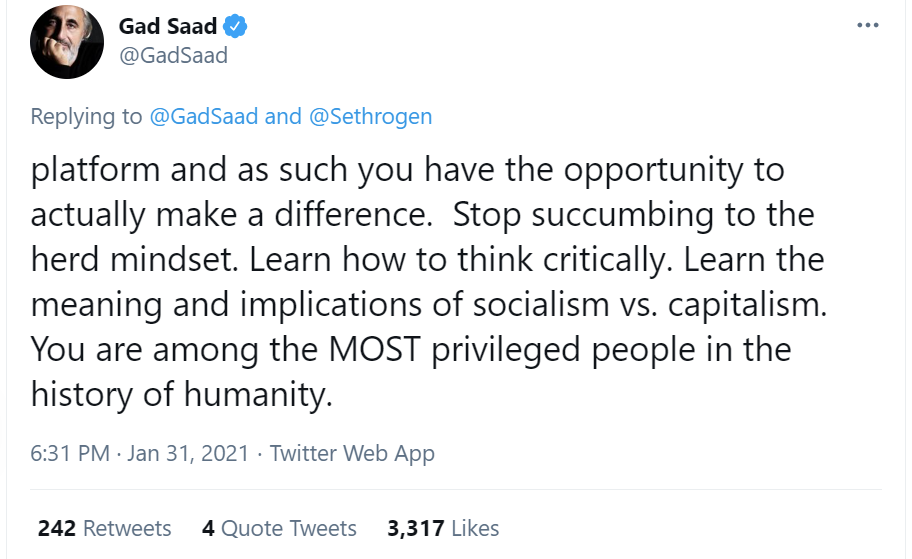 Rogen playing right into Saad’s hand wrote, “It must be weird to do your best to try to act way smarter than someone and simultaneously beg them to come on your podcast because you need publicity.”

Saad then continued to embarrass the Hollywood elitist, “Beg them, no Sugar. I offered for you to come on my show because you do have a large platform from which you can do great things. I am epistemologically well-calibrated. I know what I know and what I don’t know. I am sure that there are tons of things that you can teach me.” 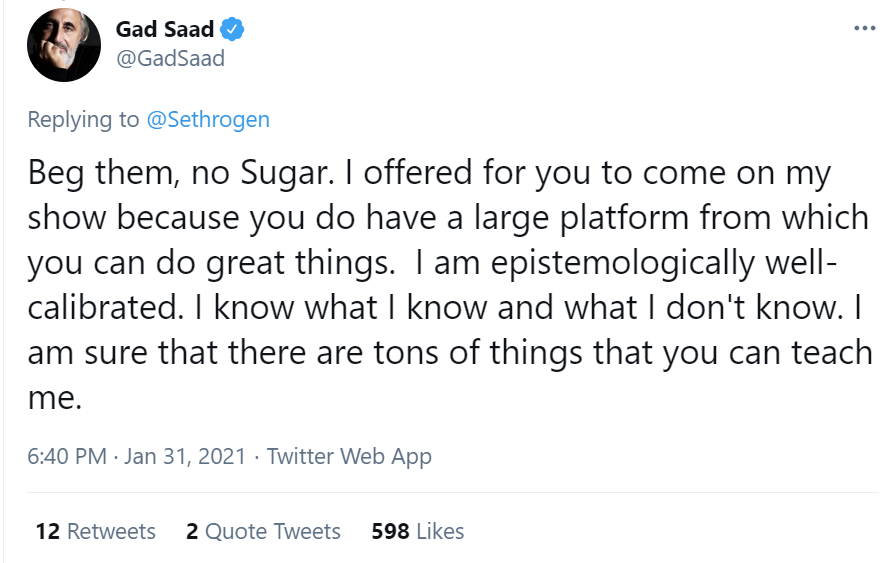 He added, “Similarly, I am certain that there are many topics on which you might learn from me. I have spent my career on academia so I know one or two things but I’m always happy to engage people from all walks of life. I appreciate your movies.” 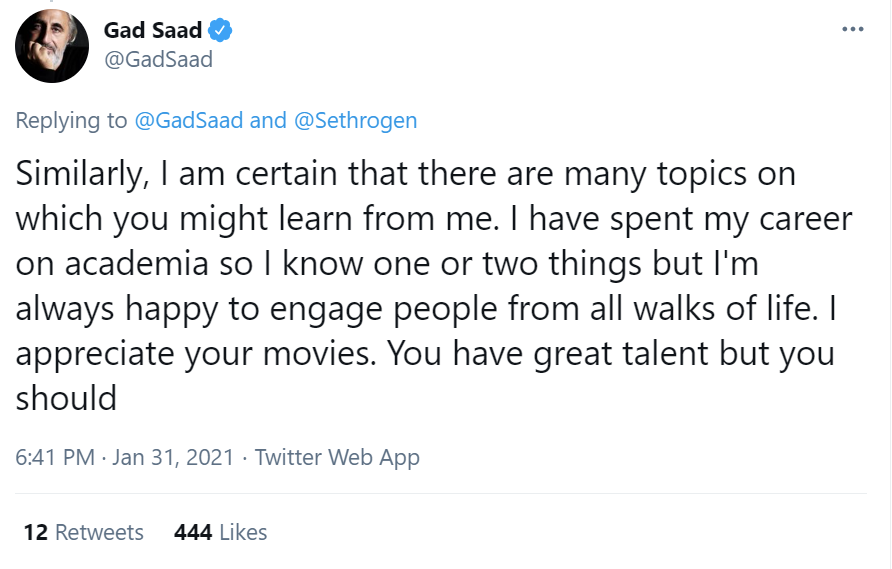 “You have great talent but you should be humble enough to be willing to engage folks who do not share your utopian hypocrisy,” Saad stated.

He then eviscerated Rogen writing, “A wealthy rich actor who proclaims that he is a socialist is a naturally lobotomized schmuck. I’m happy to educate you in the same way that I’m delighted when you entertain me. Follow or should I type slower for you?” 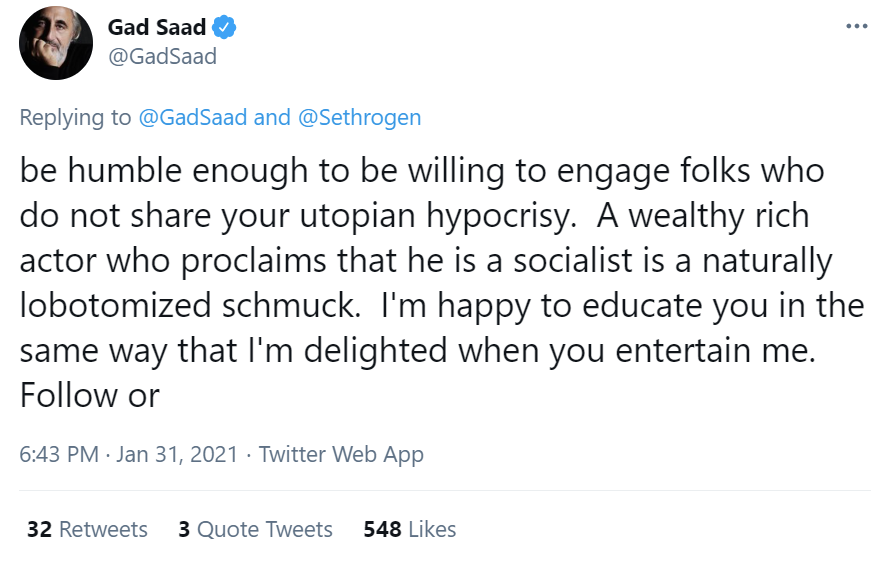 Finally Saad concluded, “I’d much rather have a chat with a real actor like Clint Eastwood but you are Canadian so I’m trying to be inclusive. My castrato. I like you. Stay cool.” 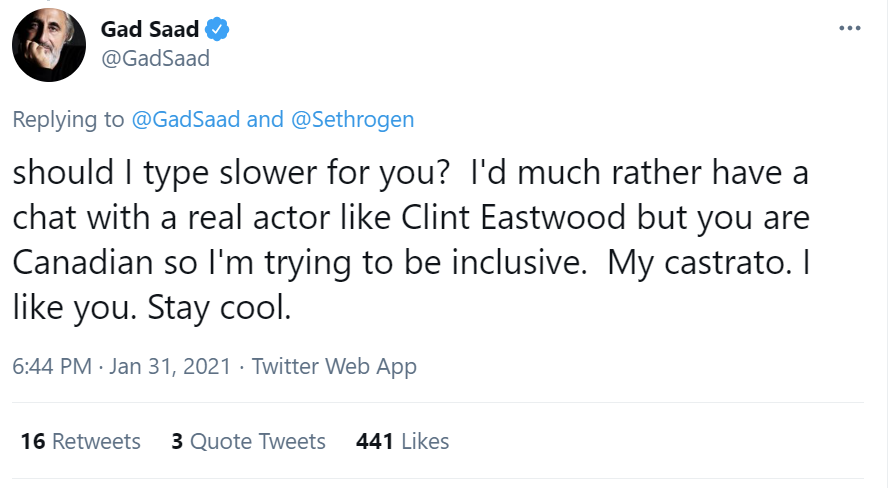 What do you make of Saad’s brutal takedown of Seth Rogen? Do you think his takedown of Rogen is connected to Psychology Today unpublishing his most recent article regarding celebrities?